The GG1 electric is one of the most iconic locomotives (steam, diesel, or electric) of all time.  Sporting a beautiful streamlined design it not only looked good but it also performed exemplary, reaching speeds above 100 mph.

The fleet largely remained in service for nearly 50 years and went through several owners.  During their peak service years the locomotives

During this time the locomotives carried all of the Pennsylvania's crack trains up and down the Northeast Corridor, from the Broadway Limited and General to regional services such as the Congressionals and Senator.

The motors also handled a multitude of other railroads' trains which provided connections to New York, names like the Champion, Silver Meteor, and Crescent.

In many ways the “G” became the face of the Pennsy herself; newer locomotives would eventually retire the last GG1 in 1983 (operated by New Jersey Transit) but the locomotive’s legendary status has not diminished. 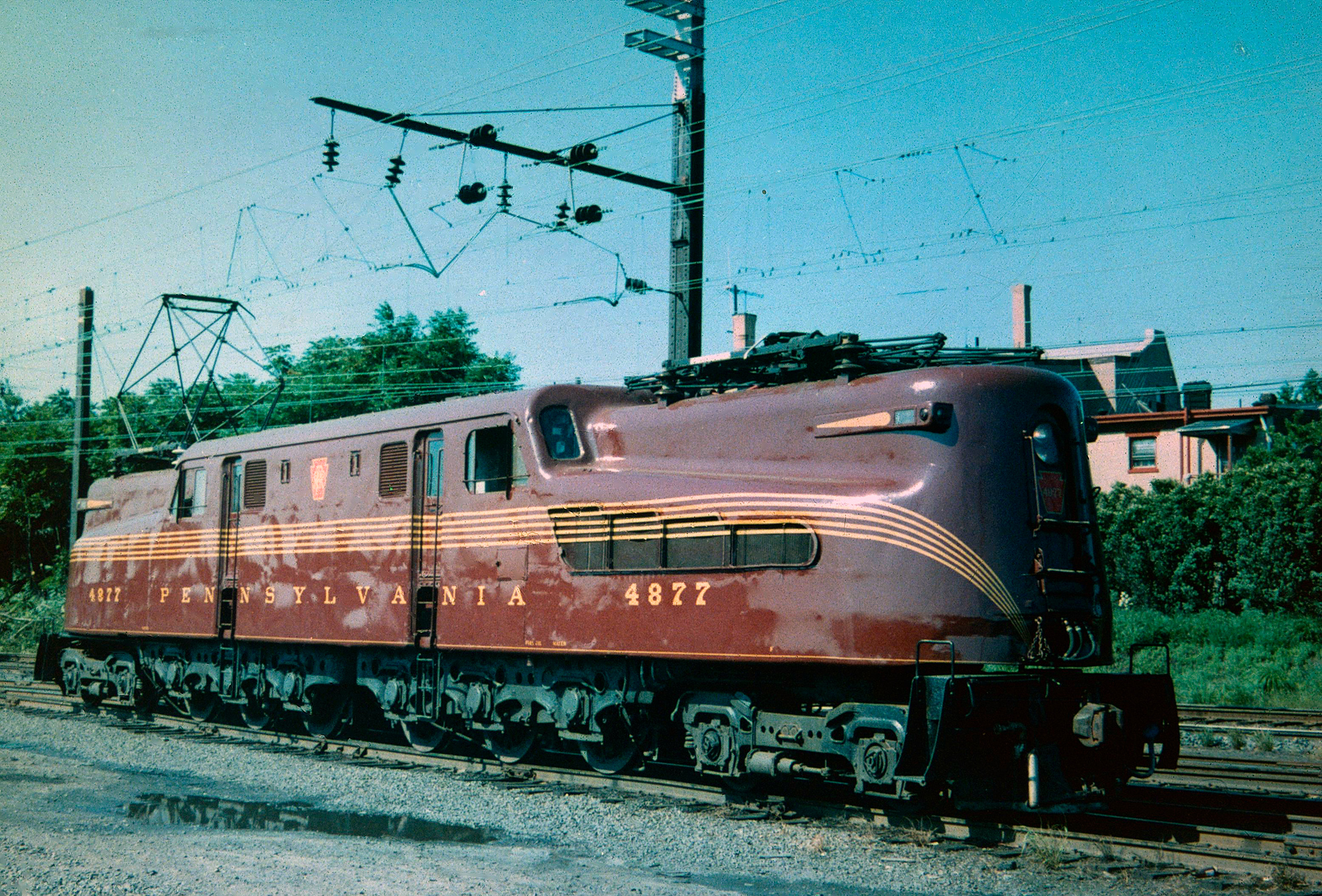 Today, several GG-1's have been preserved around the country.  The question is often asked, will one ever run again? The simple answer is no.

The locomotives utilized Polychlorinated Biphenyls (PCBs) as the cooling oil for the transformer units, a highly toxic material.

In addition, it was discovered in later years the locomotives' frames had experienced significant cracking after decades of service.  Alas, it would likely be cheaper to simply rebuild a GG-1 from scratch than attempt a restoration on a preserved unit.

The GG1 has its beginnings as PRR's P5 class of electrics. These motors were intended for use in high-speed passenger service along the Northeast Corridor (NEC).

However, they never lived up to their lofty expectations and suffered from reliability and traction motor issues; carrying a 2-C-2 wheel arrangement, their high torque via dual traction motors caused heavy damage to the axles.

As a result, the PRR eventually bumped them to freight assignments.  Still hunting for a reliable, fast, and efficient main line passenger electric, the Pennsylvania turned to the New Haven’s EP-3 boxcabs for help.

The EP-3 design was very reliable and did not suffer from the traction motor issue.  Working from this design the Pennsylvania built two experimentals for testing: 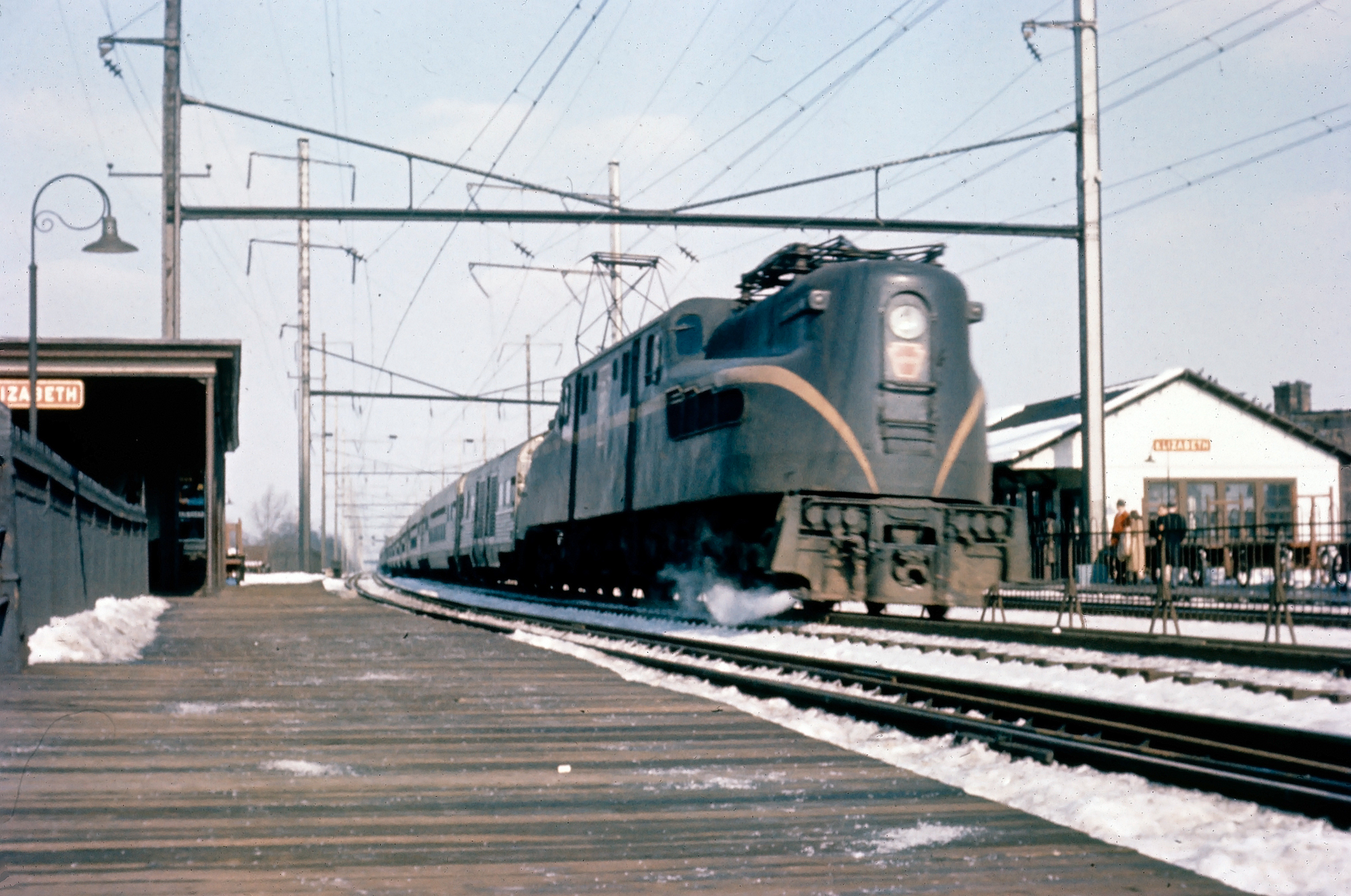 Both locomotives featured a center-cab, bi-directional, setup. However, the GG1 quickly proved it was the superior motor and was ultimately selected by the PRR to replace the P5.

The GG1 included a continuous rating of 4,680 horsepower, which could sometimes peak as high as 10,000 horsepower, giving the locomotive impressive acceleration and traction.

The initial exterior design was rather unappealing; the carbody featured a boxy appearance with riveted sheet metal around the frame. 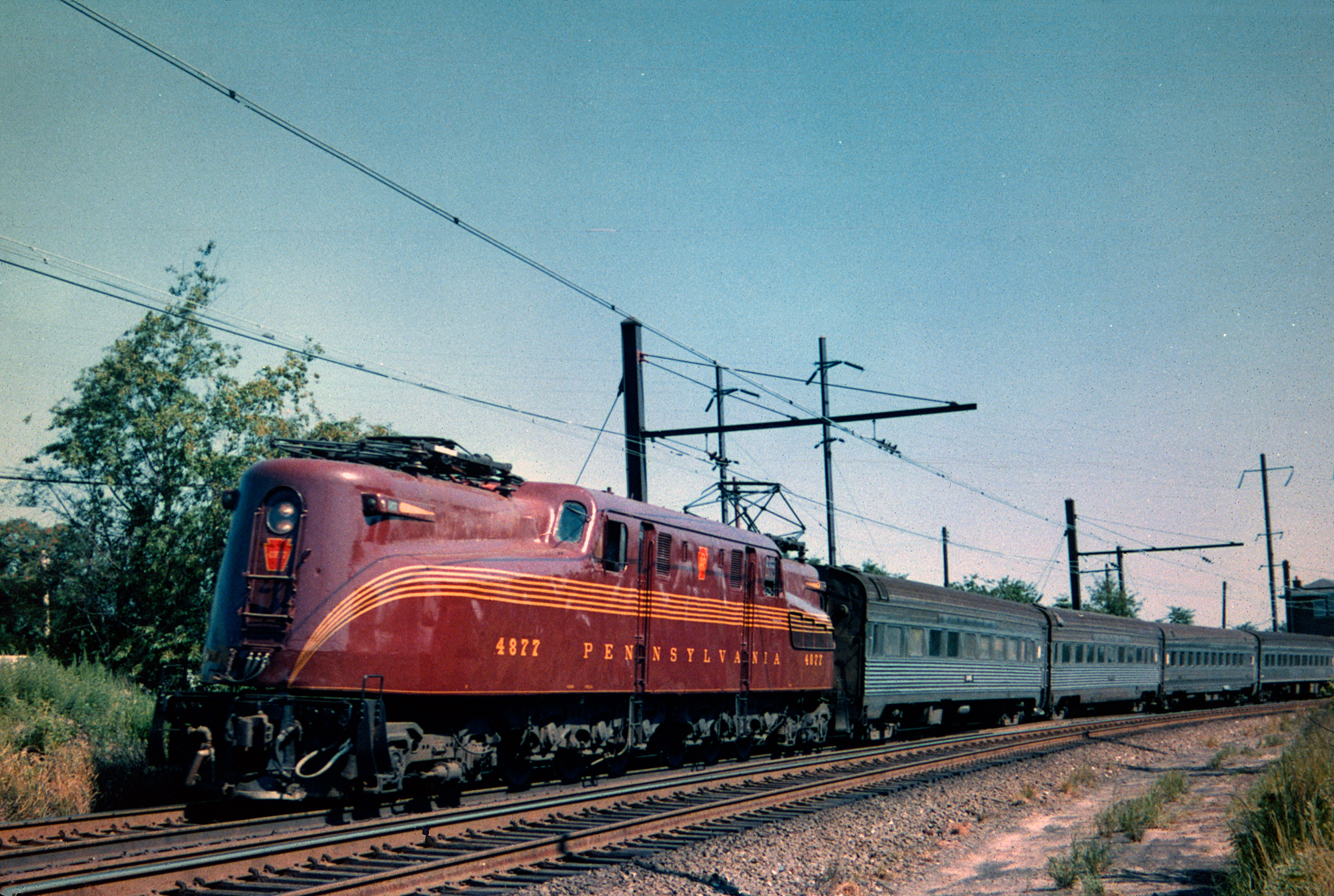 Wanting the locomotive to have a classier and more streamlined look, the Pennsylvania hired renowned industrial designer Raymond Loewy to improve her looks (Loewy was also hired for several PRR projects, including fashioning the railroad’s famous Broadway Limited).

While his touches were subtle, they were perfect. Loewy suggested the carbody be welded rather then riveted, giving the locomotive a more contoured look while also adding more beveling.

As a final touch, Loewy suggested the now famous "cat whisker" pinstriping, a scheme that was later widely used on other PRR equipment. 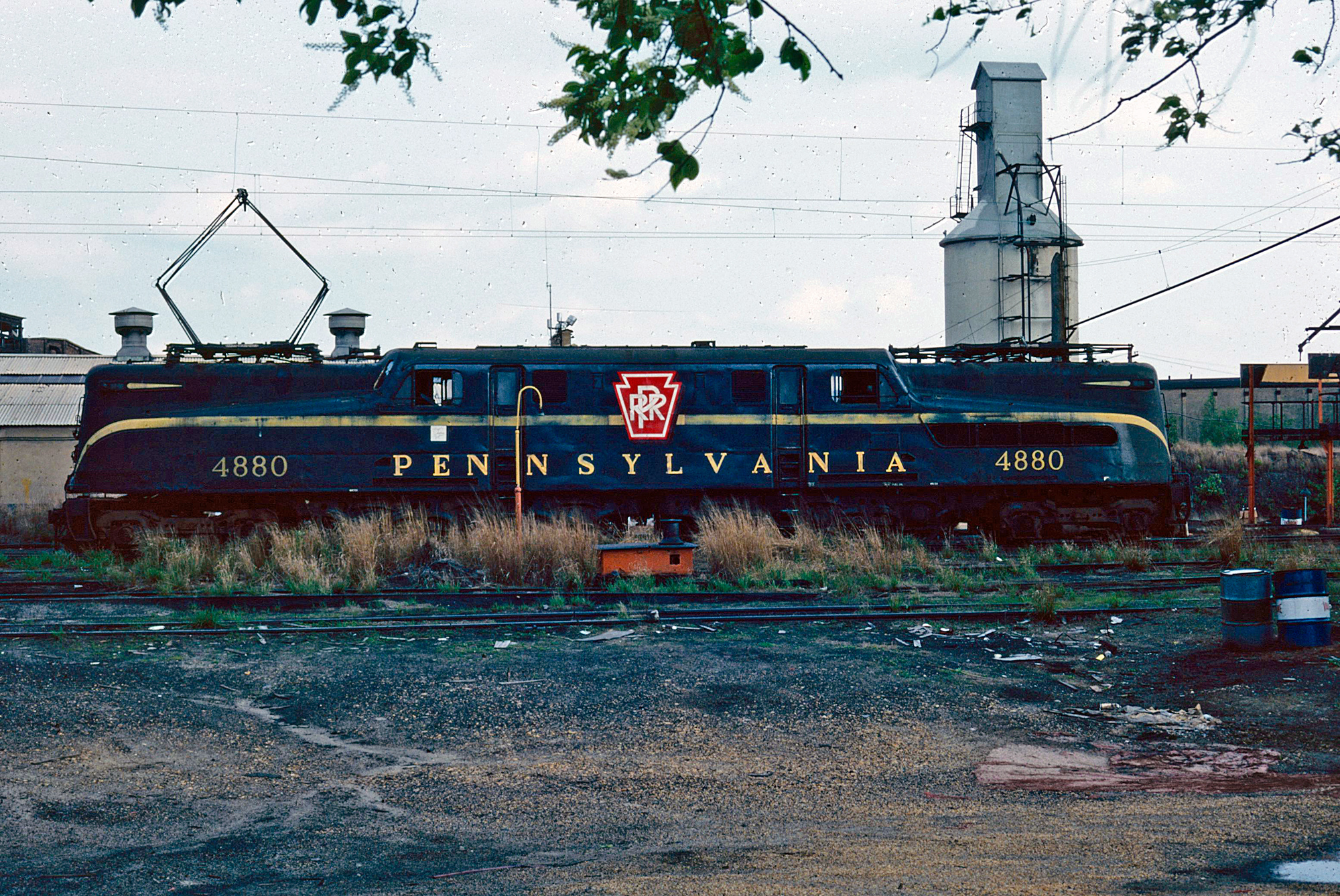 Because of their speed and reliability, the Gs were loved as much by the crews that operated them as the general public who watched them from trackside.

Following their 1935 debut, one could watch GG1s leading the Pennsylvania’s most prestigious passenger trains for decades.

Beginning in the 1950s some GG1s transitioned to freight service and proved quite adept in these assignments.

Following Penn Central's creation on February 1, 1968, the Gs’ days became more uncertain. While still in daily use, the fleet was painted in an ugly and simple black dip livery with the "PC" mating worms logo largely displayed on the carbody.

Following Penn Central's collapse and Conrail's creation (April 1, 1976), the Gs were slowly sold off or retired; all were off the roster by 1979.  The last GG1 in active service operated on the New Jersey Transit on October 29th, 1983.

It ran as far as South Amboy, New Jersey where a locomotive change took place.  The next day all three units pulled three round-trip excursions between Matawan and Newark, New Jersey, officially ending the GG-1's service history after nearly 50 years of operation.

*** Sold to the Baltimore & Ohio Railroad Museum on March 20, 1981; acquired by the  National Railroad Museum in Green Bay, Wisconsin in 1995; preserved indoors and presented in Tuscan red with pinstripes.

* Significant as the GG-1 which crashed through the floor of Washington Union Station in 1953. 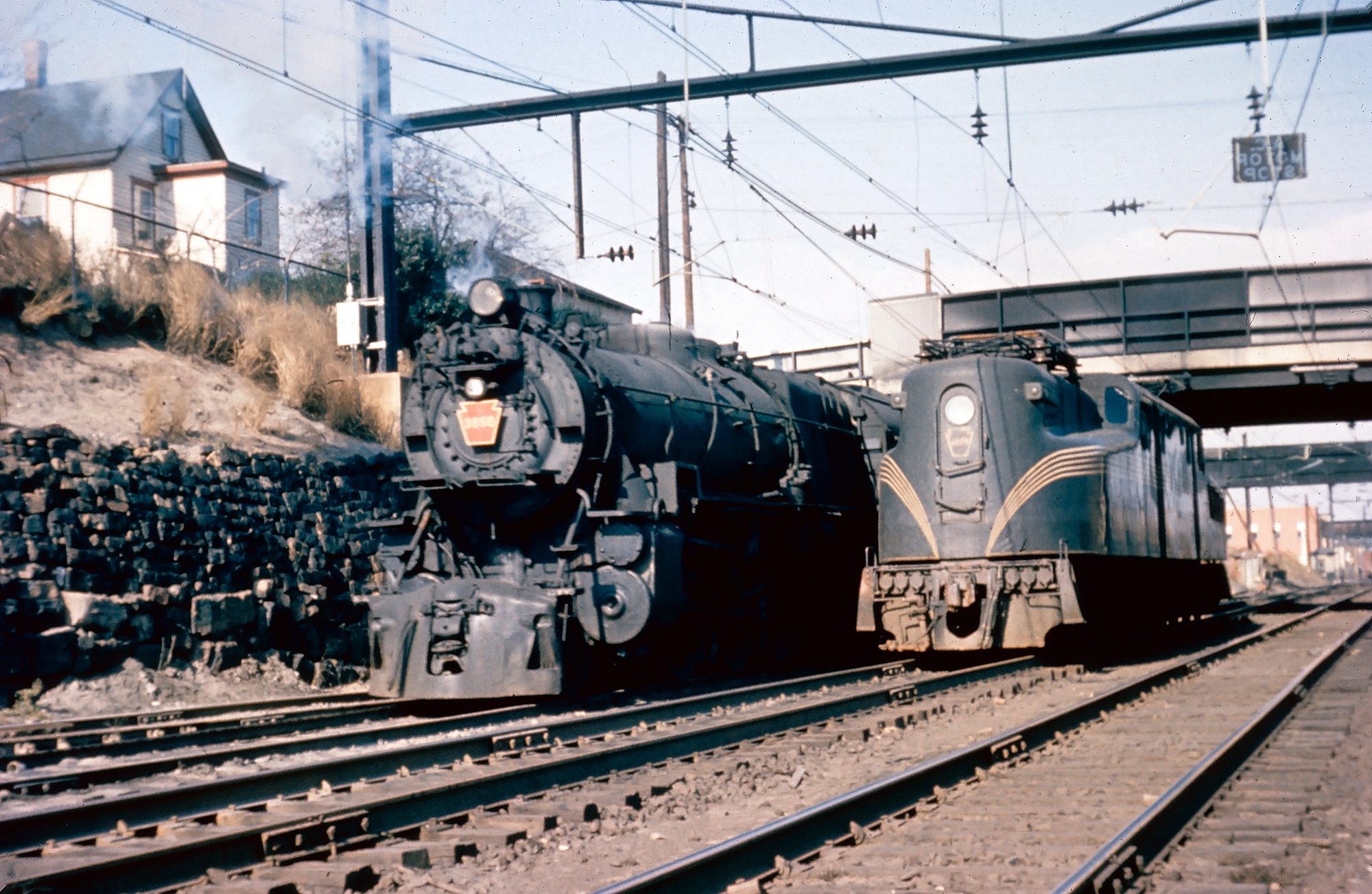 The GG1 is a railroad legend and it is a real blessing to have so many of these iconic locomotives still preserved today. While it has many times been proposed to restore a GG1 to operation the astronomical costs of doing so will probably prohibit such from ever happening.

However, with so many examples of the G still surviving just visit one of the many museums that feature the locomotive to see what these Queens of the rails looked like.