The Georgia Northeastern Railroad (reporting marks, GNRR) is a Class III shortline based in Marietta, Georgia that owns and operates roughly 72 miles of the Louisville & Nashville Railroad's famed "Hook & Eye" line between Marietta and Ellijay.

The railroad also provides freight service northward as far north as Blue Ridge on track owned by the state of Georgia.

The current Georgia Northeastern Railroad has been in operation since 1987 and has gone through a few ownership changes since the company originally purchased the track from CSX.

After the state purchased the line north of Ellijay the railroad started the now-popular Blue Ridge Scenic Railway in 1998, which operates excursion trains between Ellijay to McCayesville, Georgia/Copperhill, Tennessee. 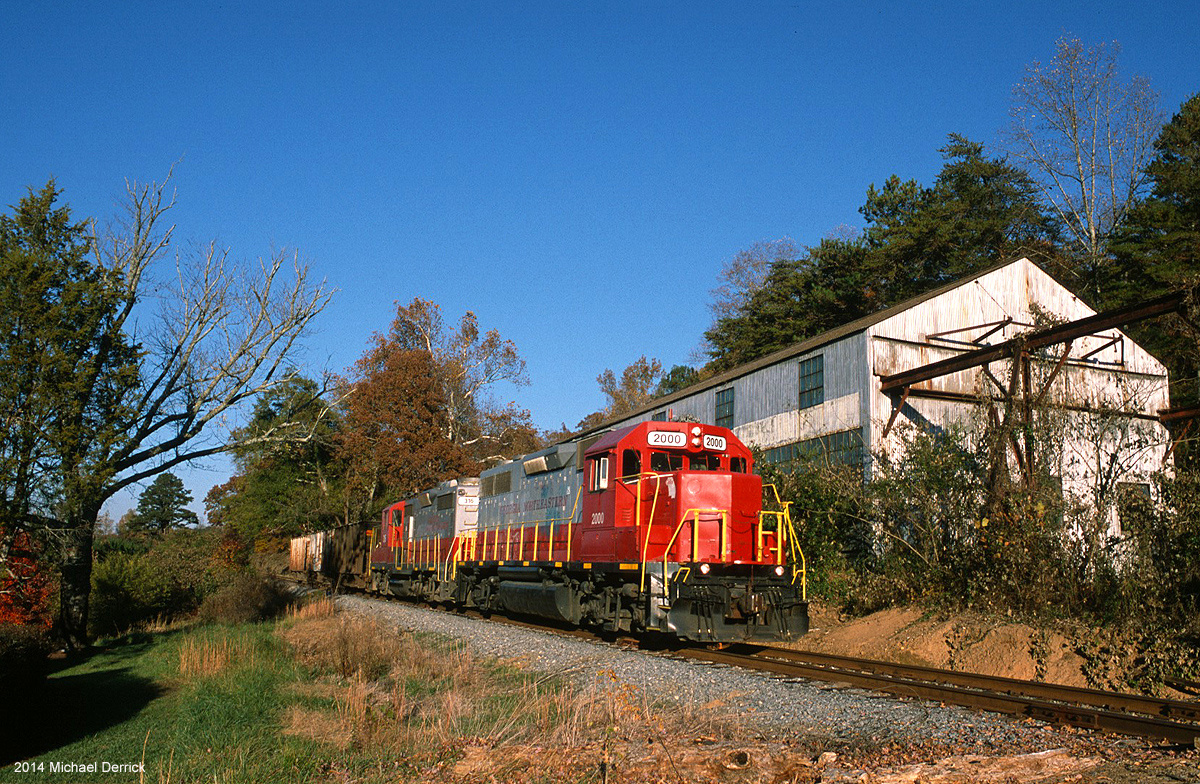 The creation of the Georgia Northeastern was one of many such short lines born in the mid/late 1980's when a then new CSX Transportation began a massive spin-off or outright abandonment of both secondary and main lines it deemed redundant.

This included the Louisville & Nashville's old "Hook & Eye," the Dixie Line's original route into Atlanta.  By the late L&N era it was seeing decreased use thanks to the superior Nashville, Chattanooga & St. Louis route located slightly to the west (built as the Western & Atlantic, a strategic artery of the Civil War).

The history of the L&N's famed "Hook & Eye" line dates back to before the start of the Civil War with the chartering of the Ellijay Railroad in 1854.

This railroad, however, never built any actual track despite its creators' hopes of constructing a railroad from Marietta, Georgia to Ducktown, Tennessee.

In 1859 it was renamed the Marietta, Canton & Ellijay Railroad in hopes of gaining investor interest in the new company which never materialized.

Finally, in 1867 after again being renamed as the Marietta & North Georgia Railroad construction began although it took help from the state to complete the line northward to Canton in 1879, another twelve years later.

Unfortunately, the original grade was built with steep grades and sharp curves to reduce construction costs further setting back the line. 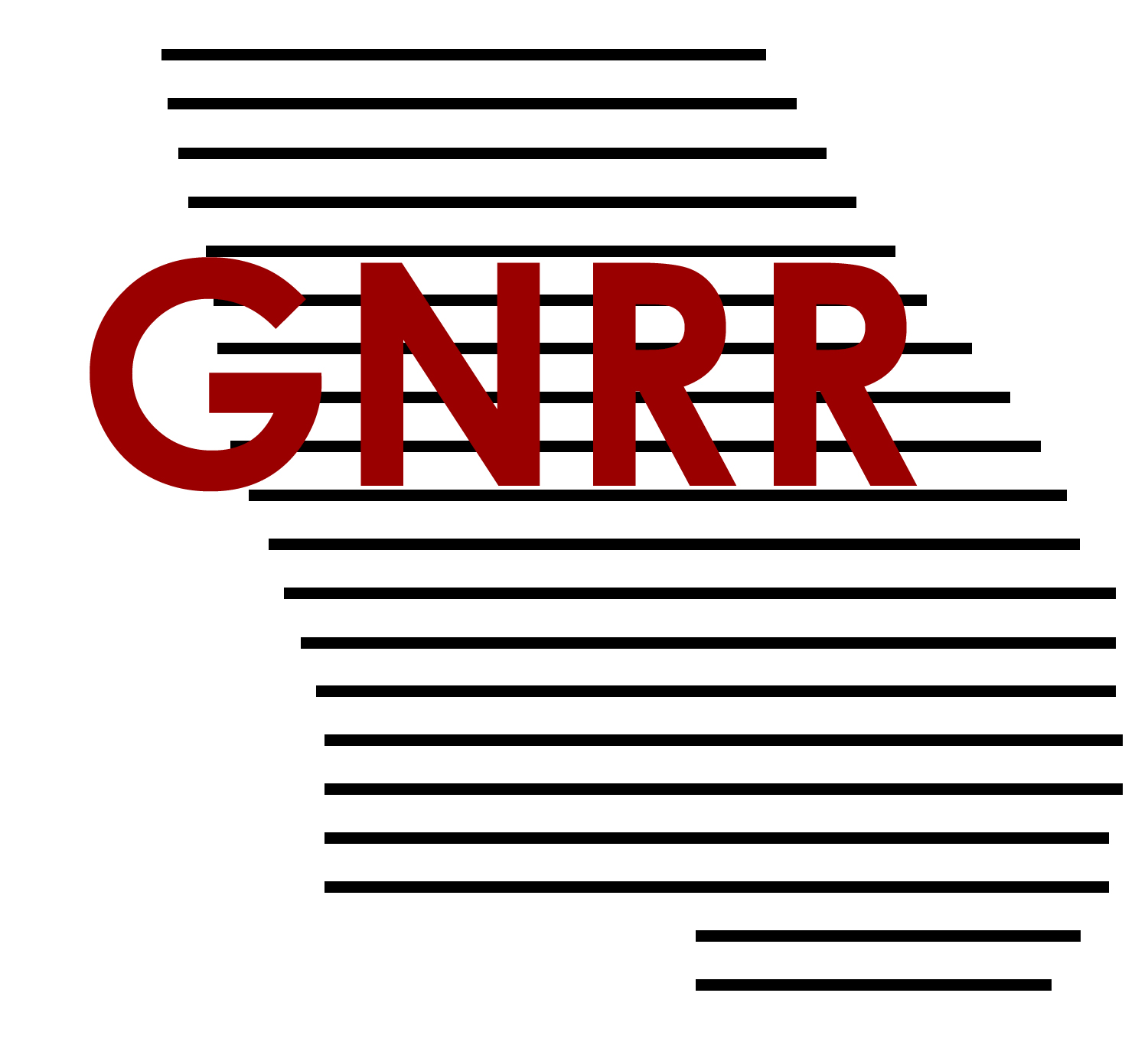 A year later in 1880, the railroad received new leadership under General Phillips who successfully convinced investors to begin funding the line further northward completing the route to Mineral Bluff by 1886.

With enough railroad to begin earning noticeable profits the owners of the M&NG started the Knoxville Southern Railroad to construct a line south to meet their railroad.

By the summer of 1890, the two companies met at Copperhill, Tennessee right along the state lines allowing for a complete, but poorly engineered line between Marietta and Knoxville (around this time the Knoxville Southern was merged into the M&NG).

The railroad would extend branches to Murphy, North Carolina and in Tennessee along its main line. However, with the route laden with switchbacks, step grades, and sharp curves and already in heavy debt the railroad declared bankruptcy by 1896.

While it was reorganized as the Atlanta, Knoxville & Northern Railway in June of that same year the Louisville & Nashville gained control of the company in April of 1902. 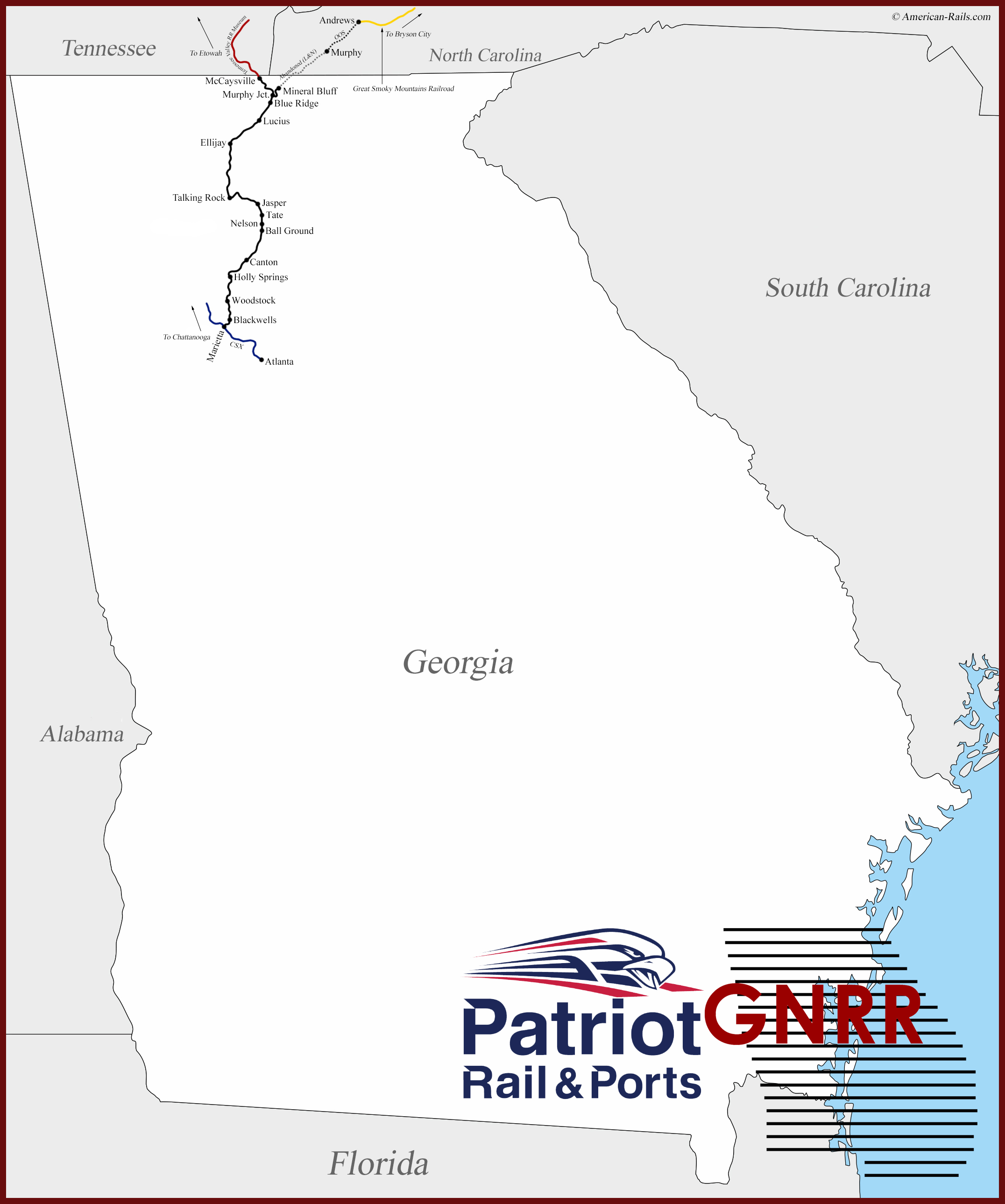 The L&N at this time was vastly expanding and already one of America's most successful railroads.  What gave the M&NG its "Hook & Eye" name came from two locations:

These efforts enabled the company to remove the many switchbacks plaguing the corridor.  As a result, transit times were greatly improved and grades reduced.

To remove one of these switchbacks engineers had the new alignment wrap around a small hill and pass over itself via a small, but high, wooden bridge, which remains in use today.  By the 1970's the L&N was in great transition.

The company had finally secured a coveted direct connection to Chicago in 1969 via acquisition of the Chicago & Eastern Illinois between Evansville, Indiana and Woodland Junction, Illinois (Missouri Pacific trackage rights were obtained beyond that point to reach the Windy City). 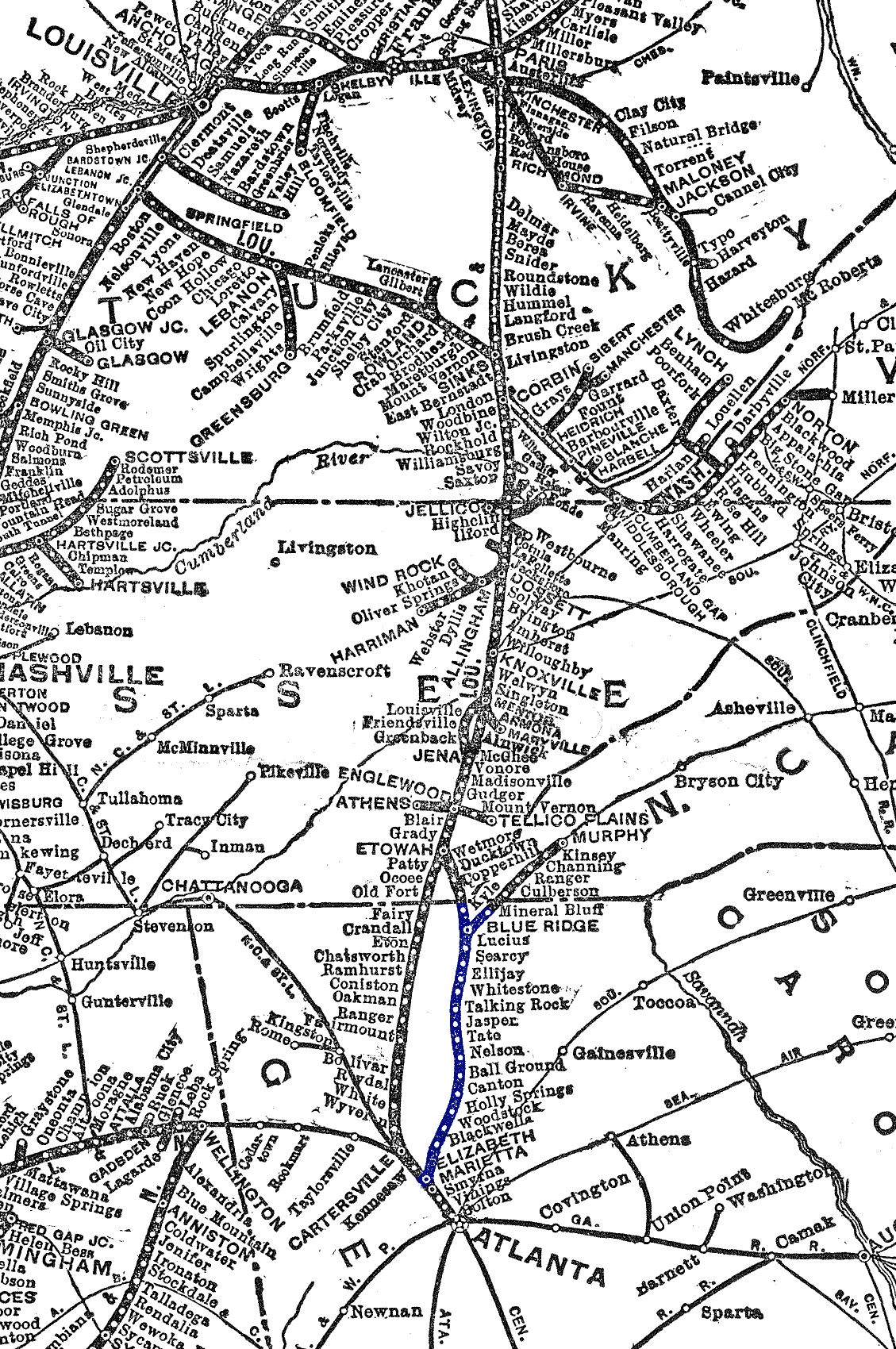 An excerpt of Louisville & Nashville's system map from 1940. Highlighted in blue is the old Hook & Eye now operated by the Georgia Northeastern Railroad. Author's collection.

However, many secondary routes were becoming unprofitable due to increasing competition.  During the late 1970's the L&N abandoned its Murphy Branch between Mineral Bluff, Georgia and Murphy, North Carolina which severed a connection with the Southern Railway.

As a result, the "Hooke & Eye" was now solely a linear route.  The scenic beauty offered by both "Murphy Branches" of the L&N and Southern would provide stunning train rides today but are unlikely to ever see trains again.

The Georgia Northeastern Railroad began operations in 1987 when CSX was interested in shedding unprofitable branch lines and sold to the GNRR 41 miles between Marietta and Tate and leased another 31 miles between Tate and Ellijay.

Eventually, the Georgia Northeastern was sold the track to Ellijay and the state purchase the line from there, northward to Copperhill/McCayesville. 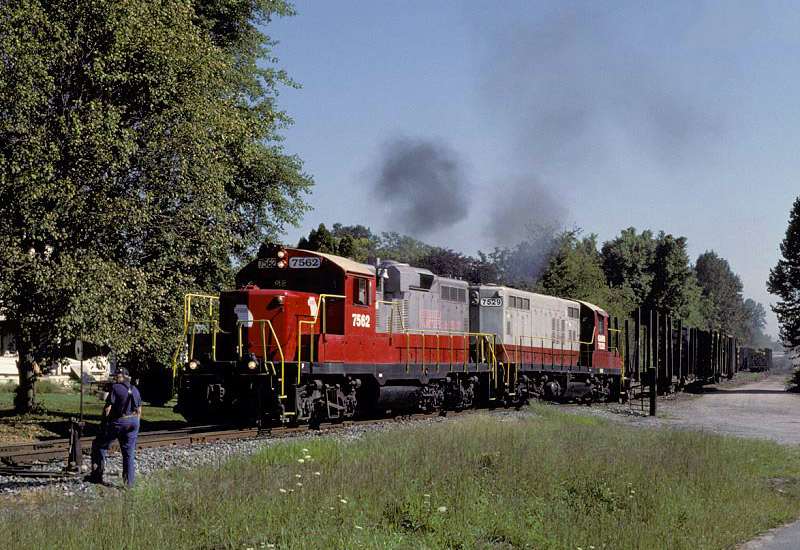 In 1990 the GNRR gained new ownership and CSX sold the rest of the line between Copperhill and Etowah to the state.  While in northern Georgia considering stopping by and visiting the Blue Ridge Scenic Railway, which operates on the Georgia Northeastern's trackage.

Between the scenic beauty of the Blue Ridge Mountains and experience of riding a train (where you can ride in either open or enclosed cars), you shouldn’t be disappointed.

If you would like to book your trip ahead you can do so directly through their website by either calling or reserving online (they actually recommend booking in advance as it is not uncommon for trains to sell out).