The Louisville & Nashville was never a railroad that was widely regarded for its fleet of streamliners and also did not heavily promote its fleet. However, the line did offer a number of well known trains such as the Azalean, Humming Bird, Pan American, and Flamingo.

One of its first streamliners was the Georgian, a train that initially served St. Louis and Atlanta although later ran all of the way to Chicago thanks to a partnership with the Chicago & Eastern Illinois.

A Brief History Of The "Georgian"

The L&N's early streamliners were not opulent and offered very limited luxuries. However, the trains were relatively successful and allowed the railroad to finally enter the new era of passenger rail travel in the late 1940s.

Because of its southern location and connections to several notable cities in the South (such as Atlanta and New Orleans), in the succeeding years the L&N would host a handful of streamliners some of which were its own while others run-throughs by other lines. 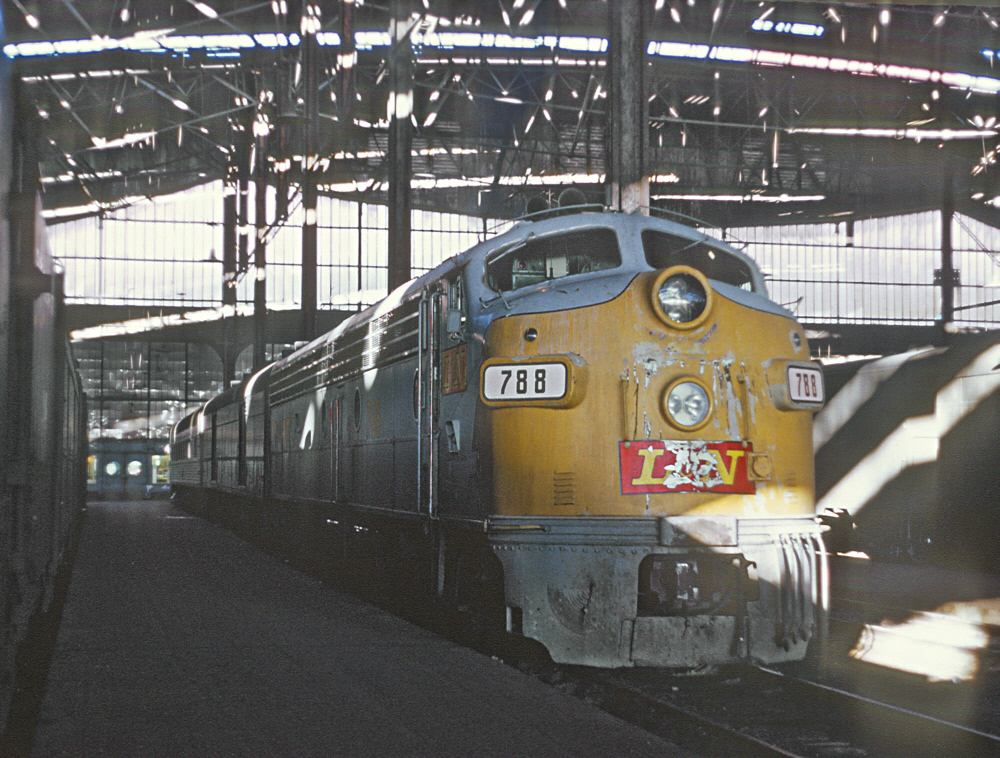 A Brief History Of The "Georgian"

The Georgian heralded the Louisville & Nashville's entry into the streamliner era when it debuted to the public in 1946. The train was one of two new streamliners the L&N inaugurated that year with the other being the company's highly publicized Humming Bird running between New Orleans and Cincinnati.

The streamliner initially operated between St. Louis and Atlanta. It ran this route for about a year in conjunction with subsidiary Nashville, Chattanooga & St. Louis.

However, apparently dissatisfied with the patronage the Louisville & Nashville decided to scrap that idea and work with the C&EI to have the train reach Chicago via a connection at Evansville, Indiana. While the L&N retained the connection to St. Louis the "new" Georgian of 1948 became an overnight run instead of its initial daytime operation. 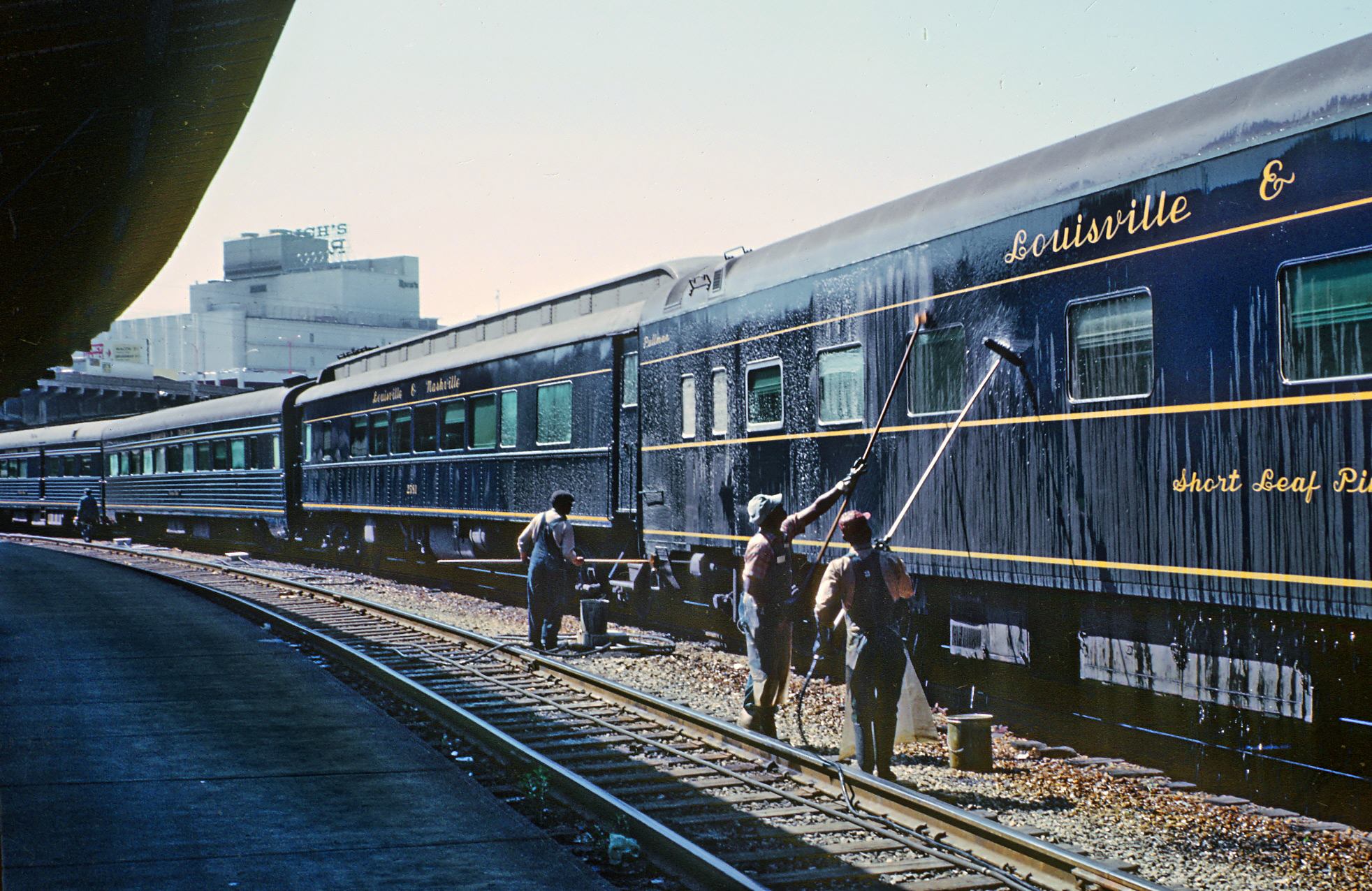 In this scene at Atlanta Union Station equipment belonging to Louisville & Nashville's "Georgian" receives a quick wash on April 15, 1963. The car being washed closest to the photographer is 6-section/6-roomette/4-double bedroom sleeper named "Short Leaf Pine." It was built by Pullman-Standard in 1953. Roger Puta photo.

Both it and Humming Bird received their streamlined equipment from American Car & Foundry. For power the trains used EMD E7s featuring a beautiful livery of blue and cream. The cars themselves featured a sleek stainless-steel sheathing with matching blue trim.

Overall, this original passenger paint scheme the L&N featured on its streamliners was very elegant although, unfortunately it would not last as the railroad elected to switch to a more traditional grey and yellow livery by the early 1960s.

In any event, neither train offered much in the way of luxurious services as both were, initially quite simple featuring only coaches, a diner, and a tavern lounge. 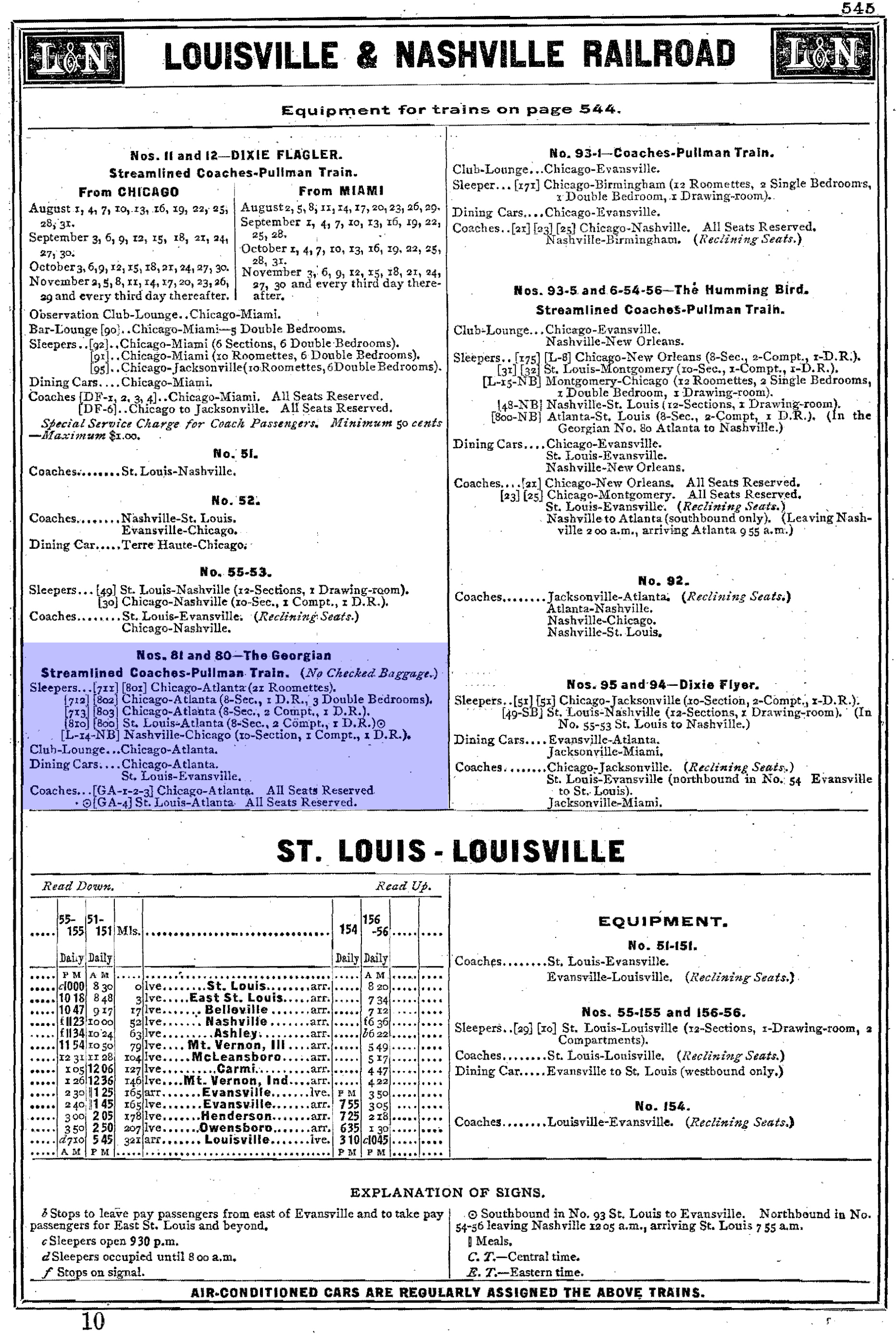 However, both streamliners proved to be a bit more successful than perhaps the L&N imagined and between this and the added length of both trains' routes the railroad soon needed more equipment.

However, during the late 1940s orders for new lightweight passenger cars were so great that it forced the railroad to improvise. While the railroad waited on new equipment to arrive it updated older heavyweight cars to improve both their interior layouts as well as giving them a semi-streamlined appearance to match the rest of the equipment.

Beginning in 1953, for the first time the Georgian received sleepers courtesy of a new order of cars from American Car & Foundry. This gave the train quite a bevy of services (part of which was thanks to partner C&EI which used a number of its discontinued coaches from its former Whippoorwill for the Georgian and Humming Bird as well) that allowed it to draw more patronage.

Typically, the train completed its run in 17 hours flat, departing Chicago at 3:45 P.M. as part of the C&EI and being handed off to the L&N at Evansville by 9:05 P.M. that same evening.

From that point the L&N finished the journey to Atlanta arriving there by 9:45 A.M. the following morning. It should be noted that along with the ability for passengers to also still reach St. Louis the L&N offered connecting through sleeper service to Cincinnati, Ohio as well.

By the 1960s the train's consist had changed somewhat with up to six sleepers to or from connections to the cities already mentioned (as well as Montgomery, Alabama), reclining seat coaches, a diner, and club lounge. 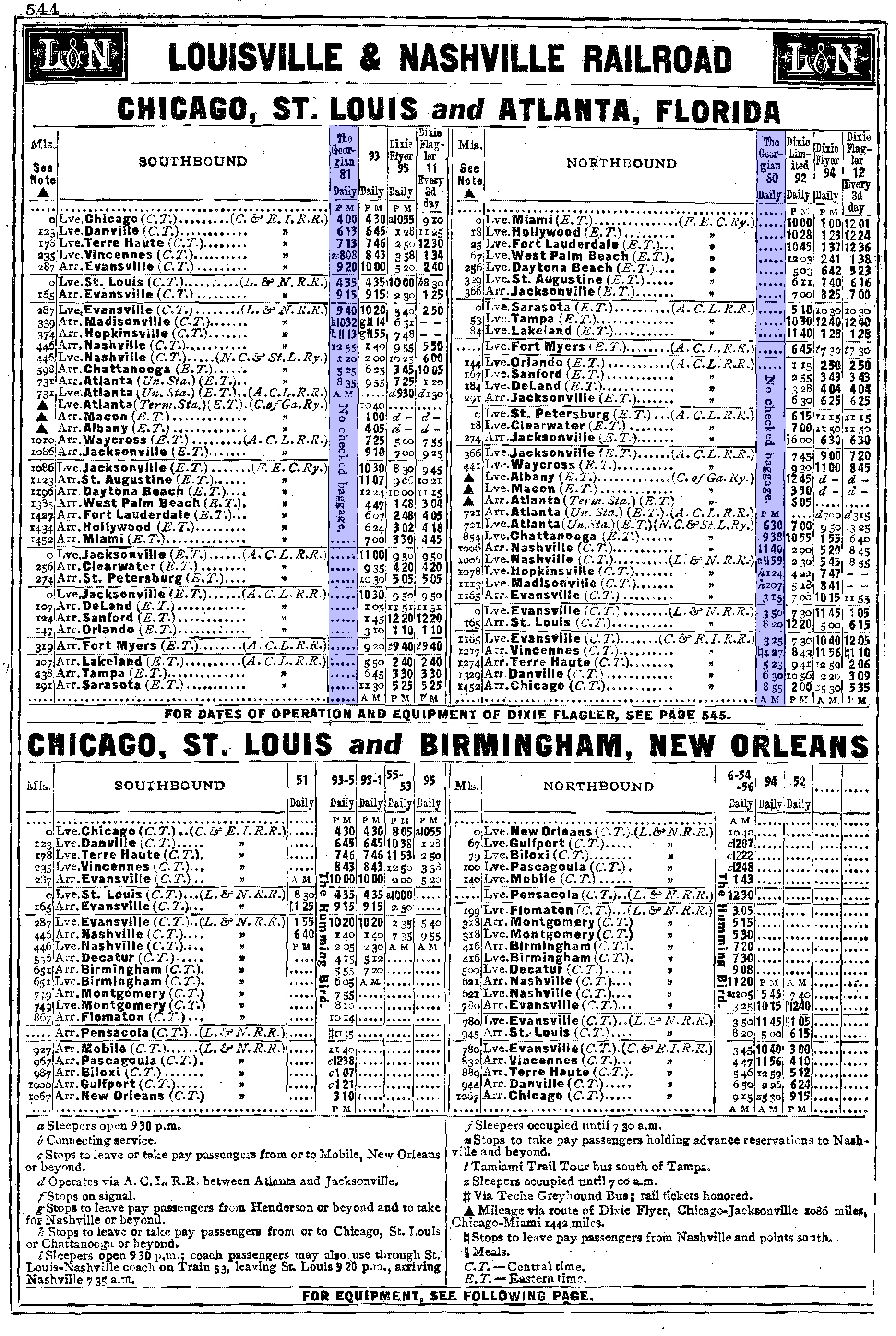 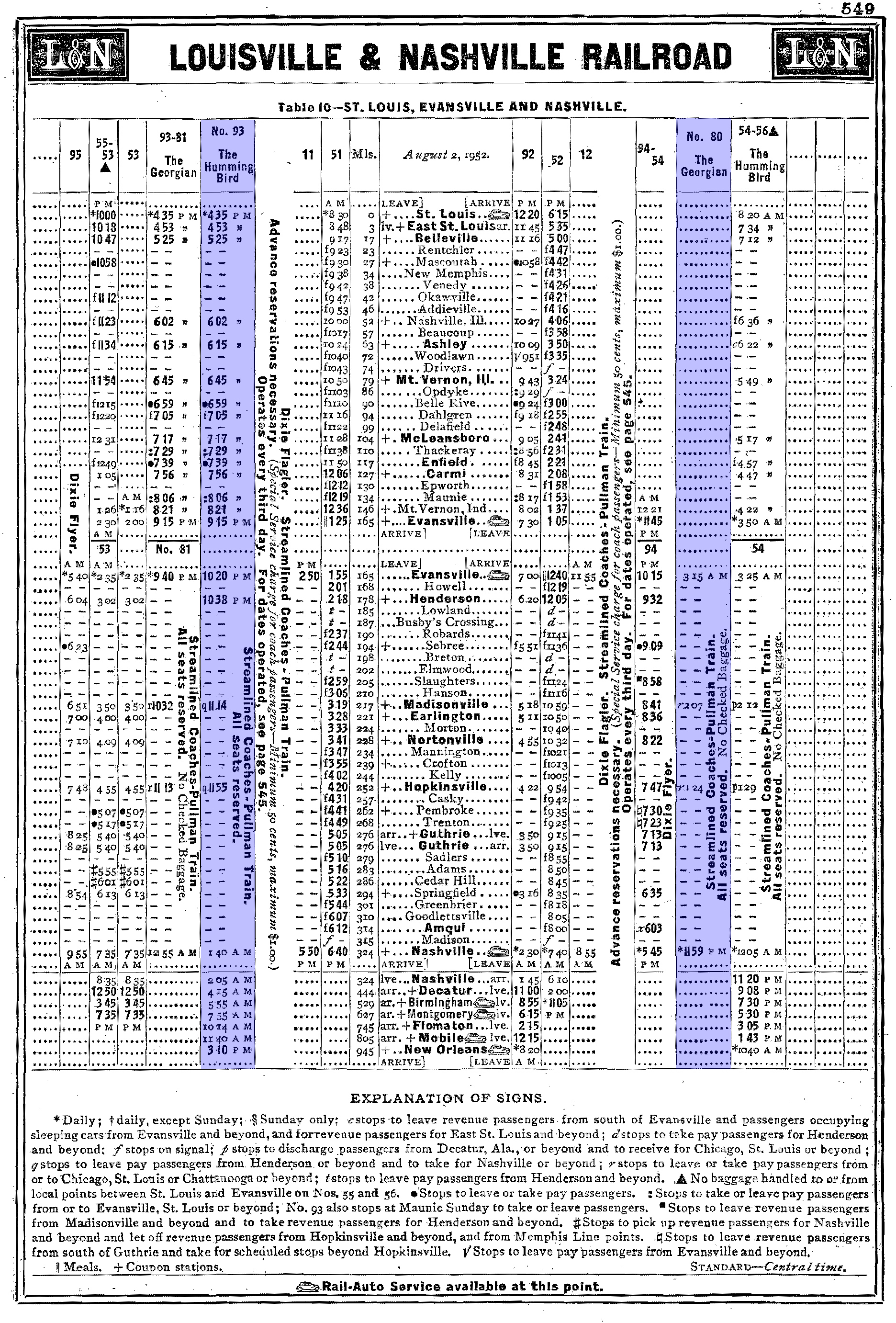 As patronage declined in 1958 the L&N combined the Georgian and Humming Bird during the C&EI's run between Chicago and Evansville.

Perhaps most interesting is that even during the 1960s when interest in rail travel was waning with the public the Georgian still remained most folks' top choice when traveling between Chicago and Atlanta. By 1968 the train was truncated to serving its original route between St. Louis and Atlanta.

This lasted for another three years until Amtrak took over intercity rail services on May 1, 1971, and did not retain the train within its new system. By that point the L&N was more than happy to rid itself of passenger operations, as it had long since lost interest in such.