During the 1820s several attempts were under to charter and develop railroads with the new technology already in use in England.

The first to be chartered, which was actually built and operated, was the Granite Railway Company based in Quincy, Massachusetts.

Eventually the small property was re-chartered as a common-carrier although it began as a private operation to move large amounts of stone granite, which the company was named after.

Interestingly, enough, despite using horse-power for years the railroad saw many years of use, eventually becoming part of the New York, New Haven & Hartford (the New Haven), which abandoned much of the route.

However, part of the original right-of-way remained in use through the mid-20th century.

Today, a section of this right-of-way is preserved as a trail and its famous incline is listed on the National Register, also preserved along with several designs that the company is credited with first implementing. 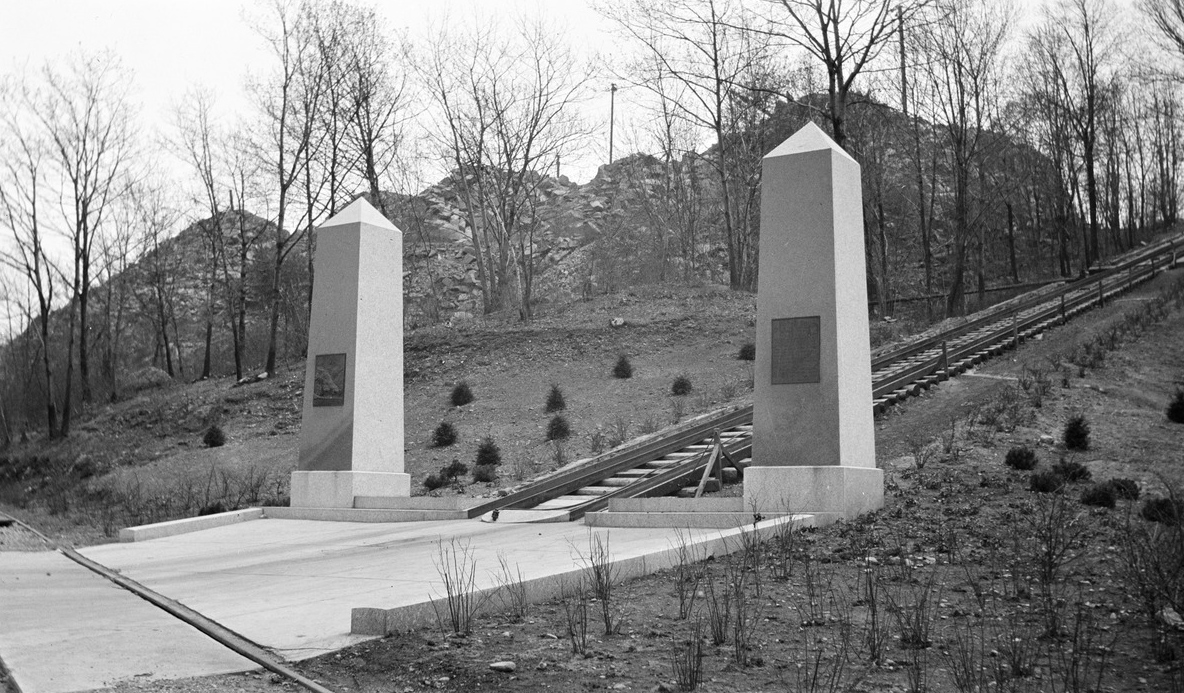 A view of the Granite Railway's preserved incline and obelisk monument in April of 1934.

There were many "firsts" occurring during the birthplace of the railroad industry in the United States during the 1820s from the first chartered common-carrier (Baltimore & Ohio) to the first regularly schedule passenger train pulled by a steam locomotive, the Best Friend of Charleston on the South Carolina Canal and Rail Road.

Technically, the first railroad ever chartered in America was the New Jersey Railroad Company of 1815 by Colonel John Stevens. However, it never actually began construction until 1832.

As such, the distinction of the first railroad chartered, built, and operated was the Granite Railway Company.  The little line was chartered on March 4, 1826.

Hoping to easily transport the movement of granite between Quincy and the Neponset River at Milton its builders, led by Gridley Bryant, initially intended it only to furnish the needed stone to complete the Bunker Hill Monument project.

However, with a steady supply of stone the quarry became rather profitable prompting many years of use for the railroad.

The creation of the system was the brainchild of William Ticknor, a prominent lawyer of his times.  Following a meeting at the home of Colonel Thomas Handasyd Perkins (a well-known Boston ship owner), which included the Honorable William Sullivan and Daniel Webster, along with Professor George Ticknor and William Tudor, the Bunker Hill Monument Association was born on June 7, 1823.

By 1825 the group had secured 15 acres near Breed's Hill to build the monument while Gridley acquired another 5 acres near Furnis Lott in West Quincy to quarry the stone.

The group then took their case to the state legislature to petition for a railroad as the mechanism to haul granite to the monument site.  Their petition, dated January 4, 1826, read as follows:

"TO THE HONORABLE SENATE AND HOUSE OF REPRESENTATIVES, FO THE COMMONWEALTH OF MASSACHUSETTS IN GENERAL COURT ASSEMBLED:

The undersigned petitioners represent that it would be of great public utility to establish a Railway [sic] from Certain Quarries in the town of Quincy to the tidewaters for the carrying of Stone to be used  in Building; that your petitioners are disposed to establish the same, or to aid in effecting it; but that it will require a voluntary subscription, and employment of a large sum of money, and that such a sum can only be obtained by extending the subscription among many persons, and that it would greatly facilitate the enterprise if those who are in it should act under corporate powers.

Wherefore these petitioners pray that they may be incorporated under the name of The Granite Railway Company with such powers and duties as to the Legislature may seem just and proper.

The line would run just 3 miles in length and, interestingly, no thought was given at the time to even consider using steam locomotives; true horsepower would be used to pull cartloads of granite rock. It opened for business, officially, on October 7, 1826.

It was truly a concept hearkening back thousands of years but proved its worth as it remained relatively unchanged until 1866.

The gauge was set to five feet, wide by today's standards of 4 feet, 8 1/2 inches although during that era nearly everything in relation to the railroad industry was still in the developmental stage.

As it turns out, Bryant proved quite an incredible pioneer in the history of American railroads although he has largely been a forgotten figure.  He is credited with inventing the original track switch, first dual-axle, swivel-trucked freight car (eight wheels), turntable, and portable derrick.

He did all of this of his own making, without ever turning to English railways for inspiration.  In addition, officials with the Baltimore & Ohio would later inspect the Granite Railway before beginning construction. 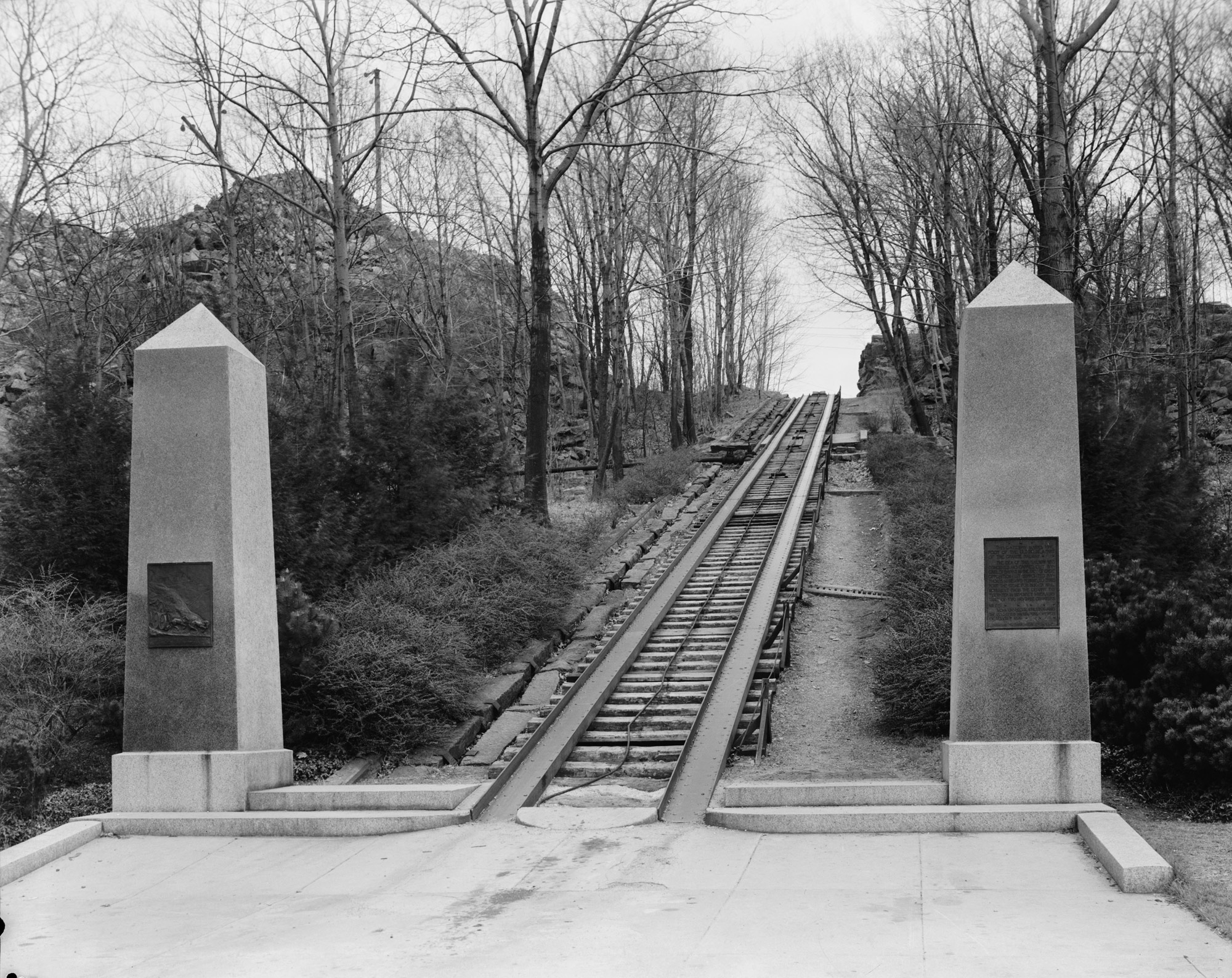 Another view of the railroad's preserved incline in April of 1934.

After four years of operations the system was slightly expanded when an incline system was built to serve a new mine, the Pine Ledge Quarry. The incline was 315 feet in length and rose to a level of 84 feet.

At the top was the new mine while at the bottom it reconnected with the rest of the railroad system. It functioned as an endless conveyor belt with wagons delivering loads to the bottom and returning to the top empty.

As previously mentioned, the company has been credited with creating a number of railroad designs such as turnouts (also known as switches, or frogs), the turntable, and even double-trucked freight cars (two axles housed within a single carriage apparatus).

However, because the railroad's chief engineer, Gridley Bryant who created these inventions, believed that they should be available for the entire industry and public in general he never patented them.

By 1837, after more than a decade of continuous service, the wooden, strap-iron rails were seriously eroding. With a steady supply of incredibly hard stone the railroad made the logical choice of using granite as replacement for the wood and again placed iron straps atop these stones.

The company remained independent until it was acquired by the Old Colony Railroad in 1870.  This system would grow to serve most of eastern Massachusetts and also reached Providence, Rhode Island covering about 617 miles.

Up until its acquisition, the Granite Railway had always used horse power to move loads of stone. However, under new management it switched to more efficient steam locomotives. The use of steam eliminated the need for barging stone down the Neponset River to Boston since the company operated its own line to the city.

Finally, the Old Colony Railroad also did away with the granite trackage using traditional iron "T"-rails and wooden ties, set to standard gauge.

In 1893 the system was acquired by the growing New Haven Railroad.  Under the NYNH&H it was known as the Granite Branch or West Quincy Branch.  It surprisingly remained in service until after World War II when most of the line was finally obliterated to build the Southeast Expressway between Boston and Cape Cod.

For a time, a short segment remained as an industrial spur, serving industries near Braintree up through the Penn Central era.  In addition, the incline section remained in use until the 1940s with the granite rail section plated over with metal planks and used as a roadway system for trucks.

Today, much of the original right-of-way between Quincy and the Neponset River is a rail/trail while the old incline system now has plaques and markers describing its use and distinction as a National Register of Historic Places (which was first dedicated on June 19, 1973).