The Georgia Southwestern Railroad is a 234-mile shortline based out of Dawson, Georgia. The railroad may technically be a Class III carrier but it is the third largest rail operation in the state, behind only Norfolk Southern and CSX.

The GSWR’s operates trackage that was owned by both the Seaboard Air Line and Central of Georgia (the railroad's original livery even paid tribute to the Central of Georgia) with a heritage dating back to the latter 1800s.

When the GSWR began operations in 1989 it was originally a subsidiary of the South Carolina Central railroad (SCRF).  This system was a 1987 startup utilizing sections of former SAL and Atlantic Coast Line trackage between Bishopville and Florence situated near the Palmetto State's eastern border.

Today, both the SCRF and GSWR, which were later acquired by RailAmerica, joined Genesee & Wyoming in 2012 when that company purchased RA.

Today, G&W is the nation's largest shosrt line conglomerate with a network of 116 railroads in the United States, Canada, Belgium, Netherlands, Poland and the United Kingdom.

The Georgia Southwestern's traffic base is quite diversified and currently includes chemicals, plastics, agriculture, food products, minerals, and aggregates. 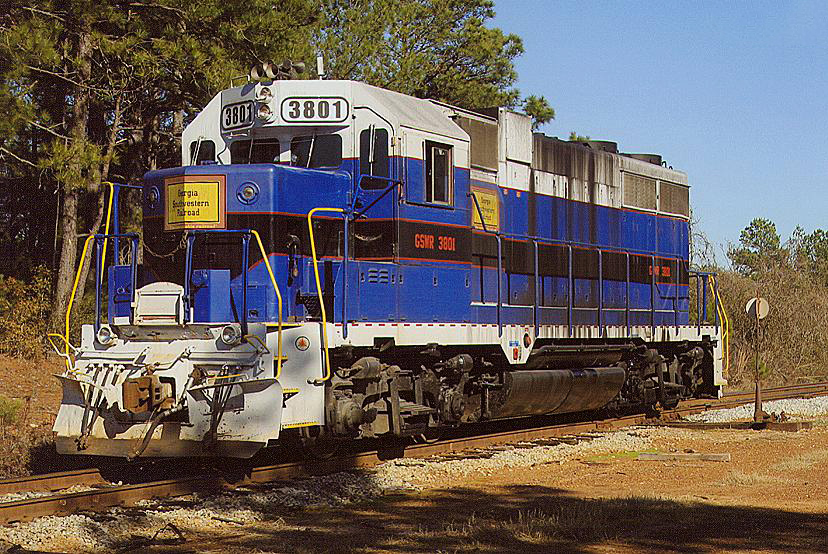 As mentioned before the lines that make up the Georgia Southwestern Railroad system are comprised of two former Class I systems, the SAL and Central of Georgia.

The formerly predominantly runs north-to-south (Columbus to Cusseta via Fort Benning and from Cuthbert to Bainbridge) while the latter comprises its east-to-west main line from Smithville to White Oak.  In both cases these lines were located at the western end of each railroad's network.

The Seaboard's trackage was originally built by the Americus, Preston & Lumpkin of 1884 to connect its namesake cities.

The company's line was completed by 1887 and a year later was renamed the Savannah, Americus & Montgomery Railroad. In 1895 the company again went through a name change as the Georgia & Alabama Railway.

At its peak the G&A connected Montgomery, Alabama with Lyons, Georgia (which was located west of Savannah). In 1896 the G&A took control of the Columbus Southern Railway which had been built in 1890 connecting Albany with Columbus. In 1900 the G&A came under the control of the SAL.

The final railroad that was eventually leased by the SAL in 1928 was the Georgia Pine Railway, which was chartered in 1895 to build a line north from Bainbridge.

Three years later in 1898 the railroad had a 28-mile line in operation to Damascus. After the railroad was renamed as the Georgia, Florida & Alabama Railway in 1901 it soon began building north and south.

The line reached Richland, Georgia that same year (and a connection with the Seaboard Air Line) and Tallahassee, Florida a year later in 1902.

While the Seaboard is often remembered as a north-south road linking Richmond with southern Florida and predominantly staying along the coast it did serve the interior.  Just like rival Atlantic Coast Line, SAL reached both Montgomery and Birmingham, Alabama.

However, following the formation of CSX Transportation, components of both the ACL and SAL were siphoned off (either sold or abandoned) in an effort to create a more streamlined network.

The success of this tactic (also carried out on its northern lines) is debated to this day.  Whatever the case, it did form numerous short lines, which included the Georgia Southwestern. 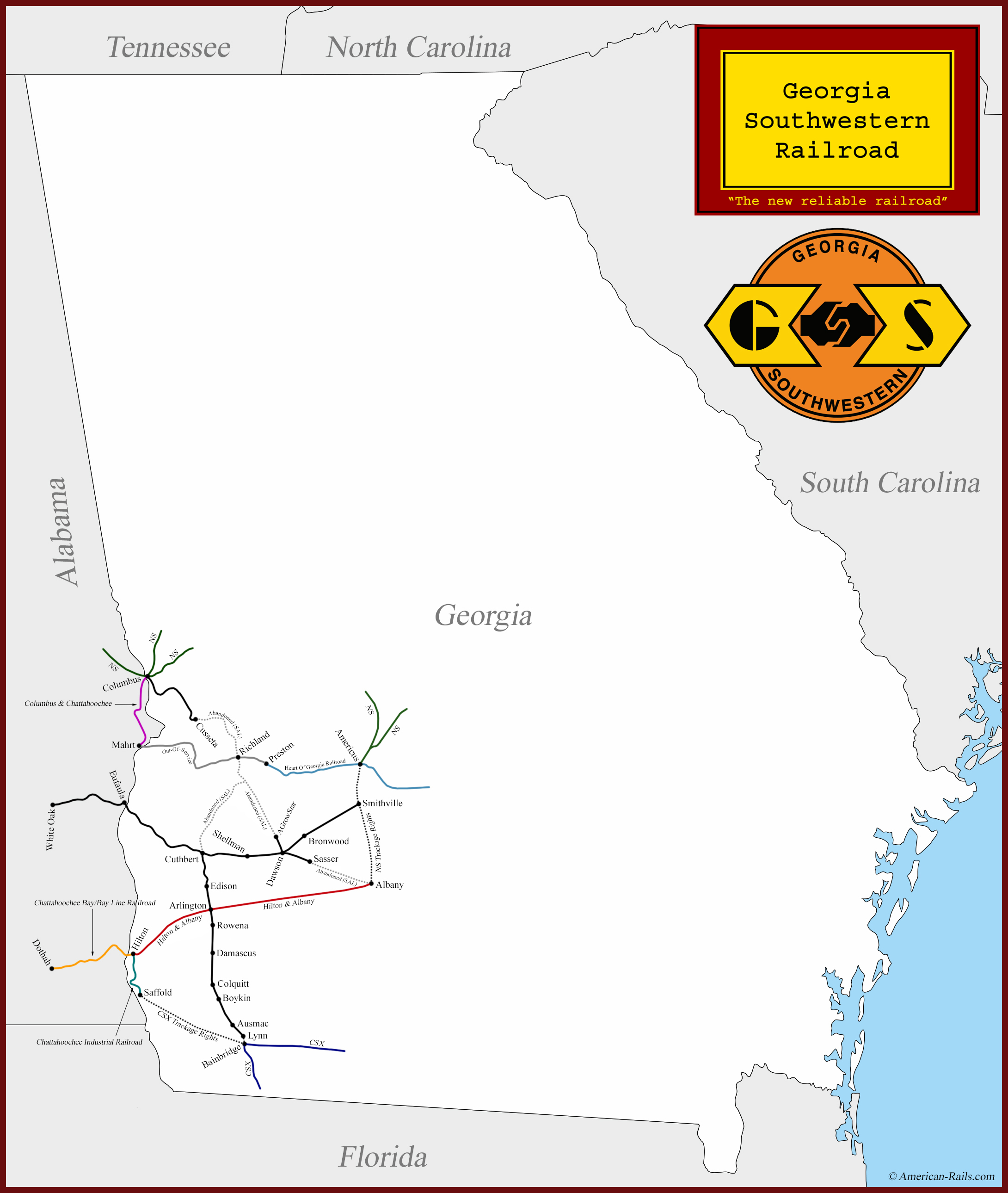 A present-day system map of the Georgia Southwestern Railroad. Note that aside from CSX and Norfolk Southern, all other railroads highlighted are properties of Genesee & Wyoming. Author's work.

The other component of the Georgia Southwestern system was built by the Central of Georgia, a Southern Railway predecessor.

There were two sections; the first was CoG's secondary line between Columbus and Americus, sold by NS in 1995 as it, too, looked to pare down its network via the company's so-called Thoroughbred Shortline Program.

However, in 1995 the GSWR purchased the G&A.  Today, the corridor remains in use.  The Georgia Southwestern’s most well-known freight is peanuts (of all things!) but it does have a traffic base in other commodities such as stone, chemicals, and forest products.

The railroad also once hosted excursions behind a pair of ex-VIA Rail FP9's.  Alas, this was discontinued after a change in contract negotiations with NS forced passenger trips off of the line in 2006.

The units remained in freight service until 2008 and were then sold to Larry's Truck & Electric (LTEX) in early 2011. 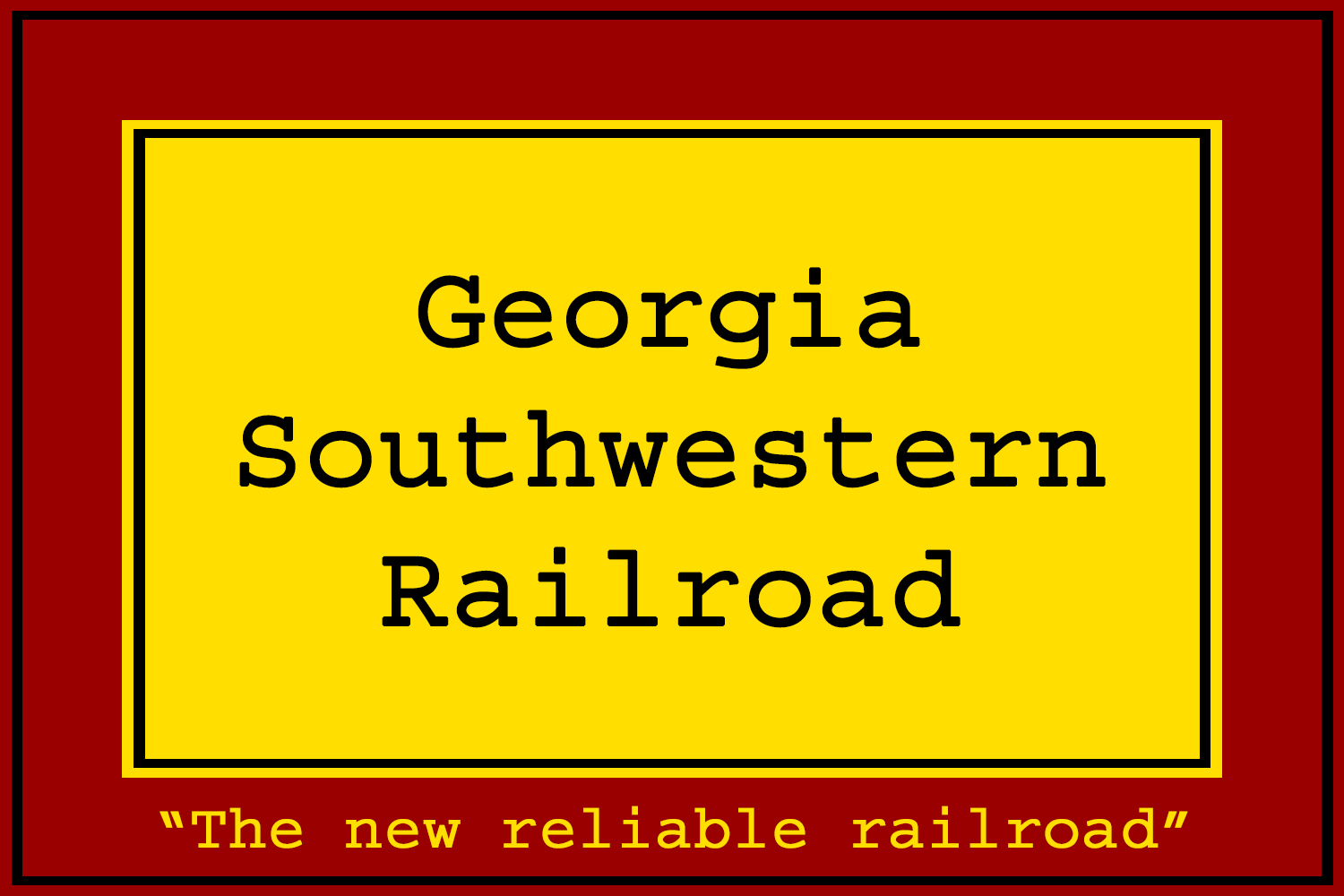 The Georgia Southwestern Railroad's logo prior to the Genesee & Wyoming acquisition. Author's work.

The Central of Georgia was always a regional road with a heritage tracing as far back as 1834.

At its peak the CoG's system stretched some 2,700 miles (including all subsidiaries and leased lines) and radiated in all directions away from Macon reaching Savannah, Albany, Athens, Atlanta, Dothan, Montgomery, Chattanooga, and Birmingham.

Despite its relative small size in comparison to the ACL, SAL, Southern, and Louisville & Nashville it did provide key connection points for these roads, particularly in relation to the L&N and parent Southern for through passenger trains.

Until 1948 the CoG was under the control of Illinois Central and proved an important eastern extension for "The Maine Line Of Mid-America."

The Southern took control in 1963 and from that point slowly integrated the company into its network.  In 2012 the CoG was recognized by Norfolk Southern with its classic livery applied to ES44AC #8101. 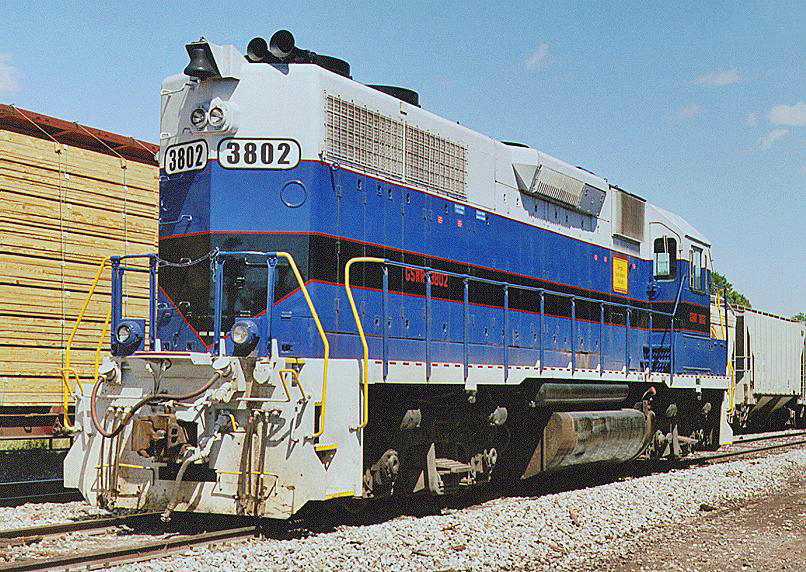 Georgia Southwestern GP38 #3802 takes a break from its assignments at the yard in Cuthbert, Georgia on May 11, 2006. Doug Kroll photo.

At its peak the Georgia Southwestern owned 258.4 miles of track but after cutting back part of the line between Cuthbert and Columbus its system now includes only 234 route miles.

Today, this segment still runs as far south as Cusseta, just south of Fort Benning.  The track is still in place for a few miles beyond this point but has essentially been abandoned.

The GSWR also has trackage rights to Albany via Norfolk Southern and Bainbridge and Saffold via CSX where it connects with another G&W owned line, the Chattahoochee Industrial Railroad.

The future sure looks bright for this line as its carloadings continue to increase by at least 1,000 annually. I guess the railroad’s slogan sure fits it well, “The new reliable railroad” (A slogan the Central of Georgia used for years).