The gas turbine locomotive was a follow-up to the rather unsuccessful steam turbine design. In many ways, however, the designs were completely different from a mechanical standpoint.

Also known as GTELs (which was short for gas turbine-electric locomotives), Union Pacific was the only Class I railroad to use the design in regular service.

From an operational standpoint the locomotives actually proved rather successful and its fleet of 55 (built within three different classes) lugged freights for more than 20 years.

As with steam, the petroleum version was highly inefficient in terms of fuel usage.  It deviated in one noteworthy way; the GTEL's were much more mechanically sound.

In addition, the fuel they utilized was relatively cheap at the time, making gas turbines inexpensive to operate and actually quite efficient due to their phenomenal horsepower and tractive effort.

As oil prices rose the UP's gas turbine locomotives became less and less efficient to the point that all were off of the roster by 1970.  Today, a few examples of this unique locomotive are preserved around the country. 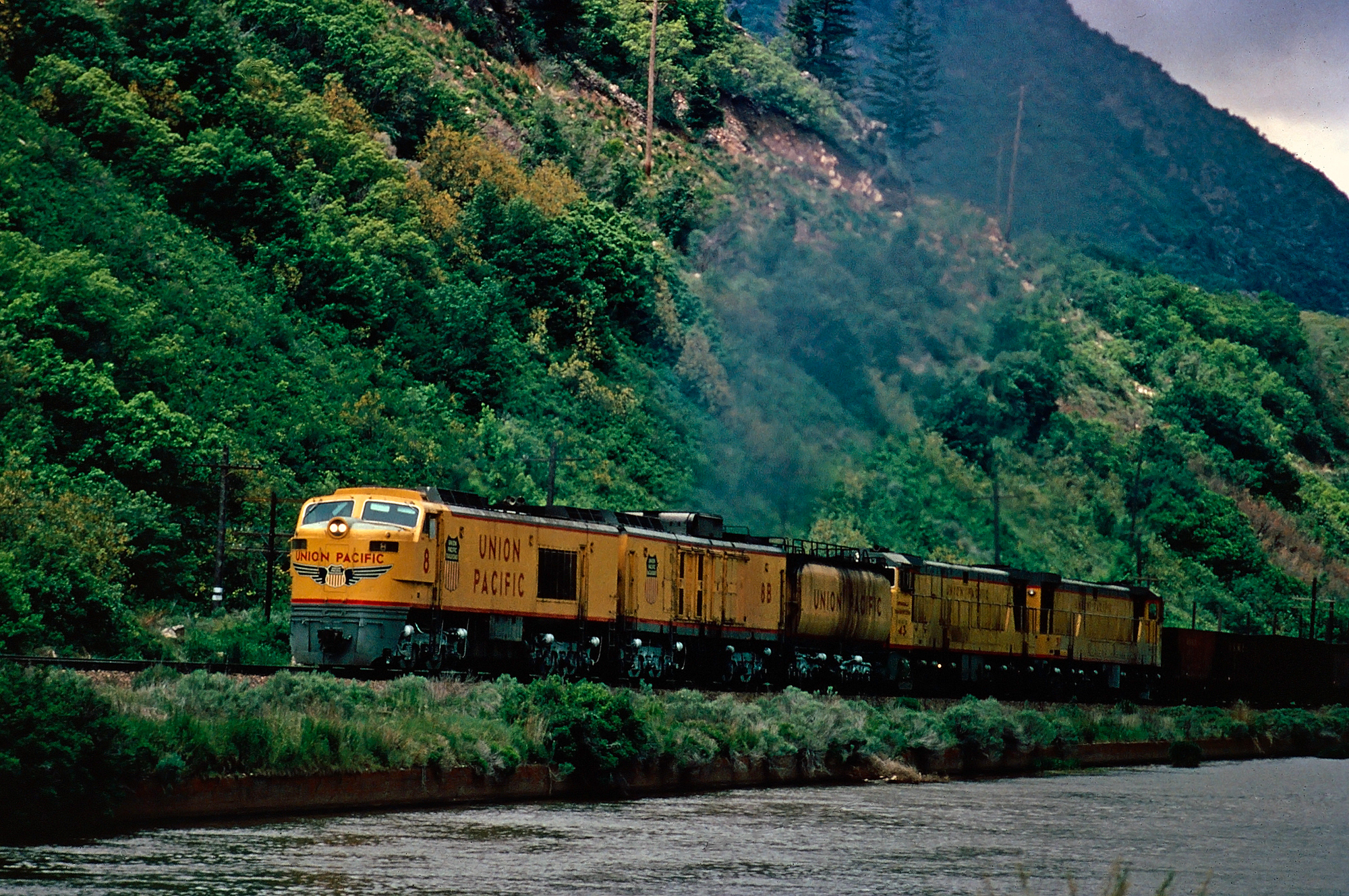 Union Pacific "Big Blow" #8, along with its fuel tender and a pair of U50's, lead an eastbound through Weber Canyon near Uintah, Utah on June 7, 1967. The entire locomotive set in this photo offered, roughly, a combined 18,500 horsepower. American-Rails.com collection.

The gas turbine locomotive functions quite similarly to a standard diesel-electric except instead of a traditional diesel engine a turbine is used instead (specifically a turboshaft engine which powered the on-board generator).

The mechanics of diesel locomotives are rather straightforward, although it is commonly mistaken that the diesel engine itself propels the locomotive, which is not the case.

While the diesel engine is the prime mover the energy it creates drives an electrical generator, which in turn drives the traction motors found within the locomotive’s trucks that actually turns the wheels (or the mounts which sit over the axles) and propels unit forward.

The diesel engine itself has no connection to the actual motion of the wheels and in essence the locomotive is an electric locomotive which carries its own power source on board. 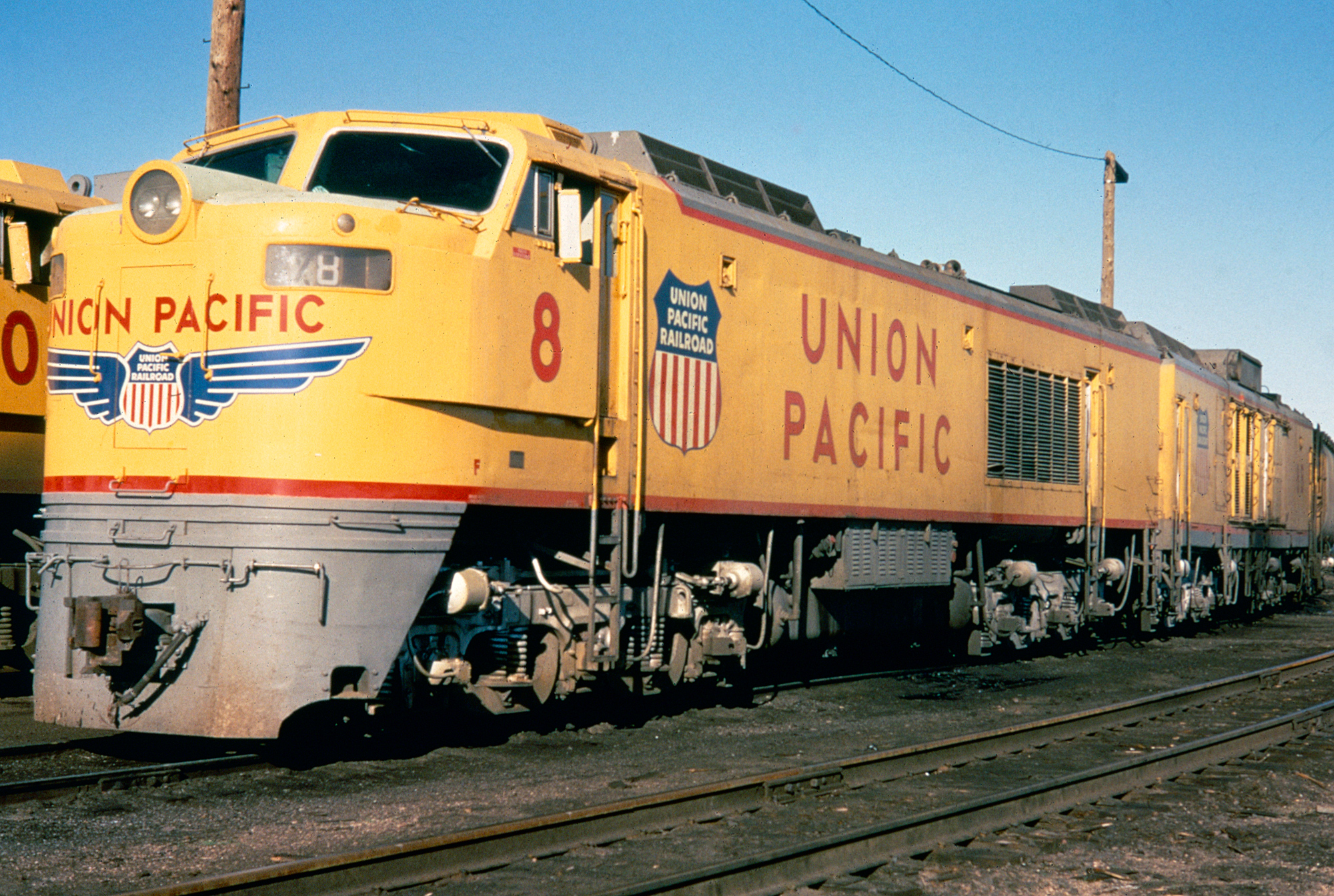 As from the Union Pacific, no other main line railroad elected to use a GTEL on the basis of fuel economics. However, in 1950 Westinghouse developed a gas turbine locomotive for testing known as the "Blue Goose."

This experimental, #4000, produced 4,000 horsepower and carried a B-B-B-B wheel arrangement. It tested on Chicago & North Western, Katy, and Pennsylvania railroads but ultimately none chose to use the design (the PRR had just recently scrapped an unsuccessful steam turbine design in the late 1940s). 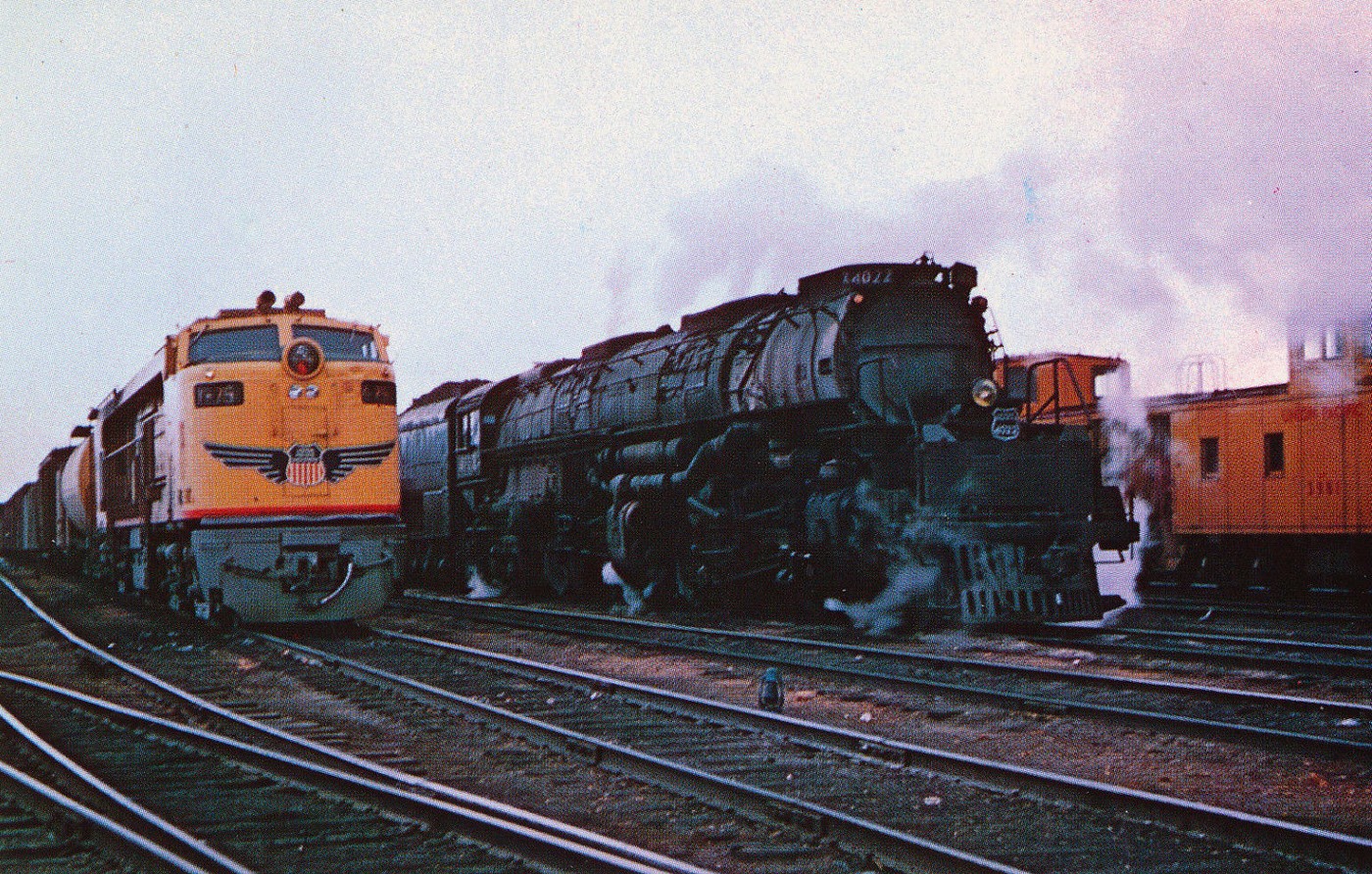 As for the Union Pacific, because of its region of operations and hunger for powerful locomotives the gas turbine design fit quite nicely on its system.

The first test model was #50, built as a partnership between General Electric and the American Locomotive Company (Alco) in 1948.  While never owned by the railroad it was tested throughout 1949 on the UP system.

The GTEL carried a B+B-B+B wheel arrangement and could produce a hefty 4,500 horsepower. It carried a carbody design resembling an Alco FA diesel locomotive, obviously due to that company being one of the GTEL's manufacturers. 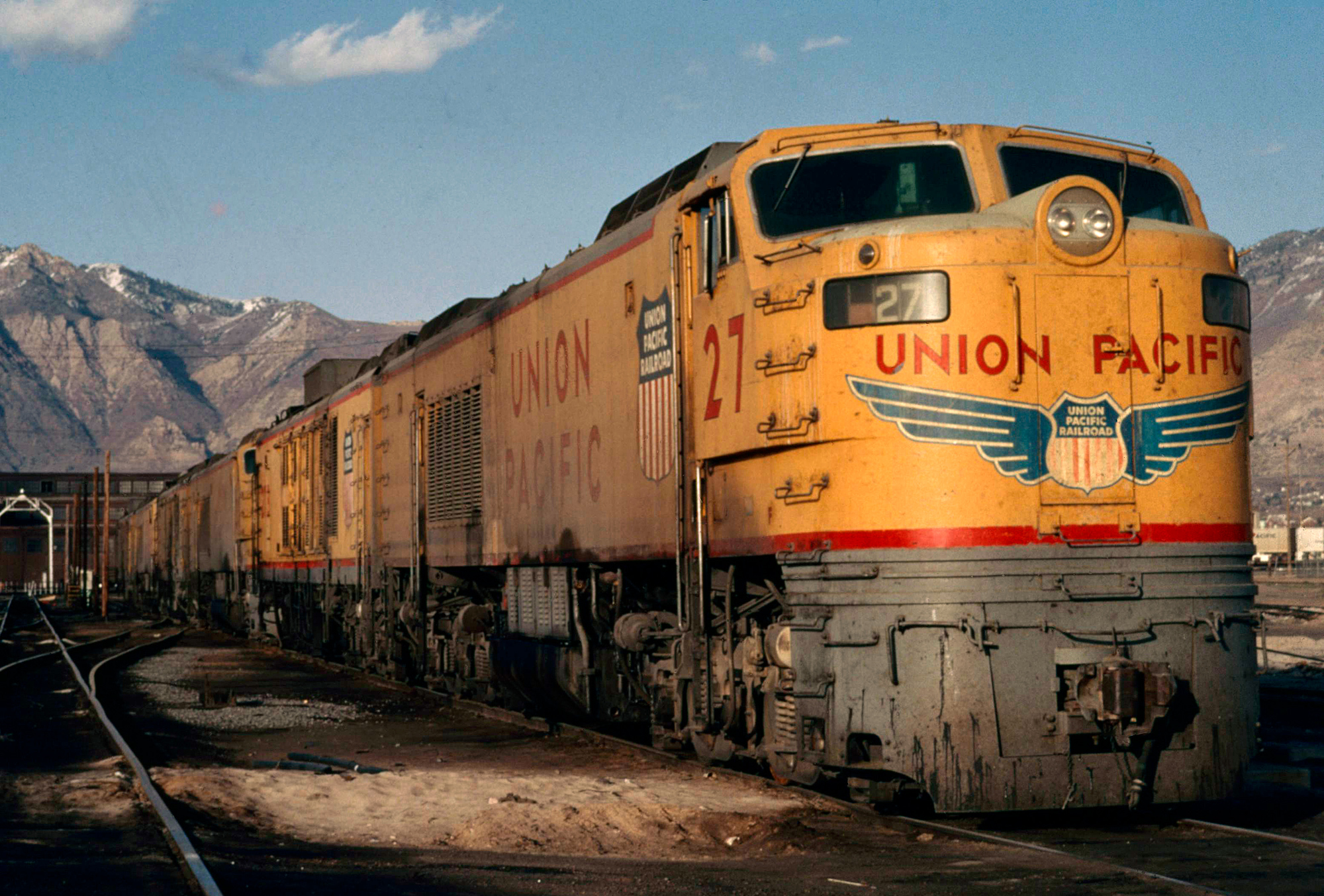 In general turbine locomotives are more efficient than standard reciprocating steam or diesel-electric designs due to fewer moving parts thus, in theory, they are supposed to be easier to maintain.

However, their significant drawback is that they require high speeds to achieve maximum efficiency, which simply wasn't practical on most railroads.

In the case of the steam turbine it also was prone to a myriad of mechanical issues and the design was scrapped across every railroad which tested it after just a few years of operation.

The gas turbine locomotive did not suffer from serious mechanical issues but its heavy fuel consumption caused most railroads to shy away from it.

In the case of the Union Pacific it determined that its relatively straight and flat main lines would allow for the model to retain high speeds while also being able to operate it relatively cheaply. 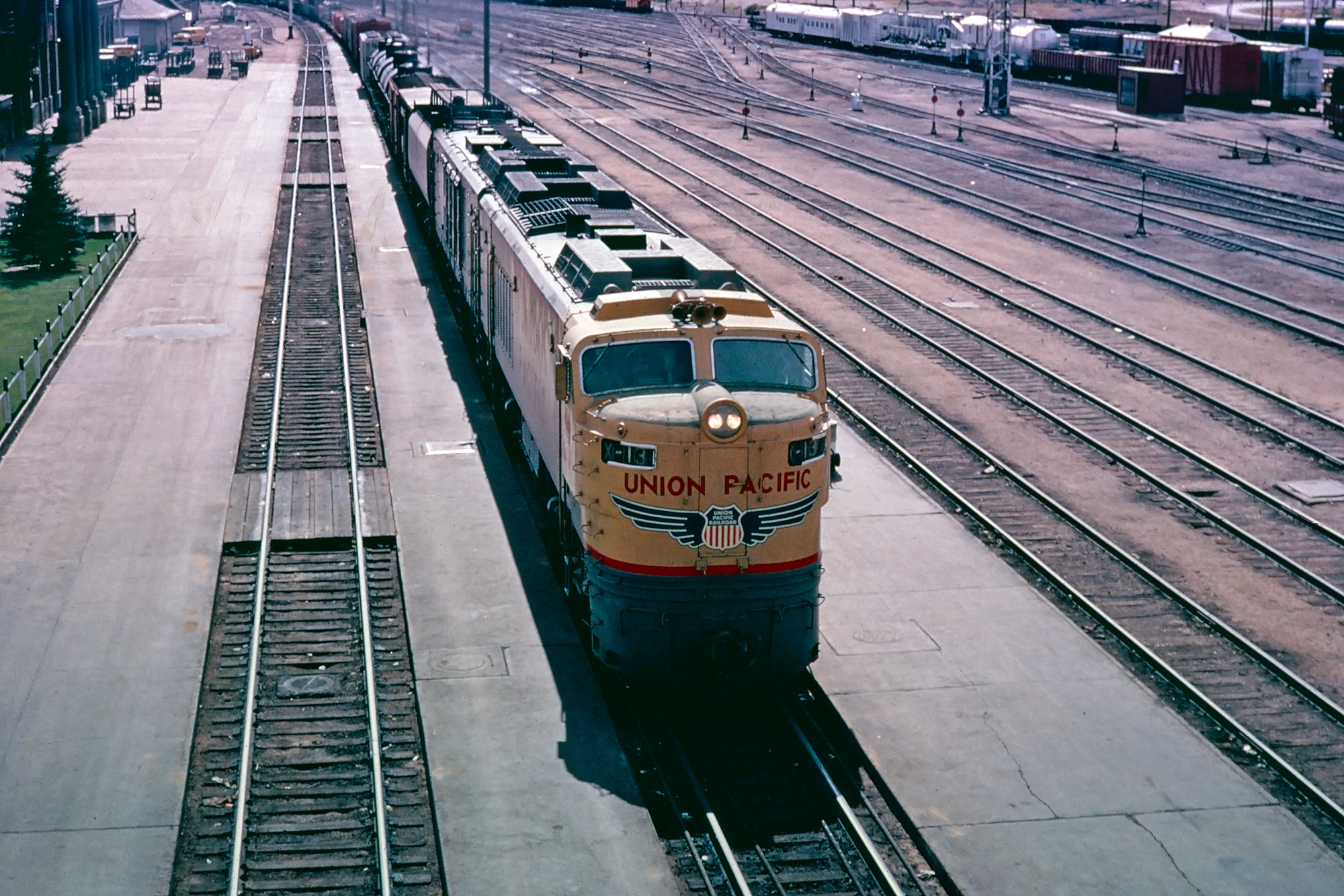 Union Pacific "Big Blow" #13, and its fuel tender, have a westbound freight in front of the station at Green River, Wyoming, circa 1965. American-Rails.com collection.

This was because the fuel used, "Bunker C" oil (a heavy, viscus substance), was inexpensive at the time.  The first order of UP's GE/Alco-built gas turbine locomotives were numbered 51-60, arrived in 1952, and carried specifications identical to the test model #50.

The UP intended to use them west of Salt Lake City in conjunction with the Southern Pacific but the locomotives were so loud, due to their turbines, that most California cities outlawed them.

In his book, "GE Locomotives," author Brian Solomon notes the original gas turbines burned fuel at a temperature of 1,400 degrees Fahrenheit within the combustion chamber; it was mixed with compressed air and the gas which in turn powered the turbine. 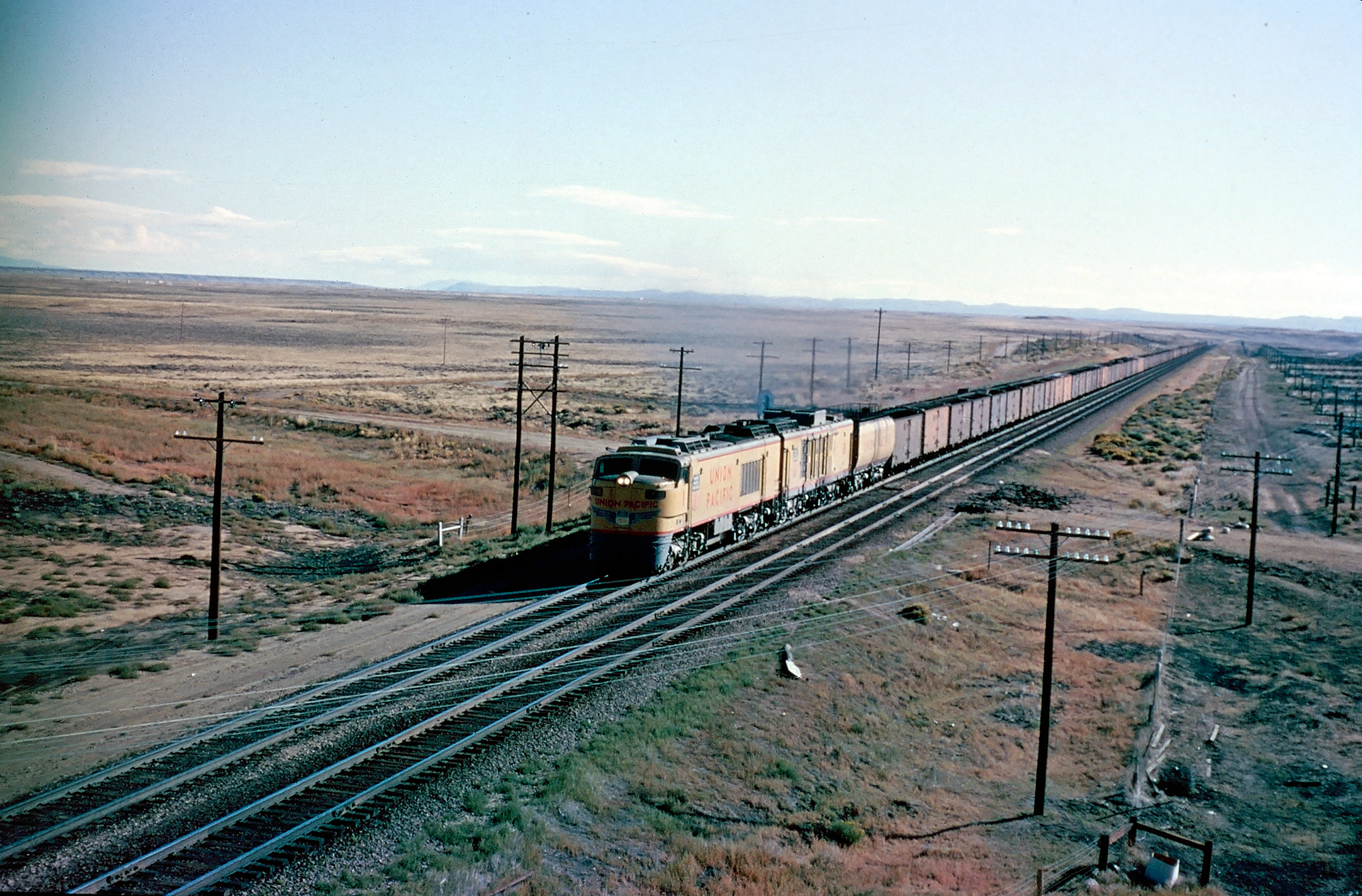 A Union Pacific "Big Blow" set hustles a block of refrigerator cars (reefers) westbound, east of Wamsutter, Wyoming as the train is about duck under the Route 789 overpass, circa 1965. American-Rails.com collection.

The exhaust shot out of roof vents at 150 MPH (when the locomotive was under full load) at temperatures reaching 850 degrees Fahrenheit.

It was all quite a spectacle and very loud.  While cheap, the "Bunker C" itself required that it be heated to 200 degrees Fahrenheit, and filtered, before it could be consumed.

Because of this, the GTELs were generally used between Council Bluffs, Iowa and Ogden, Utah. Union Pacific's second order of gas turbine locomotives arrived in 1954.

Numbered 61-74 these models were virtually identical to the original save for that they carried much larger 24,000 fuel tenders (the original ten carried just 7,200-gallon tenders although this was later upgraded to 24,000 as well). 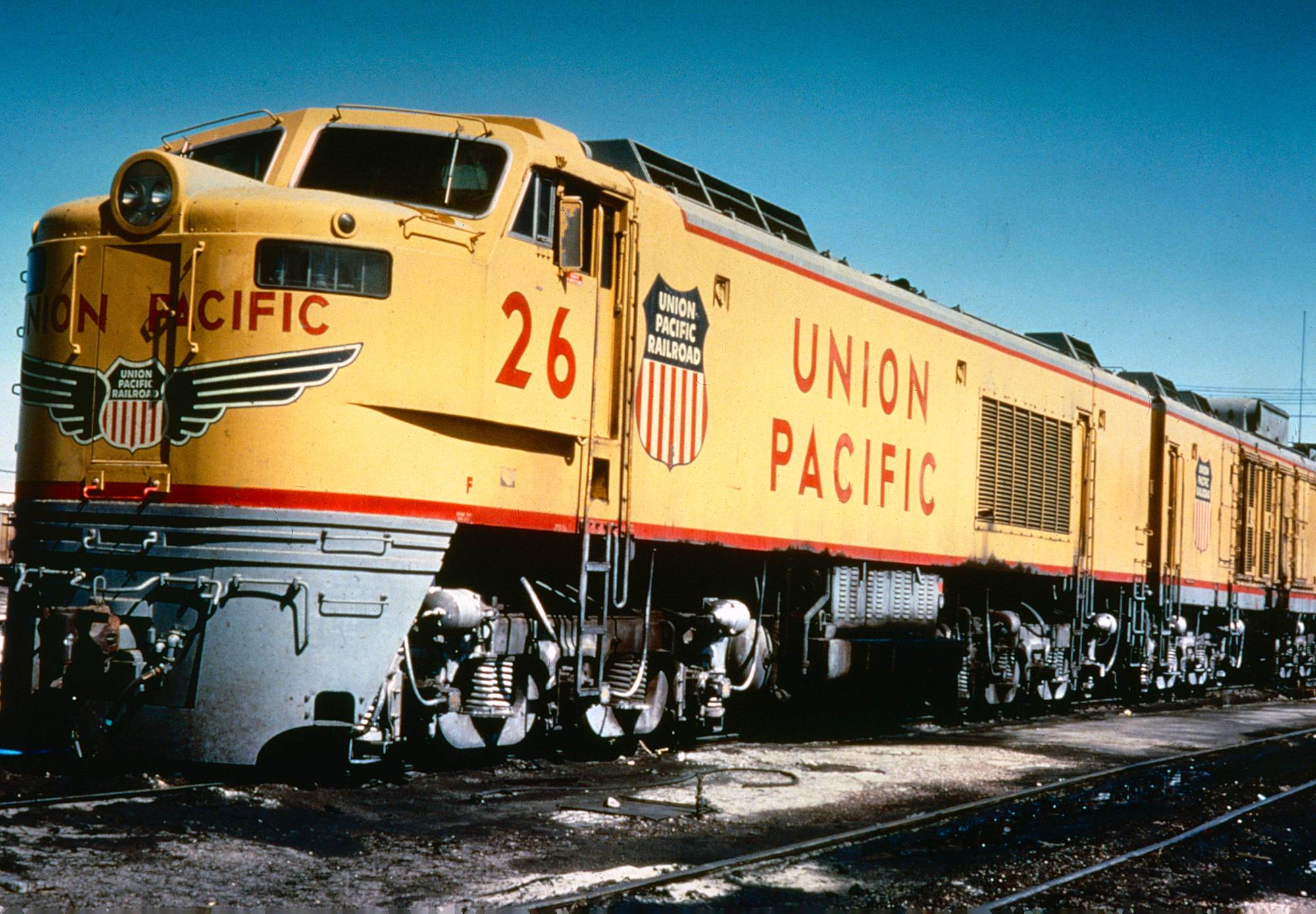 The most significant develop occurring with the "second generation" GTELs was that Union Pacific began successfully MU'ing them (meaning the trailing units could be controlled from the lead locomotive), although only nineteen were actually coupled this way.

UP's final order of gas turbine locomotives were numbered 1-30 and were quite different from the original 25. They carried a C-C+C-C wheel arrangement and featured two, semi-permanently coupled units enabling a single unit to produce an incredible 8,500 horsepower.

These final thirty GTELs were nicknamed "Big Blows" for the incredible noise they produced, even louder than the first 25 models (which was partly due to the fact that each unit included two turbines).

*     #50 was General Electric's prototype, numbered 101 during test trials, completed in November, 1948.  According to Brian Solomon's book, "GE Locomotives," it was identical to the other 1st generation variants except it featured a double-ended cab design.

It was tested for two years while GE worked out technical issues with the locomotive.  During that time it racked up some 106,000 miles in service.

**    The locomotives produced a total of 4,800 horsepower when at full load (6,700 RPM), 1,500 feet above sea level, and an ambient temperature of 80 degrees Fahrenheit.  However, 300 horsepower was required for secondary purposes to power other systems, leaving 4,500 horsepower for traction.

***   Auxiliary power for starting the turbine and operating locomotive at low speeds.

****  There were only minor differences between the 1st, and 2nd generation gas turbine designs.  The primary external change was the addition of walkways, offering crews access to interior compartments and the locomotive's rear.

***** The 3rd generation "Big Blows" could actually produce 10,700 horsepower via the A-B setup this design employed.  However, its electrical capacity could only handle 8,500 horsepower when under load.

In addition, UP provided these locomotives with a 23,000-gallon fuel tender (built from old steam locomotive tenders) to lengthen their service range. 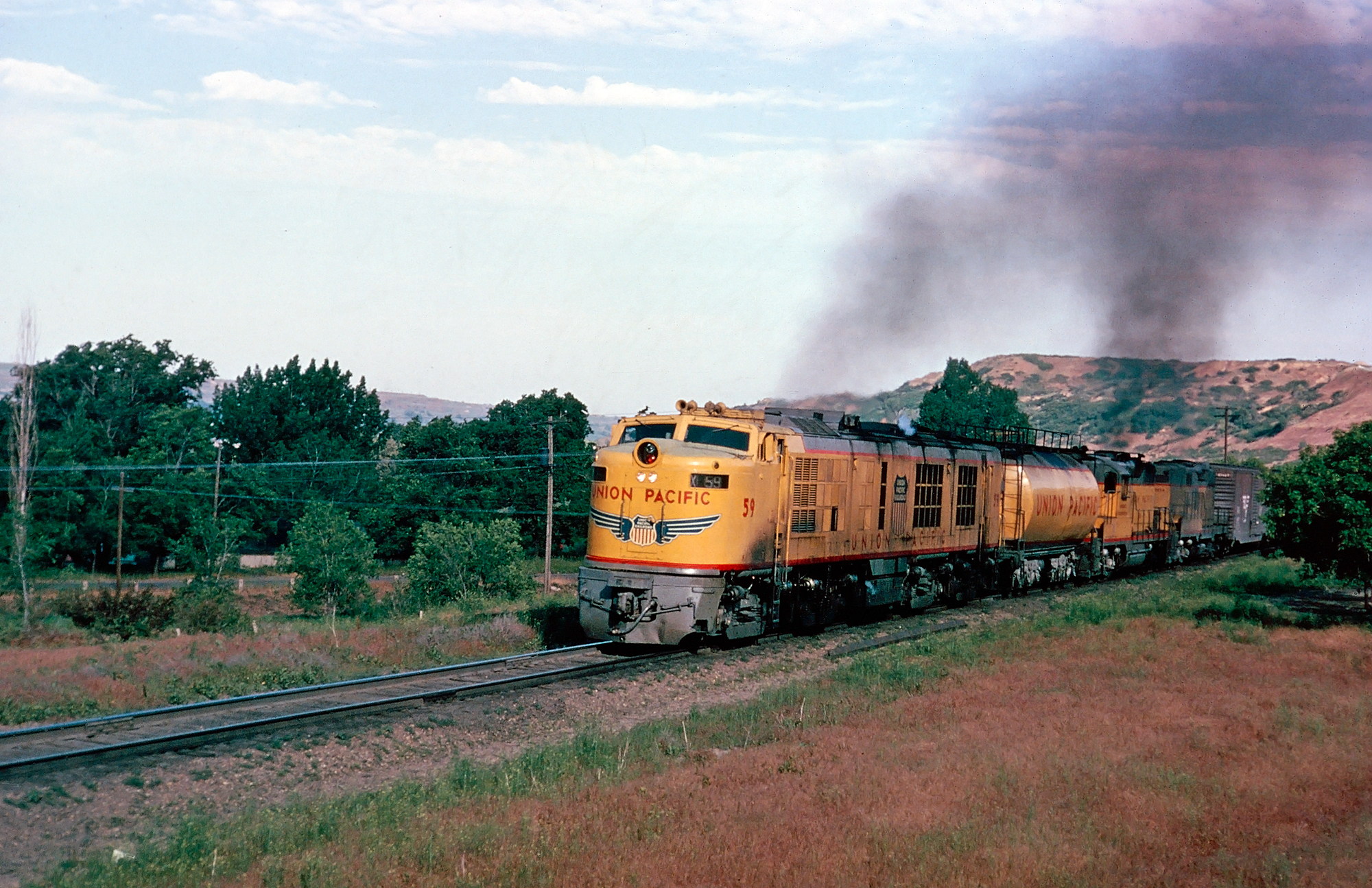 One of Union Pacific's 4,500 horsepower, first-generation gas turbines, #59, is seen here in service near Morgan, Utah (east of Ogden), circa 1960. A GP9/GP9B set appears to be assisting. American-Rails.com collection. 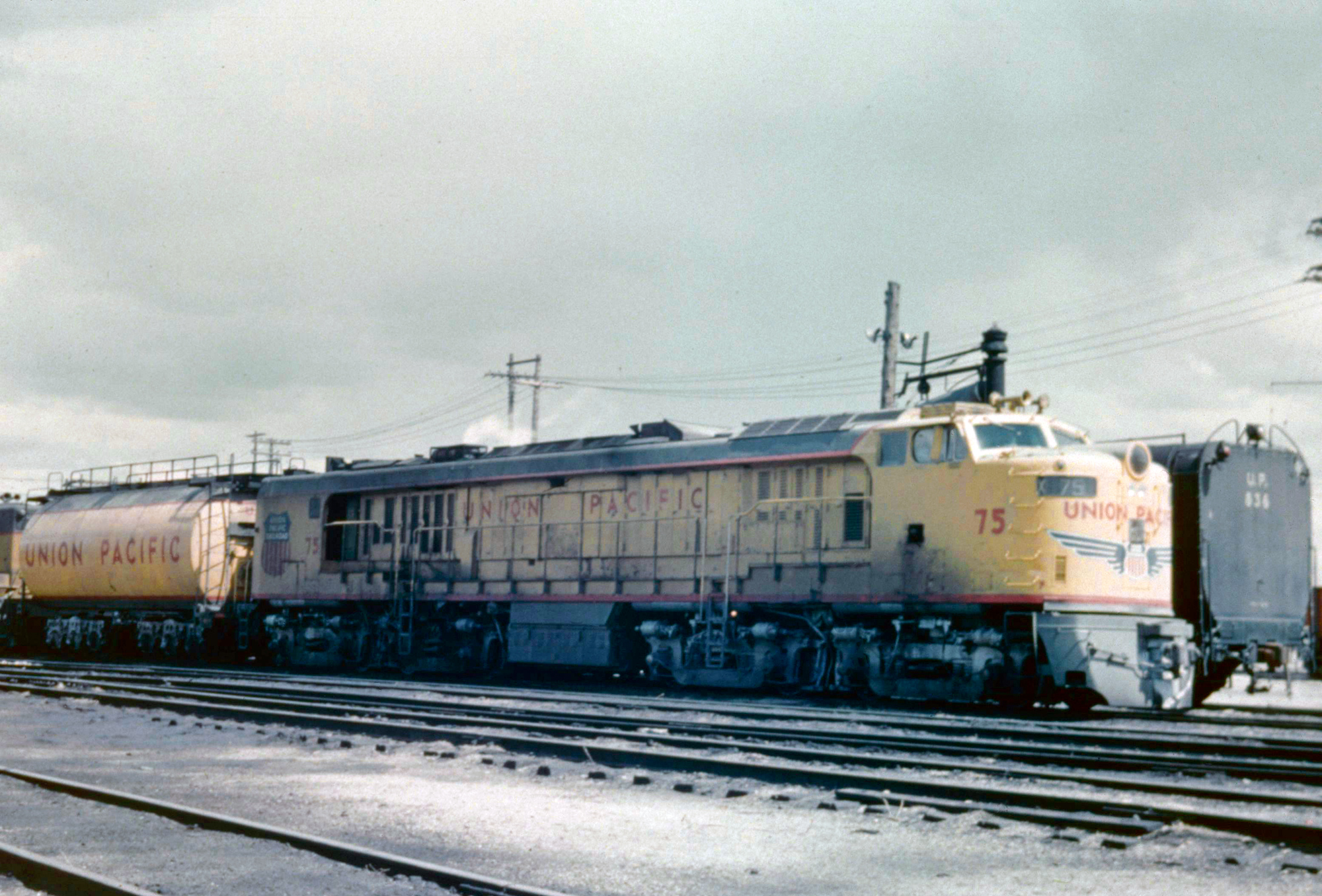 Union Pacific gas turbine #75, part of the 2nd generation referred to as "Verandas," is seen here in Cheyenne, Wyoming on May 18, 1963. Author's collection.

They were manufactured for two reasons: firstly, Union Pacific was quite pleased with its gas turbine fleet already in service; and secondly, the railroad was looking to replace its fleet of 4-8-8-4 "Big Boys" locomotives which, while powerful, UP did not want to overhaul with steam's impending demise.

With cheap fuel no longer available Union Pacific slowly began to retire their legendary fleet of GTELs and all were silenced by 1970.

Interestingly, their trucks were reused on GE's experimental U50 and U50C designs operated by Union Pacific.  Today, two of the gas turbines remain preserved, #18 at the Illinois Railway Museum and #26/26B at Ogden Union Station in Ogden, Utah.