Of all its passenger services, the George Washington was the Chesapeake & Ohio's best-remembered. The C&O offered high class trains for more than a century but never spent lavishly during the streamliner era.

Under president Robert Young, however, the railroad had planned to do so in the immediate postwar period with the purchase of millions in new lightweight equipment from Budd and Pullman-Standard as well as the launch of a new steam-turbine powered streamliner, The Chessie.

As Thomas Dixon, Jr. notes in his book, "Chesapeake & Ohio Passenger Service: 1847-1971," Young even boasted his Pullman order was the "largest ever" from an individual builder.

Unfortunately, the steep decline in rail travel after the war, coupled with the steam turbines issues, ended the endeavor.

The C&O did go on to acquire some new lightweight coaches, sleepers, parlors, lounges, and diners while all of the Chessie equipment was sold in the early 1950's.

Interestingly, except for a few cars, the C&O largely made do with refurbished heavyweight baggage and combine cars, even for its top trains.

Today, while the train's name is but a memory the route it followed is still used by Amtrak's Cardinal, running between New York - Washington - Chicago. 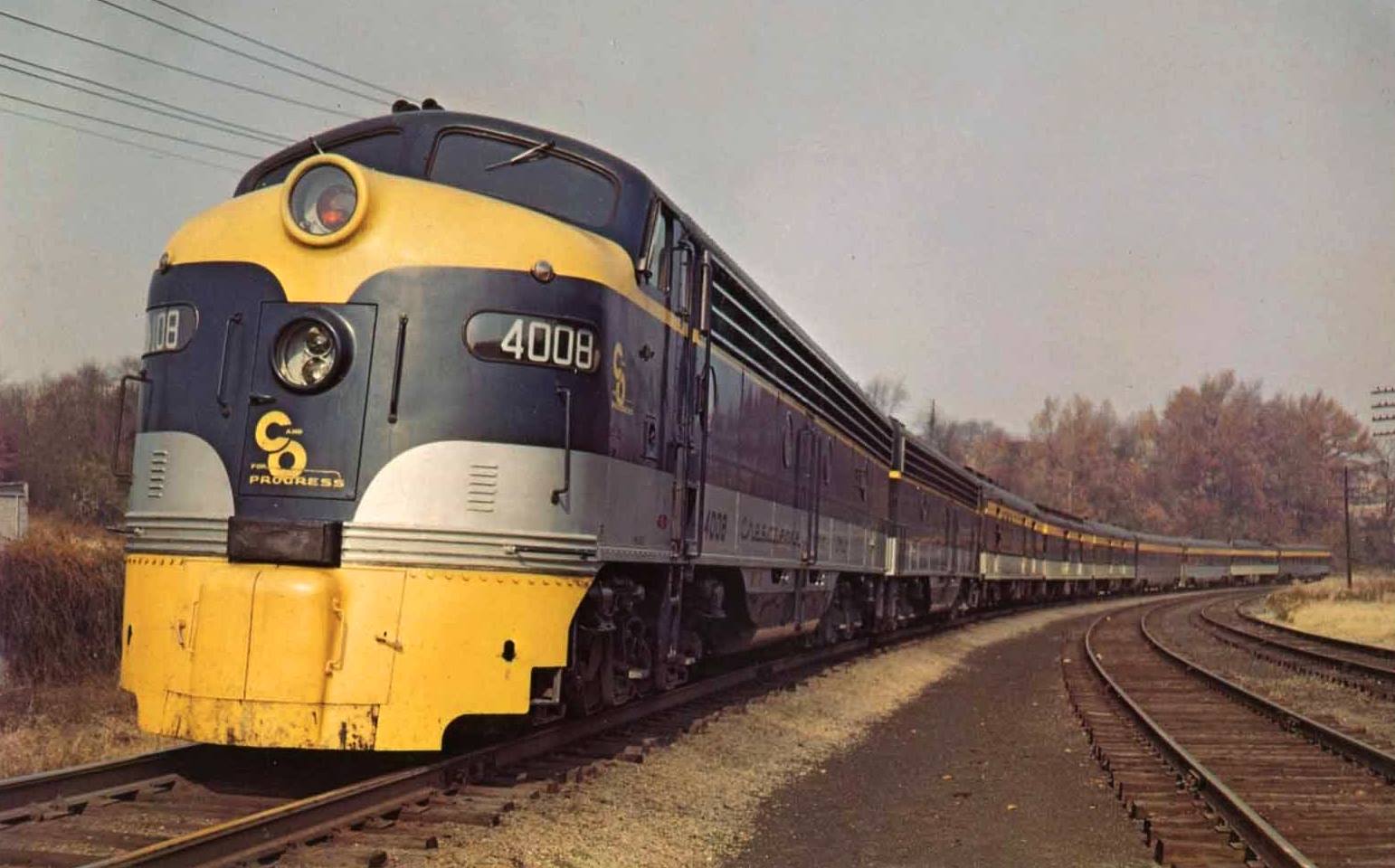 The C&O's modest passenger fleet is somewhat ironic considering it launched the most beloved and successful PR campaign of any railroad, Chessie the kitten, in 1933.

The mascot was used extensively for marketing purposes and is still widely recognized today.  The C&O was even working to launch a streamliner by that name during the 1940's but ultimately gave up on the idea.

The George Washington was inaugurated on April 30, 1932 in conjunction with the real George Washington’s birth, which had occurred 200 years earlier (but not on the same day), operating between Newport News and Cincinnati, with through sleeper service provided as as far as New York City and St. Louis.

The train itself followed the C&O’s super-scenic main line through the Appalachians and West Virginia's New River Gorge.  To promote the train the Chesapeake & Ohio used the now iconic Chessie, the kitten. 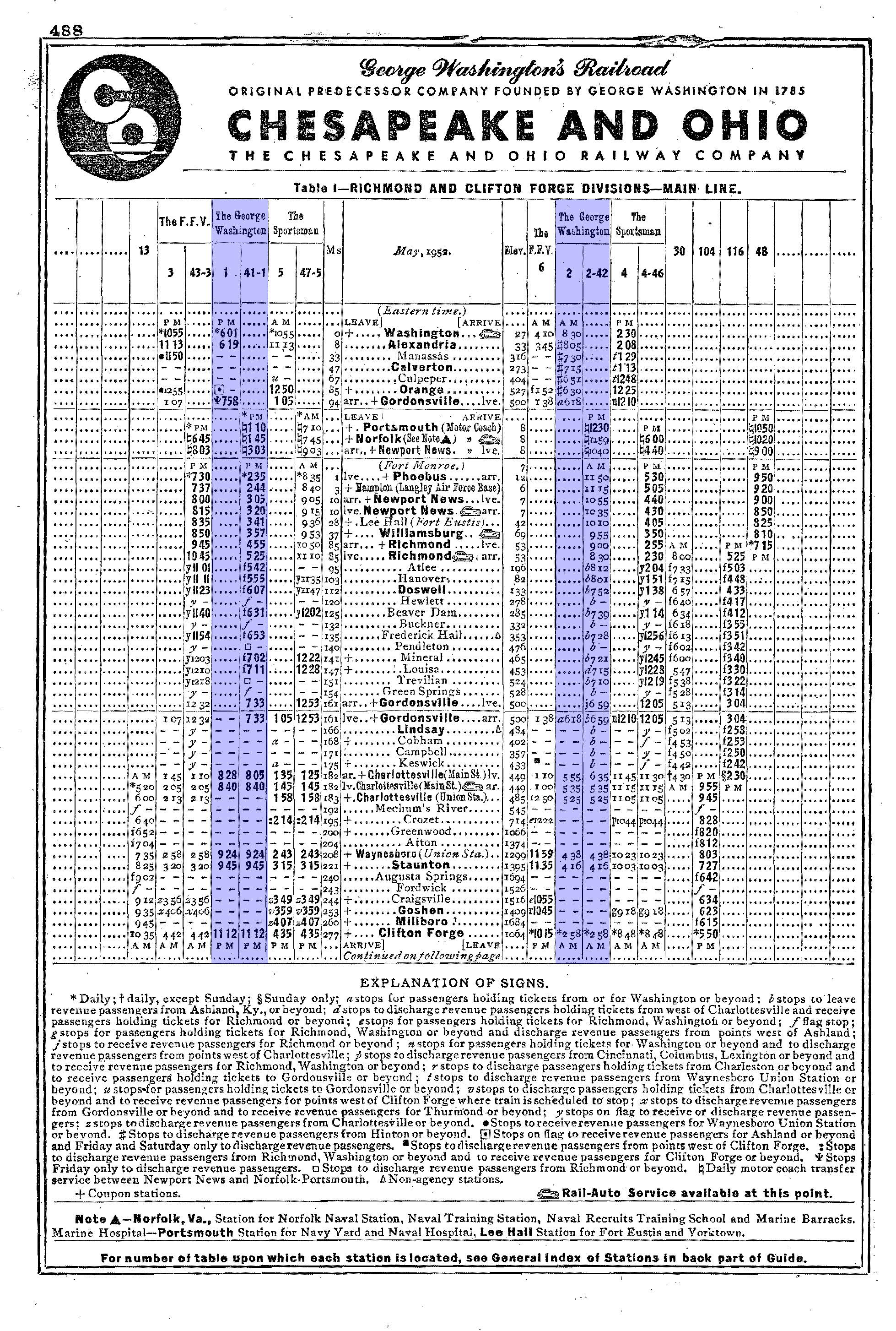 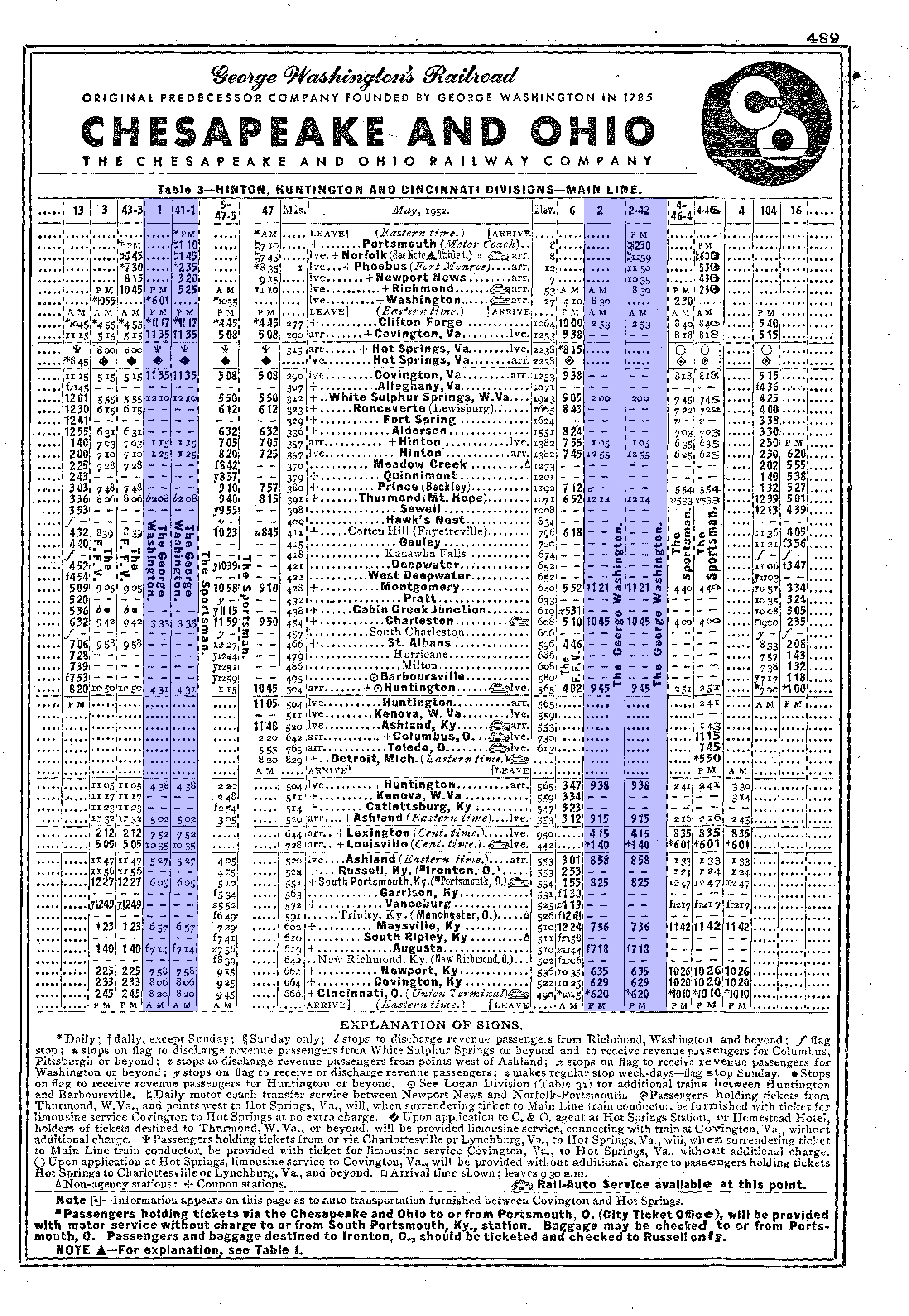 The creator of the sleeping kitten image was an artist by the name of Guido Grenewald but Chessie is credited to Lionel Probert, who was an assistant to the C&O president.

Probert, once he had permission to use the image, added "Sleep Like a Kitten"; within just a few years, Chessie had earned nearly legendary status!

The advertising campaign remains one of the most successful of all time and even today the Chesapeake & Ohio Railway Historical Society continues to sell calendars and other memorabilia featuring Chessie (when the kitten debuted demand was so high that the C&O could not keep enough merchandise in stock).

Of course, Chessie’s celebrity status did not end with merchandise and an advertising campaign, the kitten became synonymous with the C&O.

She earned renewed famed in 1972 when the Chessie System was unveiled, a holding company for the C&O, B&O, and Western Maryland.

The railroad's new paint scheme featured the kitten’s silhouette overlaid in the Chessie System "C."  The livery was a mix of vermilion, yellow, and blue.

The original George Washington was decorated in the Colonial period, from the era of George Washington himself, and featured all of the latest creature comforts for passengers such as carpeting and air-conditioning.

The stateliness of the train, along with its spectacular scenery through western Virginia and the Blue Ridge, West Virginia and the New River George, and portions of Kentucky through the western Appalachians soon transformed the George Washington into the C&O’s flagship train.

Its popularity even surpassed the railroad’s top service of the period, the Fast Flying Virginian; couple this with the fact that the George served a number of elegant and charming hotels, notably the world-famous Greenbrier Resort (a Chesapeake & Ohio-owned facility). 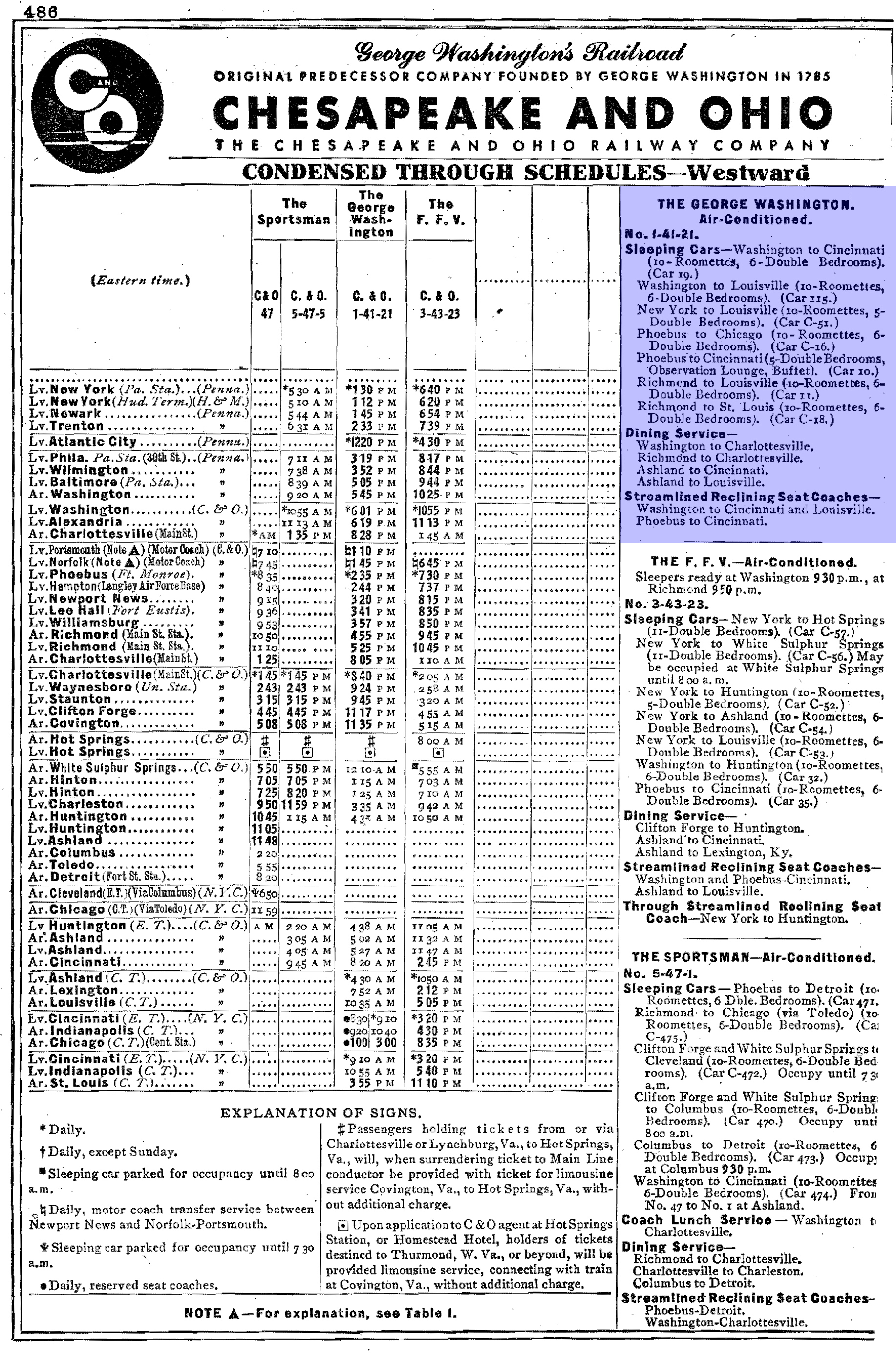 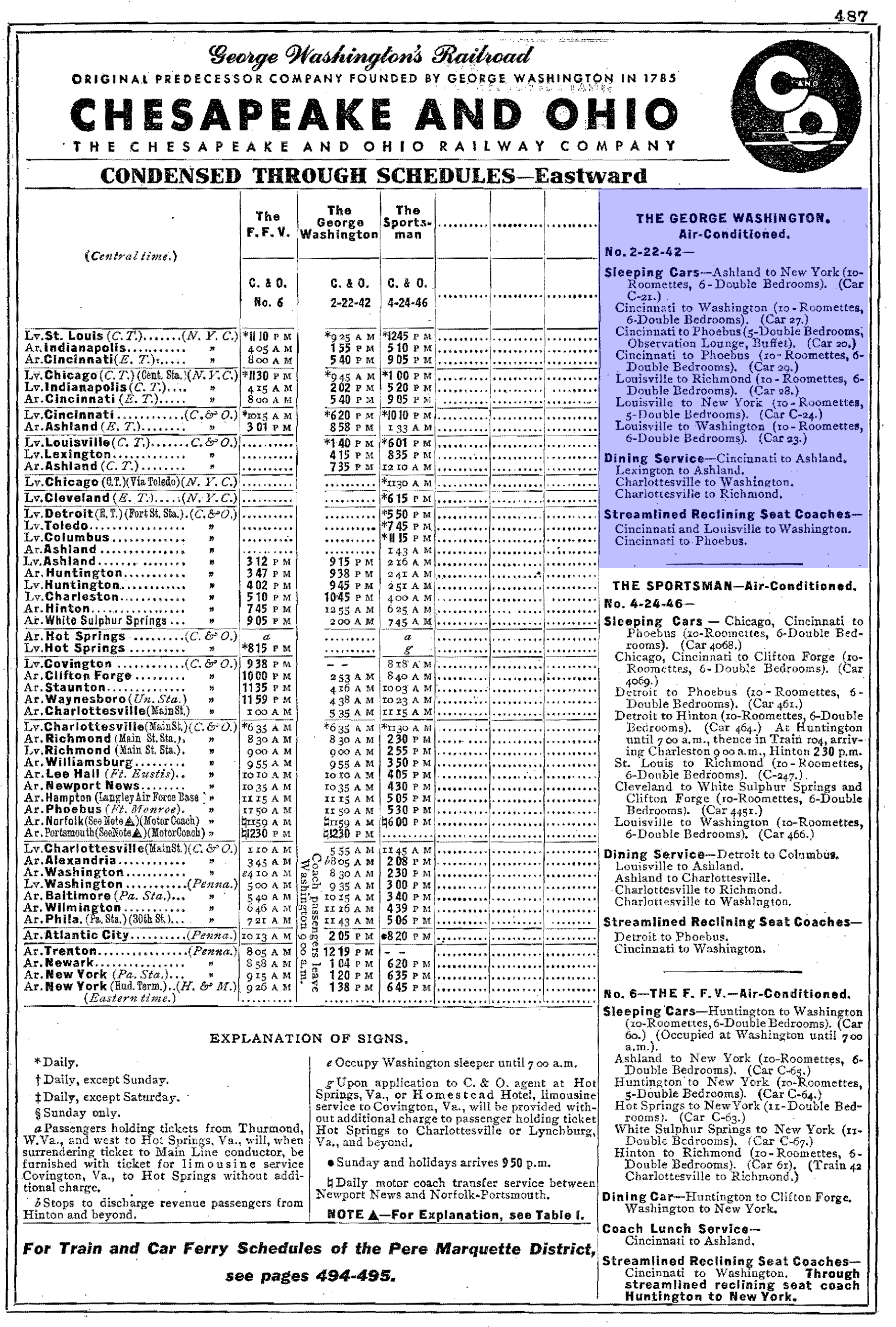 Listed as trains #1 (westbound) and #2 (eastbound) on the C&O's official timetable the train could reach New York City, via the Pennsylvania Railroad and available Pullman/sleeper service, or St. Louis, via the Baltimore & Ohio.

In the early 1950s the train was updated with lightweight, streamlined equipment including matching EMD E-series diesels, adorned in a beautiful livery of blue, yellow, and gray. 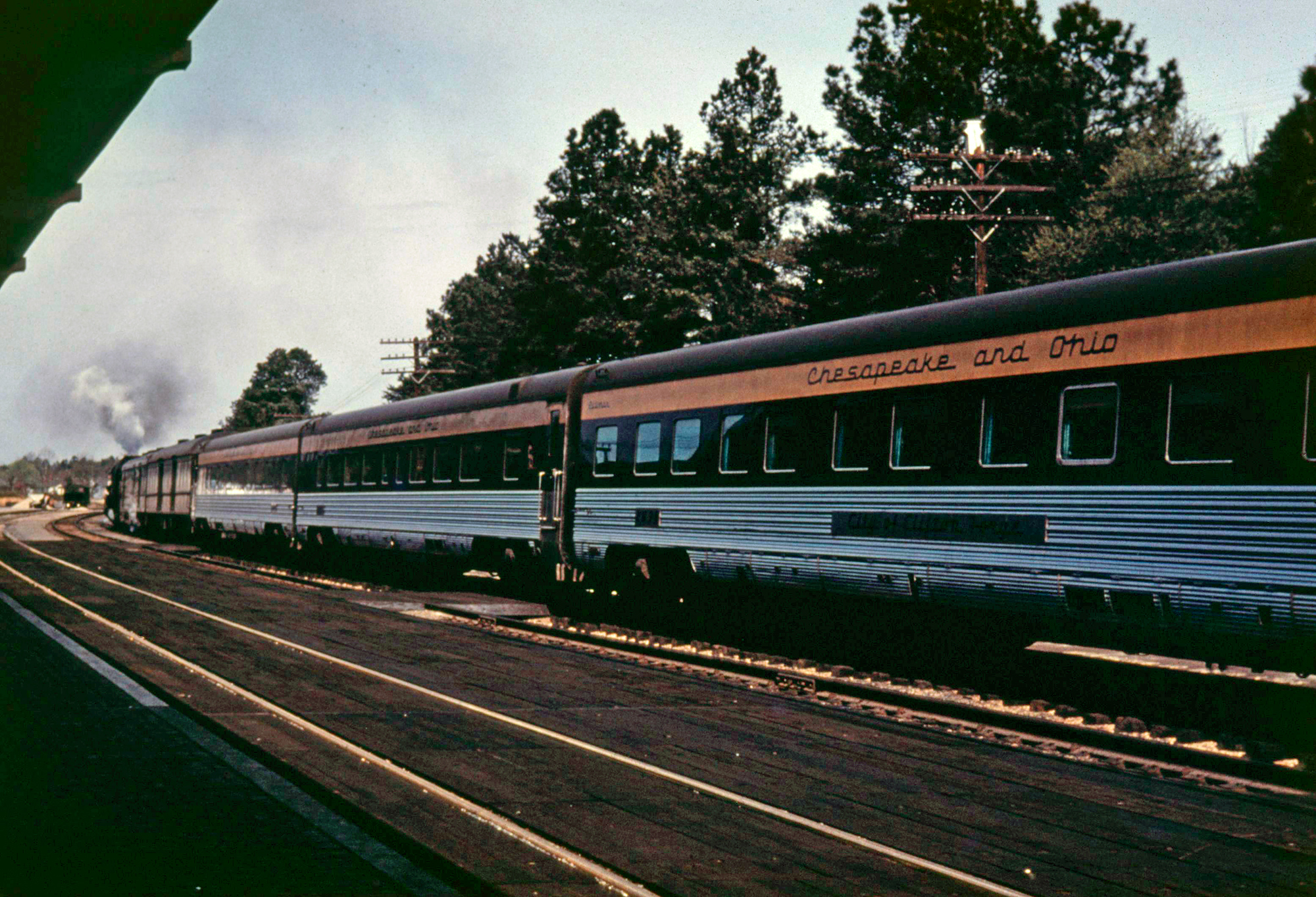 Chesapeake & Ohio's Newport News section of the "George Washington" departs westbound from Williamsburg, Virginia during a summer's morning in the early 1950's. Nearest the photographer is one of C&O's 10 roomette/6 double-bedroom Pullmans, the "City of Clifton Forge." Author's collection.

According to Mr. Dixon's book, in the summer of 1963 the C&O, having gained controlled of the Baltimore & Ohio by that point, transferred a slumbercoach, sleeper, and standard coach from the B&O's National Limited (Baltimore/Washington - St. Louis) and transferred to George Washington.

This was move was temporary at the time due to the B&O's major daylightling project ongoing along the Parkersburg Branch section (Clarksburg - Parkersburg) of its St. Louis main line at the time.  This arrangement, however, was later made permanent in both directions in 1965.

It lasted until the end, when Amtrak took over intercity passenger rail operations on May 1, 1971. Today, you can still ride virtually the same route as the original GW under Amtrak’s Cardinal.