The property which became the Gateway Western Railway (GWWR) enjoyed an erratic, roller-coaster history of success and failure.  It all began long before the Civil War, launched as an effort to open service across northwestern Illinois.  The fledgling system later became the Chicago & Alton, and eventually established through service within the hotly contested St. Louis - Chicago - Kansas City corridor.  It subsequently went through several owners before winding up under the Baltimore & Ohio's control in the 1930's.  Depression struggles caused the B&O to abandon its plans and the Gulf, Mobile & Ohio acquired the road after World War II.  It remained part of the Rebel Route until the Illinois Central Gulf era.  By the 1980's, ICG was struggling financially and opted to sell most of the old C&A to new regional startup Chicago, Missouri & Western.  For several reasons this company quickly failed.  It was on the brink of liquidation when Santa Fe and Southern Pacific stepped in.  The AT&SF wound up with the Kansas City to St. Louis line, which became Gateway Western. The GWWR became successful largely due to the Santa Fe which spent the millions needed in infrastructure improvements while dispatching considerable business into St. Louis.  Following the 1995 Burlington Northern Santa Fe merger, GWWR's route was no longer needed allowing Kansas City Southern to gain control.  Today, KCS continues utilizing Gateway Western as a vital link within its system. 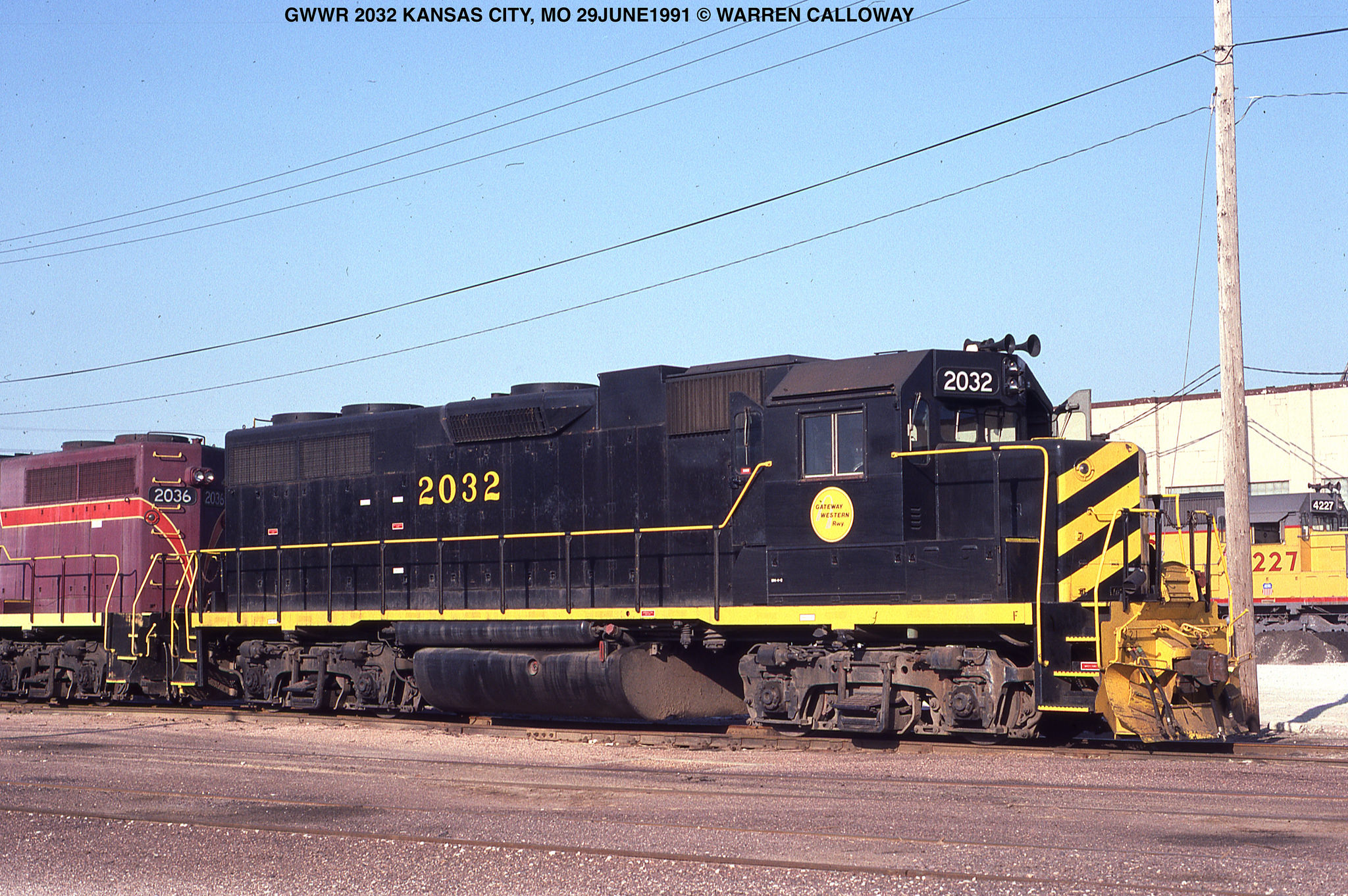 A History Of Gateway Western's Lines

While the former Chicago & Alton lines carry a rich history dating back more than 170 years, Gateway Western was an extremely short-lived operation surviving less than a decade.  Because of this there has been little written about the railroad.  During the fall of 1992, historian Michael Blaszak authored a three-part series on the company featured in Trains Magazine entitled, "The Chicago, Missouri & Western Story."  If you are interested in or would like to learn more about the GWWR these articles are highly recommended!  As Mike Schafer notes in his book, "More Classic American Railroads," the route's heritage began as the Alton & Sangamon Railroad chartered on February 27, 1847.  It was envisioned to link Alton (located just north of St. Louis) with the Illinois state capital of Springfield.   By 1852 the line was ready for service  That same year, on June 15th, it was renamed as the Chicago & Mississippi with much loftier goals of establishing service between its namesake locations.  A series of events transpired after 1855, which completed its link to the Windy City; first Joliet was reached that year.  To access Chicago, trackage rights were granted over the Rock Island for about a year until the Joliet & Chicago (chartered in 1855) opened in 1856.

Resources About The Gateway Western

Photos Of The Gateway Western

In 1857 the entire operation was renamed as the St. Louis, Alton & Chicago.  Just prior to the Civil War the Chicago & Alton Railroad was formed on February 18, 1861 and acquired the StLA&C's assets.  To the south, direct entry into St. Louis came via the Alton & St. Louis; chartered on February 4, 1859 it was completed between East St. Louis and Alton by 1865.  The St. Louis - Chicago route constituted C&A's eastern segment; its western route came through lease during the 1870's; in 1870 it leased the Louisiana & Missouri River and did the same with the Kansas City, St. Louis & Chicago in 1878.  Together, these railroads established service from Kansas City to St. Louis via Louisiana and Mexico, Missouri.  Despite access to three of the Midwest's biggest cities the C&A struggled as the years passed.  Different owners such as the B&O, Nickel Plate, Union Pacific, and Rock Island had ideas for the property, none of which ever materialized.  The most ambitious was the B&O's plan.  According to the book, "Baltimore & Ohio Railroad," by Kirk Reynolds and David Oroszi it acquired the bankrupt C&A in 1929, renaming it as the Alton Railroad.

The eastern trunk line and its legendary president, Daniel Willard, sought the carrier as part of a through route from Baltimore to the Midwestern gateway of Kansas City.  Unfortunately, the tough years of the 1930s and the B&O's own struggles caused the company to lose interest, even after launching a new streamliner, the Abraham Lincoln.  The Alton was allowed to slip into bankruptcy in 1942.  It was then subsequently purchased and merged into the Gulf, Mobile & Ohio on May 31, 1947.  The GM&O had been formed in 1938 through the merger of the Gulf, Mobile & Northern and Mobile & Ohio.  As Mr. Blaszak's article, "The Chicago, Missouri & Western Story - 1: The Road Of Misfortune" from the September, 1992 issue of Trains Magazine points out, the C&A lines had been successful early on but then struggled as competition increased.  Under GM&O ownership the property had some success, particularly in handling coal movements from southern Illinois to Commonwealth Edison's coal-fired power plants around Chicago.  However, after the August 10, 1972 merger with Illinois Central, which formed Illinois Central Gulf, the former C&A lines were largely neglected except between Springfield and St. Louis.  As a result, slow orders became rampant.

The success of the ICG merger has often been debated since IC and GM&O were largely competitors within the same territory.  As the red ink deepened a desperate ICG decided to shed thousands of miles in an effort to regain profitability.  It spent the 1980's selling off large segments of its network, such as the Gulf & Mississippi Railroad (The first big ICG sale in 1985 it operated 713 miles located primarily in Mississippi, Tennessee, and Alabama.  The G&M was purchased by the MidSouth Rail Corporation in 1988, acquired by Kansas City Southern in 1994.) and Chicago Central & Pacific Railroad (This regional operated the Iowa Division west of Chicago.  Ironically, these lines were re-acquired by IC in 1996.).  The last transaction involved shedding the former C&A lines.  It took some time to complete since a handful of regional Amtrak services utilized the route.  After the details were ironed out, ICG announced on July 29, 1986 it would sell to Venango River Corporation 631 miles of the old C&A between Joliet and St. Louis, as well as the westward extension to Kansas City.  This was the entirety of the original C&A, save for the line north of Joliet which was retained by ICG. 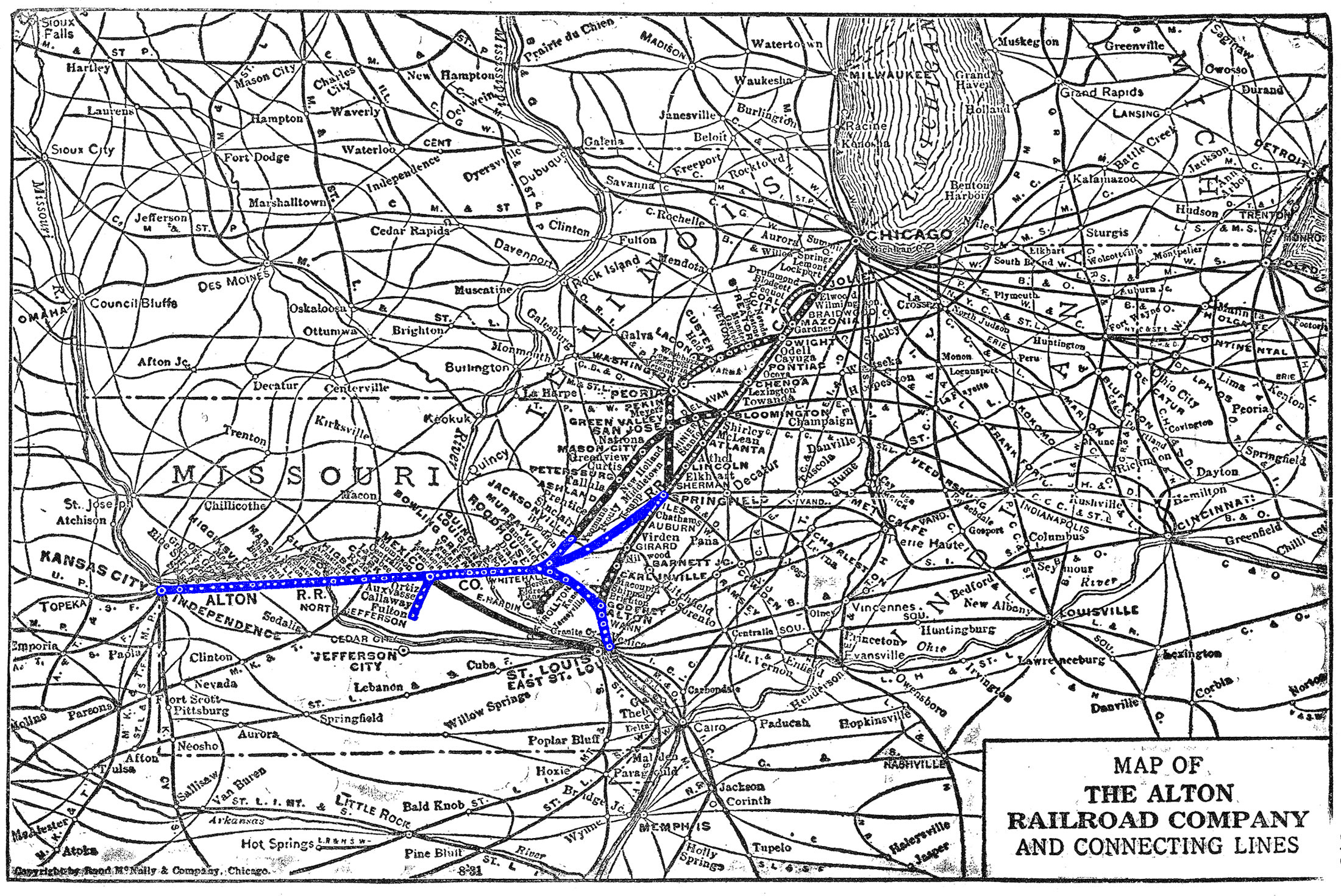 For an idea of the Gateway Western's operating territory, here is a 1931 system map of the Alton Railroad (Chicago & Alton). Author's collection.

A few years prior Venango had also acquired the Chicago, South Shore and South Bend Railroad's freight services from the Chesapeake & Ohio/Chessie System, a legendary interurban located on the southeast side of Chicago.  It had survived via a strong industrial base, a fact which the new owners wished to exploit.  By acquiring the former C&A lines they intended to generate higher revenues via longer hauls while reaching additional interchange points in the process.  On the afternoon of May 5, 1987 the new Chicago, Missouri & Western Railway officially launched.  The carrier immediately ran into a myriad of problems including deteriorating track conditions, income far below projections, cars being incorrectly routed (yard clerks misinterpreted its CMNW reporting marks to mean Chicago & North Western's "CNW" markings), and Illinois Central Gulf failing to live up to its agreed "Traffic Protective Agreement."  In short, this document required ICG to aid the new regional by helping it maintain current traffic levels. Unfortunately, the exact opposite occurred; no longer having any vested interest in the property, the Class I acted as the competitor it now was and worked to pull away as much traffic as it could from its former lines.

Not surprisingly, the CM&W suffered immensely.  The ICG's actions eventually led to a lawsuit and settlement in the CM&W's favor ($7.5 million) although not before the railroad had entered bankruptcy on April 1, 1988.  As creditors sought liquidation it appeared very likely the entire railroad would be ripped up to satisfy outstanding debts.  Its saving grace, ironically, turned out to be Amtrak.  The national carrier served the densely populated region between Chicago and St. Louis with the old C&A offering the best routing between these points.  The state could not allow the corridor's abandonment and approved an emergency financial package to maintain passenger service.  This effort also bought time to find a buyer.  Since the trackage still needed considerable capital improvements to ensure its long-term survival, efforts turned to finding an interested Class I.  Two ultimately stepped up, the Atchison, Topeka & Santa Fe and Southern Pacific.  Through its subsidiary, St. Louis Southwestern Railway (Cotton Belt), SP had long been a player into the Gateway City.  However, it had never enjoyed a coveted Chicago connection and acquiring the former CM&W offered just such an opportunity.  While SP showed interest, Santa Fe also saw potential in the Kansas City extension to finally establish its own long-sought market, St. Louis.

The SP acquisition was fairly straightforward although Santa Fe's involvement was more complicated.  Mr. Blaszak's article, "The Chicago, Missouri & Western Story - 2: Out Of One Railroad, Two" from the October, 1992 issue of Trains Magazine notes Santa Fe was unable to directly purchase the Kansas City - St. Louis line due to its loan obligations.  However, a New York bank offered to act as a sort of intermediary, Wertheim, Schroder & Company, a firm which had been involved in a number of other short line and regional transactions. After offers and counter-offers between the Class I's it was decided the CM&W would be split; Southern Pacific would get the 246-mile East St Louis-Joliet line for $22 million and Wertheim/Santa Fe would pick up the remaining 284-mile Kansas City - Godfrey, Illinois segment (400 miles in all) for $24 million.  Finally, the two would jointly-own the Godfrey - East St. Louis section.  The agreements were finalized between September 29th and October 26th, 1989.  The Southern Pacific ran its first train on the morning of November 9th while the Gateway Western Railway (GWWR) entered the railroad business on January 10, 1990.  As part of the Wertheim/Santa Fe partnership, the legendary western road agreed to finance track upgrades and lend its established marketing department to grow business.  For its part, the new GWWR was still a separate system and would need to establish its own freight base while the Santa Fe focused on long-haul traffic.

When the Chicago, Missouri & Western began operations it decided to adorn its locomotives in a striking maroon livery with a darker maroon stripe running the carbody's length.  Its logo hearkened back to the Chicago, Aurora & Elgin's emblem with "Chicago, Missouri & Western" placed within.  Into the Gateway Western era a much simpler black scheme with yellow trim and lettering was used, nicknamed the "Bumblebee" scheme.

The above roster information is courtesy of Michael Blaszak's article, "The Chicago, Missouri & Western Story - 3: Flight Of The Bumblebee" from the November, 1992 issue of Trains Magazine.  This data came direct from Gateway Western Railway at that time. 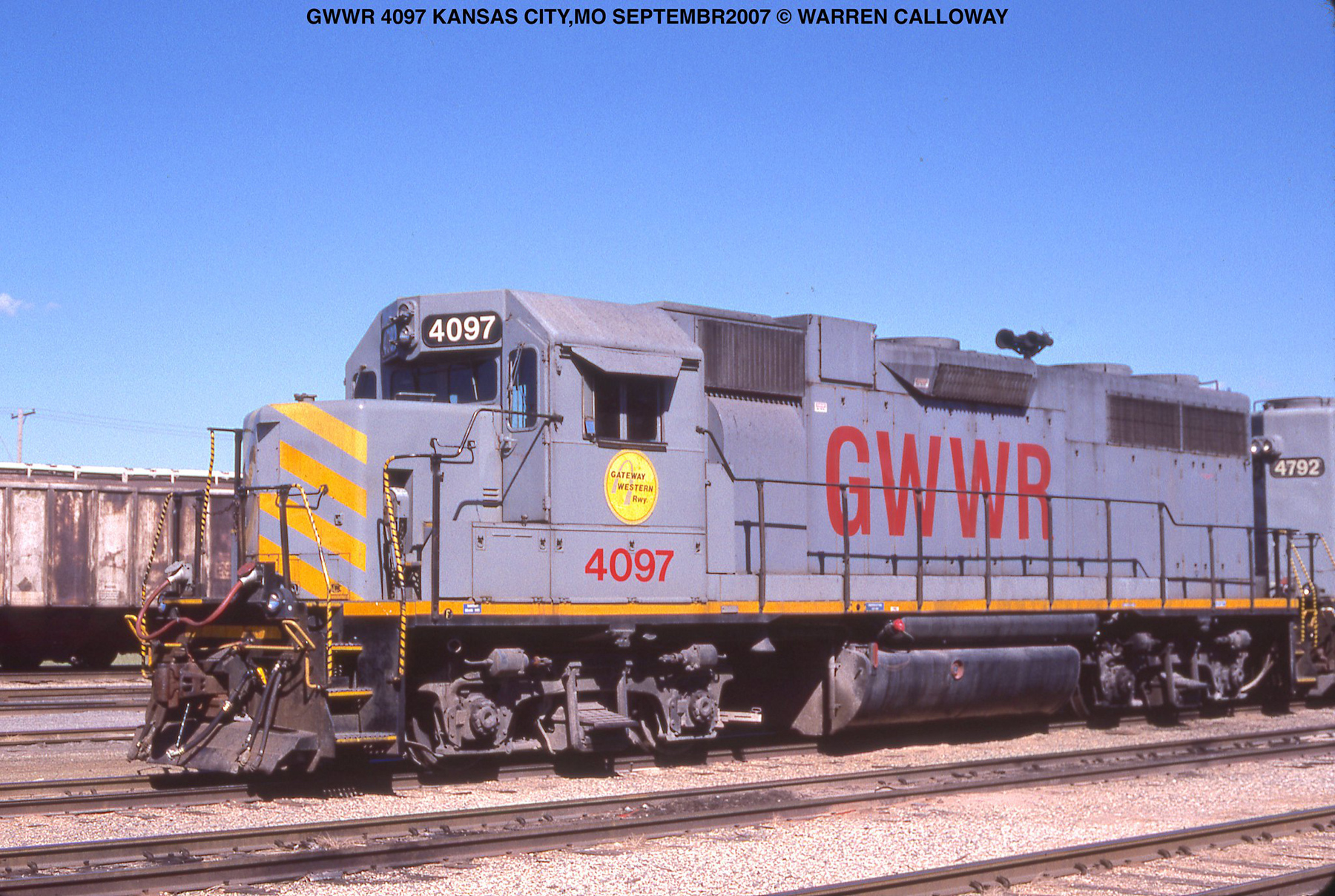 For the AT&SF, intermodal eventually became the dominant freight along with potash, agriculture, coal, and general merchandise.  Mr. Blaszak's article, "The Chicago, Missouri & Western Story - 3: Flight Of The Bumblebee" from the November, 1992 issue of Trains Magazine notes that Santa Fe's business increased five-fold when it was able to establish regular service during April of that year.   The much-needed track improvement program also began at this time, utilizing second-hand 115-pound welded rail to bring track speeds up to Class III standards (40 mph).  The project was completed by 1993.  For the GWWR, it would eventually abandon its own through freights, allowing Santa Fe to handle this exclusively. Instead, it shifted attention to local movements and drumming up line-side business with which it had much greater success.  After only a few years of operation the Santa Fe dropped service over the Gateway Western when merger with Burlington Northern was announced in 1995.  The BN already maintained two lines into the Gateway City and GWWR's route was no longer needed.  Now on its own, Kansas City Southern eyed the road for its own entry into St. Louis.  It completed the takeover on May 5, 1997 and today remains an important component of that Class I's network.