The Hell Gate Bridge is another of New York City's many feats of engineering. Officially constructed by the New York Connecting Railroad this company was fully controlled by the Pennsylvania Railroad and thus the PRR entirely funded the project.

While the bridge's iconic steel-arch span, which crosses the East River, is its endearing feature the entire structure is much larger and stretches over three miles in length from end-to-end. During the PRR-era the bridge was an important link for several different railroad not just its owner.

Today, the bridge remains an important artery as part of Amtrak's Northeast Corridor and continues to carry freight traffic for CSX, Norfolk Southern, and Providence & Worcester.  While the span's name conjures dark thoughts there is actually a rather simple explanation for its designation (explained below).

The bridge has direct ties to the PRR's massive Pennsylvania Station project under construction in downtown Manhattan at the time, ongoing since 1902.

It was part of an extension from Long Island (and the PRR-controlled Long Island Rail Road) whereby tracks would head north, pass over the East River via the Hell Gate Bridge and offer a connection with the New York, New Haven & Hartford Railroad for through service into New England (this segment would not open until the 1916 completion of Hell Gate). 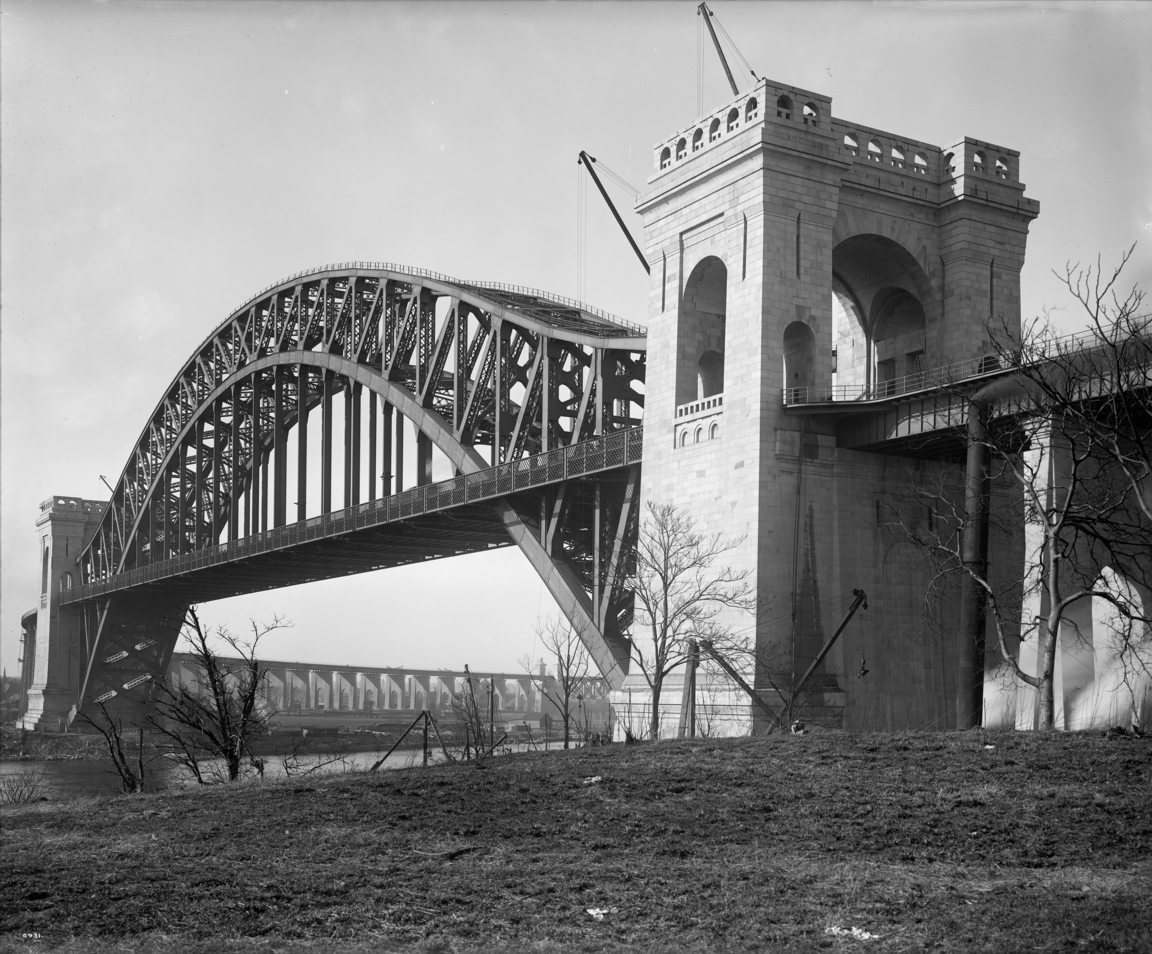 A view of the recently completed Hell Gate Bridge, circa 1916. Photo by the Detroit Publishing Company.

While Hell Gate Bridge has a quite ominous name it has no symbolic meaning and only describes the region of the East River in which the structure spans (which is notorious for having deadly currents).

The bridge was originally known as the East River Arch Bridge but the name was changed to better reflect the area in which it was located (the bridge is also sometimes called the Hell's Gate Bridge).

The project had its earliest beginnings dating back to 1892 when then Pennsylvania Railroad president Alexander Cassatt (who also oversaw the railroad building its legendary Pennsylvania Station in Manhattan) envisioned a bridge to not only connect his western lines with the PRR-controlled Long Island Rail Road but also give the company direct access to New England railroads like the New York, New Haven & Hartford (the New Haven).

He consulted with engineer Oliver Barnes and bridge designer Gustav Lindenthal on a bridge which would not only span the East River, Ward's Island (where a mental hospital was located, it would force the bridge to include a rather sharp curve to avoid the property), and Randall's Island but also the communities of Astoria, Queens and the South Bronx.

Entire libraries could be written on the Pennsylvania Railroad ranging from its history to the different businesses it owned, far, far too much to cover here which is a mere brief history of the railroad. The Pennsy was an institution to the City of Philadelphia and State of Pennsylvania. For over 100 years the keystone represented the PRR as much as it did the State of Pennsylvania itself. 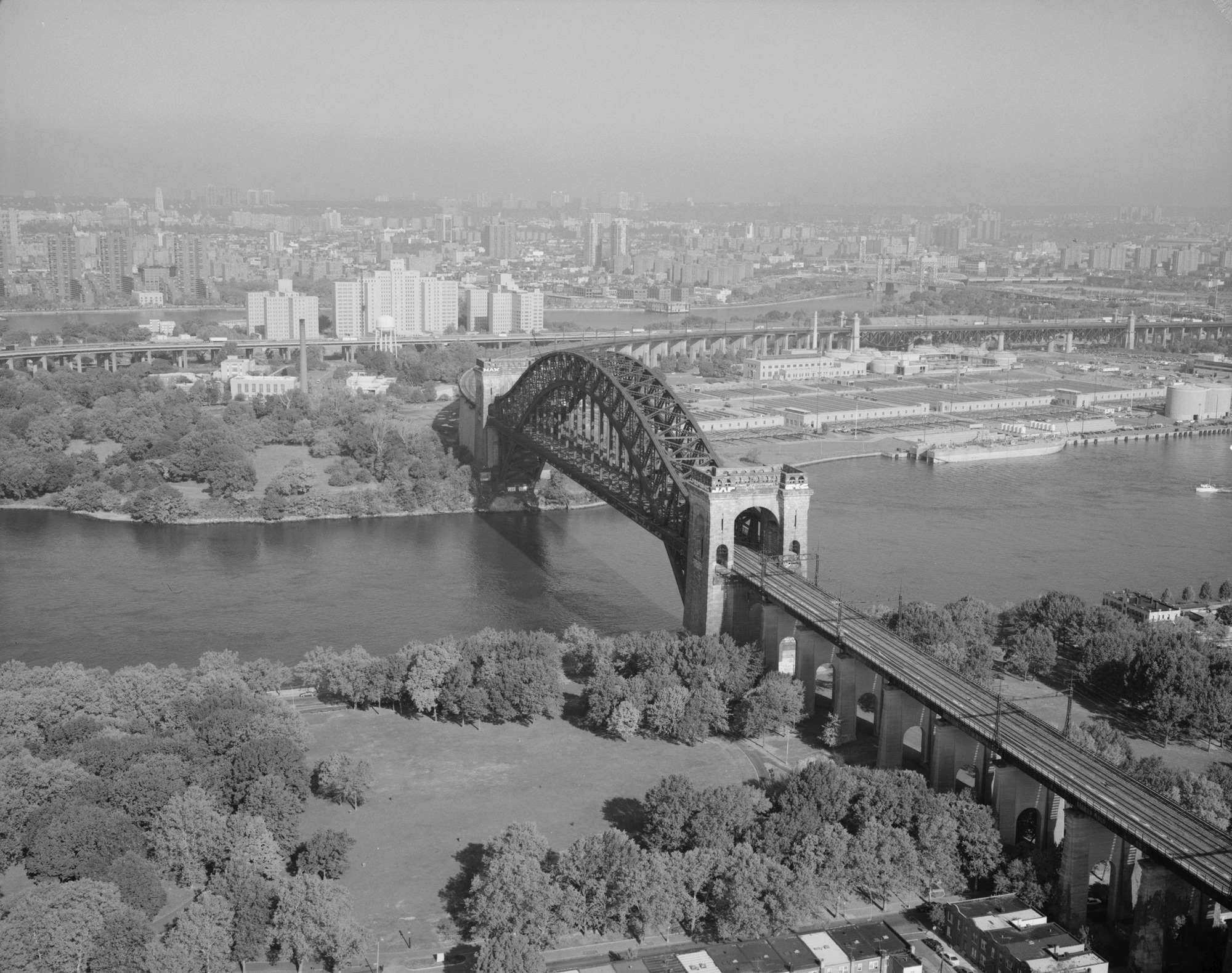 An aerial, black and white photo of Hell Gate Bridge looking north towards the Bronx in 1991. Jet Lowe photo.

While Lindenthal had originally hoped to build Hell Gate as a massive suspension bridge he was overruled with the railroad settling on a steel-arch span directly over the East River and Hell Gate, a bowstring truss design spanning the islands, a fixed truss crossing the Bronx Kills, and finally concrete-constructed viaducts along the rest of the structure.

The bridge would be wide enough to support a four-track main line and would top out, end-to-end, at an incredible 16,900 feet or 3.2 miles.  The most famous segment, that which is often photographed, is the segment spanning the East River (or the "East River Arch") which is 1,017 feet in length.  In addition,  the bridge is 135 feet in height.

Construction began in 1912, about two years after Pennsylvania Station had opened and President Cassatt had already passed away, never able to see either his incredible station or bridge completed.

Ironically, the Hell Gate Bridge would have never been built had it not been for Cassatt's vision of Pennsylvania Station.  Its was essentially the key link between the PRR and New Haven Railroad, offering travelers direct service from Boston into Manhattan. 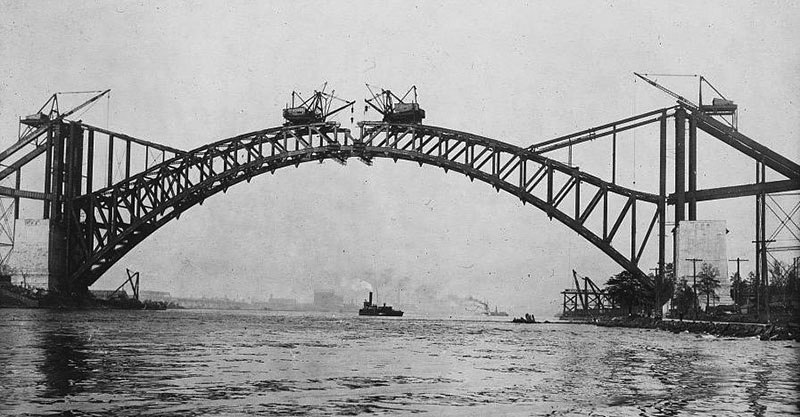 The celebrated and central piece of the bridge which spanned the East River used a "spandrel arch" design, similar to bridges which crossed the Rhine River in Germany, which was meant to convey power and strength. A key element in this look were the two massive stone masonry towers that rose well above the bridge's deck.

By September, 1916 the Hell Gate Bridge was all but complete and a year later the Pennsylvania Railroad dispatched the first through train connecting Boston with Washington, D.C. Today, the bridge remains an important artery for both freight and passenger trains although its track layout has been altered over the years.

Today, only three tracks remain with only two of those electrified as one is for freight traffic. The article gives a very detailed history and timeline of the bridge's construction along with its overall dimensions.