One of the most famous railroad landmarks east of the Mississippi River is the Western Maryland's Helmstetter's Curve located just west of Cumberland on the system's former Connellsville Subdivision.

As the company expanded westward in the early 20th century it had to find a relatively manageable gradient through the Allegheny Mountains which quickly rose once one was out of the Potomac River valley.

With newer engineering techniques, surveyors would ultimately plot a line that was somewhat easier than neighbor and competitor Baltimore & Ohio's Sand Patch grade. The curve became so well photographed over the years thanks to the generosity of the local family who owns the surrounding property and whose name is attached to it.

While sadly, much of the WM system has since been abandoned the curve today remains in regular use as part of the Western Maryland Scenic Railroad, not only giving visitors a chance to experience this magnificent location but also allowing photographers to continue to capture trains battling the climb. 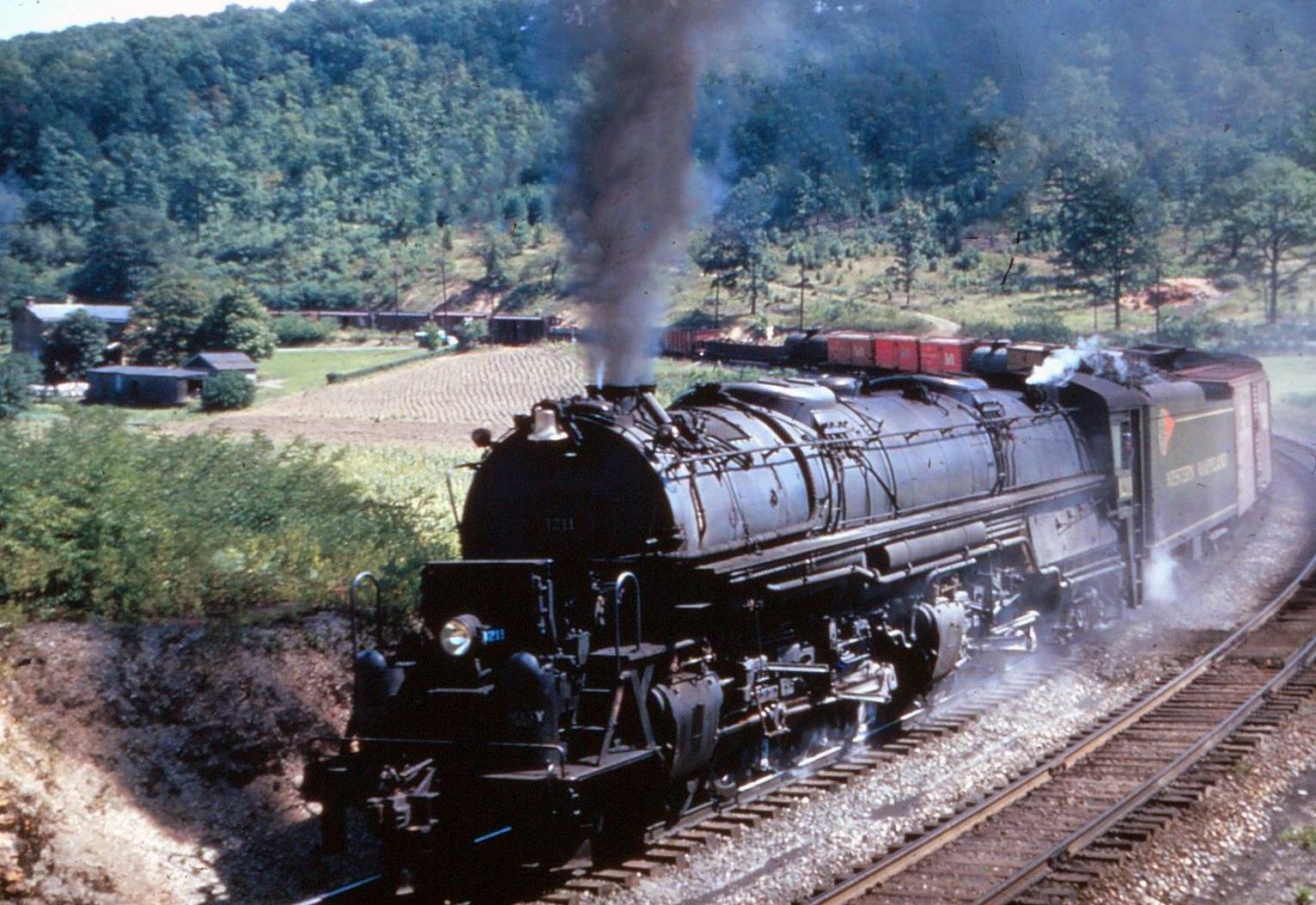 The history of the Western Maryland Railway can be traced back to the Baltimore, Carroll & Frederick Railroad of 1852 chartered that year by the Maryland General Assembly.

Construction continued southwestward as the WM gained control of the West Virginia Central & Pittsburg Railway by 1905 which gave it connections into the Mountain State's coal country as far as Elkins (a town that became a major southern division point for the railroad). 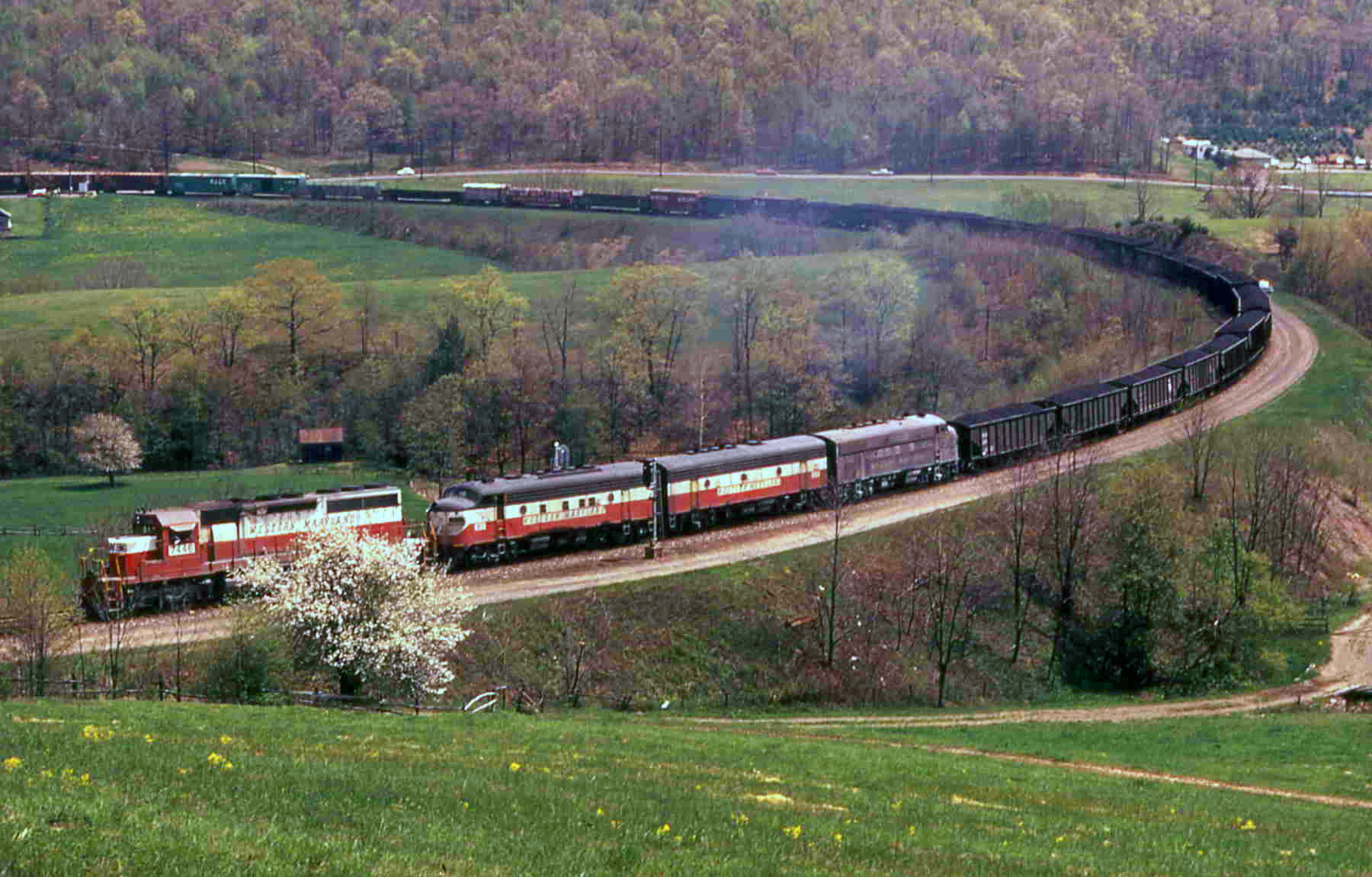 Taken during the late Western Maryland era, a westbound freight led by SD40 #7446 and three F7As rolls through the curve on May 11, 1975. This scene is significant as the last daylight westbound run over the Connellsville Extension. Paul Kutta photo.

The company also continued to sprawl through northern Maryland and southern Pennsylvania thanks to acquisitions like the Baltimore & Hanover Railroad, Gettysburg Railroad, and the Potomac Valley Rail Road.

Also in 1902 the WM was acquired by the Fuller Syndicate, led by Jay Gould's son George which was hoping to piece together his very own true transcontinental railroad from coast to coast. A year later the push to Cumberland began and was opened by 1906, giving the railroad another connection with the Baltimore & Ohio.

In 1907 the WM acquired the George's Creek & Cumberland Railroad which gave the company a route through the Cumberland Narrows as Gould hoped to push northwestward into Pennsylvania and establish a connection with his other interests, notably the Pittsburgh & West Virginia Railway which reached Connellsville. 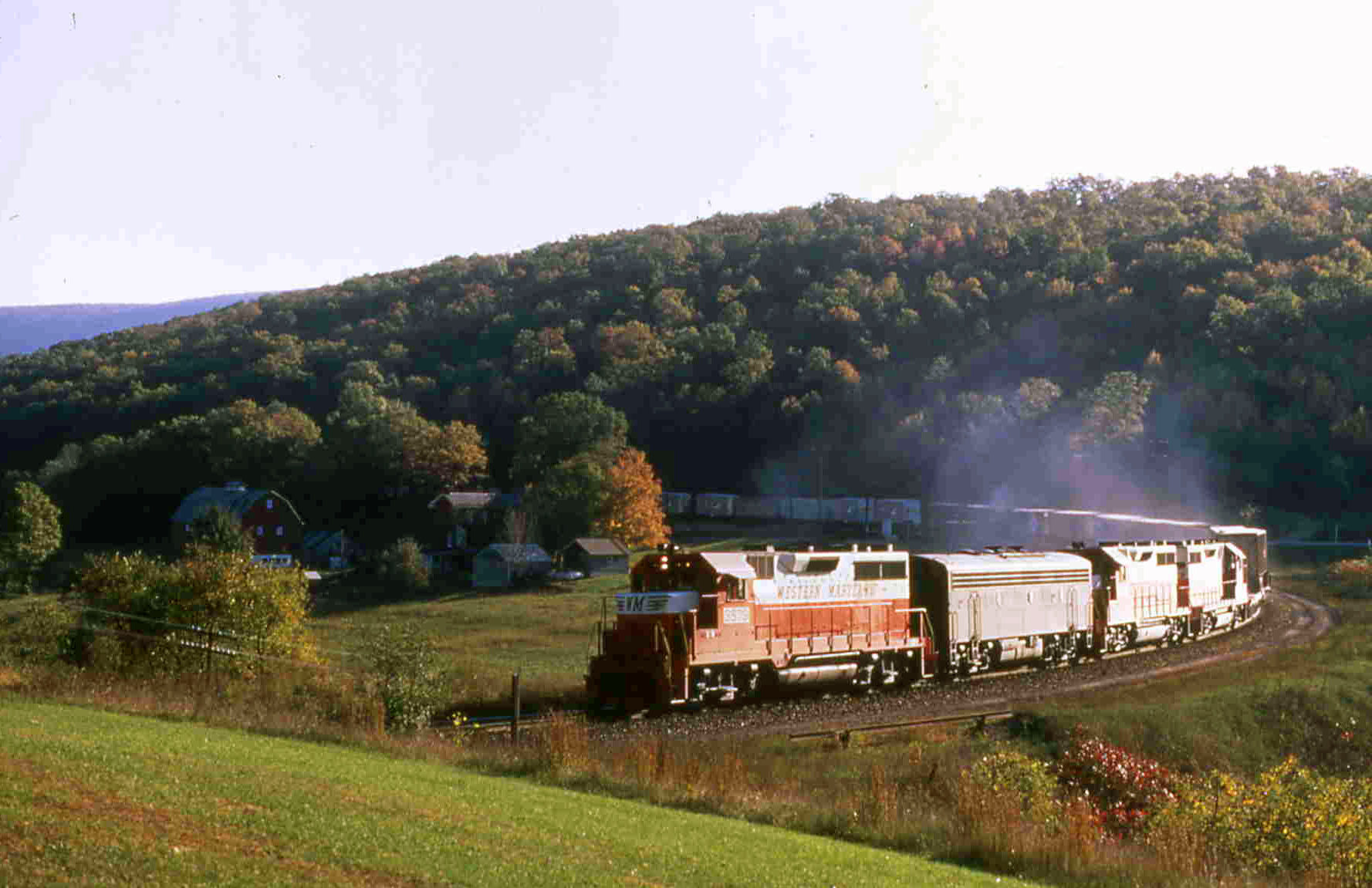 To reach Connellsville, however, required the railroad to mostly build its own line as there was not one already constructed. The closest was the B&O's main line to Pittsburgh, which naturally was not an option. In 1910 construction began.

About seven railroad miles west of Cumberland and just outside of the small town of Corrigansville, Maryland engineers had to figure out how to span the Cash Valley which lay in front of them. To reach the adjacent hillside they decided on a 180-degree horseshoe curve that would ultimately be about a half-mile in length.

The project also required purchasing a right-of-way from the Helmstetter family, which owned and operated a farm at the location. Thanks to their approval the railroad was allowed to build the engineering marvel which would come to define it, Helmstetter's Curve.

While the WM featured several incredibly scenic locations along its system, particularly the Thomas Subdivision, none compared to the location at Helmstetter's farm.

During the building of the curve engineers decided to span the Cash Valley with a serious of light, wooden bridges. The rails were placed atop these structures and then slowly back-filled with dirt. The highest points of the curve were actually several dozen feet above the valley floor.

Overall, the location featured a ruling grade of 1.5% and directly westward after clearing the curve trains encountered Brush Tunnel. From Cumberland the area was about 400 feet higher in elevation and while B&O's Sand Patch grade offered a somewhat lower grade, particularly from its westbound approach, the WM's main line was five miles shorter thanks in part to the curve. 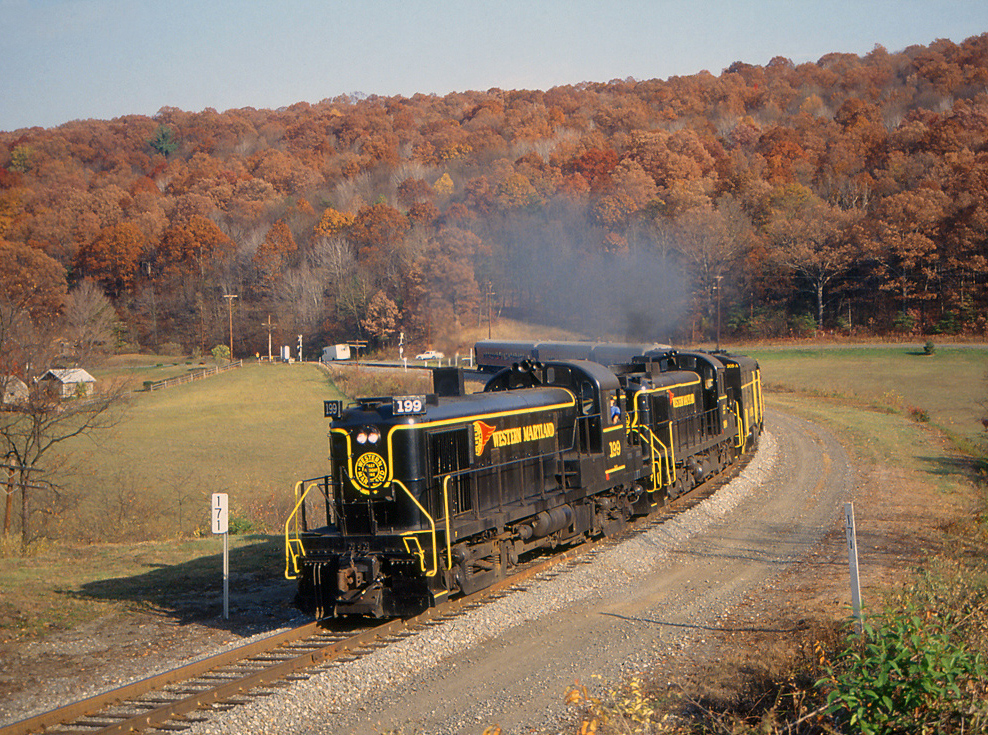 In a view that could certainly pass for the WM era, a trio of first-generation Alco road-switchers pull an excursion westbound through the curve along the Western Maryland Scenic Railroad at Corriganville, Maryland on October 26, 1991. Wade Massie photo.

Soon after the Connellsville Subdivision opened in 1912 the line was double-tracked to not only handle freight demand but also passenger trains.

During the final days of the curve's double-track operations one could be treated to a thunderous sight of large Class M-2 4-6-6-4 Challengers charging up the curve towards Connellsville with others sometimes cut in the middle and the rear of the train such as Class J-1 4-8-4 Northerns or I-2 2-10-0 Decapods.

Much of the WM's freight moved westward towards the connection with the P&WV so the company used fast trains like the WM-1 and Alpha Jets to get traffic quickly to its destination, and abruptly made quick turnarounds with eastbound empties to start the process all over again. 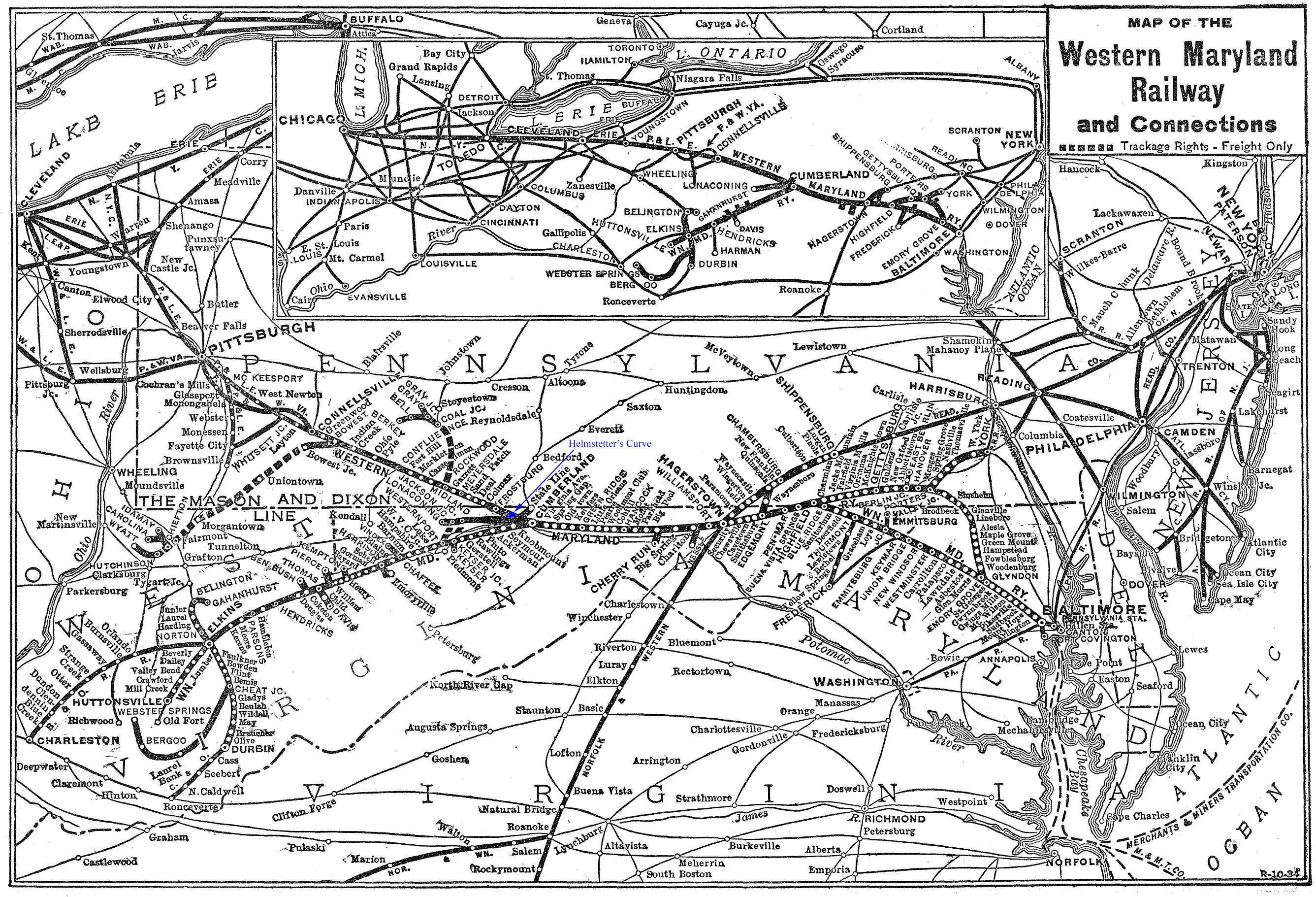 A map of Western Maryland's Helmstetter's Curve from a 1950 topographic map. Author's collection.

Photographers such as Bill Price and Bob Collins captured these types of scenes during the early 1950s just before the second track was removed a few years later as passenger services ended.  In its place, the Western Maryland installed centralized traffic control, CTC, with block signals between Cumberland and Deal (just east of Sand Patch).

After CSX Transportation was created in the 1980s much of the WM system was deemed superfluous in favor of the nearby B&O, including the line to Connellsville (sadly, Mother Nature sealed the fate of the Thomas Subdivision after severe flooding washed out that line in many locations through West Virginia).

Luckily, the section between Cumberland and Frostburg was saved by the Western Maryland Scenic Railroad when the state stepped in and purchased the property for tourism. Today, the WMSR is one of the most popular tourist trains in the country. 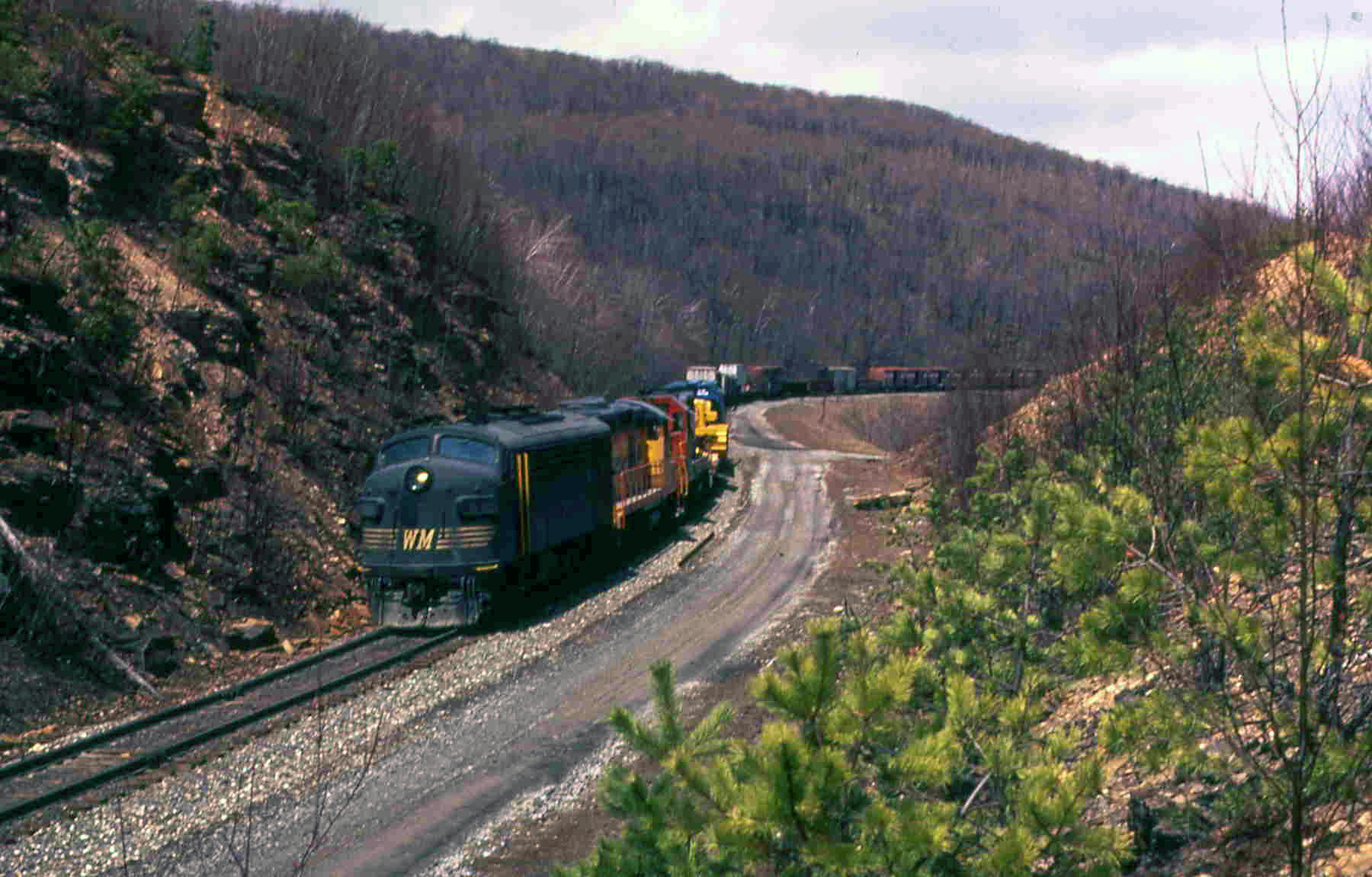 A Western Maryland freight led by an F7A and two Geeps (one in Chessie System livery and the other sporting the Circus scheme) near Helmstetter's some time during the 1970s.

For all of John Helmstetter's generosity over the years in allowing photographers to capture rail scenes on his property at the curve, unfortunately someone destroyed his iconic barn by arson in July, 2009, which had stood for more than 100 years.

Thanks to the efforts of railfans, the WMSR, and Steve Barry of Railfan & Railroad Magazine they formed the Helmstetter Farm Fund Committee to request donations in rebuilding his barn. It turned out to be quite the media sensation and resoundingly successful.

On November 12, 2009 with the help of several Amish men from Pennsylvania the barn was rebuilt in a single day. Due to all of this generosity, today, Mt. Helmstetter has a brand new barn and continues to allow photographers access to his property.