When Norfolk Southern announced its Heritage Program during March of 2012 it was the most far-reaching nod to railroad history ever put together by a major, Class I system up until that time.

When it was all said and done the NS heritage units totaled twenty locomotives sporting classic paint schemes of by-gone "fallen flags" from the classy Southern Railway to the ill-fated Penn Central.

Perhaps even more remarkable is that these liveries were not "inspired" by the companies that created them (such as the case with Union Pacific's similar but less expansive program) but true, authentic representations of actual schemes their locomotives wore back in the day from Reading's catchy "Bee Line Service" to Pennsylvania's regal Tuscan Red featuring the "Cat Whisker" gold pinstripes.

Today, the entire fleet faithfully moves freight all across the NS system and railfans have come to enjoy the chase of trying to photograph all twenty in service. 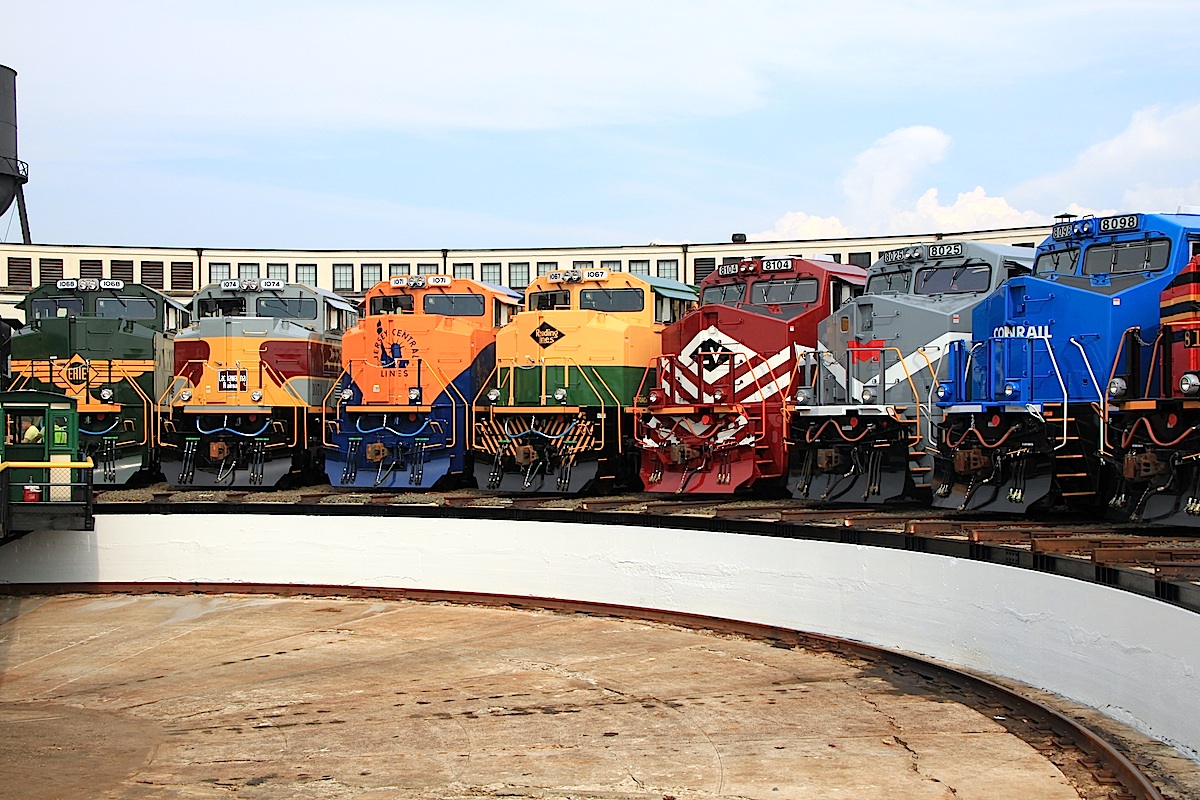 Seven of Norfolk Southern's heritage units are seen here around the turntable at the North Carolina Transportation Museum in Spencer during the July 4th holiday in 2012. Warren Calloway photo.

The renewed railroad heritage movement in this country (amongst the major railroads) began around 2005 when Union Pacific announced that summer it would unveil a small fleet of six heritage-inspired paint schemes (adorned on new SD70ACe locomotives) from companies that comprised its system.

UP, of course, had long been an advocate of industry preservation and for years operated its own heritage program including such pieces as never-retired 4-8-4 #844 (once #8444), 4-6-6-4 #3985, and its beautiful business train which mimicked the streamlined City fleet powered by sleek E9 diesels.

Norfolk Southern entered this arena, again, in 2007 when it unveiled its own business train powered by restored F series "covered wagons" that wore a gorgeous Southern-inspired freight livery.

Around the same time NS released its F units, Kansas City Southern readopted its "Southern Belle" livery and the railroad already rostered a small fleet of FP9s for its business train wearing the same paint scheme. 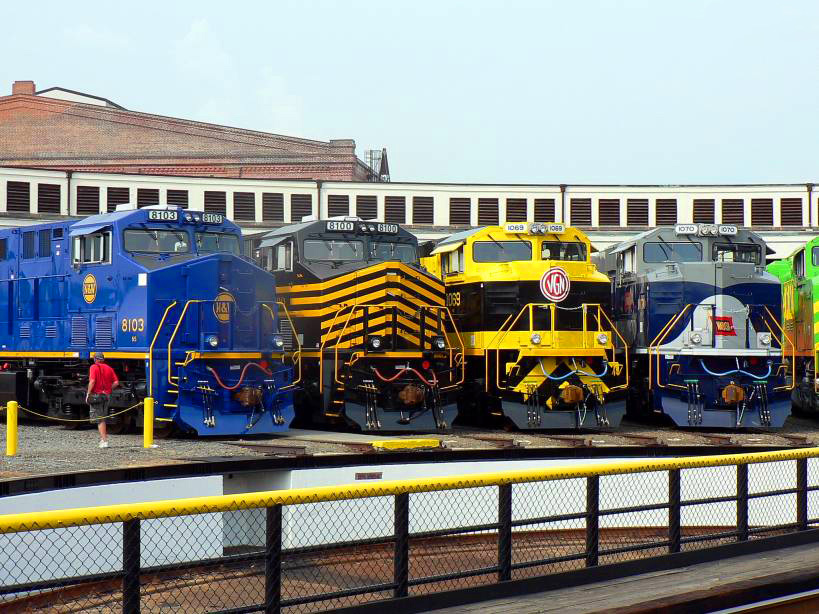 Interestingly enough, Norfolk Southern's Heritage Program began as simply an idea from noted railroad artist and railfan Andy Fletcher.  Over the years his artwork has become well-known depicting countless, detailed types of classic and present-day locomotive models, both steam and diesel, as well as freight and passenger cars.

During 2010 he accepted a position at the Virginia Museum of Transportation as their artist-in-residence after attending "Train Lover’s Day" that year.

During his time at VMT Andy met Norfolk Southern's CEO, Wick Moorman (the man who has made all of this possible, from the restored F units to the steam and heritage programs), and a year later with drawings included, pitched him the idea of painting a series locomotives in fallen flag paint schemes representative of the company's history.

Mr. Moorman liked the concept and during 2012 gave the project's official approval.  With the wheels in motion several individuals and NS employees worked hard to see it through. 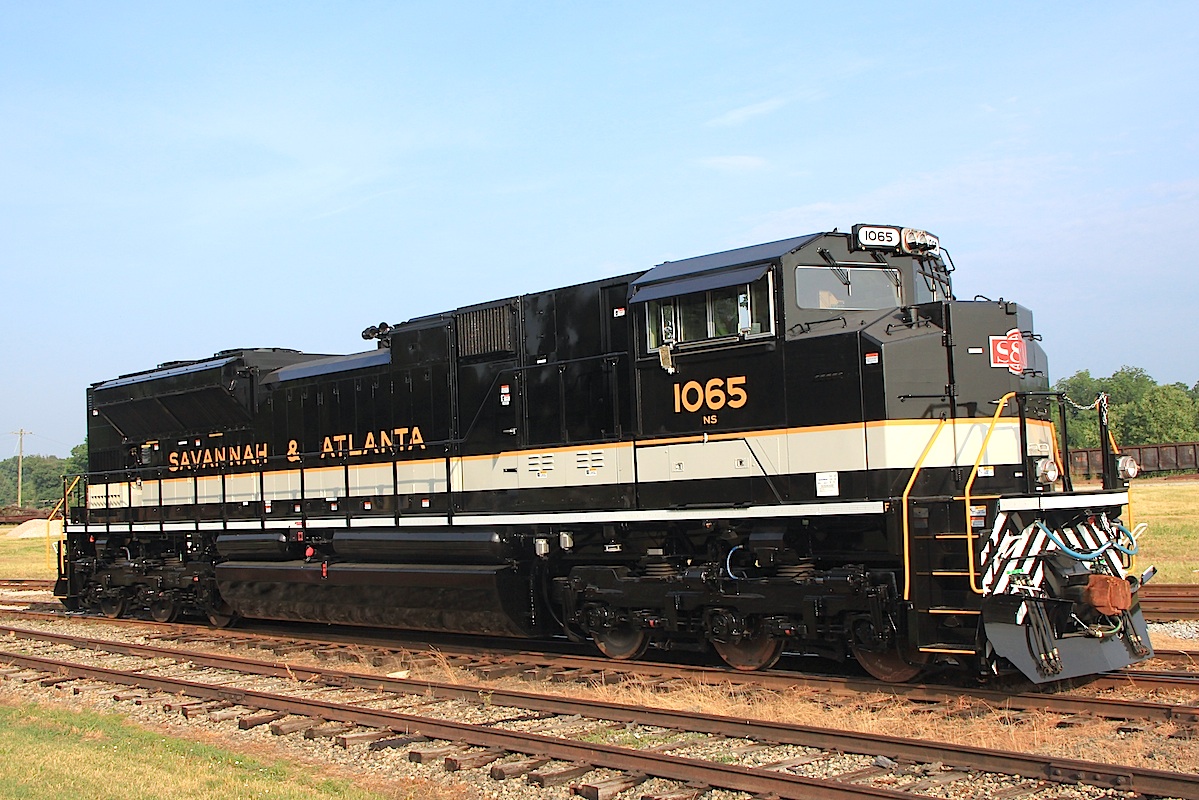 Savannah & Atlanta Railway #1065. The S&A, located in Georgia, was a long-time subsidiary of the Central of Georgia since 1951, which itself was later acquired by the Southern. Warren Calloway photo. 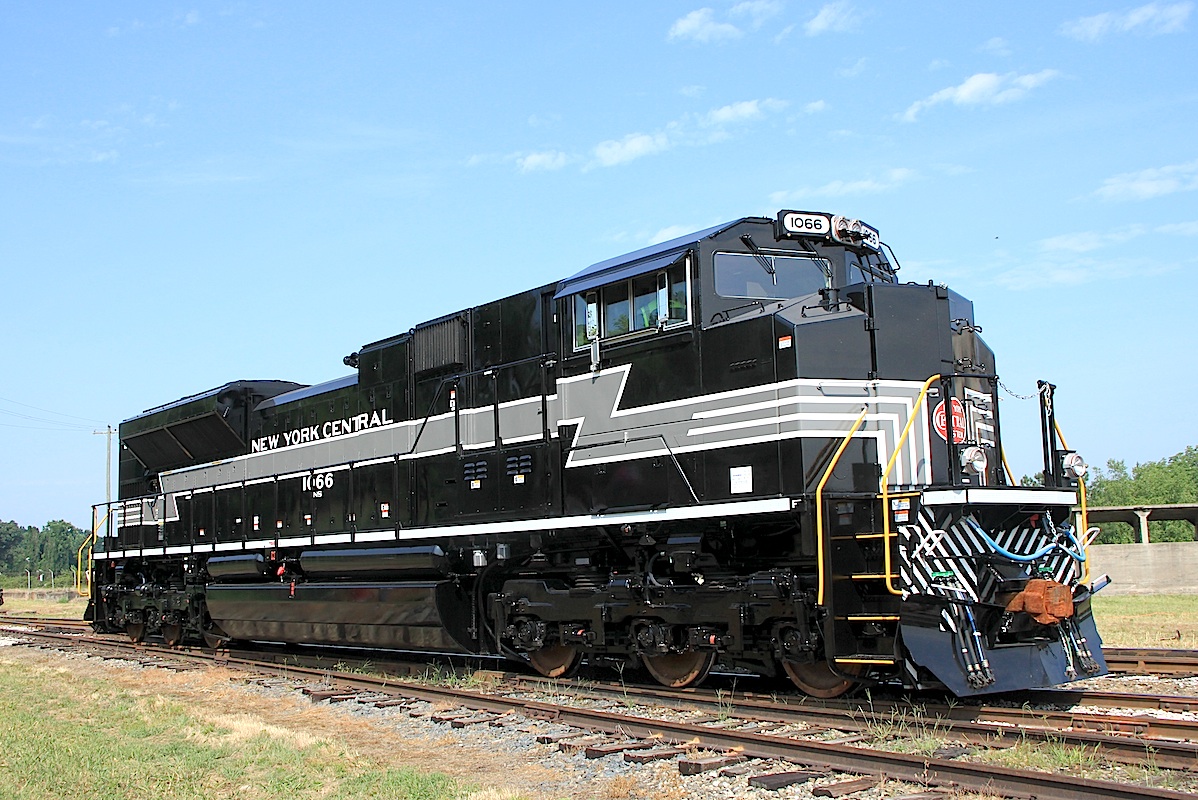 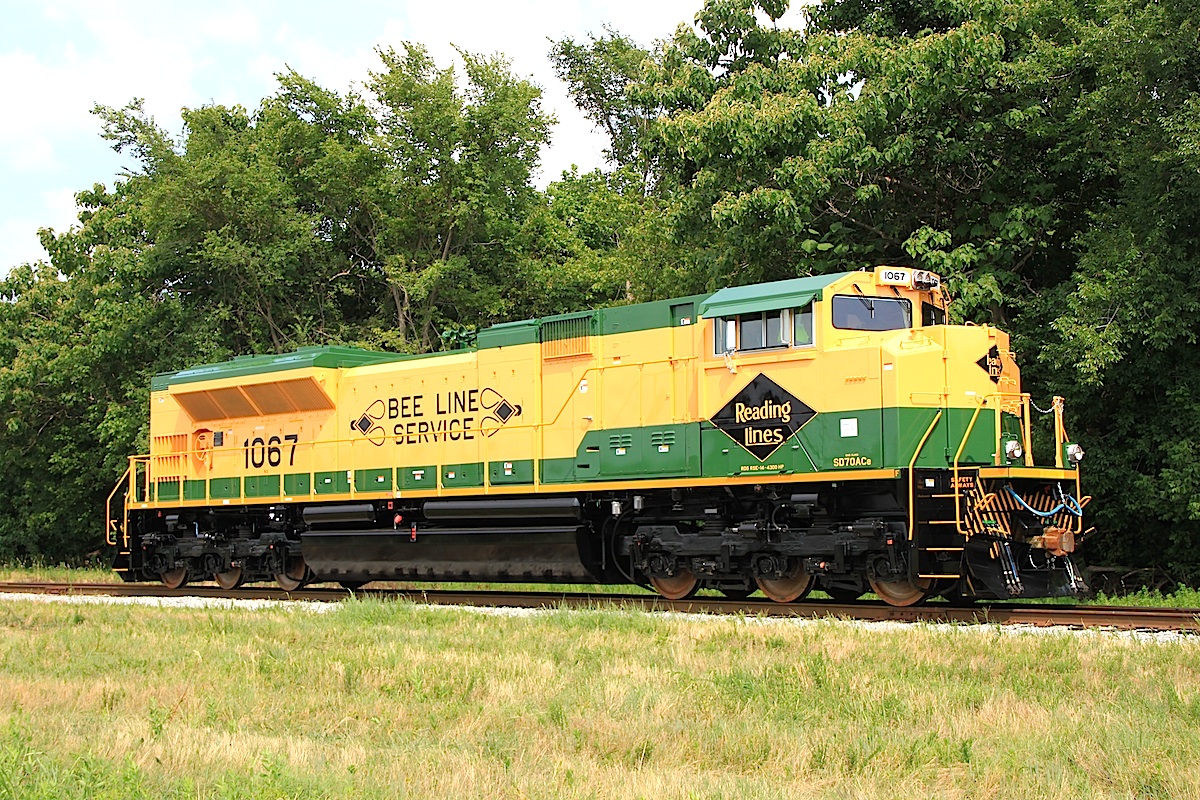 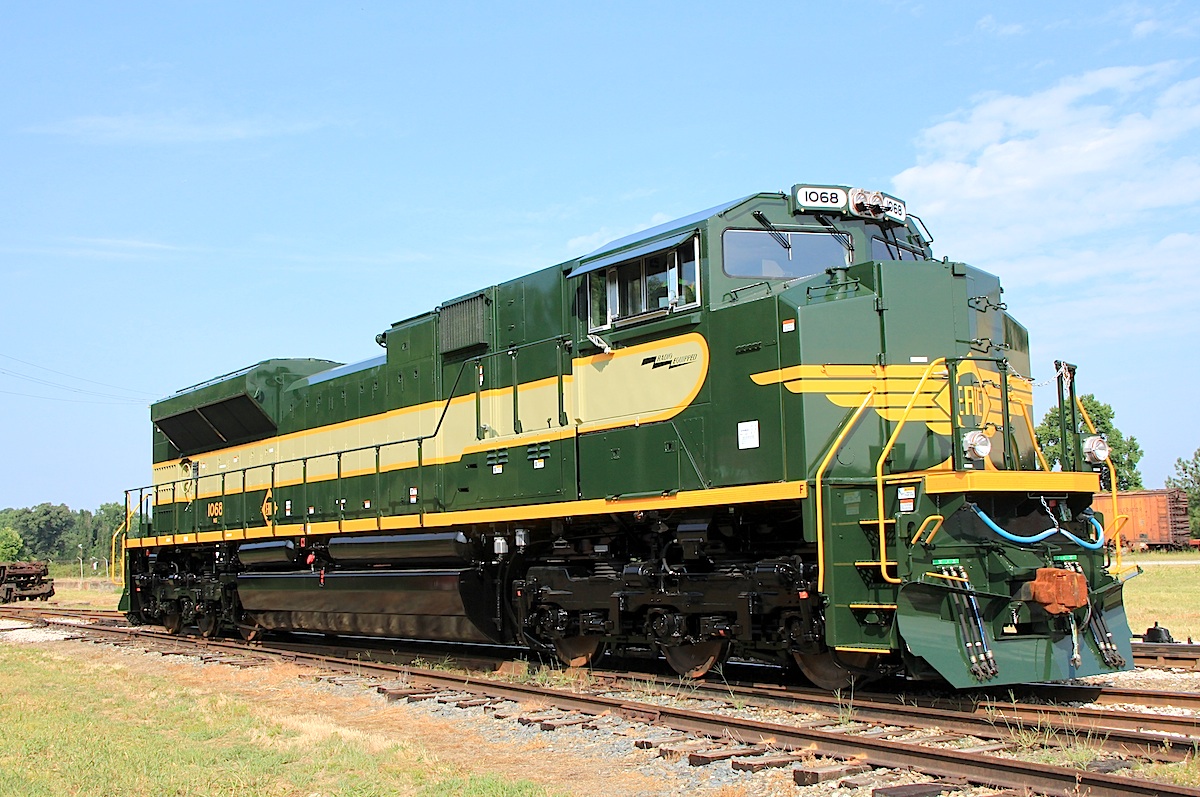 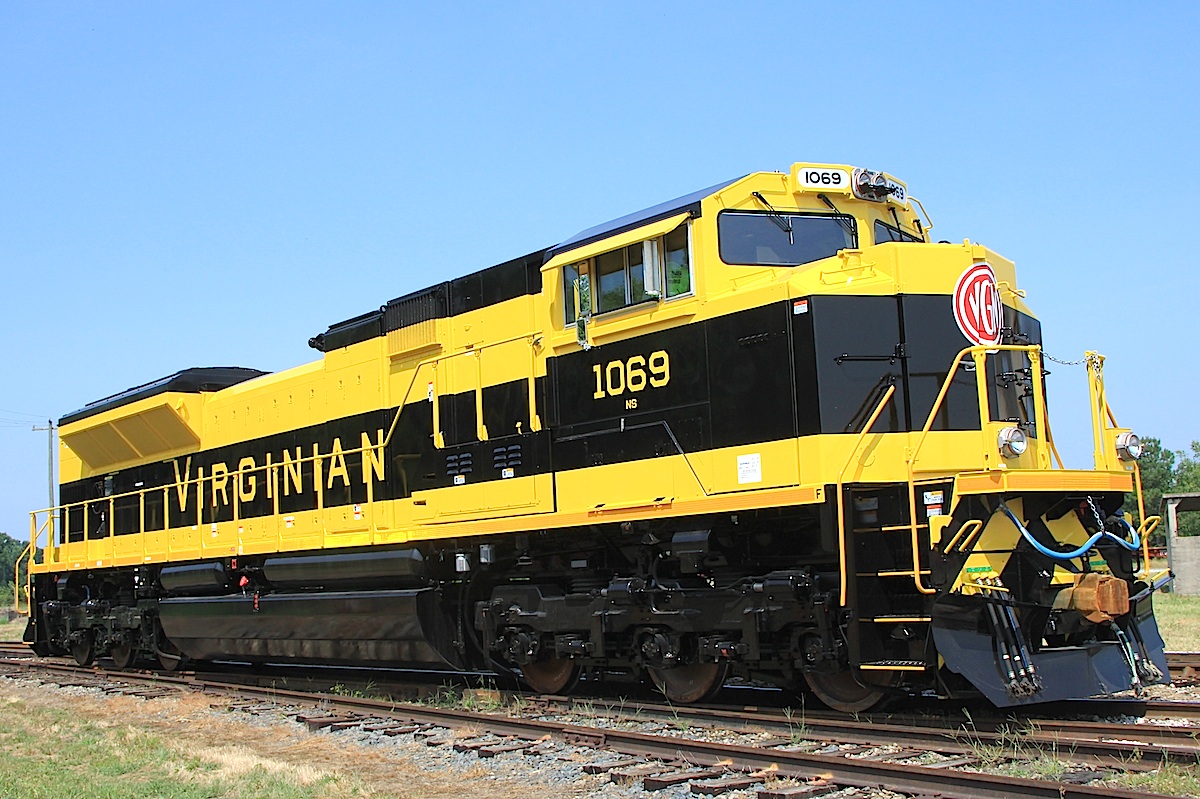 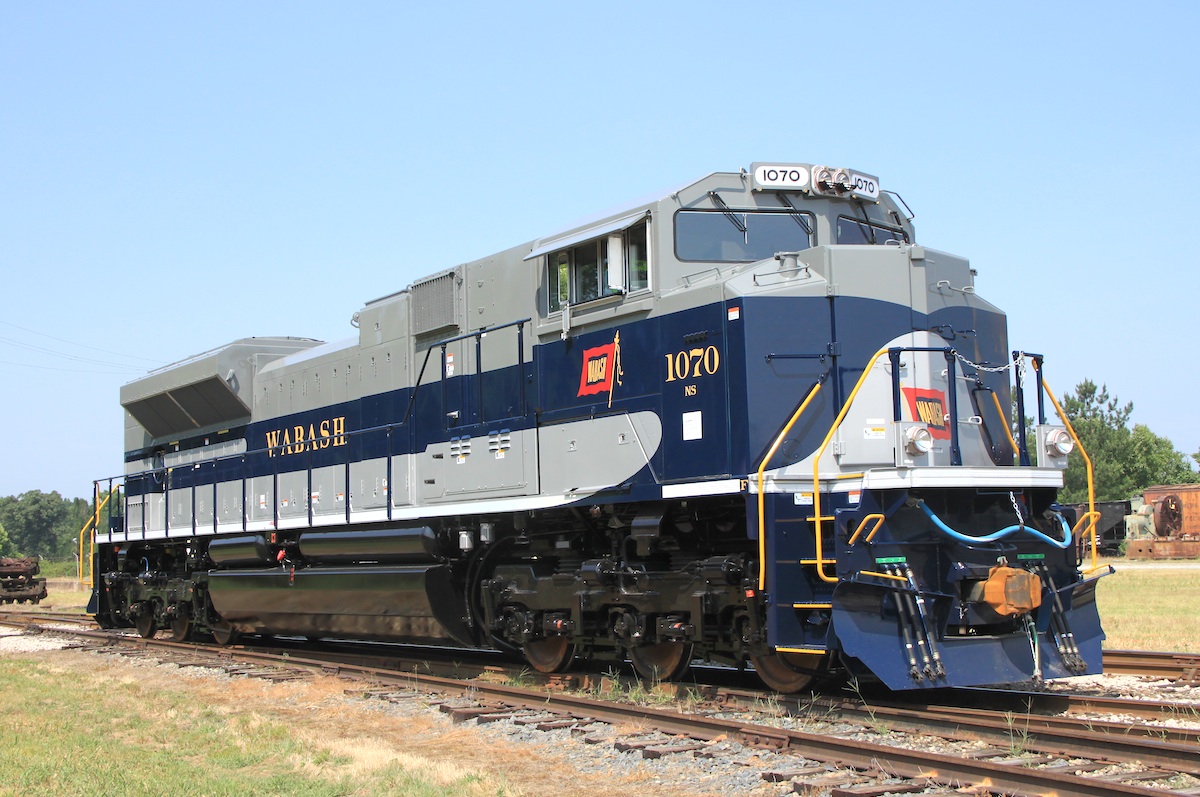 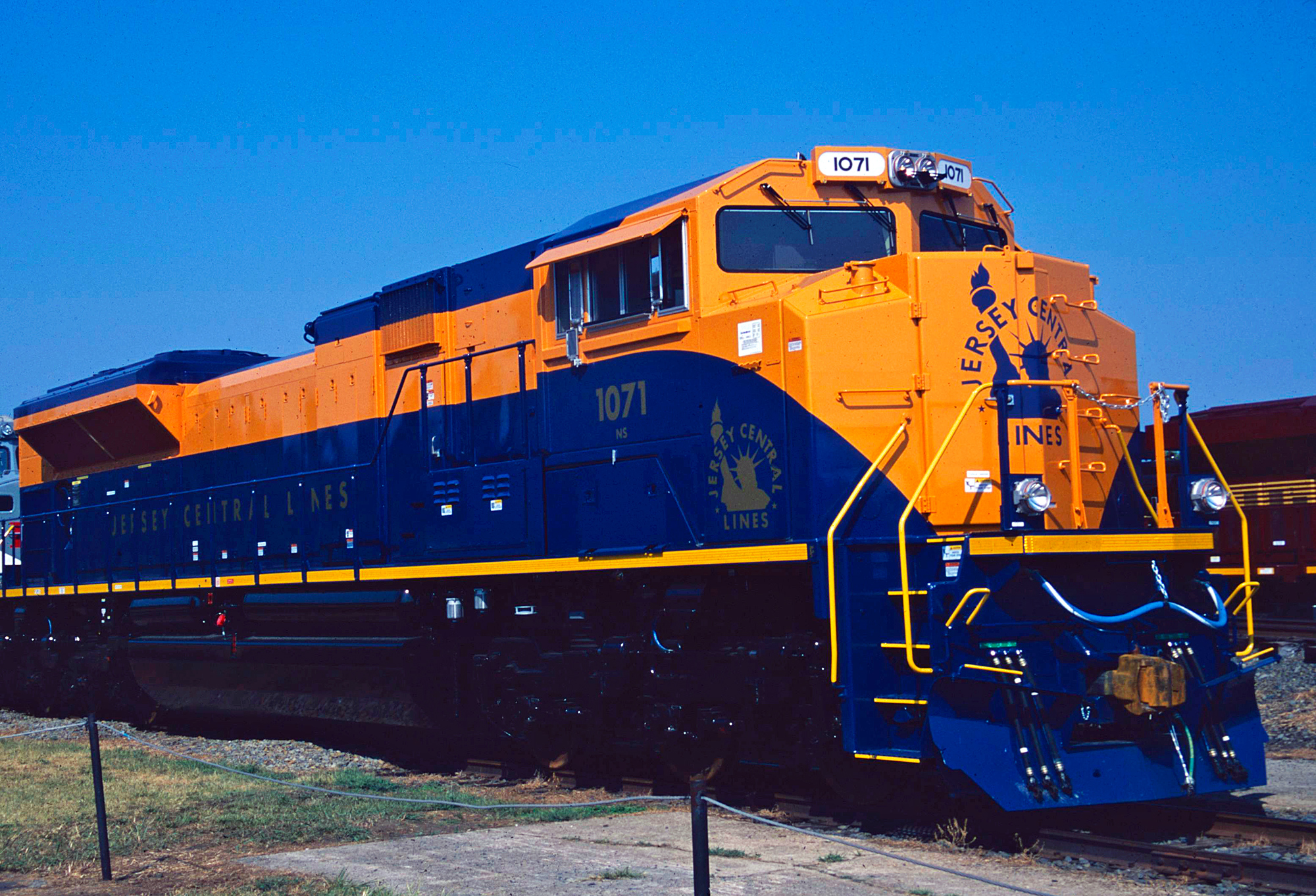 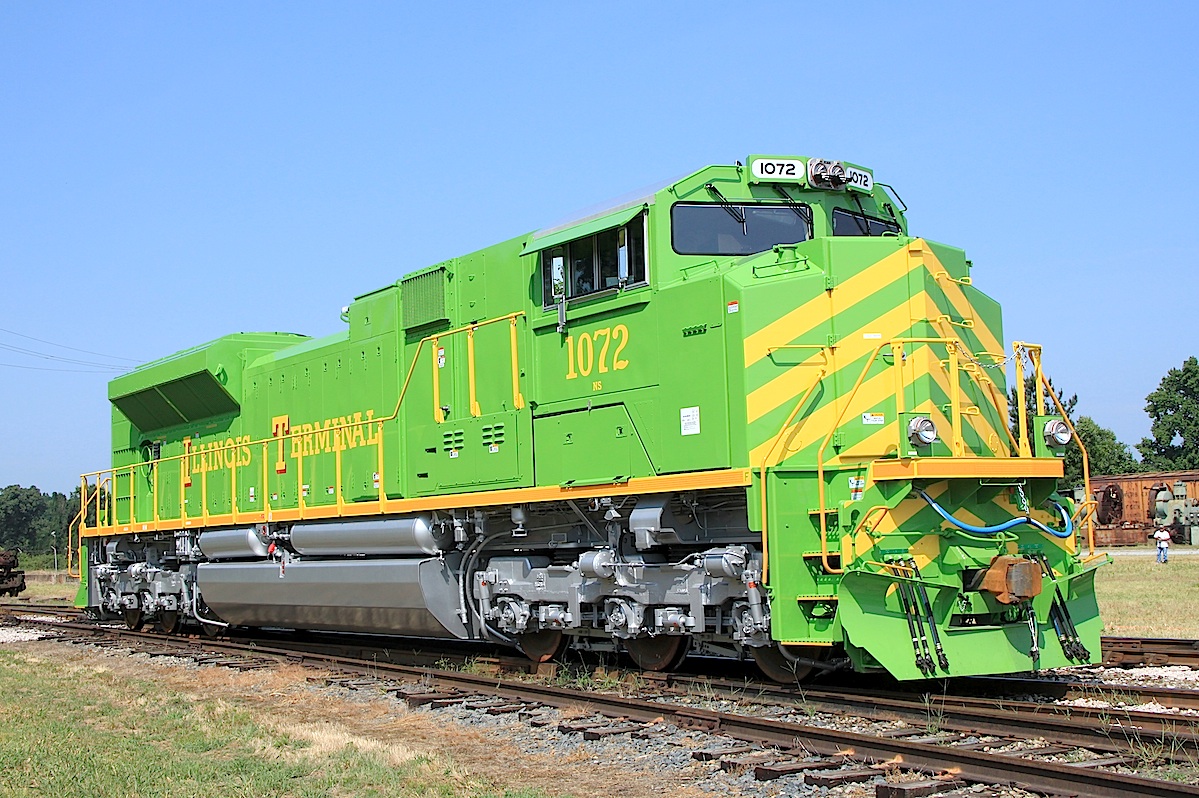 Norfolk Southern's Illinois Terminal heritage unit, #1072. This system was a long-time interurban that transitioned into a successful freight line before it was acquired by the Norfolk & Western in 1982. Warren Calloway photo. 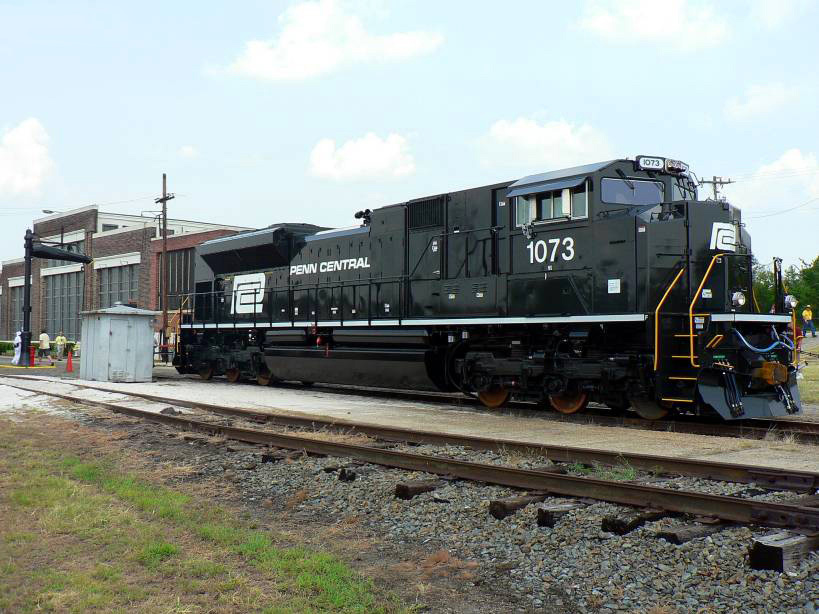 Norfolk Southern's Penn Central heritage unit, #1073. If the paint appears smoky that's because it is actually a deep, "Brunswick Green" (a long-time shade used by the PRR) and not a true black. Dan Robie photo. 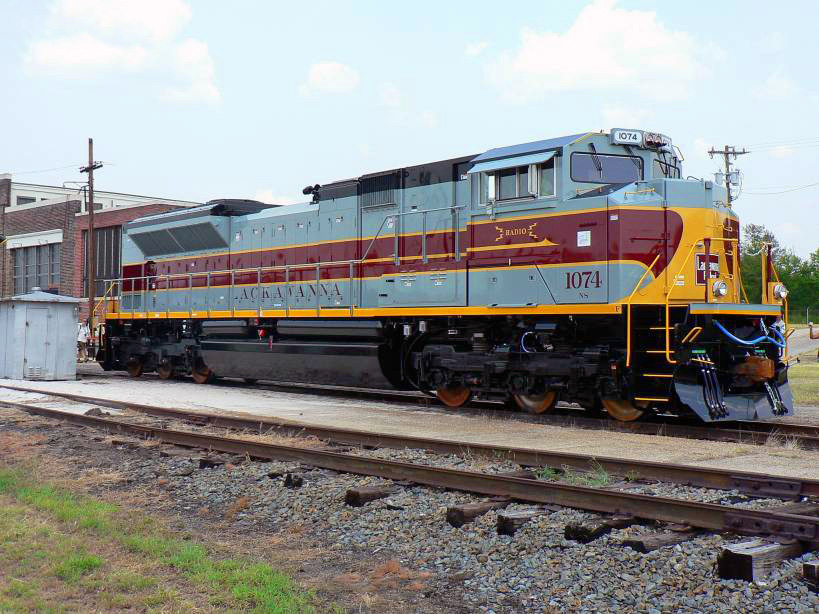 In the January, 2013 issue of Trains Magazine noted journalist Don Phillips, who has spent decades reporting on the industry, wrote a piece concerning the Heritage Program entitled "The Past Creeps Forward To Surprise Us."

In the article he mentions those folks and organizations who deserve particular credit for its success; names like Ron Flanary, a railroad historian/writer from Virginia who has captured the industry on film since the 1960s.

He provided NS with much of the information needed to paint the Interstate Railroad livery (the so-called "Orange-Cicle").

There was also Mark Duve, NS mechanical engineer-locomotive design and Allen Rider, manager of locomotive engineering who oversaw the actual painting of the locomotives.

Finally, mention goes to the railroad's shop forces in Chattanooga, Tennessee and Altoona, Pennsylvania who actually completed the painting work as well as Progressive Rail (parent of Electro-Motive Diesel), which pitched in to help. 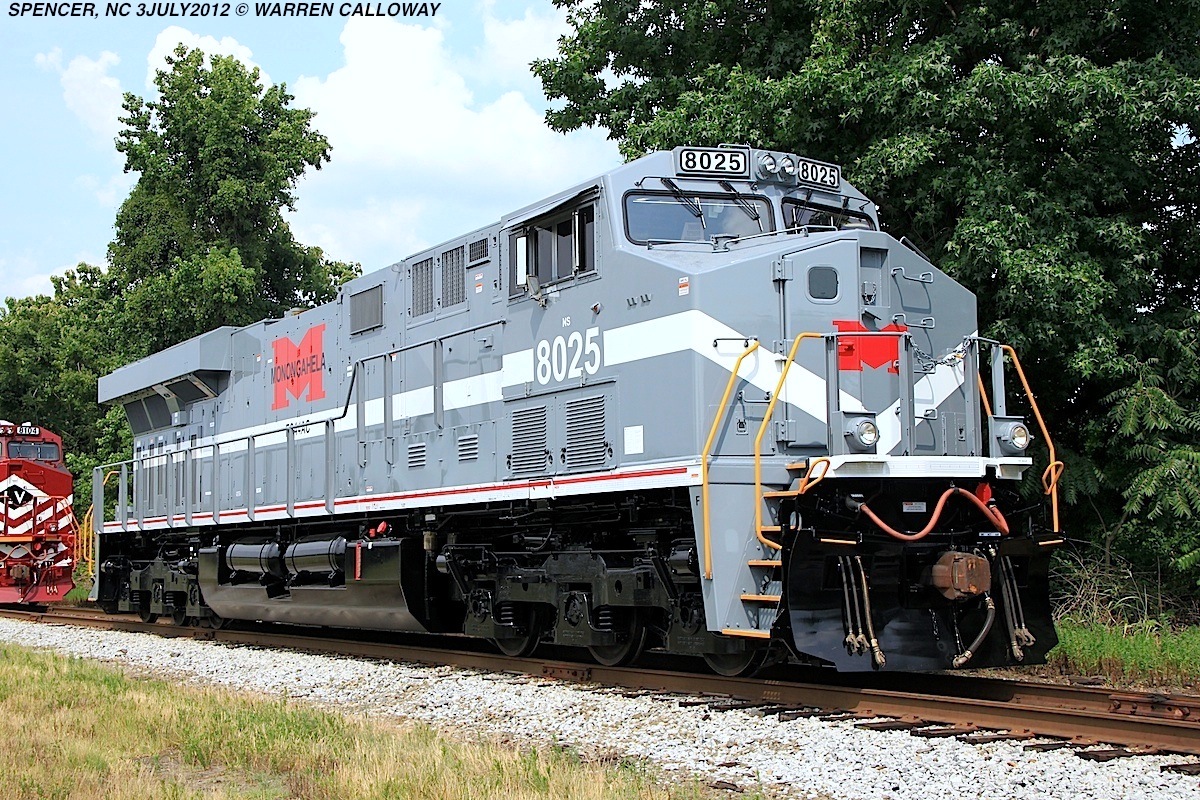 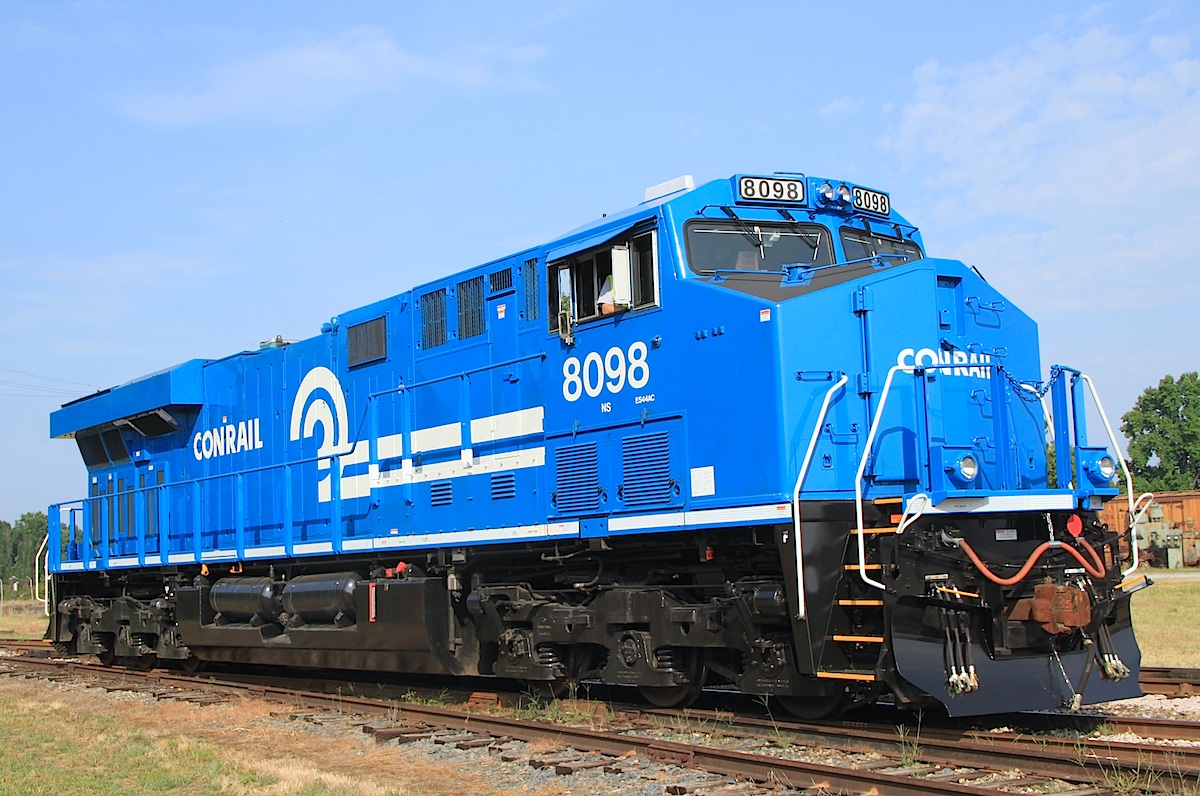 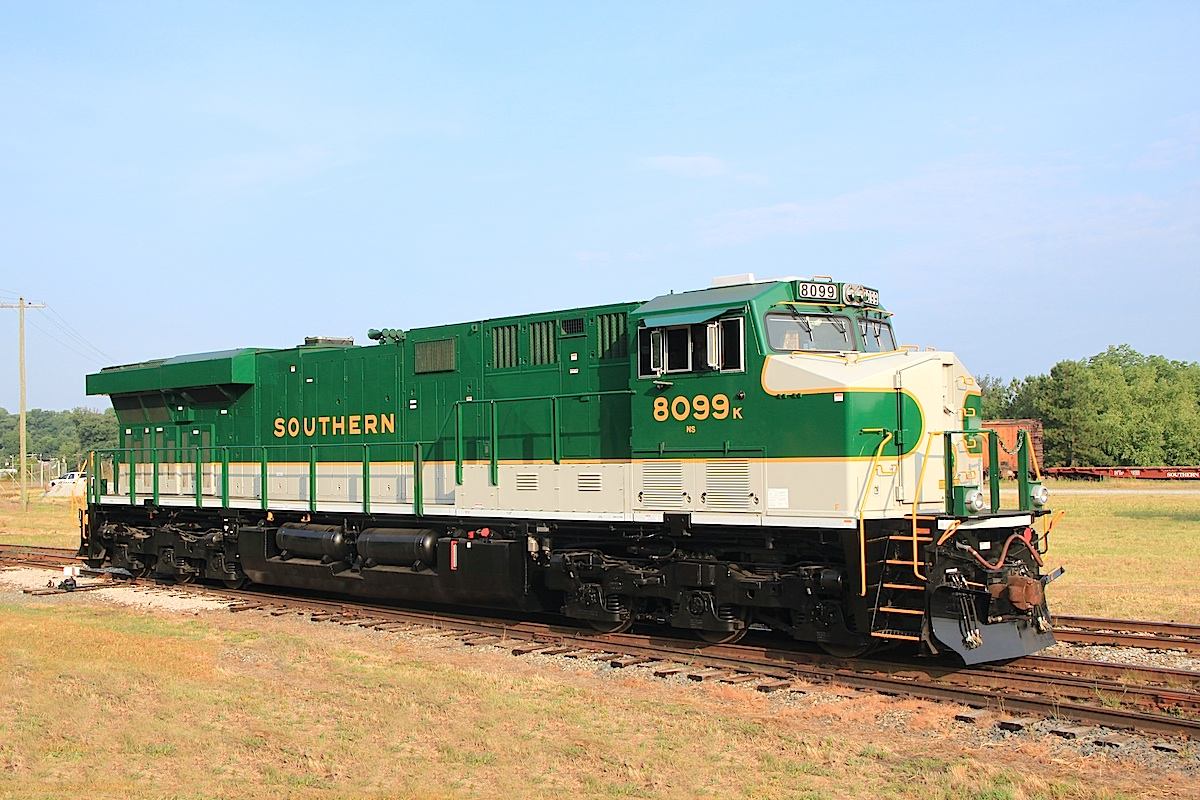 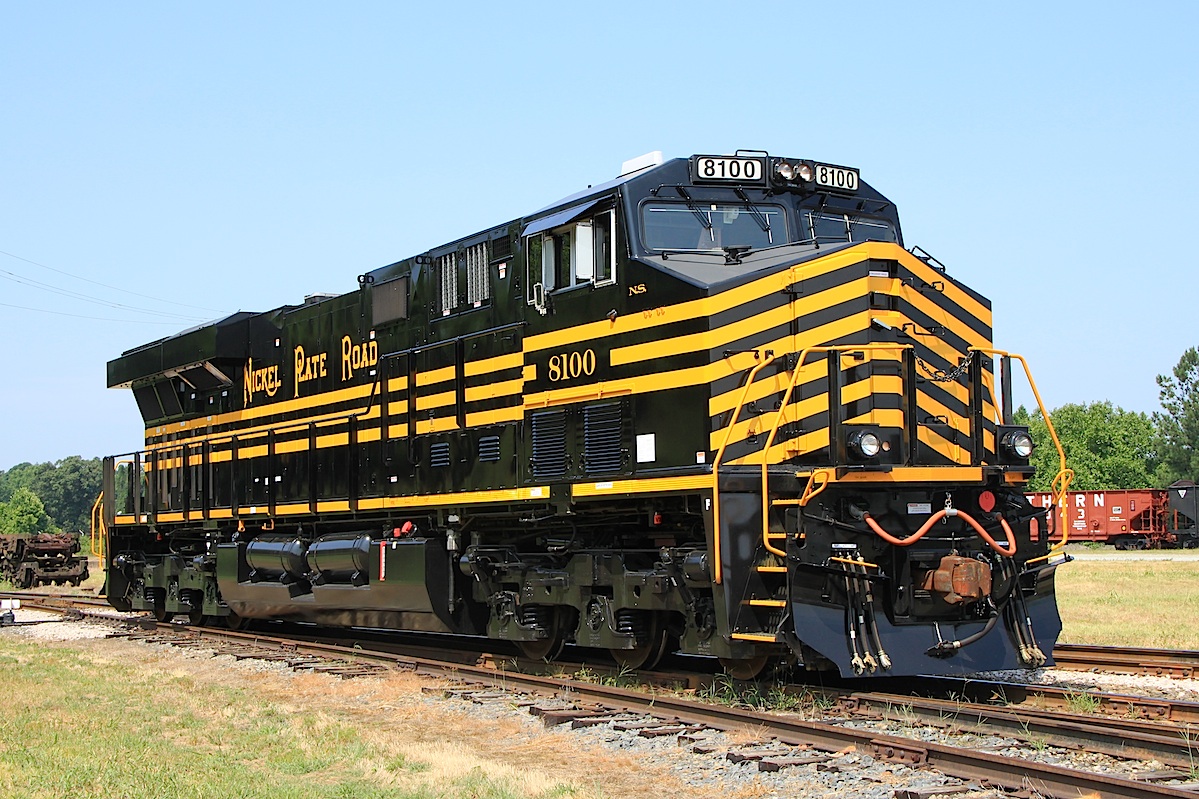 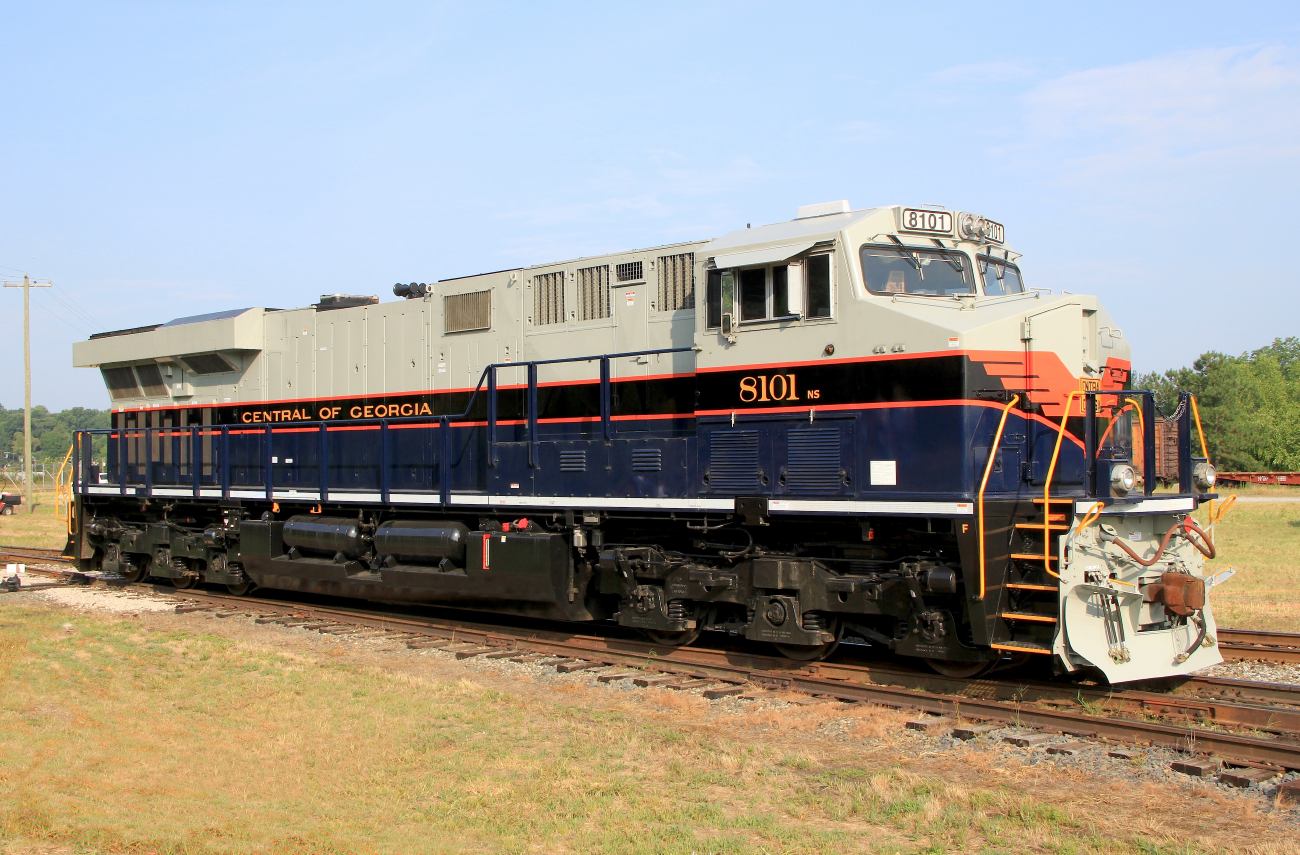 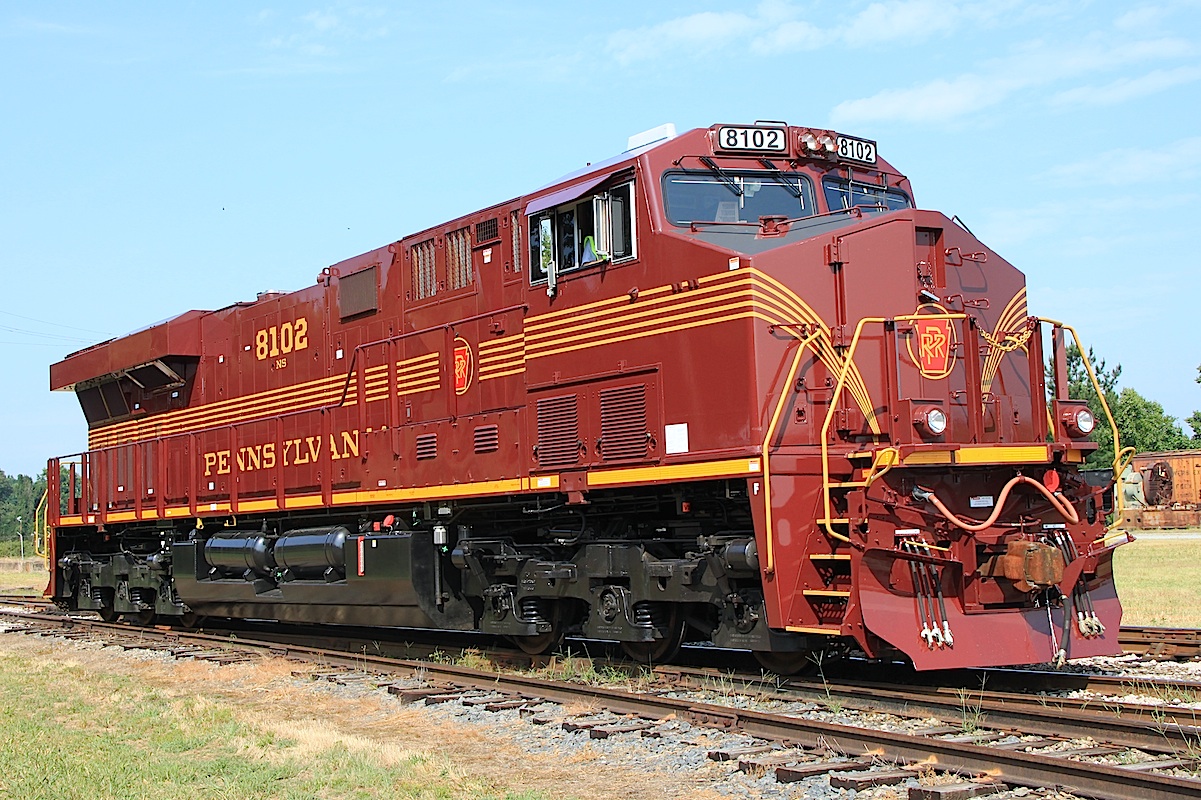 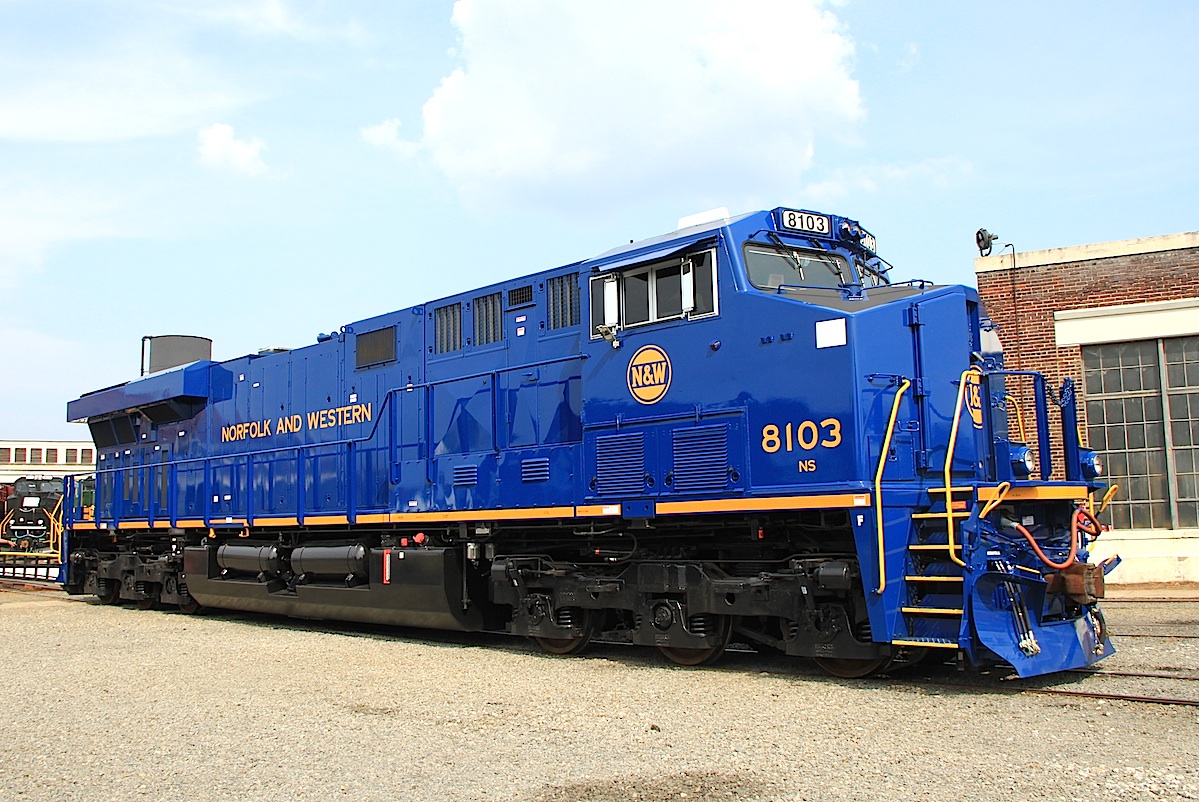 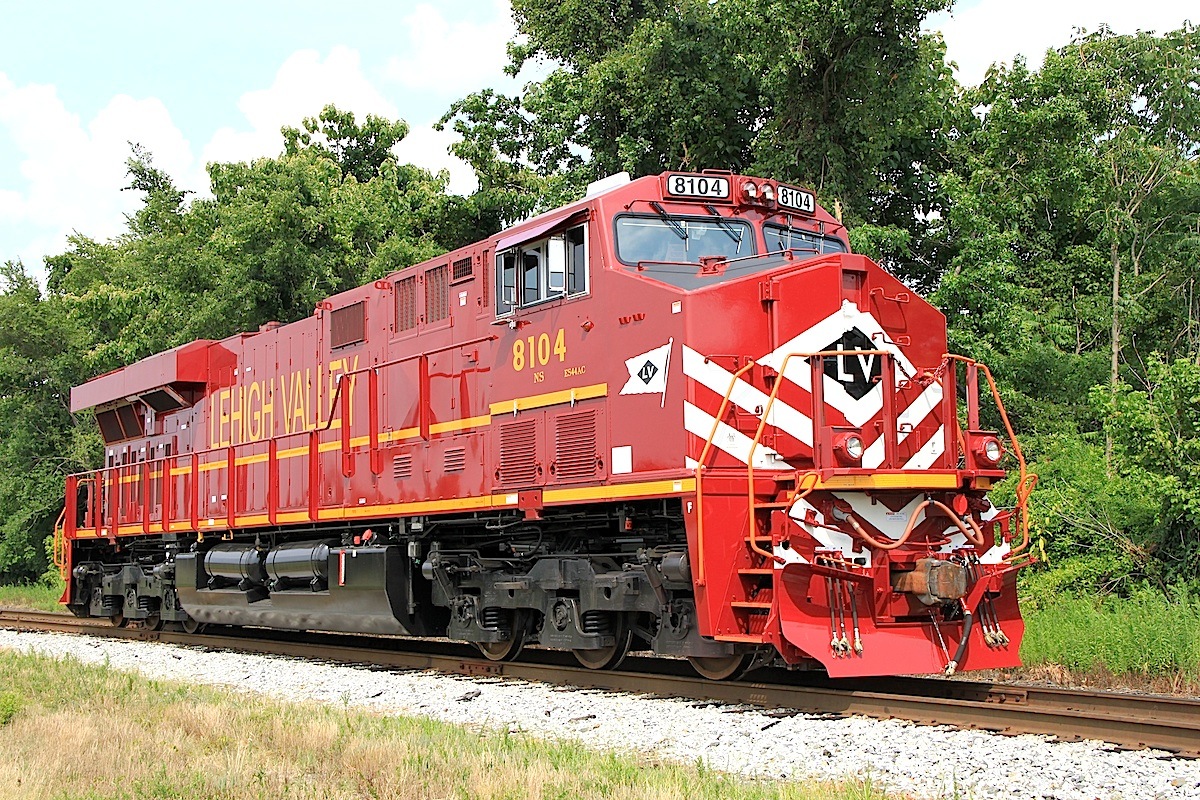 Norfolk Southern's Lehigh Valley heritage unit, #8104. The locomotive had its nose refinished prior to the celebration festivities in Spencer. Warren Calloway photo. 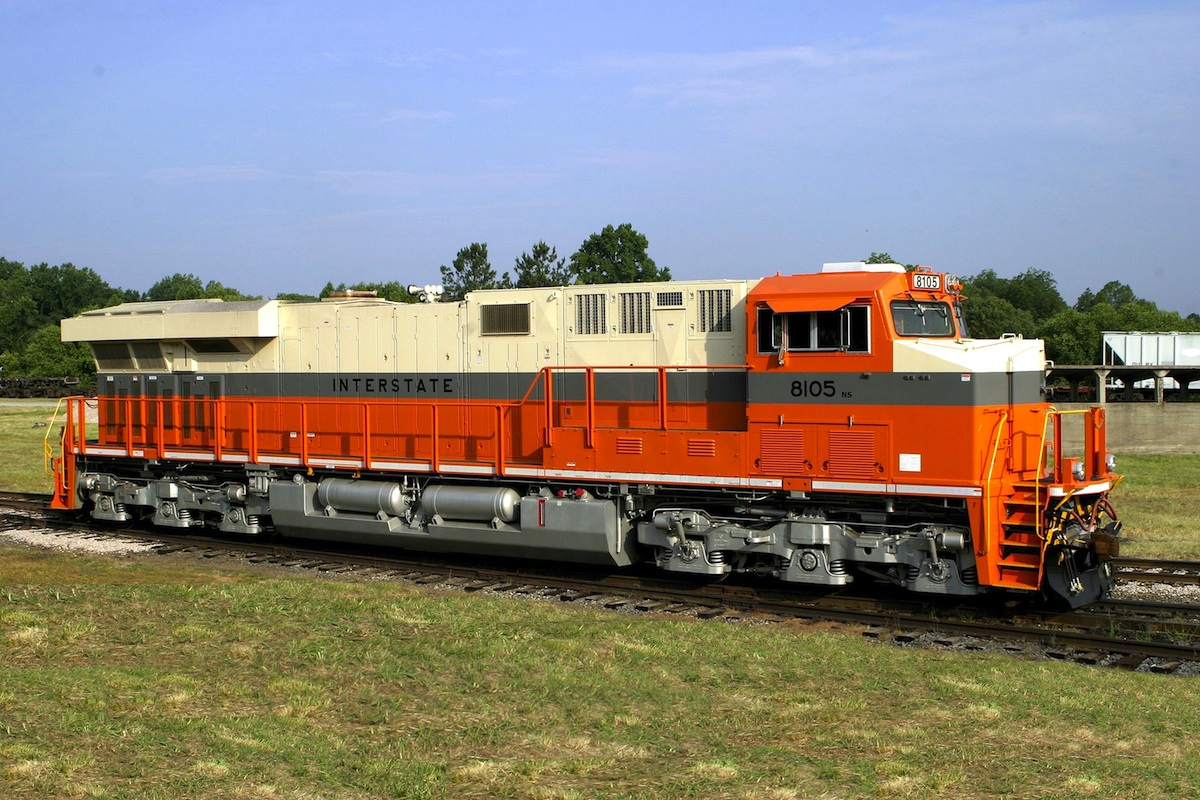 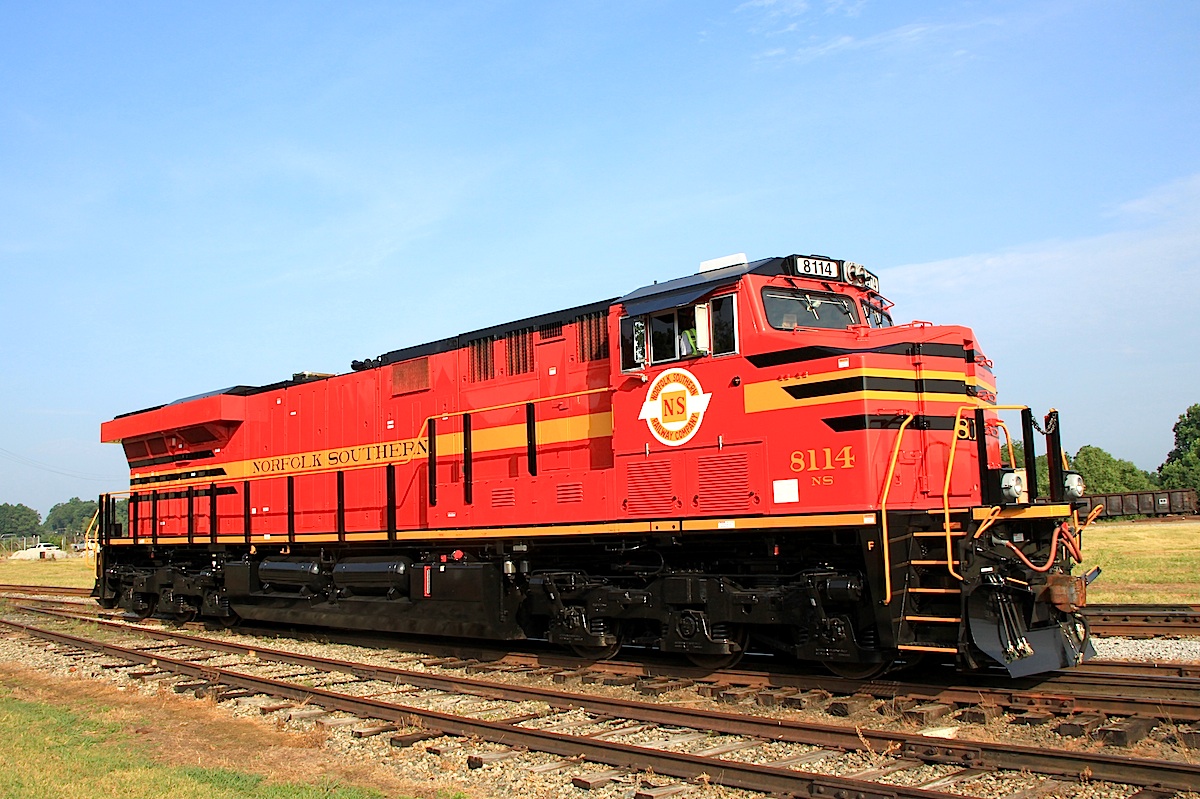 In addition to the original heritage fleet which debuted in 2012 Norfolk Southern has also released a secondary fleet of refurbished locomotives wearing fallen flag liveries and other rebuilds honoring breast cancer awareness and first responders. 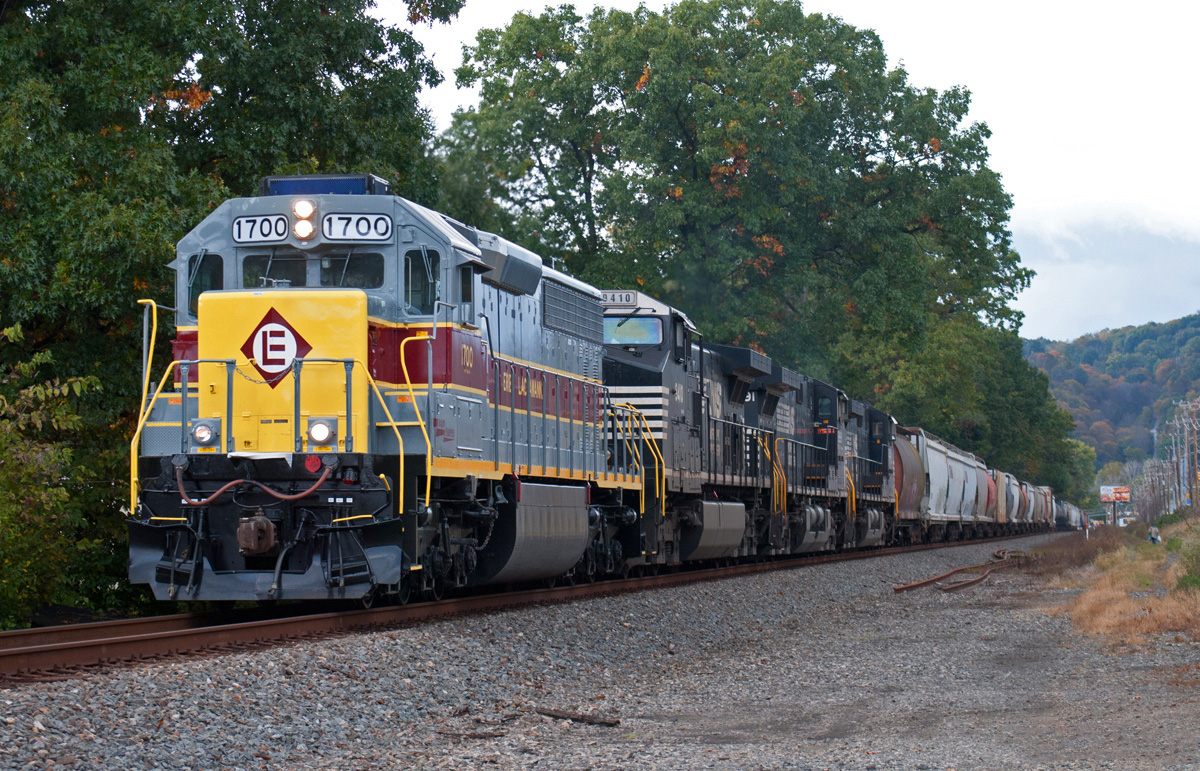 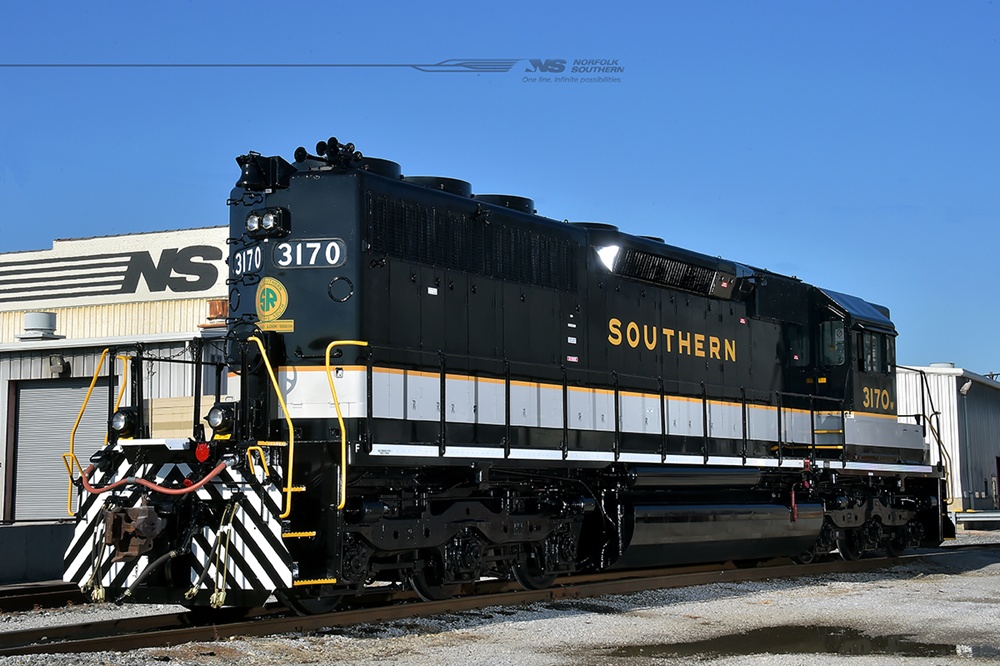 In February of 2015 unveiled SD40 #3170 at its Chattanooga, Tennessee wearing its original Southern "Tuxedo" livery. It was built by Electro-Motive in 1971 wearing the same number. Photo courtesy Norfolk Southern 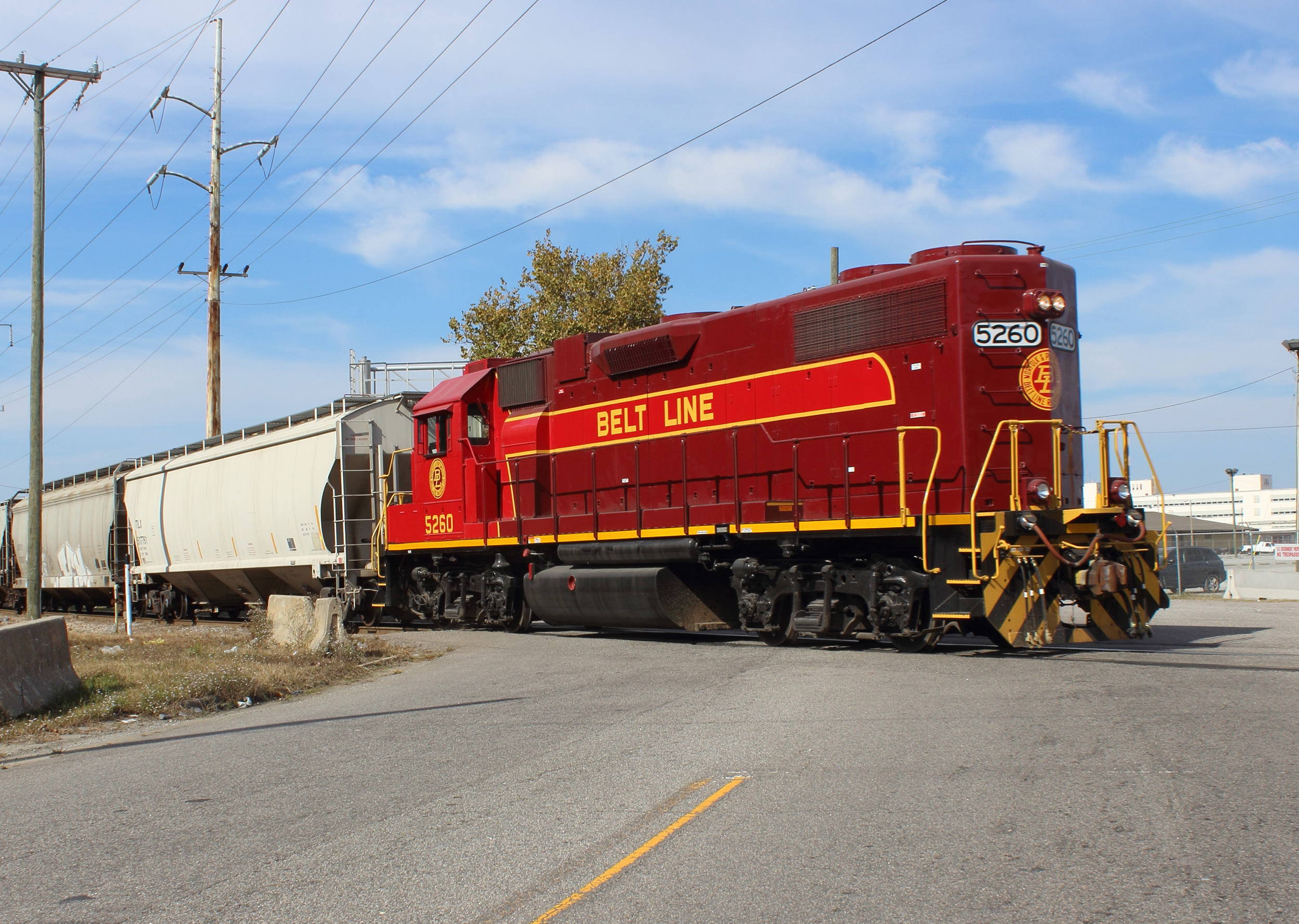 Norfolk Southern further outdid itself when it staged a celebration of the fleet at the North Carolina Transportation Museum in Spencer, featuring all 20 locomotives lined up around the ground's turntable and roundhouse (the facility and shops had once been a terminal of the Southern Railway) during the July 4th holiday.  This event saw more than 4,000 folks attend and was a logistics headache for the railroad (not only to get the locomotives there but also completed in time!) but in the end turned out to be a great success.  As Mr. Phillips noted in his article the lure of the fleet transcended far beyond what Union Pacific had done, along with any other railroad for that matter.  Through painstaking work and precision NS gave the public authentic liveries as they might appear today on locomotives if those companies were still in operation.   The end result was something that not only attracted railfans but also retired and active railroaders as well as the general public. 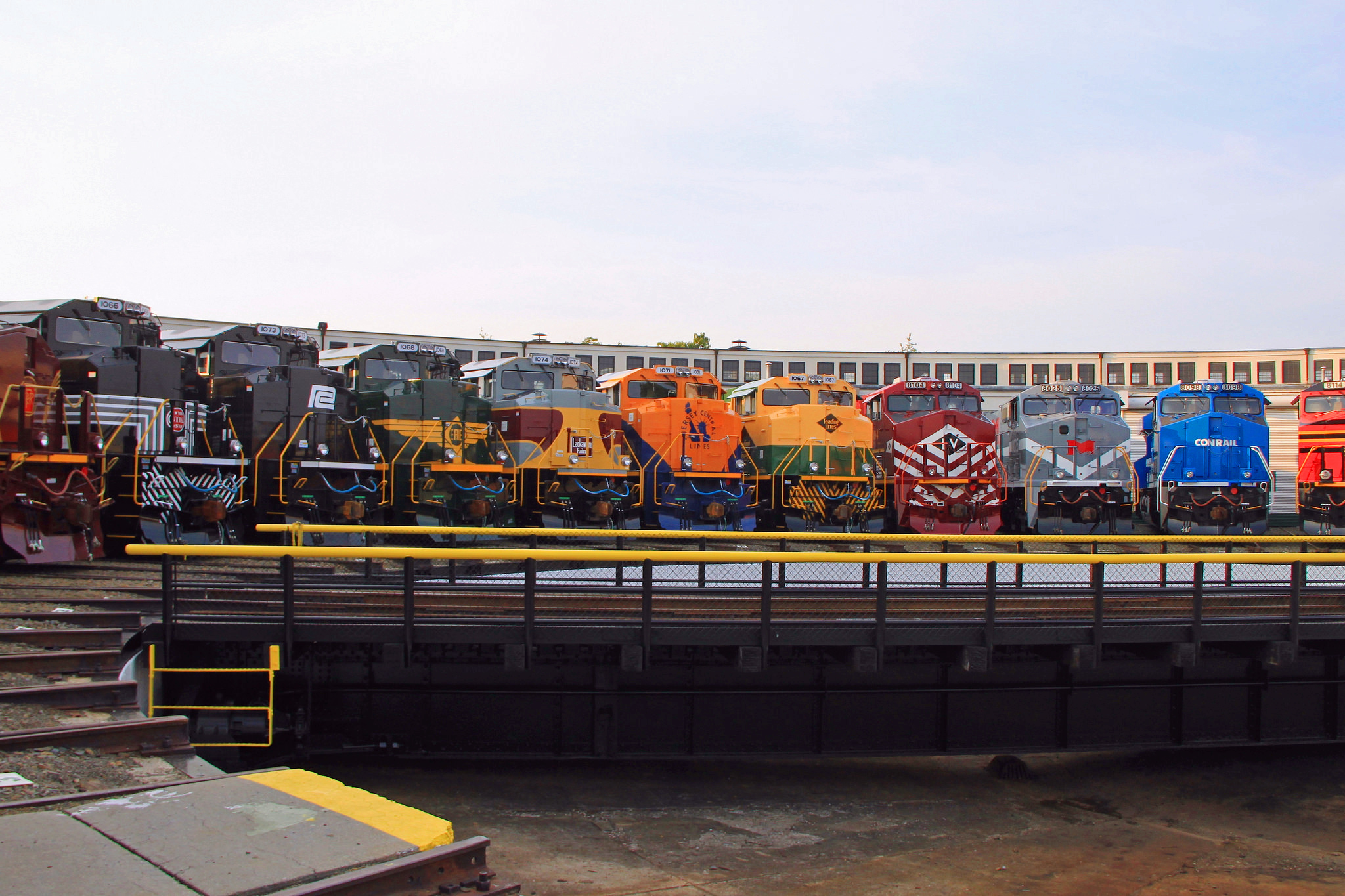 A line-up of Norfolk Southern's heritage locomotives situated around the turntable in Spencer, North Carolina during July of 2012. Warren Calloway photo.

There were originally 18 railroads honored, the first of which completed was Conrail ES44AC #8098.   However, this number blossomed to twenty over the next few months with the addition of Penn Central #1073 and Monongahela #8025.

Additionally, shop forces slightly altered the nose of the Lehigh Valley unit a few weeks after it was initially outshopped, removing the original gold pinstripe and "LV" diamond.

In its place was a more prototypical look sporting large white, angled stripes on the lower-half of the nose with a centered "LV" black diamond outlined in white.

Since the release of Norfolk Southern's Heritage Program two more noteworthy preservation events have taken place, both occurring in 2013; the announcements regarding the restorations of Norfolk & Western #611 by VMT and Union Pacific acquiring 4-8-8-4 "Big Boy" #4014.

The latter has since became part of UP's heritage fleet when she was restored to operation in 2019 while #611 finished up its excursions over the NS system in 2015.  Today, she pulls tourist trains wherever and whenever she can.