One of the most successful builders of steam locomotives is perhaps the least known, the H.K. Porter Company, which is partly due to the fact that it typically did not market its models to the general railroad industry.

After Porter began, just after the end of the Civil War, it produced more than 8,000 light duty and small steam switchers both domestically and overseas for all types of industrial applications, from mining operations to sugar plantations.

Most of its designs were quite small, such as the very popular 0-4-0T "dinky."  After World War I the company slowly began to lose market share, especially in the 1930s with the coming of the diesel switcher. It never, truly dedicated itself to this new form of motive power and instead sold out after World War II.

Interestingly, today, the H.K. Porter name carries on under a new owner, which uses it as a means of marketing to sell various types of hand tools.

Additionally, dozens of Porter steam locomotives can be found in use around the country on tourist lines and railroad museums due to their relative inexpensive nature to restore and operate. 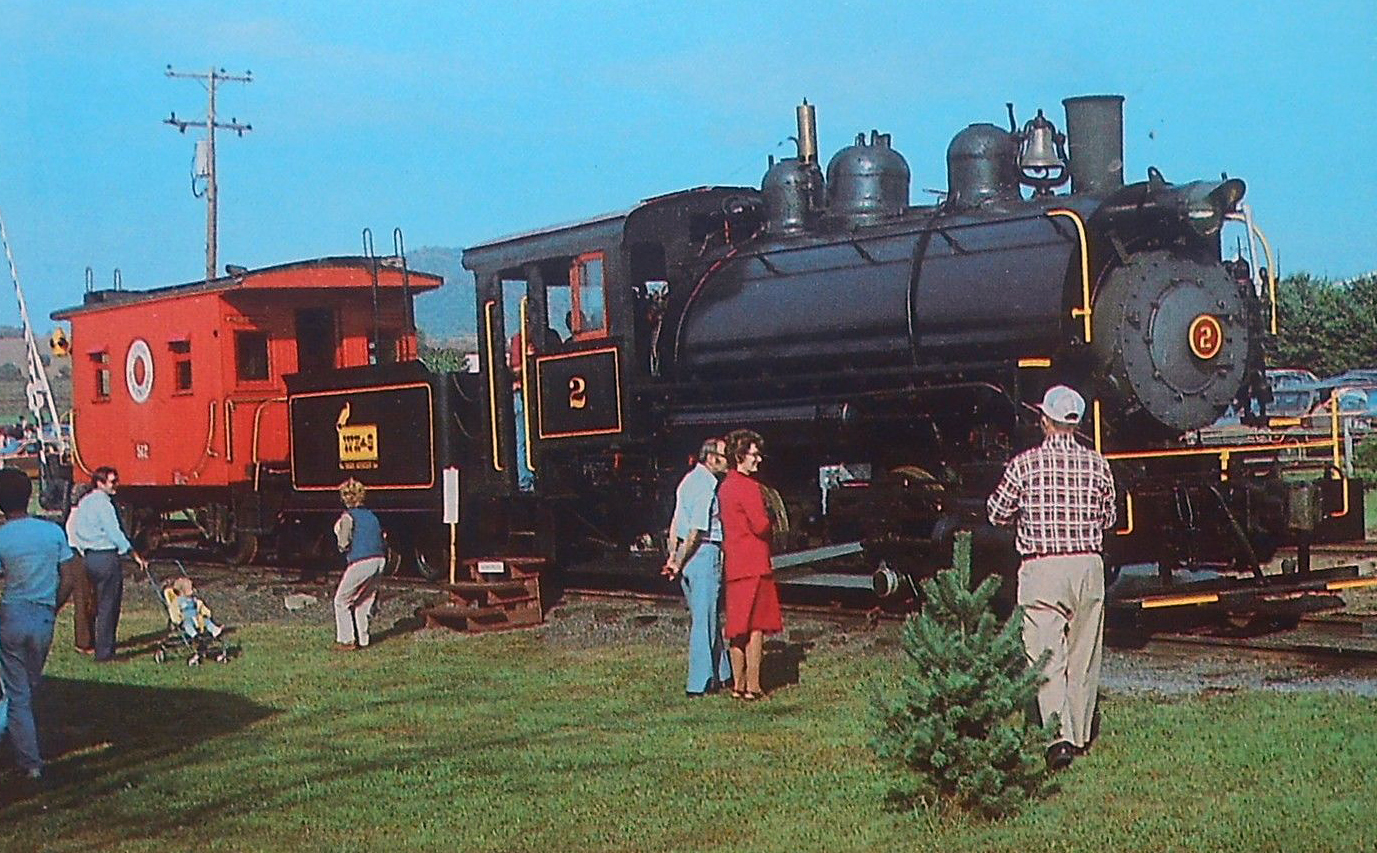 A postcard of Wanamaker Kempton & Southern 0-4-0ST #2 is seen her on display in Kempton, Pennsylvania on September 3, 1982. The locomotive was built for the railroad by H.K. Porter in 1920. John Hartman photo.

The H.K. Porter Company dates back as Smith & Porter, founded in 1866 by partners Henry Porter and John Smith which opened a machine shop in Pittsburgh, Pennsylvania to repair and build a wide range of industrial equipment.

After just a year doing this type of work they received an order in 1867 for a small, industrial-sized steam locomotive by the New Castle Railroad & Mining Company of New Castle, Pennsylvania. In conjunction with a small Pittsburgh-based locomotive manufacturer, David Bell & Company, they came up with a 42-inch, narrow-gauge 0-4-0T design.

The success with this little steamer convinced the company to focus exclusively on building locomotives. In 1871 Porter merged with David Bell to form the Porter, Bell & Company while Smith left to form his own locomotive business, Smith & Dawson Locomotives (that became the National Locomotive Works). 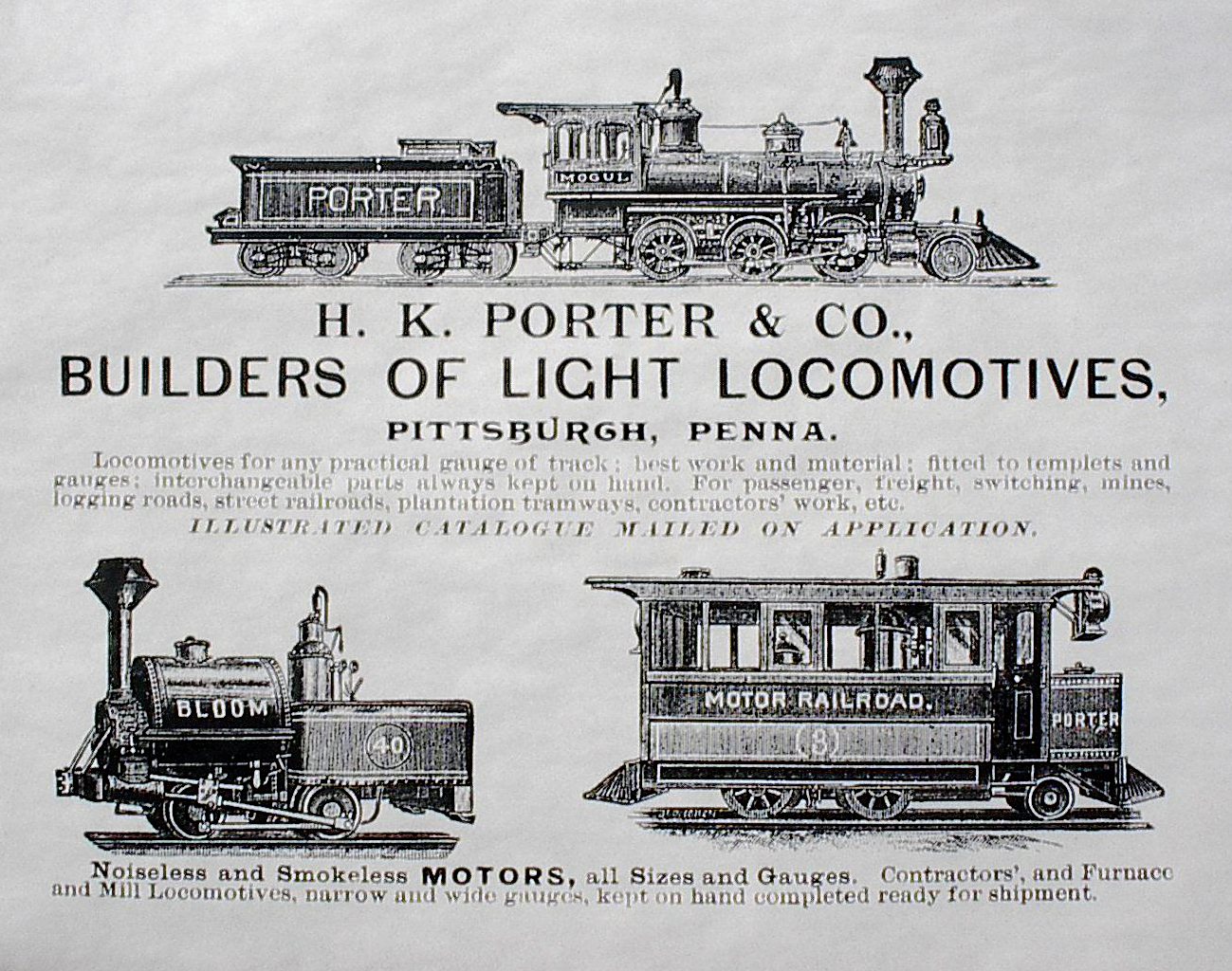 Prior to all of these company name changes and mergers, Porter spent the rest of the 19th century refining its product and along the way earned a reputation for building high quality, reliable, and rugged light duty locomotives (a trait that was stressed early on by Porter himself).

Since the company marketed its designs to small railroads and industries the 0-4-0T mentioned above or the 0-6-0T saddle tanks tended to be its best sellers.

Outwardly, Porter's locomotives became easily distinguished from other builders for a number of cosmetic touches applied to them including cylinders cast with the company name and the cab number painted within a small circle (unless otherwise noted).

Another significant reason that Porters became so popular, aside from their reliability, was in how the company marketed its product.

In many ways it was one of the first proponents of standardization offering replacement parts and stock locomotives, which were not customized like virtually all main line models.

This philosophy was decades ahead of its time and did not become popular within the general railroad industry until Electro-Motive showcased its new EA and FT diesel-electric locomotives in the mid/late-1930s.

Even these larger wheel arrangements, however, were still primarily tailored to non-railroads such as lumber companies, brick and cement plants, power companies, and even various branches of the military.

Still, some common-carrier railroads did come to purchase Porter locomotives for secondary and yard duties like the Alaska Railroad. Interestingly, even a few streetcar lines used Porters! 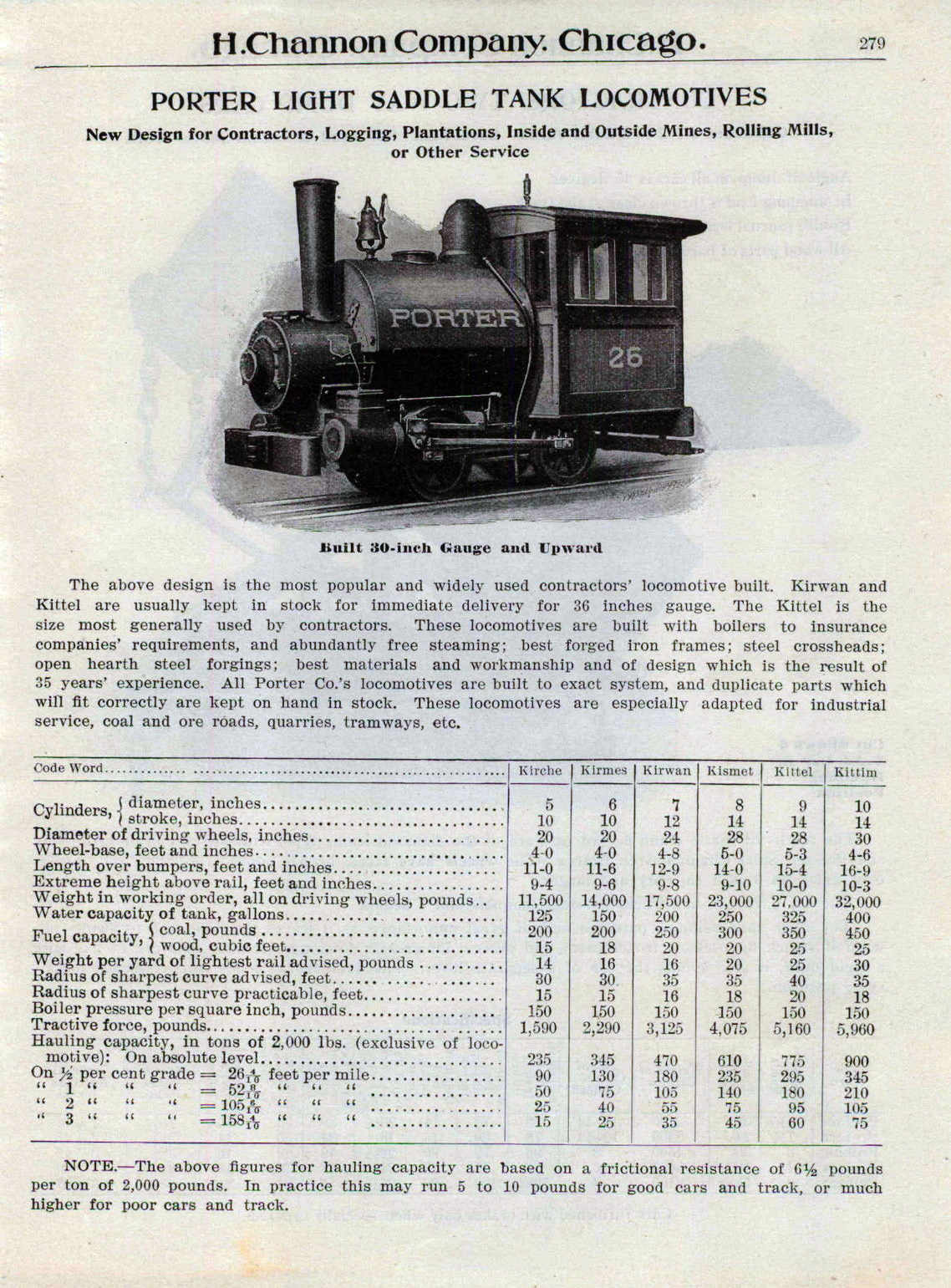 In 1890 the company began marketing a compressed-air locomotive for use in coal mining operations. Instead of using traditional steam, compressed air held within two tanks situated where the boiler was usually located powered the pistons and rods.

The purpose of the design was to eliminate the burning of fuel to make steam, which was dangerous within a mine, as it could cause explosions due to the buildup of methane gas naturally released by coal.

The locomotive proved to be highly successful with more than 400 built (Porter would come to construct roughly 90% of them). The year 1899 also saw Porter reach its peak in terms of locomotives manufactured, more than 400 in a single year.

The prosperity occurring during these years led the company to open a new plant in Pittsburgh at that time as well. 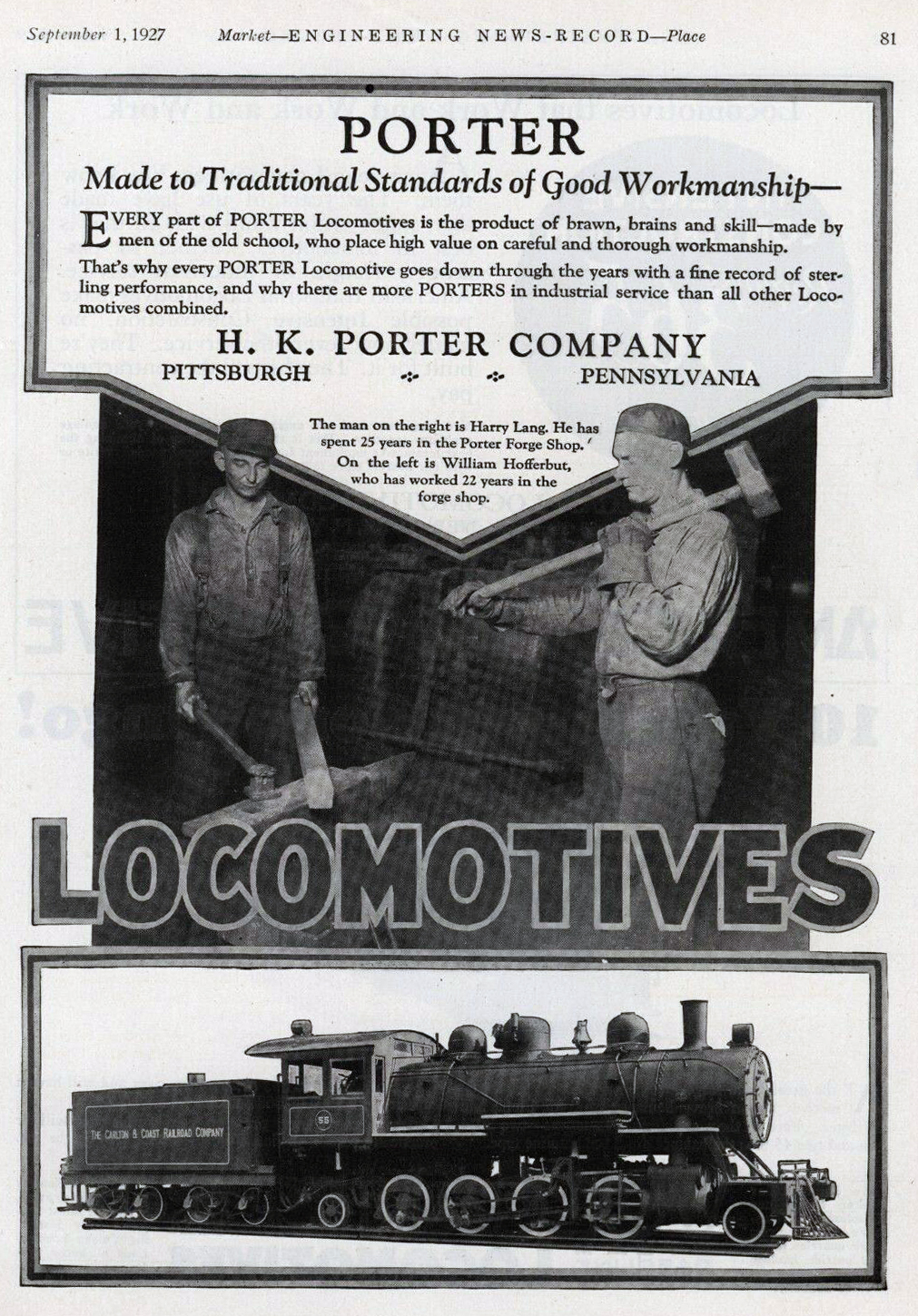 The H.K. Porter Company manufactured more than 7,800 locomotives at its plant in Pittsburgh's Lawrenceville neighborhood between 1867 and 1950. Its market was geared largely towards the industrial/military sector where it turned out thousands of switchers. Several are preserved across the country today.

The builder also patented another new, non-combustible design around 1911; known as the fireless locomotive it essentially used a pressurized cylinder of steam and hot water to power the pistons and rods.

Surprisingly, it turned out to be more reliable than earlier compressed-air design, which it ultimately replaced.

While Porter tested gasoline-powered locomotives as early as 1910 it never spent heavily in research and development, instead relying on its popular small, steam-powered designs. Like Whitcomb and Davenport,

Porter remained successful through World War I building small, narrow-gauge locomotives for the French trench railways. However, the company was in decline by the 1930s; its founder Henry Porter had died in 1921 and  diesel switchers were becoming popular by that time. 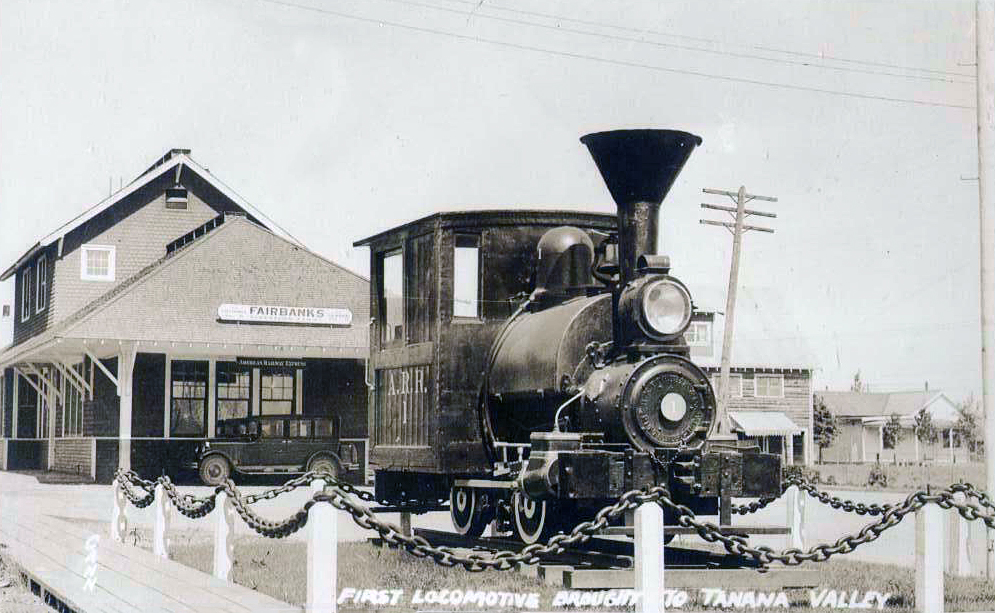 Alaska Railroad 0-4-0T #1 sits on display in Fairbanks, circa 1930's. The locomotive was built by H.K. Porter in 1899. Today, it is operational at the Tanana Valley Railroad in Pioneer Park, Fairbanks.

Bankruptcy was declared in 1939 and the H.K. Porter Company was sold to Thomas Mellon Evans, who kept the name and hoped to revitalize the manufacturer.

Success  returned with the start of World War II as Porter, along with its two rivals and Vulcan Iron Works, were asked to construct a USATC (United States Army Transportation Corps) S100 Class 0-6-0 for use in the African campaign, and later in Europe as the war progressed with more than 400 built in all.

The company's fortunes again turned for the worse following the war as demand for steam locomotives had virtually ended; all switcher-type models were now being built by the four major manufacturers of Baldwin/Lima, Electro-Motive, American Locomotive Company, and Fairbanks-Morse.