Iowa Railroads In "The Hawkeye State"

Iowa railroads are known for traveling through flat, open countryside and farmland as far as the eye can see. The state, rich in railroad history, and even today is home to several important main lines, particularly those heading east and west.

Historically, the state was rife with agricultural branches handling everything from grain and corn to beans and animal feed.

Iowa then, as now defines the Heartland. Thousands of miles of tracks were laid down to serve the state's thousands of farms. In fact, too much trackage was laid down.

When trucks began taking this business from railroads numerous branches became redundant and unprofitable, resulting in thousands of miles pulled up.

Today, the state contains only about 40% of its peak rail mileage and you can see abandoned rights-of-way litter farm fields from east to west.

If you enjoy exploring abandoned rights-of-way Iowa is a must-visit.

In any event, along with the state's nearly 4,000 miles of operating railroads it is also home to several museums and excursion trains. In all, the Hawkeye State offers a little of everything! 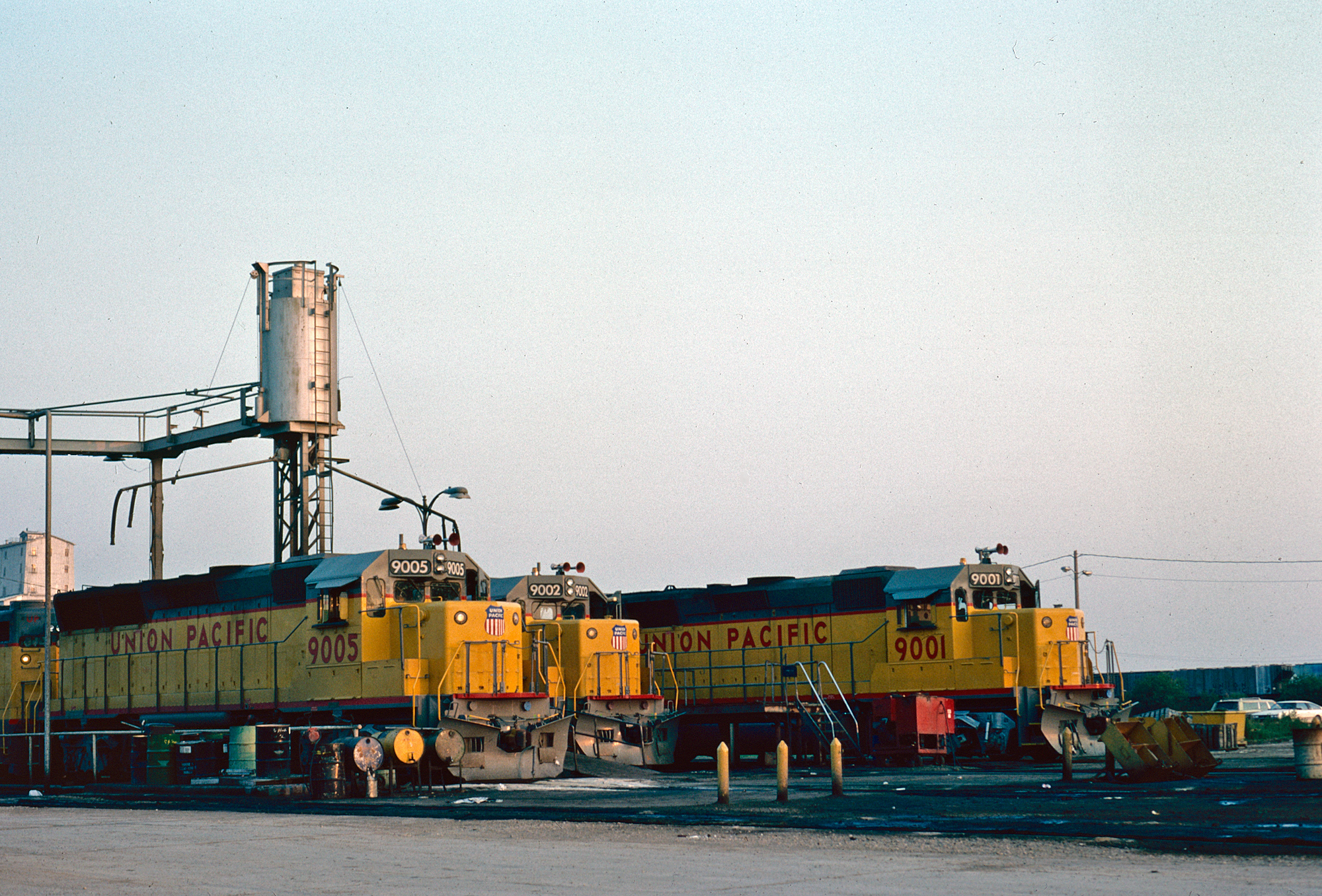 The state's railroads begin in 1853 when the Mississippi & Missouri was chartered to build a line between Davenport, Iowa City, and Muscatin which was completed in 1855.

While this railroad would become part of the now-classic Chicago, Rock Island & Pacific system it has a much more significant footnote in history.

When a steamboat hit its Government Bridge across the Mississippi River (the first such structure to cross the body of water when it opened in 1856) the steamboat company sued the railroad to have it removed as a hazard to water traffic.

The M&M hired attorney Abraham Lincoln to defend them. The case eventually went to the Supreme Court which ruled in the railroad's favor in 1862. 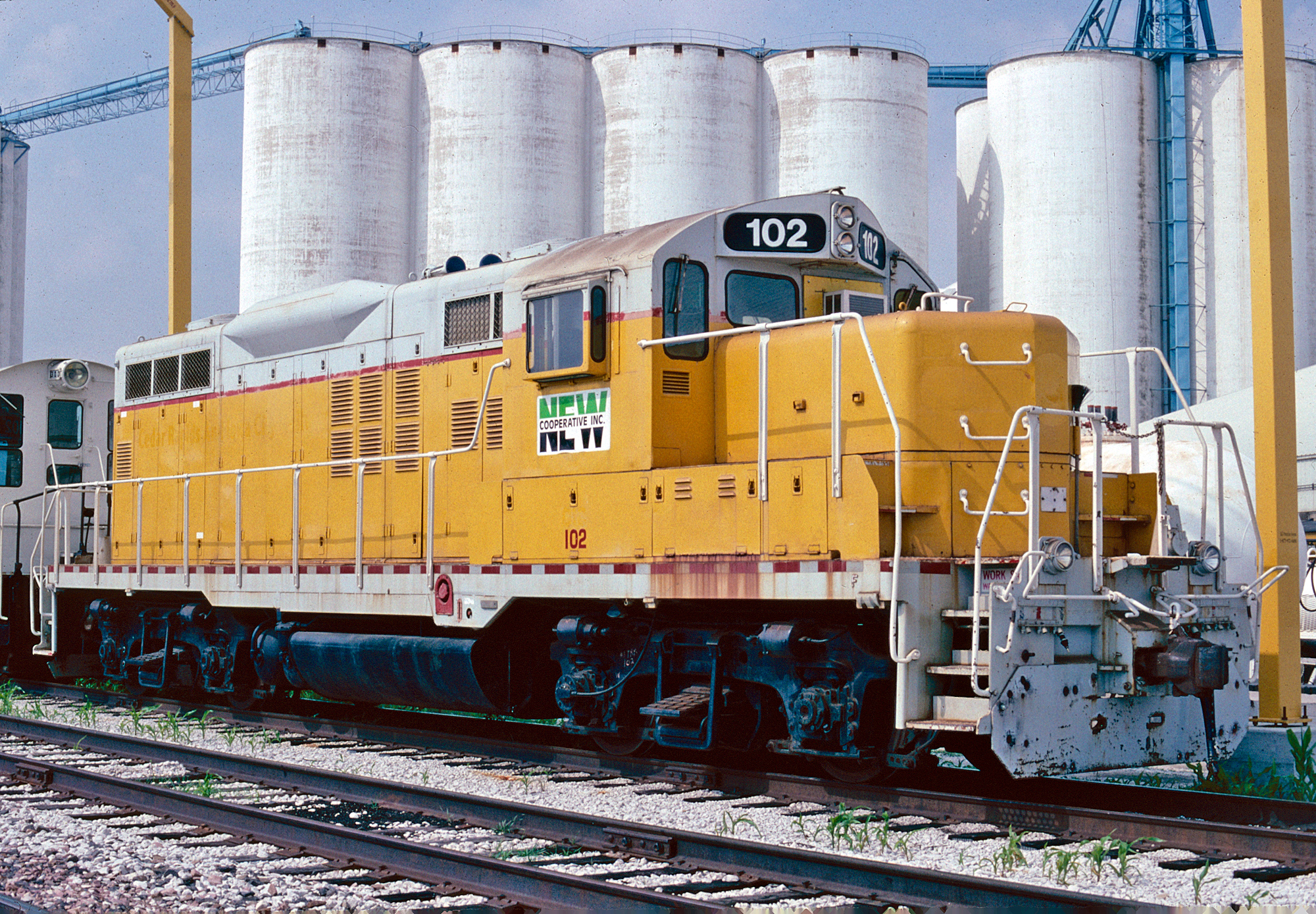 NEW Cooperative GP9 #102, built as Milwaukee Road #304, is between assignments at the elevators in Vincent, Iowa on September 20, 2007. Note the custom-installed window air-conditioner on the conductor's/fireman's side of the cab. Paul Wester photo. American-Rails.com collection.

In any event, following the opening of the M&M Iowa would be home to most of the west's and Midwest's best-remembered classic railroads from the Rock Island and Milwaukee Road to the Chicago & North Western Railway and Chicago, Burlington & Quincy Railroad.

Others include the Santa Fe (whose Transcon line clips the southeastern corner of the state for 17 miles), Illinois Central, Chicago Great Western Railway, and the Wabash Railroad.

Iowa epitomizes railroading in America's breadbasket.  This state was once littered with railroads traveling in every direction; most were secondary, agricultural branch lines served by names like the Milwaukee Road, Chicago & North Western, Chicago Great Western, and Chicago, Burlington & Quincy.

Alas, competition steadily drove out rail service; today, just 39% of Iowa's peak infrastructure remains in use.  If you are an abandoned railroad enthusiast who enjoys researching the subject, Iowa has a plethora of old rights-of-way.

The state's many abandoned branch lines are too numerous to mention here.  However, there are some notable through routes removed which need to be highlighted.  Most notable was the Milwaukee Road's Iowa Division.

After Milwaukee's management essentially gave up on running the railroad during the 1970's, and subsequently entered bankruptcy in 1977, the company shed thousands of miles.

Its most famous removal was, of course, the storied Pacific Extension from Montana to the Puget Sound.  However, the company also inexplicably gave up its Omaha gateway as well, abandoning its double-tracked main line across Iowa.

Into the 1950's this route was still witnessing the "Midwest Hiawatha" traveling at speeds at, or over, 100 mph...

Another notable was the Chicago Great Western's Des Moines-Kansas City main line.  The Chicago & North Western acquired the CGW in 1968 and subsequently spent the next two decades abandoning most of its network.

This also includes the CGW system in northern Iowa, heading east towards Chicago and north towards the Twin Cities.

Finally, the Chicago, Burlington & Quincy operated a secondary route across Iowa in the state's southern periphery, originally built by the Keokuk & Western and Humeston & Shenandoah Railway.

The latter was partially removed as early as 1935 while the former was pulled up in the early 1980's. 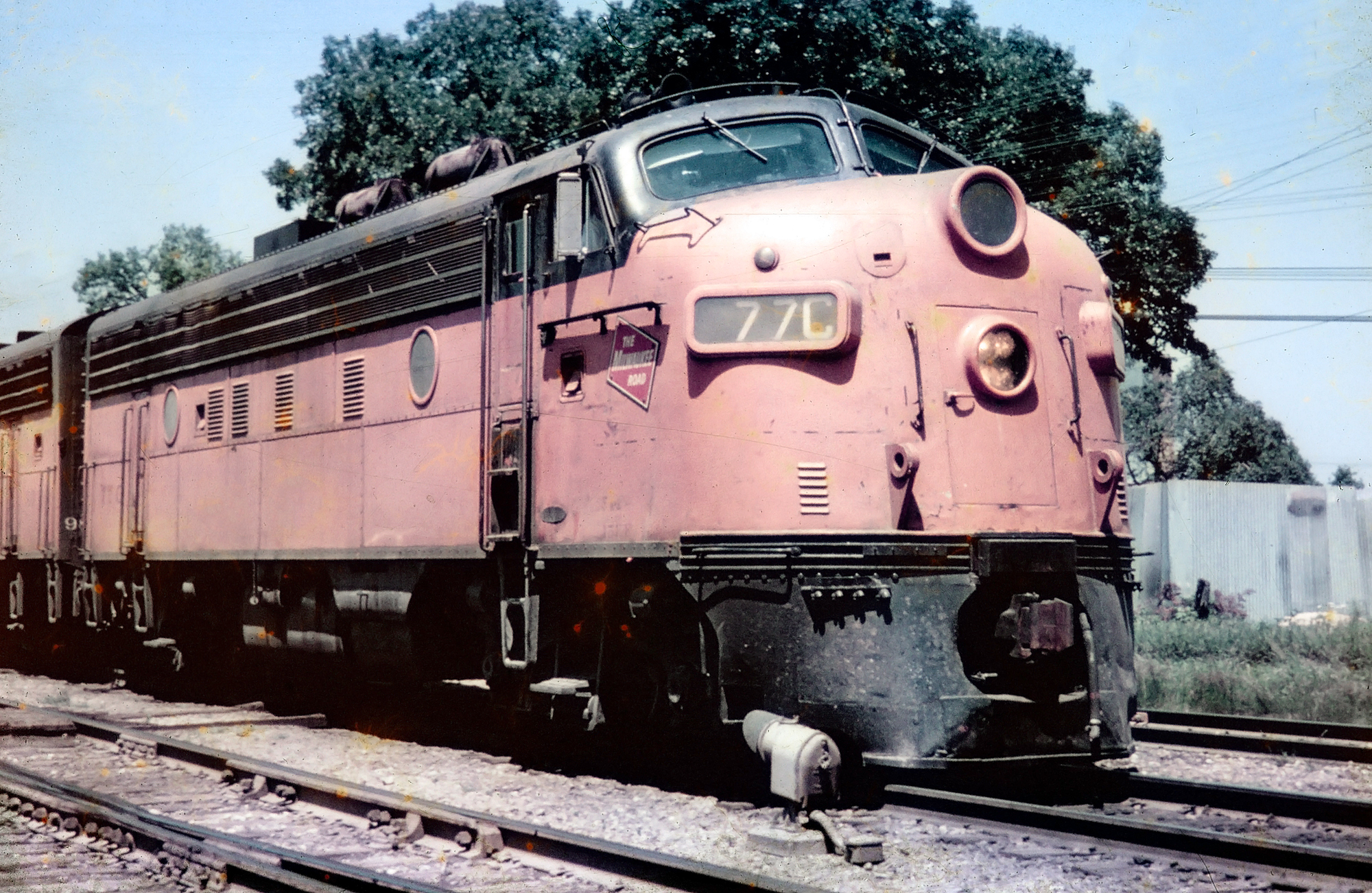 With so many classic railroads once dotting the state, and its sprawling web of agricultural branch lines, it is not surprising that Iowa ranked near the top in terms of rail mileage.

While today it carries just 40% of its original railroad infrastructure, Iowa is still home to several important rail lines. 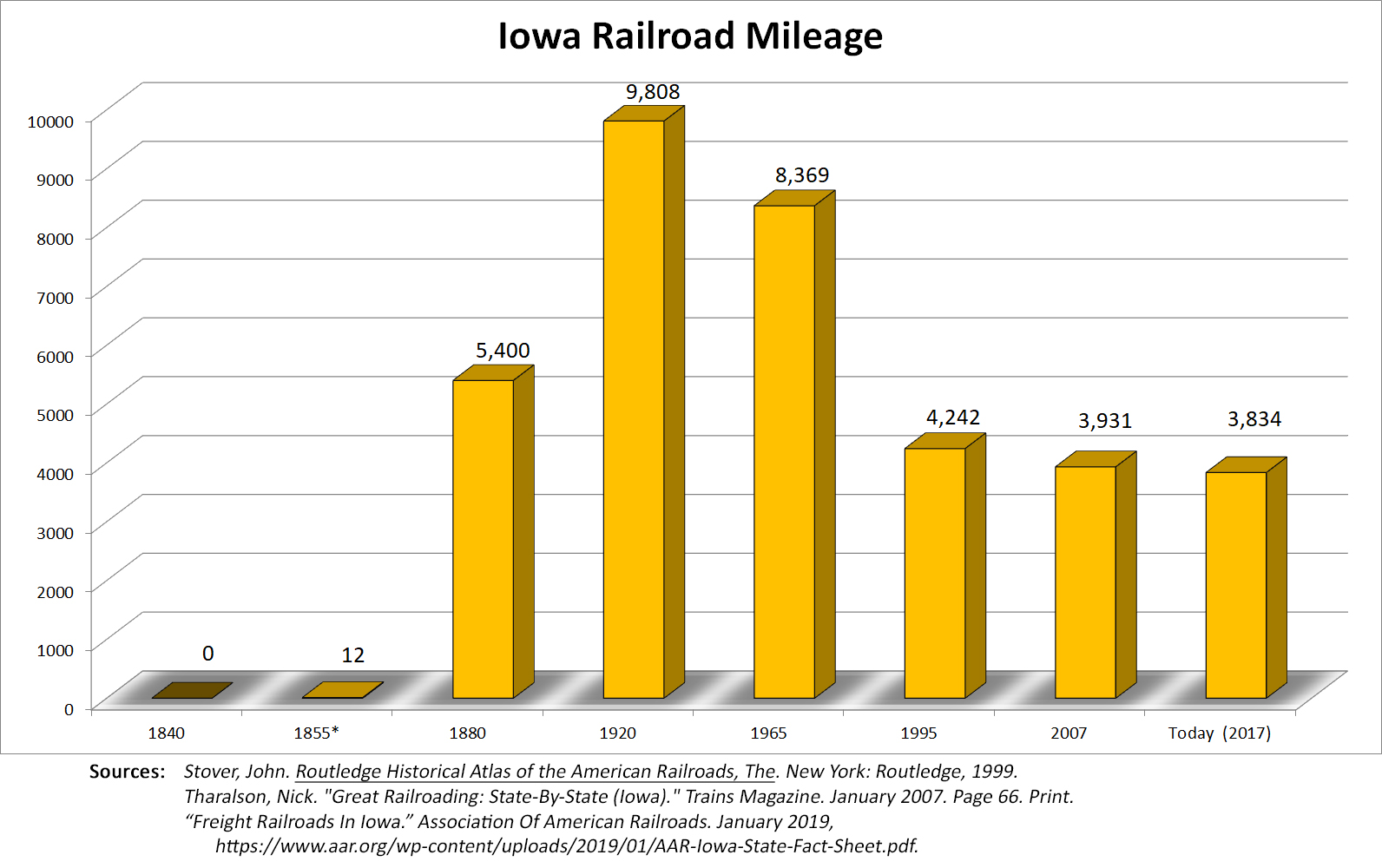 * Iowa's first railroad was the Mississippi & Missouri, formed in 1853 to link the state's two major rivers; the Mississippi at Davenport with the Missouri at Council Bluffs.  It was a component of the Chicago & Rock Island to continue its westward expansion, a system which later became the modern Chicago, Rock Island & Pacific.

The line's first 12 miles were completed in June, 1855 when the locomotive 'Antoine LeClair' pulled an excursion that month between Davenport and Walcott.   In April, 1856 the M&M completed a bridge across the Mississippi River into Davenport, marking the first such structure to span the mighty waterway. 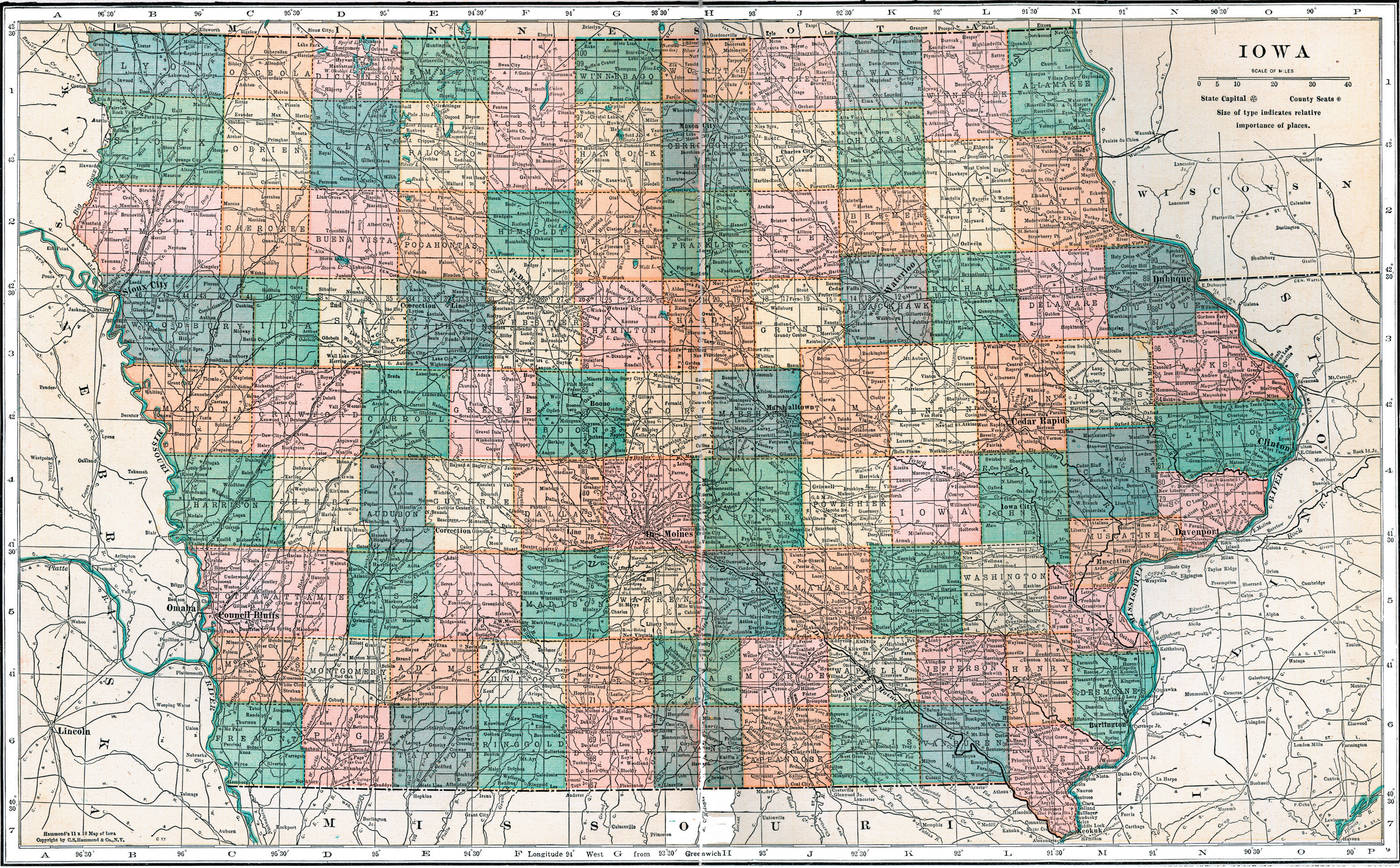 An Iowa railroad map, circa 1920. This illustrations shows the state's peak rail mileage, prior to major abandonments and cutbacks. Author's collection.

Today, Iowa's trackage is mostly operated by Class Is;

While the Rocket, City, and Hiawatha passenger fleets may no longer operate through Iowa, Amtrak does dispatch its California Zephyr and Southwest Chief through the state. 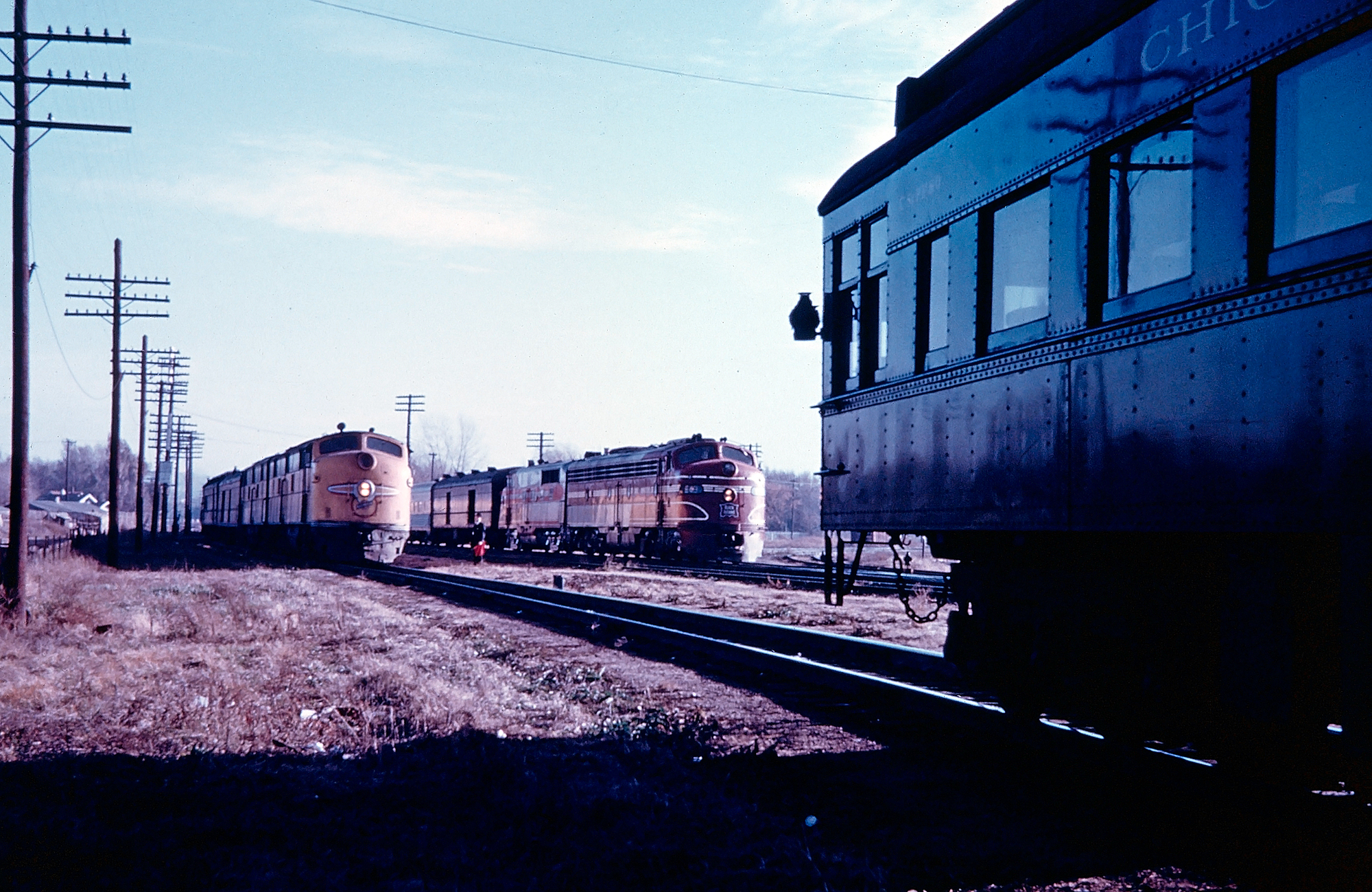 Passenger and freight trains aside, Iowa railroads are also home to a number of tourist lines and railroad museums, the most famous of which is likely the Union Pacific's own, the Union Pacific Railroad Museum based in Council Bluffs (it alone, is worth the trip to see!).

Finally, don't forget about the company Rail Merchants International, a dealer in used railroad equipment for sale to the general public, which is based in Iowa. If you have the resources you can own your own boxcar or caboose!