The Iowa Interstate Railroad (reporting marks, IAIS), headquartered in Cedar Rapids, Iowa, is a Regional railroad based in the Midwest and operates over 500 miles of trackage.

Operating in historic granger country its current system operates between Chicago and Omaha, Nebraska strategically located with connections with all seven North American Class I carriers.

Interestingly, while the Iowa Interstate inherited an important main line from a classic fallen flag line (the fabled Rock Island) it struggled for several years to break even, let alone turn a profit.

Thanks to a resurgent industry and new business opportunities, today the railroad is seeing record carloads and profits, so much so that it has been able to purchase new locomotives!

For the Rock, it is a true shame the railroad was not provided some type of federal assistance to continue its recovering efforts in the 1970's.

Management at the time was working diligently to do so but ultimately ran out of time before the bankruptcy judge pulled the plug (a decision the judge did not make hastily).

Thankfully, several components of the old Rock Island survive today, including that which is operated by the Iowa Interstate. 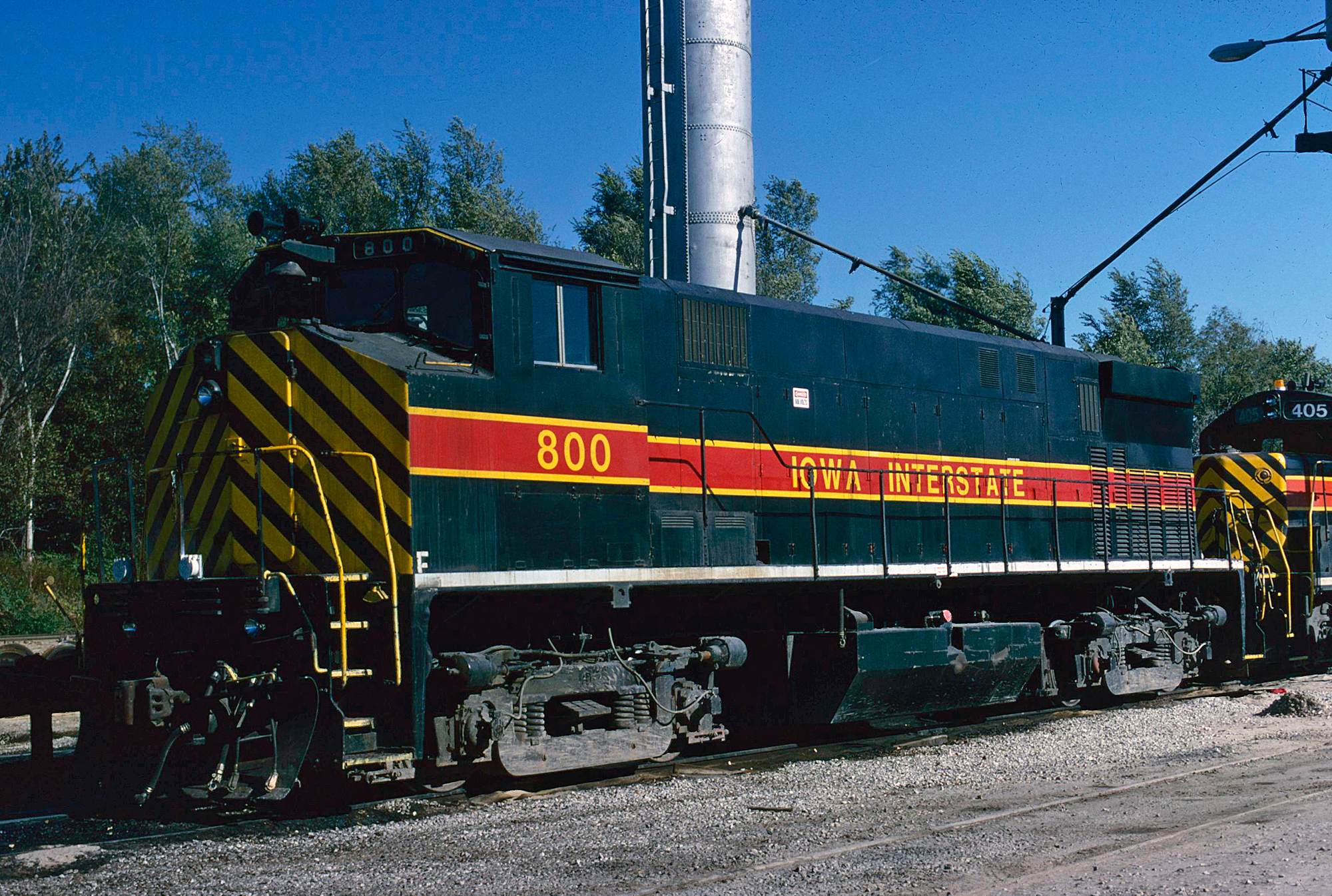 The history of the Iowa Interstate Railroad is a fascinating one. In the early spring of 1980 the Chicago, Rock Island & Pacific, the venerable "Rock Island", was in liquidation as its creditors deemed the company unfit to continue operating a railroad and began selling off its assets.

As former routes went up for sale numerous railroads and agency quickly scooped up the most important lines (interestingly, much of the original Rock Island is still in use today).

What would become the Iowa Interstate began life as the Iowa Railroad on June 1, 1982 when this little shortline purchased 375 miles of the Rock's former Chicago-Council Bluffs main line between the latter city and Bureau, Illinois.

Unfortunately, at the time the line saw little traffic with few online businesses, and while it lay in rich farmlands the ethanol boom of the 2000s was decades away. 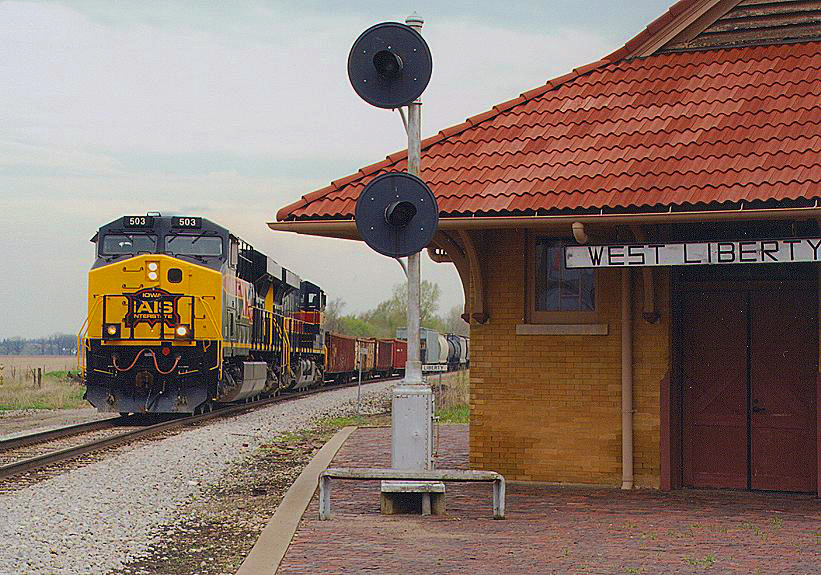 Two years later, in mid-November, 1984 the state of Iowa, a group of shippers, and the historic Cedar Rapids & Iowa City Railway (Crandic) combined forces to purchase the line themselves for $31 million.

This move formed the Heartland Rail Corporation and was renamed as the Iowa Interstate Railroad.

A trio of experienced railroaders, Paul Banner, Paul Victor, and Harry Meislahn were tasked with getting the upstart off and running.

While the railroad was able to gain trackage rights over CSX between Utica, Illinois and Blue Island Yard (Chicago) with little available cash, a patched together fleet of locomotives, worn out track, and few shippers they not only lost millions during their first five years of service but also could not attract new business.

In 1990 things began to change, however, when Henry Posner took over as chairman and president of the IAIS. At the time Posner had only been a railroader for a few years.

However, he had the instincts of an efficient businessman virtually his entire life as his dad had owned a neon sign business since the 1930s.

Already wealthy from other business ventures over the years Posner slowly began to turn around the railroad's fortunes despite the company being millions in debt and traffic dropping for the first few years of his leadership.

However, traffic began rising in the mid-1990s and the railroad big break came in 2001 when Posner and partner Robert Pietrandrea purchased the rest of the Iowa Interstate and Heartland Rail from Railroad Development Corporation.

This meant getting the okay from Archer Daniels Midland (ADM), not only Iowa Interstate's largest customer but also majority shareholder of Heartland Rail.

Using their option to purchase the railroad themselves, they caught a break when ADM agreed to the deal and kept the agriculture giant as a shipper in the process.

Now completely free to run the railroad as they pleased the team turned their attention to improving the company's property and infrastructure and as well growing its customer base.

This happened actually rather quickly, as in 2002 the railroad not only broke 60,000 annual carloads but also turn a profit for the first time.

In 2004 they were able to secure a Federal Railroad Administration $32.7 million Railroad Rehabilitation & Improvement Financing Loan (RRIF), nearly all of which went towards improving the property, which significantly increased transit times and reduced wear on equipment. 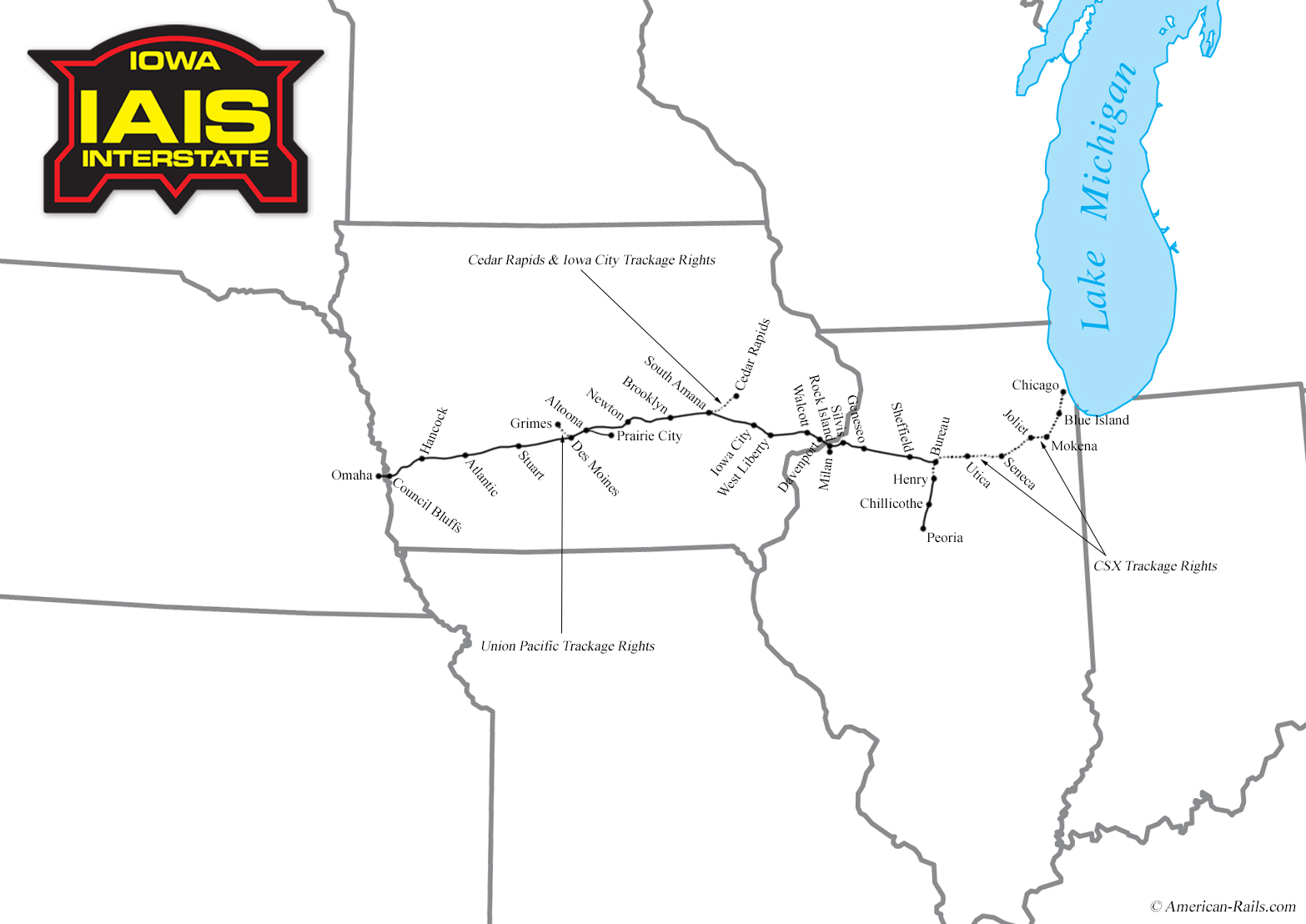 With new business being attracted regularly, and new ethanol plants locating along its lines, in 2006 ADM expanded its large corn-processing plant in Cedar Rapids even more.

An excerpt from Rock Island's official 1940 system map. Denoted in red is the current trackage the Iowa Interstate operates, which was the Rock's old Illinois Division. Author's collection.

Naturally, being located in America’s breadbasket the Iowa Interstate Railroad derives a large amount of its traffic on agricultural products.

However, the railroad is diversified in other traffic as well such as:


Today, it's single, largest commodity is, of course, ethanol. The Iowa Interstate's current system still stretches from Omaha, Nebraska to Blue Island Yard, which is its primary route.

The railroad also operates three branches: from west to east the first stretches from Atlantic, north to Harlan, Iowa; the second from Des Moines, north to Grimes, Iowa; and the last from Bureau, south to Peoria, Illinois.

Because the Iowa Interstate is unique in having connections with all seven of the current Class I systems, railfanning the railroad is quite interesting and exciting to say the least!

(A big thanks to the June, 2011 issue of Trains magazine and the article, "The Iowa Interstate Story" by Fred W. Frailey, for the help in writing this article.) 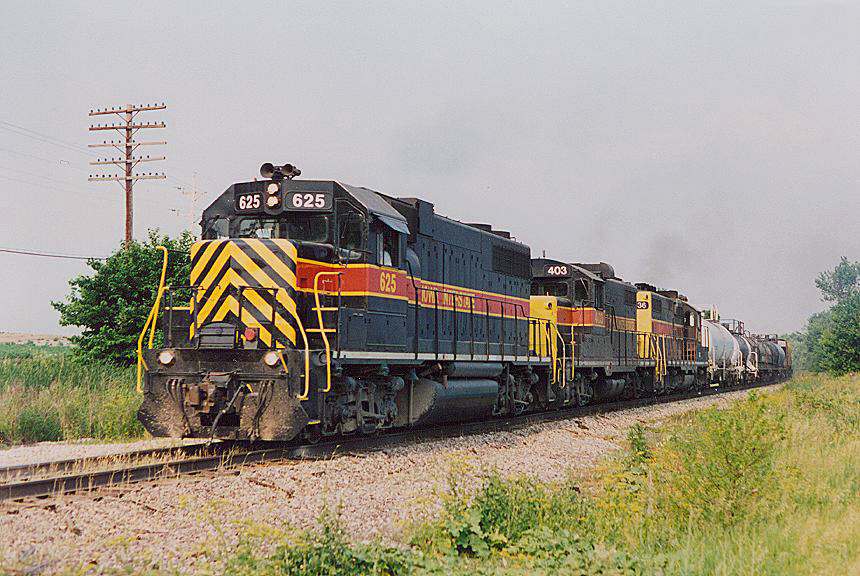 Iowa Interstate GP38 #625 along with a pair of GP10's (ex-Illinois Central units that are no longer on the roster) power an eastbound manifest through Minooka, Illinois on June 17, 1995. Doug Kroll photo.

Today, the railroad has become quite popular by the general public as well. They operate an annual "Hawkeye Express" to Iowa University football games in Iowa City using a heritage Rock Island unit to power the train.

Currently the Iowa Interstate's roster consists entirely of EMD Geeps save for a SW1200 switcher and a few SD38-2s.

As mentioned above, the stars of the fleet today are its 14 new General Electric ES44ACs (one of which is painted in a heritage Rock Island livery).