The Iowa Northern Railway (reporting marks, IANR), located in the northeastern section of Iowa and headquartered in Cedar Rapids, is a privately-owned short line made up largely of former Rock Island trackage following its 1980 liquidation.

Ironically, much of the old CRI&P network is still active today, including the section now under Iowa Northern ownership.

Following the railroad's 1981 debut it has, first by acquiring a former section of the Chicago Great Western between Cedar Falls and Oelwein in 2003.

Then, in 2011 it began operation over another Rock Island corridor between Belmond and Forest City.  Since its creation the railroad has steadily improved service and continues to grow; as a result, carloads have nearly quadrupled since the early 1980's.

During the mid/latter 2000's the railroad enjoyed bountiful traffic from the ethanol fuel boom thanks to its location within the heart of America's agricultural region.

Today, its traffic continues to be primarily agriculture in nature although now also includes aggregates, intermodal, and general merchandise.

Today, the railroad operates well over 150 miles of track and with a solid group managing the railroad, looks to have a bright future in the years ahead. 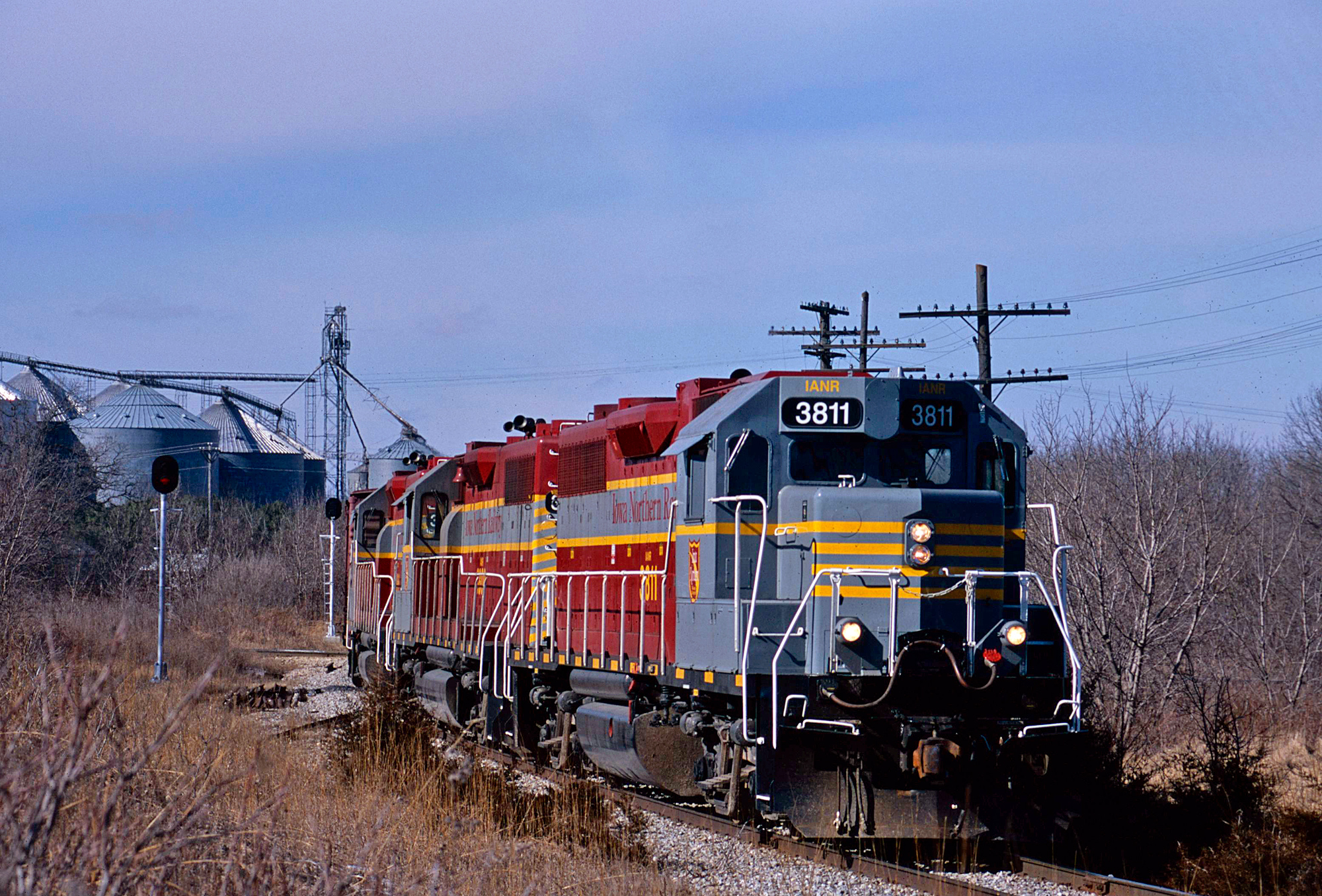 Iowa Northern GP38-2 #3811 is southbound on the old Rock Island at Nora Springs on February 17, 2005. The Cartersville Elevators can be seen in the background. Bob Eisthen photo. American-Rails.com collection.

A Brief History Of The Iowa Northern

The history of the Iowa Northern Railway begins in the early 1980s during a somber time.  The industry of that era was at its lowest point; thousands of miles across the nation were either already abandoned or suffering deferred maintenance.

In addition, several railroads had already declared bankruptcy, including the Chicago, Rock Island & Pacific.  In March, 1980 its assets were liquidated and the property sold to interested parties (the company's corporate name has since been revived by Terry Redeker, a short line based in Mississippi).

Of the hundreds of miles sold, the former main line between West Liberty and Manly, Iowa (which had provided the Rock a bypass between the Twin Cities and Chicago) was eventually acquired in whole by a group of grain elevators wishing to maintain service in the area.

Service initially launched on August 7, 1981 between Cedar Rapids and Vinton as well as between Shell Rock and Nora Springs (north of Cedar Falls). This trackage, as one might expect was in very poor condition, rampant with 10 mph slow orders.

Officially, the Iowa Northern Railway was created in 1984 when the property was purchased for $5.4 million.  Despite the track's condition, if these rail lines had been lost there would have been no way for grain to be shipped economically from the elevators.

With the creation of the Iowa Northern service was restored entirely between Cedar Rapids and Manly, although was still laden with slow orders. During the early years traffic hovered around 12,000 carloads annually. 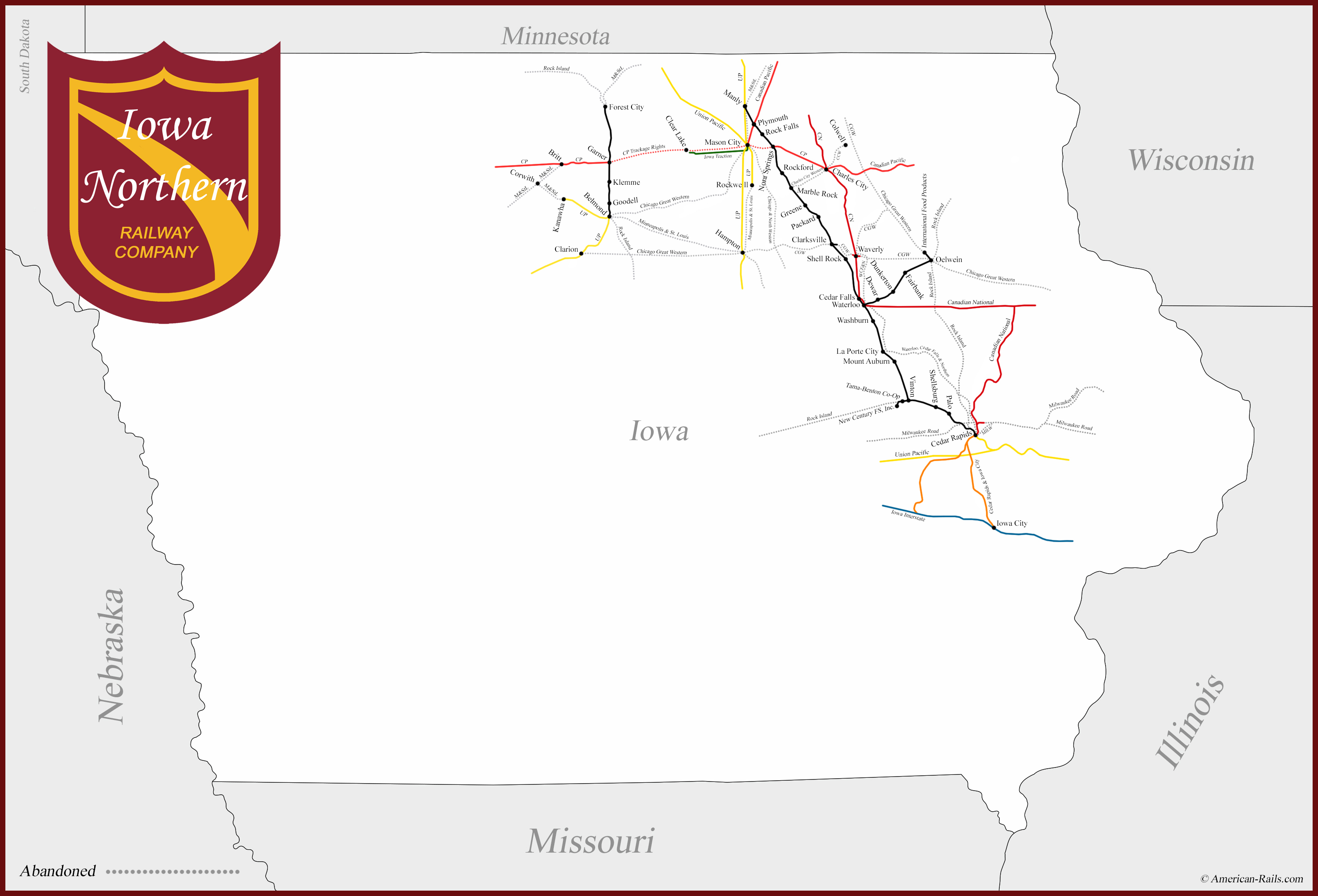 For the first ten years little changed, the locomotive fleet consisted of first-generation Electro-Motive models and the railroad worked to improve track conditions when possible.

Then, it was sold in 1994 to Iron Road Railways.  The railroad received a new head manager, Dan Sabin. Under his leadership the railroad began to prosper, as it looked to grow business relationships and attain state and federal subsidies to upgrade its property whenever and wherever possible. 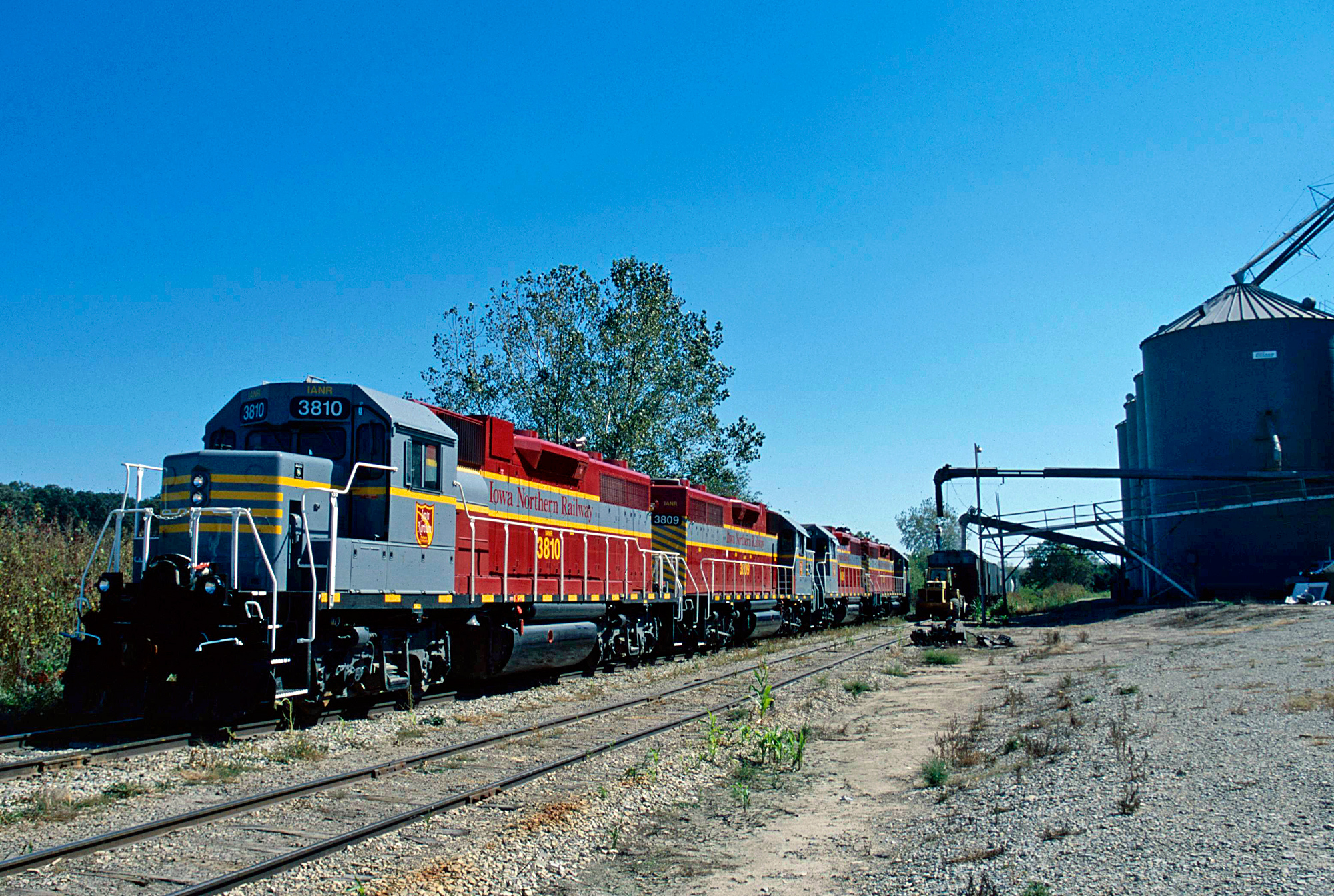 By 1994 the railroad still only handled about 15,000 carloads annually, not much more than when it first began about 10 years earlier.

Sabin slowly and steadily expanded traffic to the point whereby in 2006 the railroad was hauling more than 40,000 carloads a year and today that number continues to rise.

The IANR did have a major shakeup in 2002 when its parent, Iron Road, went bankrupt forcing it to divest of the Iowa short line.

Realizing the opportunity before him, Sabin himself stepped in to purchase the company and today he is still the primary owner.

Considering the railroad's state in 1981 it was very impressive to witness just how far things had came since that time.  The trackage would very likely have otherwise been abandoned, leaving another segment of the country without vital rail service. 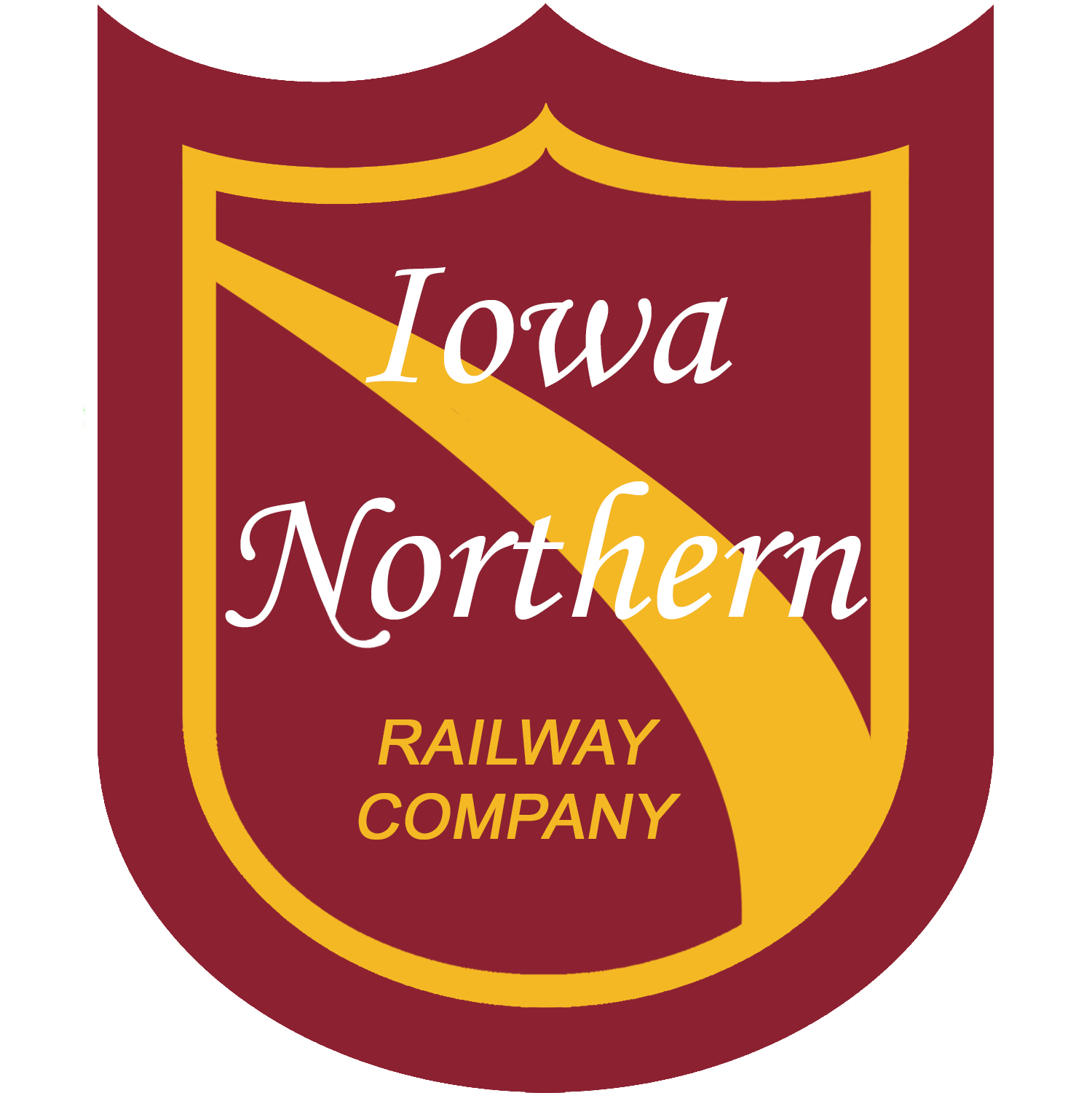 A year after Sabin took over ownership he successfully negotiated with Transco Railway Products, Inc. to operate their D&W Railroad, LLC.

The company, in 2002, had purchased a 23-mile section of former Chicago Great Western trackage from Union Pacific that connected Cedar Falls with Oelwein and the Class I was threatening to abandon the line.

Today, Iowa Northern still operates this trackage and overall now boasts a 163-mile system.   Perhaps most notable for the short line in recent years was its construction of the Manly Terminal, a complex designed to efficiently handle storage, loading, and transporting of ethanol from nearby plants.

It is unique within the industry and if the ethanol boom takes off once more the terminal is ideally suited for capitalizing on this market. 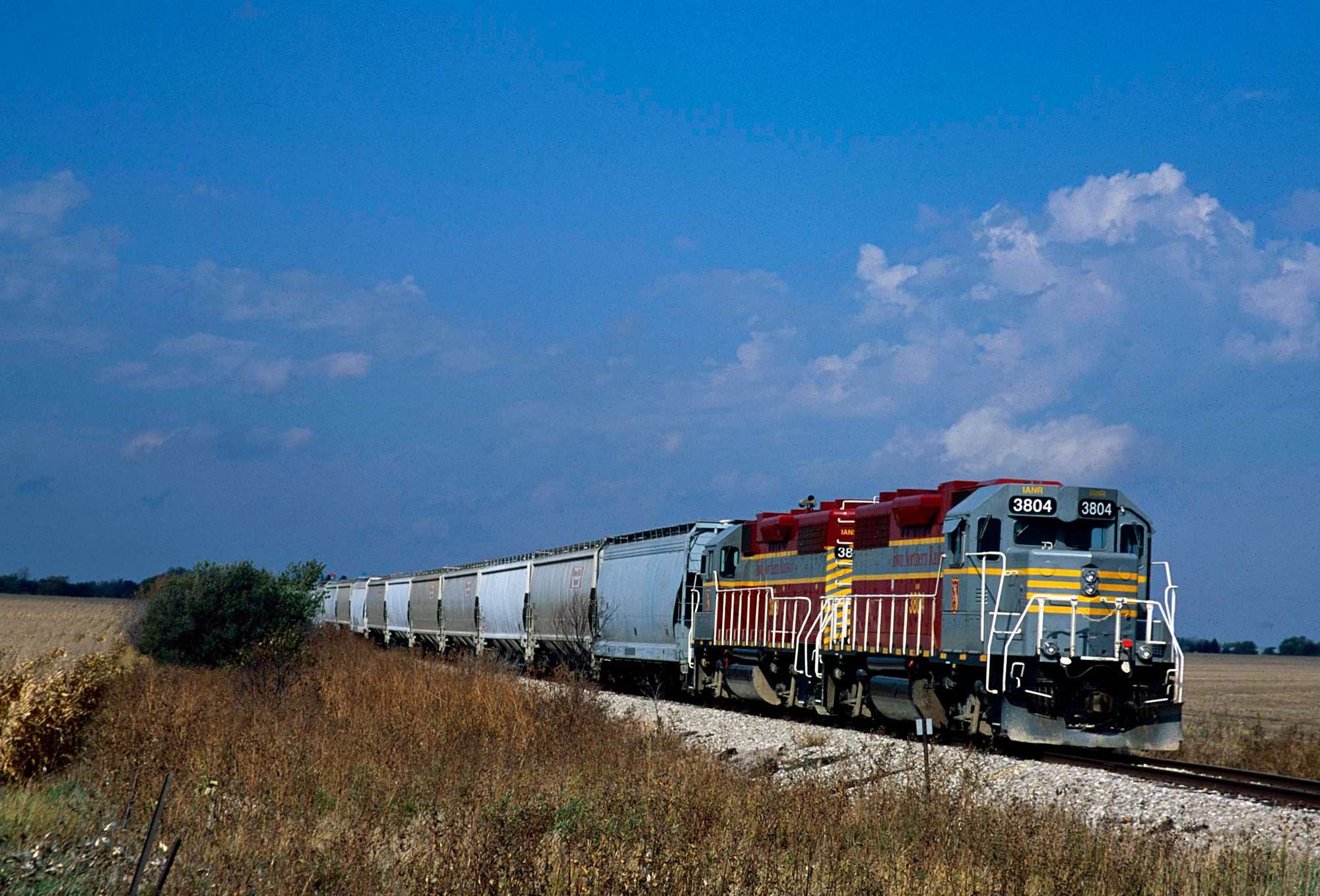 A pair of Iowa Northern GP38-2's are south of Manly, Iowa on the ex-Rock Island with a string of centerflow hoppers on October 5, 2007. Mark Lynn photo. American-Rails.com collection.

Aside from the railroad's current traffic in ethanol, grains, and chemicals it also provides railcar maintenance. For the public the Iowa Northern's Hawkeye Express has been a hit since it began service in 2006, transporting folks to the Iowa University's Kinnick Stadium during home games.

It is not, however, a regularly public excursion and used only during the fall season.

Perhaps one day, however, the railroad will elect to host such trips throughout the warmer months.  They have been a big hit.

For more information regarding the Iowa Northern Railway please click here to visit their official website, which surprisingly includes a wealth of information for a corporate site. Currently the Iowa Northern’s roster consists entirely of EMDs ranging from versions of F40s to GP40-2s.