The Illinois & Midland Railroad (reporting marks IMRR), today a Genesee & Wyoming property, is the succeeding operation to the historic Chicago & Illinois Midland Railway, a system which has roots dating back to the late 1880s.

Still predominantly based in coal traffic, a commodity, which has been a staple on the line from its earliest days, the railroad today sees over 100,000 carloads annually and continues to operate over much of the original C&IM system (today Genesee has gained an additional short line to directly serve Peoria).

Interestingly, the railroad still retains the original, "bridge" trackage rights to reach its southern lines much as it has for the last century or so. Along with a base in coal the I&M also moves agricultural products, building materials, minerals and municipal and industrial waste. 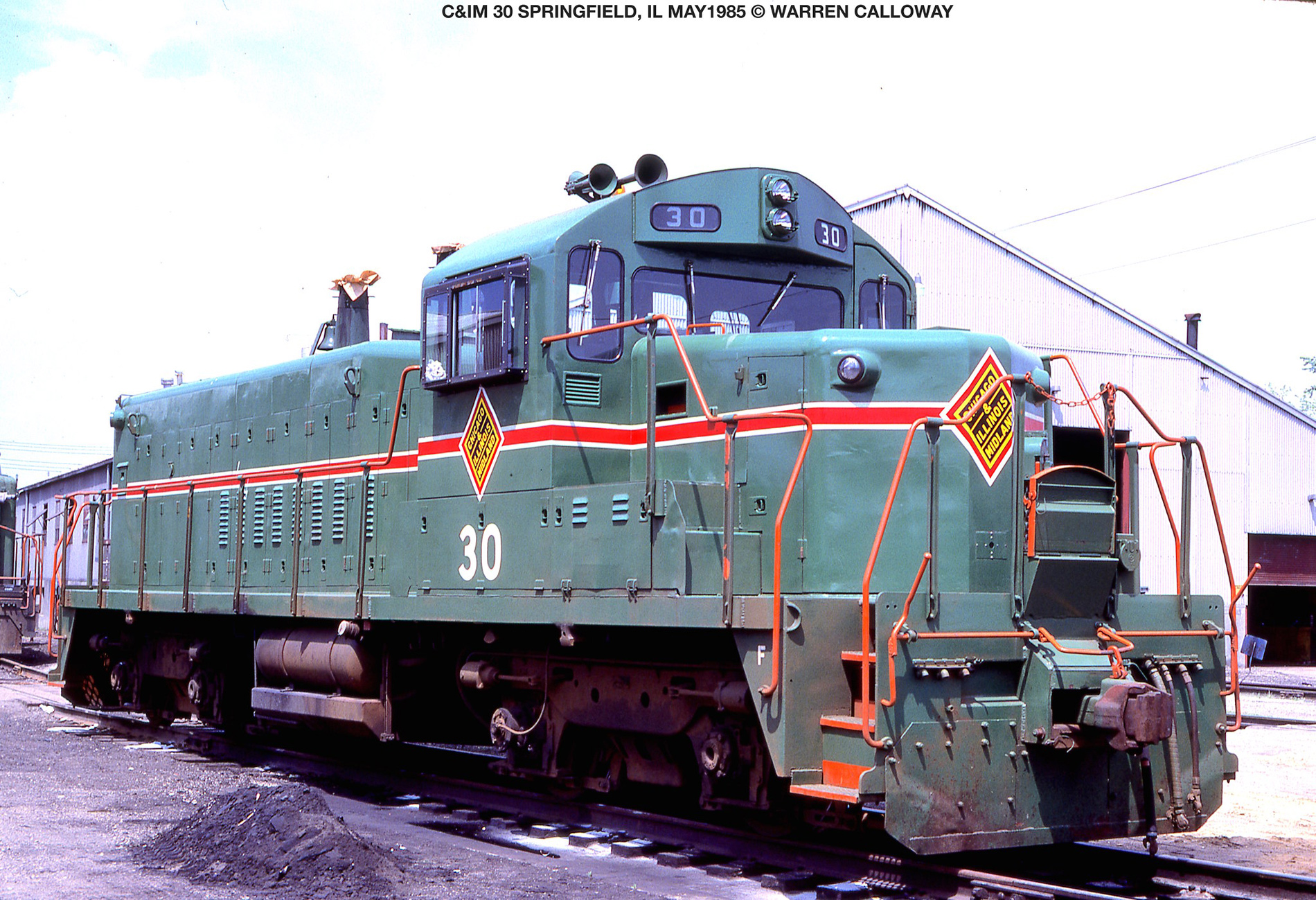 Chicago & Illinois Midland RS1325 #30 is seen here at the engine house in Springfield, Illinois during May, 1985. Warren Calloway photo.

To give a brief history of the Chicago and Illinois Midland Railway, it was historically a Class I system but in later years after the American Association of Railroads (AAR) reclassified the railroad industry it became one of the many short line systems found across the country.

The C&IM was never a large railroad stretching a little over 100 miles in length at its largest.

The earliest history of the railroad dates back to the Pawnee Railroad, a system chartered in 1888 that would eventually connect its namesake city with Illinois Central main line, located about 15 miles westward. This line was located on what would become the C&IM's southern route.

A History Of Illinois Railroads

After remaining an independent company for nearly 20 years the Pawnee was purchased by two businesses in 1905, the Chicago Edison Company (which later become the Commonwealth Edison Company, and today is known as the Exelon Corporation) and Illinois Midland Coal Company.

They renamed the operation the Chicago & Illinois Midland Railway and planned to use it as a means of moving coal from central Illinois to Chicago Edison's power plants near Chicago. To accomplish this task, however, they needed to grow the railroad much larger to reach Chicago. 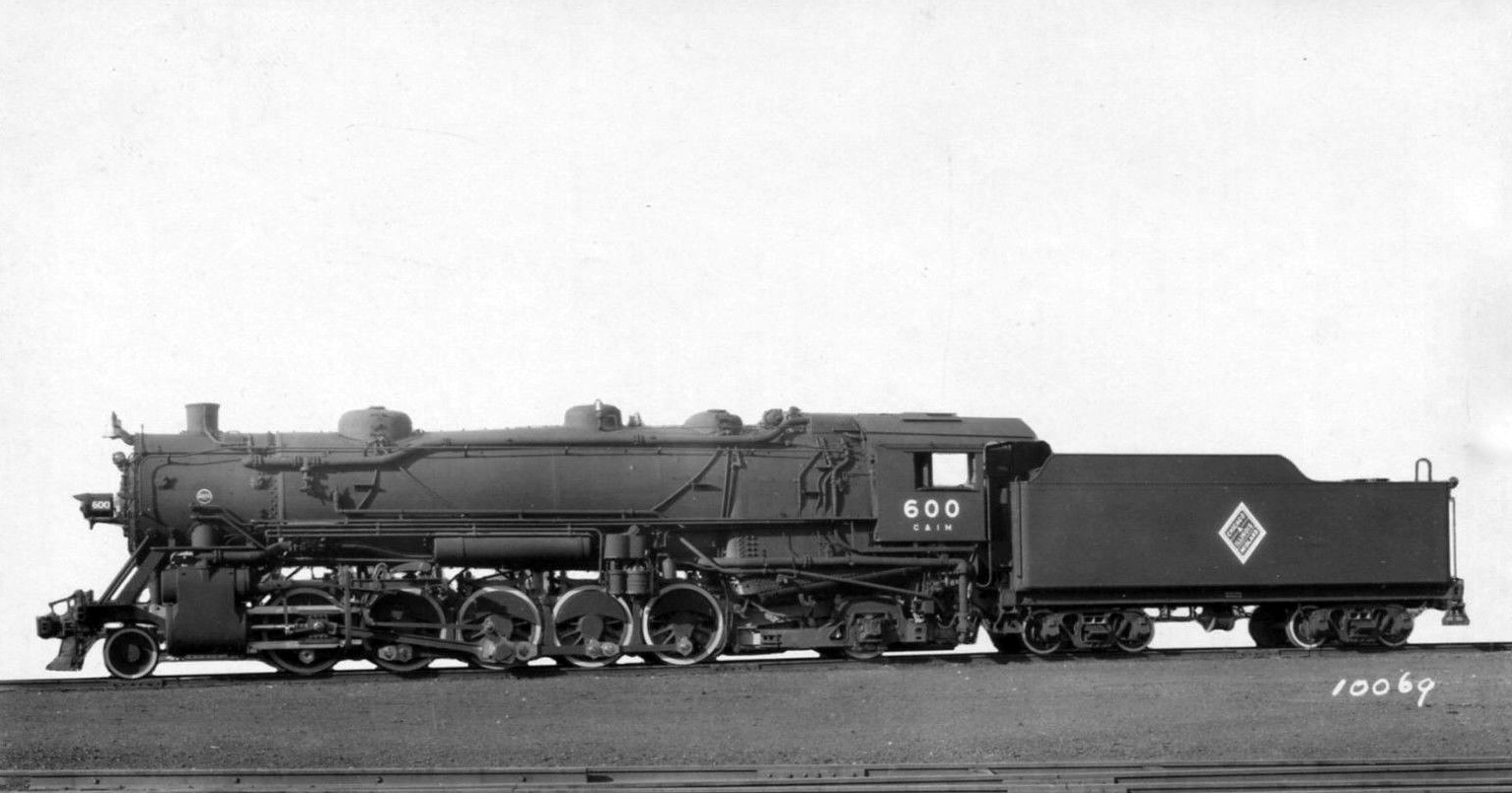 Eventually, the company was able to purchase the bankrupt Chicago, Peoria & St. Louis Railroad in 1920, which at one time had connected Pekin (near Peoria) with Havanna, Springfield, and even St. Louis.

However, an earlier bankruptcy around the turn of the century resulted in the CP&StL only operating between Springfield and Pekin/Peoria.

In any event, with the C&IM taking control of the CP&StL it more than doubled its size to 105 miles. The railroad had also built westward, connecting to Taylorville, Illinois which gave it an additional interchange to the Wabash Railroad. 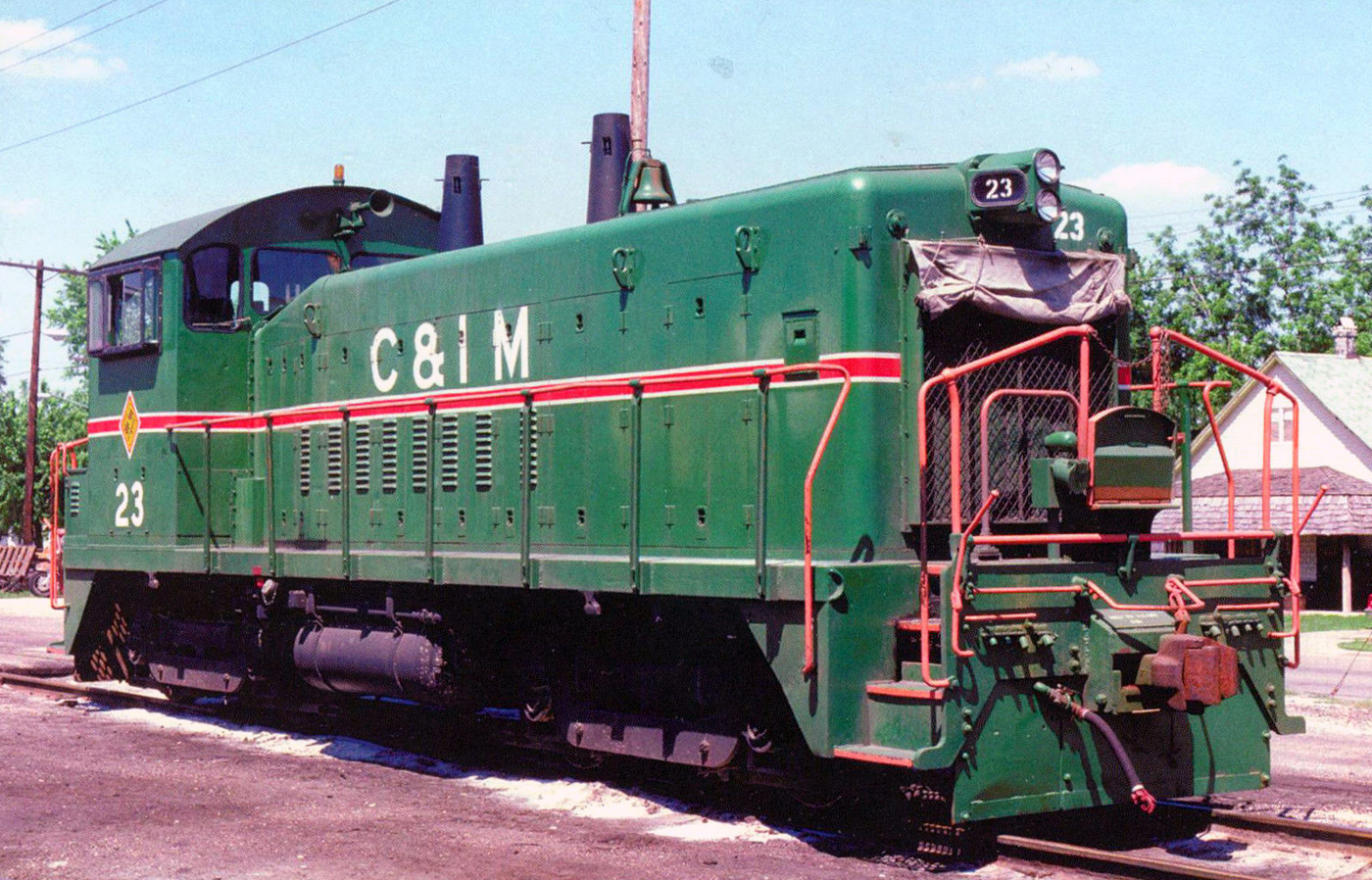 However, it was never able to acquire a line directly between Springfield and Pawnee.

To alleviate this problem the railroad negotiated trackage rights with the Illinois Central at a new interchange known as Cimic (west of Pawnee) which allowed the C&IM to directly reach its northern lines (overall the trackage rights extended about 16 miles, giving the railroad a total of 121 miles operate).

Unfortunately, however, the railroad could not find any additional routes of its own to serve Chicago directly.

As such, it operated for most of the rest of its ownership under Commonwealth Edison as a bituminous coal hauler, interchanging its traffic near Pekin with lines which could carry the freight directly to Chicago. 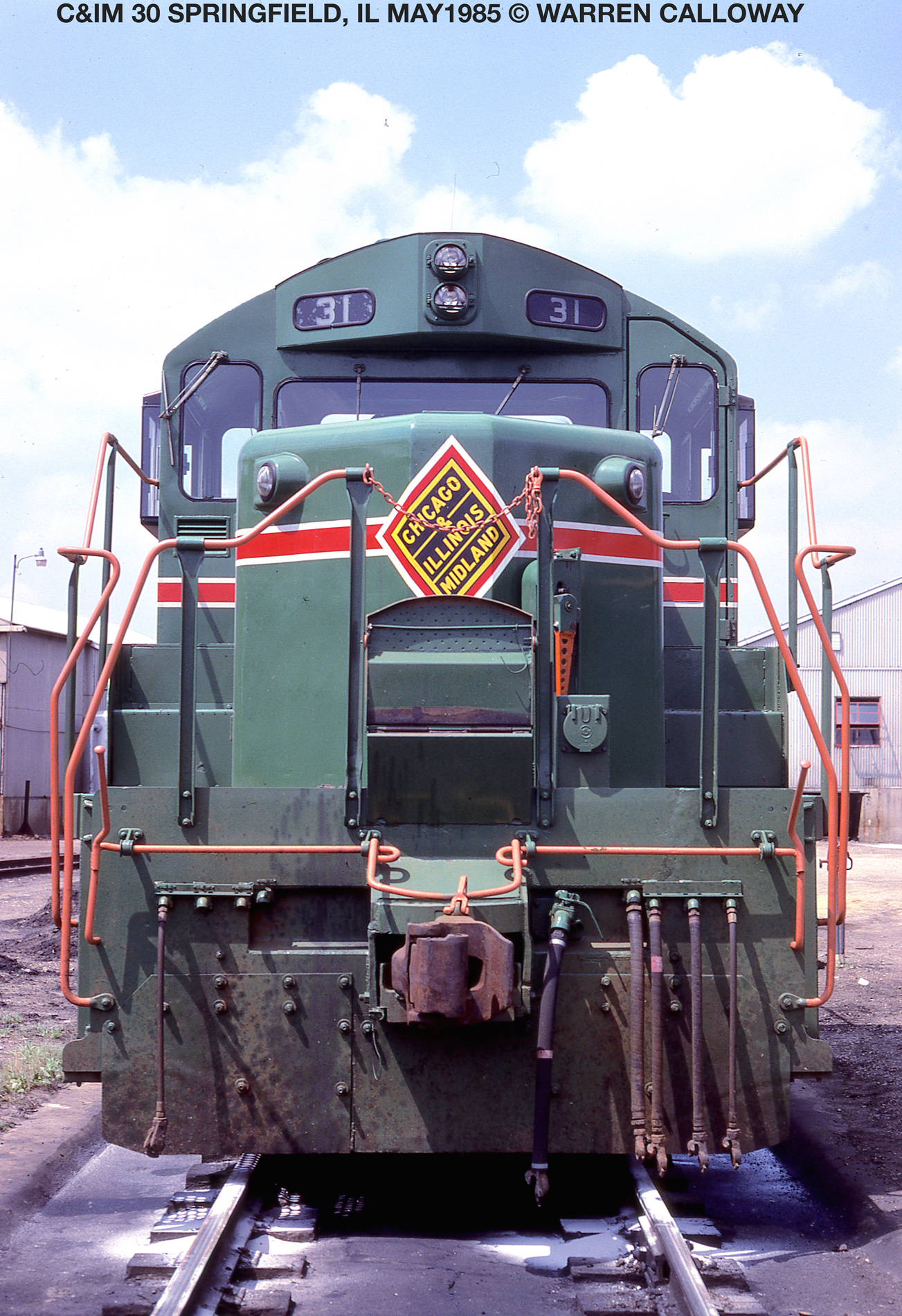 Chicago & Illinois Midland's other RS1325 at the Springfield terminal in May, 1985. Warren Calloway photo.

With the deregulation of 1980, Commonwealth Edison found it possible to have its coal shipments brought in more cheaply through contract with a larger Class I railroad.

As such, it no longer had an interest in the C&IM and decided to sell the asset. So, in late 1987 the railroad was sold to private investors, and operated for another ten years before, on February 9, 1996 it was acquired by the Genesee & Wyoming, which added it to its portfolio of railroads through the purchase.

Upon ownership, the G&W renamed the railroad as the Illinois and Midland Railroad, which still owns the short line today. 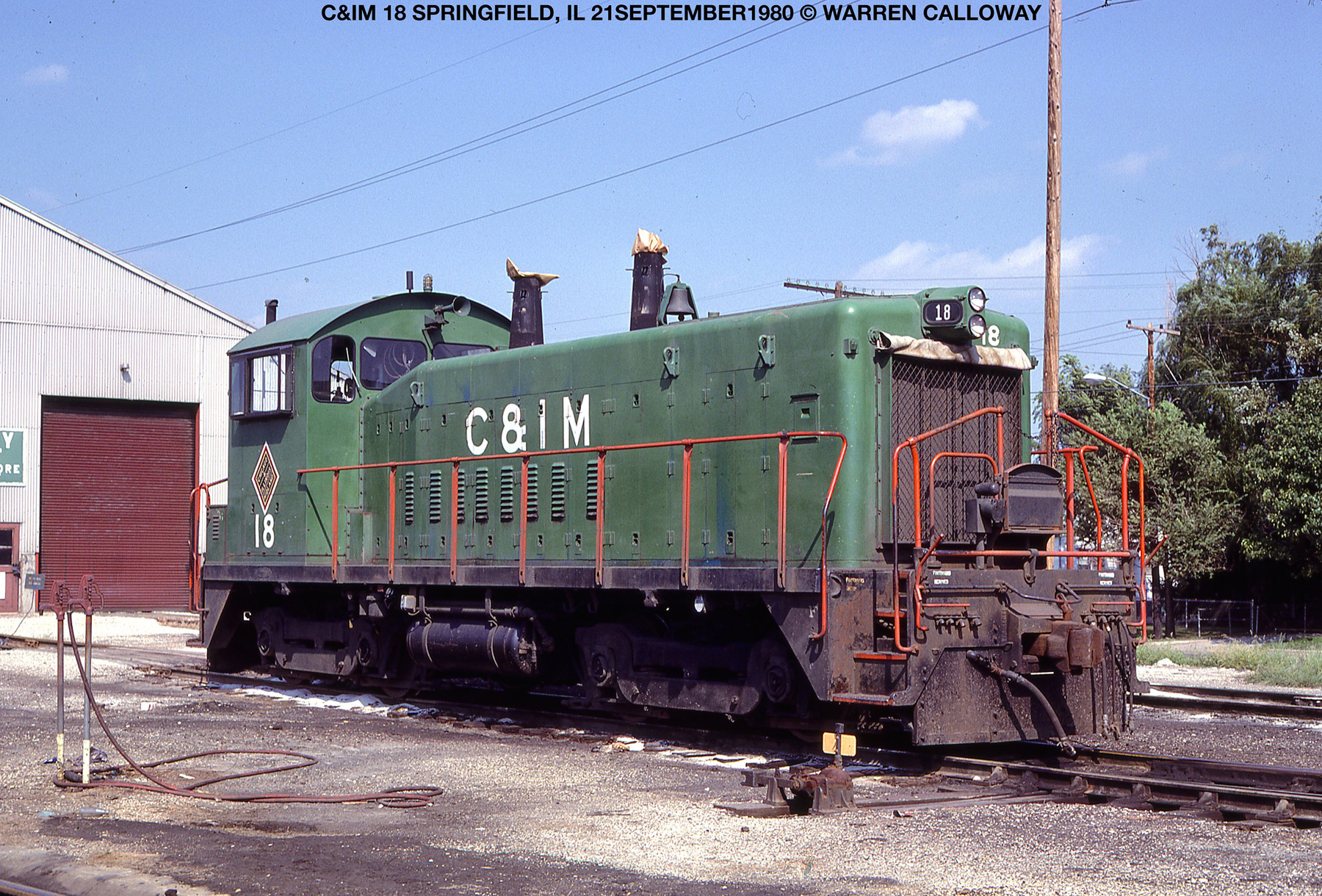 Chicago & Illinois Midland SW1200 #18 is tied down at the Springfield terminal on September 21, 1980. Warren Calloway photo.

And, with the Genesee's ownership of the Tazewell & Peoria Railroad the I&M now has a direct link into Peoria. Along with the railroad still hauling coal the I&M also moves food products, livestock feed, chemicals, ores, timber products, and waste.

The page also includes a full-sized system map of the railroad along with trackage rights and connecting railroads. Perhaps most interesting is the I&M's use of two, rare EMD-built RS1325 road-switchers, the only two ever produced.

To learn more about these unique diesels please click here.  For a complete roster of the railroad please view the table above.