Indiana railroads have a rich history dating back to the 1830s and historically has not only been home to the important city of Indianapolis but also a key through route to other important connections like St. Louis (the third busiest gateway behind Chicago and Kansas City) and Chicago.

Because the state was right next door to Illinois and near Chicago all of the major eastern trunk lines operated through it such as the B&O, PRR, New York Central, Erie, etc.

In this way, both states carry many similar characteristics.  While Indiana may have featured 40% less mileage than its western neighbor it featured multiple trunk lines and many secondary branch lines.

The state has since lost 50% of its rail mileage including the Erie/Erie-Lackawanna and Baltimore & Ohio main lines (St. Louis, severed as a through route).

Today, Indiana is home to four of the seven Class I railroads and has numerous short lines, museums and tourist railroads operating within its borders.

Of note, for your interest there are a number of pages (from this website) listed here covering railroad subjects related to the state of Indiana such as museums, historic interurbans, stations/depots, etc. 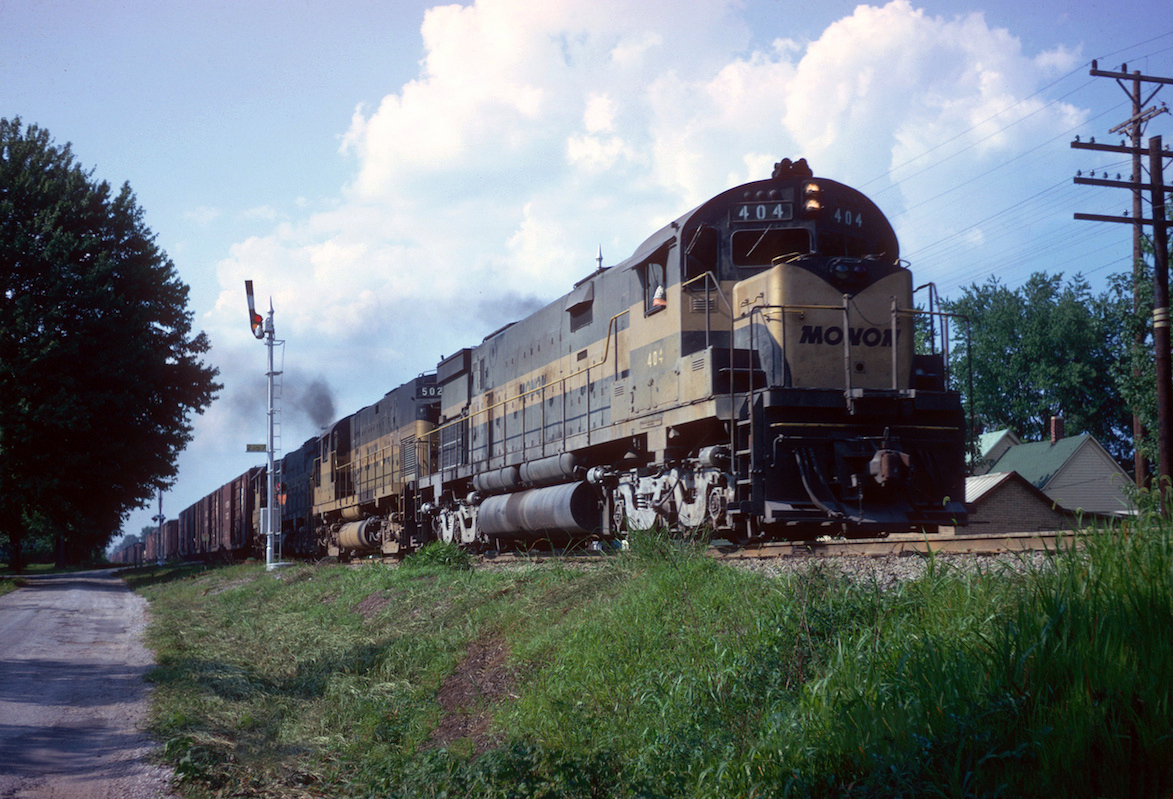 A Monon C628, along with a pair of C420's, hustle a long freight through Mitchell, Indiana on August 5, 1967. David Hawkins collection.

The railroad later became part of the Jeffersonville, Madison & Indianapolis Railroad in 1866. The JM&I, itself, would become part of the Pittsburgh, Cincinnati, Chicago & St. Louis, a Pennsylvania Railroad subsidiary.

In any event, much like Illinois, Indiana had virtually no railroads prior to 1840 but this quickly changed by 1880 when the state boasted over 4,000 miles of trackage.

As with Illinois, Indiana was one of the few states that had both east-west main lines accessing Chicago and Indianapolis as well as north-south key routes (Louisville & Nashville Railroad and Illinois Central). 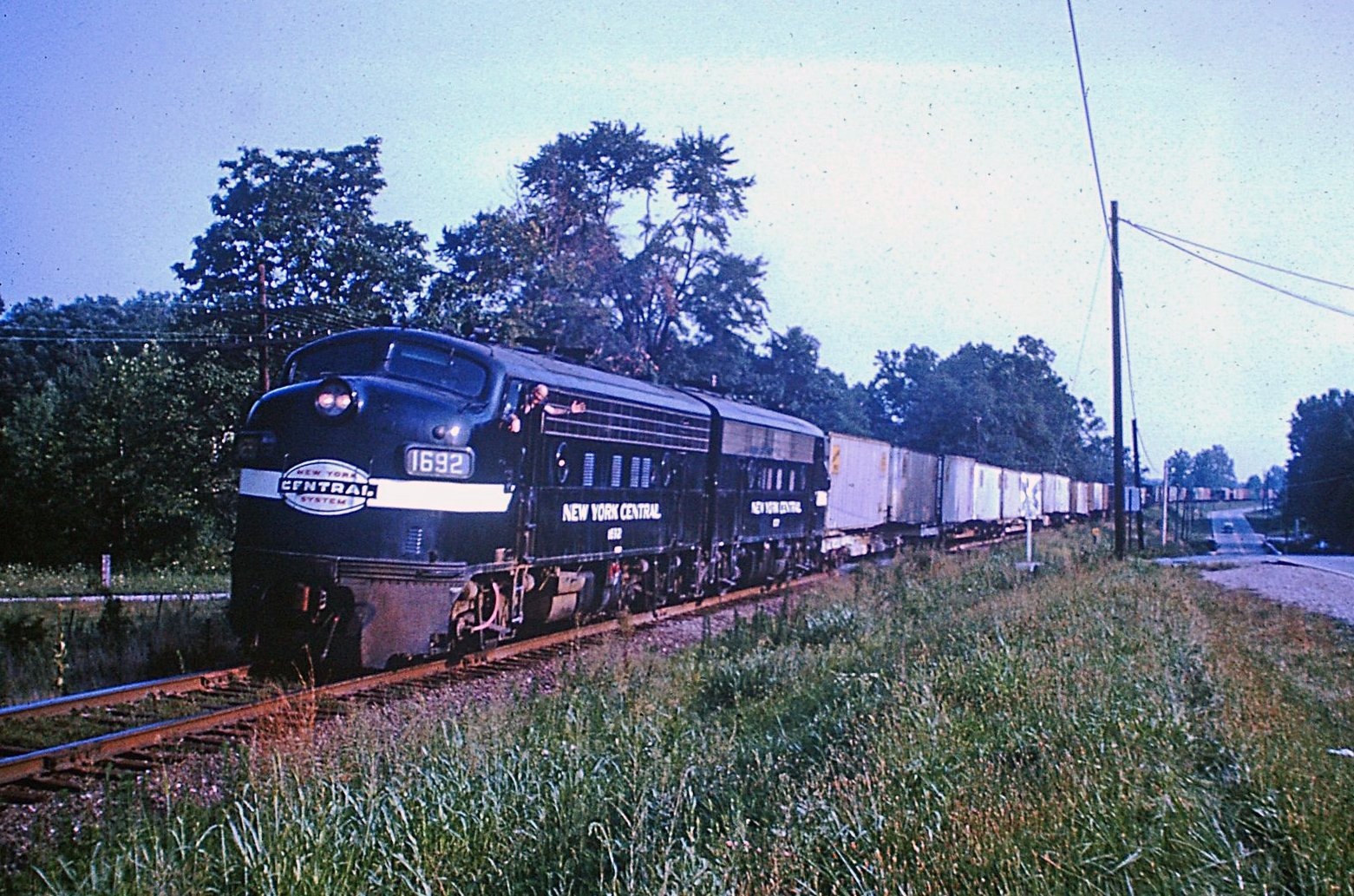 The rest is operated by short lines and regionals some of which include:

For a more in-depth look at Indiana's rail mileage throughout the years please refer to the chart below. As the chart depicts, the state was once home to nearly 7,500 miles of trackage. 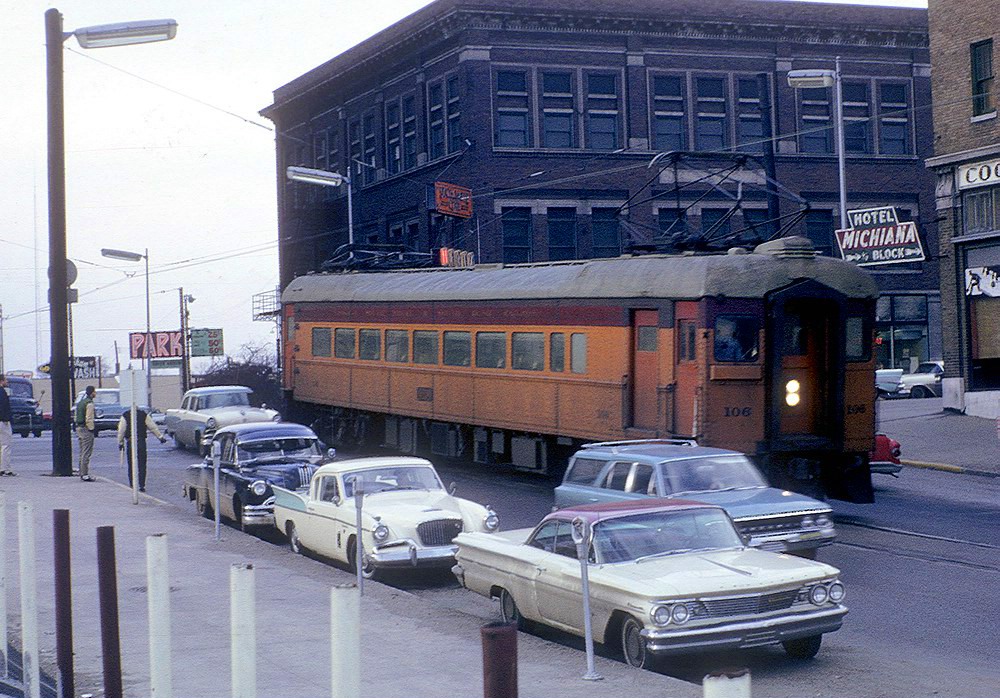 However, today that number has been cut down to just over 4,100 miles. With a decline of 45% since the 1920s this is about average considering most other state's have suffered similar loses. 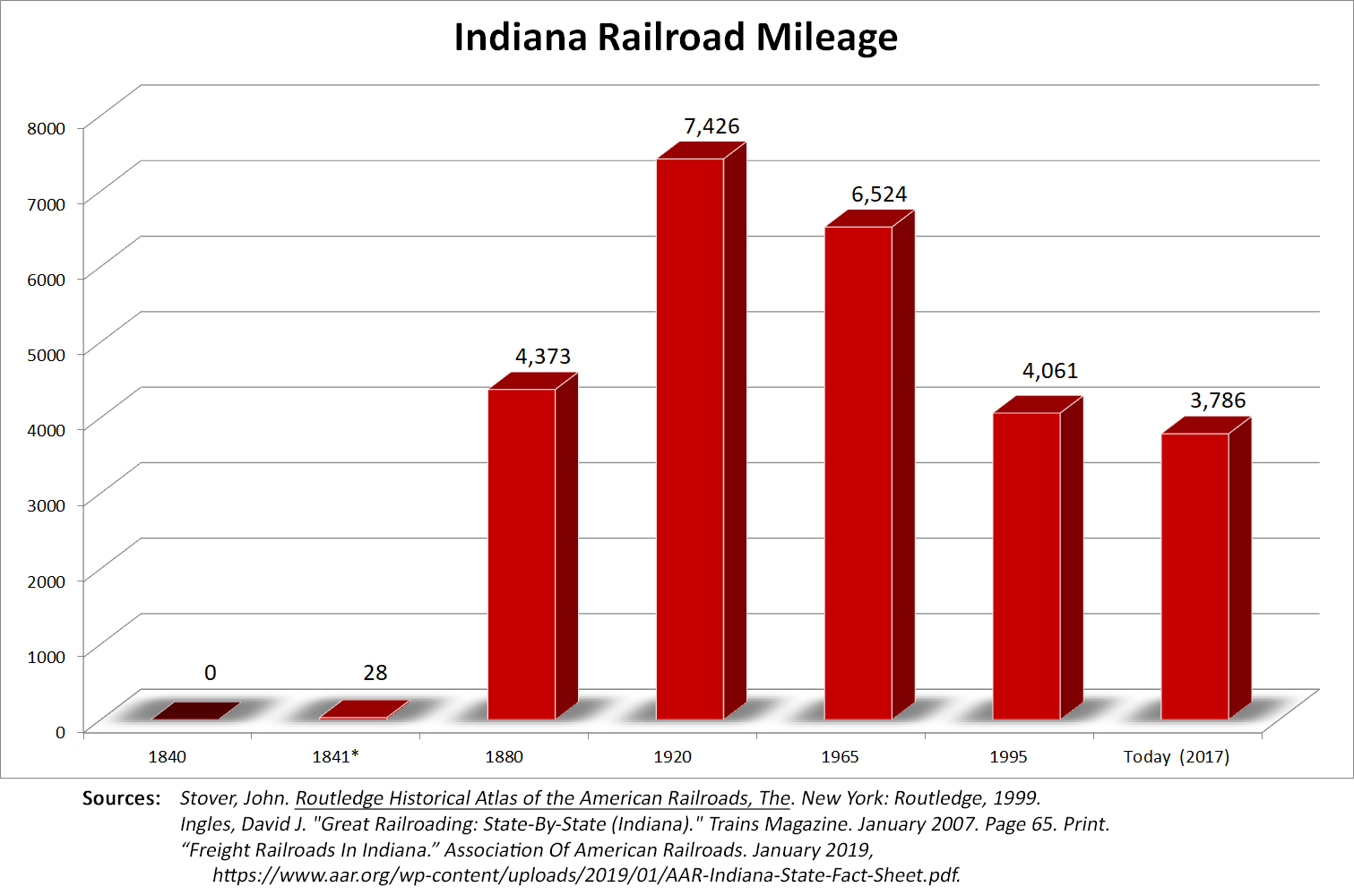 *  Indiana's first railroad put into service was the Madison, Indianapolis & Lafayette, chartered in 1832 to link its namesake cities.  Funding proved difficult but in 1841 a short 28-mile segment, from Madison to Queensville, had finally been completed, thanks, in part, to state intervention.   Finally, in 1847 the entire route was opened.  It later became part of the Pittsburgh, Cincinnati, Chicago & St. Louis, which later joined the Pennsylvania Railroad.

The Hoosier State's passenger trains are operated by Amtrak and include its tri-weekly Cardinal between Chicago and Washington, D.C. However, during the "Golden Years" several famous Eastern passenger trains passed through the state with important stops at Indianapolis. 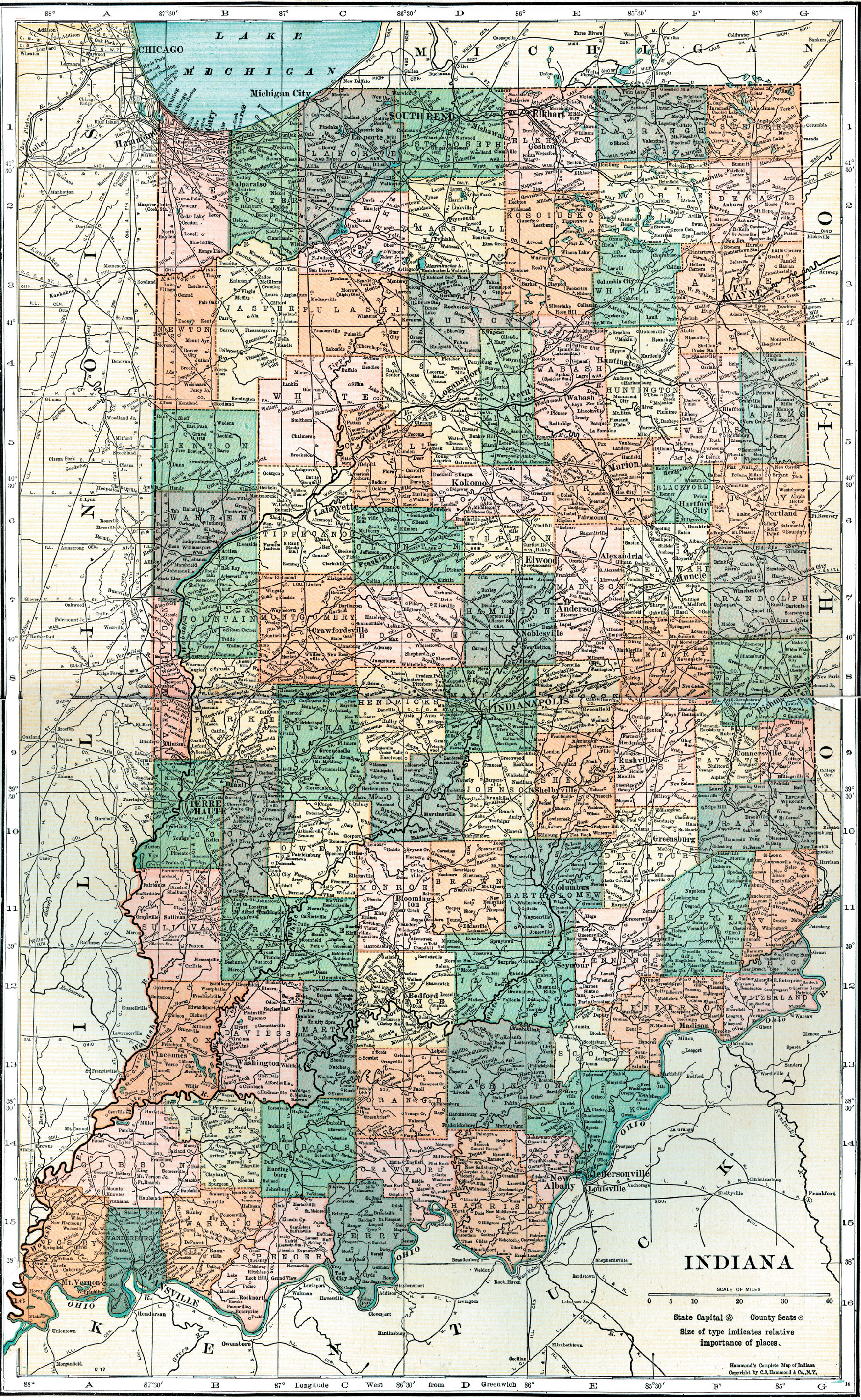 Like Illinois, Indiana was once blanketed with railroads.  It featured both eastern trunk lines bound for Chicago as well as southern roads, like the Southern Railway.

In addition, there were numerous secondary corridors and agricultural branch lines.  In general, Indiana was serviced by the New York Central, Baltimore & Ohio, and Pennsylvania while the Monon was also a major player in its home state.

Sadly, Indiana has witnessed more main line/through route abandonments than in other state.  The following corridors or railroads have been pulled up other the years:

To learn more about these streamliners, and others, please click here. Aside from Amtrak's Cardinal, the historic interurban, the South Shore Line still serves Hammond and South Bend (which also connects with Chicago).

Even today, you can catch South Shore trains operating on street trackage, like in Michigan City! 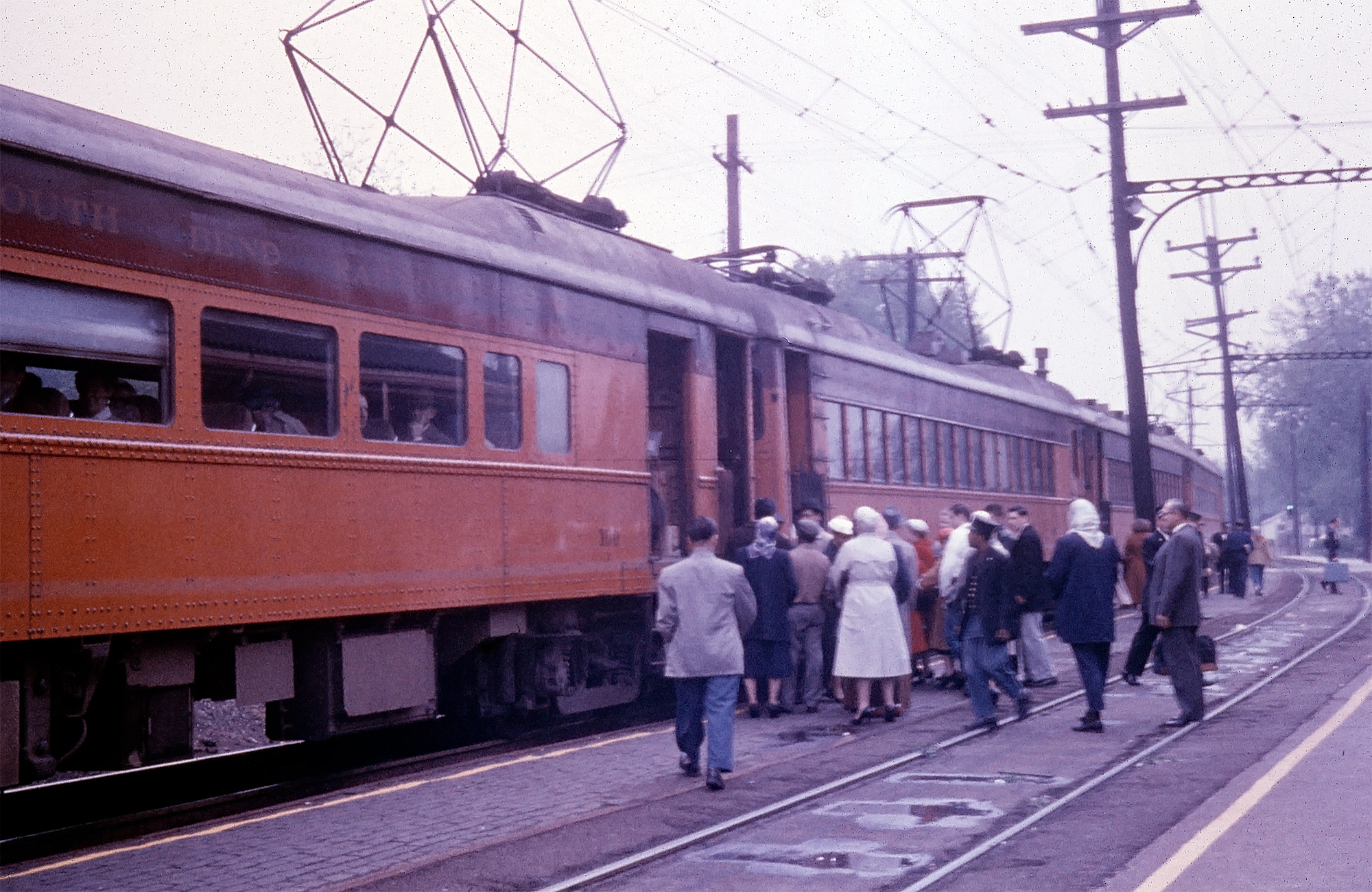 Indiana is also home to a number of railroad museums and tourist lines such as the:

In all, Indiana offers a wide variety of railroading from street running and interurbans to main line freight trains and Amtrak's Cardinal.

Even if you are a vacationer looking for something interesting to do the state offers a wide variety of railroad museums to choose from and visit.

In the end, you certainly should not be disappointed if you are heading to Indiana looking to catch railroads in action!