Despite the Interstate Railroad's small size the company thrived for nearly 90 years hauling black diamonds from mines located deep within the extreme western regions of Virginia.

While the IRR operated as a common-carrier system, moving general freight as well as passengers, its bread and butter was always Appalachian coal.  The railroad began as an idea from its parent company, which hoped the new line could handle coal to market.

As it turns out the Interstate became more successful than they could ever imagined.  It expanded rapidly across the western tip of Virginia, culminating with interchanges to four different Class I systems as rails wound their way through twisting hills and river valleys.

The IRR was eventually purchased by one of these partners, the Southern Railway, in the early 1960s.

In the passing years the Interstate was slowly integrated into its network. With the formation of Norfolk Southern the railroad's days were numbered and it disappeared in late 1985. 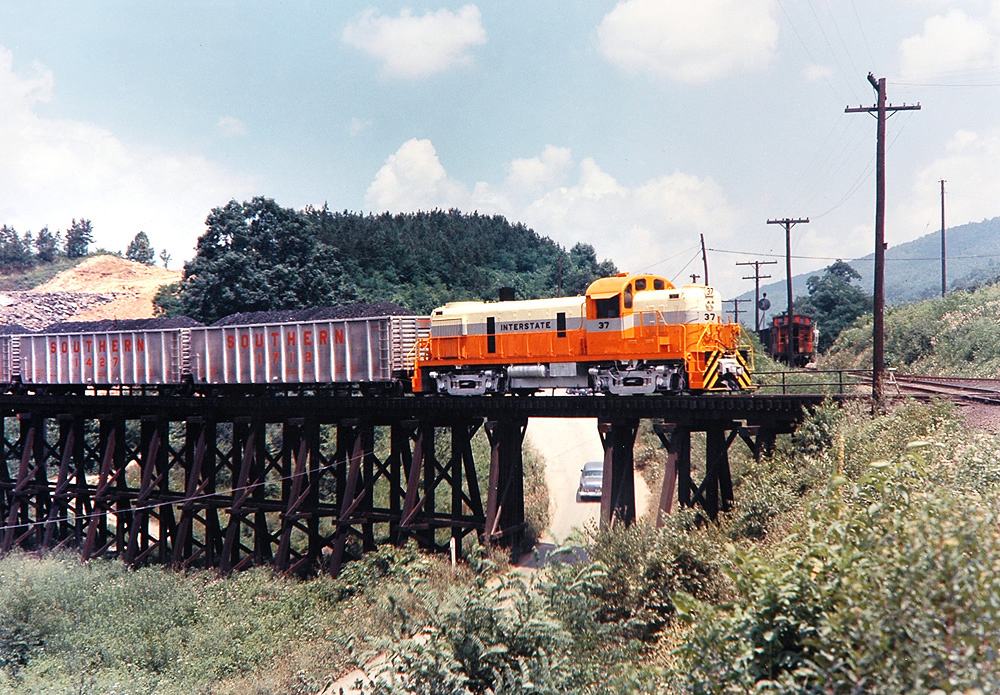 A wonderful color scene by company official Henry Stuart depicting Interstate RS3 #37 at the once busy Dorchester Jct. in Norton, Virginia during May of 1960. Today, the branch is gone. Henry Stuart photo/Ron Flanary collection.

The history of the Interstate has not been widely covered over the years.  There have been few articles published and the only books highlighting the company were written by Ed Wolfe.

If you can find copies of these titles they provide the most thorough, in-depth history available in print.  The name Interstate Railroad is a fascinating one, considering it never actually operated rails outside of Virginia.

It was created in 1896 by the Virginia Coal & Iron Company to haul soft, bituminous coal from mines located near Stonega (operated by VC&I subsidiary, Stonega Coke & Coal Company) to Appalachia.

Here, a connection was made with the Louisville & Nashville and Virginia & Southwestern Railway (later, Southern Railway). The little IRR then was only about 6 miles in length.

It constructed its primary yards and headquarters at Andover, just north of Appalachia, a small town that long remained its hub of operations.

During these early years just a single locomotive was needed in addition to a few freight cars.  Its meager passenger services were provided with one coach, a baggage, and combine.

At the turn of the 20th century the Interstate began expanding to the east. Its main line snaked along the Guest River where it met up with the Norfolk & Western at Norton in 1909, establishing a new interchange there.

From its original line around Andover two additional branches were built; one headed towards Roda while another struck out for Derby.

The IRR also pushed its Stonega Branch north to Wentz. With three lines now radiating away from its headquarters, Andover became an even more important location for inbound mine runs.

In 1919 it acquired the 35-mile Roaring Fork Railroad.  This little coal line paralleled the IRR from Kent Junction to Norton and operated coal branches northward to Roaring Fork with another reaching Pardee.

It provided an additional interchange point when a 17-mile extension (the so-called Guest River Extension) opened from Norton to the Carolina, Clinchfield & Ohio (Clinchfield Railroad) at Miller Yard. The CC&O itself was a powerful but compact coal road, operating a 277-mile spine from Elkhorn City, Kentucky to Spartanburg, South Carolina. 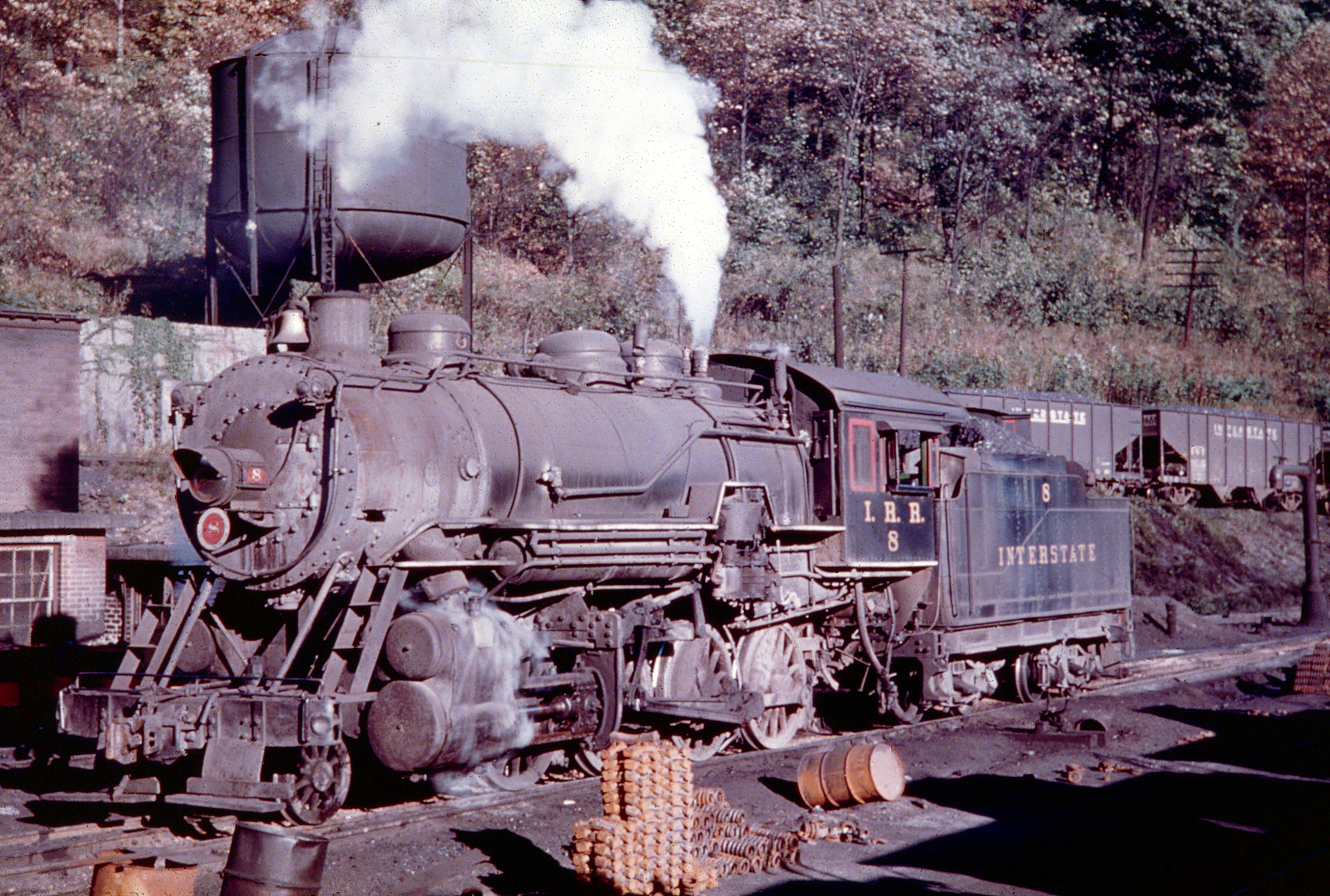 Miller was situated along the northern end of its network, south of Dante, Virginia.  The Guest River Extension began construction in 1920 and was completed three years later.

At around the same time it finished an eight-mile branch just east of Norton which ran north to tap more coal mines at Glamorgan, Critical Fork, and Dixiana.

This constituted the bulk of Interstate's system.  It was well-engineered railroad despite being tucked away along a river valley within the southern Appalachian Mountains; grades were no greater than 2.5% and curves no tighter than 18 degrees.

Because of the scattered nature of its network a three-story office building opened in Andover in 1921, which greatly improved operations.

This building centralized the superintendent, dispatcher, and other executives together under one roof (it is unlikely the railroad's parent company ever expected it to become so successful!).  I

n a related matter, with longer and heavier coal trains the railroad needed more power; its fleet of 2-8-0 Consolidations simply could no longer handle the demand.

In 1923 it acquired two massive new 2-8-8-2 Mallets from the American Locomotive Company (Alco); #20-21.  These beasts could produce 101,465 pounds of tractive effort and were beloved by management.

Overall, the five compounds were easily the largest the railroad ever operated and remained in regular service until the early 1950s when diesels took over.

Alco was always a favorite and the Interstate stuck with the builder for new road-switchers, receiving its first RS3 in 1952.  This unit was former demonstrator #1607 clad in blue paint.

While it was later adorned into Interstate's cream, orange, and grey "Orangesicle" livery and renumbered 37 it was always referred to by crews as the "Blue Goose."  In all, the IRR would roster ten RS3's, #30-39.

The final examples were received by the fall of 1953. The railroad did offer passenger services during its early years although the remote nature of its location saw these trains disappear before 1930.

During peak years it dispatched two passenger trains per day, usually handled by its lone 4-4-2 Atlantic, #9 (when needed a 2-8-0 assisted). A typical consist included three wooden cars; a combine, baggage, and a standard coach. 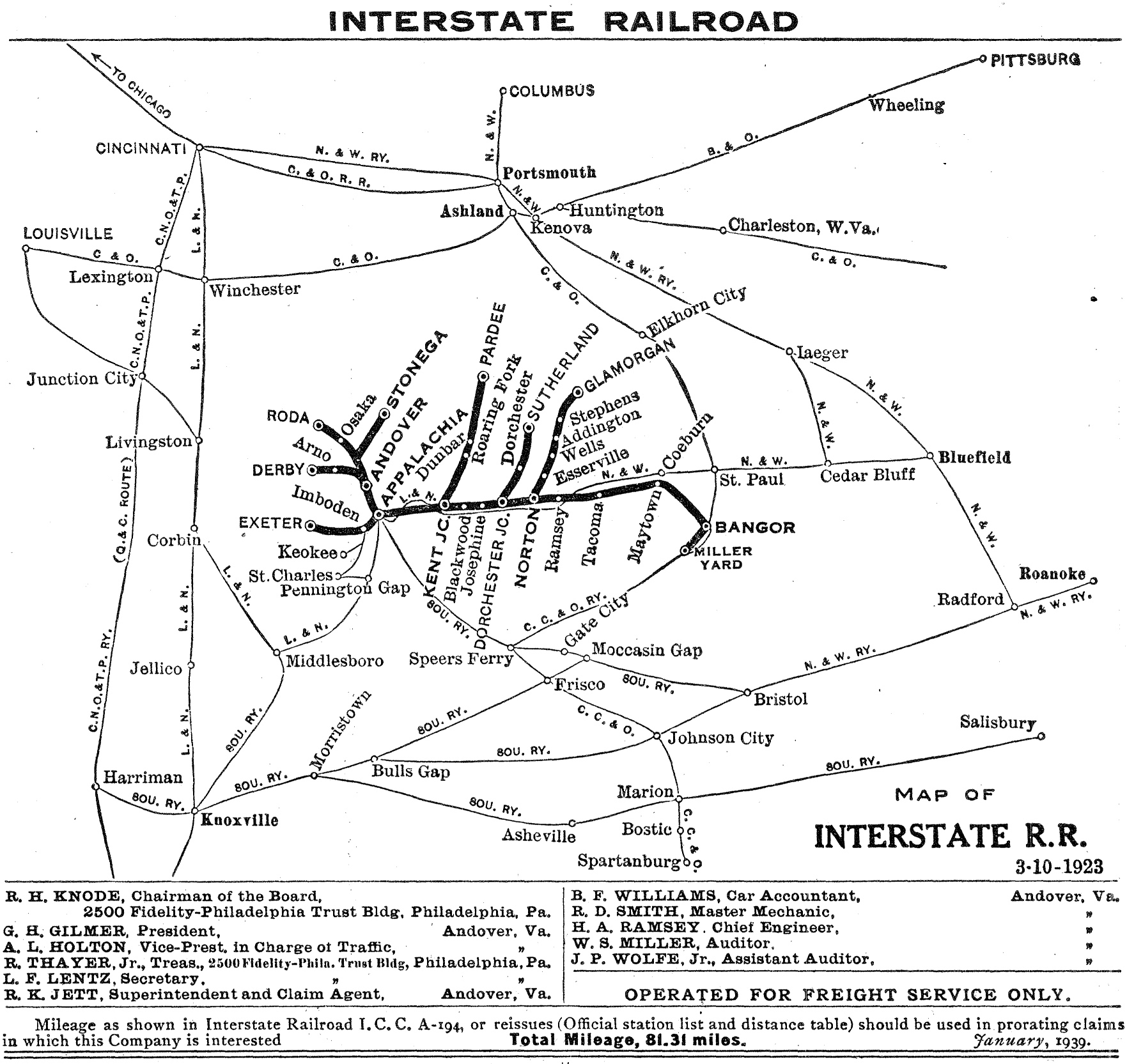 An official, 1939 system map of the Interstate Railroad. Author's collection.

Sometimes, the railroad would even offer an excursion if there was enough interest.  In any event, by the late 1920s there was no longer need for two runs each day and service was reduced to a single train.

Interestingly, even by 1928 in an era predating the Great Depression and often regarded as the industry's "Golden Age" passenger service was rather inconsequential on the Interstate.  With so little demand the Interstate Commerce Commission granted permission to cease all service in 1929.

The very last train to run across its network did so in 1942 when Norfolk & Western's #41 and #42 detoured on the IRR due to a washout along the Radford Division. After World War II its hopper fleet grew by more than 600 to serve the company's ten coal docks and nine tipples.

However, these cars were becoming outdated by the late 1950s and management felt their resources were not strong enough to continue purchasing needed equipment to meet demand.

So, the IRR was put up for sale with both the L&N and Southern showing interest. It was the latter that came out with the highest bid, taking over the Interstate in October, 1960.

(A big thanks to H. Reid's article, "Whistle In The Valley" from the August, 1953 issue of Trains as a primary reference for this page.)

Until 1965 the railroad remained relatively unchanged.  That year the Southern shifted the RS3's to other areas across its network and closed the Appalachia Yard.

Following the creation of Norfolk Southern during 1982 the IRR disappeared officially on October 31, 1985 as the new company began consolidating its subsidiaries.

In March of 2012 NS announced that it would be painting twenty new diesel locomotives, models manufactured by both General Electric (ES44AC) and Electro-Motive (SD70ACe) into authentic, predecessor liveries as part of a nod to its heritage.

This fleet was unveiled to the public at the North Carolina Transportation Museum in Spencer.  Surprisingly, despite the IRR being one of the smallest aspects of the entire NS network it was one of the predecessors chosen for this honor.

Today, ES44AC #8105 proudly wears the very same "Orangecicle" livery as that worn by RS3's during the 1950s.  The big road-switcher can be seen roaming the NS system.