The Norfolk & Western's experimental Jawn Henry was the last in a short series of steam turbine locomotives tested by three different railroads between the 1930s and 1950s including the Pennsylvania and Chesapeake & Ohio.

The hope was to find a way to continue utilizing steam as main line power, especially for the N&W a road which had a long-standing policy of using strictly steam locomotives.  Unfortunately, as all three railroads came to learn the steam turbine was simply too complicated and unreliable to effectively compete against the efficient diesel.

The N&W tested the Jawn Henry during a three year period in the 1950s but even the master steam builders of Roanoke could not work out the locomotive's problems.

It was a similar situation at the nearby Chesapeake & Ohio which attempted to design a steam turbine for use on its new streamliner, the Chessie.

The idea involved more than just the nostalgia of preserving steam as main line power; for the N&W and C&O the railroads owned massive coal reserves, providing them a nearly free source of fuel for the locomotives.  Alas, neither could make it work.   The N&W finally gave in and scrapped the Henry, purchasing its first diesel locomotives in the mid-1950s. 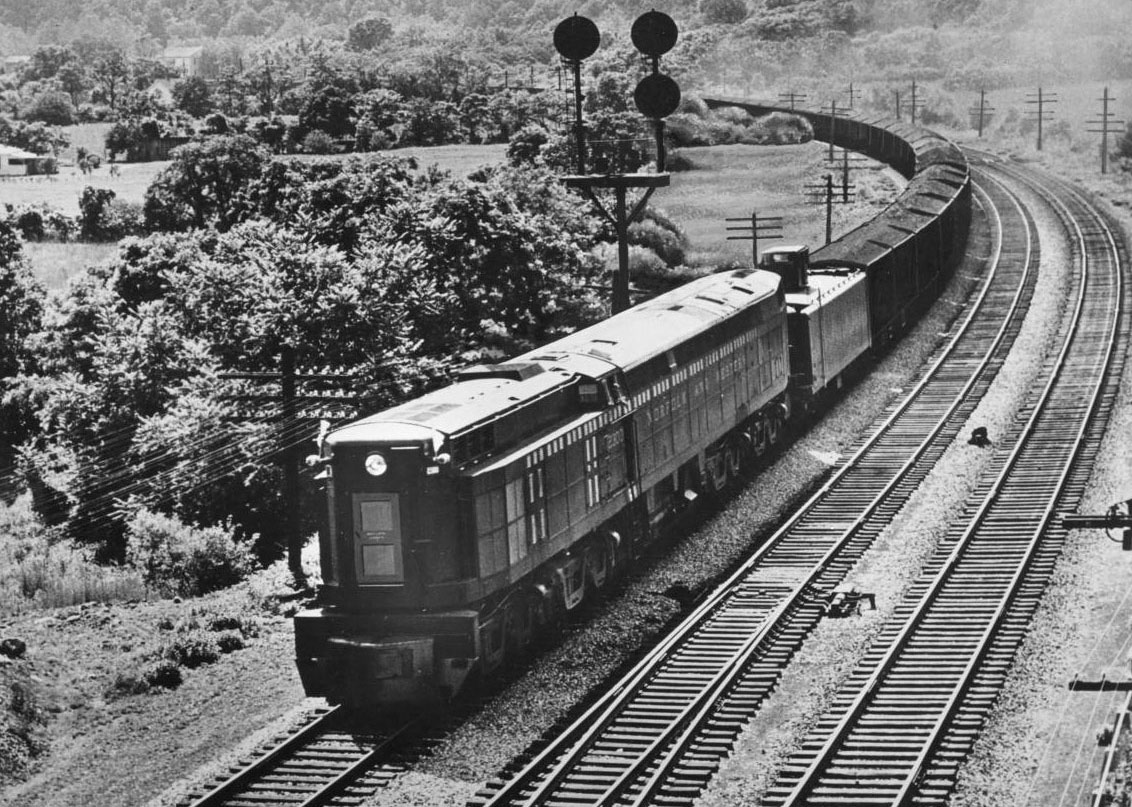 In this Norfolk & Western publicity photo the "Jawn Henry" handles an eastbound coal drag near Christiansburg, Virginia in the summer of 1955.

The history of steam turbine technology used in railroad applications begins in 1938 when the Union Pacific had two units built by General Electric.  The idea was to see if the locomotive could effectively compete against the passenger diesel, which had debuted just a few years earlier by Electro-Motive.

This version even looked like a diesel and carried a 2-C+C-2 wheel arrangement.  While the units toured the country they only operated on the UP for six months before being returned to GE and were subsequently scrapped.  In 1944 the Pennsylvania Railroad began testing its own version; the only design that actually looked like a steam locomotive it was listed as Class S2.

Overall, the #6200 performed relatively well on the PRR but consumed an exceptional amount of fuel and water.  The unit was scrapped before 1950. 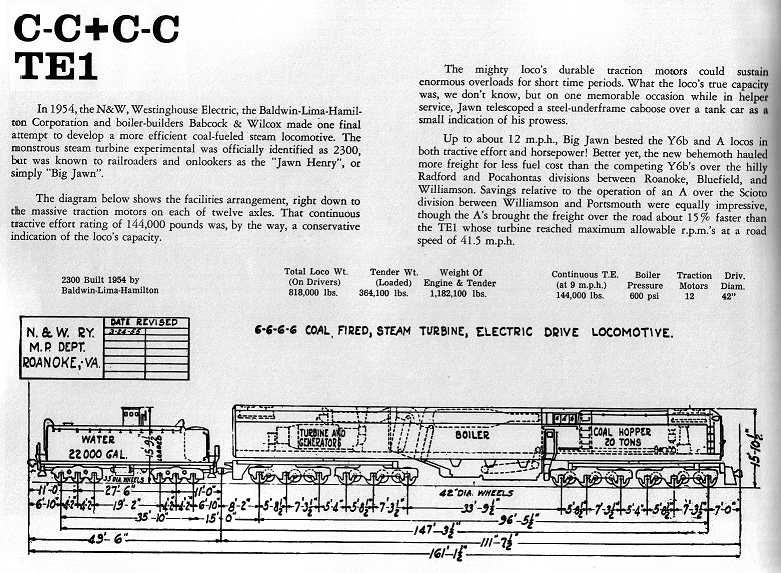 During 1947 the Chesapeake & Ohio tested its own version that carried a 2-C1-2-C1-B and looked very similar to what the N&W would eventually put into service.  The C&O's turbine was also meant to compete against the diesel but proved too heavy, long, and complicated forcing the railroad to give up on the idea within a year.

Finally, not wanting to give in on the growing dominance of the diesel the legendary steam builders of the Norfolk & Western decided to test out their own version of the steam turbine in 1954.  The railroad had a long running policy of operating strictly steam, in part due to the cheap and abundant coal regions it served.

At the time the N&W tested its turbine it was still using steam in regular service, long after virtually every other Class I had either fully dieselized or was very close to doing so.  These late era wheel arrangements included primarily Roanoke's own designs such as the Class Y6 2-8-8-2s, Class A 2-6-6-4s, and J Class 4-8-4s (all three were some of the most efficient and powerful steamers ever built). 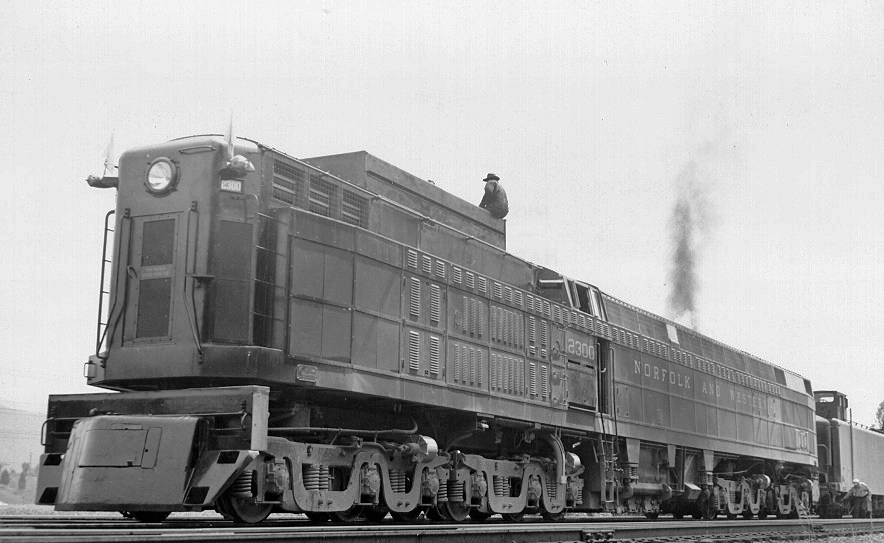 The N&W hoped to combine the electric drive of the diesel with the proven power of steam, and so placed an order in 1954 to Baldwin-Lima-Hamilton and marine boilermaker Babcock & Wilcox (which supplied a marine-type water tube boiler) to design a 4,500/5,000 horsepower steam turbine locomotive.

What the builders came up with was a C-C-C-C design (which sat on traditional trucks) that looked similar to the C&O design but weighed less (818,000 pounds) and was somewhat shorter.

The locomotive, listed as Class TE1 and numbered 2300, could produce 600 psi (more than twice the pressure of a standard steam locomotive), and was given the designation Jawn Henry by crewmen (the famous African American worker who defeated a steam drill and died during his efforts), a name which stuck.

It also offered superior fuel savings over the Class Y up to operations of 12 mph and Baldwin believed that in standard road service the Jawn Henry would offer a savings of 50%.  Unfortunately, this wasn't quite the case.

Above 12 mph and in relatively flat country the Class As, for instance, could handle trains about 15% faster than the Henry due to its low drawbar rating of 4,o00 horsepower.

Due to these issues and others, the N&W quickly learned that the Jawn Henry could not be trusted on the head-end of merchandise freights or coal drags and thus was relegated to helper service most of the time along the main line between Roanoke, Virginia and Bluefield, West Virginia.

For railfans hoping to see the steam turbine effectively compete against the diesel the locomotive was not quite what they expected; the Jawn Henry did not offer the thrilling and thunderous performance of a Class A or Y, for instance.  Instead, it produced a "whoosh!" sound, not unlike a jet engine of today.

Despite the N&W's attempts it was becoming obvious that the diesel was the future; parts for steam locomotives were becoming harder (and more expensive) to purchase and the associated costs of personnel and facilities made it hard for the company to justify continuing is policy of steam.

From that point the railroad continued to order diesels throughout the '50s and into the 1960s.  For the Jawn Henry the N&W rostered the locomotive for a few more years before she was sent to the scrapper on January 4, 1958.

Today, the Henry and the other turbines built during the early diesel era are only a memory, an interesting time in the industry when steam tried to hang on one last time.