With the streamliner craze at a fever pitch during the late 1930s and early 1940s many railroads were launching new trains as fast as the equipment was ready for service.

The Pennsylvania inaugurated the New York - St. Louis Jeffersonian just prior to World War II after realizing how successful a premier, all-coach service could be with the christening of the New York - Chicago Trail Blazer a few years earlier.

The new train was given the very best of equipment the PRR had available and while it may have tailored to those on a budget it certainly provided prestigious accommodations.  Unfortunately, the decline in ridership after the war meant a train like the Jeffersonian was unlikely to survive.  It was canceled during the early 1950s in an effort to cut growing losses.

Encouraged by the success of the Trail Blazer, which had debuted on July 28, 1939, the PRR felt a similar deluxe, all-coach train on its New York - St. Louis corridor would be just as successful.  And they were correct, at least for about a decade.

According to Mike Schafer and Joe Welsh's book, "Streamliners: History Of A Railroad Icon," the Jeffersonian was introduced to the public on April 27, 1941.  The train was the final addition to its "Fleet Of Modernism" prior to the onset of World War II.

As with the Trail Blazer, the Jeffersonian utilized a consist of rebuilt, modernized heavyweight cars (sporting wide windows for maximum viewing) which had been overhauled at the famous Altoona Shops.  The work was so good the equipment appeared virtually like new lightweights being produced by the notable car builders of the period; Pullman, Budd, and American Car & Foundry. 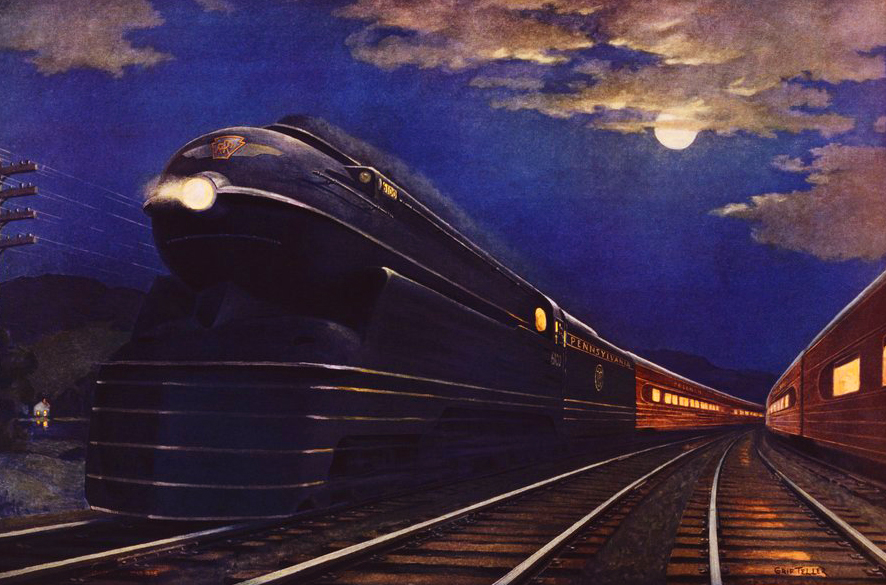 The Jeffersonian was heavily promoted by the Pennsy and featured in many advertisements, especially after war when new equipment and diesels began arriving on the property.

One particular, all-color piece from 1948 highlighted the new, revolutionary "Recreation Car."  The social center-piece of the train, it offered passengers a wide range of entertainment.  According to the ad:

"A dramatic highlight in Pennsylvania Railroad's new equipment program, this colorful new recreation car provides amusement and entertainment for all ages.  A luxurious game and reading lounge...a children's playroom...a sunken buffet lounge...miniature movie theatre - pleasure with variety.  Be among the first to enjoy it!  Reserve a seat on The Jeffersonian on your next trip!"

According to Mike Schafer and Brian Solomon's book, "The Pennsylvania Railroad," the train was targeted at travelers interested in a less-expensive alternative to flagship Spirit Of St. Louis, yet which provided better than the basic services offered.

A testament to the Jeffersonian's once elite status, during the steam era it was equipped with a beautiful, streamlined Class K4s Pacific; equipment few trains ever received.

As the railroad acquired large batches of new diesels after the war the train was led by everything from Alco's beautiful PA model to Electro-Motive's classic E series units.  The Jeffersonian was listed on PRR's timetable as train #65, westbound, and #64, eastbound with a schedule of just under 20 hours.

Leaving New York around dinner it would arrive in St. Louis the next day after lunch while its counterpart departed the Gateway City at 1 PM and returned to the Big Apple the following morning during the brunch hour. 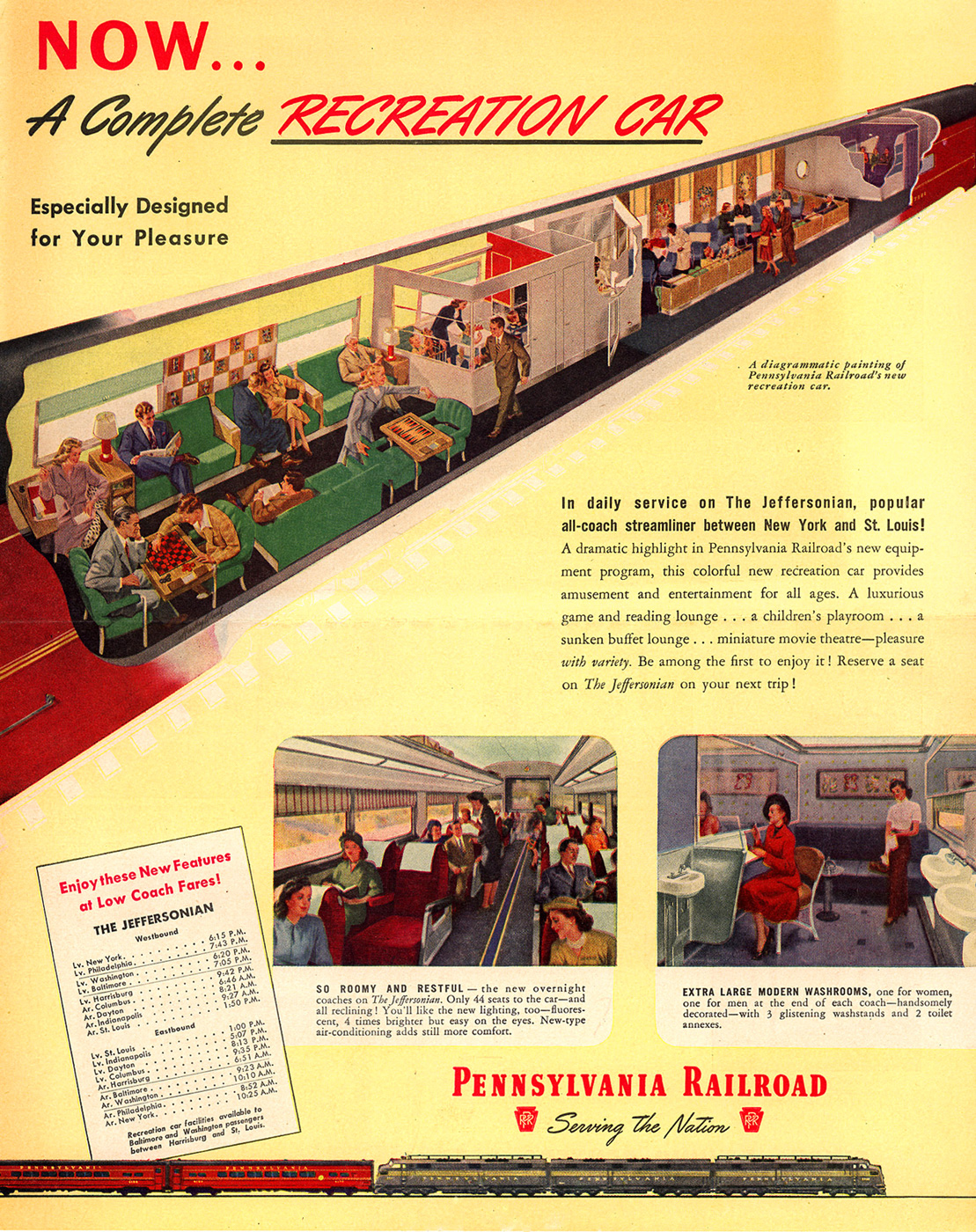 According to Harry Stegmaier, Jr.'s book, "Pennsylvania Railroad: Passenger Trains, Consists & Cars - 1952 Volume I," the Jeffersonian's usual consist at that time included many reclining seat coaches, a few which ran through via Washington-St. Louis and Washington-Indianapolis (all-lightweight by then, Class P85BR cars), a diner, observation-buffet-lounge, dormitory, and handful of head-end RPO/mail/express cars.

Unfortunately, despite new equipment and strong advertising throughout the 1940s the Jeffersonian was fast losing ridership by the postwar years.  The public left the rails for the freedom of their own automobiles or the speed of long-distance air travel, able to whisk travelers between two long-distance points in only a few hours that required a half-day or more by train.

(The below Jeffersonian timetable is dated effective circa 1952.) 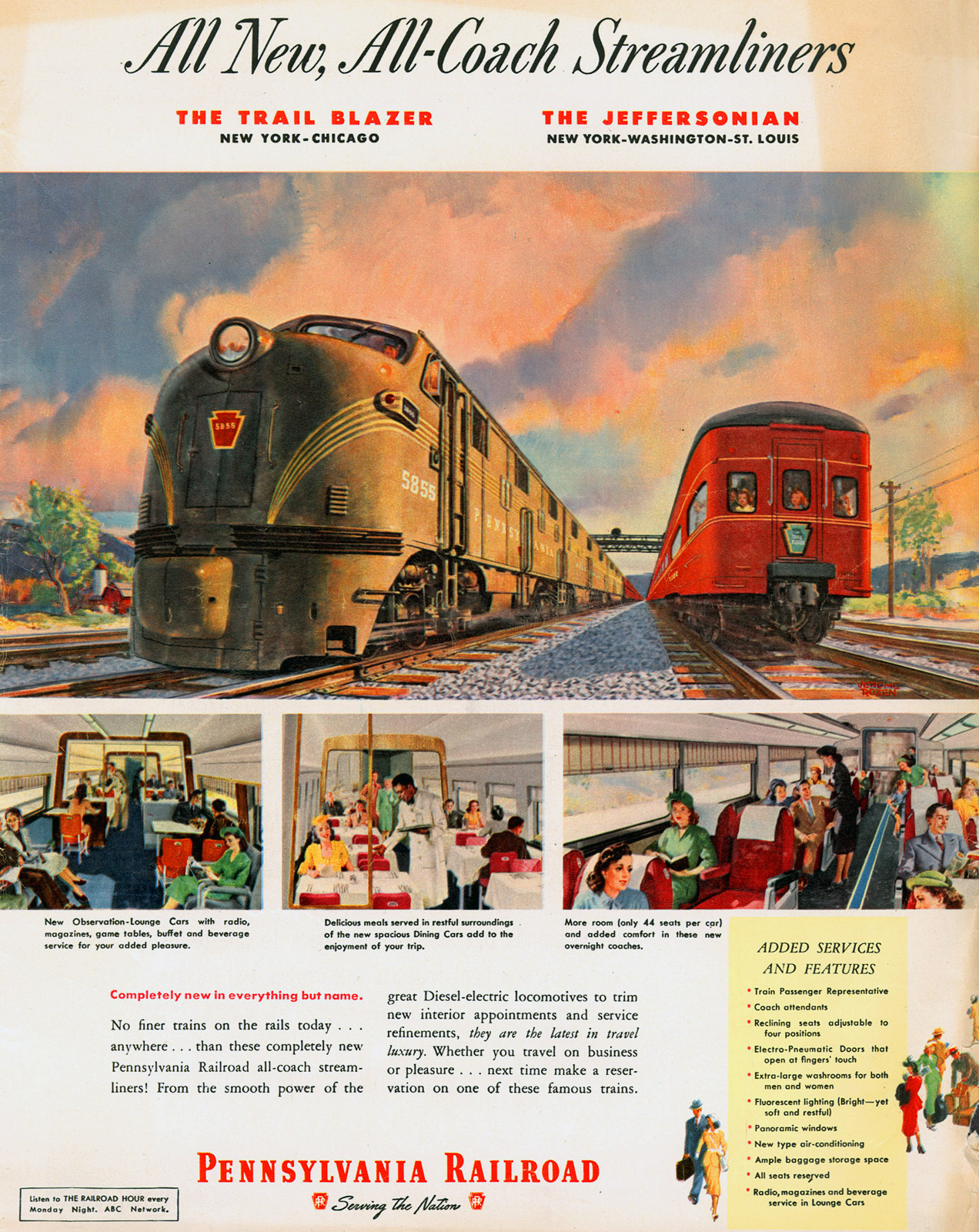 During the early 1950s Pennsylvania management understood they must implement cutbacks to their passenger service, which had lost money every year since 1946.  The all-coach Jeffersonian was one such train deemed superfluous.

As Mr. Stegmaier notes the railroad realized that its Indianapolis coaches and sleepers could be handled by the Indianapolis Limited while the remaining traffic to St. Louis was simply picked up by the Spirit Of The St. Louis.  Sadly, once such a heralded train would not live to see the mid-1950s.  On April 25, 1953 the Jeffersonian quietly disappeared from the PRR's timetable.