However, the electric locomotives ran near flawlessly during their service life that spanned three decades and they became the most revered motors ever operated on the Milwaukee Road.

The Little Joes were used in regular service from the early 1950s until the Milwaukee Road’s western electrified operations over its famous Pacific Extension were shutdown in 1974.

Early on the 2-D+D-2 electrics pulled both passenger and freight trains although this ended in early 1961 when the railroad stopped running its transcontinental Olympian Hiawatha to Puget Sound.

Thankfully, one Little Joe was saved from the scrapper’s torch and now sits on display in Deer Lodge, Montana with other preserved equipment. 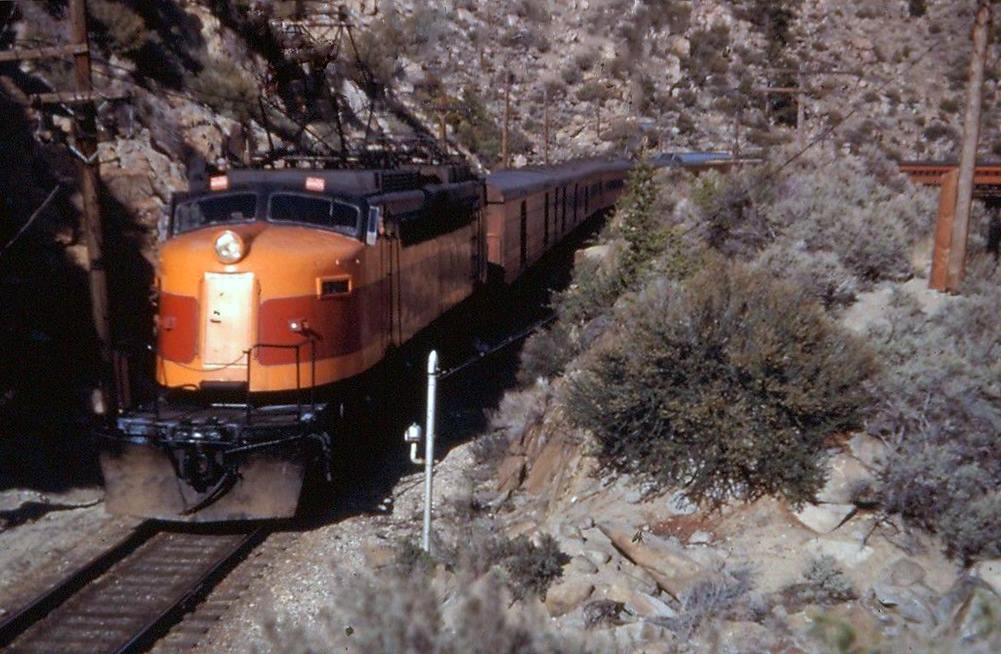 The unique "Little Joe" electric locomotives were built by General Electric in 1946 to fill an order placed by the Soviet Railways to operate on a 3,300 volt, DC system.

However, upon the order being completed relations had broken down between the United States and Russia (thus plunging us into the Cold War) and the locomotives had no place to go, with all 20 sitting at GE’s Erie, Pennsylvania plant awaiting purchase.

From a technical standpoint these motors carried a 2-D+D-2 wheel arrangement, were equipped with eight GE 750 motors, and operated on a 3,000 volt DC system (perfect for the Milwaukee Road) with a continuous rating of 5,500 horsepower!

While geared rather low with a maximum speed of just 68 mph they produced 75,700 pounds of tractive effort and would prove to be perfect in stiff, mountainous territory. 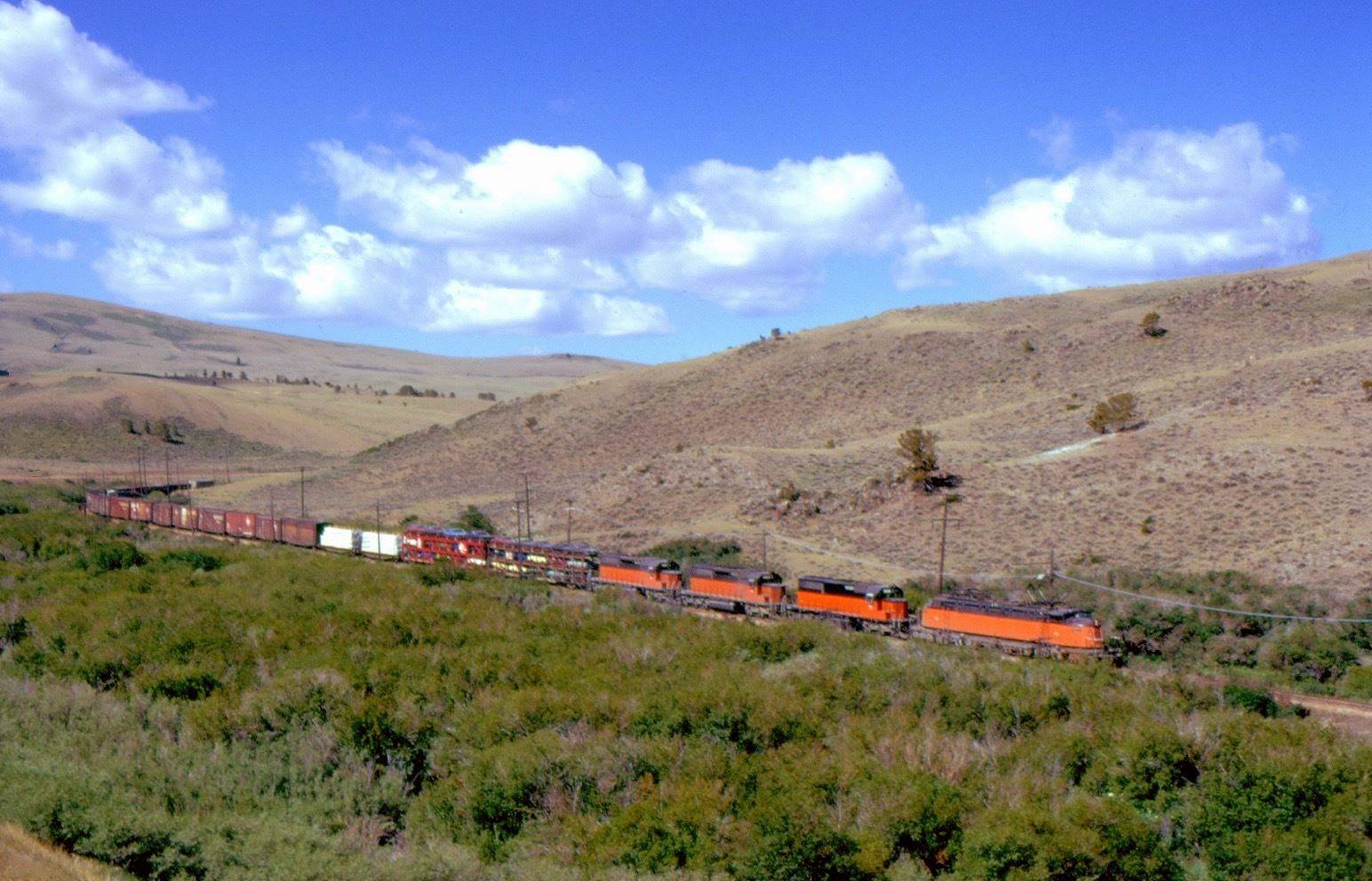 Milwaukee Road "Little Joe" E-77 hustles a manifest under the wires of the Rocky Mountain Division near Lennep, Montana during July of 1973. Photographer unknown.

Needing to sell the electric locomotives, GE offered to test one on the Milwaukee Road in the late 1940s, which interestingly had to be re-gauged to 4 feet 8 ½ inches from the five foot specifications for Soviet Railways.

Of the twenty built, the Milwaukee Road would go on to purchase 12 in 1950 with three picked up by the commuter line Chicago, South Shore & South Bend Railroad and the other five sold to Brazilian railroad, Paulista Railway.

After arrival on the CMStP&P the railroad quickly set to putting them into service.

Initially two were singled out for passenger service and designated class EP-4 (they carried the Milwaukee Road’s plush Olympian Hiawatha passenger train, which operated between Seattle and Chicago).

The rest were geared for freight operations and designated class EF-4s (after the Milwaukee Road ended passenger service to Seattle in 1961 the two motors designated for such were reclassified to EF-4s as well). 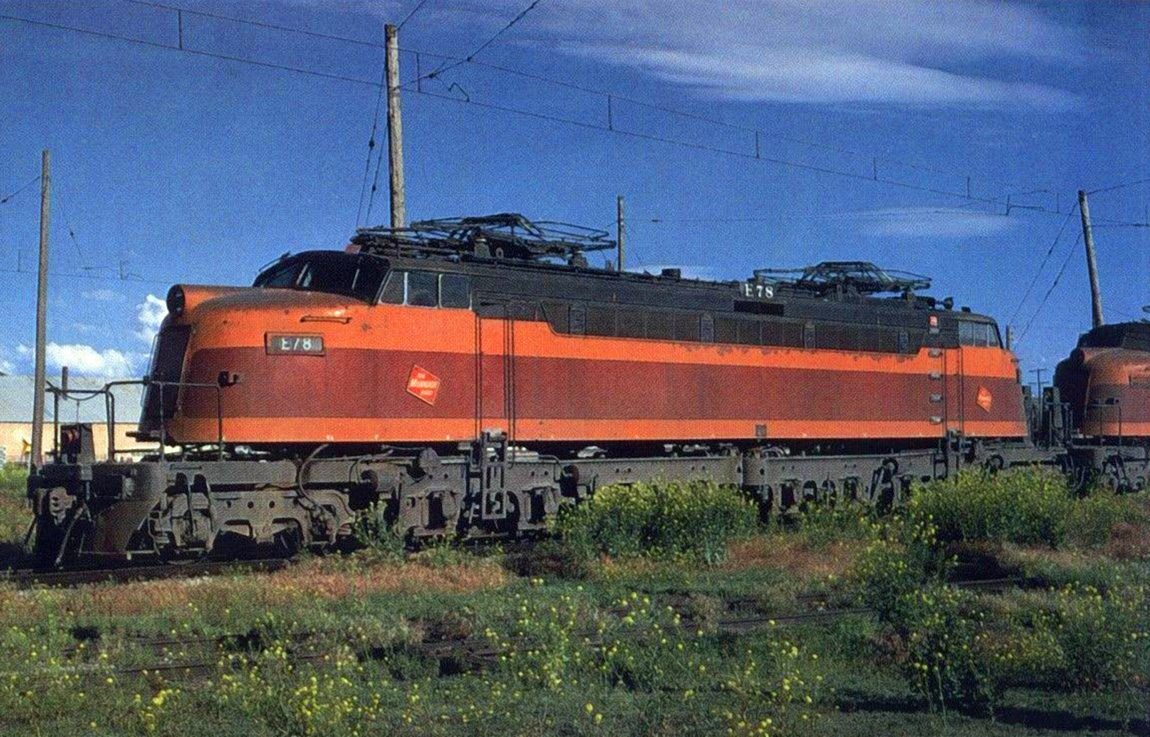 The "Little Joes" were purchased to replace the Milwaukee Road’s aging fleet of electrics which consisted of elderly GE boxcabs; classes EP-1, EF-1, and EP-2 (Bi-Polars).

The unreliable Bi-Polars were finally scrapped in 1962 and the original EP-1s and EF-1s were retired following the purchase of the EF-4s in 1950 (however, boxcab classes EF-2, EF-3, and EF-5 remained in service along with the "Little Joes" until the end).

The EF-4s proved to be a reliable and effective motor across the Milwaukee Road’s Rocky Mountain Division where grades through the Bitterroots sometimes peaked over 2%.

If you were lucky enough to see these magnificent locomotives in action they could regularly be seen assisting expedited freights with names like XL Special and Thunderhawk over St. Paul Pass and climbing Vendome Loop. 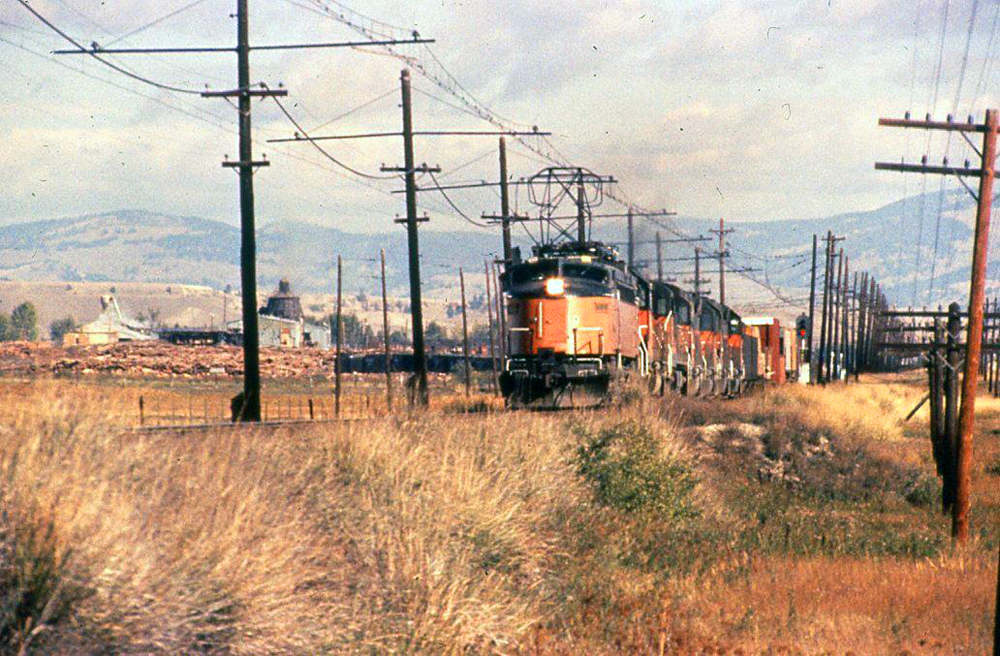 Until 1961 the "Little Joes" also assisted in carrying the regal Olympian Hiawatha passenger train from Harlowton, Montana to Avery, Idaho.

The two "Little Joes" designated for this service were painted in a splendid matching livery of two-tone orange and after the Milwaukee Road ended the Olympian Hi the units were returned to the more traditional solid orange with black trim.

For the "Little Joes", not only were they the last electrics purchased by the Milwaukee Road but the locomotives also made history by heading the final runs of electrified operations in June of 1974. 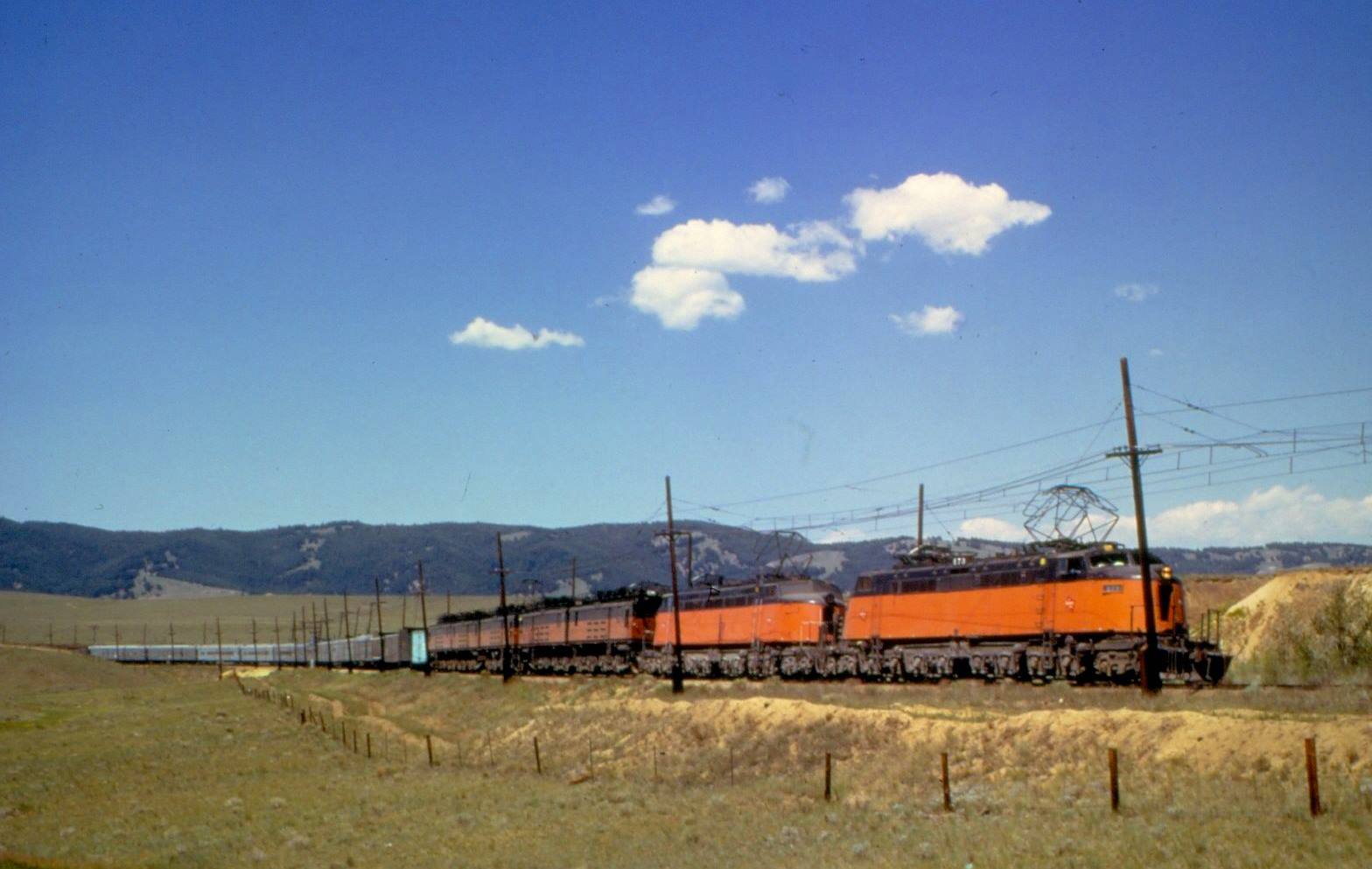 Milwaukee Road "Little Joes" and boxcabs have a steel gang train near Newcomb, Montana (just outside of Butte) during July of 1973. Bob Wilt photo.

One of these last runs occurred on June 15th when electrics E73 and E20 lead train #264 into Deer Lodge, Montana.

After the June shutdown the "Little Joes" remained in storage on the system until all were eventually scrapped, save for unit E70 which was donated to the City of Deer Lodge and today is displayed on the courthouse lawn painted in the Milwaukee's Olympian Hiawatha livery. 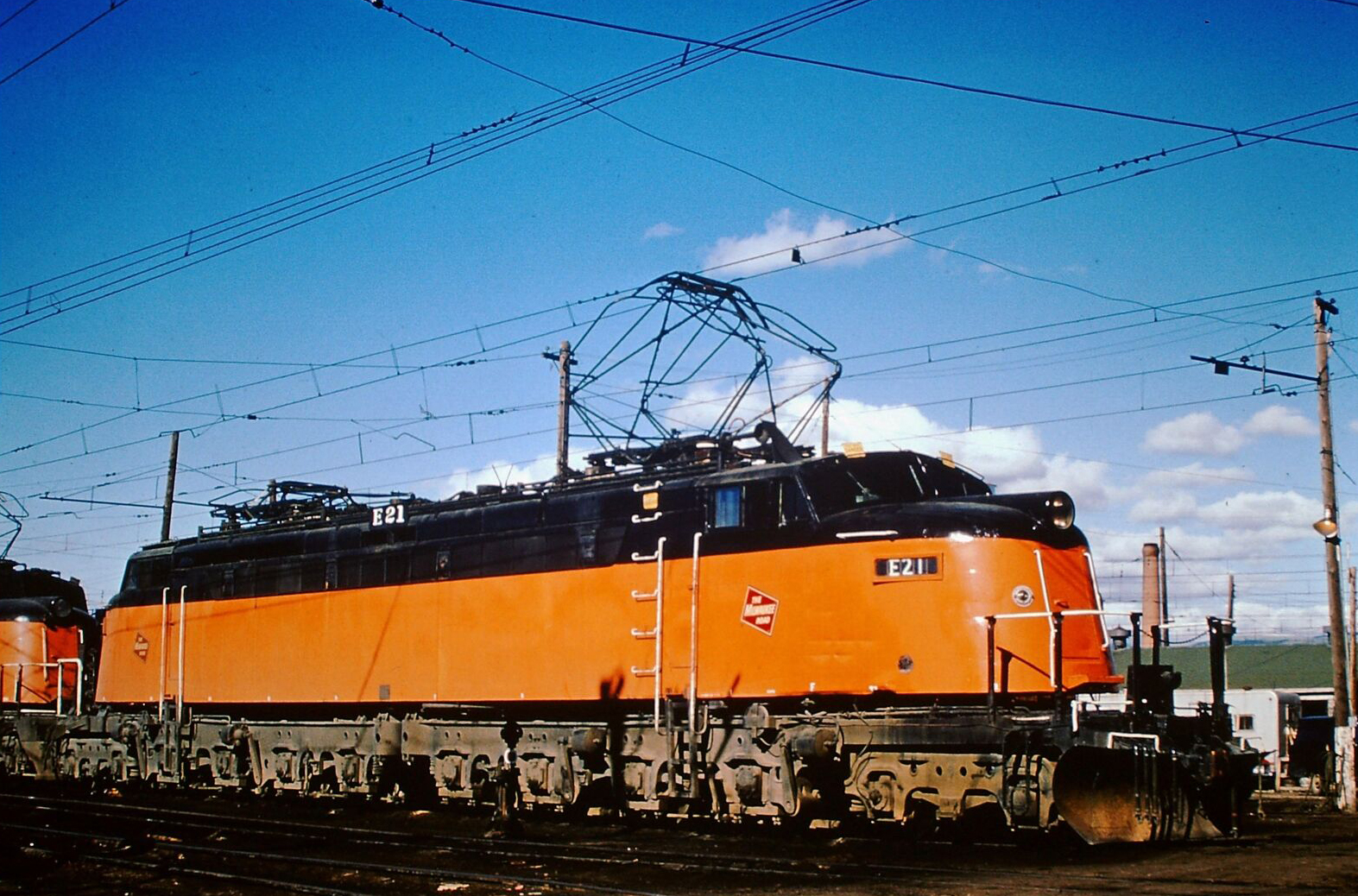 Milwaukee Road "Little Joe" E-21, having long since retired from passenger service, awaits its next freight assignment in Deer Lodge, Montana during June, 1972.

It is interesting to note that just after the Milwaukee Road shutdown its electrification the oil embargo hit causing oil prices to shoot through the roof and resulted in the railroad not only spending millions on fuel but also new locomotives to replace the electrics. 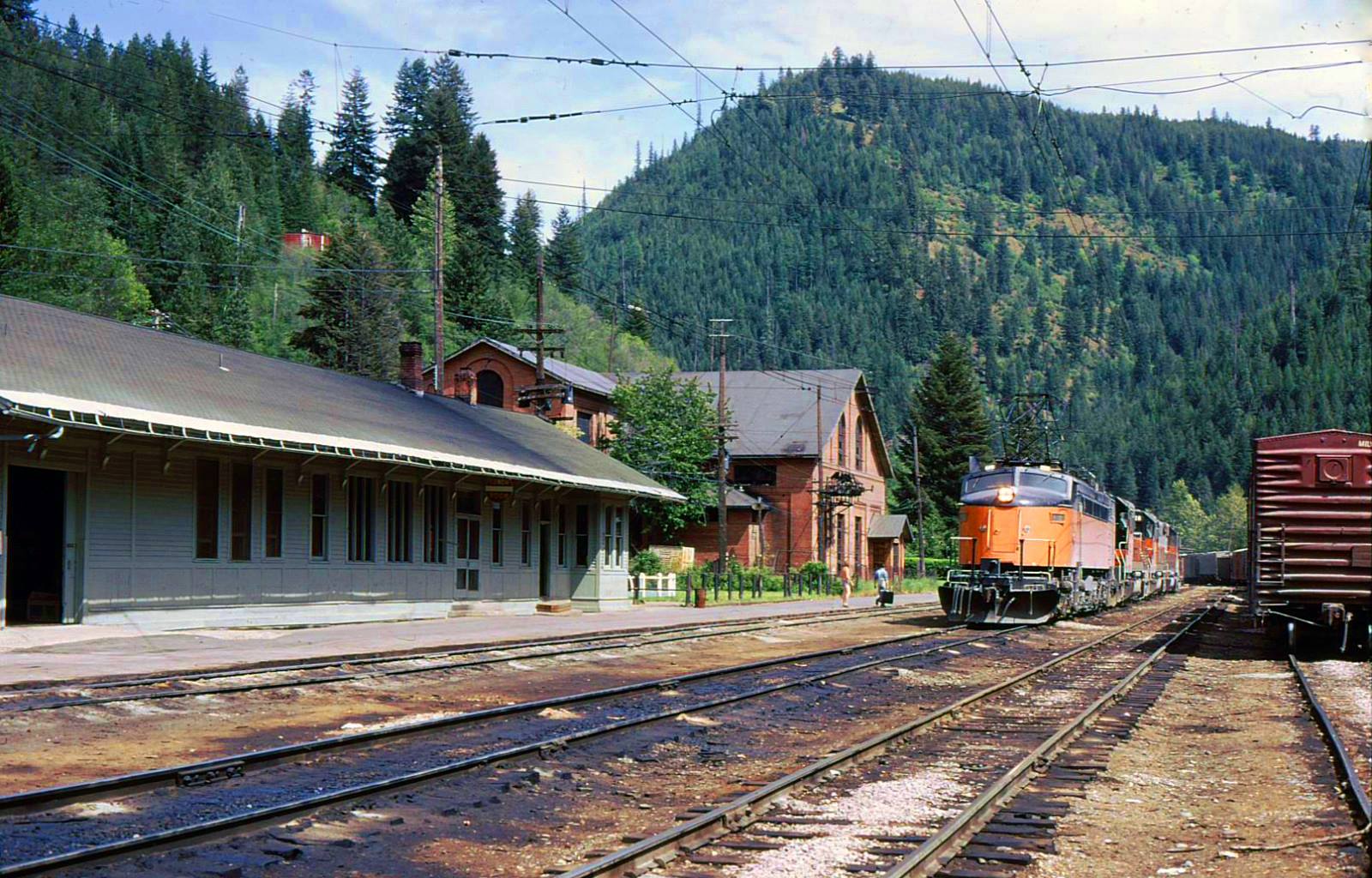 A Milwaukee Road "Little Joe" and other power is seen here at Avery, Idaho during a summer's day in the early 1970s. In the background can be seen Substation #14.

In any event, today electrics no longer conquer St. Paul Pass on the Rocky Mountain Division and all is quiet over the famous Pacific Extension except for the sound of Mother Nature and the occasional hiker along a number of rail/trails.

However, the sprinting Indian logo lives on with the Milwaukee Road Historical Association and Amtrak continues to operate a passenger train named after the famous Indian.