The John Bull was an early steam locomotive that was originally constructed in England and then shipped over to the United States.

As a British-built design it featured the latest technologies available during the early 1830s and remarkably, even at that early date of the railroad industry it closely resembled what all future steam locomotives would look like.

The Bull operated, more or less, regularly during its time on the Camden & Amboy (which later became a part of the Pennsylvania Railroad), remaining in service for more than 30 years. From a historical standpoint the PRR recognized the significance of the locomotive and saved it for posterity's sake.

Eventually, the locomotive was acquired by the Smithsonian Institution and due to its prominence was still in relatively good condition by that time. Today, it is on display to the public and amazingly is still in operational/serviceable condition although it has not been under steam for more than 30 years. 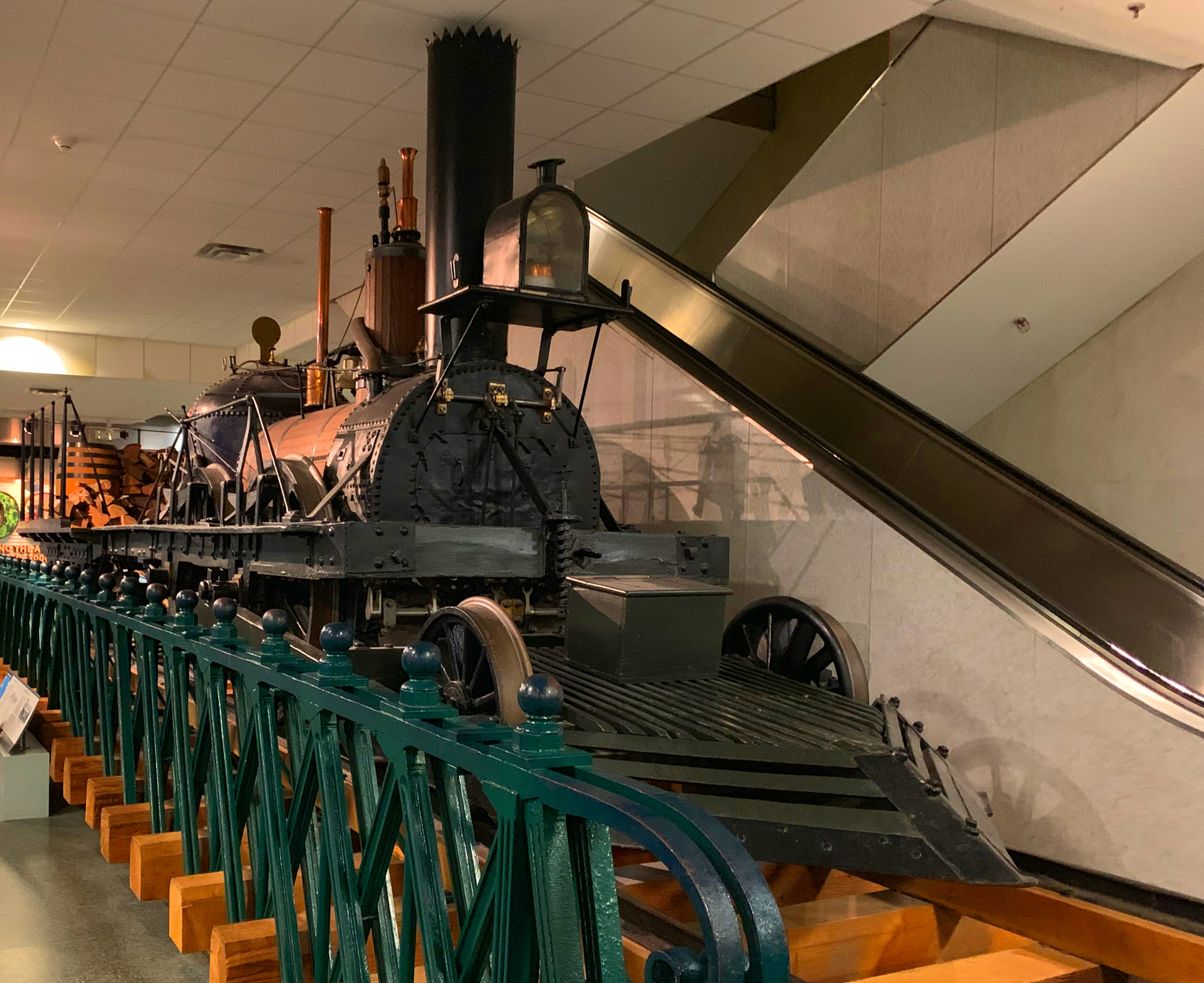 A view of the John Bull today at the Smithsonian's Museum of American History. Author's photo.

The Camden & Amboy Railroad was one of the earliest systems chartered in the United States. It was created on February 4, 1830 as the Camden and Amboy Rail Road and Transportation Company by Robert Stevens with the purpose of connecting the Delaware River (City of Philadelphia with the Raritan River (which linked up with New York City).

The route was opened to the public on October 1, 1832 where it had reached Hightstown, about 13 miles away. However, a year prior the C&A had already received the John Bull, which had arrived at Bordentown on September 4, 1831 having been shipped across the Atlantic Ocean aboard the Allegheny.

The locomotive was built in Newcastle, England where the top manufacturers of the day were located, Robert Stephenson & Company. It had been ordered by Stevens himself who took a trip to Britain to order a locomotive for his railroad.

Interestingly, the Bull's original design by the builders was not the classic appearance remembered today. It initially carried an 0-4-0 wheel arrangement similar to the Stourbridge Lion with a horizontal boiler, vertical smokestack on one end and a trailing carriage (early tender).

However, it lacked the later front cow-catcher, pilot wheels, and covered rear tender carriage. The Stephenson company based the locomotive on their Samson model, which apparently was quite popular with the four equal-sized driving wheels powered by two steam cylinders.

When operations first began the C&A used traditional horsepower as Stevens stored his John Bull (named after an English figure similar to America's Uncle Sam) away until the railroad was completed.

The work to rebuild the locomotive was handed over to chief mechanic Isaac Dripps who, unfortunately, had to do so without the aid of any drawings or instructions. Luckily, his work on steamboats at least gave him an idea of how steam boilers functioned and were assembled.

Amazingly, it took just 11 days to reconstruct the locomotive and it was ready for a test trials by September 15th. On November 12, 1831 the Bull performed a short run with New Jersey politicians and dignitaries riding along.

With the railroad still not completed, however, it was the last time the little 0-4-0 would run for two years. As the C&A neared completion in the spring of 1833 Stevens put the Bull to use helping to finish the route along with a handful of other steamers he owned by that time.

It should be noted that when first put into service the John Bull was named Stevens and given the roster number of 1. However, crews began referring to it as the old John Bull, which later became its official name.

After a short time in service crews realized that the locomotive was too heavy for the trackage used on the C&A, its 10-ton frame simply could not be supported, which caused numerous derailments.

To correct this problem the steamer was given a front, pilot axle to help guide it into curves, which kept it from derailing so often.

Curiously, workers decided to add affix a cow-catcher to this lead axle as nothing more than an afterthought, a feature that later became quite useful in larger models like the 4-4-0 American to move cows off of the tracks without derailing the train.

To add the pilot axle, however, required the removal of the coupling rod between the two main axles. Because of this the John Bull's only powered wheel-set was the rear axle, closest to the control stand although it was still listed as a 2-4-0.

Further updates continued for the locomotive as crews realized the need for a makeshift cab over the control stand would, at the very least, keep the engineer out of the rain and wind.

However, this cab was not, at first, built onto the rear of the locomotive; the trailing tender was enclosed and a short roof was extended over the engineer's area. Finally, two more additions added included a small headlight and bell.

During the Bull's final years in service this was changed to the locomotive having its own, enclosed cab and a double-trucked tender.

After 35 years of faithful service the Bull was retired in 1866. On February 1, 1867 the C&A was leased by the Pennsylvania Railroad, which understood the significance of the locomotive.

As a result, the locomotive was restored for publicity purposes where it appeared for the 1876 United States Centennial Exposition in Philadelphia.

Two years later the PRR showcased the steamer at the National Railway Appliance Exhibition in Chicago, Illinois where the railroad found a buyer, the Smithsonian Institution, which would acquire it 1885.

The Bull continued to tour the country appearing at the World's Columbian Exposition in Chicago during 1893 and attended the Baltimore & Ohio's Fair of the Iron Horse in Baltimore, Maryland in 1927.

In 1981 it was restored to operating condition and operated by the Smithsonian, serving as the world's oldest operable steam locomotive. Today, it is still on display although a replica may also be seen at the Railroad Museum of Pennsylvania.