Kansas City Union Station today is the pride of the city. During the heyday of passenger rail travel the terminal was used by several classic railroads with many notable streamliners calling there.

However, from the 1970s through the mid-1990s this was not the case as the station, once the second largest in the country, was a mere eyesore.

Since 1996 restorations have brought the grand building back to its former glory and today you cannot only still catch Amtrak trains from Union Station (the regional Missouri River Runner and long-distance Southwest Chief) but also shop, dine, and even watch movies there! 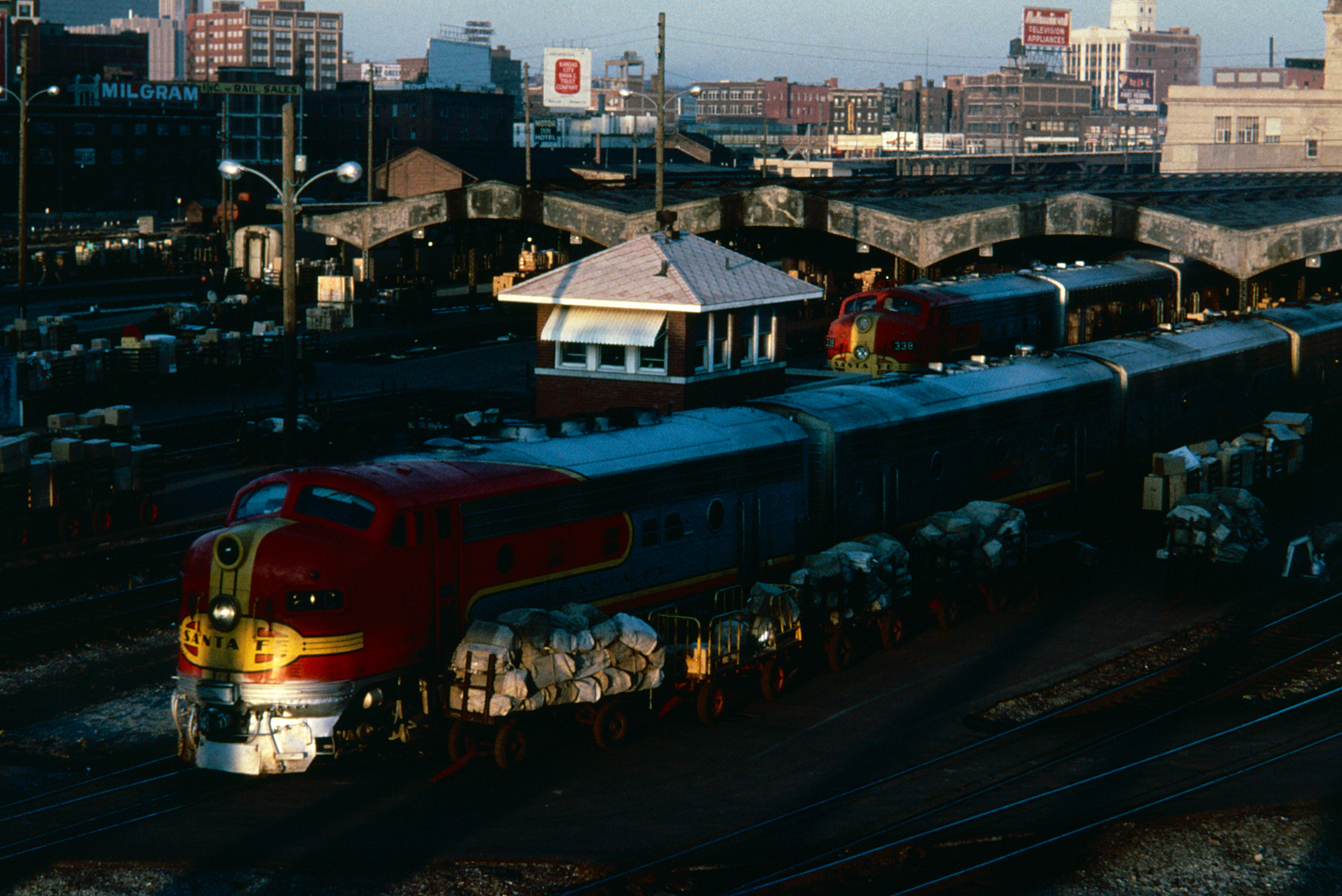 Kansas City, which laid some 250 miles away from St. Louis, across the state of Missouri, was situated at the confluence of the Missouri and Kansas Rivers.

It was originally established on June 1, 1850 as the town of Kansas during efforts to settle the West and later renamed Kansas City.

Following the Civil War the United States government expedited this process by funding the Transcontinental Railroad to push economic growth far beyond the Mississippi River.

One federally chartered line, which eventually became the Kansas Pacific Railway, was the Leavenworth, Pawnee & Western of 1855.

The railroad began construction from Kansas City in 1863 and extended to Lawrence by 1864.  In August of 1870 the road reached Denver and was acquired by Union Pacific in 1874.

From the east the first line to reach Kansas City was the Hannibal & St. Joseph Railroad, which opened a branch there on July 3, 1869. 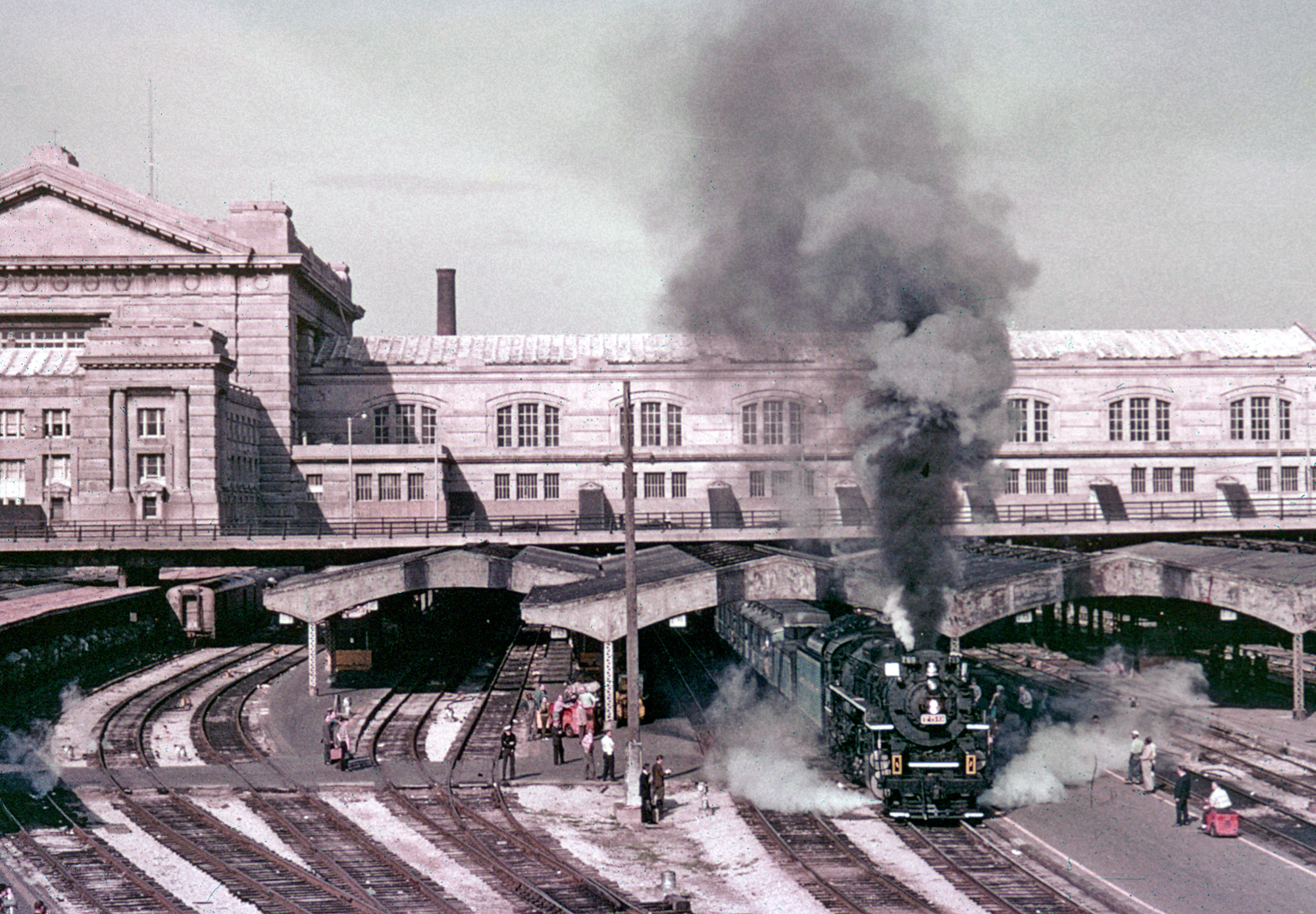 In the succeeding years more and more railroads reached KC, which established itself as the dominant center of trade in the region and became somewhat similar to St. Louis in this regard.

With a growing city it was clear a centralized rail terminal was needed and Union Depot opened on April 8, 1878 between Union Avenue and present-day West Bottoms near the riverfront.

It was designed partially in the Gothic Revival style by lead architect Asa Beebe Cross.

While a beautiful structure with a central clock tower, arched windows, and dormers of various size, alas, after just two decades of service it proved inadequate and was prone to flooding (there also lacked enough room for needed expansion).

And so, as early as 1903 plans were drawn up for a new terminal.  As railroads and the city worked out the details the former established the jointly-owned Kansas City Terminal Railway for the purpose of operating the new facility. 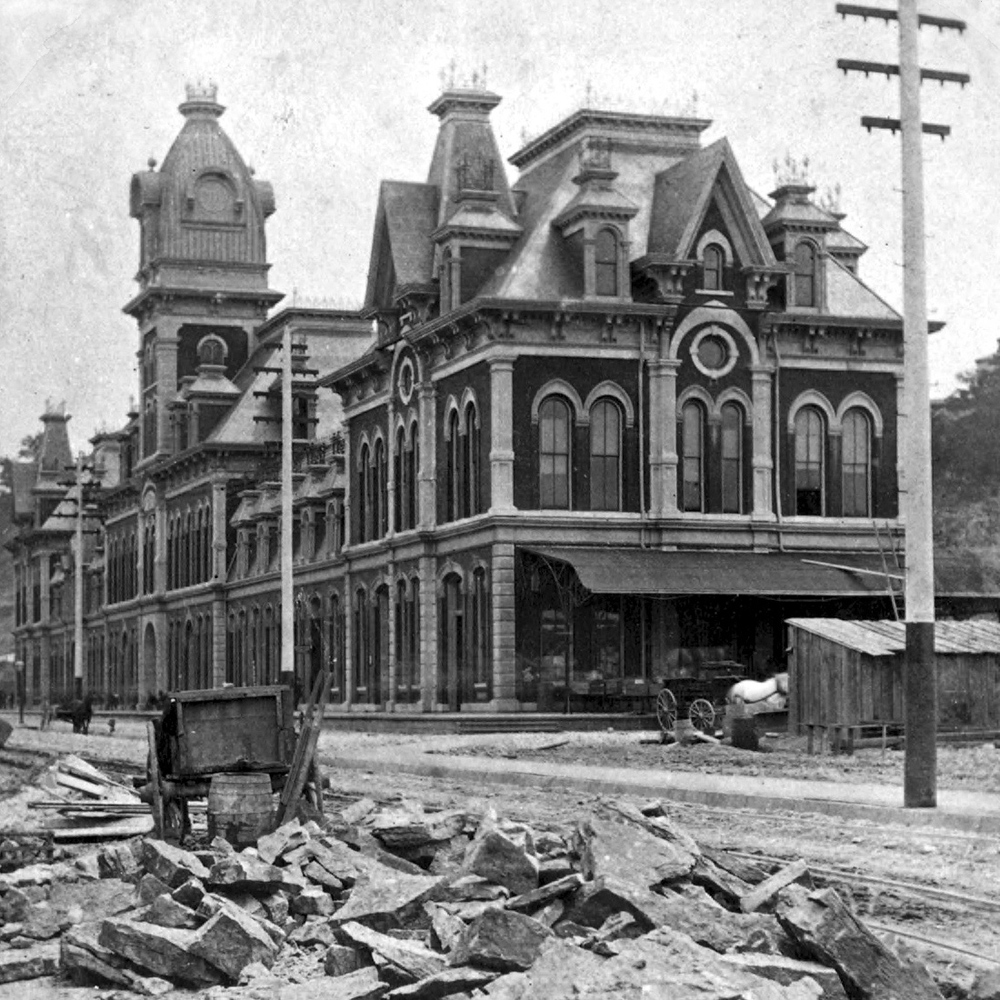 The original Union Depot circa 1880.

There were a dozen railroads involved in the project including:


The city sought a terminal that rivaled those in New York and hired architect Jarvis Hunt to design a magnificent facility.

Hunt was already known for his work having conceived recently-built 16th Street Station in Oakland and Joliet Union Station in Illinois.  All three were dressed in the Beaux-Arts style.

Kansas City Union Station employed wide open spaces and ornate decorations on the walls and ceilings including a magnificent clock in the Grand Hall and three huge chandeliers.

It took several years but finally opened on October 30, 1914 after eight years of construction, then the second largest in the country.

The station was impressive to say the least with marble and terra cotta used throughout its construction, three different sub-levels, restaurants, barbershops, offices (for the owning railroads), a jail, and the building was even powered by its very own power plant!

It was so large at the time, with its massive center concourse, that only the recently opened Pennsylvania Station in New York City was larger.

For instance, the Grand Hall topped out at 95 feet and the overall building fielded floor space of some 850,000 square feet.

Naturally, some of the most well remembered passenger trains called there such as:


The facility was also designed to handle the city's streetcar and interurban traffic.

Despite being opened during the heyday of rail travel the terminal's peak passenger traffic did not occur until 1945 when it witnessed nearly 680,000 travelers pass through its doors!

This, of course, can be explained by World War II when railroads were moving incredible numbers of people and freight tonnage.

Outside of the war years the terminal still saw very high passenger numbers during the early 20th century, save for the downturn following the Great Depression.

Kansas City Union Station's decline began after the war, following a trend across the country.

With the rise of the automobile, new Interstate highways, and improved air travel the public abandoned trains in increasingly larger numbers.

By the 1970s the building was beginning to show serious neglect even though it had been placed on the National Register of Historic Places in 1972. 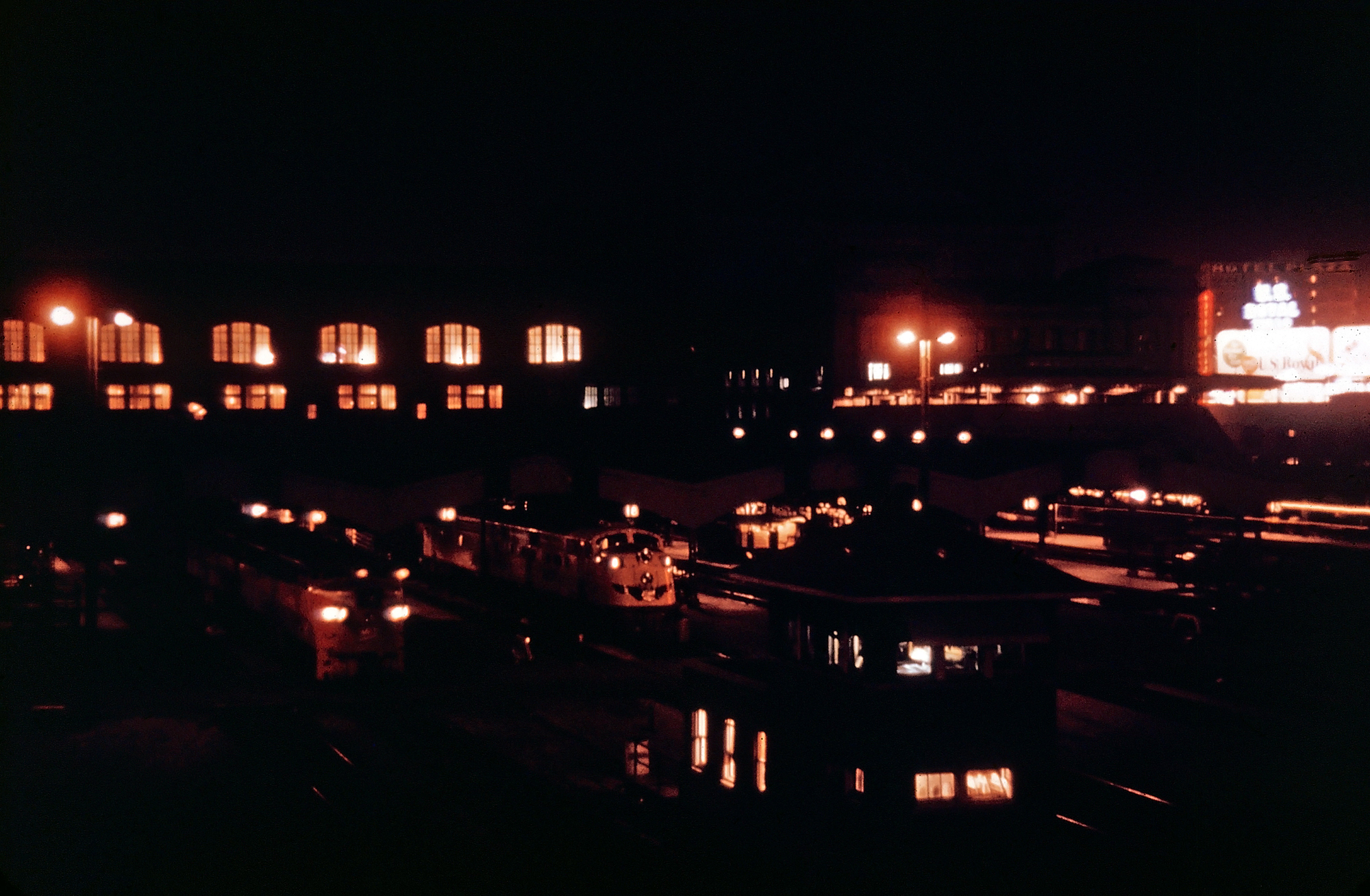 A busy night scene at Kansas City Union Station during the 1950s. A Union Pacific and Missouri-Kansas-Texas (Katy) train can barely be made out in the darkness. A.C. Kalmbach photo. American-Rails.com collection.

Amtrak took over most intercity passenger rail travel in the spring of 1971 and by 1973 (due partially to declining service) barely 30,000 folks passed through the terminals doors.

Things got so bad that by 1985 Amtrak decided to move into a smaller building nearby (due largely to the building's deteriorating condition).

While the terminal sat all but empty over the next decade it was saved by the people of Kansas City when they approved a 1/8-cent sales tax that helped partially fund the station's restoration.

This project began in 1997 and was completed in 1999. Today, Kansas City Union Station has been completely restored to its 1914 opening appearance, right down to the authentic light fixtures!

Even the old Union Station Powerhouse was restored, now used by the Kansas City Ballet and known as the Todd Bolender Center for Dance and Creativity.