The Kansas City-Florida Special was one of the Southern's more obscure named trains although it did enjoy relatively strong ridership for several years after World War II.

As its name implies this particular Special, one of many within the railroad's fleet, served the Midwest to Deep South market and operated in conjunction with the St. Louis-San Francisco Railway (Frisco) to reach points west of Birmingham, Alabama.

As the years passed its rather circuitous routing eventually hurt ridership after other, more efficient modes of transportation came into their own by the 1950s, notably the Interstate highway system and faster airline service.  This resulted in the train's discontinuance by the mid-1960s.

The Kansas City-Florida Special was not a train one would have imagined to survive so long on the Southern's timetable given its rather unremarkable name.

It used a routing rather unorthodox running from Kansas City where the train was handled to Birmingham via the Frisco and then continuing southeastward to Jacksonville, Florida over the Southern.

The Louisville & Nashville was the railroad's only true competitor in this market although the L&N never offered a train with first class services from the Kansas City area (although it did dispatch several from Chicago to Florida).

This gave the Southern a unique advantage and perhaps is why the Special maintained strong popularity for many years.  Interestingly, the Atlantic Coast Line and Seaboard Air Line, two roads that blanketed Florida, principally focused on the northeastern market.

The practice of Southern's trains running through to other points beyond its own system predated the railroad itself and such options helped it maintain a high level of patronage for many years.

When the Kansas City-Florida Special was inaugurated on November 26, 1911 it provided accommodations that became standard on the Southern's top trains; Pullman sleepers, lounge cars, and a full-service diner.  In later years "De  Luxe" reclining seat coaches became available as did air-conditioning.

For power the train normally relied on the Southern's beautiful fleet of 4-6-2s, which were adorned in a stunning livery of Virginia Green with gold trim after the 1920s.

The relatively flat grades east of Birmingham meant the Pacifics could maintain running times even when pulling heavyweight equipment. 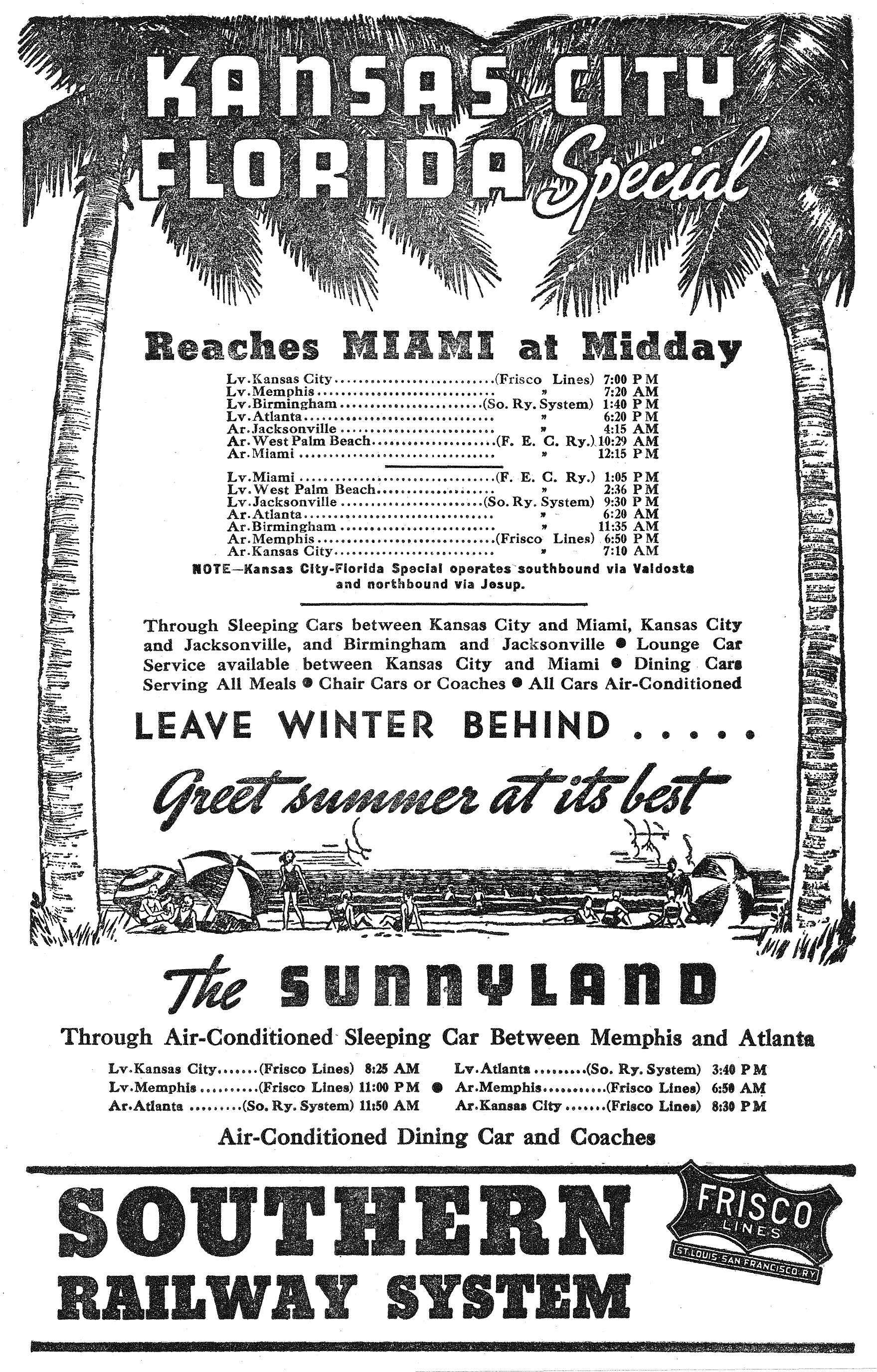 A 1940 poster of the Kansas City-Florida Special. Author's collection.

The railroad keyed in on the train's distinctive market by mentioning such in advertisements during the 1940s and 1950s.  For instance one read (and included above) that:

"Only the Kansas City-Florida Special offers through train service between Kansas City and the East Coast of Florida [with] convenient one-change connections at Kansas City and Pacific Coast points."

The Special always operated with heavyweight cars even after the Southern spent millions in the 1940s to upgrade its premier trains (the Southerner, Crescent, and Tennessean) with lightweight, streamlined equipment.

However, by the 1950s it ran with some rebuilt, streamlined heavyweights from time to time and on rare occasion carried a lightweight car in the consist (a normal train usually boasted anywhere from 10 to 15 cars).

By then the train's venerable steam power had been retired, replaced by sleek new diesels in the form of Electro-Motive E6s and then later E7s, E8s, and every so often FP7s (which seemed to be a favorite of the Southern in the last years of passenger service).

As the railroad entered the 1960s it was clear that intercity rail travel was on a perpetual decline.

(Below is an abbreviated timetable of the Kansas City-Florida Special dated to February of 1961.  Note that through service to Miami [Florida East Coast] and Sarasota [Seaboard Air Line] is not listed.)

Before the decade had closed the ever-financially conscious Southern had either greatly reduced or ended several of its trains.

The Kansas City-Florida Special was one of the earliest to go, an interesting move considering that it still had respectable ridership west of Atlanta.

Furthermore, the train's consist in 1961 continued to include sleepers, lounges, a diner, and reclining seat coaches.

During 1964 the Special was discontinued along with the Ponce de Leon (Cincinnati-Jacksonville) although according to Tom Murray's book, "Southern Railway," the railroad was still offering "36 daily passenger trains" at that time.