The Kinzua Bridge, also known as the Kinzua Viaduct, was a large and foreboding iron structure, which spanned Pennsylvania's Kinzua Valley. It was quite a sight to see this feat of engineering rising from the valley floor as it reached out to connect with neighboring hills.

The original bridge was completed in the 1880s and built by a predecessor of the Erie Railroad in the hopes of reaching the rich coal fields south of the Pennsylvania/New York state line.

The property became a subdivision of the growing Erie system in the late 19th century, which continued to use it through the 1950s. It was eventually acquired by the state of Pennsylvania, which saw it as a potential tourist attraction along with the surrounding property.

For more than 30 years the rail line and grounds surrounding the bridge turned out to be quite popular with tourists. Sadly, a strong thunderstorm and tornado in the summer of 2003 destroyed much of the central span. What remains today is still a park and walking bridge. 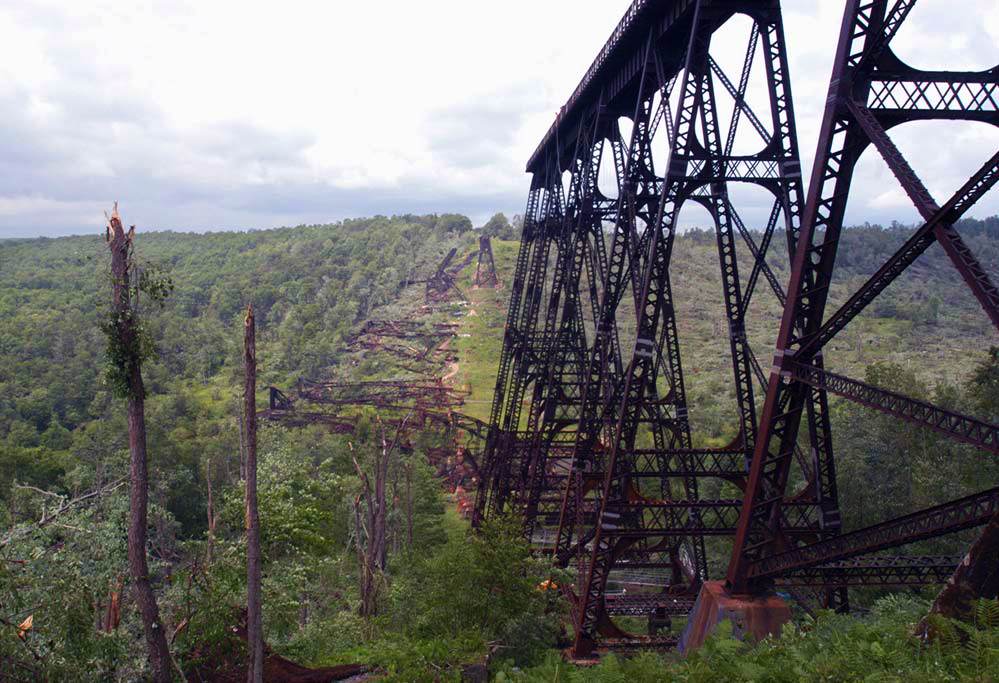 A present-day view of Kinzua Viaduct following the destruction caused by an F-1 tornado on July 21, 2003.

The history of the Kinzua Bridge begins with the New York, Lake Erie & Western Railroad a system that was the immediate predecessor of the Erie Railroad.

In the early 1880s, with the railroad stretching from New York City to Buffalo and northwestern Pennsylvania, officials of the company were interested in extending a branch to tap the coal fields around Johnsonburg, Pennsylvania in Elk County.

To do so, however, would require a route that twisted around valleys and hills particularly at its northern end. It was ultimately decided that the branch would divert southward from Carrollton, New York (just southeast of Salamanca) and connect with Johnsonburg with spurs extending from that point to reach nearby mines. 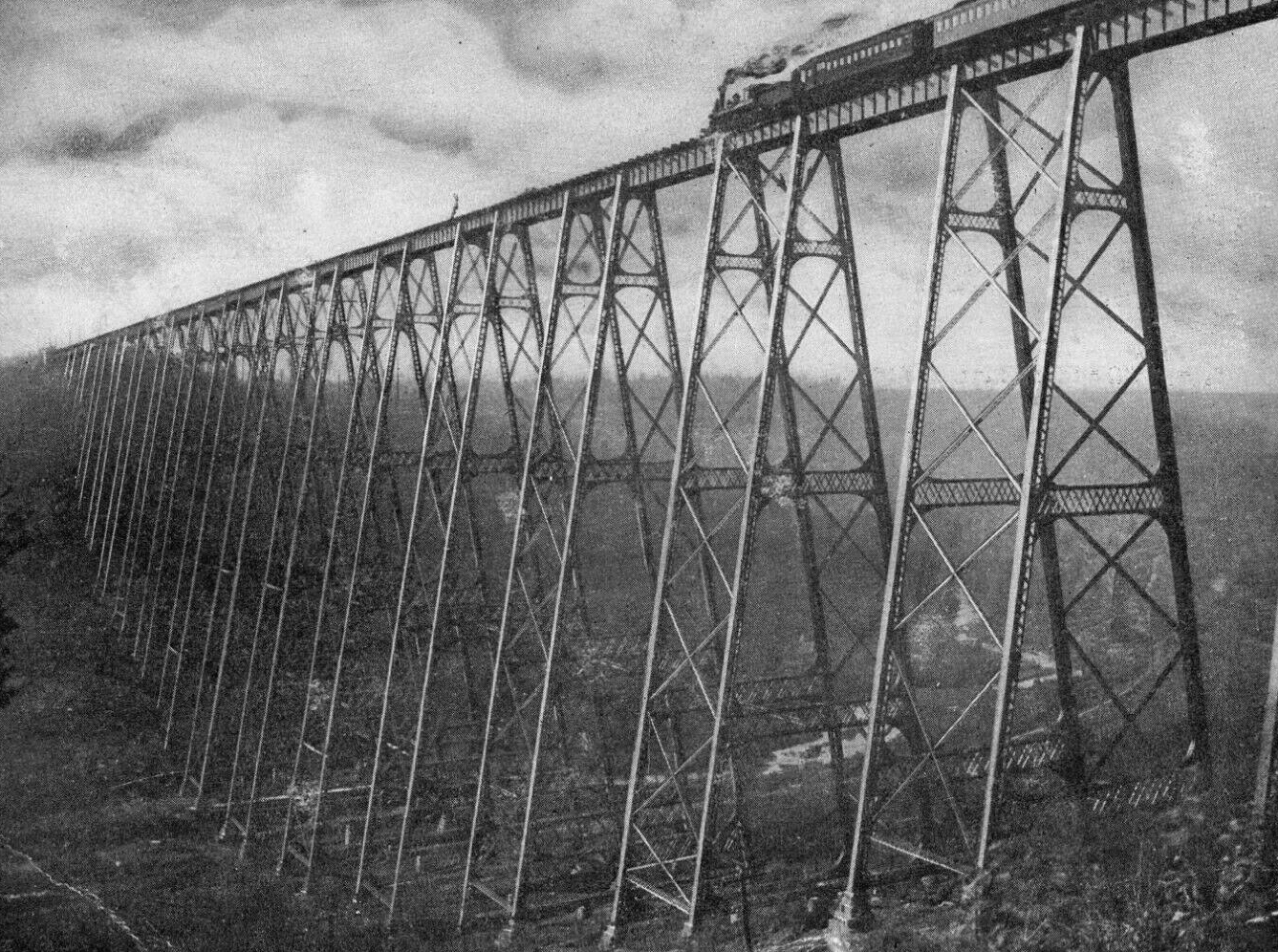 An early postcard of Kinzua Viaduct showing a train crossing the 2,100-foot structure. It loomed some 301.5 feet above the valley floor.

In an attempt to make the route not only shorter but also with fewer curves and grades the railroad's president, Thomas Kane, offered to simply span the entire Kinzua Valley. Perhaps the most surprising event regarding this plan was merely the speed at which it all happened.

The idea to bridge the valley was first discussed in 1882. Work began on May 10th of that year and by August 29th the massive structure was completed, just 94 days later!

The viaduct was designed by Octave Chanute and contract work was carried out by the Phoenix Iron Works located in Phoenixville, Pennsylvania which used straight wrought iron in the construction process, not steel. The foundation was sandstone, acquired from local quarries, and required 110 piers to span the valley. 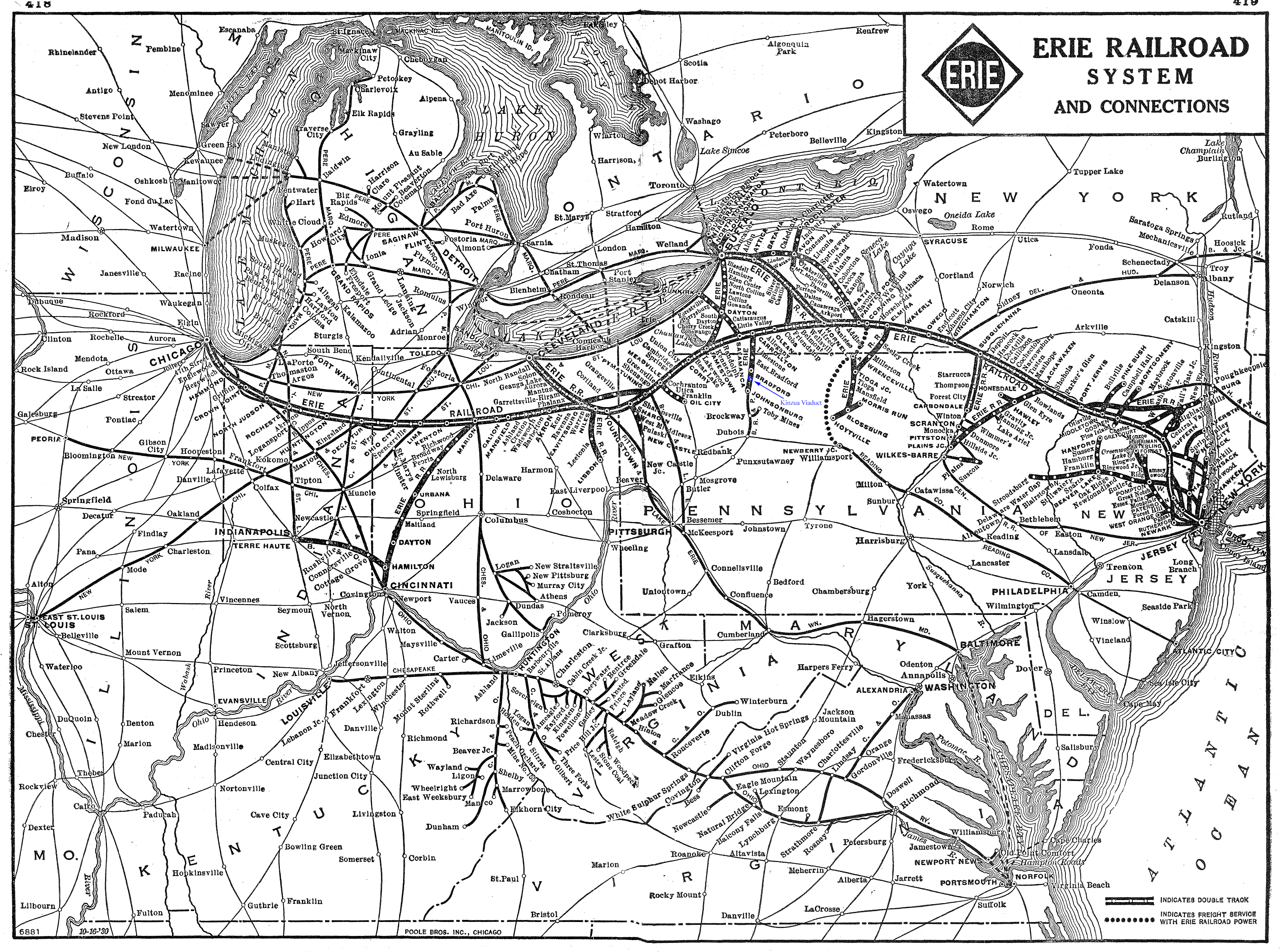 A map of the Kinzua Viaduct (denoted in blue) from Erie Railroad's 1930 system map. Author's collection.

These piers supported 20 towers, with the tallest standing 301 feet from the valley floor (which included the height to the top of rails). Overall, the viaduct was 2,052 feet long and was billed as the "Eighth Wonder of the World" when it opened (an interesting name considering that more than one railroad engineering feat during that time claimed the same, or similar, title!).

The structure was also the tallest in the world at the time but it soon lost this title in 1884. Interestingly, while it was meant mostly as a freight line it quickly drew large crowds of tourists hoping to experience a trip high above the valley and the breathtaking views available. As a novel marketing idea the railroad began hosting regular excursions over the line. 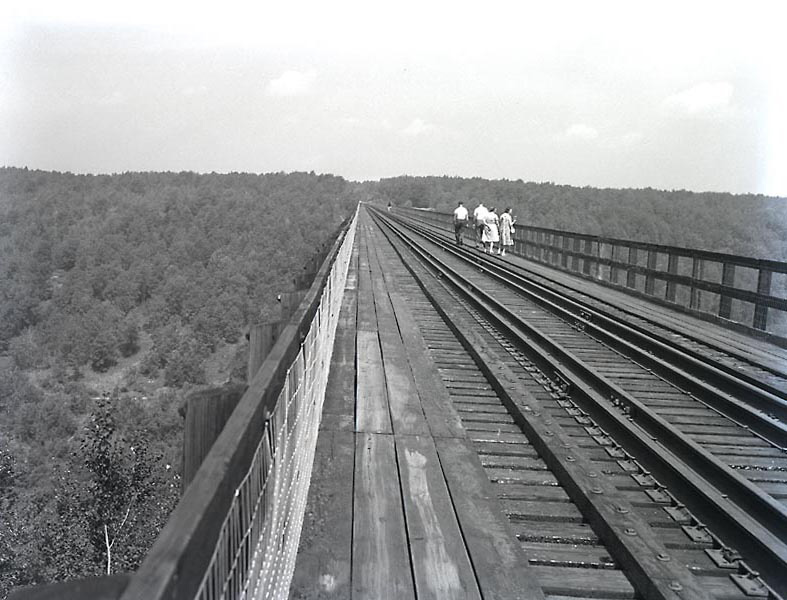 The Kinzua Viaduct in the 1960s. At this time the structure was often not in regular service. Instead, it was known as the Kinzua Bridge State Park from 1963 until 1987.

In 1893 the New York, Lake Erie & Western fell into bankruptcy once more which prompted yet another reorganization, emerging as simply the Erie Railroad in 1895 (the company had already been known as the Erie Railway between 1861 and 1878).

At the turn of the century in 1900 it was concluded that the bridge needed to be completely rebuilt with stronger materials to allow for the heavier trains and equipment now in regular use.

In late May of that year worked commenced to take down the old structure and simultaneously replace it with new towers and deck plate girders. The new Kinzua Bridge was designed by C.R. Grimm and constructed from much more durable steel fabricated by the Elmira Bridge Company. Overall, the bridge appeared quite similar to the original save for its more rigid look. 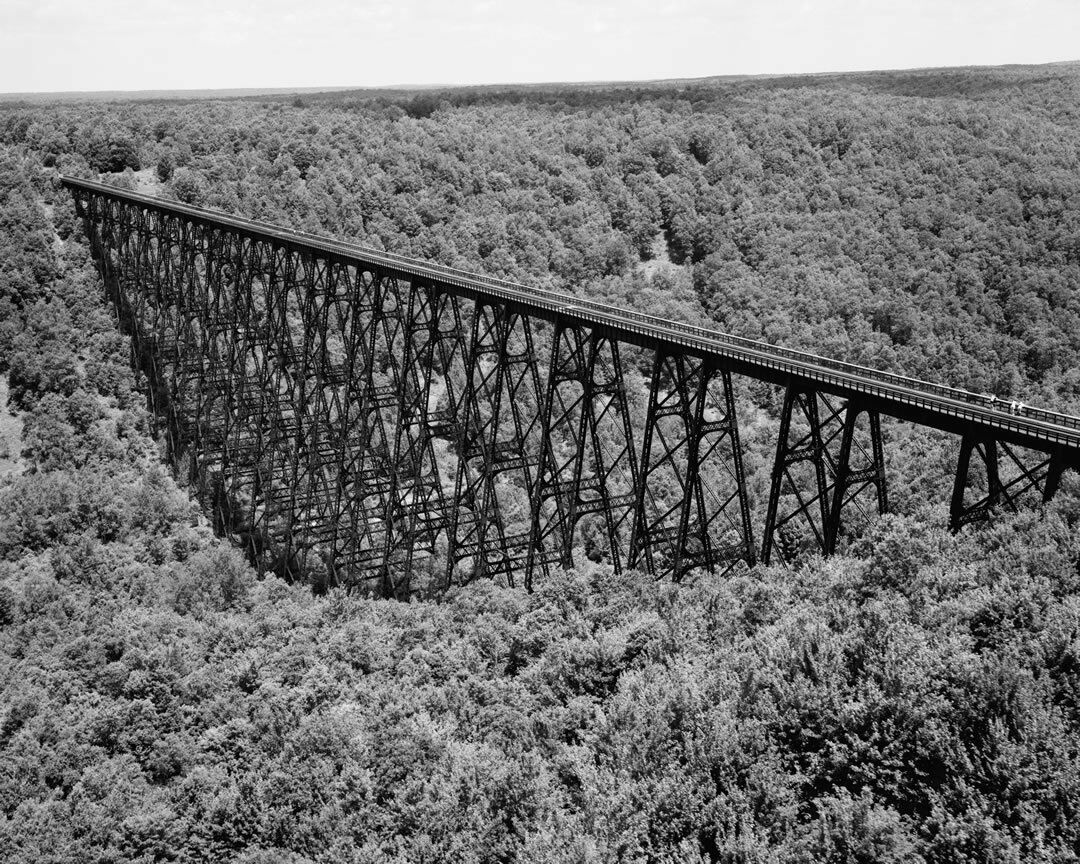 An aerial view of Kinzua Viaduct, circa 1971. Ironically, for 24 years (1963-1987) the entirely intact structure was also used a foot bridge, part of the Kinzua Bridge State Park.

By September 25 of that year the rail line was reopened to traffic and could more than accommodate loaded coal trains and the heaviest steam locomotives of that time. The bridge remained in use for the next 50 years into the coal mines around Johnsonsburg began to play out.

On June 21, 1959 the Erie ran its last scheduled train over the branch and subsequently sold the line to the Kovalchick Salvage Company of Pennsylvania soon afterward.

Not wishing to see the bridge scrapped the company resold the structure to the state, which created the Kinzua Bridge State Park on August 12, 1963. The route, however, remained dormant for nearly 25 more years until 1987.

That year, on July 31, tourist trains would again operate over the Kinzua Viaduct when the Knox & Kane Railroad purchased a short section of the line, which included the bridge, for the sole purpose of hosting excursions.

The K&K dated back to 1982 as a short line operating about 65 miles of former Baltimore & Ohio trackage between Knox and Mt. Jewett, Pennsylvania (property that was originally owned by the Buffalo, Rochester & Pittsburgh). Its new addition continued northeast for about five miles to reach the bridge.

Just as the structure had done when it first opened, thousands rode the K&K annually to experience the thrill of riding high above the Kinzua Valley. These trips continued until 2002 when engineers decided that the bridge needed major structural work for trains to continue using it.  For more reading about the history of the Kinzua Bridge please click here. 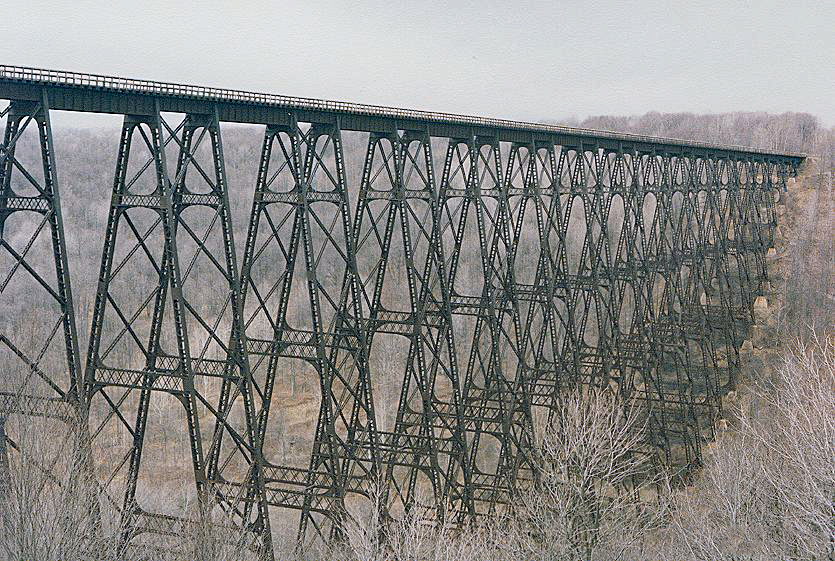 This newer photograph shows the viaduct as it appeared on February 20, 1983 which was then dormant and not in use although under state ownership. Doug Kroll photo.

This was funded by the state but unfortunately, as work had commenced a devastating severe thunderstorm hit the region on July 21, 2003 spawning an F1 tornado, which destroyed many of the central columns. With a price tag of $45 million estimated to rebuild the viaduct it was decided to simply repair the remaining approaches and turn them into a walking trail at the park.

With the loss of the bridge the Knox & Kane saw an immediate decline in passengers for its tourist trains, ultimately resulting in the railroad suspending the service. In 2006 the K&K ended all operations with its equipment and trackage sold by the same company that had once owned the bridge, the Kovalchick Corporation (formerly known as the Kovalchick Salvage Company).