Kansas Railroads In "The Sunflower State"

Kansas railroads are extremely rich in history albeit one may not think or realize it when they see that flat open farm country that defines the state.

At one time Kansas ranked a whopping third in total rail mileage due to its rich agricultural base as railroads looked to tap all corners of the state to reach these areas (Kansas is regarded as one of the granger states because of its farming importance to railroads).

Beyond farming, Kansas became a battleground of tycoons who attempted to outduel one another for control of railroads in the western United States, most notably Jay Gould and Edward Harriman.

Their efforts led to thousands of miles of redundant tracks in Kansas which surprisingly remained in service well into the mid-20th century.

For these reasons, the state suffered thousands of miles of lines removed after World War II and today you can still see these old grades scarring the landscape.

While Kansas has since slipped in this category and today only carries about half of its all time high (much of this loss has been the abandonment of these agricultural branch lines during the 1970s and 1980s), railroads are still very important in the Sunflower State.

These include Class I systems BNSF Railway, Union Pacific, Kansas City Southern all operating key routes within the state along with a number of regional and short line carriers. 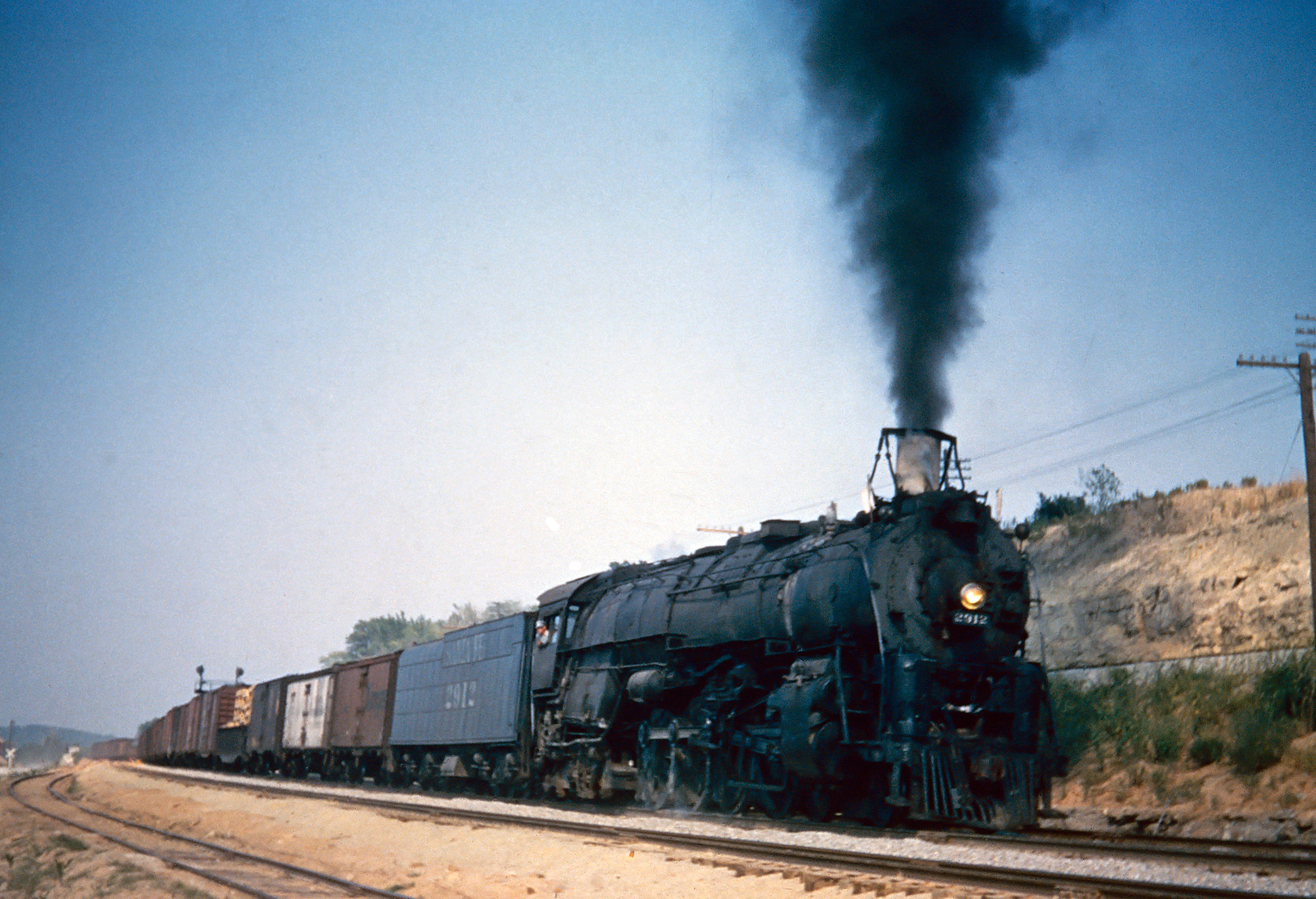 The state's railroads date back to the Leavenworth, Pawnee & Western, which was chartered in 1855 to connect the Missouri River with Fort Riley.

Construction of the line did not actually begin until 1863 at which point it was organized under the name of the Union Pacific Eastern Division by Congress.

The Union Pacific, of course, came about because of the Pacific Railroad Act of 1862 to build the country's first transcontinental railroad. 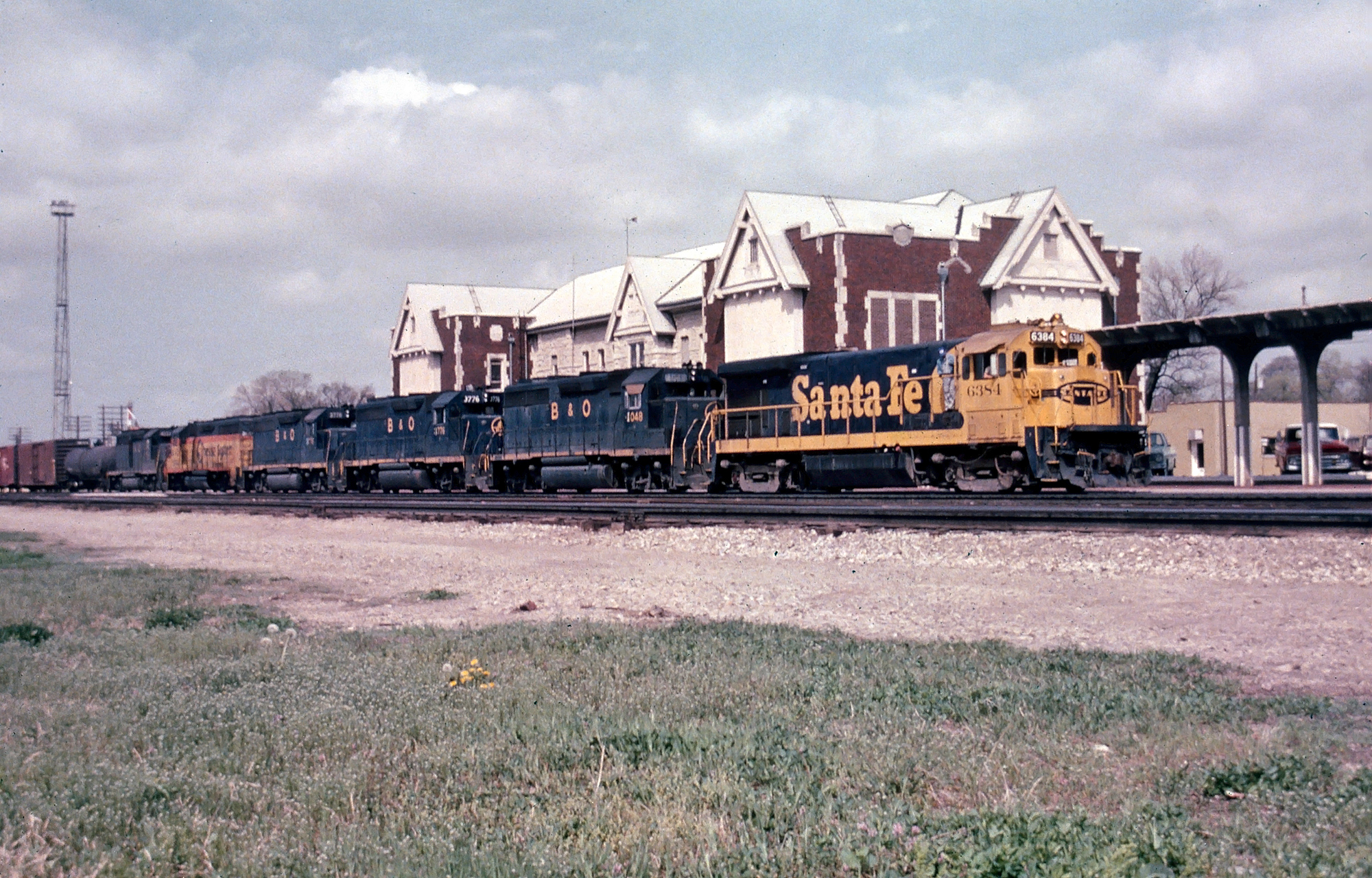 Santa Fe B23-7 #6384, and a group of leased Baltimore & Ohio Geeps, have an eastbound freight at Emporia, Kansas, circa 1980. The historic depot later burned in 1999. Mike Bledsoe photo. American-Rails.com collection.

Kansas is another state which has suffered a tremendous loss to its rail network.  Like Iowa, Minnesota, Illinois, Wisconsin, and other Midwestern states, Kansas was blanketed with agricultural branch lines.

It was so thick with railroads the state's peak network approached 10,000 miles.  All of the region's major carriers served Kansas although the Santa Fe and Missouri Pacific provided the greatest coverage.

As such, most of the abandoned lines here are of AT&SF and MP heritage.  As it turns out, the leadership of these roads, William Barstow Strong (AT&SF) and Jay Gould (MP), began a fierce battle during the latter 19th century for control of the region's agriculture and cattle trade.

Gould, in particular, laid down a web of branch lines for no other reason than to stave off Strong's growing empire.  Surprisingly, some of these lines survived far longer than they should have and were still in service into the 1970s-1980s. 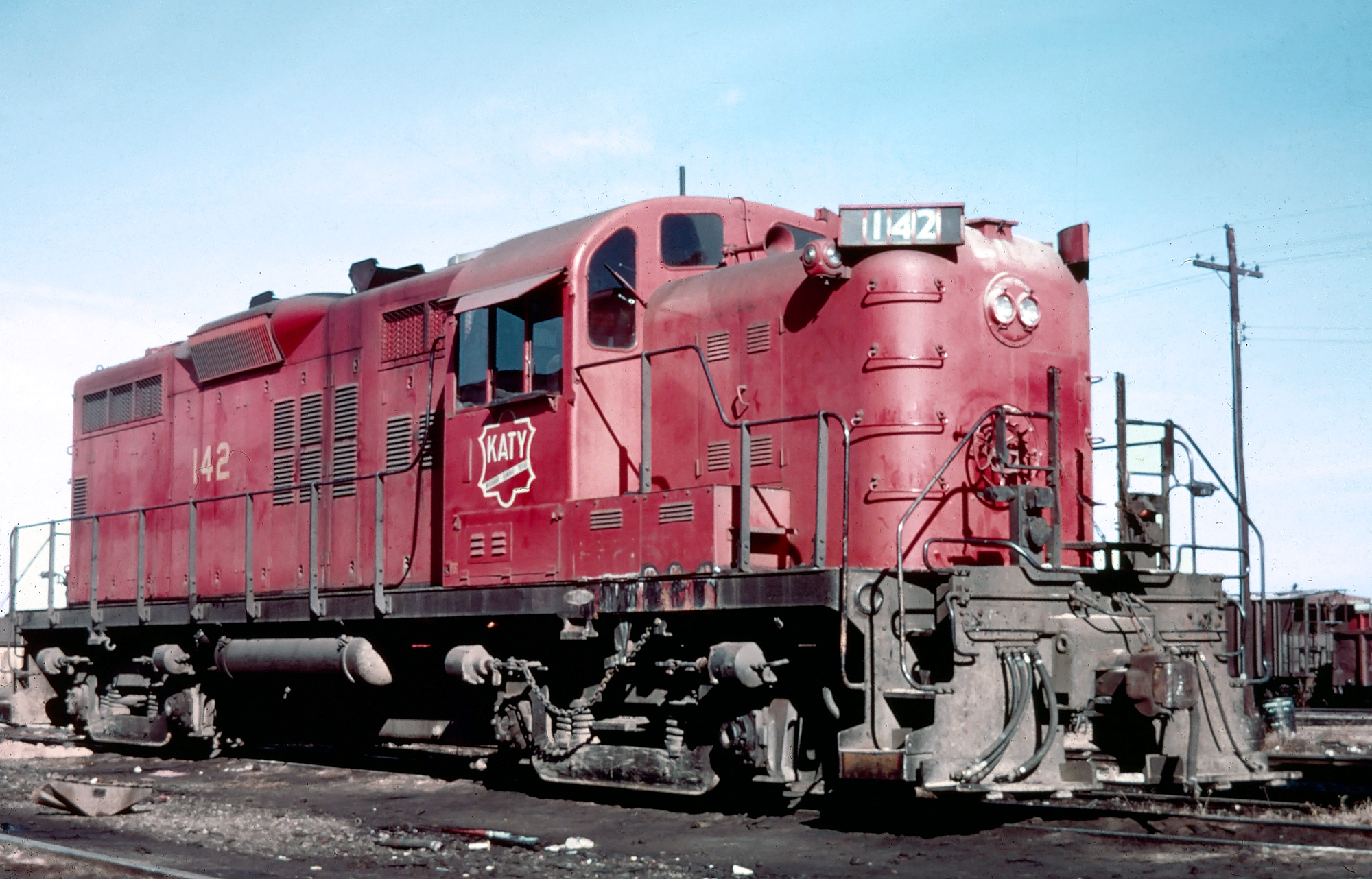 One of Katy's RS3m rebuilds, #142, at Parsons, Kansas, circa 1968. This unit was rebuilt with an EMD 567C in October, 1959, which required a Geep hood to house the engine block. Today, the locomotive operates on the Midland Railway in Baldwin City, Kansas. Mac Owen photo. American-Rails.com collection.

The name was later changed to the Kansas Pacific Railway in 1869 after it had connected Kansas City with Denver, Colorado.

In the following years Kansas would come to have several of our most revered western and granger railroads operating within its borders. 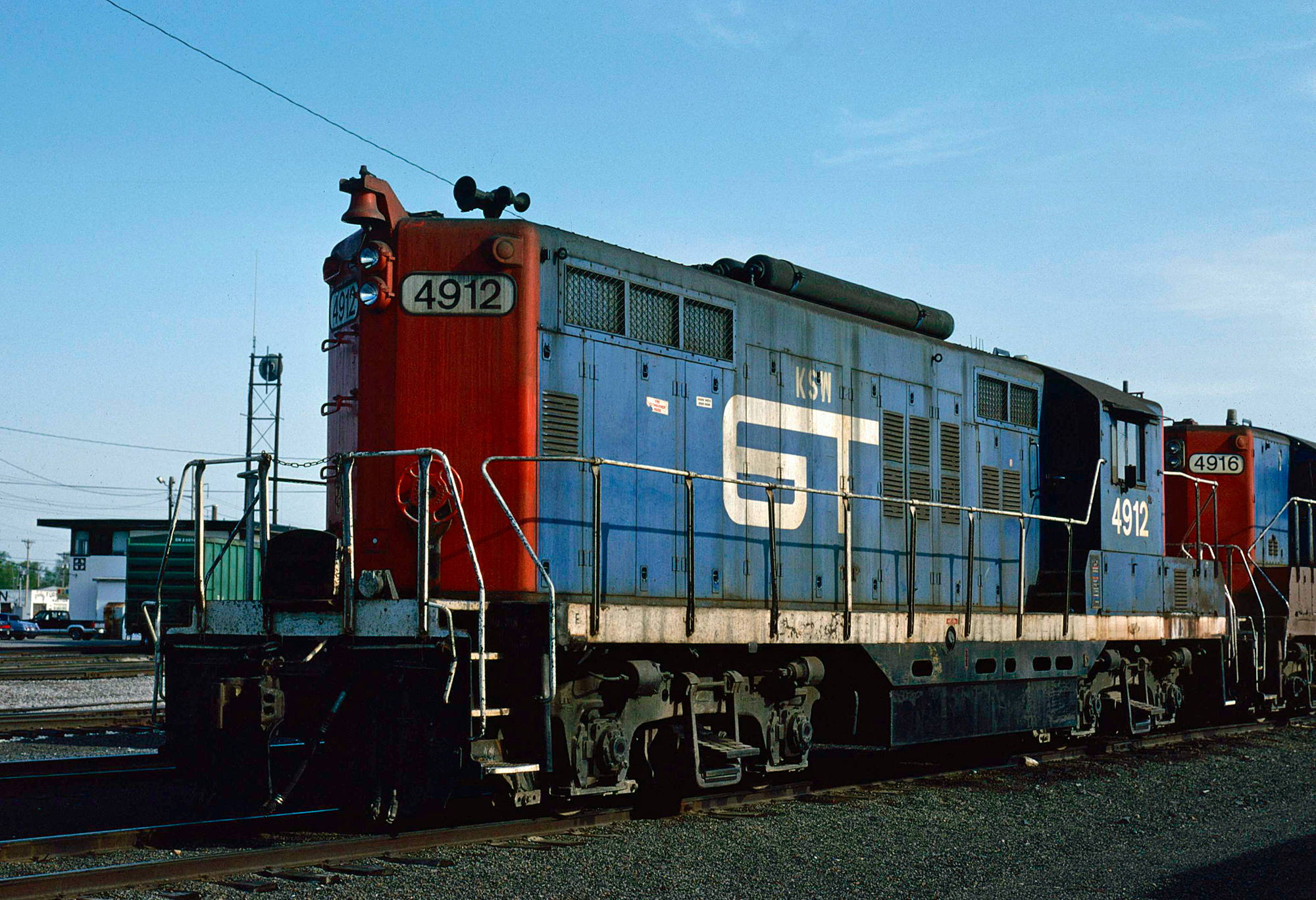 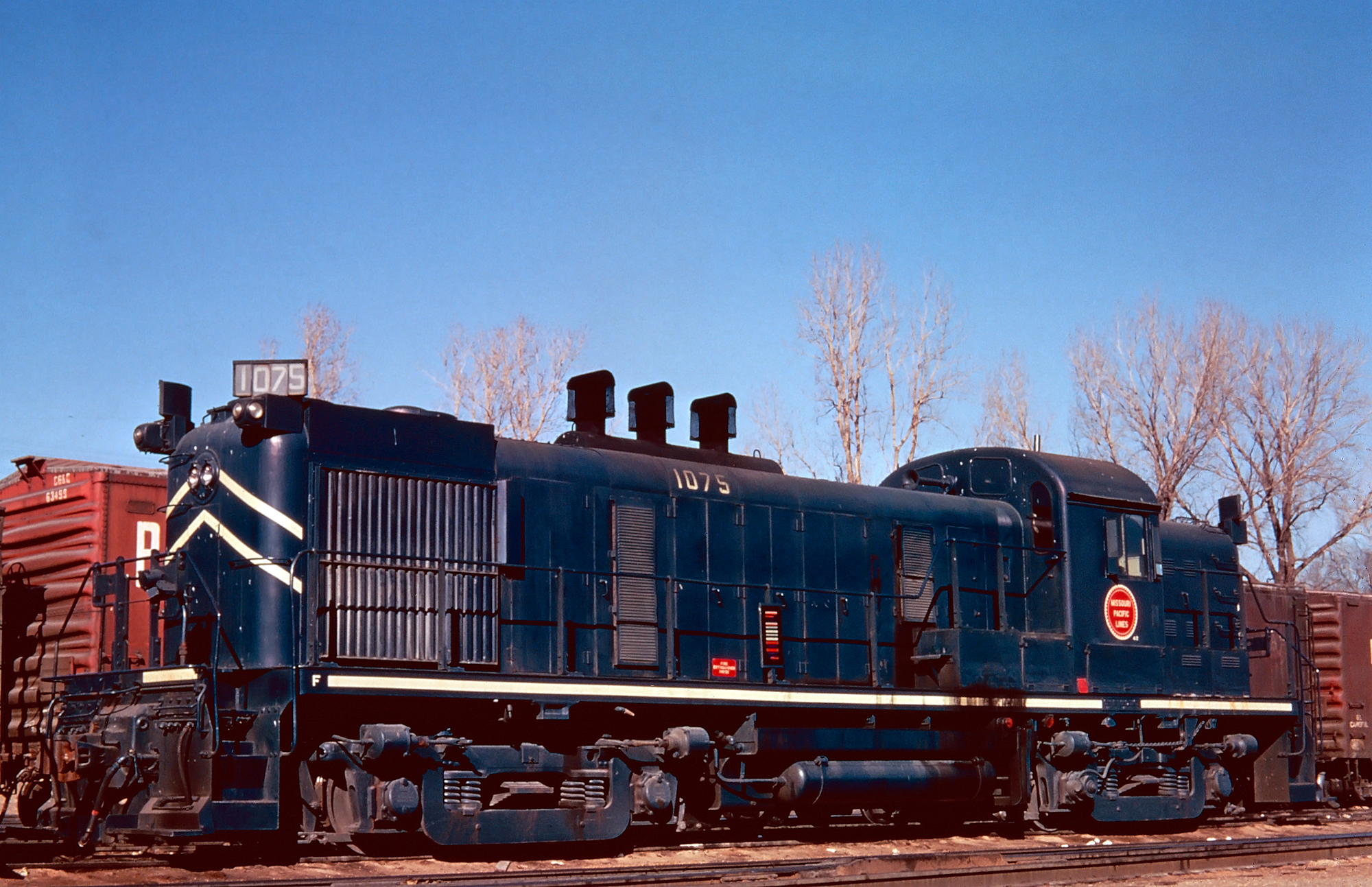 Missouri Pacific RS3m/GP12 #1075 at Coffeyville, Kansas, circa 1969. This was one of several MoPac RS3's rebuilt by the North Little Rock Shops with a 12-cylinder model 567A and reclassified as a "GP12" (sometimes referred to as an RS3m). American-Rails.com collection.

Much of this loss was, again, due to the decline in farms shipping their products by rail although it was also caused simply by overbuilding, a similar issue affecting many granger states (there was just too much supply and not enough demand, particularly following World War II).

For a more in-depth look at Kansas, in terms of its rail mileage over the years please refer to the chart above. 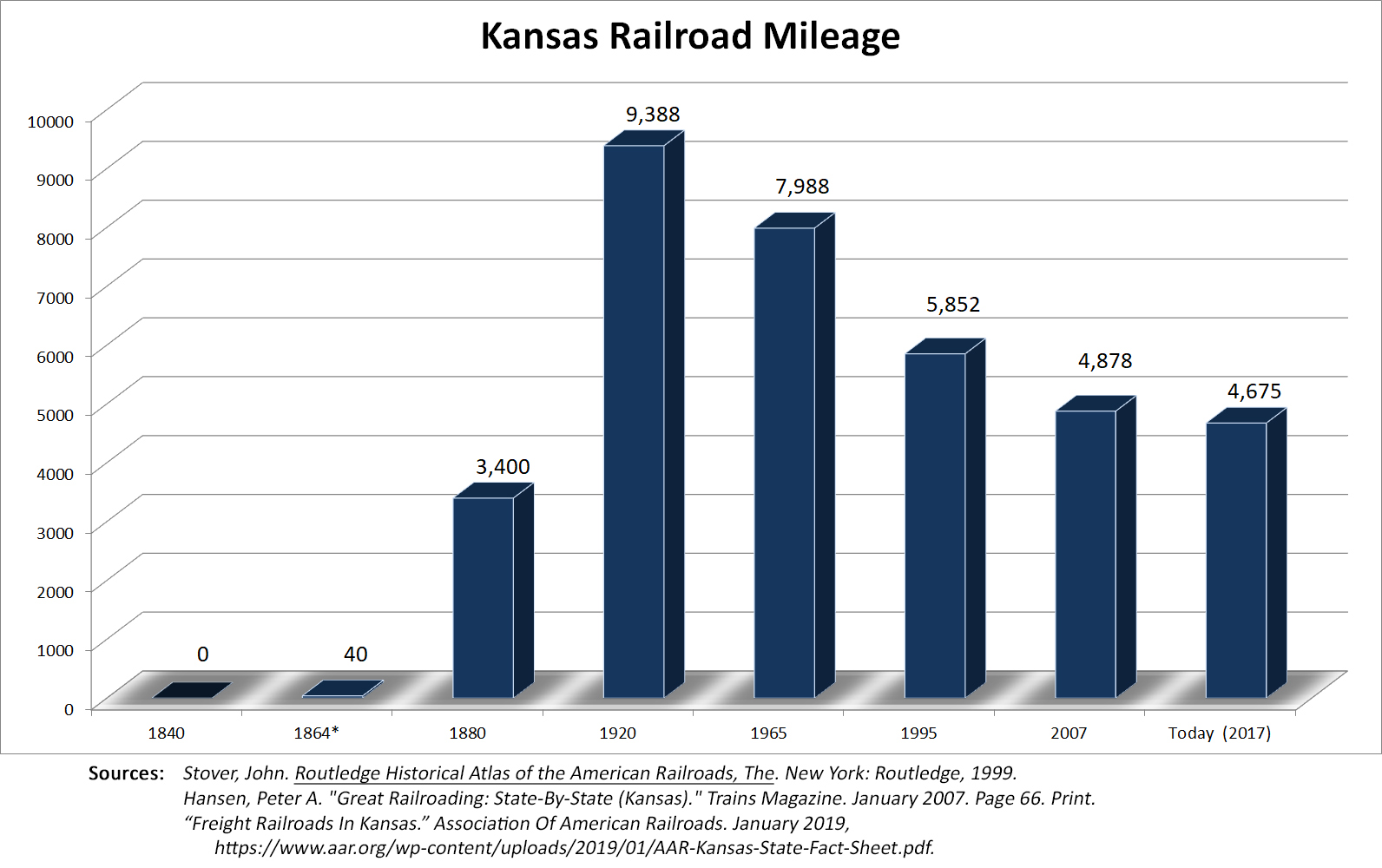 * Kansas's first railroad was the Leavenworth, Pawnee & Western Railroad (LP&W), chartered in 1855.  At the time the region was virtually devoid of settlement and as a result no funding could be secured for its construction.

However, when the Union Pacific was formed in 1862 to build the eastern component of the Transcontinental Railroad, the old LP&W chartered was wrapped up into the new entity whereupon it became known as the Union Pacific Railway, Eastern Division in July, 1863.

It began construction from Kansas City that September and had opened 40 miles to Leavenworth by 1864.  In 1869 it was renamed as the Kansas Pacific Railway and completed into Denver, Colorado the following year.  It went on to become an important artery under the modern Union Pacific.

In years past Kansas was once home to legendary passenger trains such as AT&SF's Super Chief and Union Pacific's City fleet. 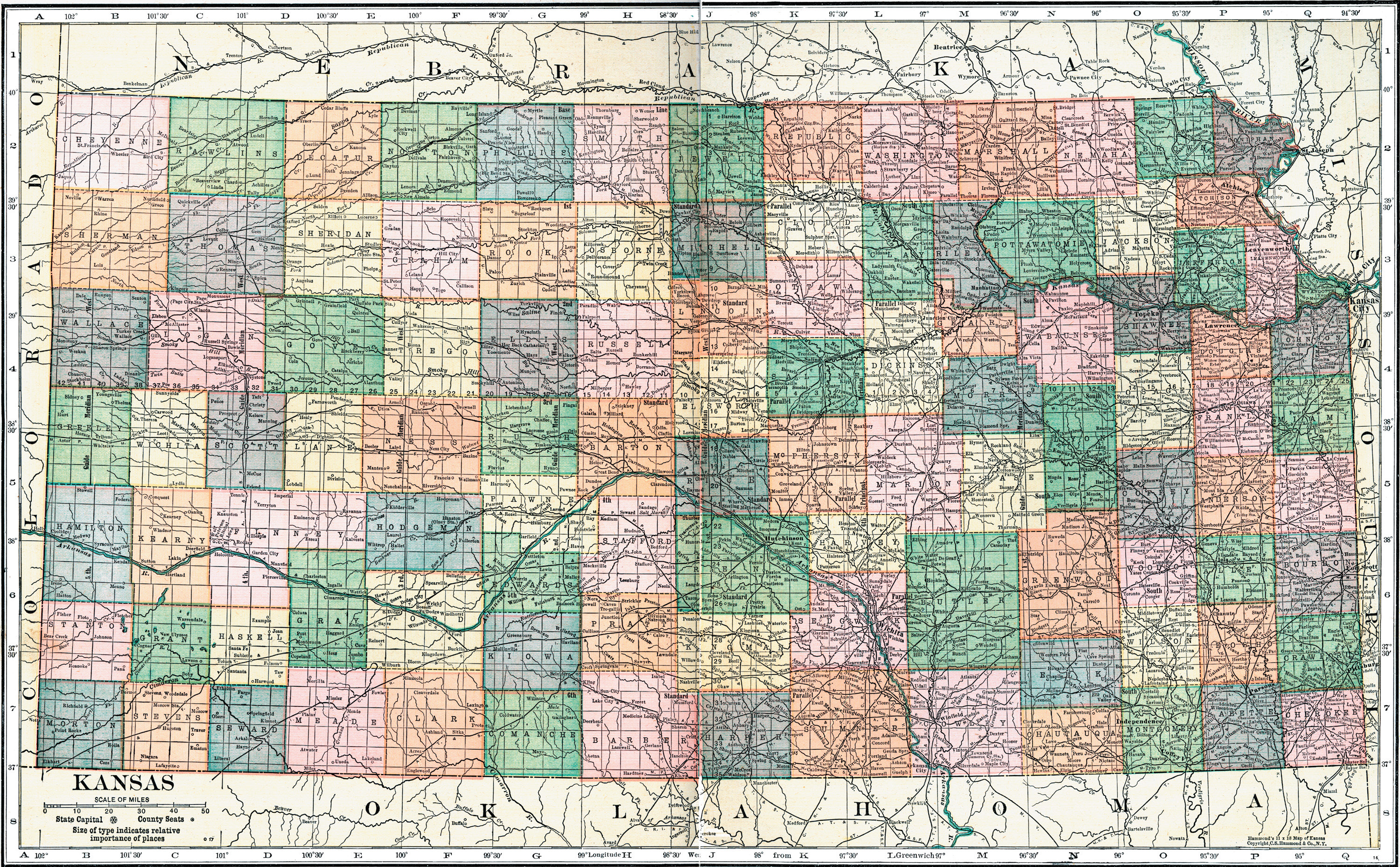 Today, however, passenger operations are managed by Amtrak and include only the Southwest Chief (which stops at Lawrence, Topeka, Newton, Hutchinson, Dodge City, and Garden City) that still operates over much of the same territory s the famous Super Chief.

For a historical look at the Super Chief and City fleet please click here to visit the site's streamliner section. 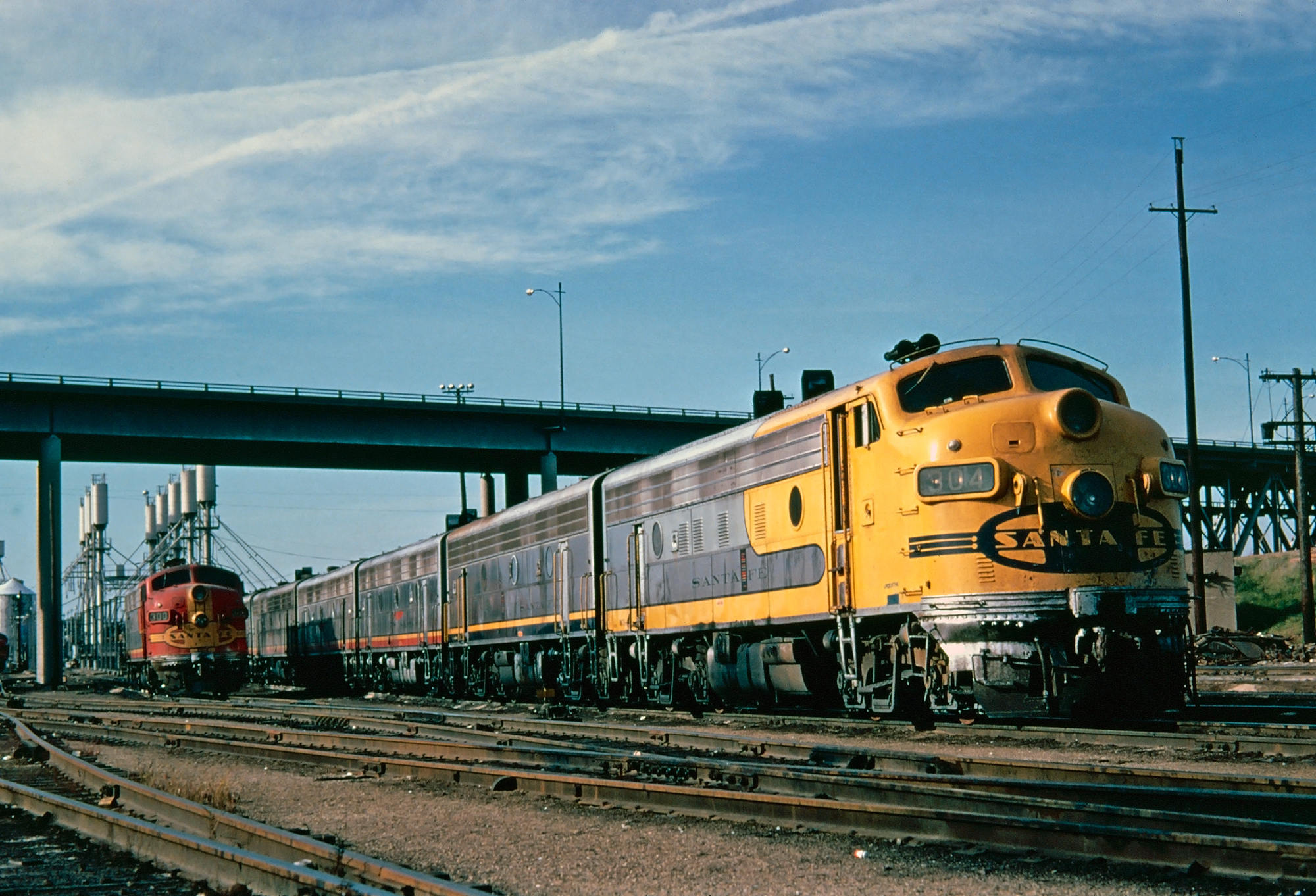 A Santa Fe "Yellowbonnet," F7A #304-L, and other F units layover near the servicing rack at Argentine Yard (Kansas), circa 1973. Also note F7A #300-L in the background. American-Rails.com collection.

Kansas railroads are also home to a number of railroad museums and tourist lines that you may be interested in visiting when in the state.

All in all Kansas has plenty to offer, whether you are a vacationer, railfan, or maybe even a local Jayhawk interested in some sightseeing or something to do!