Louisiana Railroads In "The Pelican State"

Louisiana offer little in the way of mountainous operations and stiff grades, as the state is almost completely flat (saving railroads from the headache of such operations).

Despite this the state enjoyed a robust rail economy featuring more than 5,000 miles of track.

Many of these corridors headed to, or from, New Orleans such as the Southern Railway, Louisville & Nashville, Southern Pacific, Illinois Central, Kansas City Southern, and Gulf, Mobile & Ohio.

However, there were also many agricultural branches and even several logging railroads.  Many were subsequently abandoned the postwar era.

From a railfan perspective this might be a bit visually boring; however, the Pelican State remains an important source of both originating and terminating traffic with the Port of New Orleans and the lucrative petrochemical industry both located there.

Because of this several classic lines tapped into the state, notably wishing to reach New Orleans as it was a vital interchange point and originator of traffic (both passenger and freight).

Today, Louisiana is still served by several Class I railroads (six of the seven) and several short lines allowing for an interesting mix of operations. 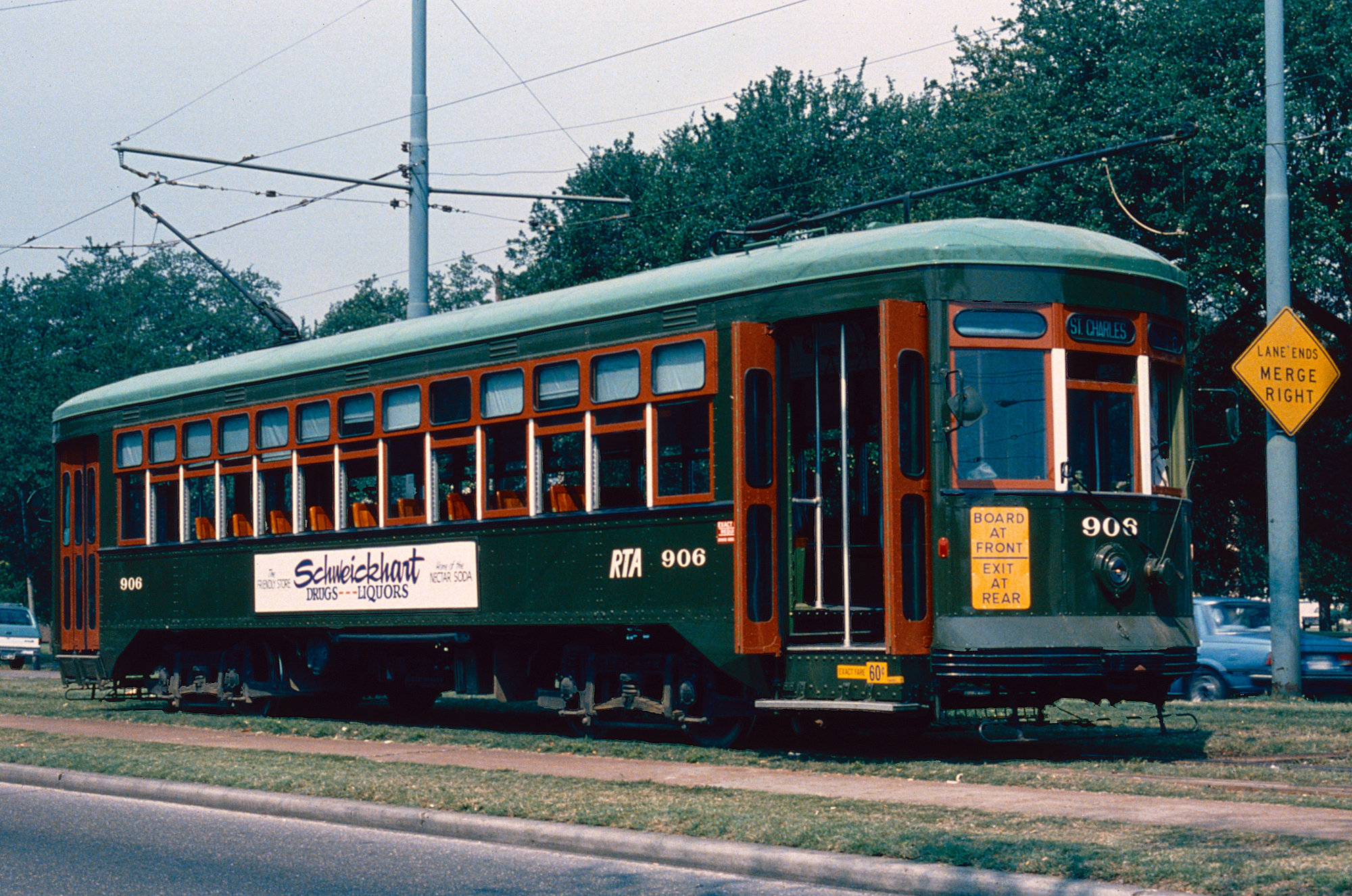 New Orleans Regional Transit Authority (RTA) car #906 is on the the St. Charles Avenue line during the 1980s. The RTA is the oldest streetcar system still in active use with a service history dating back to 1831. This car was part of an order of 73 built by the Perley A. Thomas Car Works of High Point, North Carolina in 1923-1924. American-Rails.com collection.

Louisiana railroads date back to 1830 (just a few years after the Baltimore & Ohio was chartered!) when the Pontchartrain Railroad was chartered, the first railroad west of the Alleghenies.

The railroad was built to connect a small suburb of New Orleans, Faubourg Marigny, with Milneburg a town that sat along Lake Pontchartrain.

Louisiana's rich, fertile soil made the state ideal for agriculture, everything from tobacco to cotton. As a result, railroads arrived early (1830) and expanded rapidly throughout the region over the next century.

The state was primarily served by the Missouri Pacific and Kansas City Southern.  In addition, Southern Pacific's Texas & New Orleans had a presence here, acting as the eastern terminus of SP's fabled "Sunset Route" (Los Angeles - New Orleans) as well as the Illinois Central.

All of Louisiana's key corridors remain active today although large sections of the MP's network throughout the state have been abandoned under successor Union Pacific.

You can also find components of the Illinois Central, SP, Kansas City Southern, and even the Rock Island are removed.

The Rock is an interesting tale; the road had a singular line running south from Little Rock, Arkansas to Eunice, Louisiana where it interchanged with the Missouri Pacific.

Interestingly, Louisiana once even contained a considerable web of logging railroads, all abandoned long ago, of course.

However, if you know where to look you can still trace some segments of these old operations, many of which were privately owned.

The railroad was only about five miles in length and was opened a little over a year after it was chartered on April 14, 1831.

At the time of the line's construction the lake saw a significant amount of imported goods arriving to New Orleans and as such allowed it to be quite profitable operating as a terminal railroad (as well as moving passengers). 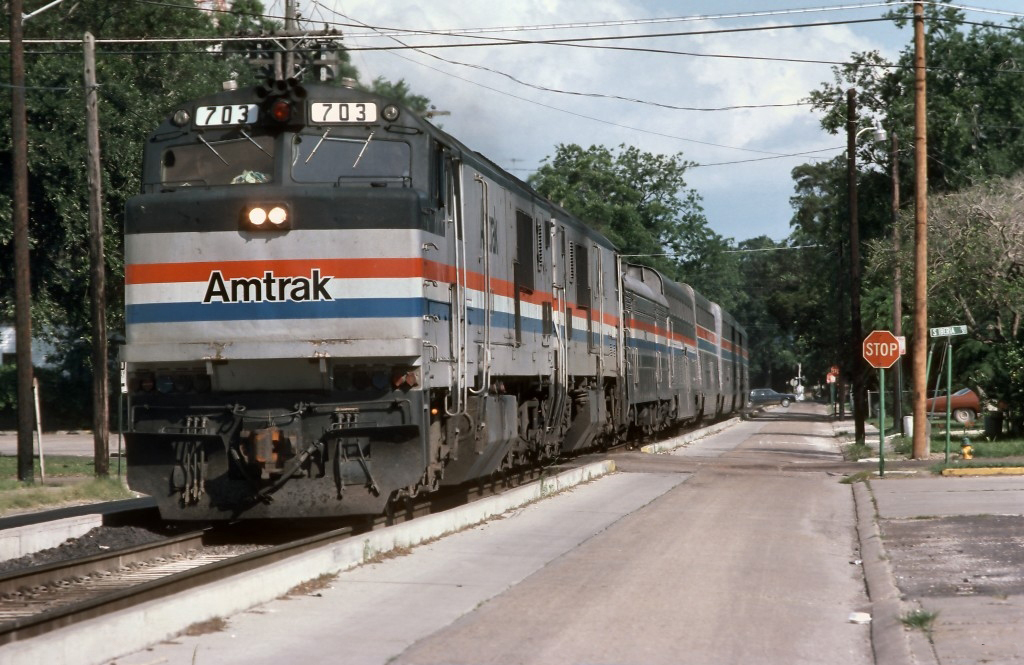 Amtrak P30CH #703 has the eastbound "Sunset Limited" running through the streets of New Iberia, Louisiana during July of 1982. Gary Morris photo.

By the late 19th century the Pontchartrain Railroad lost most of its freight traffic after ships became too large to navigate into the lake.

During the line's last three decades or so it was mostly used as a tourist attraction until it was completely abandoned in 1935, 105 years after it was originally chartered. 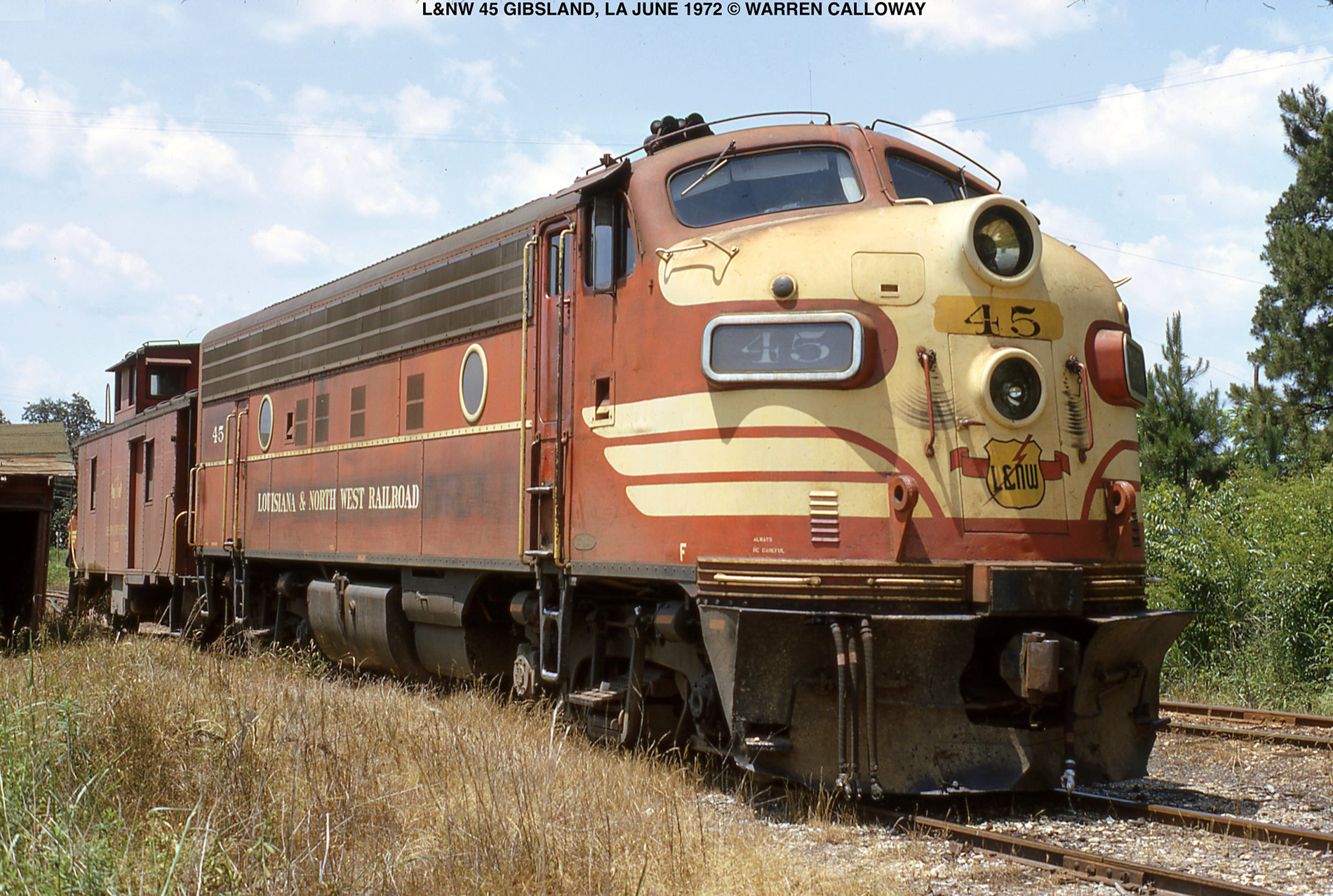 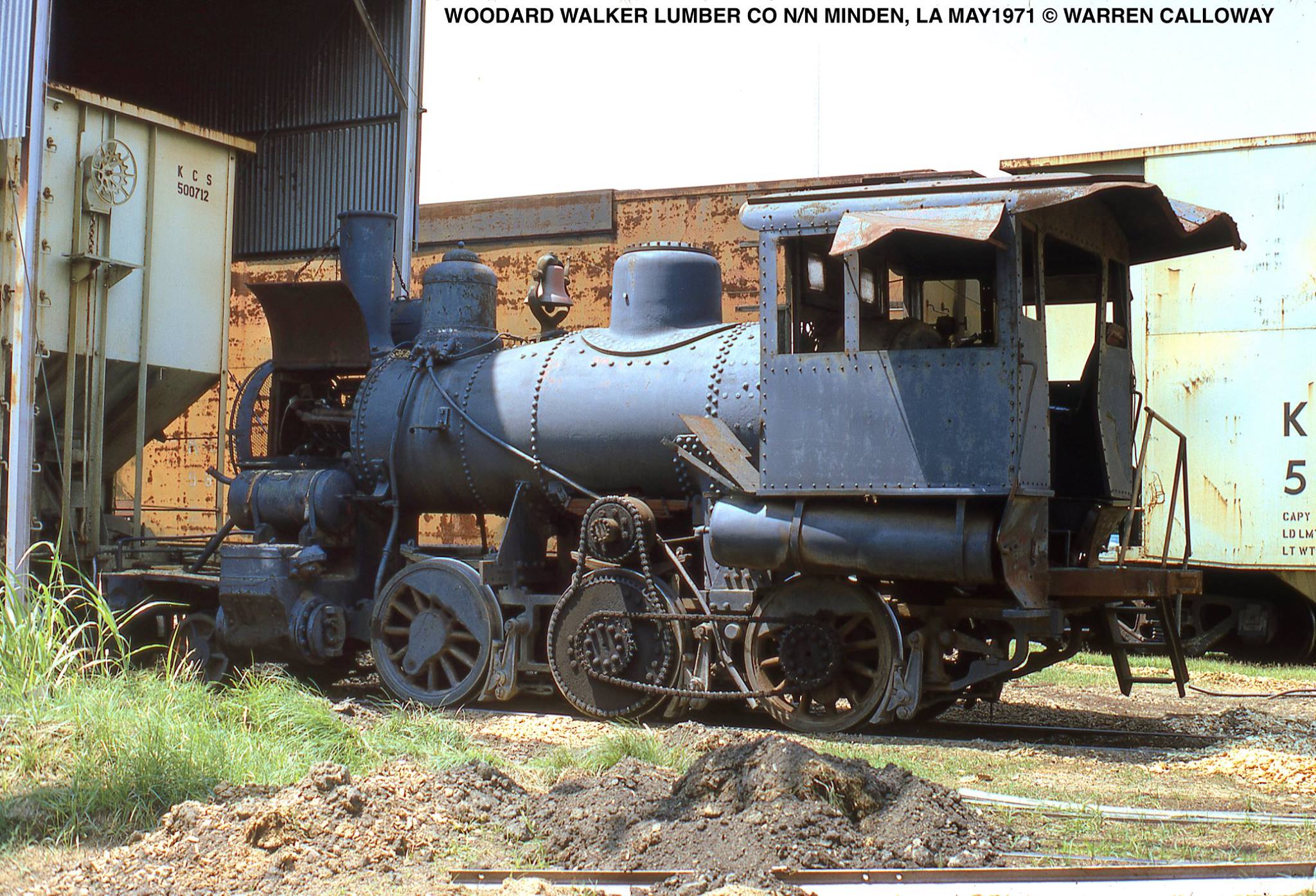 This interesting contraption was found at the Woodard-Walker Lumber Company in Minden, Louisiana during May, 1971. Workers had converted a former 2-6-0 into a chain-driven, diesel-powered switcher utilizing a Ford V-8 engine. Warren Calloway photo.

For a more in-depth look at Louisiana in terms of its rail mileage please have a look at the chart below.

At one time, the Pelican State carried a rail network that totaled over 5,000 miles although today that number has dropped under 3,000 miles. 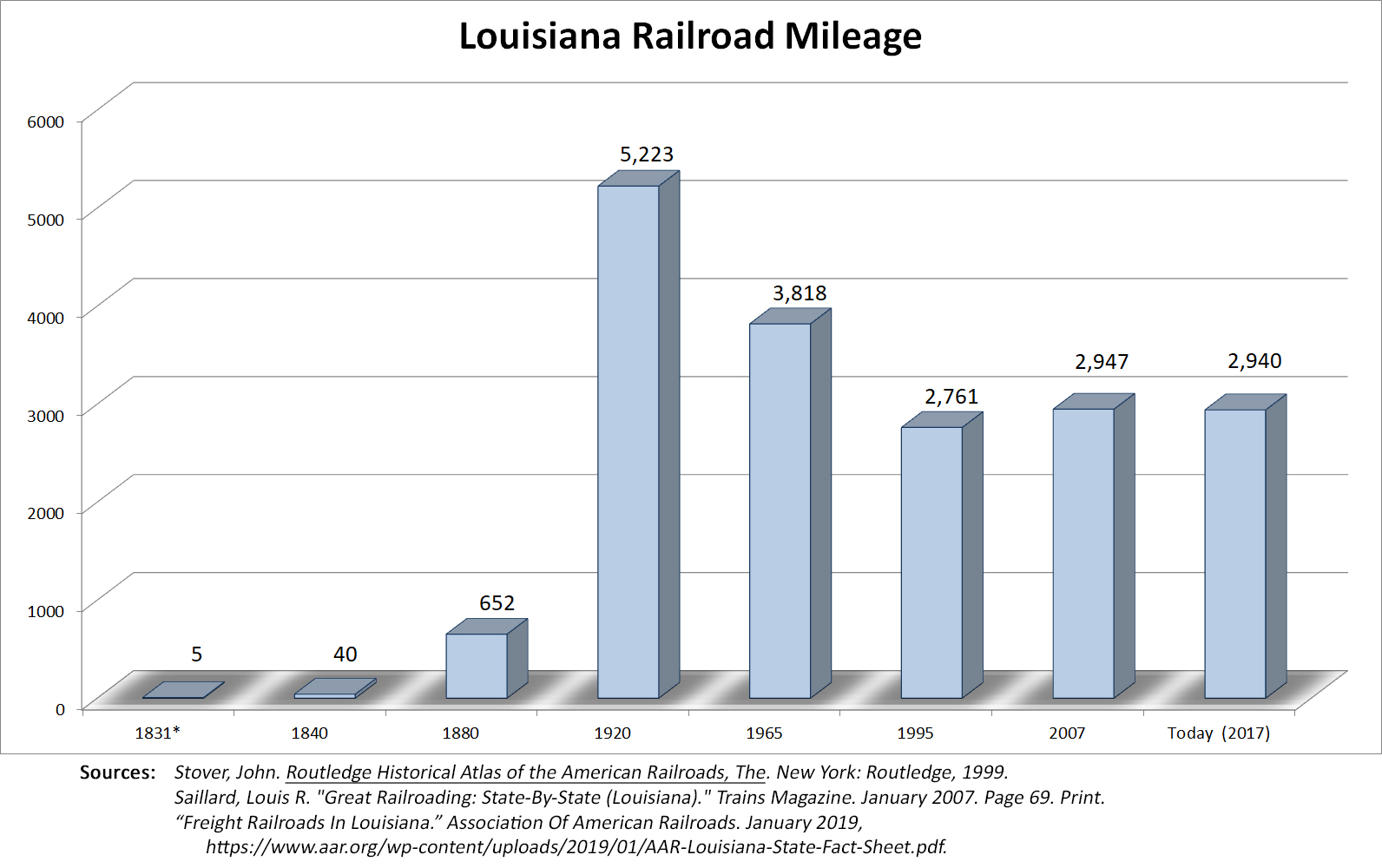 * Louisiana's first railroad was the Pontchartrain Railroad, chartered in 1830 as the first chartered west of the Allegheny Mountains to link New Orleans with Lake Pontchartrain.  It opened in the spring of 1831.

Since the 1920s (when mileage peaked across the country) the state has lost about 44% of its rail infrastructure.

This is actually about average (at least in terms of the numbers) as many states have seen similar declines over the same time period with many of the abandonments coming between the 1960s and 1980s. 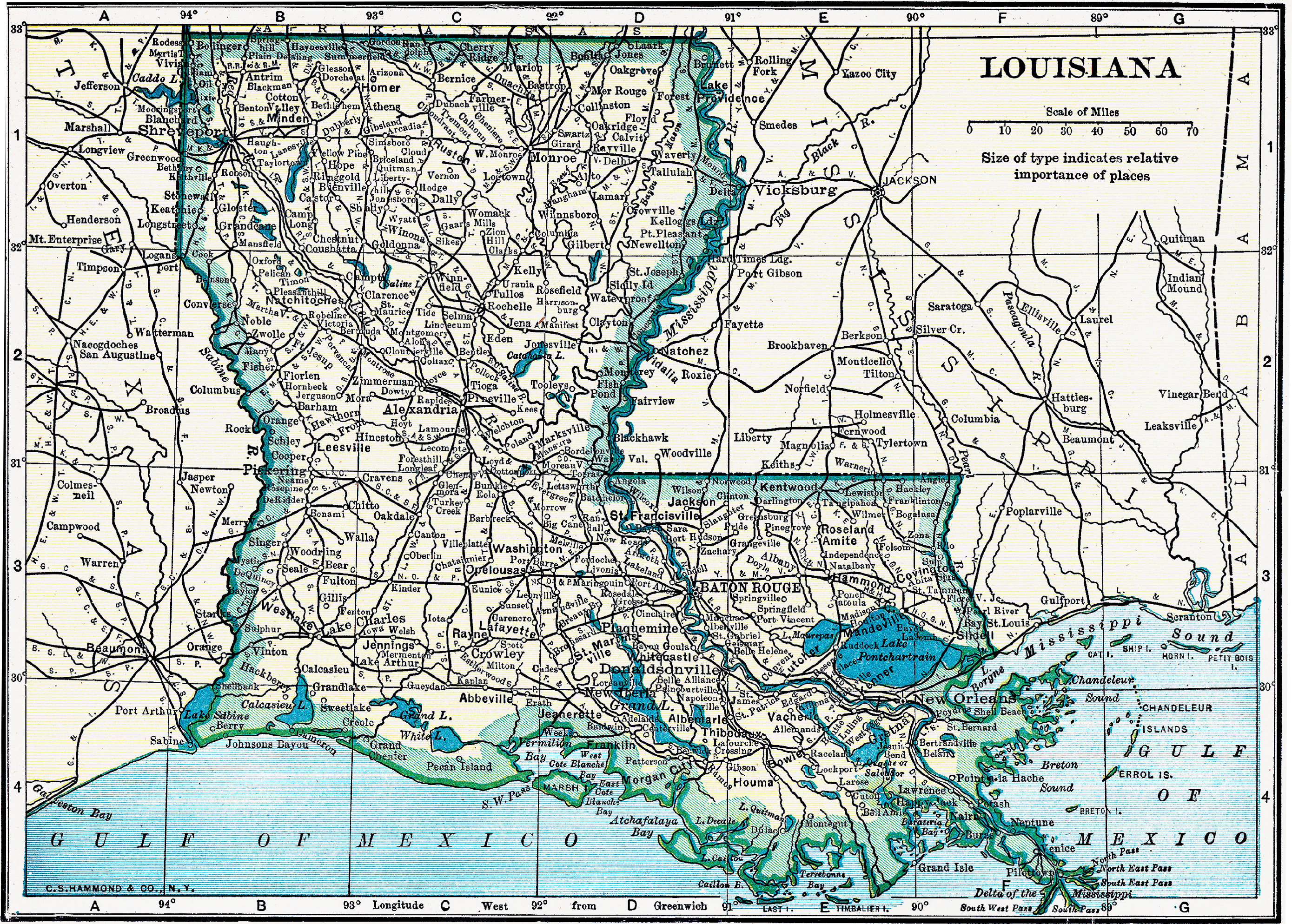 A Louisiana railroad map from 1919 showing the state's peak mileage. Note the numerous lines heading in all directions away from New Orleans. Author's collection.

To learn more about some of the classic "streamliners" that operated through Louisiana please click here. This page at the site highlights many of these trains, including all of those mentioned above. 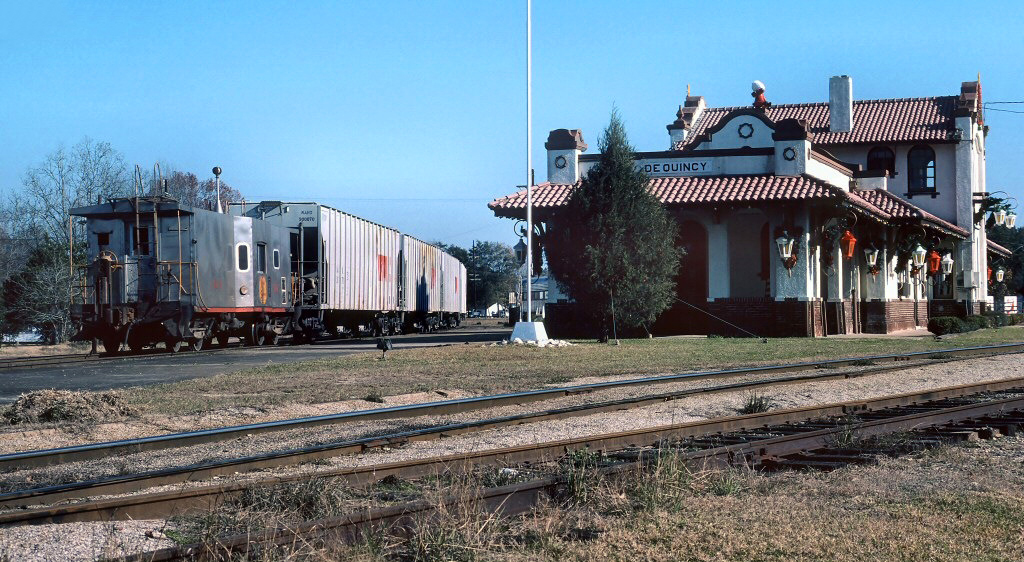 With a stainless-steel caboose bringing up the rear a Kansas City Southern freight heads northbound past the depot in DeQuincy, Louisiana during December of 1985. Gary Morris photo.

Freight and passenger railroads aside, the state is also home to just a few railroad museums (and, unfortunately, no tourist/excursion trains) which include the DeQuincy Railroad Museum, Old Hickory Railroad, and Southern Forest Heritage Museum.

Lastly, for more information about the state's railroad history please visit AbandonedRails.com, a website which highlights abandoned rail lines found around the country.

All in all, while Louisiana is rather flat and offers little to see visually, railroads in the Pelican State has plenty to see, whether you are a vacationer, railfan, or just a local, perhaps interested in some sightseeing or something to do!