During the first half of the 20th century in particular the Southern Pacific railroad was a legend within its home state, particularly for the top-level services it offered the public with its passenger trains.

The company was a top choice of Hollywood's elite with trains like the Sunset Limited, Daylights, Golden State, Argonaut, and numerous others.

Another of these was the Lark, a train initiated by the SP in the early 1940s to accommodate business travelers or others wishing to travel between Los Angeles and Oakland, and arriving for the early morning.

It was an all-Pullman affair and just like its other famous trains provided a high level of service that its travelers had come to expect.

The train remained a successful run for many years but the onset of jetliners and new interstates eventually caused the train's downfall and by the late 1960s the Southern Pacific had discontinued the train.

Photographer Drew Jacksich was on the train's last run in 1968 and a few of his images from that trip are featured on this page. 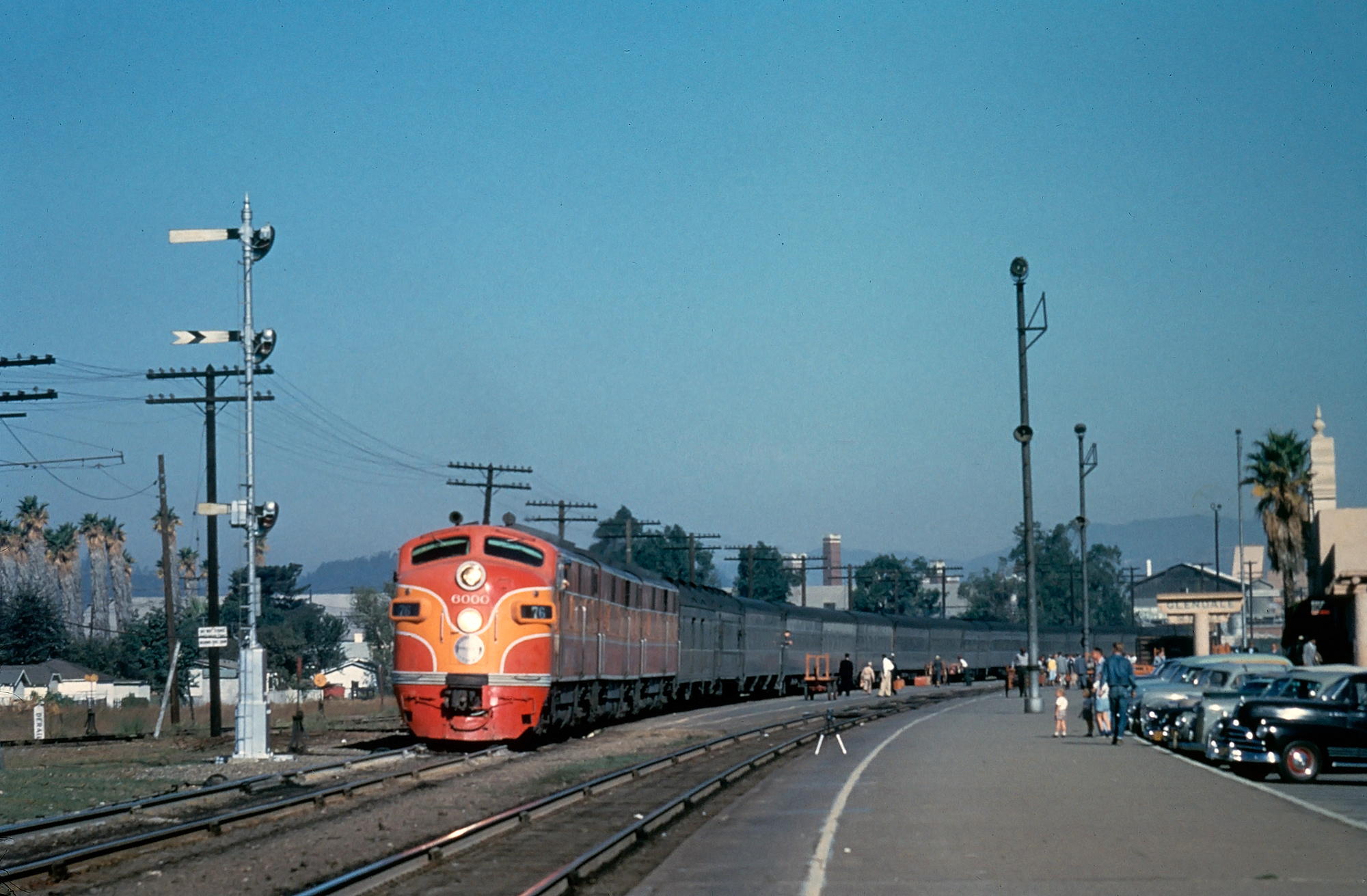 A set of handsome Southern Pacific E7's, led by #6000, have arrived at Glendale, California with the southbound "Lark," circa 1955. Gordon Glattenberg photo. American-Rails.com collection.

In late March, 1937 the Espee unveiled its first streamliner, the wildly popular Daylight between Los Angeles and San Francisco.

The folks of California were completely enamored by the new train, which spared no expense in offering the public a world-class streamliner.

Because of this, it quickly became a favorite among the state's elite despite the fact that it was only a regional dayliner that completed a run in just 10 hours.

The train would spawn an entire fleet of Daylights with names like the Shasta Daylight, Sacramento Daylight, and San Joaquin Daylight. Another reason for the trains' success was its paint scheme, designed by SP's own Charles Eggleston's who came up with a legendary blend of red, orange, and black which was perfectly suited for the environment in which they operated.

With the success of these trains the Southern Pacific felt that they needed an overnight version to complement the others.

So, in May, 1940 the railroad went back to Pullman-Standard for more cars, which helped unveil more Daylights as well as the new streamlined Lark. 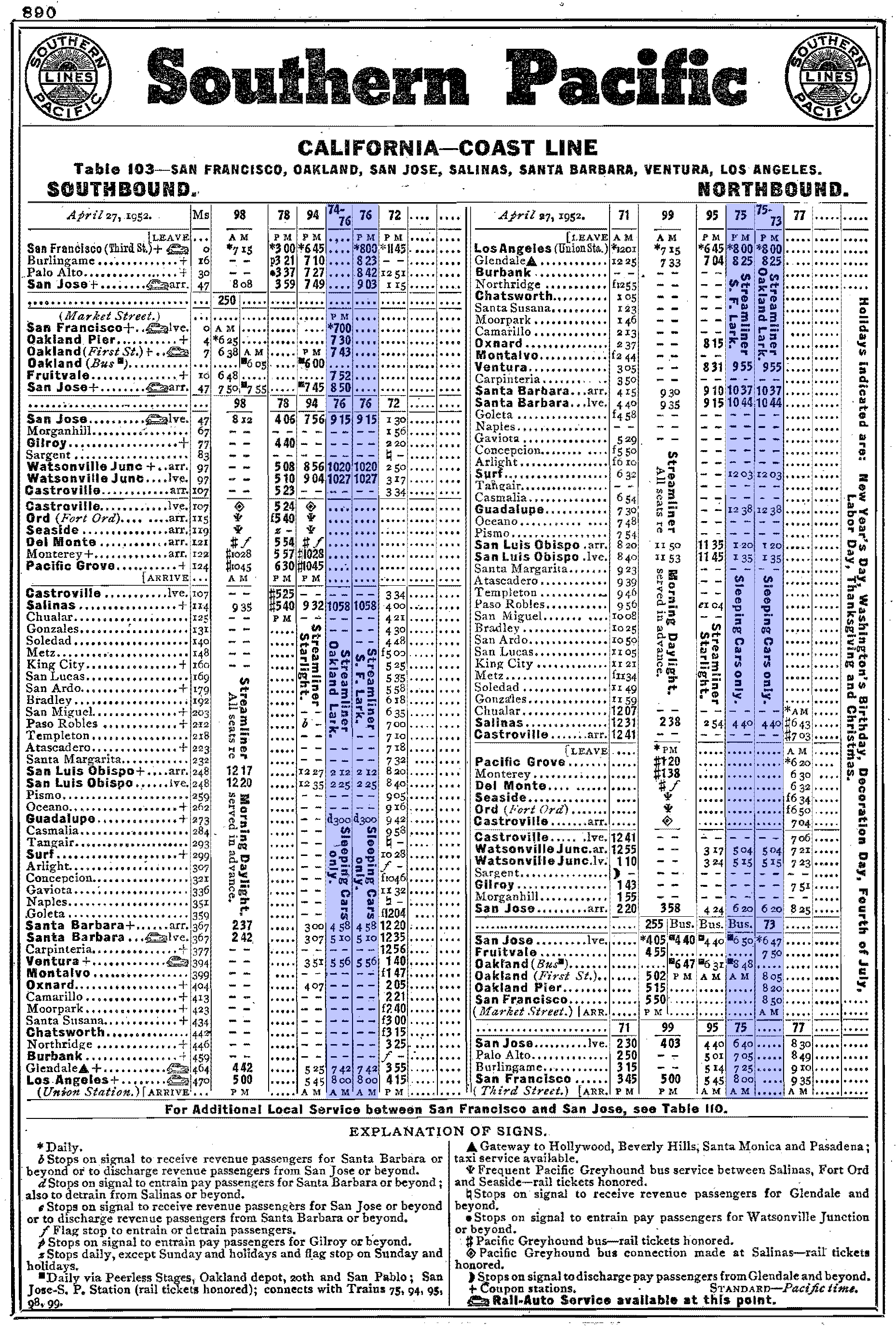 The train was just as elaborate as its daytime counterparts offering high-class services as an all-Pullman and nearly all-sleeper overnight run up and down the Coast Line between L.A. and San Francisco. Of the original 18-car consist all but five of the cars were sleepers.

Two of these cars were head end equipment and included a modernized heavyweight baggage and baggage-RPO (Railway Post Office). The other "three" included a unique semi-articulated set that was used as a lounging area for passengers when not sleeping or in their room. 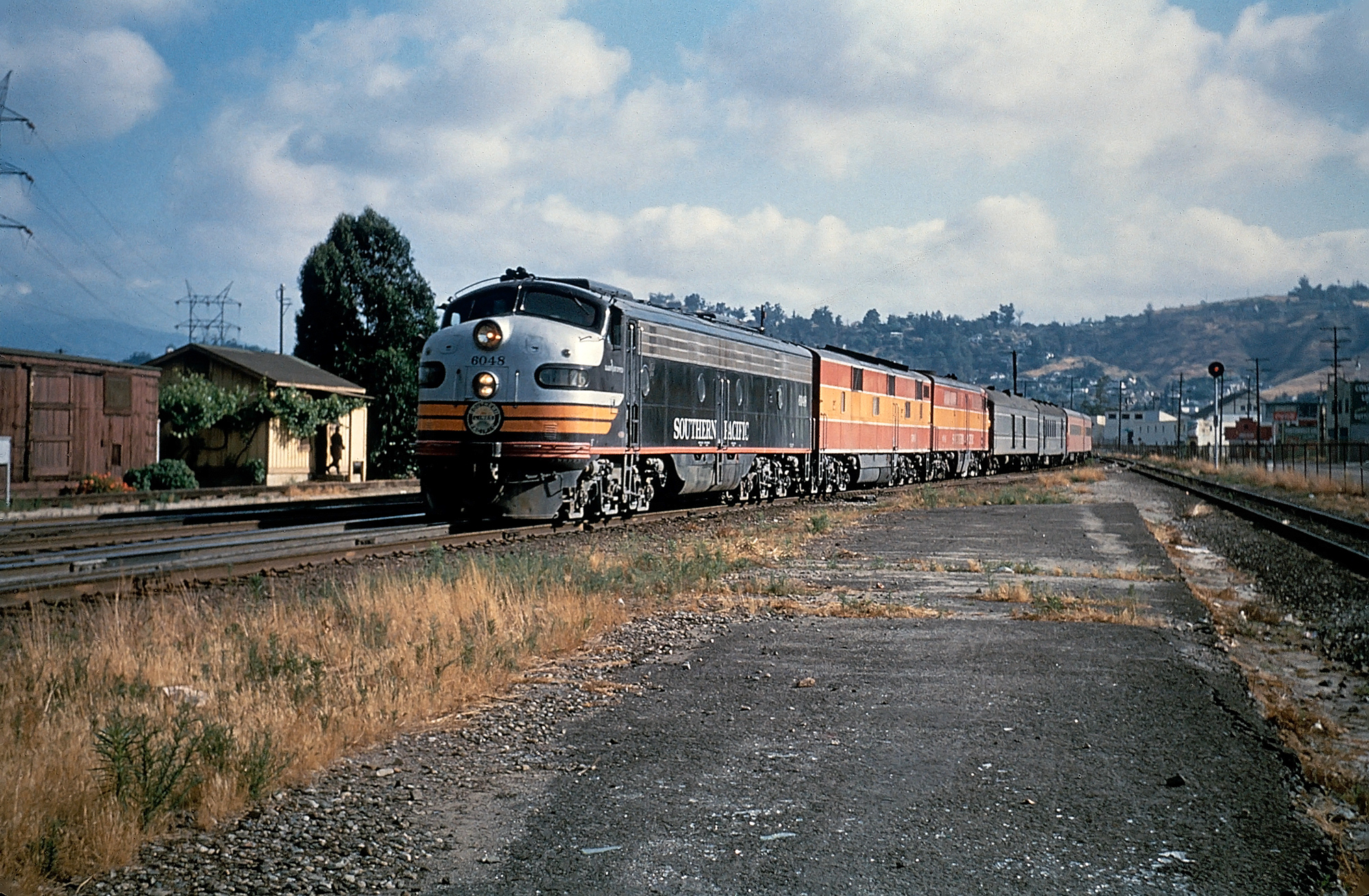 An interesting assortment of Southern Pacific power, including E9A #6048, an E7B, and PA-2, have arrived in Los Angeles with train #76, the southbound "Lark," circa 1956. Gordon Glattenberg photo. American-Rails.com collection.

Specifically, Southern Pacific called this set of cars a Lark Club diner-tavern-lounge and offered not only incredible relaxation but also fine dining, the best the railroad and Pullman had to offer.

For power the train featured one of the SP's classic Class GS-4 4-8-4 steam locomotives adorned in the railroad's noted Daylight livery.

However, the cars were somewhat different. In a creative twist the Espee painted the equipment a two-tone grey (similar to the New York Central's "Great Steel Fleet" livery) with white pinstriping to denote it as an overnight run.

Officially, the Lark hit the rails on July 1910, 1941 departing San Francisco's Third Street Station at 9 P.M. and arriving at Los Angeles Union Passenger Terminal (LAUPT) by 8:30 A.M. the following morning, perfect for anyone on a business trip that had to be at either city at that time of day.

In total the train could handle 228 patrons and because of the corridor it served was typically always full. The train carried the unique status of being the only all-Pullman, all-bedroom streamliner to operate entirely in one state.

Of course, as aforementioned it was capable of doing so successfully due to the region it served. Despite this, however, the train fell on tough times not long after World War II had ended.

During this time ridership was relatively good but SP offered so many different Daylight services up and down California that there simply was not enough ridership to support them all. 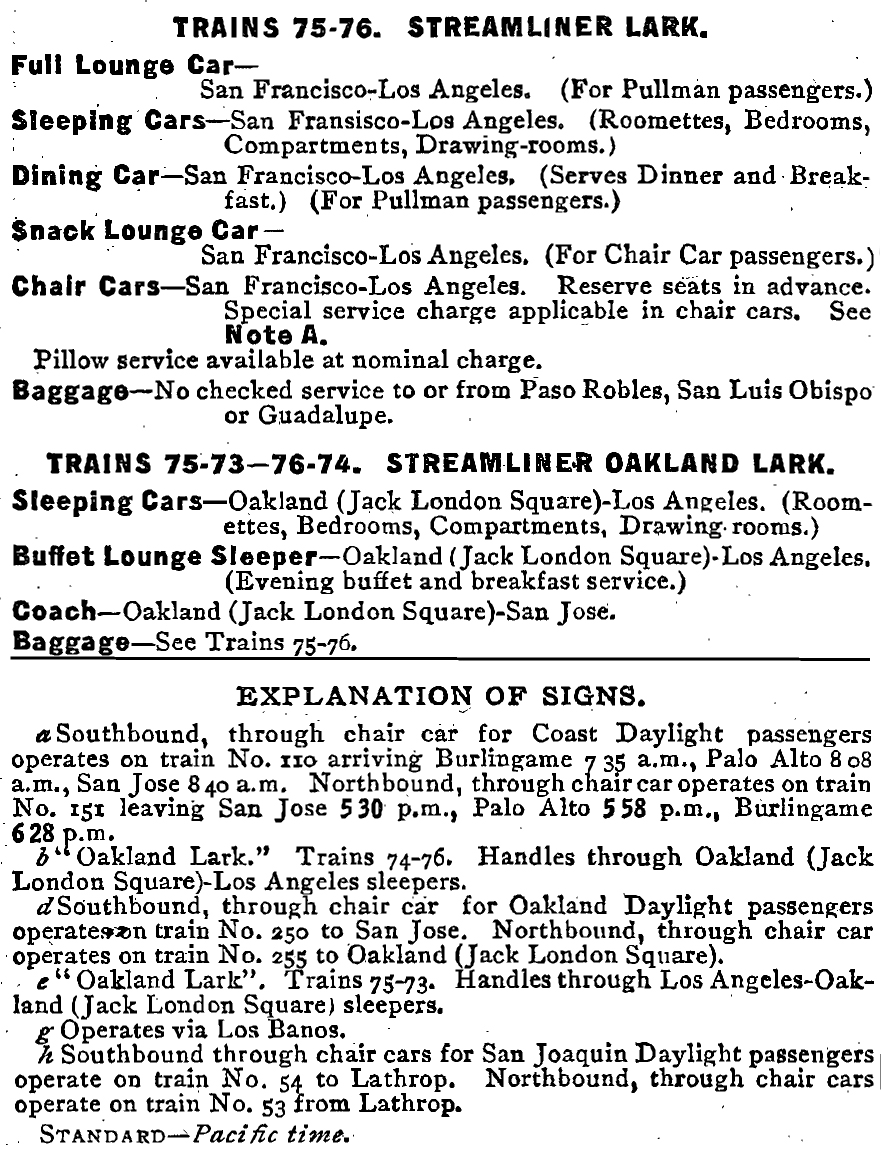 For instance, in the early 1940s the Noon Daylight was discontinued due to the fact that it ran along the same corridor as the Morning Daylight at roughly the same time of day. 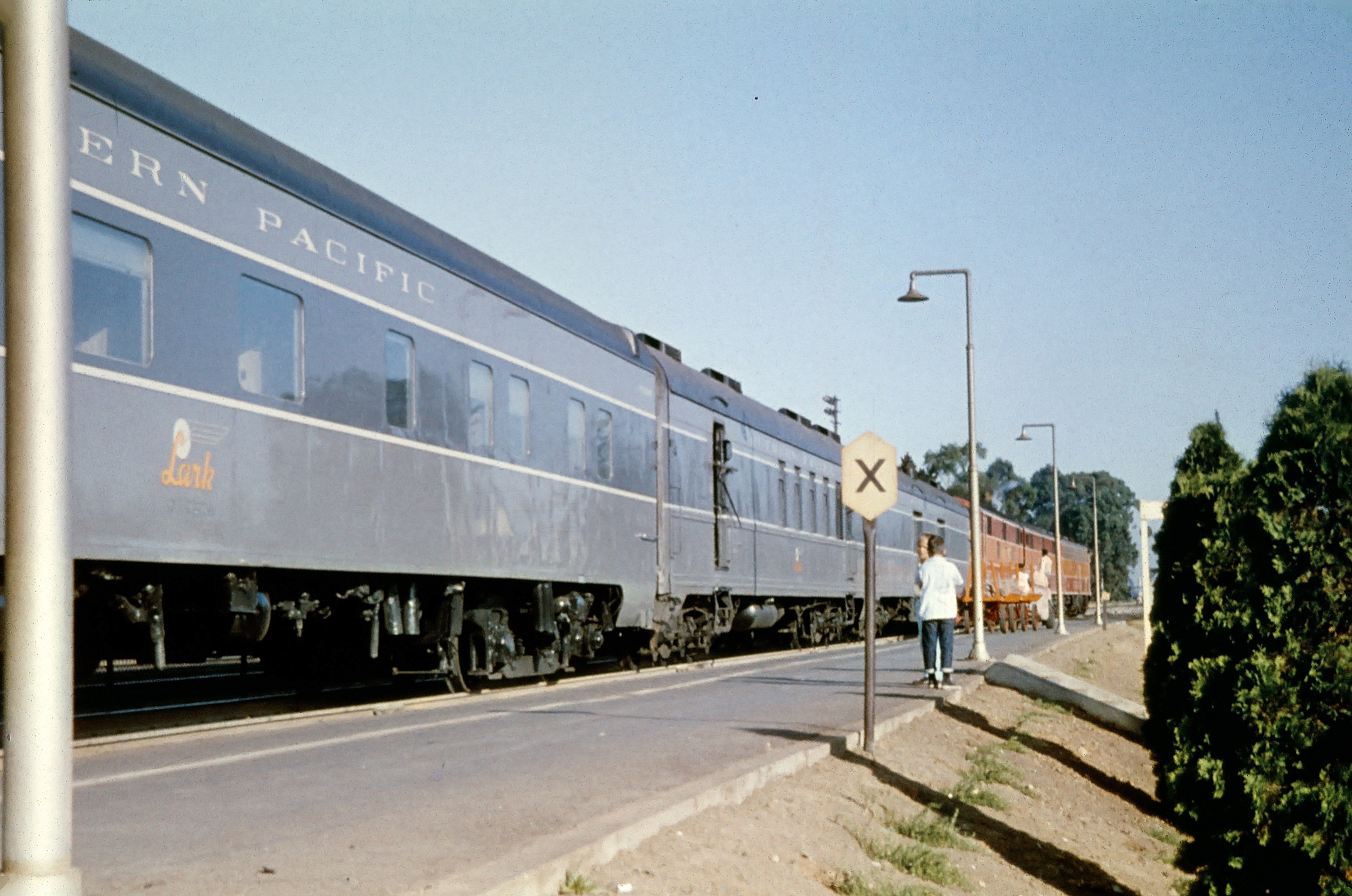 In 1957 the Lark lost its all-Pullman status when it was combined with the Starlight, which operated the same overnight corridor but as an all-coach affair. Reductions for the train continued through the 1960s as the train became smaller and smaller.

To make matters worse, during this time the Southern Pacific had lost virtually all interest in passenger operations, a stark contrast to just 20 or so years earlier when it was one of the pioneering companies for streamliner service.

Finally, the railroad pulled the plug on the train in 1968 as it made its final run in April of that year. During this final days a typical consist of the train included a single sleeper, a snack car, two reclining seat coaches, and a baggage; a far cry from when it debuted in 1941.