For being such a small line the Lake Erie, Franklin & Clarion Railroad (reporting marks, LEF) became somewhat well known in its later years as numerous freight equipment from boxcars to hoppers advertised the company's name and logo.

The LEF&C was based in Clarion, Pennsylvania and was first conceived in the late 19th century by lumber interests.

However, it wasn't long after the railroad opened that it found itself depending on the movement of coal, which was always a very important source of traffic for the company.

Over the years the short line survived on a mix of freight even during its later years. However, with the eventual loss of coal the railroad found itself struggling to make ends meet.

Finally, after nearly a century of service it called it quits in the early 1990s. Today, if one is lucky you can still find LEF&C-painted equipment in service, particularly east of the Mississippi. 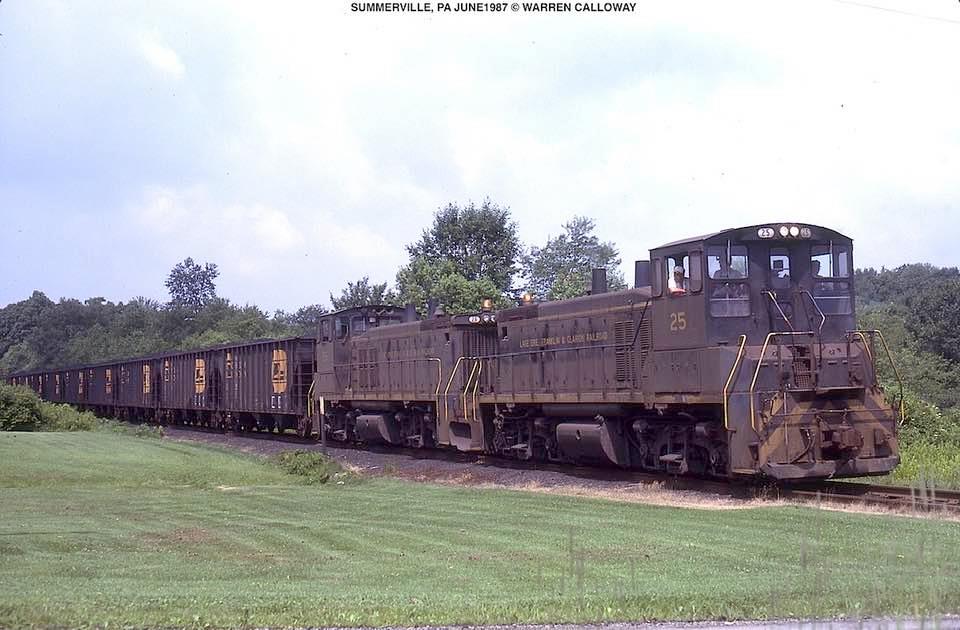 Interestingly, at one time prior to the creation of the LEF&C the small town of Clarion, which lays along a river by the same name did have rail service, the narrow-gauge Emlenton, Shippenville, & Clarion Railroad.

The ES&C was an expensive proposition with heavy grades, tight curves, and many trestles which was chartered in June 1875, connecting Clarion with Knox (where it interchanged with the Buffalo, Rochester & Pittsburgh) two years later in the spring of 1877.

After a decade or so of service the roughly 10-mile line needed a heavier bridge crossing the Clarion River.

However, the town was unwilling to finance the project and as a result lost its only major transportation artery outside of the river.

As early as 1895 the town was mulling the idea of chartering and financing its own railroad, doing some preliminary surveying for a route between Clarion and Summerville.

Construction, however, did not begin for a few more years until 1903. By August 27, 1904 the line was opened, a distance of 15 miles and a connection with the Pennsylvania Railroad at Summerville as well as an interchange with the New York Central at Clarion. 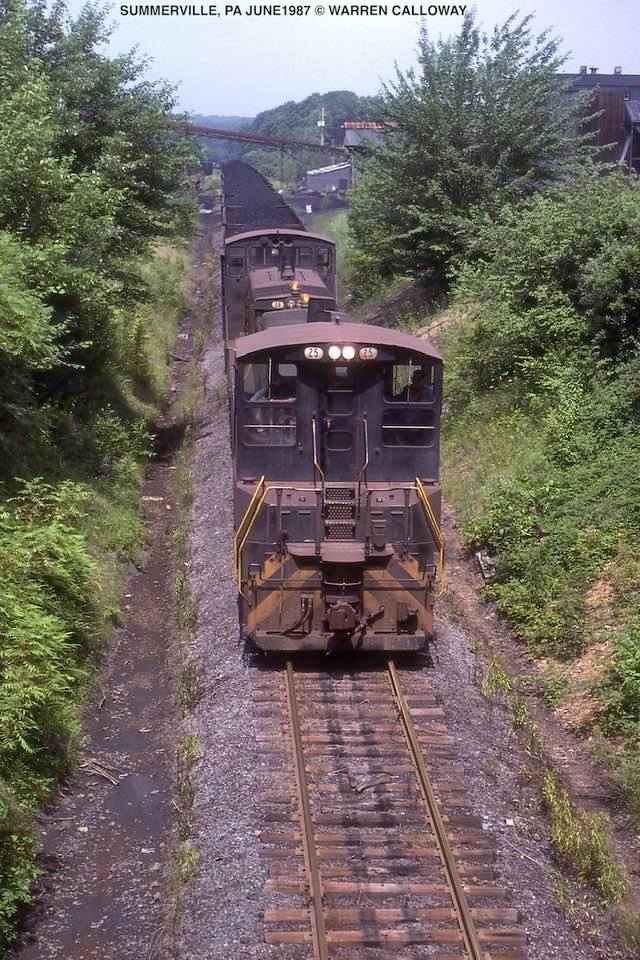 The same train as seen above. Warren Calloway photo.

The CS&P also built a four-mile branch from the main line at Strattonville (where it served a sawmill there) to Mill Creek. This branch provided the railroad with significant freight from raw logs (virgin pine, hemlock, and various hardwoods) to finished lumber.

Because of the route's shoddy construction, tight curves, and tough grades it utilized geared Shays to move logs down to the mill. 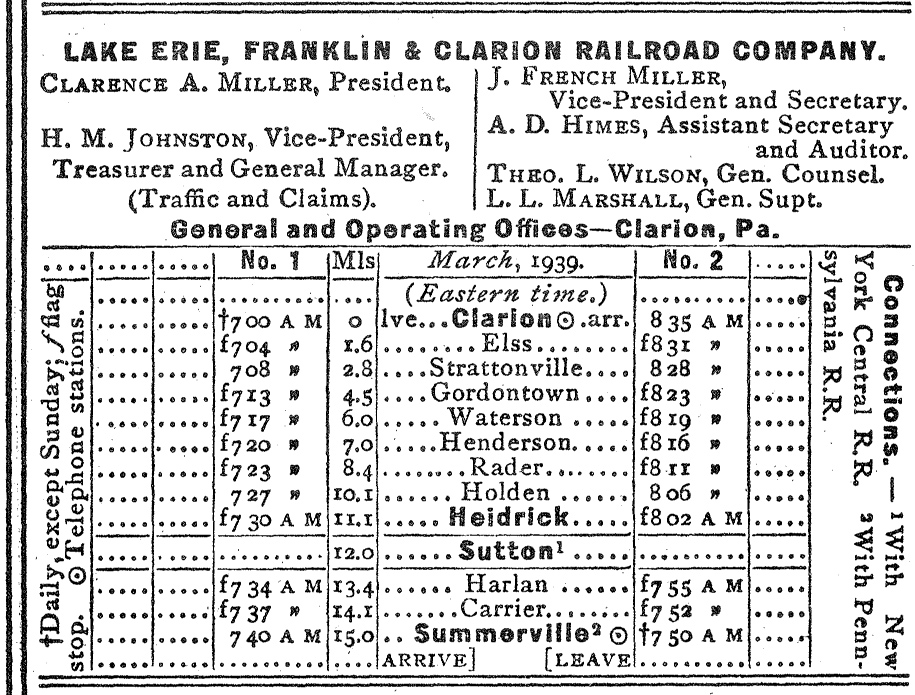 At the same time the route was opened it again changed names as the Pittsburgh, Summerville & Clarion. On December 31, 1910 the PS&C was acquired by Charles Miller through his small Pennsylvania Southern Railroad.

In 1912 yet another name change occurred as the Pittsburgh, Clarion & Franklin. Finally, on November 10, 1913 Miller decided to consolidate all three roads he controlled as the Lake Erie, Franklin and Clarion Railroad, with the lofty hopes of one day stretching northwestward to the lake via Franklin.

Unfortunately, this remained only a dream as the LEF&C never expanded beyond either of its original end points. The railroad, did, however radiate outward with small branches serving several coal mines the longest of which was the aforementioned Mill Creek line.

By the early 1920s the LEF&C had further "expanded" when it gained trackage rights over the New York Central to Franklin, primarily as a means of extending passenger service.

At the end of 1924 the NYC ended this practice, which returned to the short line to a 15-mile main line system. A year after losing its Franklin connection the LEF&C abandoned its Mill Creek branch. 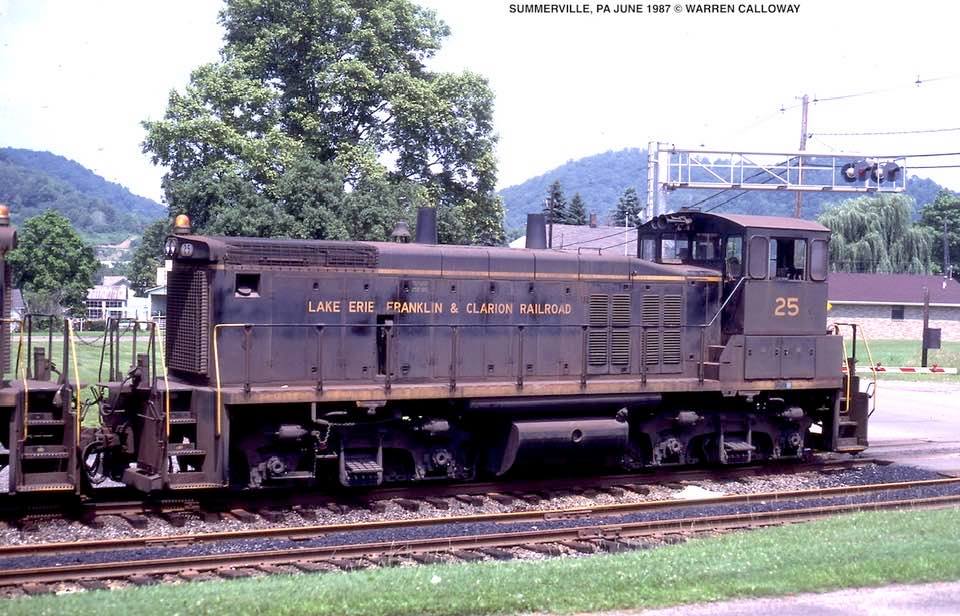 In 1942 the railroad canceled its passenger trains altogether after the PRR had stopped running them through the Summersville interchange since without any connecting trains available travelers no longer saw a need to use the LEF&C.

Over the following decades little changed on the railroad except in 1949 when it began replacing its 2-8-0 Consolidations with diesel locomotives, first purchasing an Alco RS1 in April of that year, #20. This was followed in 1950 and 1951 with two more, #21-22. 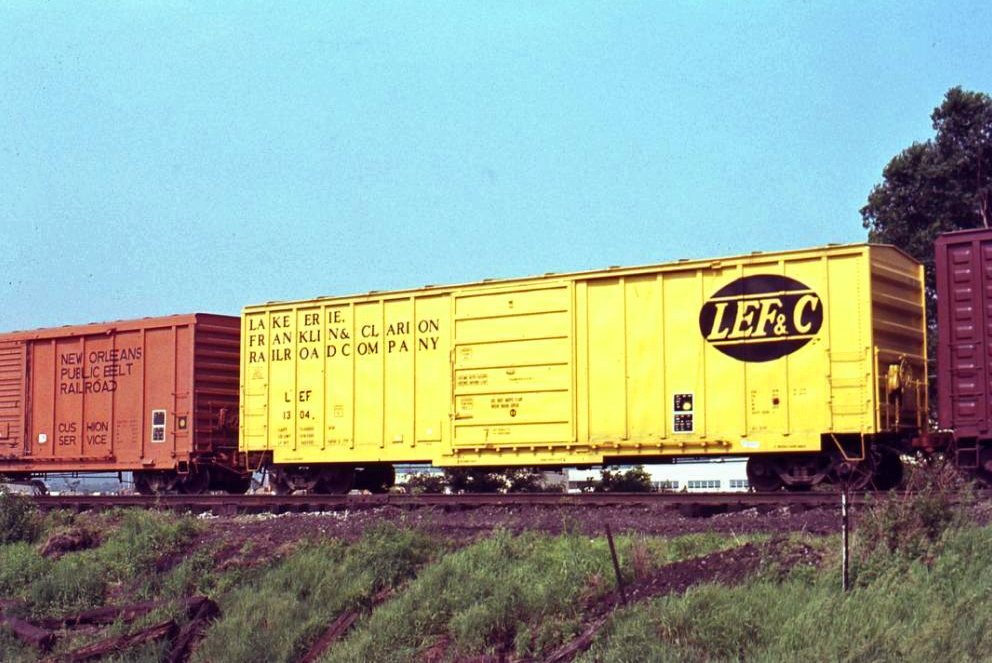 One of the Lake Erie, Franklin & Clarion's famous 50-foot boxcars in service during June of 1979.

Perhaps surprising given the Lake Erie, Franklin and Clarion Railroad's small size is that it remained a mostly profitable company from the 1920s onward except for the Great Depression years through 1935.

In its late era of operations its traffic consisted of brick, sand, glass, coal, and lumber. Additionally, it picked up new motive power in the 1970s which included two EMD SW1500s and later four, newer MP15DCs.

It was the loss of coal mines in the 1980s and early 1990s that severely hurt the railroad and finally forced it to shutdown.

The Interstate Commerce Commission granted the abandonment on September 17, 1992 and the railroad's final day of operations occurred on January 5, 1993.