Leland Stanford, is remembered as part of the "Big Four" in financing the construction of the Central Pacific Railroad, which included (along with himself) Collis Huntington, Charles Crocker, and Mark Hopkins.

In terms of building the railroad, it was Stanford who helped secure much of the land grants and funding through the state of California due to him holding the governorship at that time. While he had spent much of his early years studying and practicing law, much of his life after the California Gold Rush hit in 1849 was dedicated to operating business including railroads.

Today, Stanford is perhaps best known for holding the distinction of founding Stanford University, which was dedicated in the memory of his son. Stanford played such a large role in the entire endeavor that is unlikely the Central Pacific would have been completed otherwise.  Interestingly, his career pursuits did not immediately begin in the railroad industry.

Instead, after earning his law degree in 1845 he began practicing in Albany, New York with the law office of Wheaton, Doolittle & Hadley.  It was the Gold Rush which ultimately brought him to California in 1852.  However, he was interested in gold but the business. 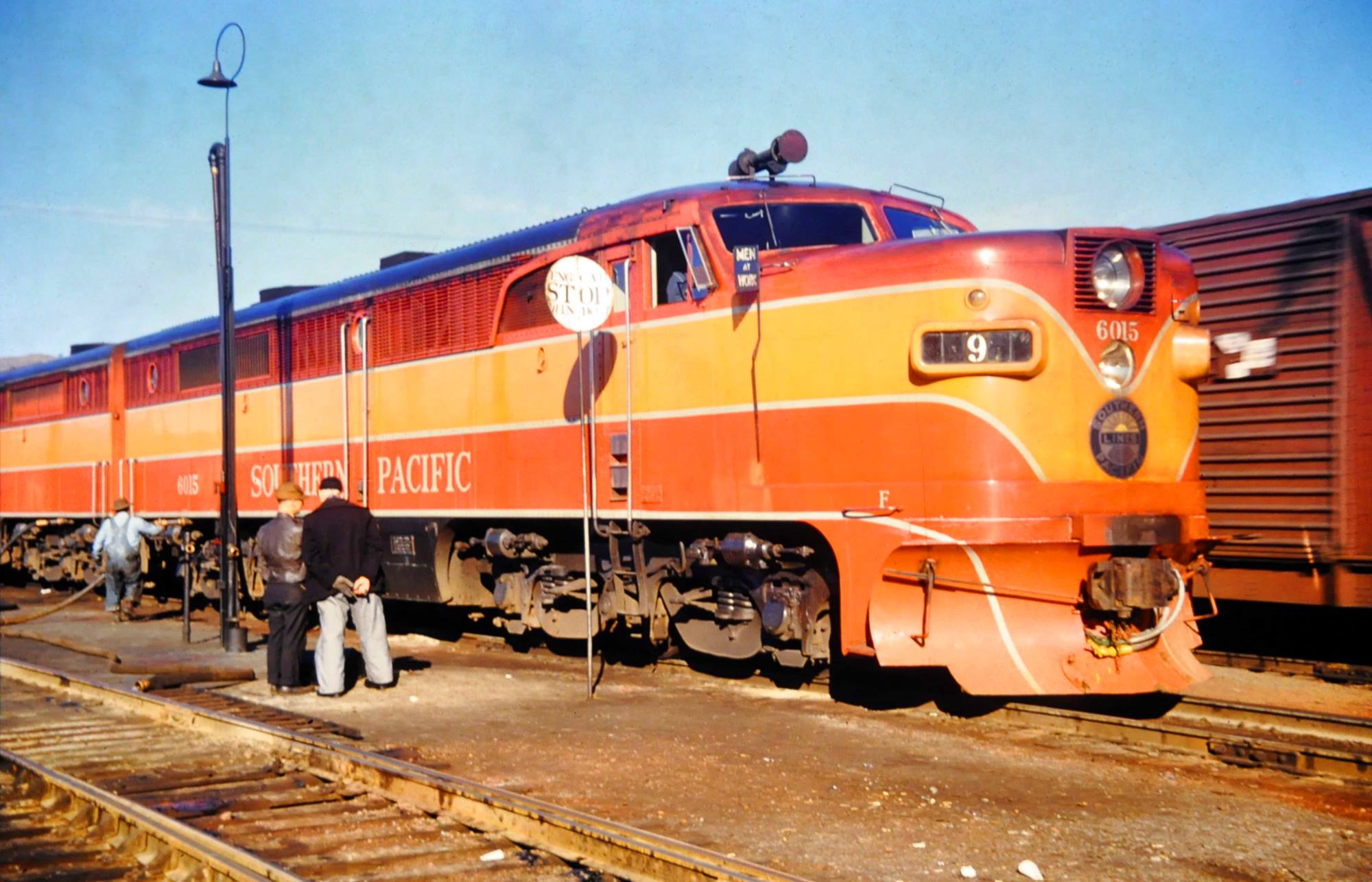 Southern Pacific PA #6015 is ahead of train #9, the southbound "Shasta Daylight" (San Francisco/Oakland - Portland), at Klamath Falls, Oregon in January of 1951.

Recognizing the great migration would offer bountiful business he opened successful mercantile establishments in Sacramento in 1856.  It was here that he met the three other men of the so-called "Big Four."

Stanford was born on March 9, 1824 near Albany, New York the son of a successful businessman. Due to the status and wealth of his family Stanford was able to attend school through his early 20s, lastly attending the Methodist Cazenovia Seminary before leaving the school in 1845 to begin a career in law.

By 1848 Stanford had a law license and two years later moved to Port Washington, Wisconsin to set up his practice.  Stanford only remained a lawyer for two years before he opted to head west to set up a business with his five brothers rather than rebuild his office which burned in a fire in March, 1852.

By July of that year he had arrive in San Francisco and in the fall he and his brothers were business owners in Cold Springs, east of Sacramento. Here Stanford became quite wealthy as their business thrived selling mining equipment and other supplies to miners. 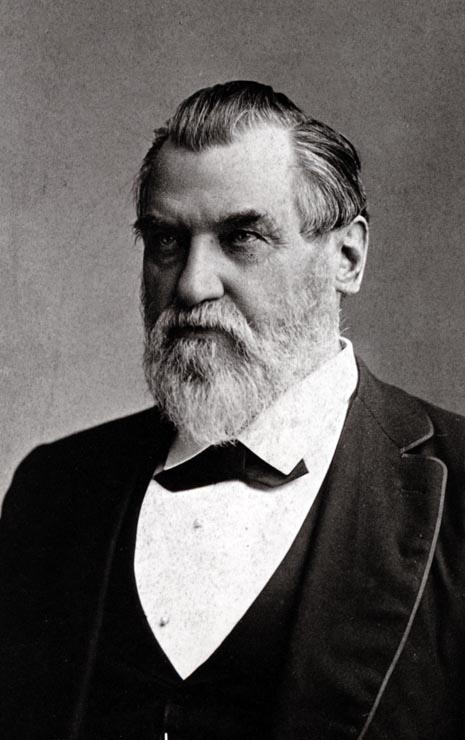 In the 1850s Stanford began to engage in politics, and is where he would eventually meet Huntington, Crocker, and Hopkins in 1856 (all of which were members of the Republican party).

Huntington, particularly, wished to see rails sprawling across California and helped establish the Central Pacific Railroad in 1861.  Even more, with Abraham Lincoln winning the presidential nomination in 1860 the new CP ratified the Pacific Railroad Act to help complete the Transcontinental Railroad.

The Union Pacific was created directly as a result of the act and together they worked to complete the new line.  For Leland Stanford's part, he was elected governor of California in 1861, which provided serious leverage for the CP to be financed and constructed across the state. 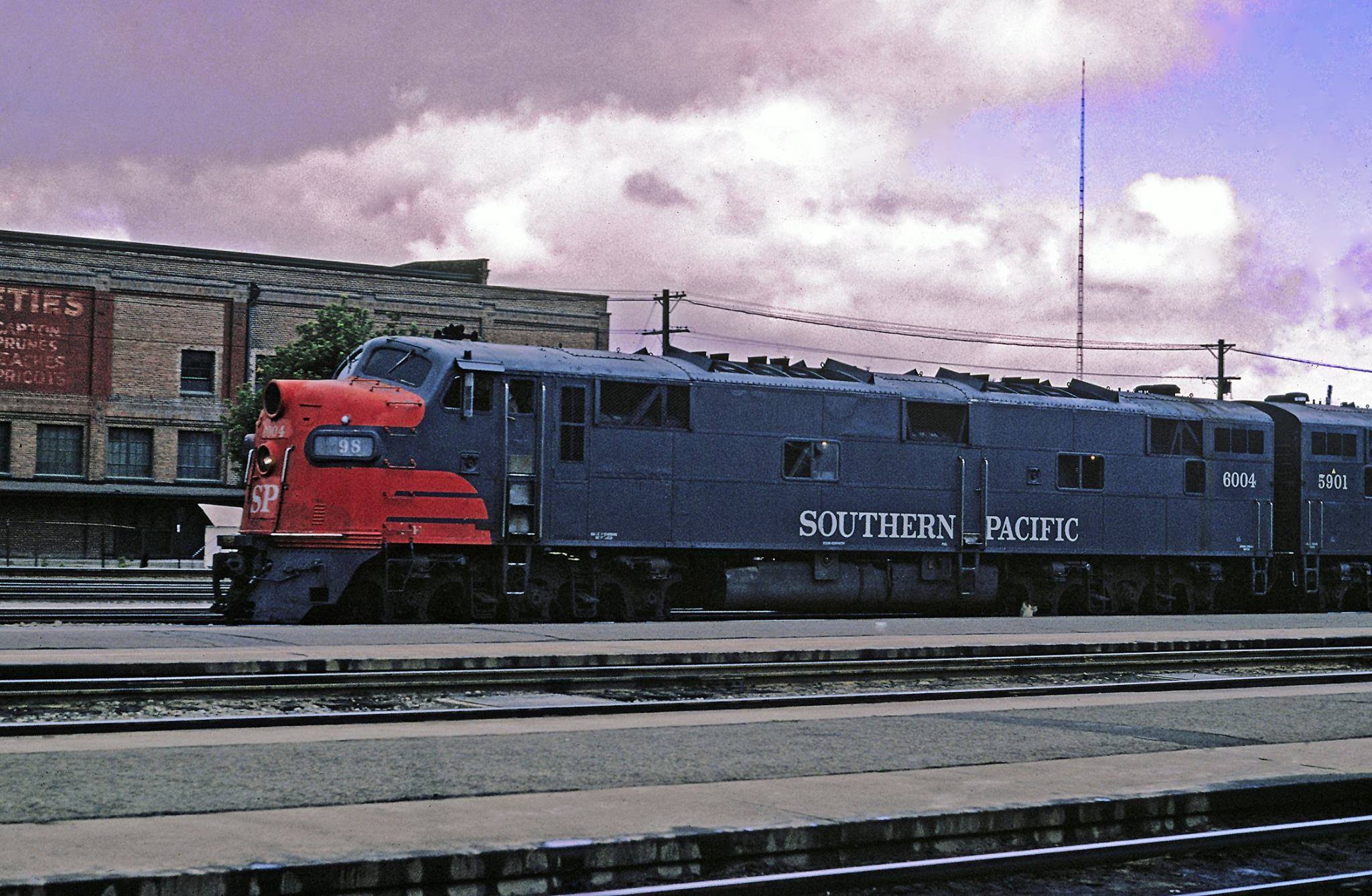 Southern Pacific E7A #6004 is ahead of train #98, the "Coast Daylight," at the Cahill Street Station in San Jose, California during June of 1964. Drew Jacksich photo.

Along with Stanford's efforts, the CP was also subsidized through the federal government (being given land grants as well as loans), mostly through Huntington's efforts who would become the principal leader of the group working with Congress to see that the railroad got whatever it needed.

While building the CP turned out to take much longer and cost much more than originally envisioned it was completed on May 10, 1869 at Promontory, Utah and linking with the Union Pacific system.  Four years prior to this milestone the Southern Pacific had been established to connect San Francisco and San Diego, California.

In September 1868, Stanford and the rest of the "Big Four" bought out the original founders of the SP and would combine the operations of the Central Pacific by 1870. Stanford became SP's president and remained so until 1890. 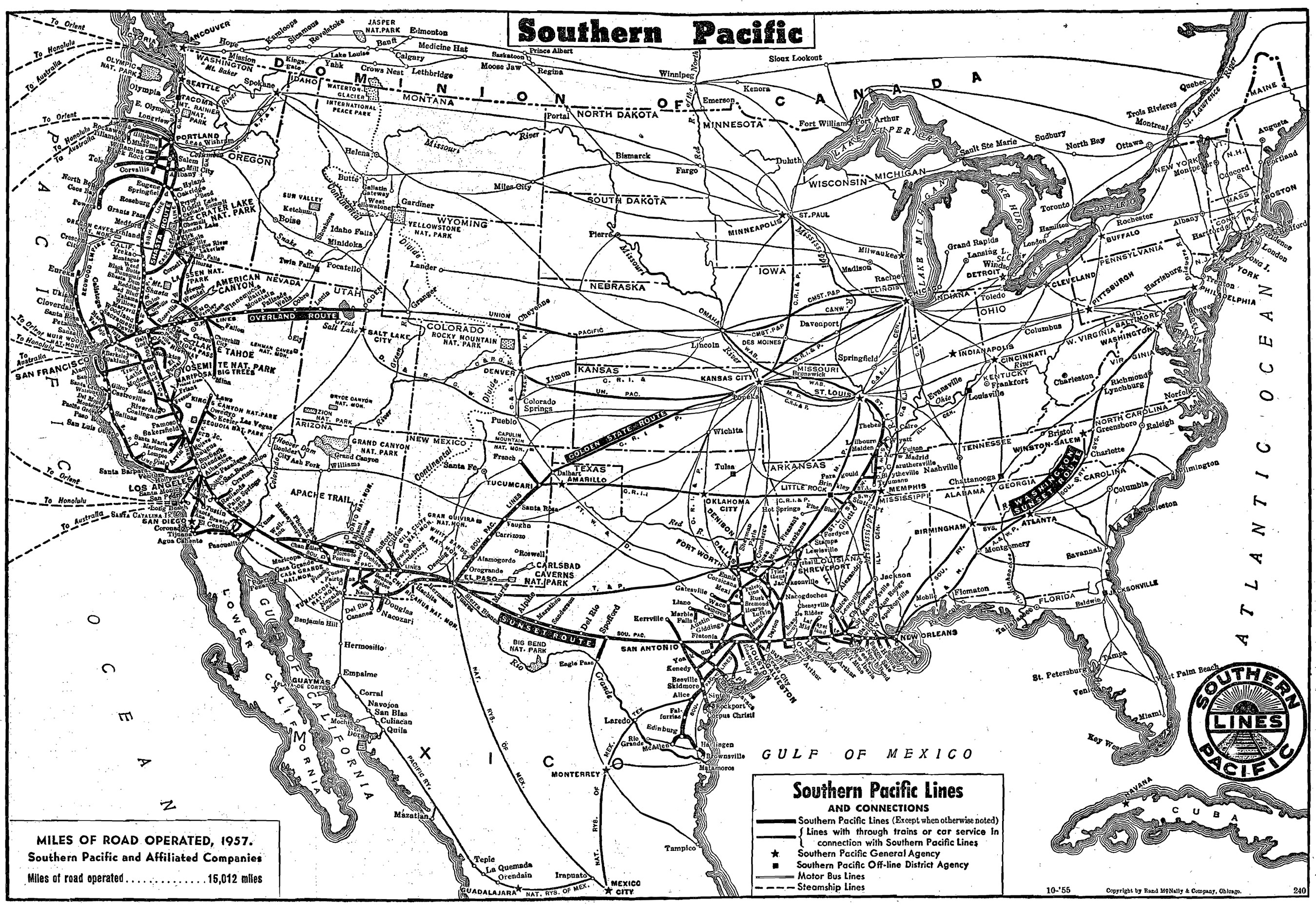 By the late 1870s the railroad was sprawling out across Southern California and served the state's largest markets including its line through the Southwest, which reached El Paso, Texas by the early 1880s.

Throughout the rest of the 19th century the Espee continued to spread throughout the West and Southwest, reaching northern Oregon and serving most of that state's largest cities by the late 1880s.  By the 20th century the railroad continued to expand and was by this time well entrenched into the Southeastern markets of New Orleans and the Gulf Coast.

Aside from Stanford's railroad interests, due to the incredible wealth he acquired over the years he also maintained other interests such as owning vineyards, helping to found what would become the Wells Fargo & Company, and even being elected to the U.S. Senate from California in 1885 (which resulted in a bitter dispute with C.P. Huntington).

However, outside of the railroad industry Stanford's most lasting legacy was the founding of Stanford University in March of 1885, named for his son Leland Stanford, Jr. who had died a year earlier.

In the end, Stanford would bequeath millions in setting up the university, which opened in 1891. in 1893, Stanford passed away at the age of 69 due to heart failure.  According to the book, "Civil War America: 1850 To 1875" by Richard F. Selcer, Stanford's net worth at that time was $30 million.