The Little Kanawha River Railroad (LKRR) is one of those many inconspicuous little short lines across the country.

It operates only a few short miles of railroad (less than three miles) and today serves a river-rail transload facility that is affiliated with its owner, Marietta Industrial Enterprises.

At one time the short stretch of trackage, now operated by the Little Kanawha River Railroad was in real danger of being abandoned by CSX Transportation in the late 1980s.

Luckily, it was saved by the Elliot family of Marietta, OH who stepped in and purchased the line, and continues to own it today.

This same family had previously had hopes of preserving rail service into nearby downtown Marietta, Ohio following Conrail's takeover of Penn Central on April 1, 1976.  The new carrier had no use for what was originally Pennsylvania Railroad's Marietta Branch.

Efforts to purchase the corridor, or at least the trackage serving downtown Marietta (which would have been reached via the B&O's old connection over the Muskingum River) failed when the family could not secure the necessary financial backing.

It was an unfortunate turn of events as the town still had 9 active rail shippers at the time.

An aerial view of the Little Kanawha River Railroad's primary terminal and customers in South Parkersburg.

Elliots’ Deal a Sweet One for Rail, Workers

A South Parkersburg rail line that was destined to be abandoned has been purchased from CSX Transportation by a Marietta family.

The Elliot family, which owns the Dock Side River Terminal, has purchased the 3.1 mile line that runs from the old American Viscose factory on Camden Avenue to the Ohio River Junction near the Juliana Street Bridge, where it interchanges with CSX’s main lines.

The line, which will be known as the Little Kanawha River Railroad, serves four customers: Ames Co., Badger Lumber, A.B. Chasce, and Dock Side.

It possesses a 1955 model 1,200 horsepower GM diesel locomotive, acquired from the Norfolk & Western Railway. The locomotive will be used to transport rail cars provided by CSX between the plants and the Ohio River Junction. 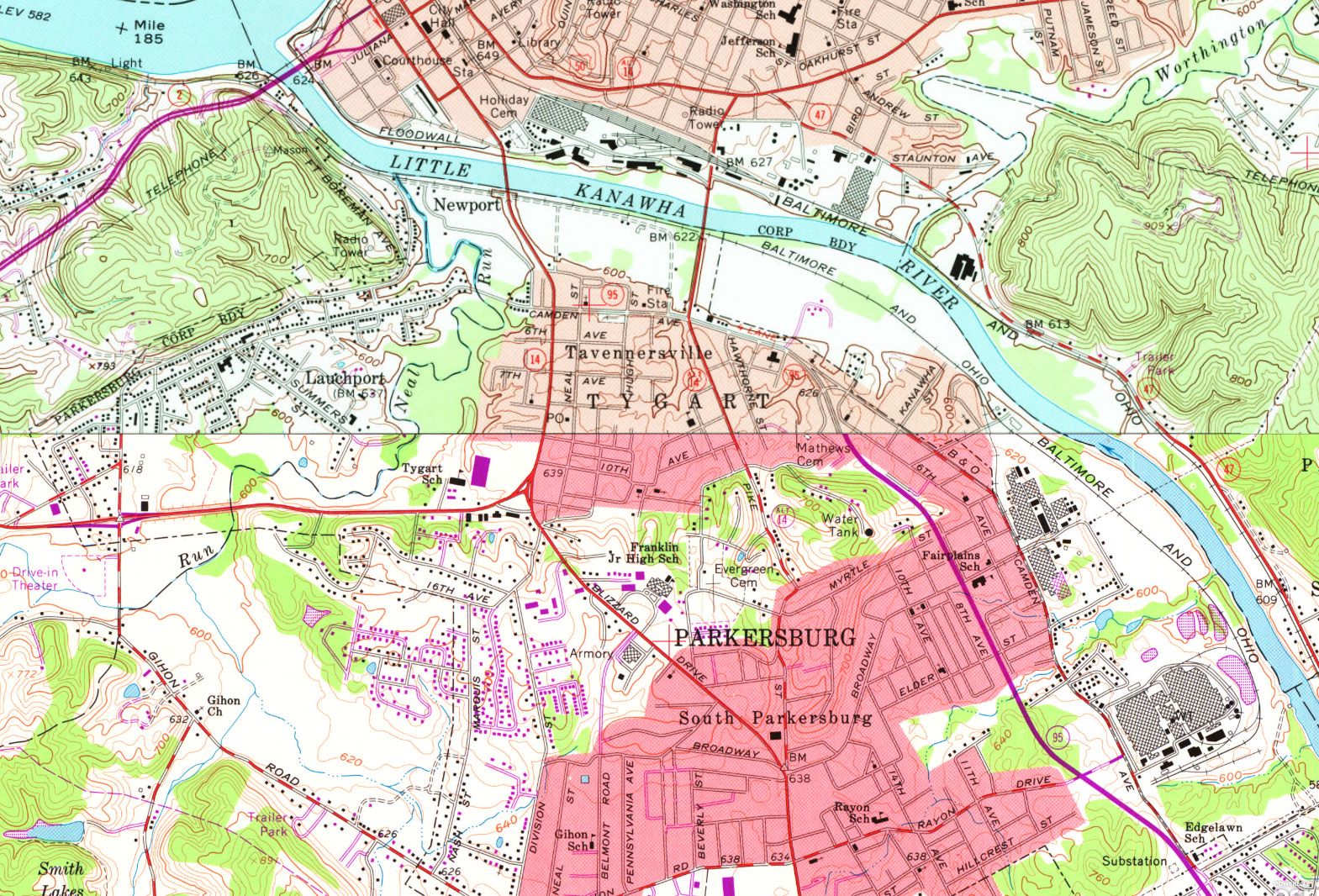 James L. Warsher, a consultant who helped the Elliots complete the purchase, says the deal marks the first time in 69 years the South Parkersburg line has been under local ownership.

“The original Little Kanawha River Railroad was incorporated in 1896 out of the Ann Street station,” Warsher explained. “When the B&O purchased the line in 1920, Wood County lost control of the rail line. Now, it has got it back.”

Warsher called the Elliots’ deal with CSX a win-win situation.

“CSX will enjoy the business from the line without having to provide it full service,” Warsher said. “The Elliots will be able to turn a profit by keeping the line’s existing customers. Where servicing four customers wouldn’t be profitable for CSX, it should be for a short line railroad.”

But the two railroad companies aren’t the only ones who win. The Little Kanawha River Railroad already has employed four former CSX workers who had been furloughed.

Plus there are the plants who depend on the railroad as their economic lifeline. Warsher said there will be a definite advantage to having the line under local ownership.

An advantage that could lead to further economic development along the line. “CSX doesn’t have a local person who can sit down and help you if you are interested in starting up the old Viscose plant,” Warsher said. “We would be more than happy to work with anyone interested in doing that.”

The rail line’s new owners also would be interested in discussing the possibility of establishing a local port authority.

That was a hot issue here two years ago, but seems to have died since then.  The Elliots have been working closely with the City of Parkersburg’s engineering office and the Mid-Ohio Valley Regional Council.

They have managed to acquire a Federal Railroad Administration grant that will allow work to be done at several south Parkersburg crossings. Plans call for the railroad crossings to be moved so that they cause less disruption to vehicular traffic. 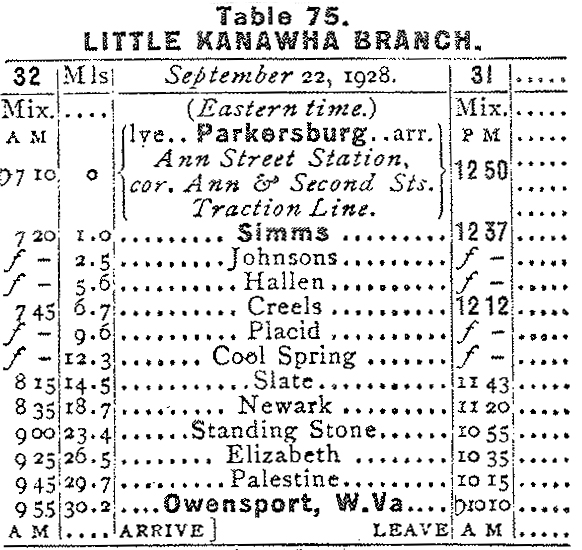 A timetable from the 1930 Official Guide showing the Baltimore & Ohio's "Little Kanawha Branch" at its longest length. Most of the line was abandoned shortly thereafter. Author's collection.

Wednesday’s announcement of the purchase culminated negotiations that began in May 1987. On two previous occasions, CSX had applied to the Interstate Commerce Commission for permission to abandon the line.

Although its efforts were rebuffed, CSX had been encouraged again to apply for abandonment. Indications were it would be granted the third time around.

The Elliot family business was started in the 1930s by William Elliot, who began a cement business and a towboat enterprise.

When he died about a dozen years ago, the firm was placed in the hands of his sons; Scott, Burt, and Grant. Grant will serve as president of the Little Kanawha River Railroad.

~ Many thanks to the late John G. King for much of the information provided on this page. 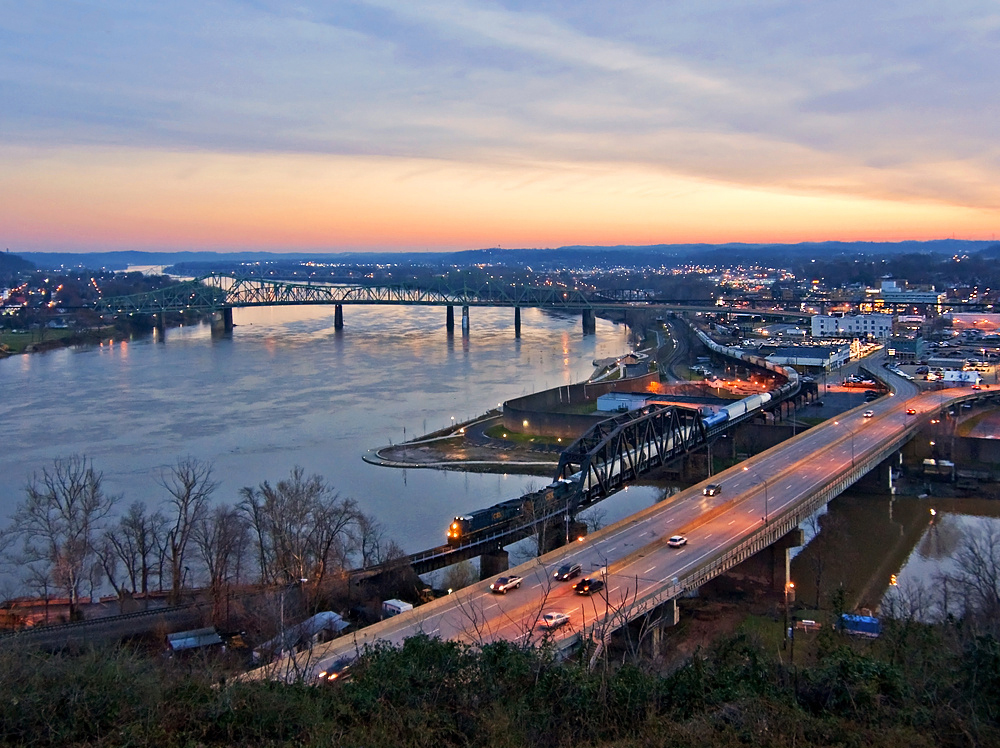 CSX Transportation manifest Q317 crosses the Little Kanawha River after departing Parkersburg's Low Yard on the morning of March 9, 2012. The LKRR connection is just out of view to the left. Loyd Lowry photo.

During the time the Baltimore & Ohio controlled the property originally known as the Little Kanawha River Railroad it referred to it as the "Little Kanawha Branch" which was part of the company's most larger Eastern Region of the Monongah Division.

This division encompassed many of its lines across northern West Virginia including its St. Louis main line that passed through Parkersburg.

The trackage included just 3.6 miles according to records and reconnected with the Ohio River Subdivision at a point known as "Ohio River Junction" just south of the Little Kanawha River.

With the loss of customers over the years the LKRR currently operates only about 1 mile or so of this remaining trackage.