The Louisiana & North West Railroad is a historic short line that has been serving its home state, as well as southern Arkansas since the early 1890s.

For many railfans, the L&NW is remembered for its fleet of Electro-Motive "covered wagons", which have long since disappeared from its roster.

The roller coaster history of the line is very fascinating. At one point it grew to more than 100 miles and then slowly abandoned sections of its system as traffic evaporated; the company has also kept itself afloat surviving on one form of traffic and then another.

It was conceived as a general common-carrier to operate a north-south route connecting most of Louisiana and Arkansas although the intended traffic never materialized.

For many years oil was its lucrative mainstay although today, the L&NW sustains itself on a variety of different freight and has the luxury of established interchanges with two Class I railroads (a rarity for many shortlines). 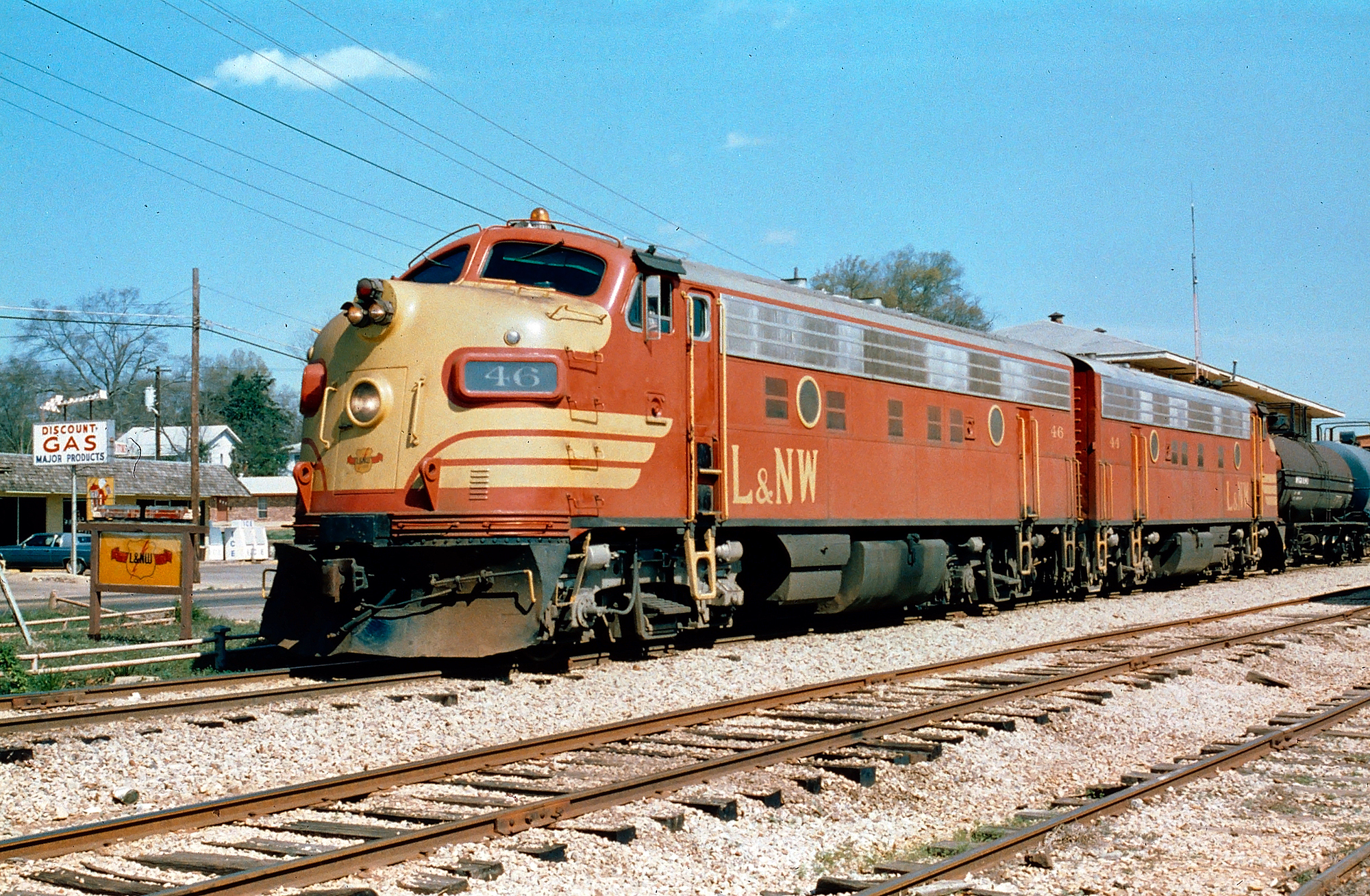 The LN&S had been formed by the town of Homer, in Claiborne Parish in hopes of seeing tracks connect it to the outside world and keep the community from being isolated (a real fear in those days when railroads were rapidly expanding and the hope for economic growth lay in steel rails reaching your town).

This system had reached its namesake cities in 1880 and would later become a part of the Illinois Central formally in 1946 (it had been leased to its subsidiary, the Yazoo & Mississippi Valley as early as 1923).

Actual construction of the LN&S began nearly two years after it was chartered when ground was broken on April 30, 1887 to build a 19-mile line from Homer, south to a location known as Gibsland along the VS&T.

Trains began running as early as January 1, 1888 along completed sections of the line but it was not fully operational until the summer of 1889.

While the specific purpose of the new company was to reach the VS&T the new railroad also had hopes of stretching much further south for the freight potential found in the cities of Natchitoches and Alexandria.

After the first section of this extension was opened on January 20, 1890 between Gibsland and Bienville (a distance of 17.33 miles) the L&NS was acquired a day later by the Louisiana and North West Railroad due to a loophole in the former's charter.

For now further ambitions to the south were put on hold while the L&NW looked northward to reach Magnolia, Arkansas which since 1881 had only been served by the St. Louis Southwestern Railway (Cotton Belt).

The railroad did have an incentive to do so as the right-of-way was already purchased by the city from the state.

The 35.7 miles from Homer to Magnolia were opened by October 4, 1898, which included the connection to the Cotton Belt's 6-mile branch, purchased by the L&NW a few months earlier on August 1.

After 1900 the railroad continued southward again, reaching Natchitoches in March of 1905.

At this point its length peaked at 124 miles and it never reached its ultimate goals; continuing on to Ashland and New Orleans along with a northward extension to Fort Smith for a total system that would have spanned nearly 600 miles.

The L&NW struggled after opening its route to Natchitoches as freight never materialized and the debt of building the line forced it into bankruptcy in August, 1913.

Thanks to the discovery of oil around Homer in January, 1919 the company was able to come out of receivership just a few years later on May 21, 1922. 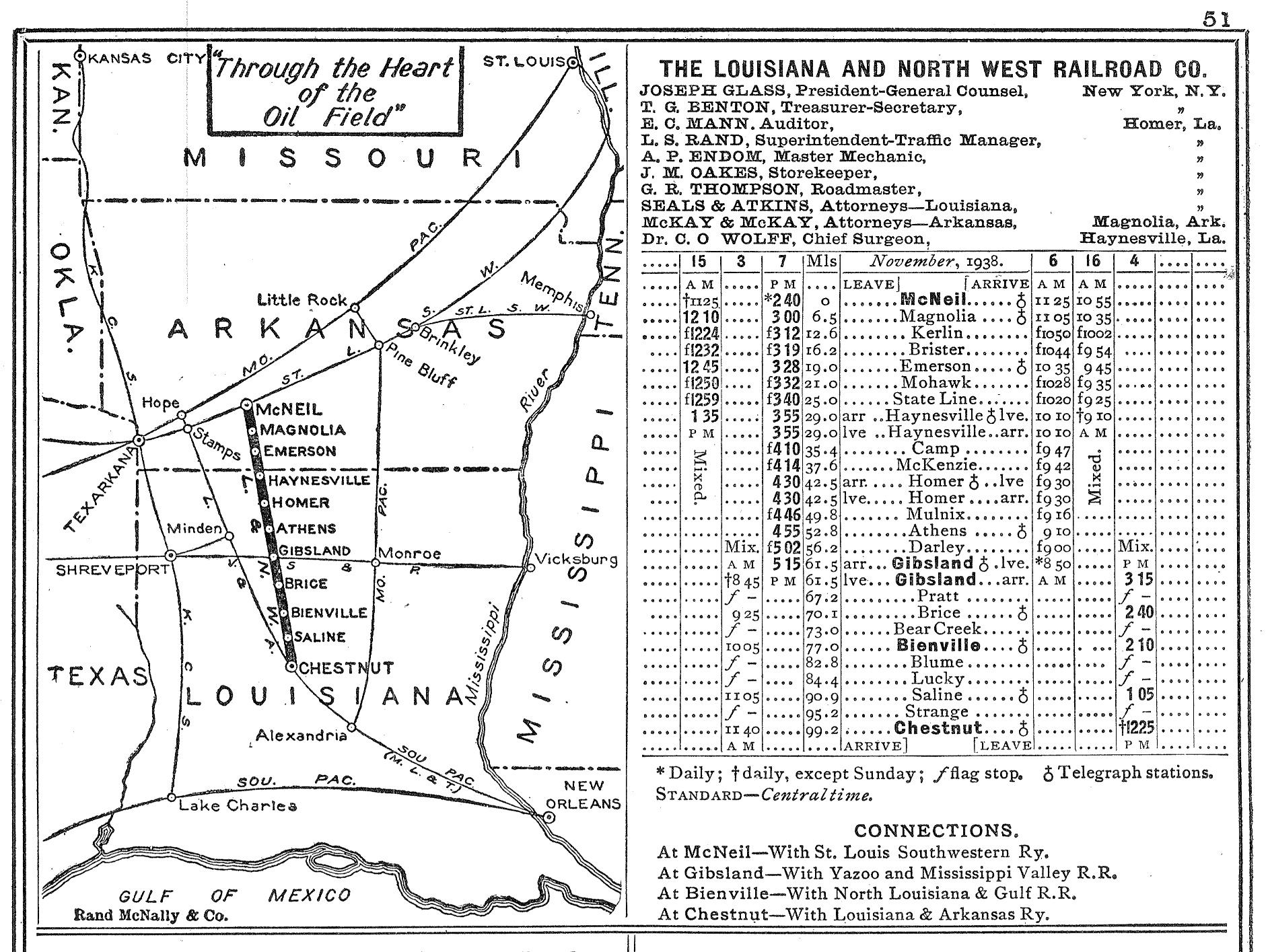 A year earlier the L&NW also began to cutback its extension south of Gibsland, abandoning the line between Natchitoches and Chestnut, 22 miles in all.

The rest of the line was pulled up 20 years later in 1949 between Gibsland and Chestnut (except for the 15 miles between Bienville and Gibsland, purchased by the North Louisiana & Gulf) leaving the Louisiana and North West Railroad with a 61.5-mile system it still operates today.

During World War II the system was not able to cash in on the explosion of traffic growth experienced by the industry as a whole since it did not serve any munitions plants or related companies that served the war effort.

However, this changed a few decades later with the start of the Vietnam War in the mid-1960s. It moved munitions in conjunction with the IC via the Gibsland interchange from the Louisiana Army Munition plant at Doyline.

This time period also signaled three other notable events for the railroad:

The red-colored chemical is highly corrosive but is very useful as a fire retardant among other things.

The discovery of bromine in southern Arkansas, which just so happened to be home to one of the largest concentrations anywhere on the planet, could not have come at a better time with the traffic from Vietnam conflict winding down.

Today, it still makes up part of the L&NW's traffic base.  Under Salzberg ownership the railroad gained a new, standard look sporting a common livery of red and yellow.

However, unlike its cousin, the WAG, the L&NW sustained its profitability through the years. Since 2008 the property has been a division of Patriot Rail, a short line conglomerate

The arrival of the F7s (and an FP7) also drew the interest of railfans as the locomotives were still in regular use well through the 1980s. Today, the covered wagons have long since disappeared, replaced by various first and second-generation EMD Geeps.

The railroad's traffic base has also changed. While bromine is still an important source of traffic it no longer moves petroleum products with other freight including, wood products (lumber and plywood), steel, and plastics. 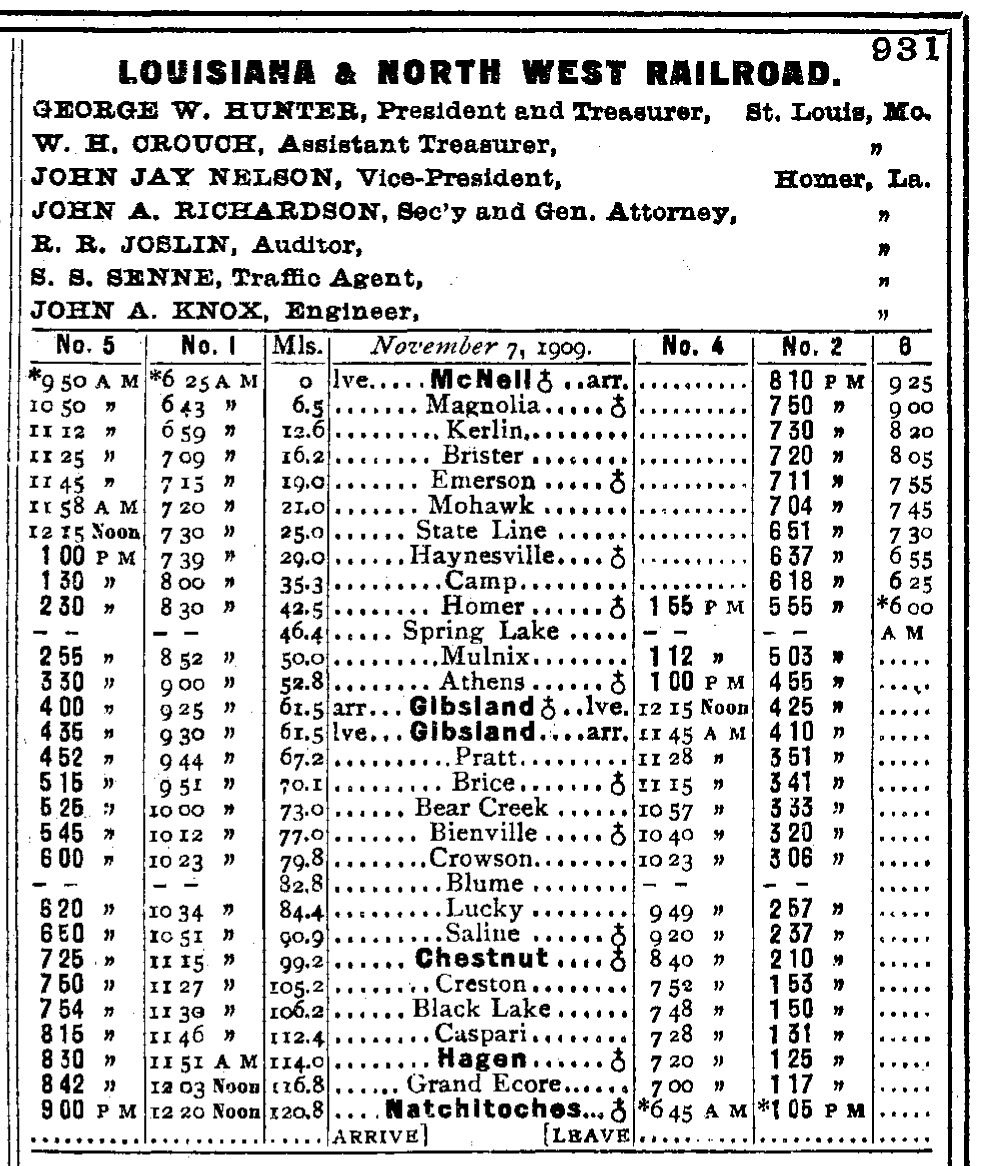 It should be noted that for many years the L&NW offered regular passenger service, through the late 1940s in fact, which is a quite long for a railroad of its size.

The latter was acquired on August 8, 1944 from the Chicago & Eastern Illinois, which had received it new May, 1937 and named the Mount Vernon.

It was built with a shovel-nosed, streamlined design that sported a eye-catching livery although was pulled from service in 1948 due to its unreliability. The retirement of #400 that year ended all passenger services.

Thanks to Alton B. Lanier's "567B's in the Bromine Belt" from the May, 1985 issue of Trains magazine as a primary reference for this article.

Over the years, the Louisiana and North West Railroad owned a wide variety of steam and diesel locomotives, both purchased new as well as secondhand. Its largest steamer was a 2-8-2 Mikado and most such locomotives were Baldwin products.

However, during the diesel era it owned only two Baldwins, a pair of VO-1000 switchers. Aside from these its diesels have exclusively been EMD products from GP7s and GP9s to GP35s and GP40s.

The future of the L&NW looks to be very good with a profitable mixed traffic base and connections to Union Pacific at McNeil and Kansas City Southern at Gibsland (which purchased the old IC route).