The Clinchfield Loops were an engineering marvel of their day, a series of twisting and turning horseshoe curves located south of Spruce Pine, North Carolina in the state's western Smoky Mountains which kept the grades of the Carolina, Clinchfield & Ohio Railway (better known as the Clinchfield) to a reasonable stature of under 2%.

The completion of the CC&O marked decades of attempts in building a railroad from the Kentucky to South Carolina.  The loops, and the railroad in general, were incredibly expensive to build featuring literally miles of tunnels and bridges.

However, the right-of-way was so well laid out and constructed that it turned the Clinchfield into a very profitable coal-hauling road in the years to follow.  During a two-year period, from 2015-2017, the loops and the former CC&O main line was closed as a through corridor.

As a result, several were closed and CSX's traffic patterns changed.  This brought new life to the Clinchfield.  Trains returned only a month after Harrison came on board and the Loops now act as a relief valve for other parts of the CSX network. 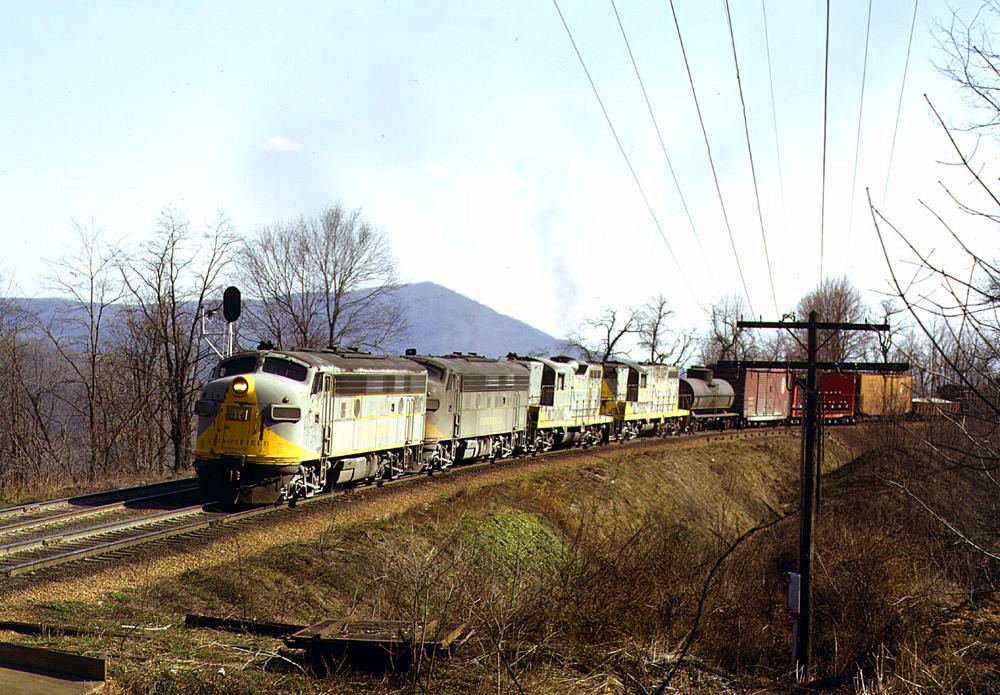 A pair of Clinchfield F7A's, led by #814, along with a pair of Geeps are about to lead their mixed freight into Ridge Tunnel along the Loops, deep within Western North Carolina's Appalachian region, during November of 1971. Warren Calloway photo.

To understand how the Loops were constructed one needs to look at the history of the Carolina, Clinchfield & Ohio Railway.  When it was finally completed, the CC&O was one of the last major mountain railroads opened in the United States.

However, proposals for this corridor dated as far back as the industry's earliest days, during the 1830s, to have rails connecting the Ohio Valley at Cincinnati with Charleston, South Carolina.

The first company with serious intentions of making this route happen was chartered in 1886; the Charleston, Cincinnati & Chicago Railroad otherwise known as the "Three Cs."  Thanks to an initial strong financial backing the CC&C was able to quickly build more than 150 miles of railroad connecting Marion, North Carolina to Camden, South Carolina by 1889. 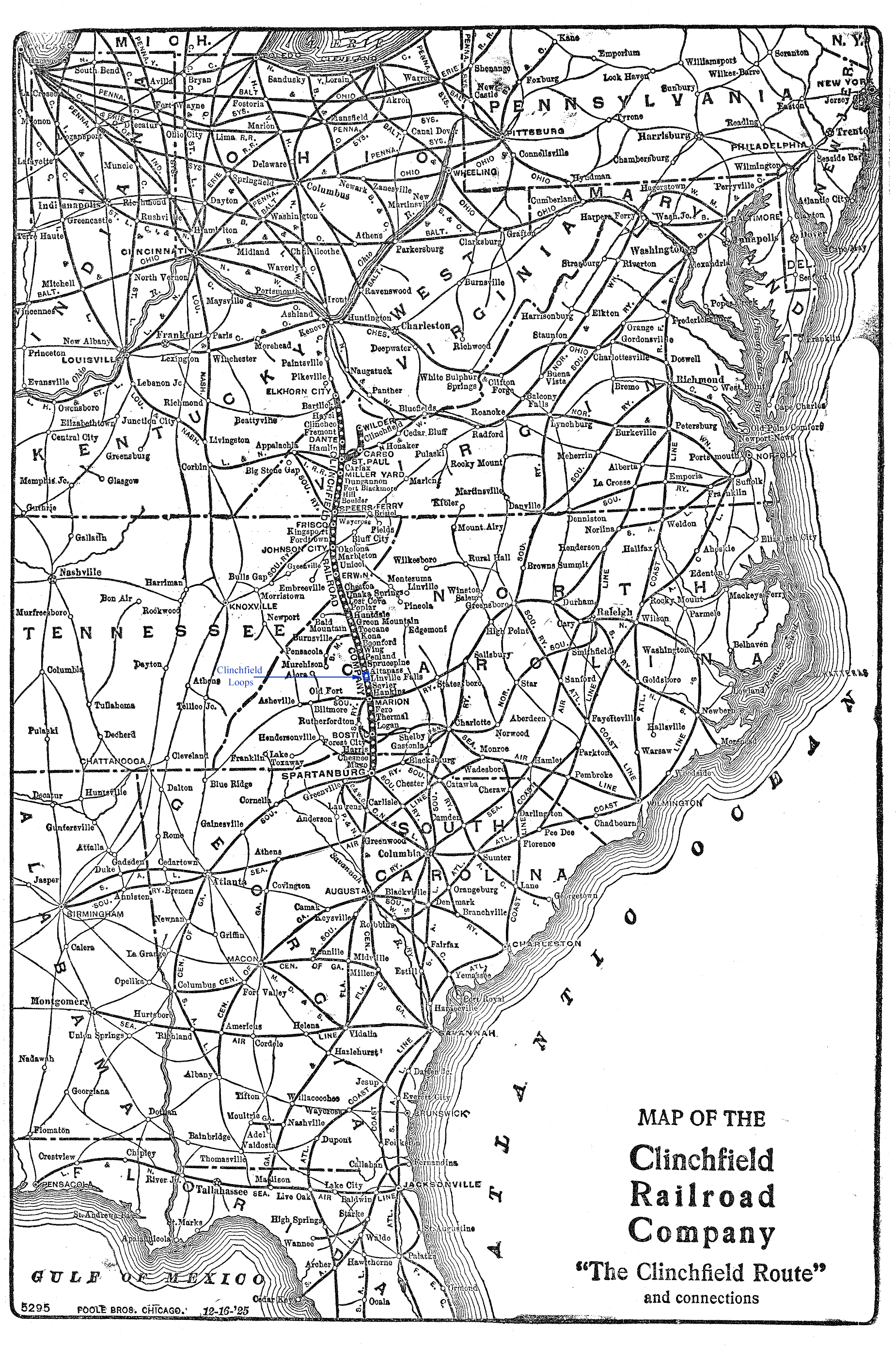 The road was working on its northern extension into Kentucky during 1890 when a major bank financing the project failed and forced the line into bankruptcy.  The project died at this point as the property was cut up and sold in 1898 among the Southern Railway and Chesapeake & Ohio.

Four years later the project again came back to life when George Carter formed the South & Western Railroad in 1902.  Under his leadership, and an ability to secure financial backing for the project, the present-day Clinchfield main line was completed.

By 1904 Carter had opened a 62.8-mile line between Johnson City, Tennessee and Spruce Pine, North Carolina.  The most difficult issue in building any further north was simply in battling for the right-of-way with the C&O through the Big Sandy River valley in Kentucky known as the "Battle Of The Breaks." 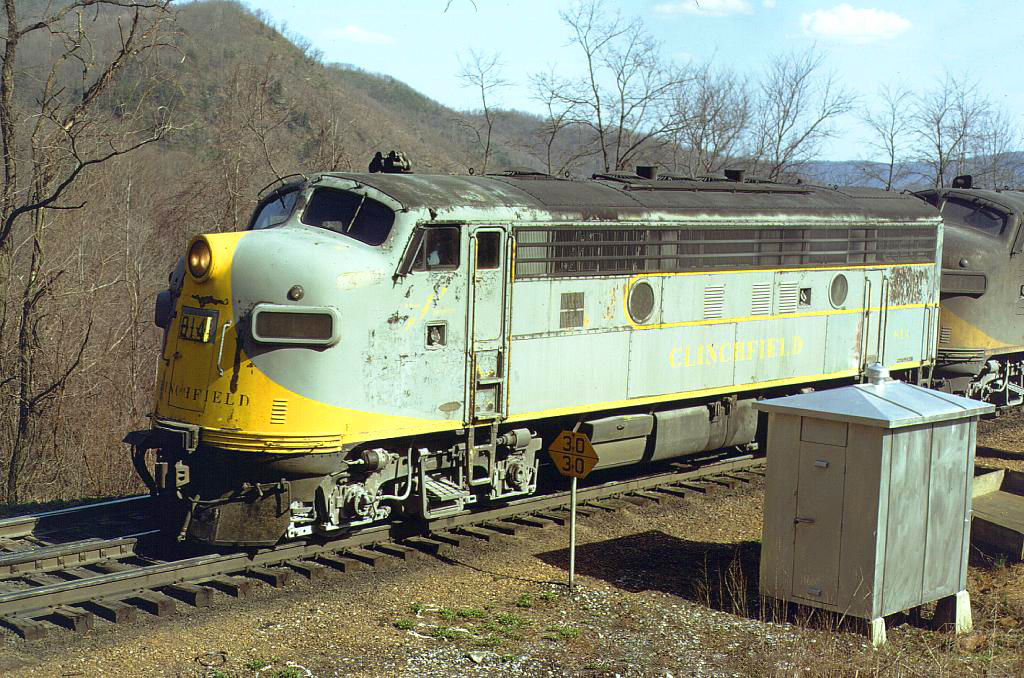 Clinchfield F7A #814 is ahead of a long manifest freight at appropriately-named Ridge, North Carolina on November 2, 1971. Warren Calloway photo.

Carter would eventually win this fight in the courts and later established an interchange with the C&O at what became the Clinchfield's northern terminus in Elkhorn City.  By 1908 the S&W had built 35.8 miles of new railroad to Marion, North Carolina giving it a main line of 98.2 miles.

It was this section of the route in which the famed Clinchfield Loops are located.   Carter believed that the railroad should be constructed to a very high standard, which was especially difficult considering it would be built through the southern Appalachians.

Throughout construction steel was used in erecting bridges, not wood (unless it was a temporary structure), tunnels featured dimensions of 18-feet across and 24-high (much larger than standard designs called for), and the road's chief engineers wanted the line set to a maximum grade of just 1.2% when the standard mountain grades of the era were commonly set to 2%.

Even more fascinating is the fact that to keep grades at 1.2%, the loops feature 29 railroad miles when in fact they only travel an actual 12 miles from north to south. As the book, A History of Railroading in Western North Carolina by Cary Poole points out, during one stretch of the line between milepost 208 to Wasburn Tunnel a train must negotiate 16.5 miles of railroad while if one could walk this in a straight line it would only be 1.9 miles.

The below information is gleaned from Trains Magazine's article, "Men Against Mountains" by Ron Flanary, featured in the October, 2001 issue.  The tunnels are listed from north to south.  Note that these are only the tunnels on the Clinchfield Loops and does not represent all tunnels across the Clinchfield system!

After the line was completed to Marion the company was renamed as the Carolina, Clinchfield & Ohio although another seven years of construction were required before the railroad was opened officially by George Carter himself during a golden spike ceremony on February 9, 1915 between Elkhorn City and Spartanburg, South Carolina.

The CC&O's entire main line stretched just 276.9 miles but it was built to such high standards that it was an industrial marvel.  Coal became the staple of the road, a commodity it could move in significant numbers thanks to the forward thinking of its designers.

Eventually, the Clinchfield was acquired by the L&N and then passed into the Family Lines system, merged into the Seaboard System, and disappeared into CSX Transportation during the 1980s.  Under CSX the route remained an important corridor until the fall of 2015.

That October, as a result of more than $1 billion in coal tonnage declines since 2012 the railroad mothballed the line between Elkhorn City, Kentucky and Spartanburg, South Carolina.   Interesting, this move proved short-lived.  Under the new direction of then-CEO and President E. Hunter Harrison, CSX re-opened the old Clinchfield as a through route.

It was part of his patented "Precision Schedule Railroading" concept.  Test trains began on April 8, 2017 and traffic picked up significantly in the fall of that year.  Part of Harrison's plan called for fewer hump yards which shifted traffic patterns on CSX.  As a result, the Clinchfield is now used a type of relief valve corridor, thus reducing pressure over other areas of the network.