The Mainstreeter is sometimes forgotten as one of the Pacific Northwest's important transcontinental streamliners: the Northern Pacific simply did not offer that many transcontinental services and the train was not launched until the 1950's.

Despite the Mainstreeter's lack of publicity it proved a very important run for the railroad. While the North Coast Limited always made headlines its second-tier sibling worked quietly earning the NP steady profits through the movement of mail and seasonal vacationers to the popular Yellowstone National Park.

In addition, the Mainstreeter was an all-stops service, meaning it paid a visit to every notable station along Northern Pacific's transcontinental corridor.

The train operated for nearly 20 years, surviving through the Burlington Northern era.  It was finally discontinued with the start of Amtrak on May 1, 1971. 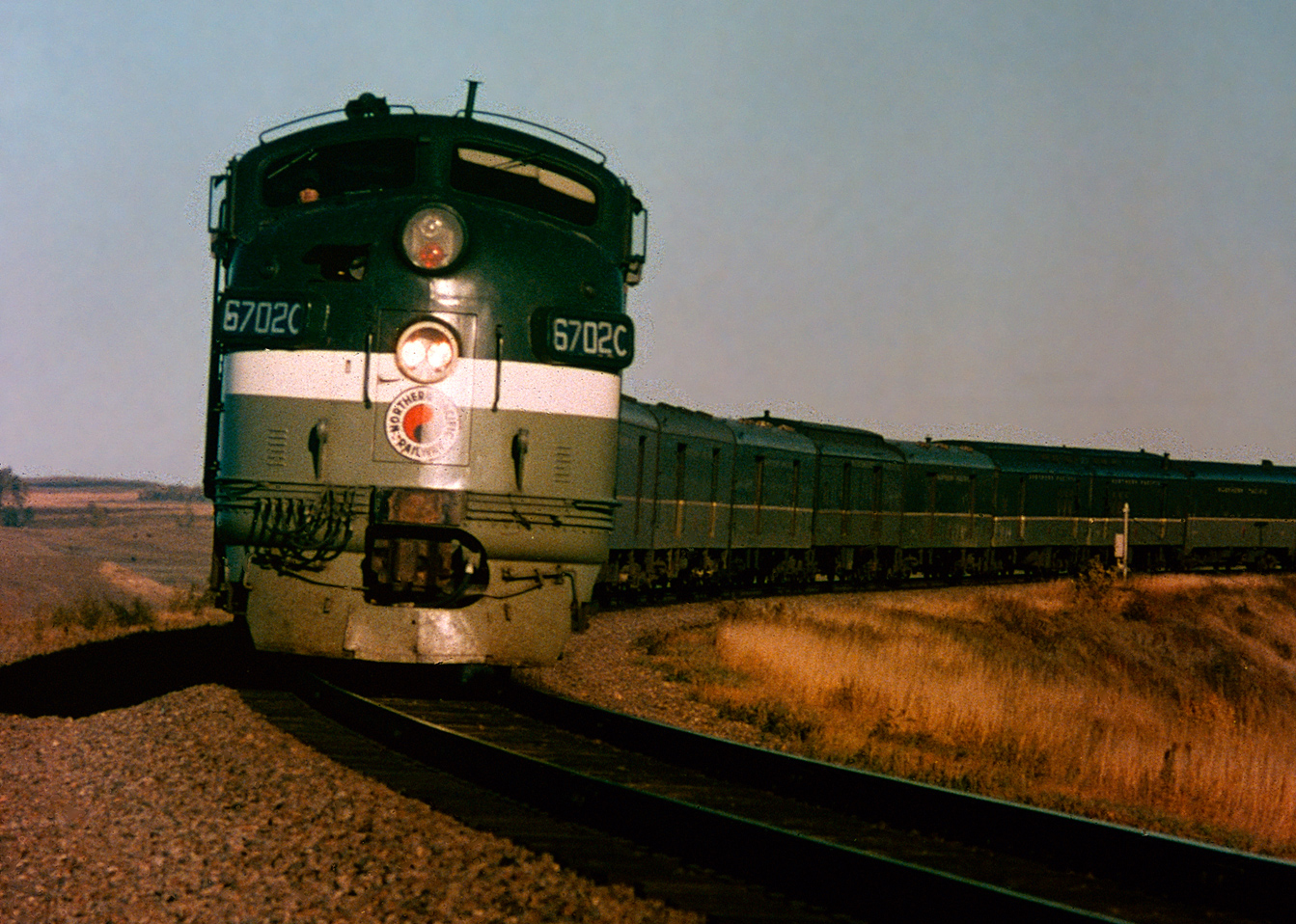 Before the Northern Pacific launched the Mainstreeter there was another train serving its territory, known as the Alaskan. This run had a history that closely paralleled the NP's crack North Coast Limited, which was launched in late April of 1900.

As a secondary consist the Alaskan's primary responsibility was to provide local and intermediate service between Chicago and Seattle whereas the flagship was a fast express, limited stop train.

Reaching the two cities required help from allying roads; the Burlington between Minneapolis and Chicago as well as the Seattle, Portland & Spokane for the connecting section to Portland (via Spokane).

For a half-century little changed with either train except improved transit times, faster and more powerful steam locomotives, and all-steel heavyweight cars.

However, all of this changed with the streamliner age that dawned in 1934 when the Union Pacific and Burlington both successfully demonstrated the effectiveness of the gleaming, colorful, and fast trains. 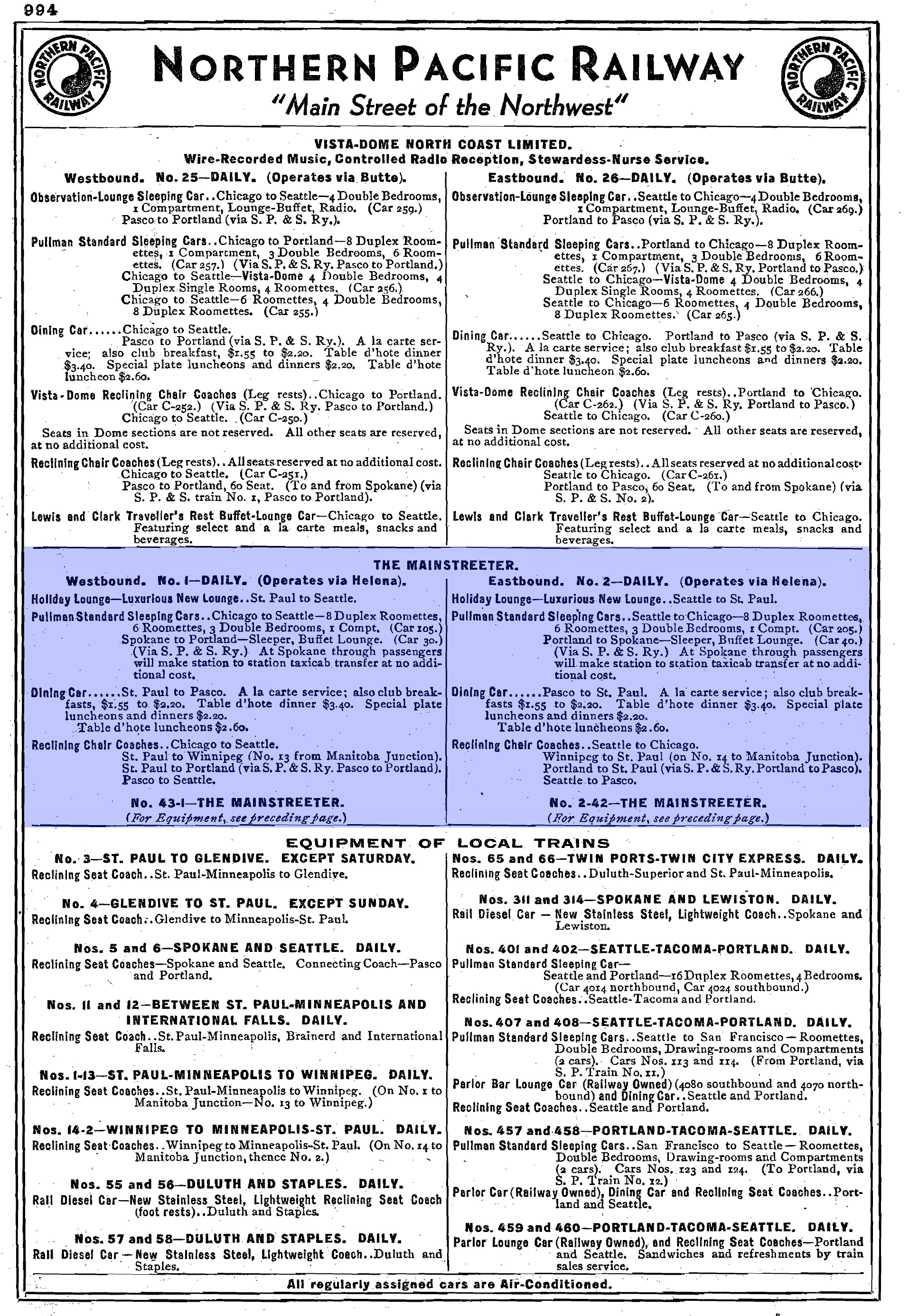 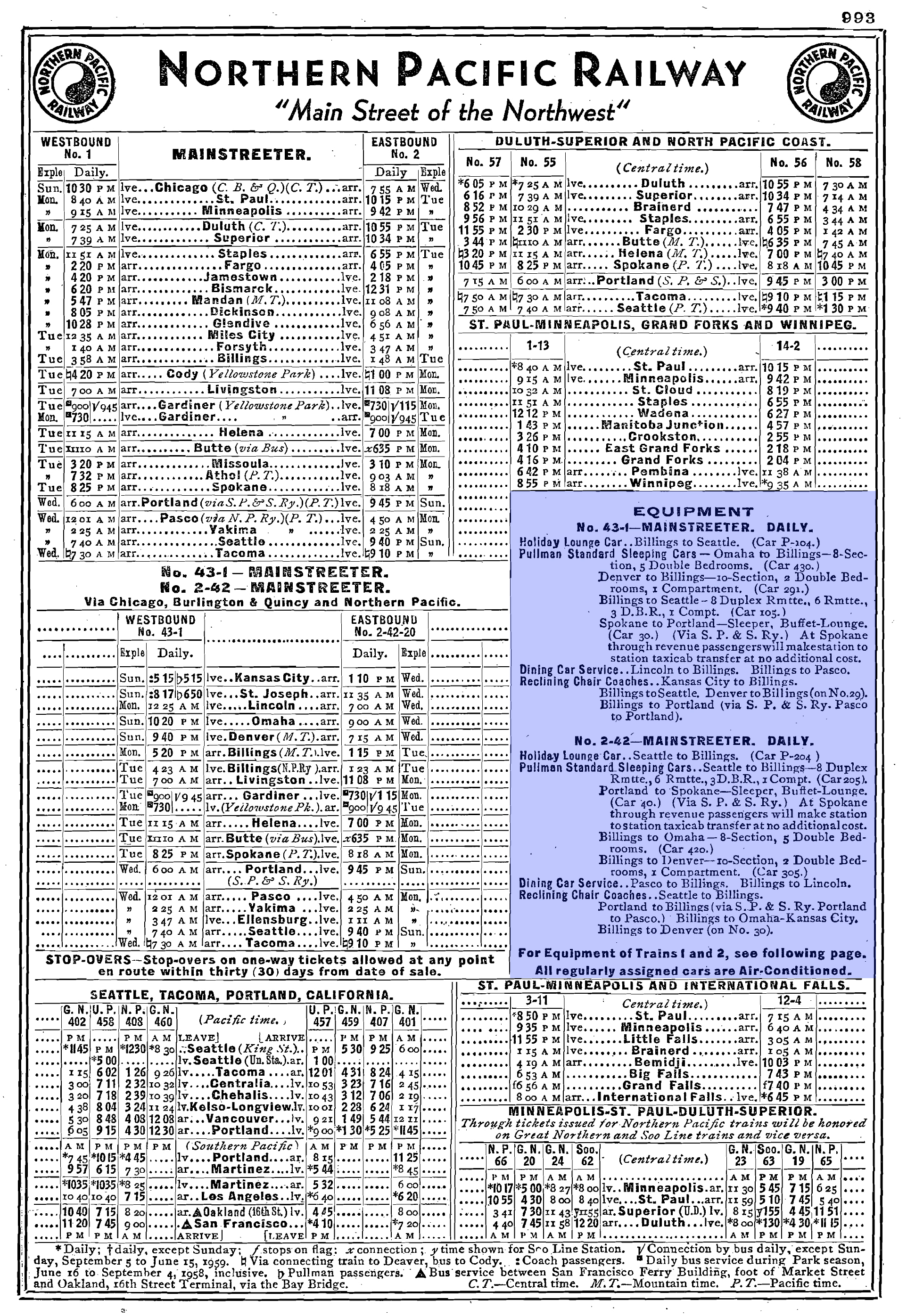 In 1946 the North Coast Limited was entirely reequipped with new, lightweight equipment from Pullman-Standard, which had been ordered two years earlier in 1944. The train was bedecked in a stunning two-tone green livery with white trim.

Despite the NCL's new look it still did not offer comparable running times with either the Great Northern's Empire Builder or the Milwaukee Road's Olympian Hiawatha.

This changed in November of 1952 when the Northern Pacific cut the NCL's schedule to just over 37 hours but doing so reduced many stops along the way.

To  continue providing local service the NP inaugurated the Mainstreeter, named after the railroad's slogan as "Main Street of the Northwest." Using a mix of rebuilt heavyweight cars and newer lightweight equipment the train ran a schedule nearly 10 hours longer than its big sister (46.5 hours).

Despite the fact that the train  ran a slow schedule, even in comparison to the GN's Western Star (the secondary run to the Builder), and was only semi-streamlined it was nevertheless adorned in NP's classic two-tone green passenger scheme as well.

The Mainstreeter's consist comprised  a wide range of equipment depending on needs and demand. However, typically, one could find its makeup including a half-dozen heavyweight baggage cars (especially in the later years), a standard Railway Post Office (RPO), a handful of reclining seat coaches, one sleeper, and a diner (between St. Paul and Pasco, Washington). 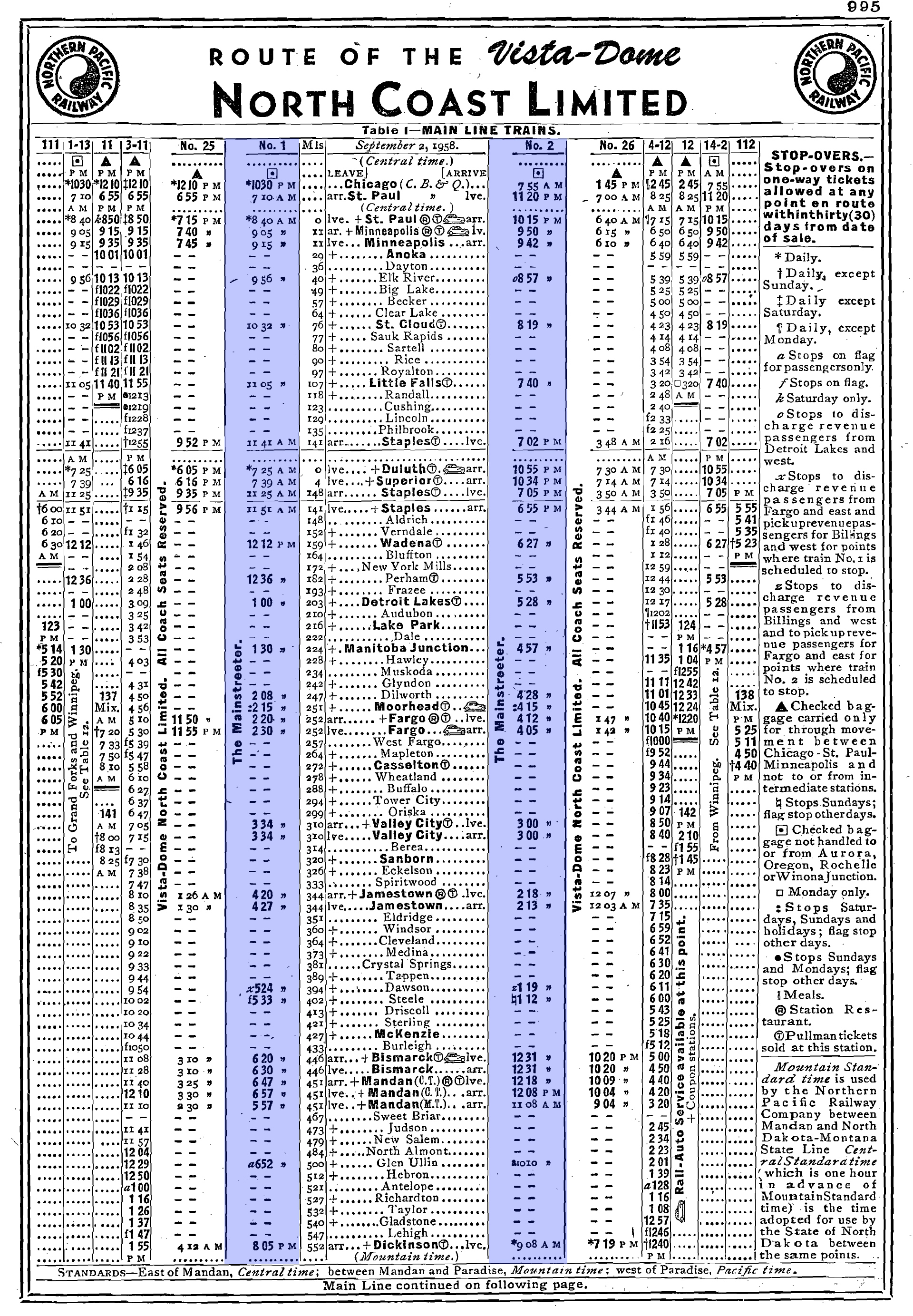 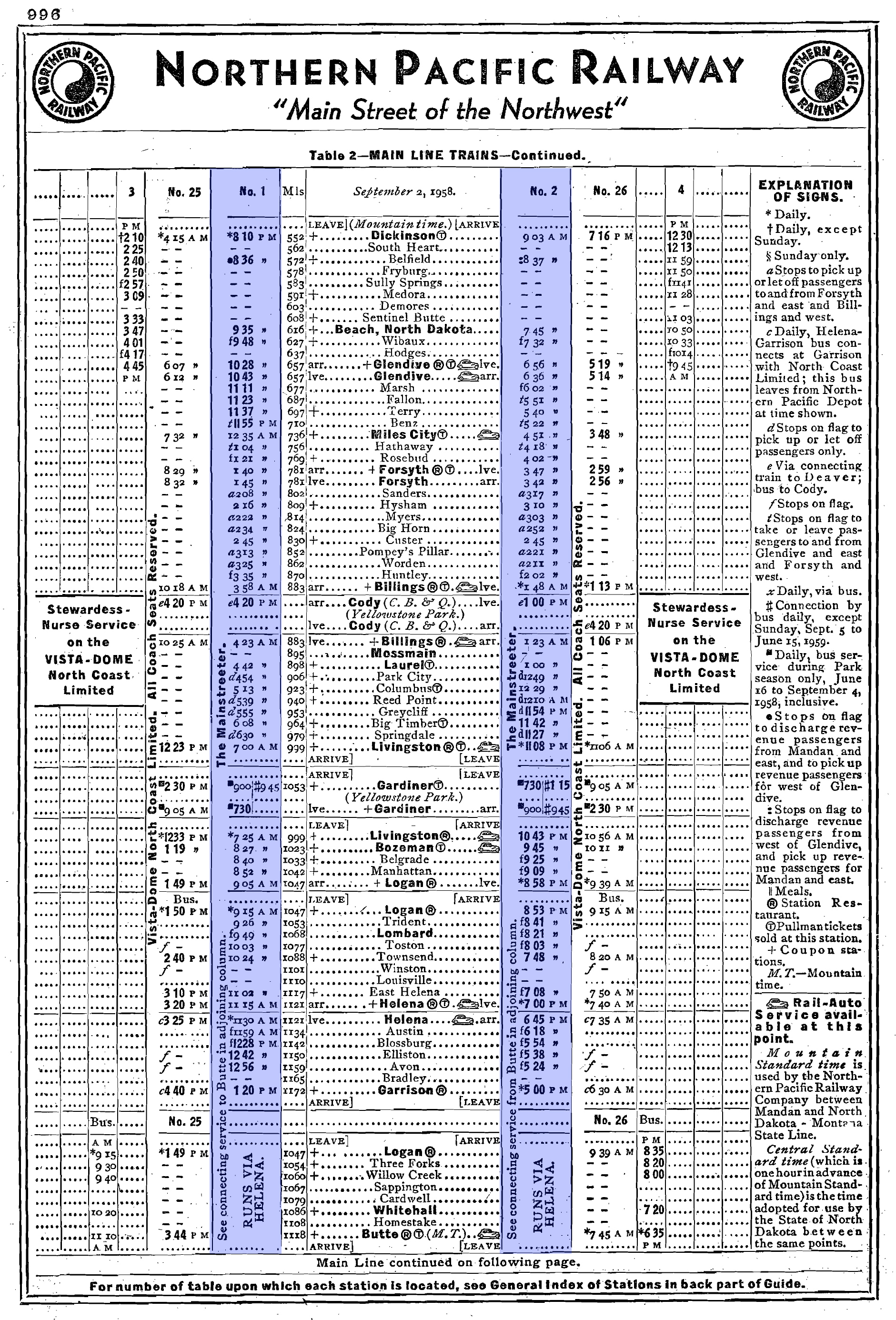 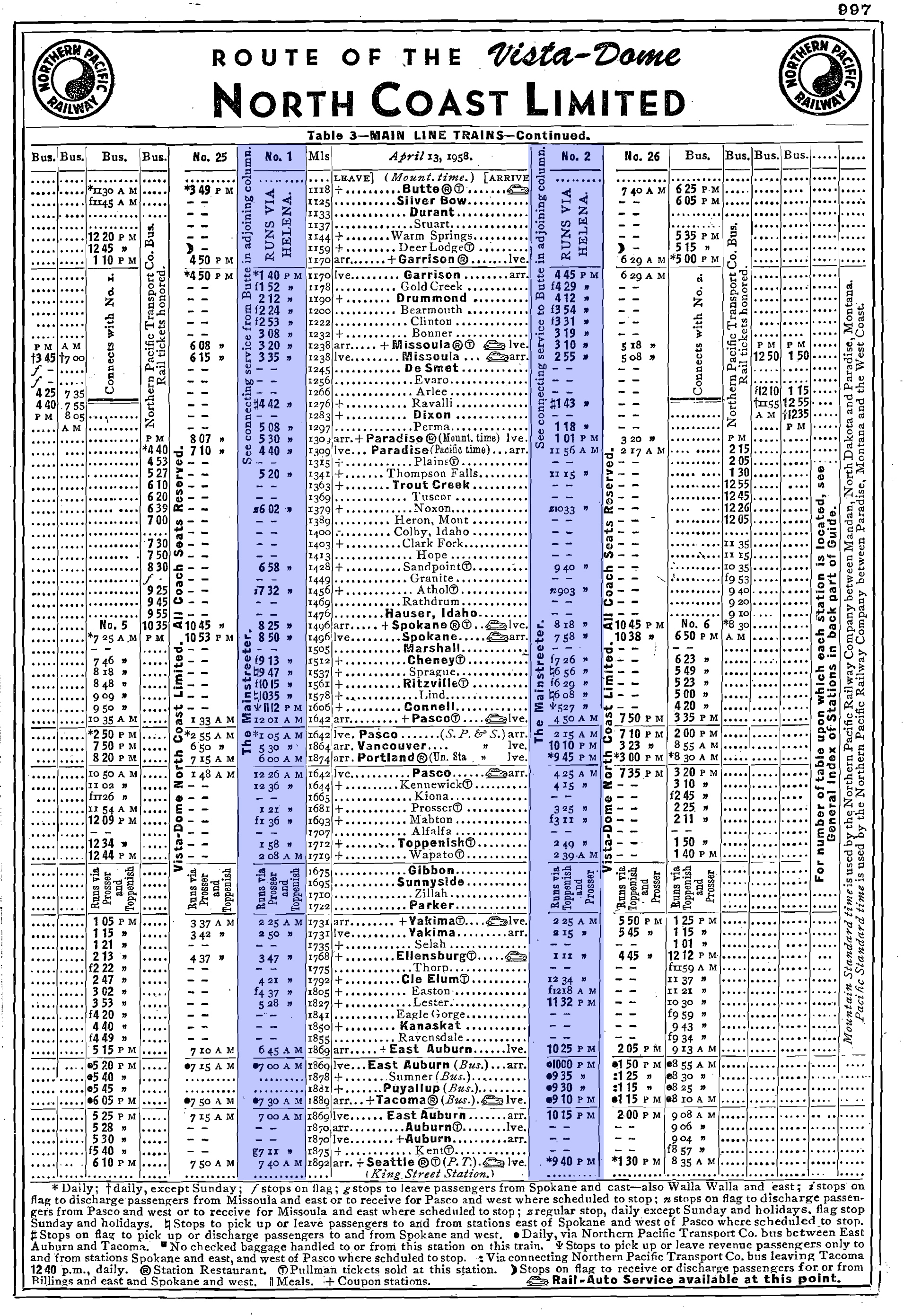 Power for the train during the diesel era could be one of a number of early Electro-Motive Division F models from F3s and F7s to FP7s and F9s.  Interestingly, the NP, aside from the two FP7s it owned, never fleeted any passenger-specific diesels such as Electro-Motive's E models or American Locomotive Company PAs.

Instead, the road stuck with four-axle road-power, such as F3s and F7s (the Santa Fe was also noted for using Fs in passenger service).  In later years the sleeper was dropped for a Slumbercoach and dining service was discontinued for an economy buffet car. 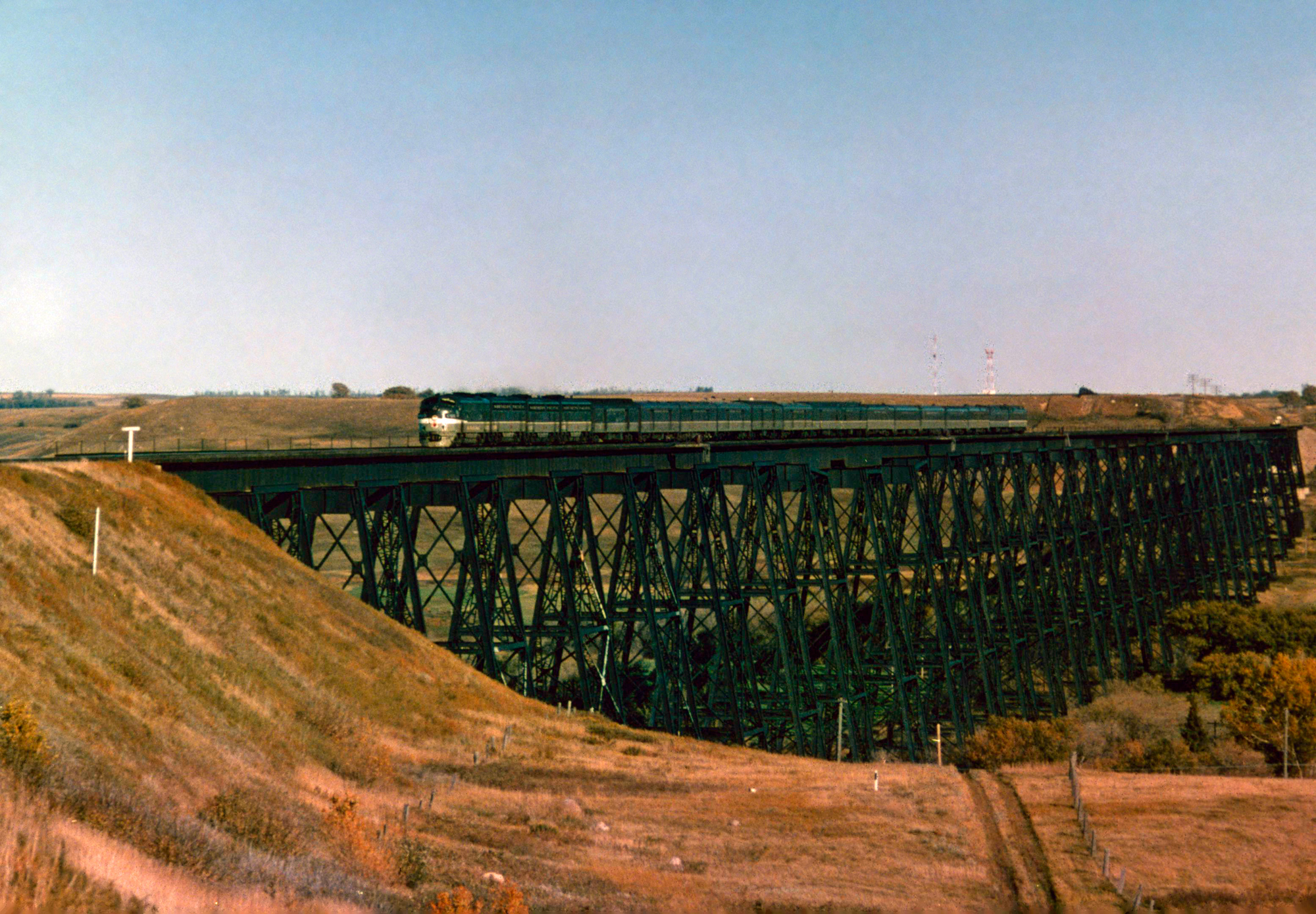 In spite of  declining traffic through the 1950s and 1960s the train remained a somewhat profitable operation, at least until the United States Postal Service cancelled mail contracts after 1967. Even then the Mainstreeter remained on the timetable through the 1970 Burlington Northern merger.

By this point its scheduling had declined to the point that it required 48 hours to complete the journey between Chicago and Seattle.

Further cutbacks took place just prior to Amtrak Day when the train was truncated no further east than St. Paul.  It continued running this schedule until privately operated passenger services ceased after April 30, 1971.