Before Mark Hopkins became successful in the venture with Charles Crocker, Collis P. Huntington, and Leland Stanford to build the Central Pacific Railroad he was only a modest business owner back east.

Perhaps the least known and quietest of the group known as the "Big Four", Hopkins was nonetheless their cornerstone with his impeccable accounting skills and laid back, honest nature.

This, along with the fact that Hopkins was the oldest of the group, he was highly respected by them all and no plan was executed before he saw it first. Even after hitting it big with the construction of the CP, Hopkins remained tight with his money and lived an unassuming lifestyle.

He passed away in the late 1870s due to health complications. Hopkins was not a man one would have expected to be involved with a railroad venture.  After briefly studying law he spent most of his life involved with non-rail business ventures.

Like Crocker, he moved to California following the Gold Rush and helped established the New England Mining & Trading Company for the sale of goods to prospectors on the West Coast. 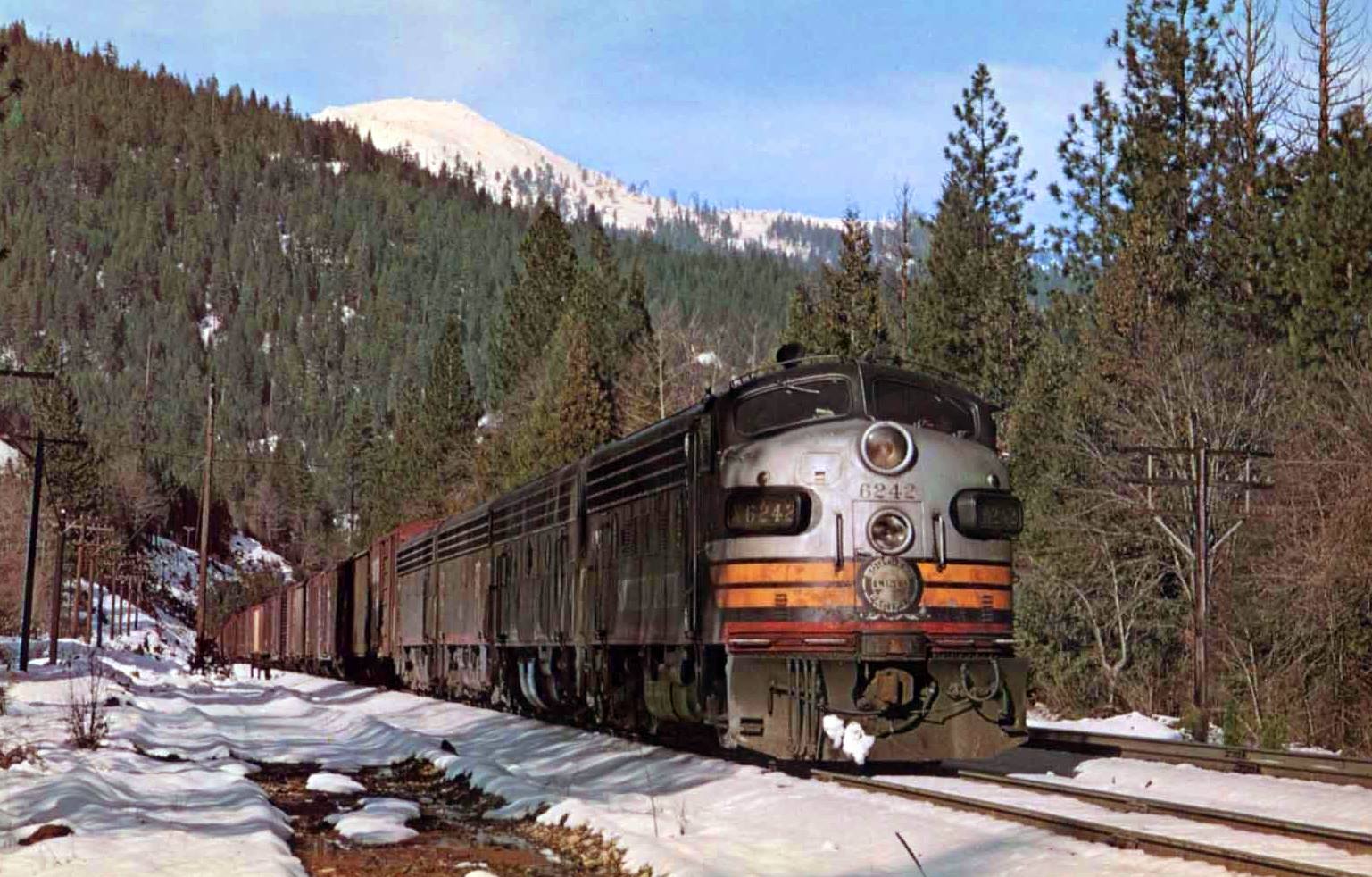 Southern Pacific covered wagons in the "Black Widow" scheme roll downgrade with a manifest through the Sacramento River Canyon along the Shasta Division near Castella, California on January 26, 1964. Tom Gildersleeve photo.

He was an excellent account that greatly aided in the Central Pacific's construction.  Largely self-funded at the outset, it suffered none of the controversy or financial struggle of Union Pacific and its Crédit Mobilier.

Hopkins, whose full name was Mark Hopkins, Jr., was born on September 1, 1813 in Henderson, New York. His family moved to St. Claire, Michigan when he was just 10 in 1824 and he only attended school until the age of 15 when he father passed away in 1828.

From this point forward Hopkins spent much of his younger years working in business, first as a merchant at the age of 16 and soon after starting his own company, Hopkins & Hughes, upon moving back to New York. After this venture he eventually became manager of the firm James Rowland & Company.

While modestly successful with these early careers and also trying a brief but unsuccessful stint in law in 1837, Hopkins, like the rest of the "Big Four" group, decided to head west with the California Gold Rush that hit the country in 1849. 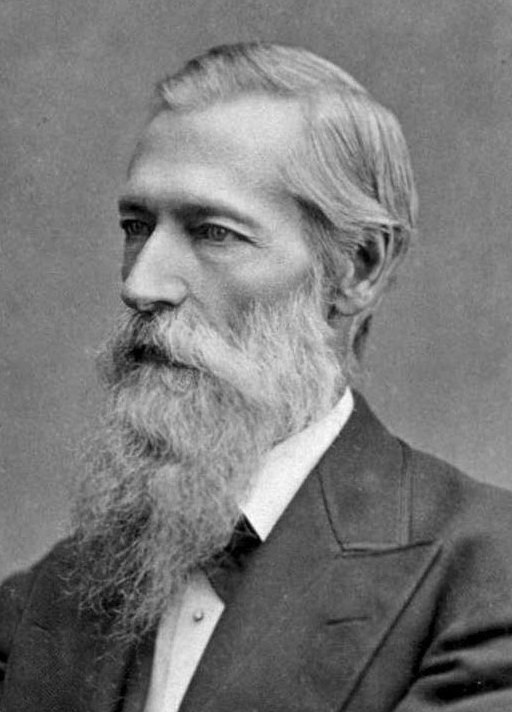 He and 25 other men formed the firm New England Trading & Mining Company in late 1848 as a means to provide goods for miners in California.  Hopkins traveled aboard the shipment of goods himself, which had to sail around Cape Horn of South America (as these were days before the Panama Canal), arriving in San Francisco in August, 1849.

In 1850 he set up a grocery business with friend E. H. Miller, Jr that proved to be modestly successful. However, it was in 1855 that Hopkins started down the path towards a railroad career when he partnered with Collis P. Huntington to open an iron and hardware business. 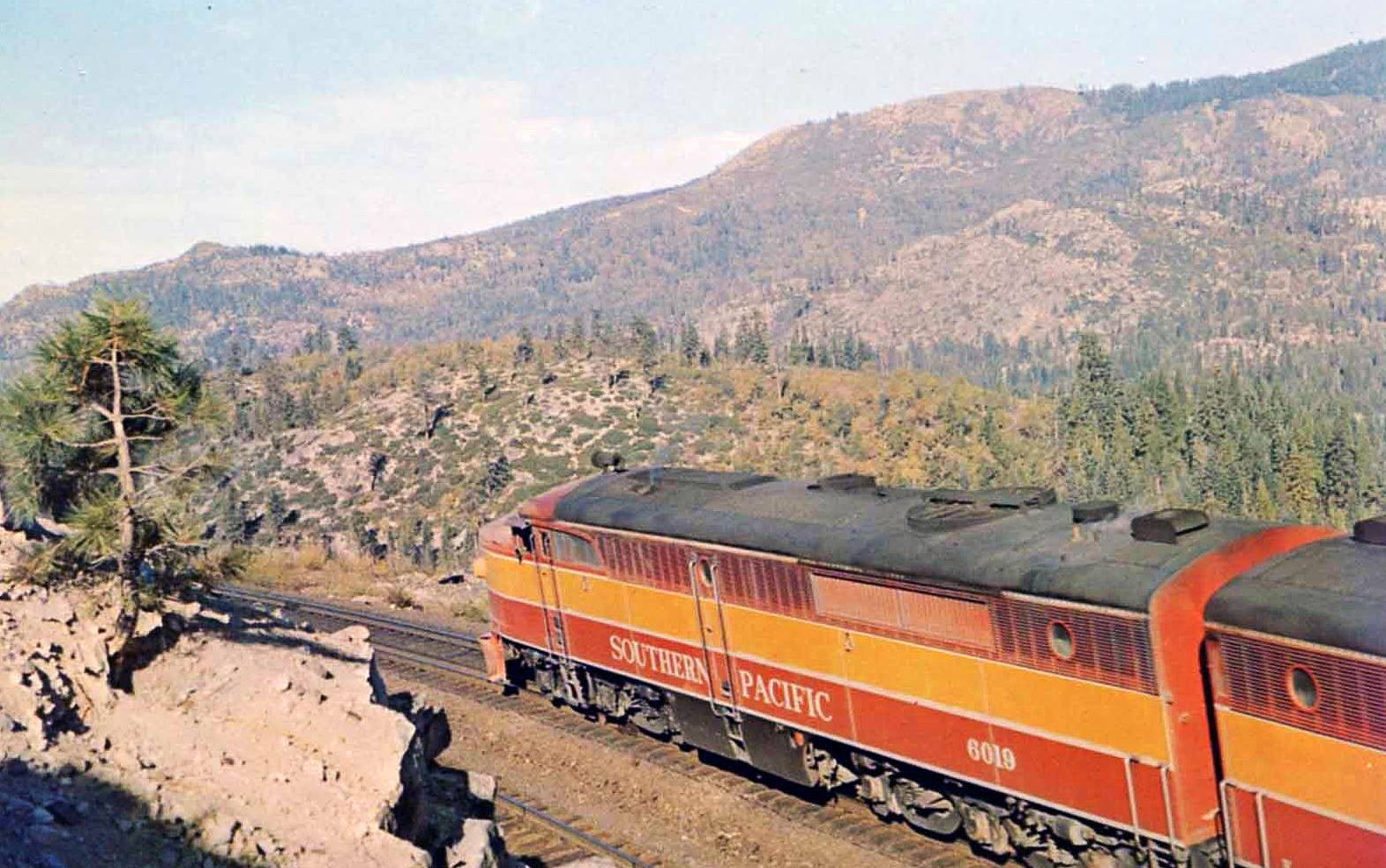 In 1861 the two helped establish the new Central Pacific Railroad, authorized to lay rails across the state of California.  With Abraham Lincoln winning the presidential nomination of 1860 the Pacific Railroad Act, in conjunction with Congress, was born and the new CP would aid in the completion of the new Transcontinental Railroad.

The  Union Pacific was established directly as a result of the act and together they worked to complete the new line. It was Collis P. Huntington, Leland Stanford, Hopkins, Theodore Judah, and Charles Crocker who agreed to mutually help finance the CP although Judah was bought out by what would become the "Big Four" (Crocker, Stanford, Hopkins, and Huntington).

For Hopkins' part he was brought in by Huntington to be treasurer, who held very high esteem in him due to his frugal nature and meticulous accounting skills. 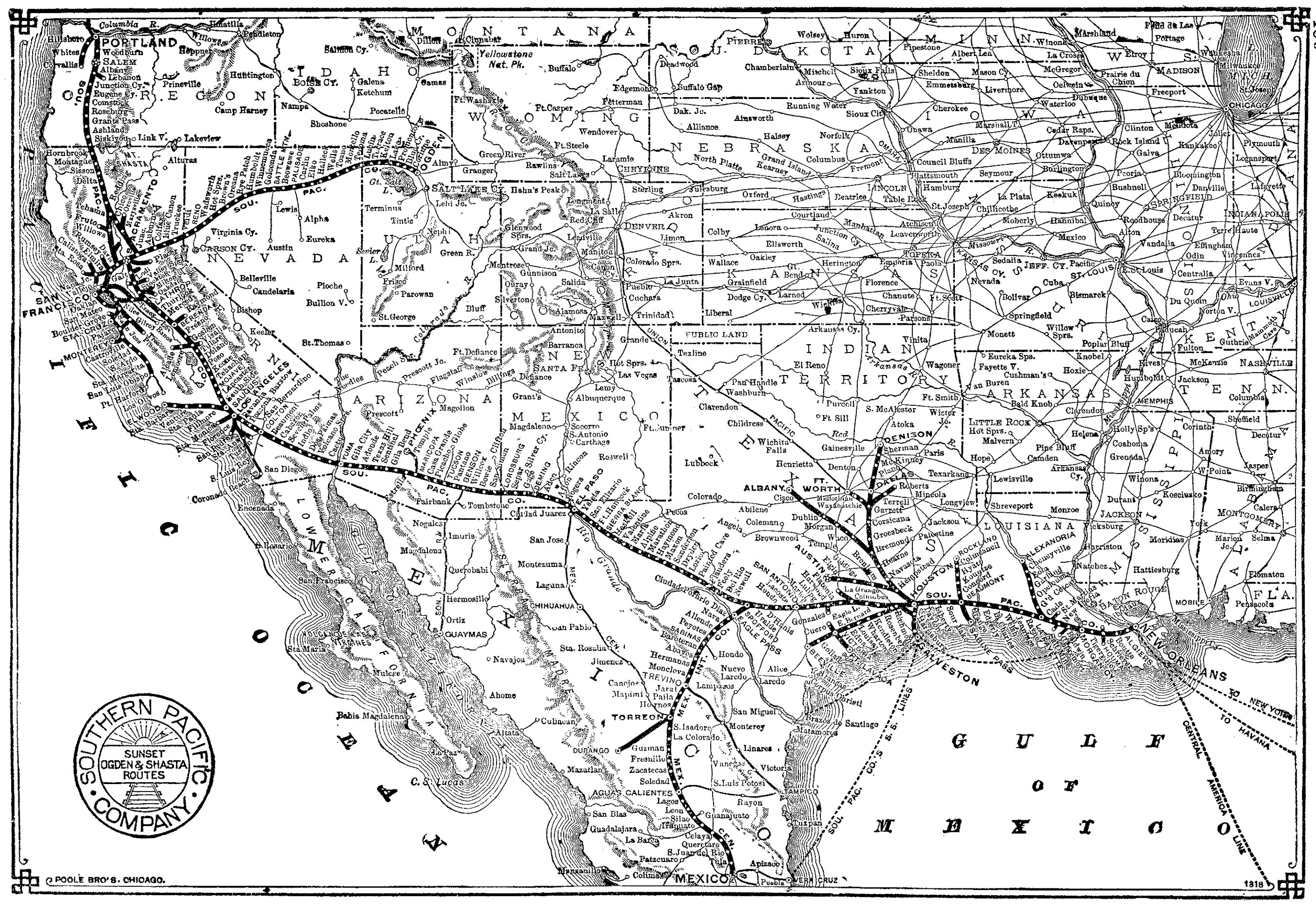 While building the CP turned out to take much longer and cost much more than originally envisioned it was completed on May 10, 1869 at Promontory, Utah and linking with the Union Pacific system.

Four years prior to this milestone the Southern Pacific had been established to connect San Francisco and San Diego, California. In September 1868, Collis P. Huntington and the rest of the "Big Four" bought out the original founders of the SP and would combine the operations of the Central Pacific by 1870.

By the late 1870s the railroad was sprawling out across Southern California and served the state's largest markets including its line through the Southwest, which reached El Paso, Texas by the early 1880s. Throughout the rest of the 19th century the Espee continued to spread throughout the West and Southwest, reaching northern Oregon and serving most of that state's largest cities by the late 1880s.

By the 20th century the railroad continued to expand and was by this time well entrenched into the Southeastern markets of New Orleans and the Gulf Coast (it also leased the CP in the 1920s, eventually merging the railroad into its system with its main line becoming the Overland Route). 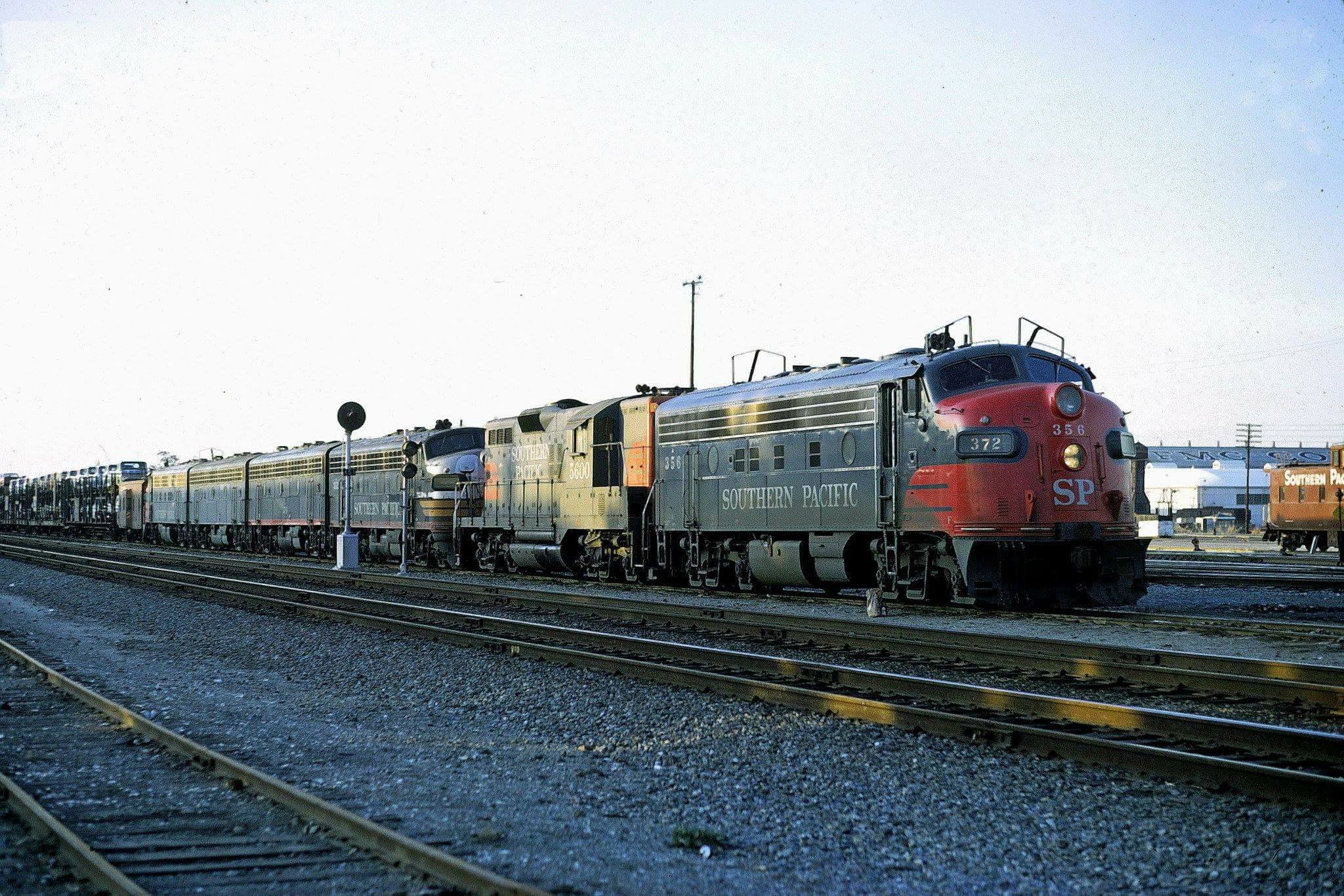 A long string of Southern Pacific covered wagons and GP9 #5600 ready to depart eastward from Newhall Yard in San Jose, Califorina during the summer of 1966. Drew Jacksich photo.

Mark Hopkins remained the Southern Pacific/Central Pacific treasurer until his death in March, 1878 due to health issues while in Arizona.  At that time, according to the book, "Civil War America: 1850 To 1875" by Richard F. Selcer, his net worth was estimated at $20 million.

He became so highly respected by the other three men that he was also known as "Uncle Mark" and was always given final say on impending projects before they happened. Hopkins also remained a close friend of the men, particularly Huntington who he remained a partner with in their ventures outside of railroading until he passed away (Huntington always considered him the most honest man he ever knew).