The Reading Terminal and Market, located in downtown Philadelphia, was the railroad's most famous and renowned station.

Along with functioning as a passenger facility the complex also served as Reading's main headquarters until it declared bankruptcy during the early 1970s and later became part of Conrail.

While the Reading was never truly large enough to be a major competitor in the intercity passenger market it did field one famous streamliner during the "Silver Age," the regional Crusader, serving business clientele between Philadelphia and Jersey City/New York.

The building's greatest asset was in commuter service as the railroad moved thousands on a daily basis within Philadelphia and its surrounding suburbs.

Today, this impressive complex still stands including its remarkable train shed as an extremely popular market and convention center.

In addition, it has been honored with the rare distinction as a National Historic Landmark, forever protecting its future. 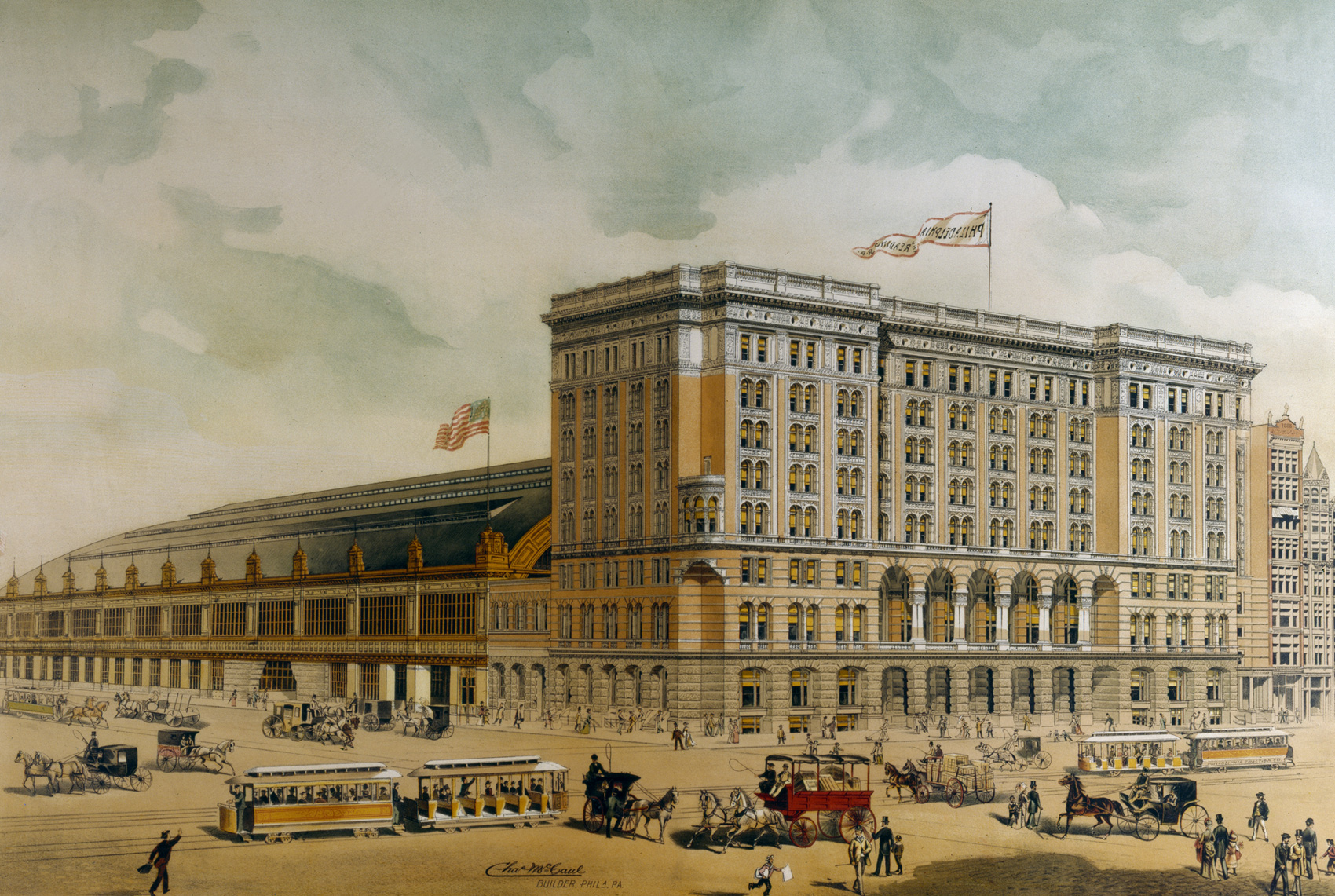 A lithograph by Charles McCaul of Reading Terminal around the time it opened for rail service on the Philadelphia & Reading.

A History Of Reading Terminal Market

The Reading Railroad has an interesting albeit somber corporate history.  It was formed during the early days of the industry and blossomed into the Northeast's most powerful regional system thanks to Anthracite coal.

This clean burning, very hard type of black diamond is largely centralized in Northeastern Pennsylvania and the Reading would eventually captured three-quarters of the market by the late 19th century.

It began as the Philadelphia & Reading, chartered on April 4, 1833 by the Pennsylvania legislature to construct a line along the Schuylkill River.

Its first major achievement occurred in 1838 when it opened for service between Reading and Pottstown while a link to Philadelphia was established a year later.

By 1842 the P&R had opened northwesterly to Pottsville, operating a 93-mile route which became its  primary main corridor.

The city of Philadelphia was established as its primary headquarters although Reading, Pennsylvania was always its operational nerve center with branch lines radiating in all different directions.

At its peak the railroad operated nearly 1,500 route miles, most of which were branch lines acquired by purchasing smaller systems.

he Reading would also open western extensions beyond Harrisburg reaching Shippensburg, Lurgan, and Gettysburg where it established interchanges with the Baltimore & Ohio and Western Maryland.

In addition, the railroad connected with virtually all of the Northeast's other important anthracite roads such as the Lehigh Valley, Lackawanna, and Erie.

In 1890 Archibald McLeod was elected president, by which time the P&R was a powerful and wealthy railroad thanks to its dominance of the anthracite fields.

Under his direction the company looked to transform itself into the Northeast's most powerful system.

It acquired several large lines including the Lehigh Valley, Jersey Central, and Lackawanna with attempts to expand into New England. 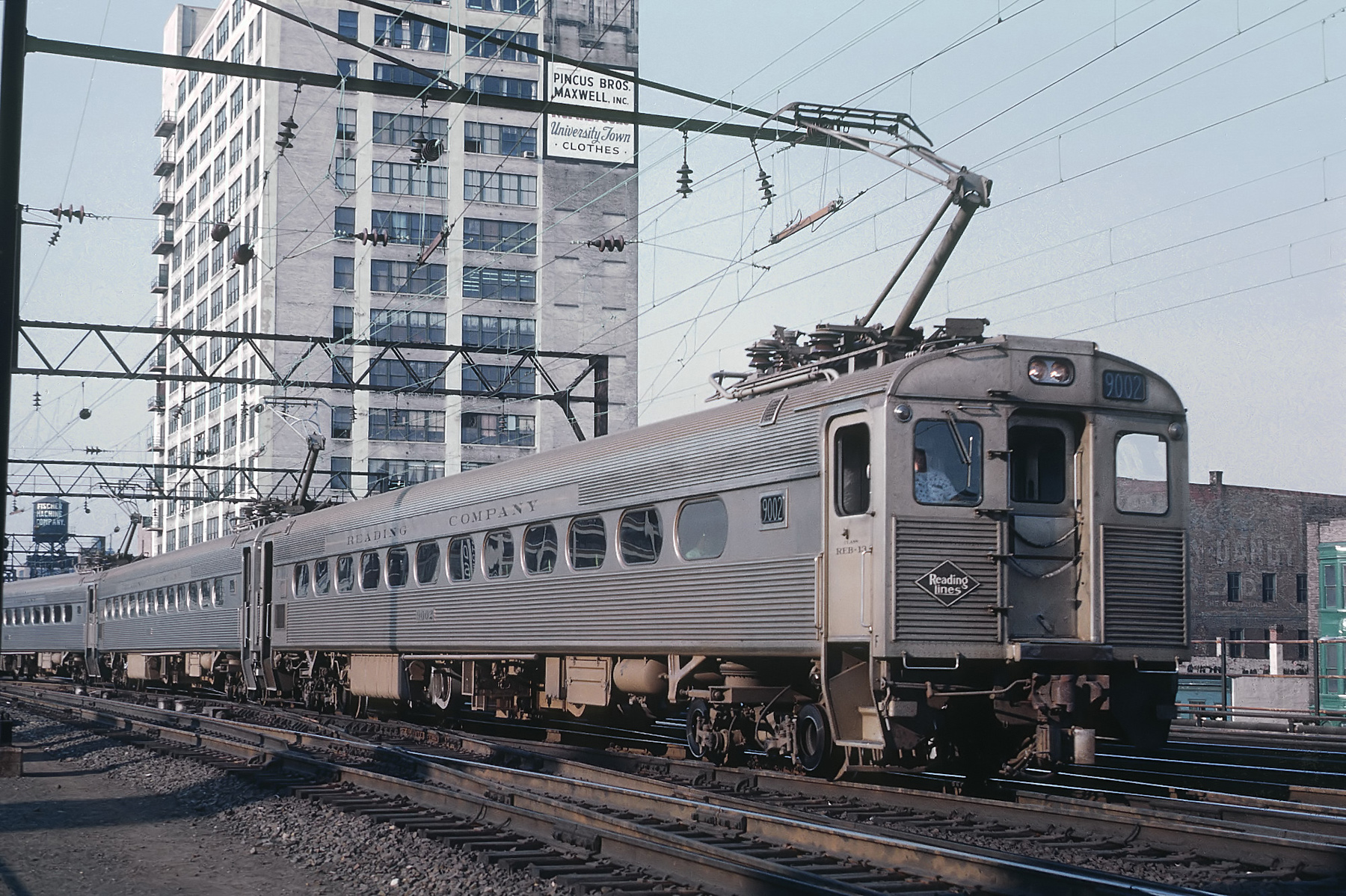 Reading MU's are inbound to Reading Terminal as they pass what are today the Grandview Condominiums in September, 1964. Today, this section of the elevated railroad is the approach to the parking garage of Philadelphia's Convention Center. Roger Puta photo.

To display its power and prestige McLeod ordered the construction of Reading Terminal, the railroad's grand entrance into its home city of Philadelphia.

While the Pennsylvania Railroad was a formidable opponent here, having already opened Broad Street Station (later replaced with 30th Street Station) and the Baltimore & Ohio Railroad unveiled its own facility (24th/Chestnut Street) in 1888, the Reading's new complex rivaled that of its neighbors.

Located at the corner of 12th and Market Streets construction on the terminal began during the early 1890s.

It was designed in two distinct phases; the concourse and head house was the creation of architect Francis H. Kimball while the Wilson Brothers Architecture & Engineering Company oversaw the train shed and approaches.

For trains to reach the terminal the railroad built a massive raised viaduct (known as the Reading Viaduct) one-story above the street.

In a situation that was almost surely unique to this terminal the railroad came under serious opposition from local public markets then located at appropriately named Market Street.  Even by the late 19th century the city had a long history with street venues.

According to the Reading Market's website the first impromptu markets opened near Front and High (Market) Streets in 1680 after farmers and fisherman brought their goods in for sale from southern New Jersey.

As the years passed the system became better structured and organized with city passing ordinances to oversee their operation.  By the 19th century they were a well-established part of Philadelphia life.

During 1890 the Philadelphia & Reading acquired the 1110 block of Market Street with intentions to consolidate its four smaller depots within city limits into one large, centralized terminal. 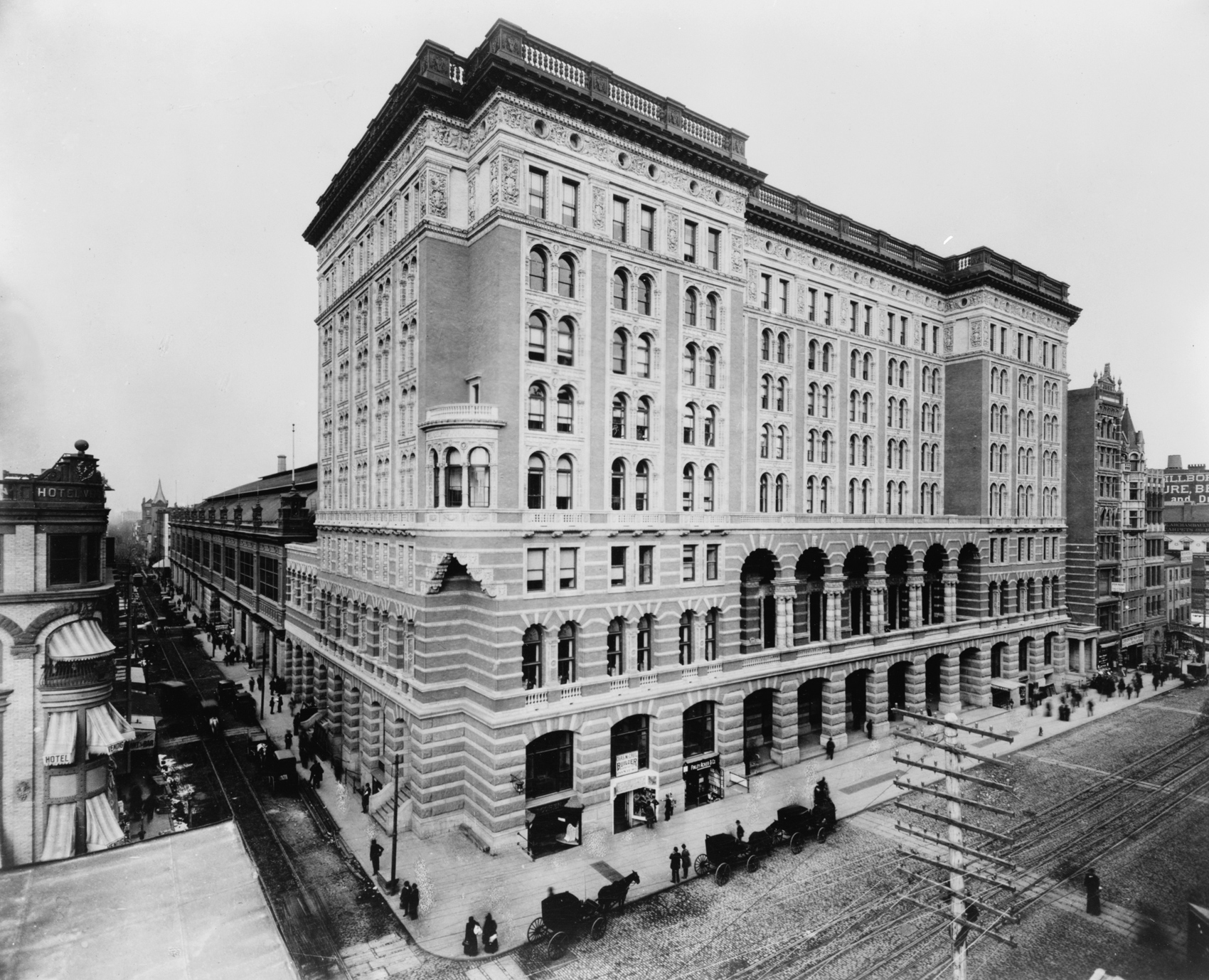 This decision, of course, caused an incredible uproar by local vendors who refused to have the market relocated.

In the end the P&R and merchants compromised by having the market situated beneath the building's train shed and staging track.  This plan wound up costing the railroad an additional $1 million.

he terminal's interior was quite ornate with marble used throughout, featuring wood flooring and cast iron decorations while the exterior was adorned in pink granite with white granite trim giving the building natural color without using paint or other pigments.

The terminal opened to the general public on January 29, 1893.  Given the timing of the its construction the station witnessed the grand "Golden Age" of passenger rail travel, which occurred from the start of the 20th century through the 1920s.

Despite its heavy use as a commuter facility the building did see a handful of regional, intercity trains. Along with the Crusader these included others like the King Coal, North Penn, Schuylkill, and Wall Street.

During the 1930s the Reading began electrifying its suburban lines within the greater Philadelphia region extending from downtown Reading Terminal to Norristown, Chestnut Hill, Doylestown, Hatboro, and West Trenton.  Interestingly, even as late as the 1960s it was continuing to expand these operations! 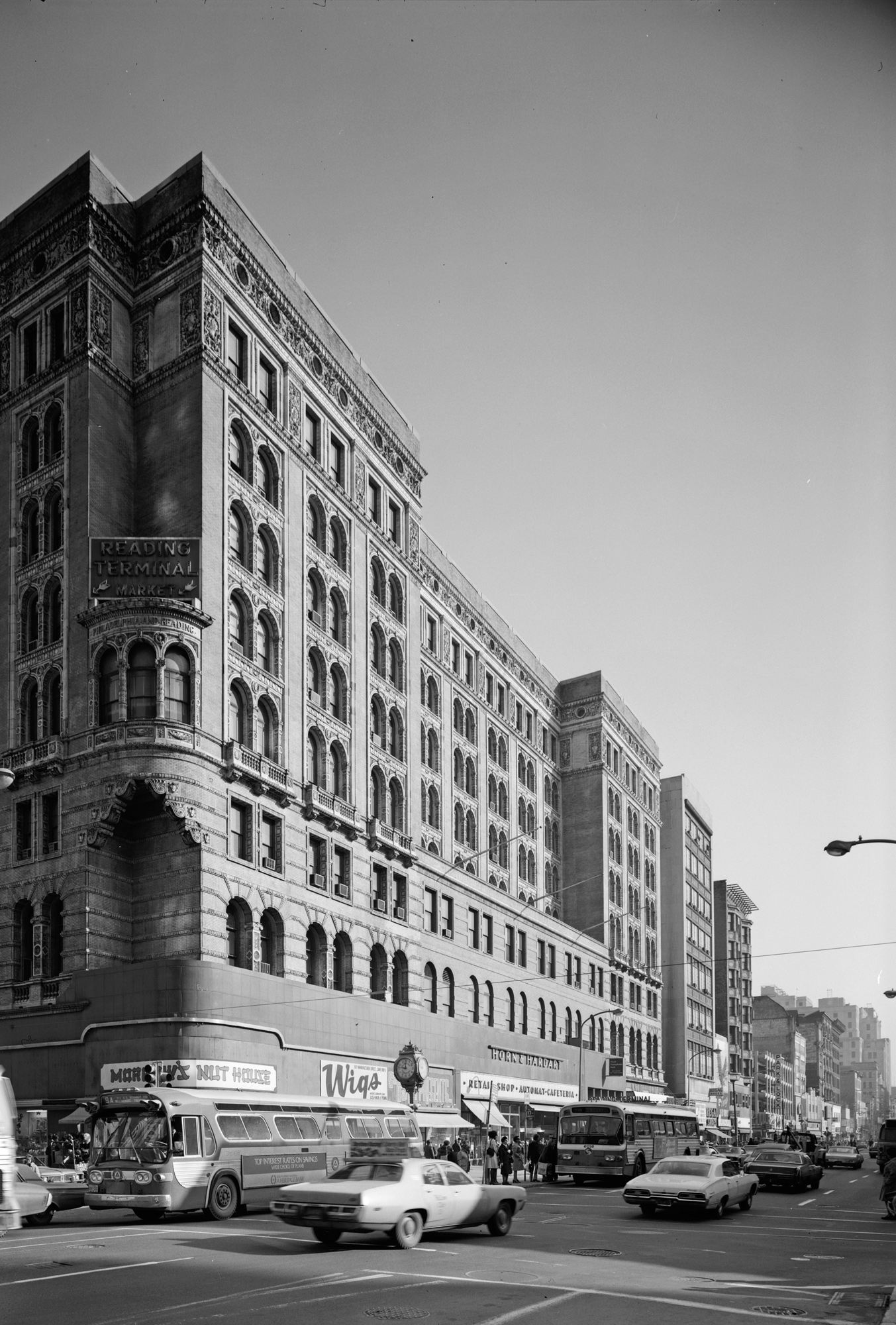 A view of Reading Terminal from the 1960s showing the Northeast façade as seen from Market Street.

Ironically, the opening of Reading Terminal signaled the end of the company's dominance and wealth.  The financial Panic of 1893 brought down the Philadelphia & Reading empire.

The newly formed Reading Company rose from the ashes and despite losing control of its New England properties and most others in the Northeast it held onto the core P&R network.

It later acquired control of the Jersey Central before coming under the direction of the much larger Baltimore & Ohio.

The latter paid the bills and as anthracite coal dried up the company fell on hard times by the 1960s.  The merger of the Pennsylvania and New York Central, creating Penn Central, was a disaster.

The conglomerate declared bankruptcy in 1970 and brought down most other Northeastern railroads with it.  The Reading filed for reorganization on November 23, 1971. 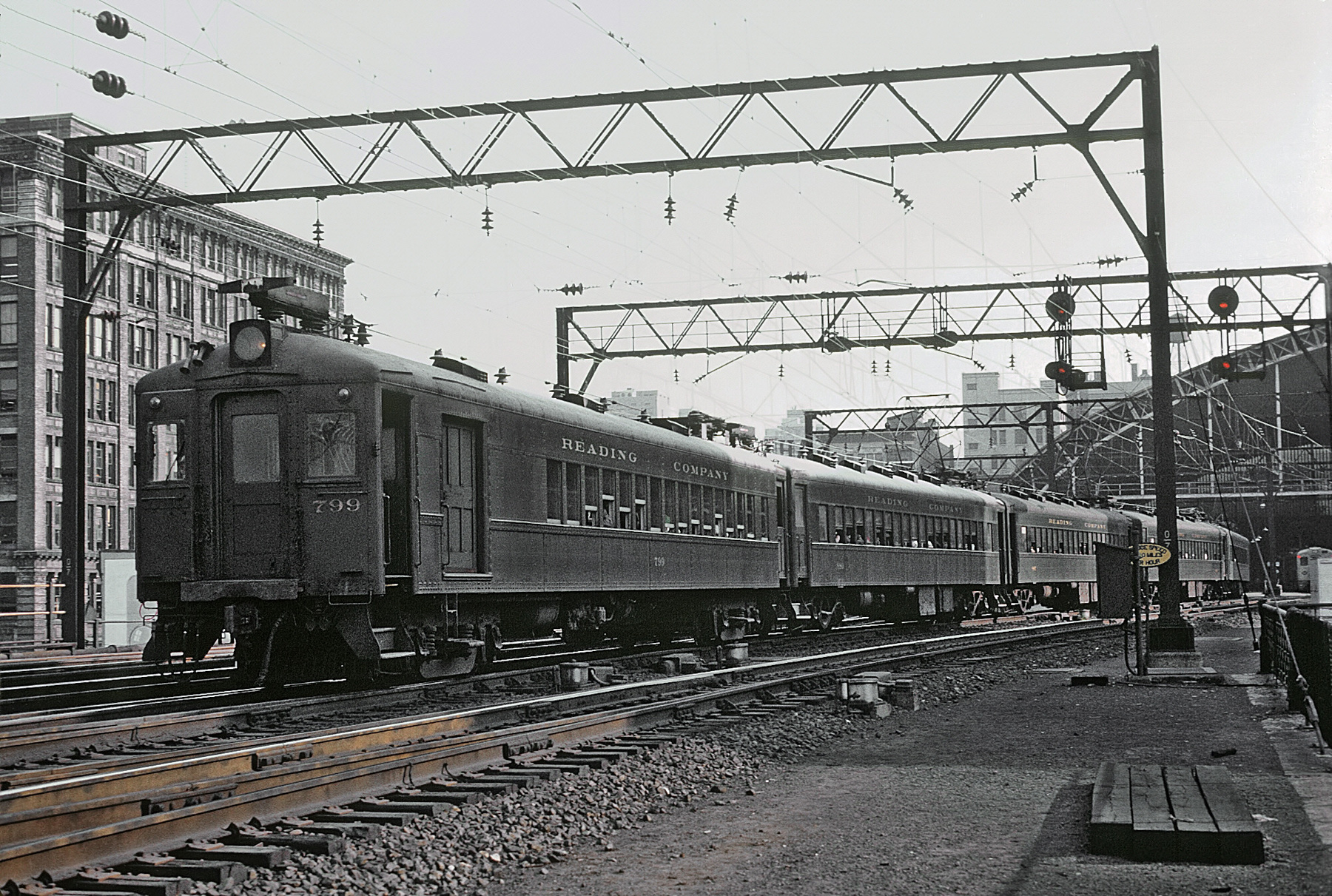 Reading commuter MU's are outbound from Reading Terminal in September, 1964. This elevated section is now part of the Convention Center. Roger Puta photo.

After the creation of Conrail in 1976 (in which the Reading was included) the terminal continued to see use under SEPTA (the Southeastern Pennsylvania Transit Authority) until 1984 when a new structure, Market East Station, replaced it.

Following this change the elevated approach track connecting the terminal with the Reading's network were abandoned and partially demolished. However, the station itself would suffer a better fate.

In 1976, it, along with its train shed were forever protected when they were named a National Historic Landmark (it had partially been saved in 1972 when named to the National Register of Historic Places).

Today, the complex is part of the Pennsylvania Convention Center's main headquarters. While trains have not served the terminal for more than three decades now the Reading Viaduct is still mostly intact, albeit derelict and abandoned.

Inside the terminal visitors can glimpse what it must have been like to catch a train decades ago. 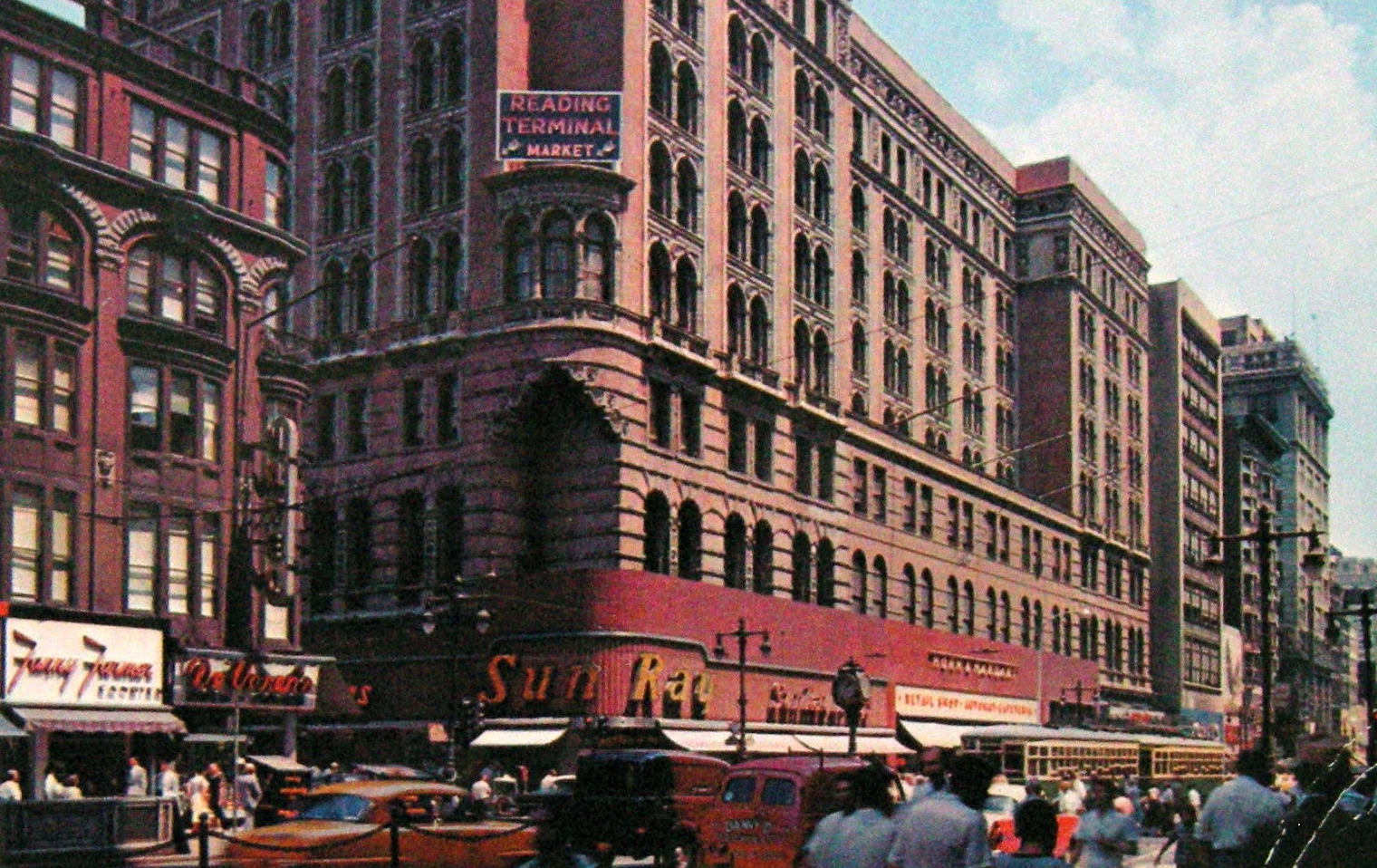 Another view of Reading Terminal at 12th and Market Streets during the 1950s.

Aside from its preserved architecture a huge mural adorns one wall depicting the Crusader and a "Camelback" locomotive operating in commuter service beneath the massive train shed.

In addition, the market's logo features the classic Reading diamond complete with its company colors of green and gold.

Today, the Reading Terminal Market is a multi-use building that includes, hotel space, shopping, restaurants, meeting rooms, and of course the Reading Market.

So, if you are ever vacationing in Philadelphia, along with visiting 30th Street Station, this is another historic railroad landmark that you do not want to miss seeing!

One a final note, if you happen to watch Andrew Zimmern's "Bizarre Foods" program on the Travel Channel he stopped by the Reading Market.

Despite the fact that it has lost its status as a train station the building is still abuzz with activity and very popular.  To visit the market's official website please click here.