One of the more interesting devices developed for railroad use during the early diesel era wasn't a locomotive at all but the Mars Light, a safety mechanism designed by Jerry Kennelly.  The light oscillated to warn bystanders of oncoming trains (as well as crews from an approaching train) but was also meant for use by fire departments.

It became most popular in the railroad industry for use in passenger and commuter service where trains would regularly be stopping and starting from busy train stations.

The Mars came in a wide range of patterns and colors generating enough demand that Kennelly eventually formed his own company to sell his patented product.  One line in particular, the Chicago & North Western, used the Mars extensively even on steam locomotives which was quite fascinating.

Due to the rise of ditch lights, which became mandatory on all regular service locomotives in the 1990's, the Mars and other oscillating lights have been retired from main line operations.

However, you can still find this interesting facet of history on preserved locomotives at various museums around the country. 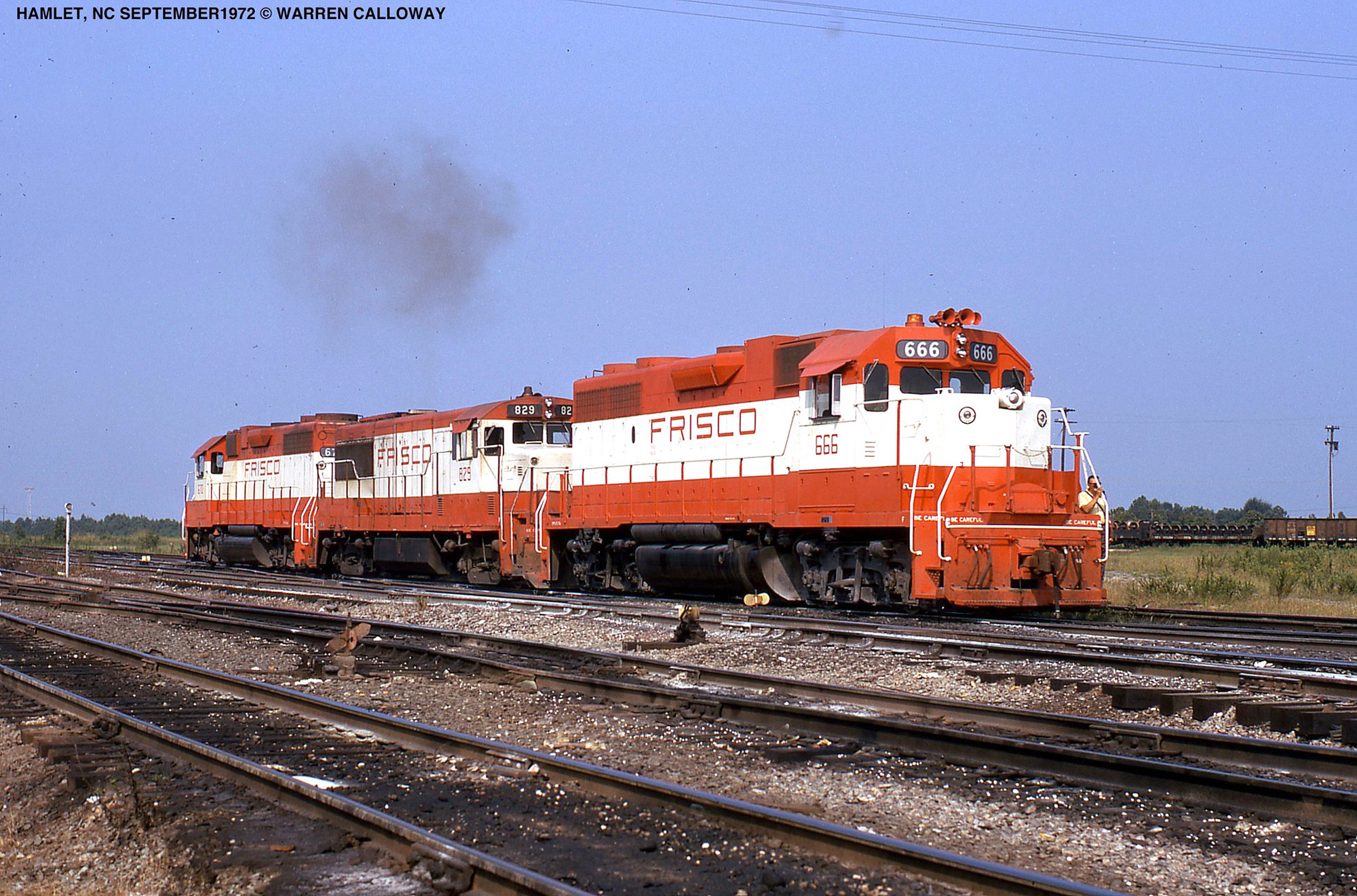 A pair of St. Louis-San Francisco GP38-2's, only a few months old in this scene, bracket a U25B at Hamlet, North Carolina in September, 1972. The units were operating on the Seaboard Coast Line at the time. The GP38-2's were equipped with a center Mars Light. Warren Calloway photo.

The history of the Mars Light is tricky and difficult to track down.  The company which produced it was the Mars Signal Light Company, founded by Jerry Kennelly in the late 1930s after successful tests with his product on the Chicago & North Western in 1936.

On February 16, 1937 he formally received a patent for his design beginning with what he termed the "FL" model.  Kennelly was a Chicago firefighter and believed a highly visible, rotating light would be beneficial not only for fire departments but also railroads.

Unfortunately, his company was said to have little interest in advertising their products, which from a historical context makes it difficult to trace.

Additionally, Mars did not seem to catalog many of its standard models and instead custom-tailored them to either specific locomotives or by request from railroads.  For instance, some designs were portable while others mounted directly onto locomotives. 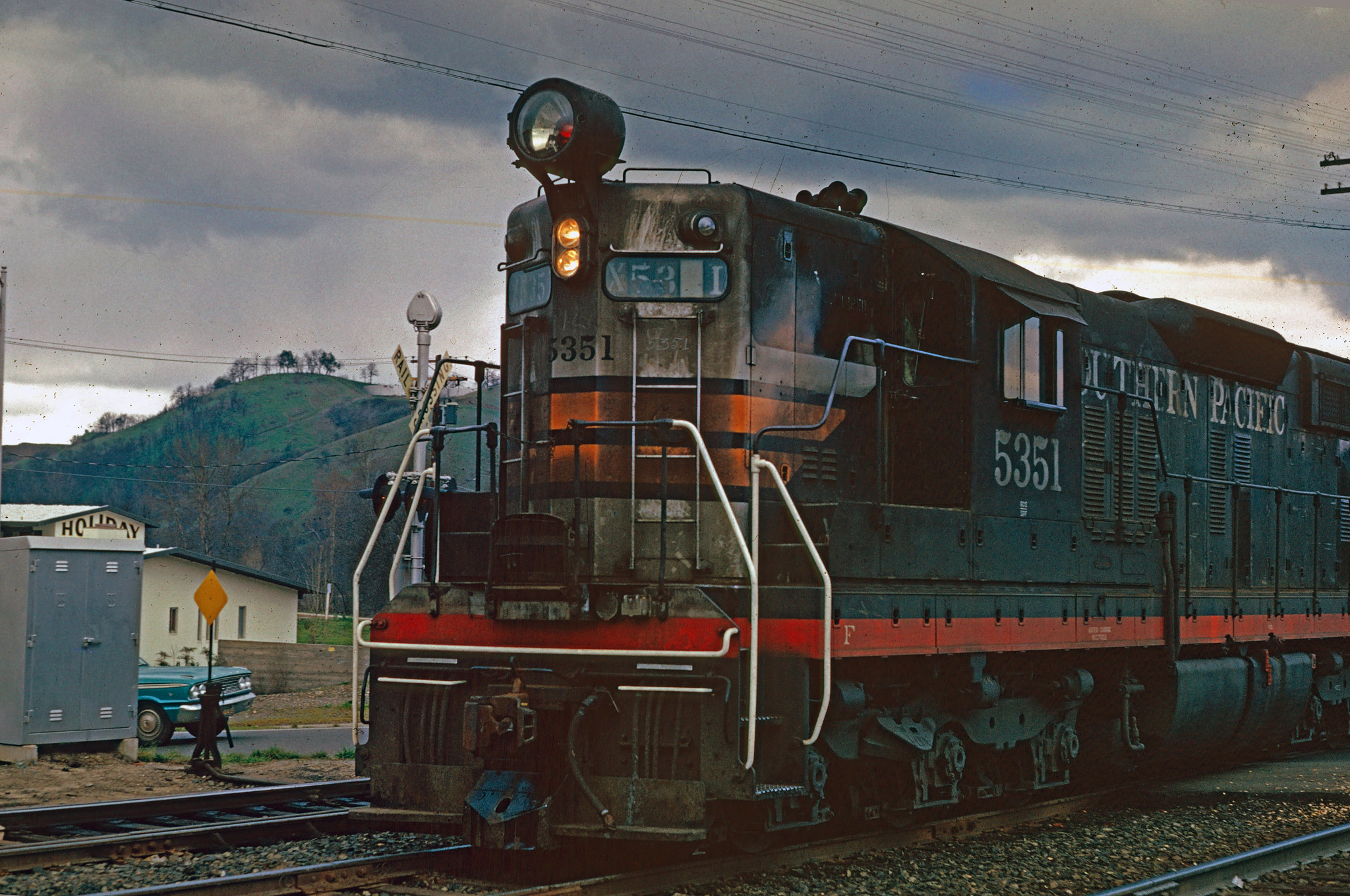 A grimy Southern Pacific SD9, equipped with a big "trash can" Mars Light, is seen here in Roseburg, Oregon during April, 1964. The SP was a big proponent of Mars and Gyralites to improve safety; many of their locomotives featured them. Drew Jacksich photo.

One of the more interesting applications of the Mars Light was its use on steam locomotives.  Most roads tended to mount them either on top of the smokebox or towards the center, above the primary headlight.  Wherever they were situated it made for an interesting look.

On the C&NW, the railroad is said to have used Mars' model SB-R-250 on its 4-6-2 Pacifics, notably in commuter service.  This type used a red lens and featured a reflector and incandescent bulb all of which was housed in a circular casing.

However, it becomes difficult in distinguishing Mars models since the SB-R-250, for example, could be fitted with either a red or white lens.  The latter, for instance, was used almost exclusively by the Nickel Plate Road on its 2-8-4 Berkshires.  Of note is that Union Pacific's operating Northern, #844, also carries an SB-R-250 sporting a red lens.

The Mars catalog and how it listed its products is still not entirely known although some designations which are include the following:  "SB" referred to Sealed Beam, "WR" was short for a White-Red, and if a single-digit number followed this was said to refer to the number of bulbs used.

There was also normally a trailing number that typically described the specific model type.  What makes its system even more confusing, however, is its hazy references.  The SB-R-250 highlighted above used by the Nickel Plate, for instance, used a white lens even though the "R" described it as having a red lens.

The confusion, however, goes even further beyond this.  The company also had a wide range of products that would not fit the above designation such as the OS-250-RE-14, AWR-12-2, WR-5000-A, and others.  In any event, it seems railroads had a particular model or type that they preferred on their locomotives.

During the diesel era a Mars Light looked much more attractive as it was flush-mounted on the nose of cab units, particularly Electro-Motive's E and F series.

On the Southern Pacific the company was famous for its use of Mars' vertical SBW/R-2-300/1 models that would sit directly atop the short, high-hood of its early road-switchers such as GP7s, GP9s, SD7s, and SD9s.

Over the years the Mars Light came in a wide range of orbiting displays from the common figure-eight pattern to vertical or horizontal oscillating  motions all of which were designed to clearly and easily catch the attention of bystanders or motorists to keep them clear of railroad rights-of-way.  During this time the lights featured a single bulb or up to three in different colors (normally red or white).

While the Mars Light was the most common form used during its era the company did have competition from the Pyle-National Company, which used its Gyralight that functioned somewhat similarly except that instead of oscillating it moved in an elliptical pattern.

Between the late 1960s and early 1970s Mars opened a location in Naples, Florida and while there the company was purchased by the Trippe Light Company, which renamed itself as Tri Lite Mars or Tri Lite, Inc.  Today, the operation is again back in Chicago and still produces warning lights and sirens although no longer designed for railroad applications.

Because Mars Lights often required added maintenance most railroads stopped using them by the 1980s.  However, they can still be found on many historic locomotives at museums and excursion railroads, more as a novelty than anything else.