In the study of classic American railroads, one soon realizes most were not built as singular systems under a common name.  Instead, they were pieced together via a multitude of smaller lines acquired predominantly during the 19th century.

The New York Central, in particular, was a conglomeration of numerous railroads, most of which were brought under a common banner by Cornelius Vanderbilt.

The latter became another vital component of the modern New York Central, eyed during the Vanderbilt era and fully integrated into its network after the Commodore's passing.

While the Michigan Central's 1,700 mile system served most of its home state, its most important asset was a direct route to Chicago via Buffalo and Detroit through southern Ontario.

This corridor became a crucial component of the modern NYC.  Following the Penn Central merger and, particularly into Conrail years, the road's value declined.  Many segments were abandoned in the 1980s, in particular the Canadian Southern corridor.

Perhaps the railroad's greatest lasting legacy was Michigan Central Station in Detroit.  After sitting derelict for 30 years it is being fully restored as a Ford office complex.

For most of its corporate life, the Michigan Central Railroad was a subsidiary of the New York Central System.  However, the company was, indeed, established as an independent.

According to the booklet, "Michigan's Railroad History," compiled by the Michigan Department of Transportation, the Michigan Central's genesis can be traced back to one of the state's earliest railroads.

The Detroit & St. Joseph Railroad (D&StJ) was chartered on June 28, 1832, intended as an intrastate system to open the then-Territory of Michigan (it would go on to achieve statehood on January 26, 1837) from Detroit to Lake Michigan (St. Joseph).

Like many small systems of that era, the D&StJ struggled to acquire the needed financing to begin construction.  Nearly four years later the railroad finally broke ground at "Kings Corner" in Detroit on May 18, 1836.

Even then, the project continued to languish.  The city of Detroit pumped $50,000 into the endeavor but there was little further headway.  Finally, the newly formed state of Michigan acquired the D&StJ in 1837 and invested $5 million into the endeavor, an astronomical sum of money for that time.

Like many states, Michigan quickly realized how railroads were revolutionizing land travel; they could operate at speeds never before imagined and in virtually any type of weather, year-round.

During a time when states fiercely competed with each other for economic one-upmanship the railroad was viewed as the future in transportation.  With Michigan's funding, the D&StJ reached Jackson by December 29, 1841, 76 miles to the west. 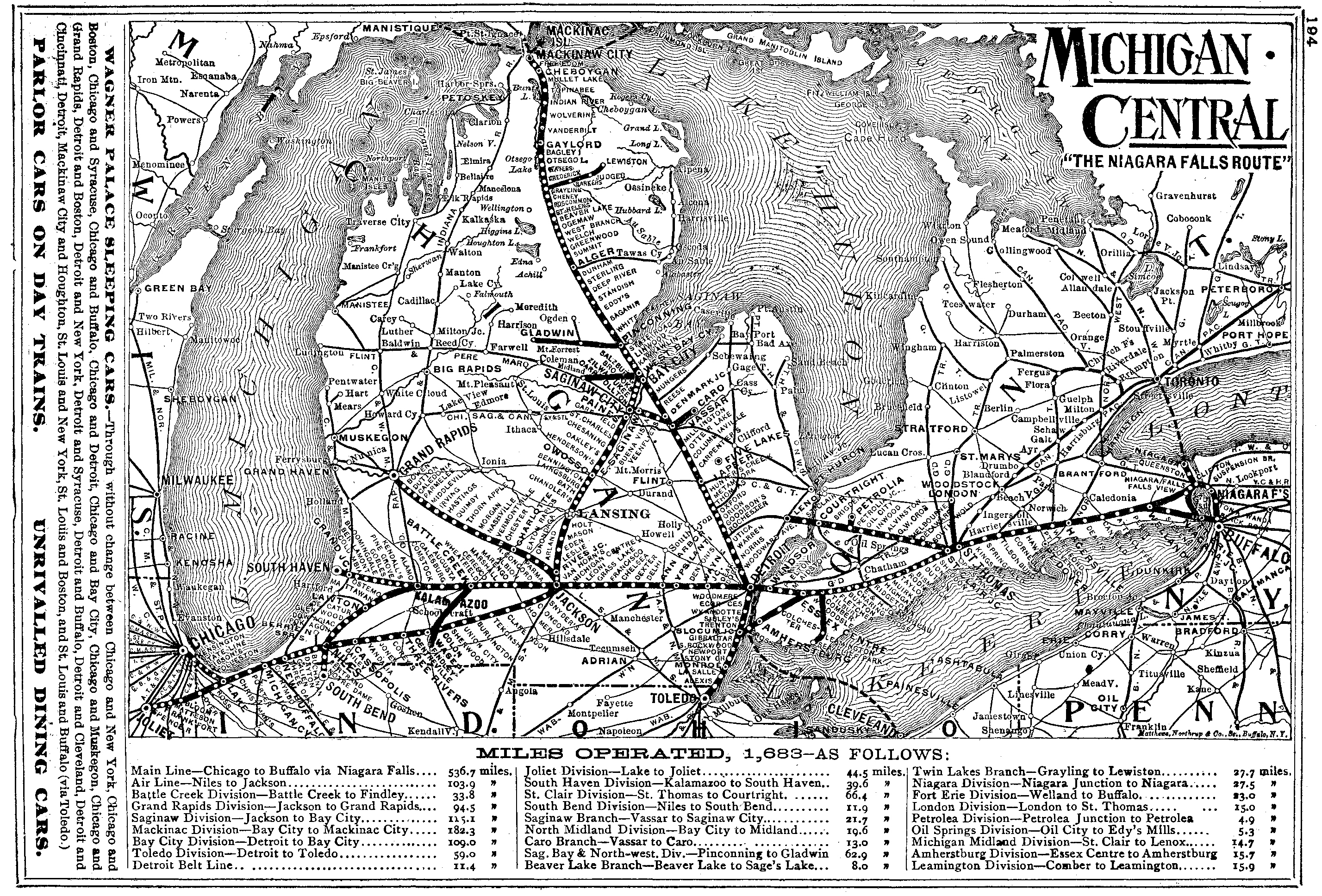 An 1893 system map of the Michigan Central Railroad. American-Rails.com collection.

Alas, the money again ran out and the railroad's future appeared in doubt once more.  In 1846, the newly incorporated Michigan Central Railroad was formed, acquiring the D&StJ from the state for $2 million.

At the time of the transaction, rails had reached Kalamazoo, 144 miles west of Detroit.  Under new ownership work on the project continued at a slow, but steady pace.  Finally, on April 23, 1849 the Michigan Central was completed to New Buffalo, situated along Lake Michigan.

During construction, ownership moved the western terminus roughly 27 miles to the south with intentions of eventually reaching Chicago. The railroad was 218 miles in length and the first completed across the state.

To reach the Windy City the Michigan Central acquired the small Joliet & Northern Indiana Railroad in 1851, which was then completed to Kensington, Illinois (South Chicago) the following year.  To facilitate access into downtown Chicago, the MC utilized Illinois Central trackage rights.

According to the railroad's listing in the 1893 "Official Guide Of The Railway And Steam Navigation Lines In The United States And Canada," its Detroit-Chicago main line was 285 miles in length.

Following completion of this new corridor the railroad operated its first train between the two cities on May 21, 1852.  The company made headlines in 1855 as the first to employ the new telegraph into widespread use to control train movements. 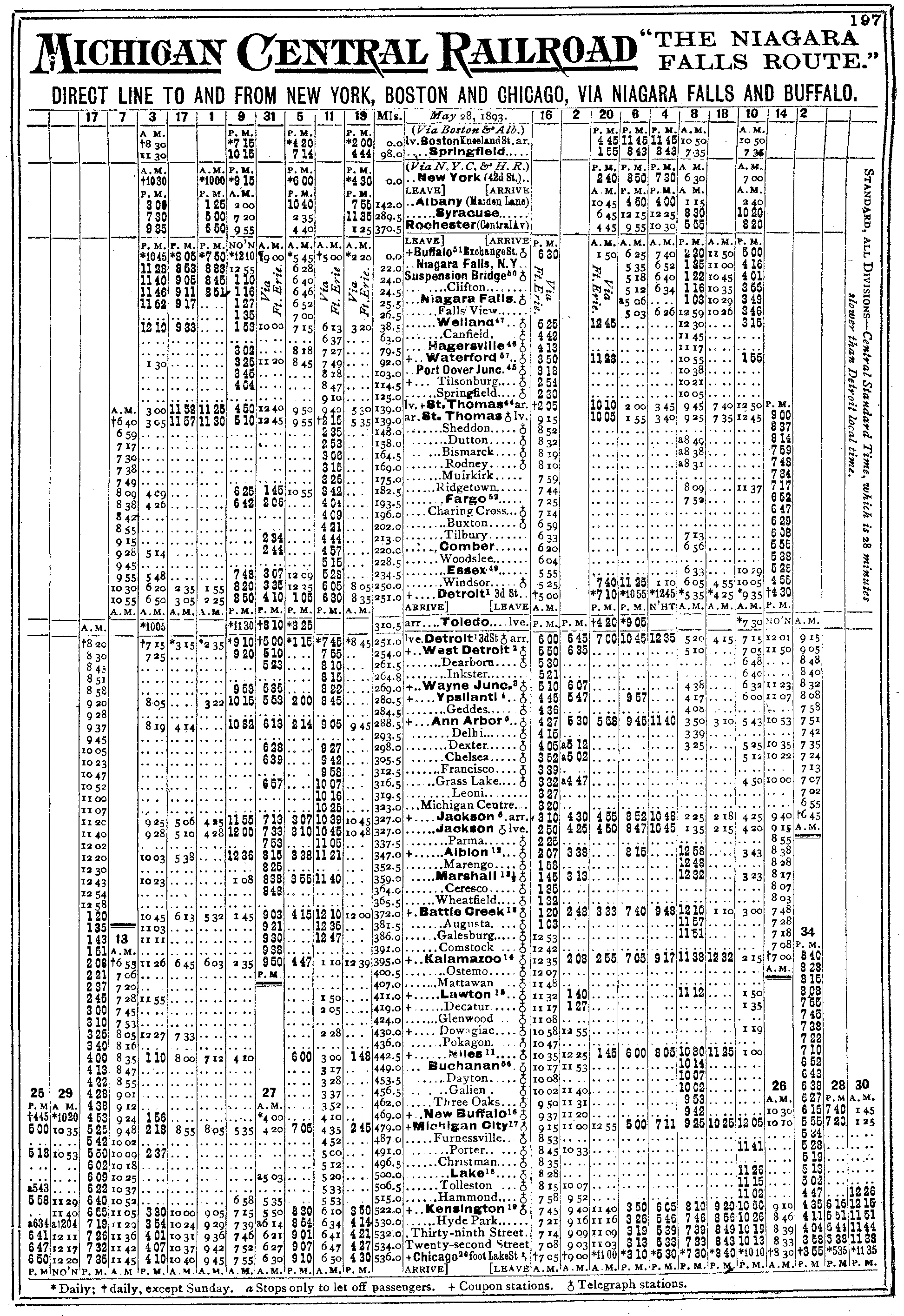 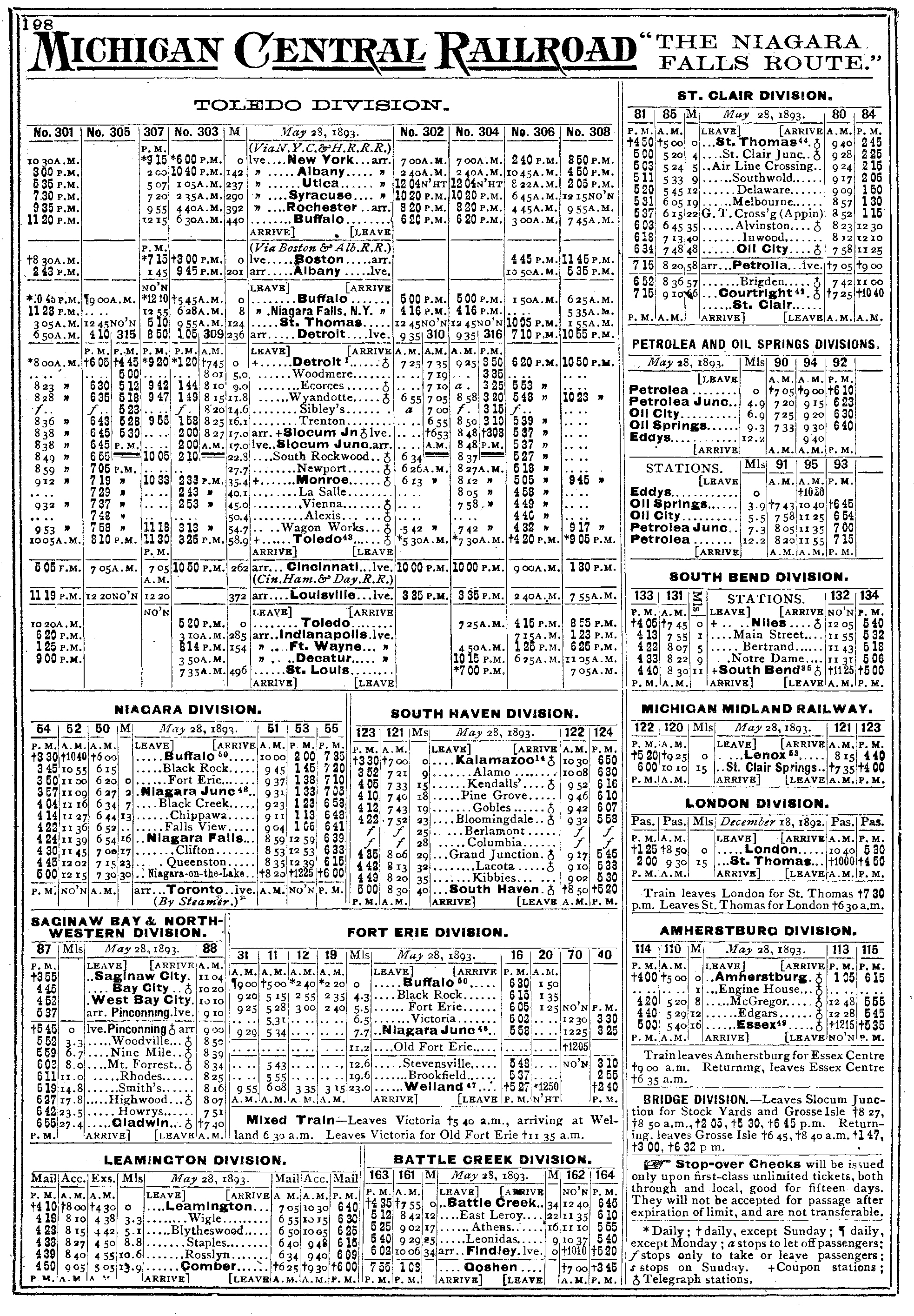 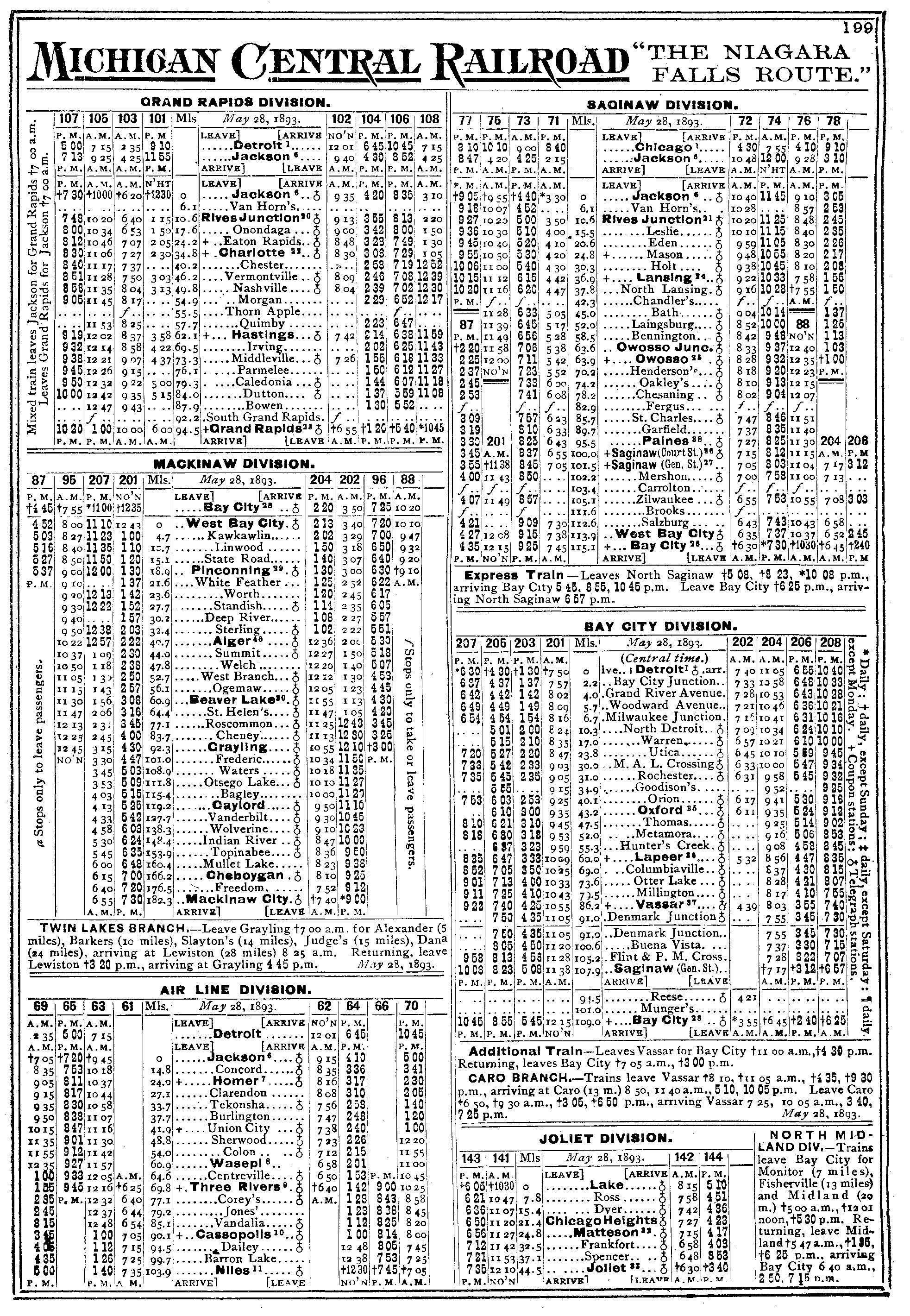 Over the next 20 years the Michigan Central continued to grow and expand across its home state.  On October 10, 1881 it launched car ferry service across the Straits of Mackinac via the new Mackinac Transportation Company in conjunction with the Detroit, Mackinac & Marquette (Duluth, South Shore & Atlantic Railway/Soo Line) and Grand Rapids & Indiana (Pennsylvania Railroad).

As Cornelius Vanderbilt continued to acquire railroads to establish a true eastern trunk line, he eyed the Michigan Central.  However, as Mike Schafer and Brian Solomon note in their book, "New York Central Railroad," the acquisition of this property proved more difficult than expected.

To reach the Michigan Central via a direct route through southern Ontario, Vanderbilt first sought the Great Western Railway.  However, this property eventually came under Canadian National control.  Next, the Commodore went after the nearby Canadian Southern.

Vanderbilt's last major acquisition before his death occurred on January 1, 1876 when he added the Canada Southern Railway through stock control.

Better known by its initials, "CASO," it offered a direct route between Buffalo and Detroit and remained an integral part of the New York Central throughout the 20th century.

During this time the Commodore had also been attempting to secure the Michigan Central with little success.  To do so ultimately required a painstaking and expensive process of slowly acquiring stock.

Also known as the Michigan Central Railway Tunnels, these twin bores began construction in October, 1906 and officially opened on July 26, 1910.

They were located beneath the Detroit River and provided a direct link between the Canadian Southern Railway (CASO) at Windsor, Ontario and Michigan Central tracks in downtown Detroit.

The small center-cab electrics, dubbed Class R-1, R-1a, and R-1b, were built between 1910-1925 and sub-lettered for the Michigan Central.  This system remained in use until 1956 when it was dropped in favor of diesels.

In 1985, Conrail sold the tunnel to the Canadian National and Canadian Pacific with the latter acquiring full ownership in December, 2020. 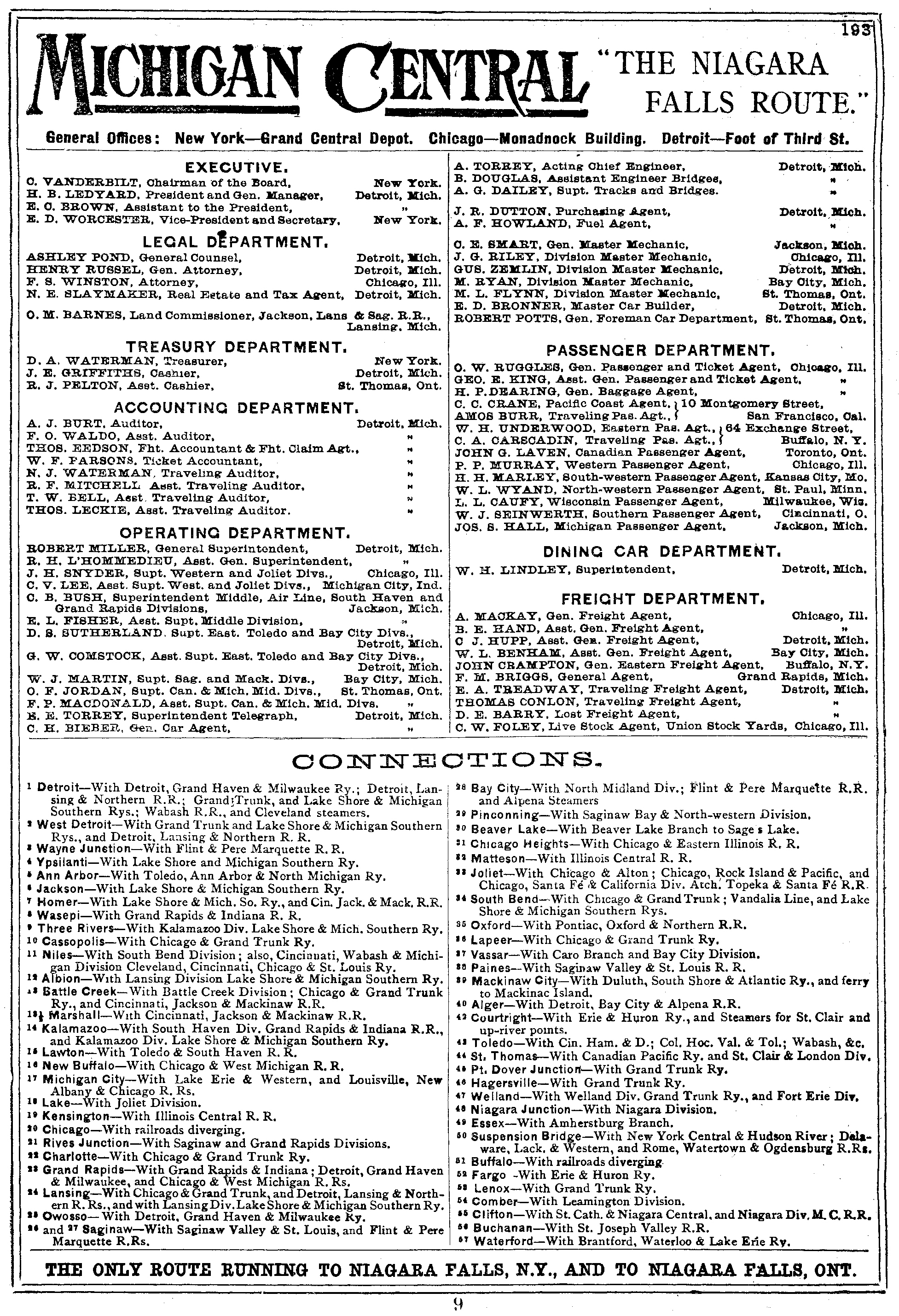 The process was not completed until 1878, a year after he had died.  Following the Commodore's death, the New York Central continued to expand reaching Boston; Pittsburgh (through the Pittsburgh & Lake Erie); Wheeling (West Virginia); the coalfields of southern West Virginia (via the Toledo & Ohio Central); Columbus; Cincinnati; Cleveland; St. Louis over the Big Four Route (Cincinnati, Cleveland, Chicago & St. Louis Railway); and even Montreal, Quebec.

By the 1890s the Michigan Central was a formidable system, covering roughly 1,700 miles.  Its main line linked Buffalo with Chicago via Detroit with connections to Toledo, Mackinaw City, South Haven, Grand Rapids, and Lansing.

Its superbly engineered main line, particularly the CASO segment, allowed trains to cruise at speeds of 60 mph into Detroit.  This corridor grew in importance during the NYC era and was eventually double-tracked.

One of the great engineering landmarks for its time was the Niagara Falls Suspension Bridge.  It was 825 feet in length and just over 2 miles downstream from Niagara Falls, where it connected Niagara Falls, Ontario to Niagara Falls, New York. It remained in use from 1855-1897.

The bridge was a popular tourist destination and even Michigan Central's fastest, and most important passenger trains made sure to stop at this location to allow guests to enjoy the magnificent views.

By the 20th century the NYC system and its subsidiaries were vast.  To streamline the organization, all of the properties except for the Boston & Albany, Michigan Central, and "Big Four" were merged on December 22, 1914 into the second New York Central Railroad.

By 1916, the NYC controlled 94% of Michigan Central's capital stock.  Interestingly, in an odd twist the company (and those previously mentioned) remained a subsidiary for decades.

The reasoning had to do with the bonds of the Lake Shore & Michigan Southern and how the terms of those certificates had to be met.  Some bondholders were unscrupulous in their efforts to earn maximum return.

Following the frustration of this effort, NYC management opted against dissolving the remaining companies.  As a result, they became long term leases and their markings could still be found on equipment into the diesel era.

Incredibly, the Michigan Central name survived beyond Penn Central.  With PC's bankruptcy on June 21, 1970 and subsequent formation of the Consolidated Rail Corporation on April 1, 1976, the former's rail assets were handed over to the latter.

Michigan Central Station opened on January 4, 1914 and at the time was the tallest railroad station in the world.  It featured the primary station/terminal, a thirteen-story office complex, two mezzanine levels, and stood at a height of 230 feet.

The station, completed in the Beaux-Arts style, was built by architects Warren & Wetmore of New York and Reed & Stem of St. Paul, Minnesota. The two firms had also worked on NYC's famous Grand Central Terminal in New York City.

During peak operations in World War I the station saw more than 200 trains coming and going every day; during World War II there were still more than 4,000 passengers passing through its halls daily with 3,000 office workers in the floors above.

The station's decline began immediately after the second World War.  As early as 1956, New York Central attempted to sell the facility for $5 million but there were no takers.

By 1967, NYC had largely ended operations at the station.  Amtrak acquired the building following its May, 1971 launch and reopened the waiting room in 1975. It spent some money on renovations in 1978 ($1.25 million).  Finally, Amtrak shuttered operations in the late 1980s with the final train leaving the facility on January 6, 1988.

Over the next 30 years Michigan Central Station fell into great disrepair and appeared to be destined for the wrecking ball.  Then, in a surprising move Ford Motor Company announced it was acquiring the building in March, 2018 with plans to completely renovate the structure back to its original appearance.

The restoration is still-ongoing with the company stating it plans to use the building as its autonomous vehicle development and deployment facility and it will part of its larger Corktown campus. 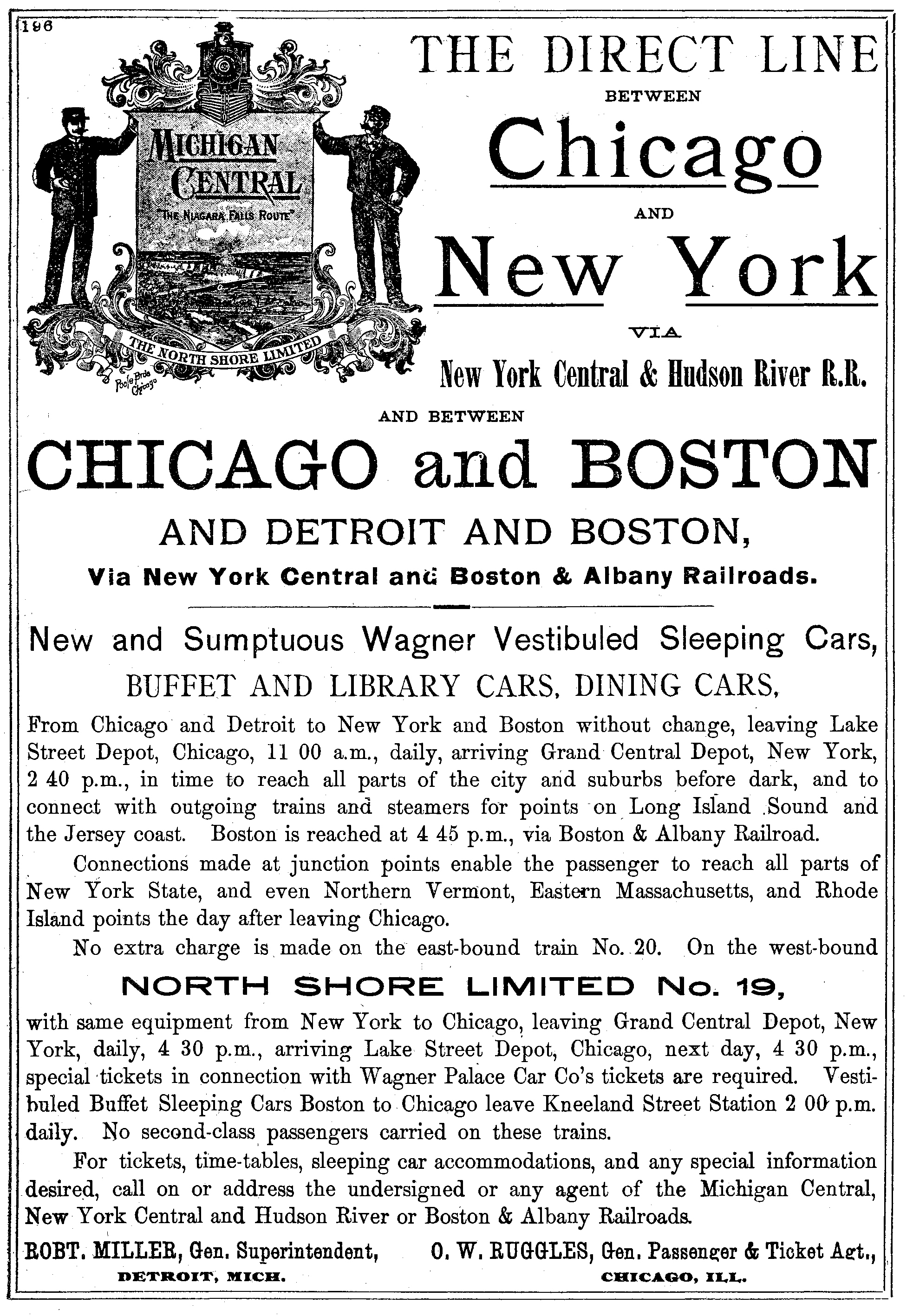 However, Penn Central continued on in a non-railroad role, maintaining the various non-rail entities it controlled.  The company was renamed as the Penn Central Corporation in 1978.

By that time Penn Central had long since wrapped up its involvement in railroad affairs, having spent years after the Conrail takeover selling off remaining rail assets (such as stations and property).

It then focused on the insurance market and changed its name to American Premier Underwriters in March, 1994. The company was subsequently folded into the American Financial Group. 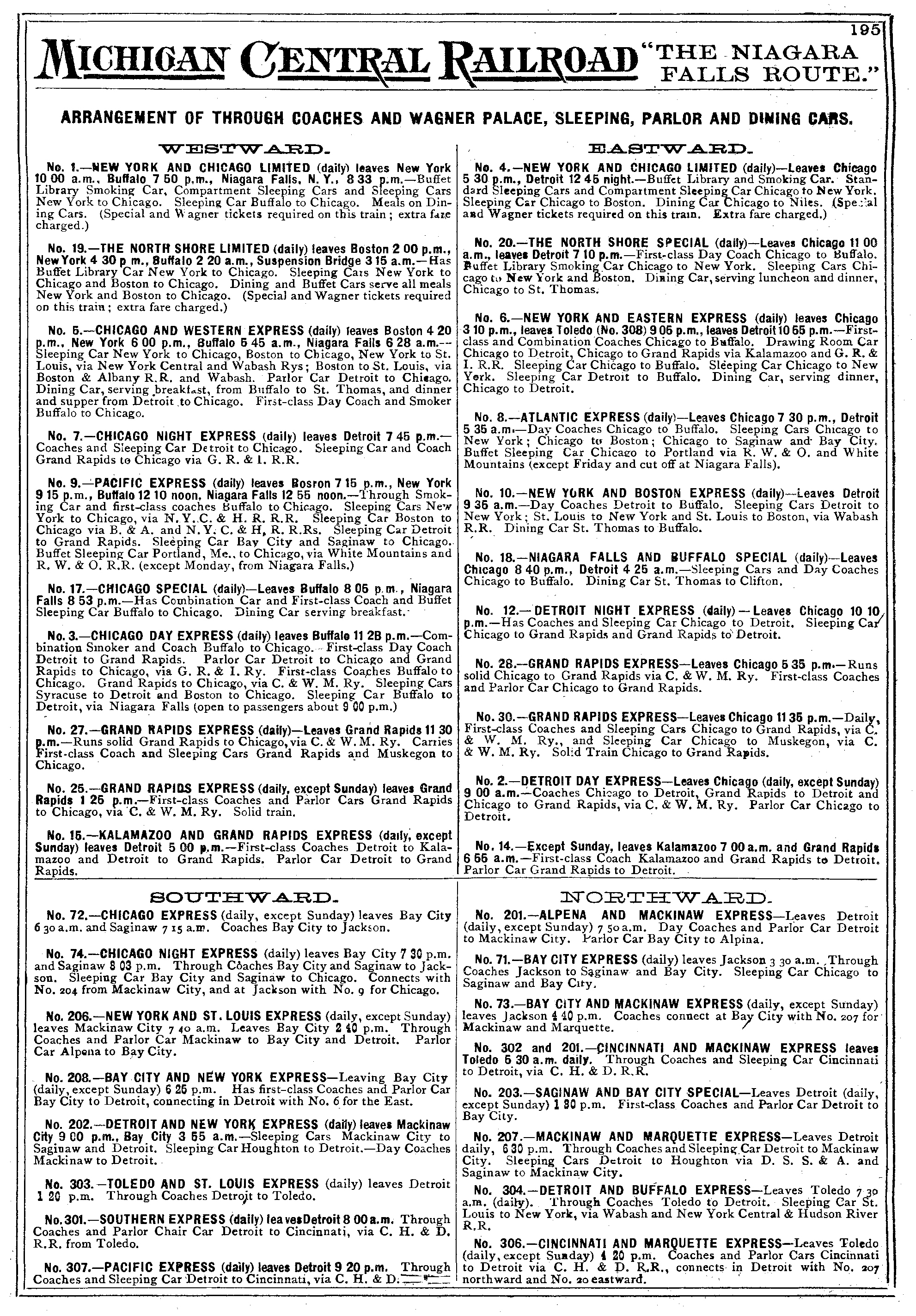 The Michigan Central did not fair well after the Conrail takeover.  The new owner saw little need for the Canadian Southern corridor and promptly abandoned it as a through route.  In addition, most of the MC's secondary corridors have also been abandoned.

Today, there are three notable segments still in use: the Lake State Railway operates the former line to Mackinaw City between Bay City-Gaylord; Amtrak owns the former Chicago main line between Porter, Indiana-Kalamazoo, Michigan while the state of Michigan owns the remainder eastward to Dearborn; finally the Detroit River Tunnels linking Detroit-Windsor remain in use under Canadian Pacific.