Maryland is literally where it all began, at least in regards to common-carrier systems. The esteemed Baltimore & Ohio Railroad is an institution in the state and well remembered, particularly by the City of Baltimore, where it all started.

However, the B&O was not the only classic to serve Maryland as a few others, notably the Pennsylvania Railroad and Western Maryland.

The state has seen roughly half its rail infrastructure abandoned, largely secondary and branch lines.  One noteworthy abandonment was the Maryland & Pennsylvania Railroad, a fabled short line that connected Baltimore with York, Pennsylvania.

At 80 miles its circuitous route was 27% longer than the nearby PRR's.  Nevertheless the little "Ma & Pa" earned quite a follow from train enthusiasts as mixed freight trains wound their way through the woods and open farmland.

Most of the original was abandoned in the late 1950's while components survived until 1999.

In any event, today, Maryland's railroad network is operated mostly by successors CSX Transportation and Norfolk Southern Railway and a handful of smaller systems.

Additionally, the state is also home to Amtrak's high-speed and very busy, Northeast Corridor (NEC) (originally the Pennsylvania Railroad's main line up and down the Northeast), as well as commuter agencies MARC, Virginia Railway Express, and the Washington Metro (Washington, D.C.). 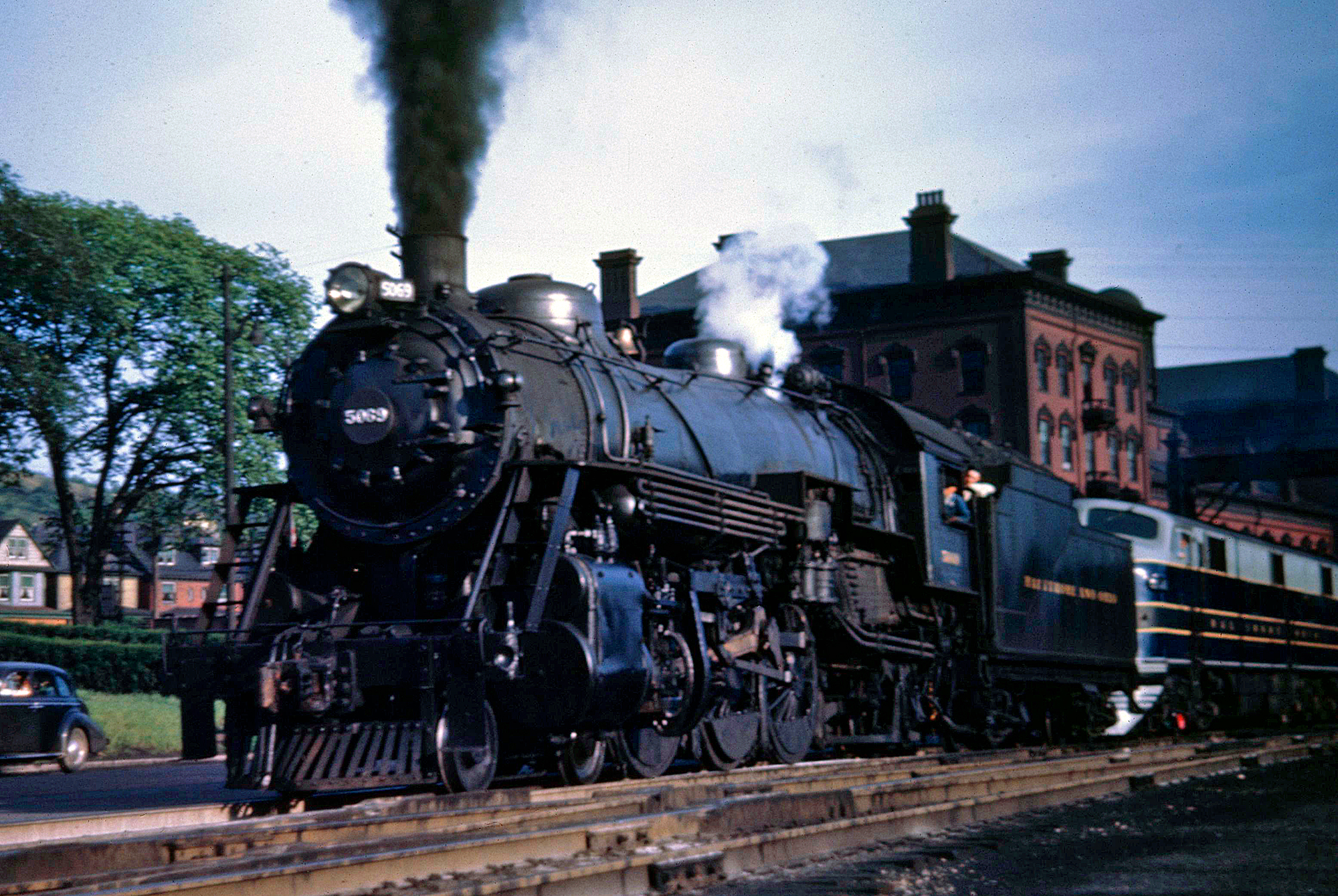 Maryland railroads date back to April 24th, 1827 upon which day the Baltimore & Ohio Railroad was officially chartered by Baltimore businessmen out of a great need to compete with the creation of the Erie Canal.

Considered revolutionary technology at the time, the canal connected New York City with the Port of Albany at Buffalo.  Philadelphia, another important eastern port, planed to build a similar transportation system to the City of Pittsburgh on the western side of Pennsylvania.

The creation of the B&O dated as far back as 1826 when Philip Thomas and George Brown traveled to England to gain ideas of how to effectively construct and operate railroads practically and profitably.

By February 1827 the Maryland state legislature began mulling the idea of creating a railroad, unofficially creating the B&O that month to establish a rail route reaching the Ohio River.

The railroad's official groundbreaking occurred on the Fourth of July, 1828 a year later and the initial line between Baltimore and nearby Ellicott's Mills (now Ellicott City) began operations on May 24th, 1830.

Maryland has two distinctly different regions, the western mountains and coastal plains to the east. Interestingly, most of the state's 700+ miles of abandoned railroads are to the east.

While the Baltimore & Ohio is famously remembered as its first railroad (and this country's first common-carrier), most B&O routes remain intact and in use today.

The largest single abandonment is a significant collection of the Pennsylvania Railroad's old Delmarva Lines on the Eastern Shore.

This secondary corridor provided the PRR with a north-south route to Norfolk/Chesapeake, Virginia.  In addition, they contained numerous branch lines serving the region's fertile agricultural region.

Most of these lines outlived their usefulness by decades and witnessed little service during the Penn Central era but were unable to be let go.

As a result, most survived until the start of, or through, the early Conrail era.  What remains today is operated by short lines.

Another notable is the fabled Maryland & Pennsylvania Railroad, the legendary "Ma & Pa."  This bucolic short line operated a crooked route from Baltimore to York, Pennsylvania.

Part of the line was abandoned in the 1950s while the rest was removed over the next 30 years.  A notable through route since removed was the PRR's Baltimore-Harrisburg main line.

Built as the Northern Central Railroad and recognized for multiple historic events related to the U.S. presidency (transporting President Lincoln to Gettysburg where he delivered the Gettysburg Address and also hosted four funeral trains of U.S. presidents [Harrison: 1841, Taylor:1850 , Lincoln: 1865, and Harding: 1923]) it succumbed under Penn Central when Hurricane Agnes caused numerous washouts in 1972.

The railroad did not have the money to necessitate repairs and subsequently embargoed the line.  For many years this route was double-tracked.  Today, short segments remain for excursions.

You may also want to research and/or explore the state's many abandoned interurbans; most notable among these was the Washington, Baltimore & Annapolis which provided high-speed rapid transit service to all three cities.

Alas, despite being well-maintained and well-managed it succumbed to the automobile and shutdown on August 20, 1935.

By 1852 the B&O had achieved its goal of reaching then Wheeling, Virginia along the banks of the Ohio River.

Throughout the rest of the 19th century and into the 20th the railroad continued to grow and expand through purchase and takeover of smaller lines as well as new construction.

At its peak the B&O reached such cities as St. Louis, Chicago, Buffalo, Philadelphia, and New York. 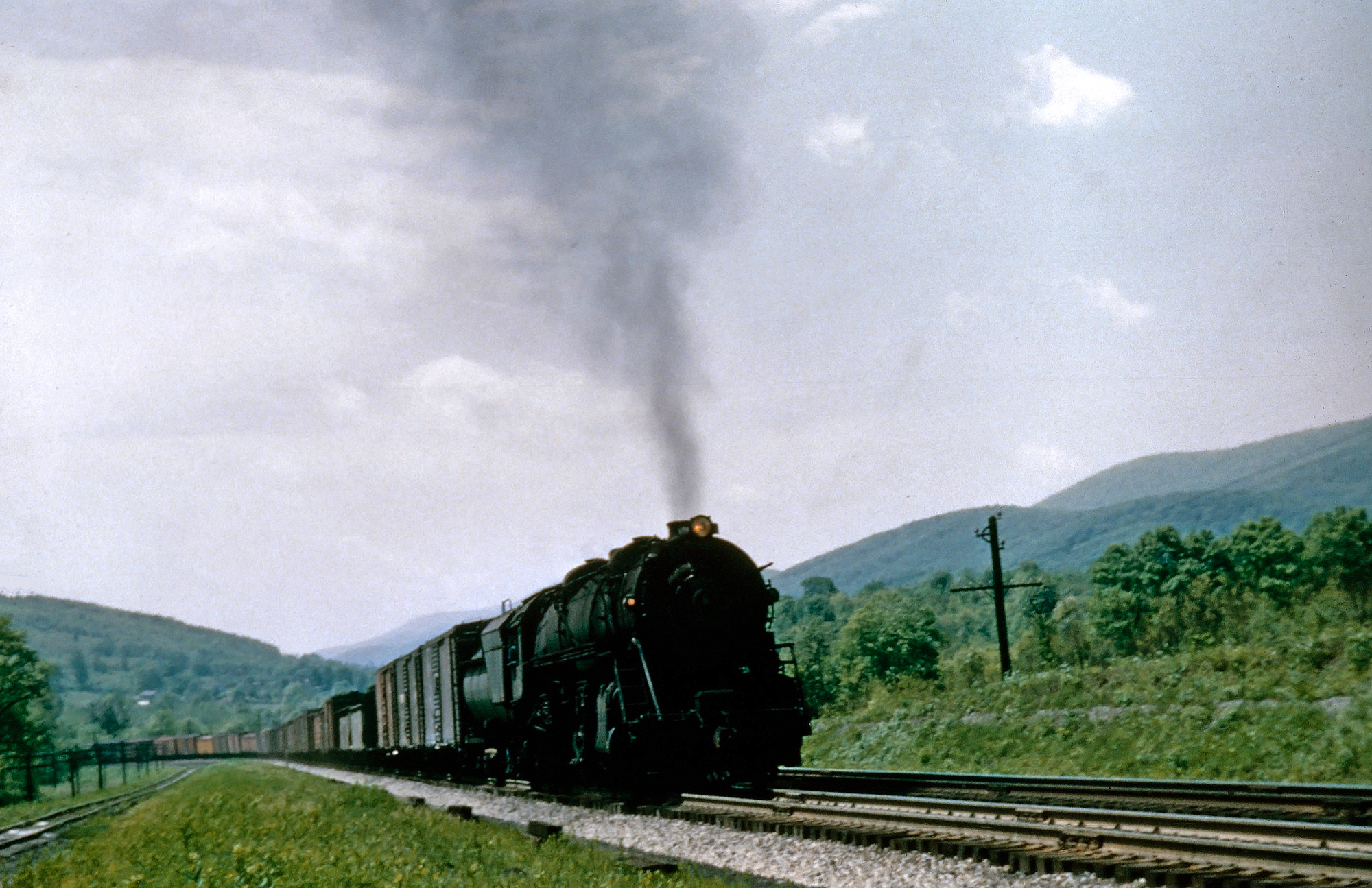 A Baltimore & Ohio 4-8-2 (T-3) has just left the famous Narrows west of Cumberland, Maryland as it leads a freight westbound toward Sand Patch, circa 1955. At left can be seen the former Cumberland & Pennsylvania's (Western Maryland) State Line Branch. American-Rails.com collection.

Today, much of the B&O's trackage, such as its original main line to Ellicott City, remains in place and in use by CSX. Along with CSX, Norfolk Southern also has a key route that connects to Hagerstown and funnels traffic north and south.


Interestingly, with all of the rich history associated with Maryland the state has never had a significant amount of rail mileage.

Today it is home to just under 800 miles and at its peak featured less than 1,500 miles. Since the 1920s the state has lost about 46% of its rail infrastructure, which falls in about the middle of the pack as other states have seen similar declines since that time.

For a more detailed look at the state's railroad mileage over the years please have a look at the chart below. 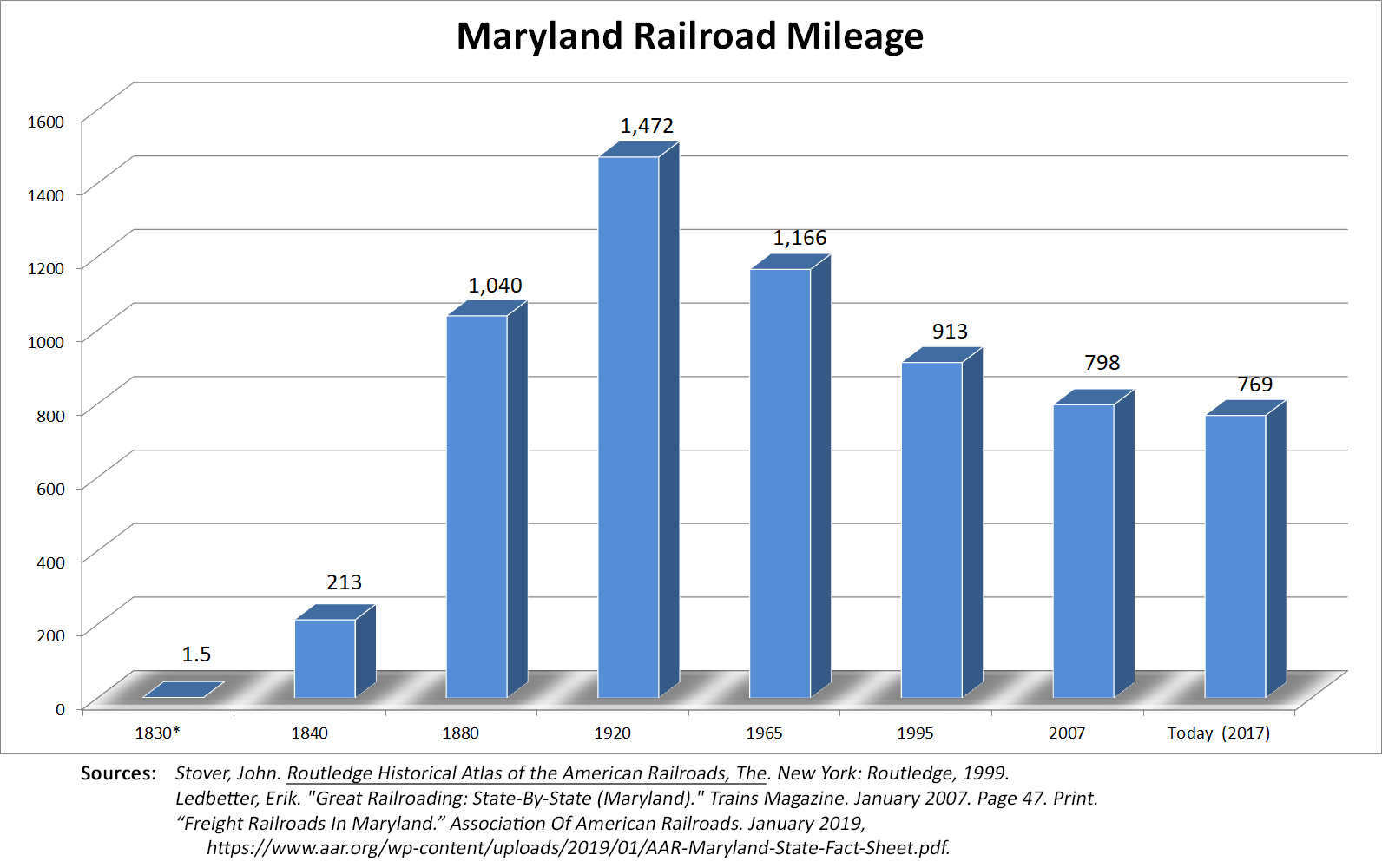 * Maryland's first railroad was, of course, the Baltimore & Ohio; chartered in 1827 it opened its initial 1.5 miles from a small station in Baltimore at Pratt Street in January, 1830.    Just a few months later it had opened 13 miles to nearby Ellicott Mills.  A pioneer in railroad development and technology, the B&O became a legendary if not highly profitable name in the industry.  It survived for 160 years until disappearing into CSX Transportation in 1987.

Maryland may no longer be home to the B&O's flagship, the Capitol Limited but Amtrak still operates the train to Chicago.

The carrier also operates its high-speed Acela trainsets as far south as Baltimore, and its Regional and Silver Service, New York to Florida trains also serve the city. 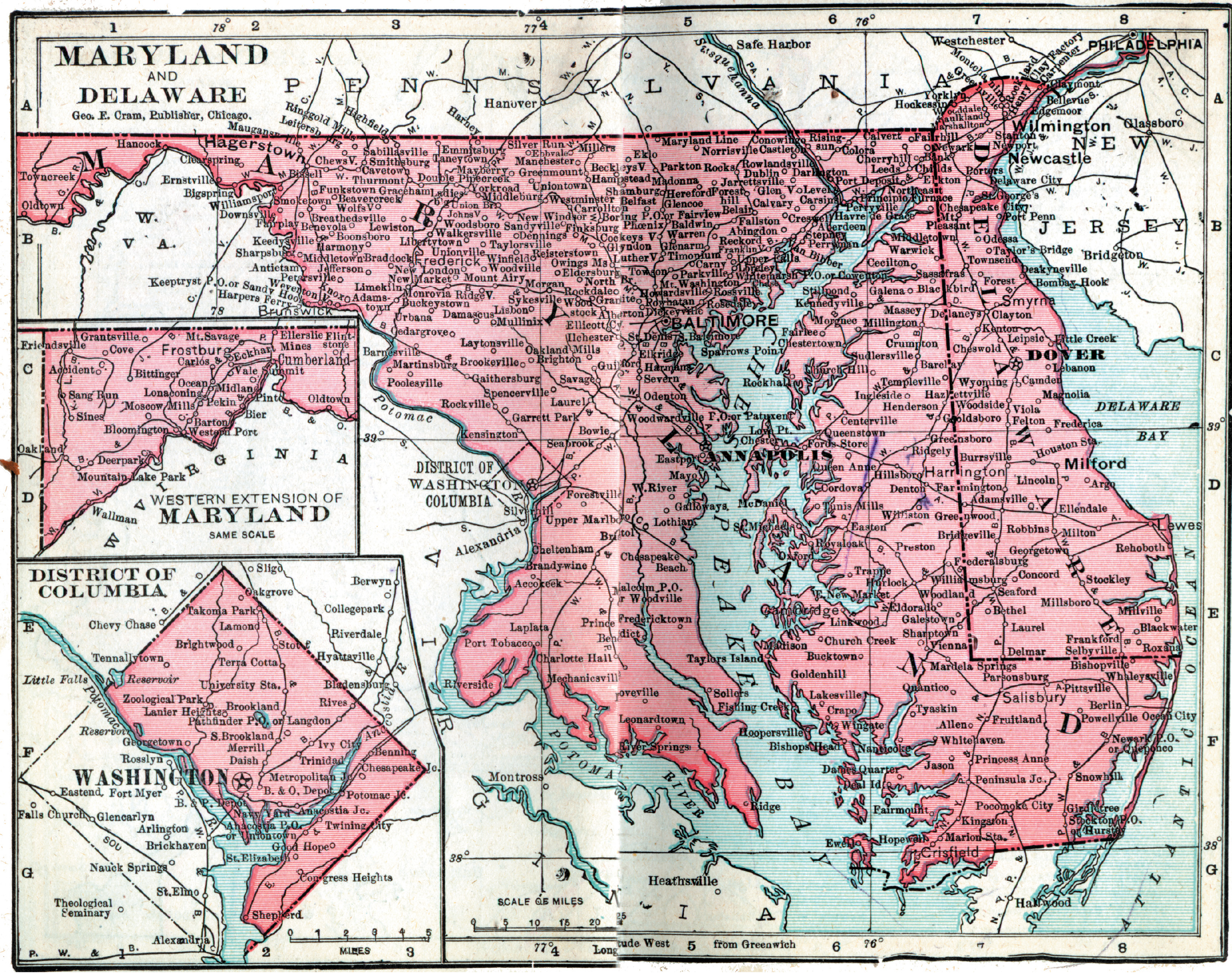 A Maryland railroad map, circa 1906, highlighting most of the state's rail lines in service at that time Author's collection.

Along with Amtrak the MARC commuter operation serves much of eastern Maryland and Washington D.C. with extensions as far west as the towns of Martinsburg and historic Harpers Ferry, West Virginia.

Aside from passenger and freight train operations Maryland also includes the world-renowned Baltimore & Ohio Railroad Museum, which, despite a catastrophic roof collapse to its historic roundhouse in downtown Baltimore, still sees hundreds of thousands of visitors annually and is a major tourist attraction to both the city and state.

Maryland is also home to the very popular Western Maryland Scenic Railroad based in Cumberland that operates ex-Western Maryland Railway trackage to Frostburg.   Other Maryland railroad museums and excursion trains include:


In all, Maryland railroads offer a unique blend of mountainous and coastal operations, local short lines, and steam-powered excursion trains.

A little mix of everything for the railfan, general lover of history, and/or vacationer looking for something a little different to see and experience.