Maine for the past 170+ years have been defined by two things, timber products and potatoes. Our most northern state is sometimes forgotten for its railroads.

However, not only are the lines which operated in Maine "classic" fallen flags today but they also played a very important role throughout the years moving the state's biggest sources of traffic, agriculture and timber.

A Brief History Of Maine Railroads

State Mileage Through The Years (Chart)

Photos (Throughout The Article)

The state was particularly famous for its potatoes, a crop that produced the Bangor & Aroostook (BAR) considerable revenue for decades.

For years, the Pine Tree State had no Class I railroads operating within its borders.  That changed in 2020; Canadian Pacific formally acquired the Central Maine & Quebec Railway on June 4, 2020 and CSX picked up Pan Am Railways in November, 2020.

Additionally, a few larger Class II, regionals and a handful of short lines also find a home in Maine and remain important transportation arteries for the state (so much so that Maine purchased a large section of former Bangor & Aroostook property in 2010 to save it from abandonment). 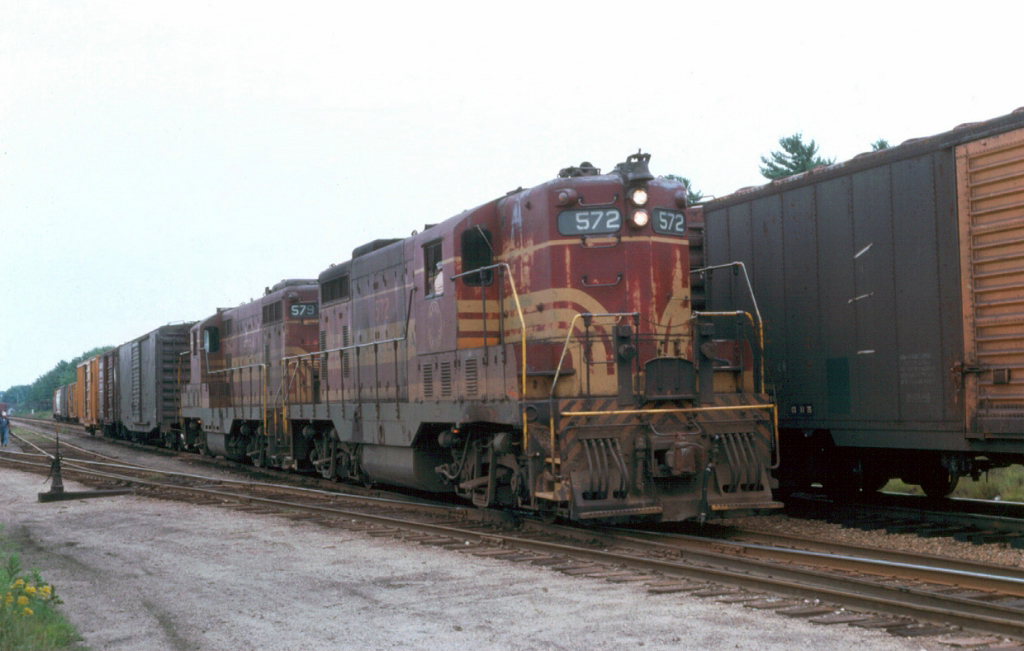 Maine Central GP7s #572 and #579 still wear their original gold and maroon liveries from the days of B&M control as the units put together a train in the Brunswick, Maine yard during early August of 1978. Randy Kotuby photo.

A Brief History Of Maine Railroads

Maine railroads date back to 1836 when the Bangor & Piscataquis Canal and Railroad opened between Bangor and Old Town, a distance of about 12 miles.

The railroad was constructed primarily to haul timber products and would go on to be joined with the Bangor and Katahdin Railroad in 1891 to form one of Maine's most remembered railroads, the Bangor & Aroostook Railroad (also referred to by its initials, the BAR).

While Maine is often remembered for railroads like the Maine Central, Boston & Maine, and Bangor & Aroostook the state was always known as "Realm Of The Two-Footers."

Lumberman in the region gained an affinity for the two-foot gauge railroad and used it liberally throughout the state.  There were a dozen two-foot, common-carrier railroads in Maine during peak operation, in addition to even more privately-operated systems.

According to George Hilton's book, "American Narrow Gauge Railroads," the state mileage of common-carrier narrow-gauge systems (including two-footers, 3' 6", and 3') was 426 miles; of this total, about 206 miles included only 2-foot systems.

Today, all of these systems are gone, save for a short section of the Wiscasset, Waterville & Farmington that has been rebuilt by the museum and group dedicated to its preservation.

It is a fascinating operation that is still rebuilding the railroad and worth the visit to see!

Nearly every other abandoned line in the state is former Maine Central or Bangor & Aroostook corridors.  In addition, sections of the Boston & Maine are removed in the state's southern periphery, such as the old Worcester, Nashua & Portland.

The WN&P was created in 1883, linking Worcester, Massachusetts with Portland, Maine.   It provided the B&M with a third main line to Portland and became superfluous, slowly abandoned after 1932.

Two other notables are former MEC lines; the Calais Branch, removed from Bangor to the Canadian border at New Brunswick and its former Mountain Division that provided a western outlet at St. Johnsbury, Vermont.

Most of the corridor is still down but has not witnessed a train in nearly 40 years.  One exception is the Conway Scenic Railroad which operates a successful excursion over a section in New Hampshire.

The Bangor & Aroostook wasn't the only classic line to tap Maine's rich resources. Others included the Boston & Maine (which reached Portland) and Maine Central (a major competitor of the BAR, it served much of southern Maine and stretched as far west as St. Johnsbury, Vermont).

Aside from these lines Maine also boasted numerous narrow-gauge logging lines, particularly during the 19th and early 20th centuries.

In any event, to learn more about Maine's three most notable railroads please visit the below links covering their history in more detail. 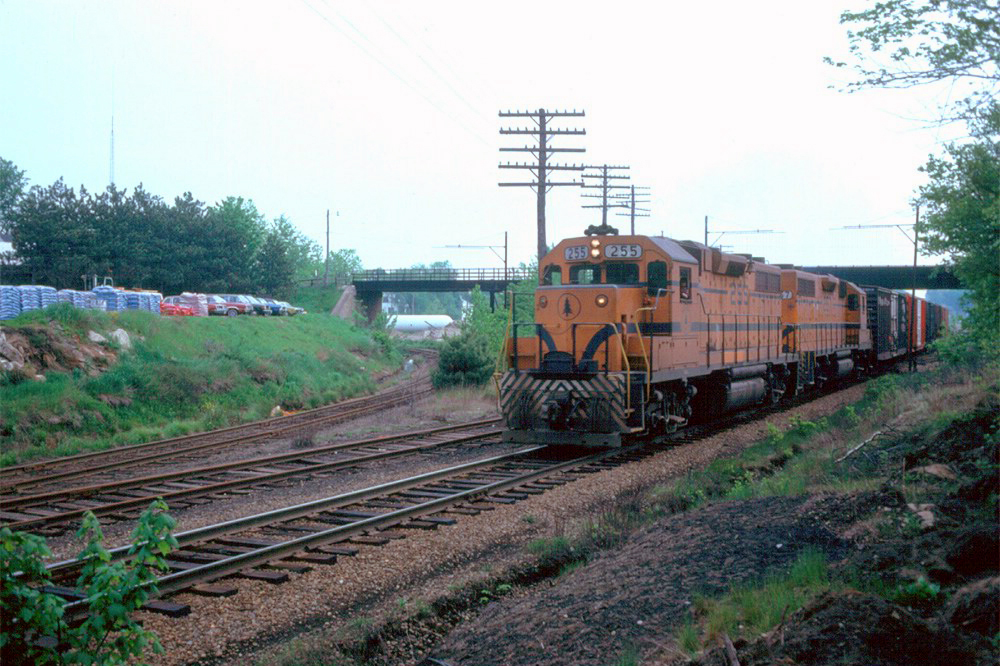 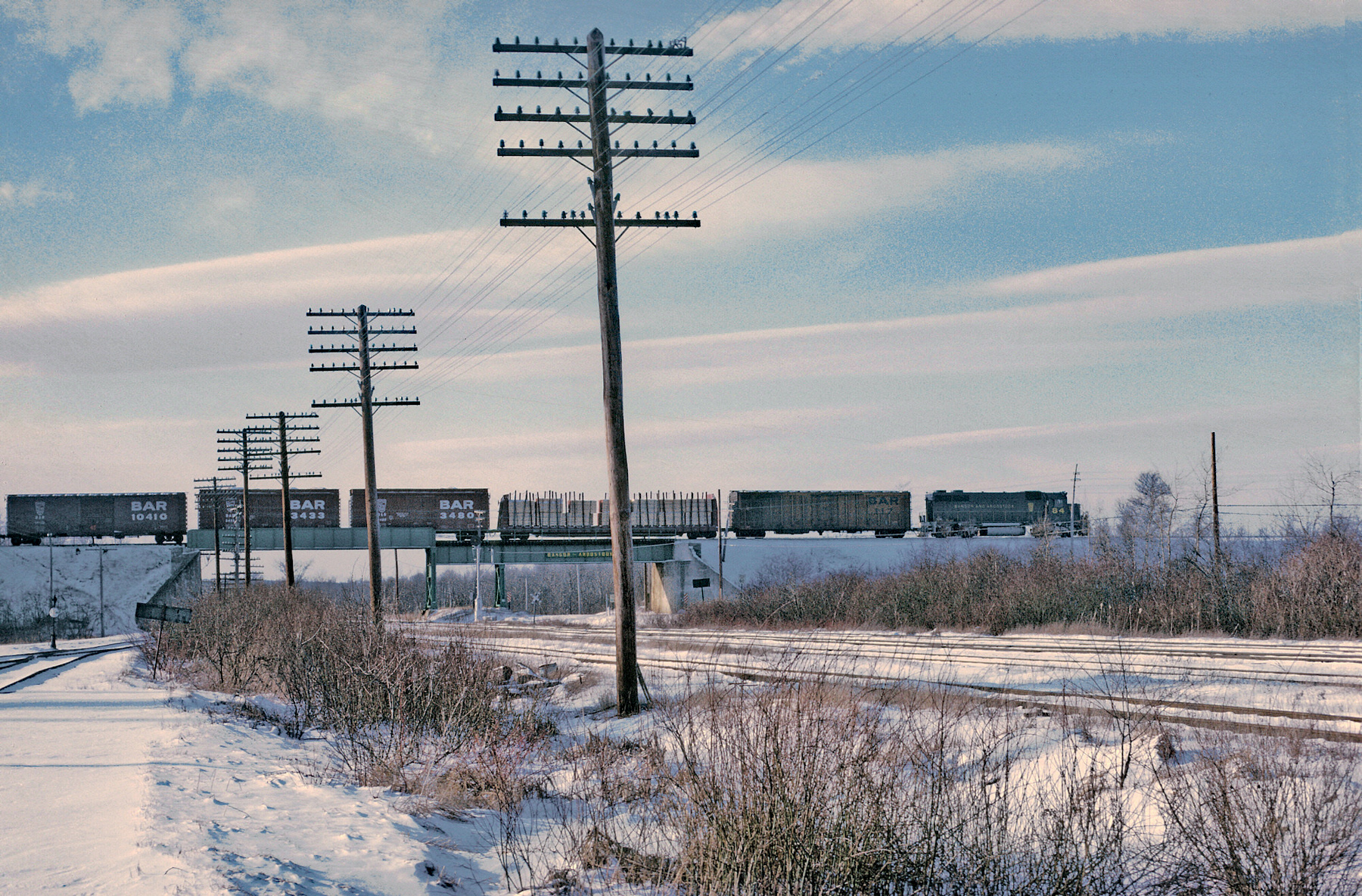 Today, Maine is the the realm of regional and short line railroads only. For many years the most notable of these included: 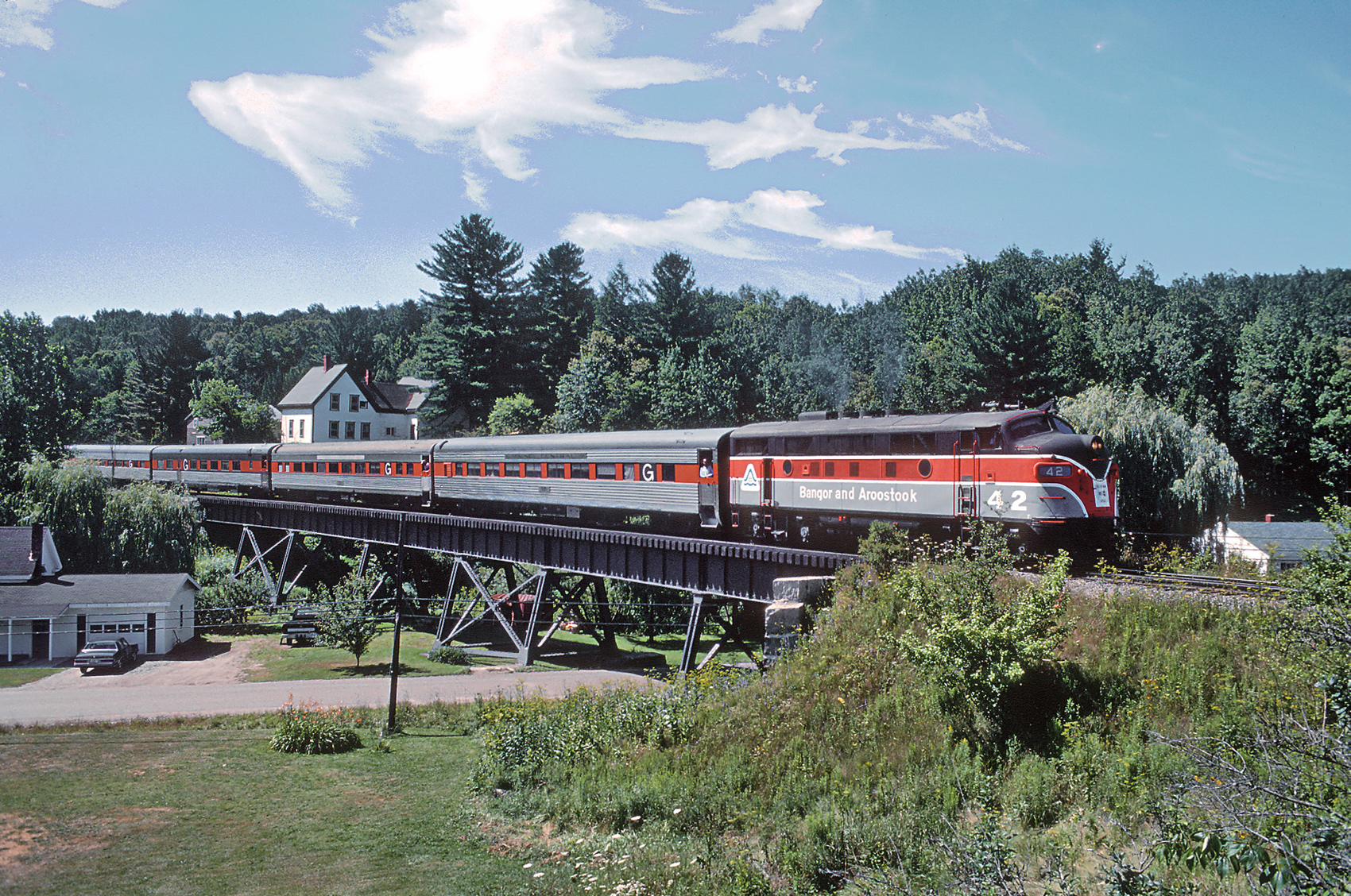 As mentioned previously, CSX picked up Pan Am in November, 2020 and Canadian Pacific acquired CM&Q in June, 2020.  The rest of the state is operated by other short lines including:

In all this totals over 1,000 miles of active railroad in Maine although at one time the state was home to over 2,000 miles of trackage. 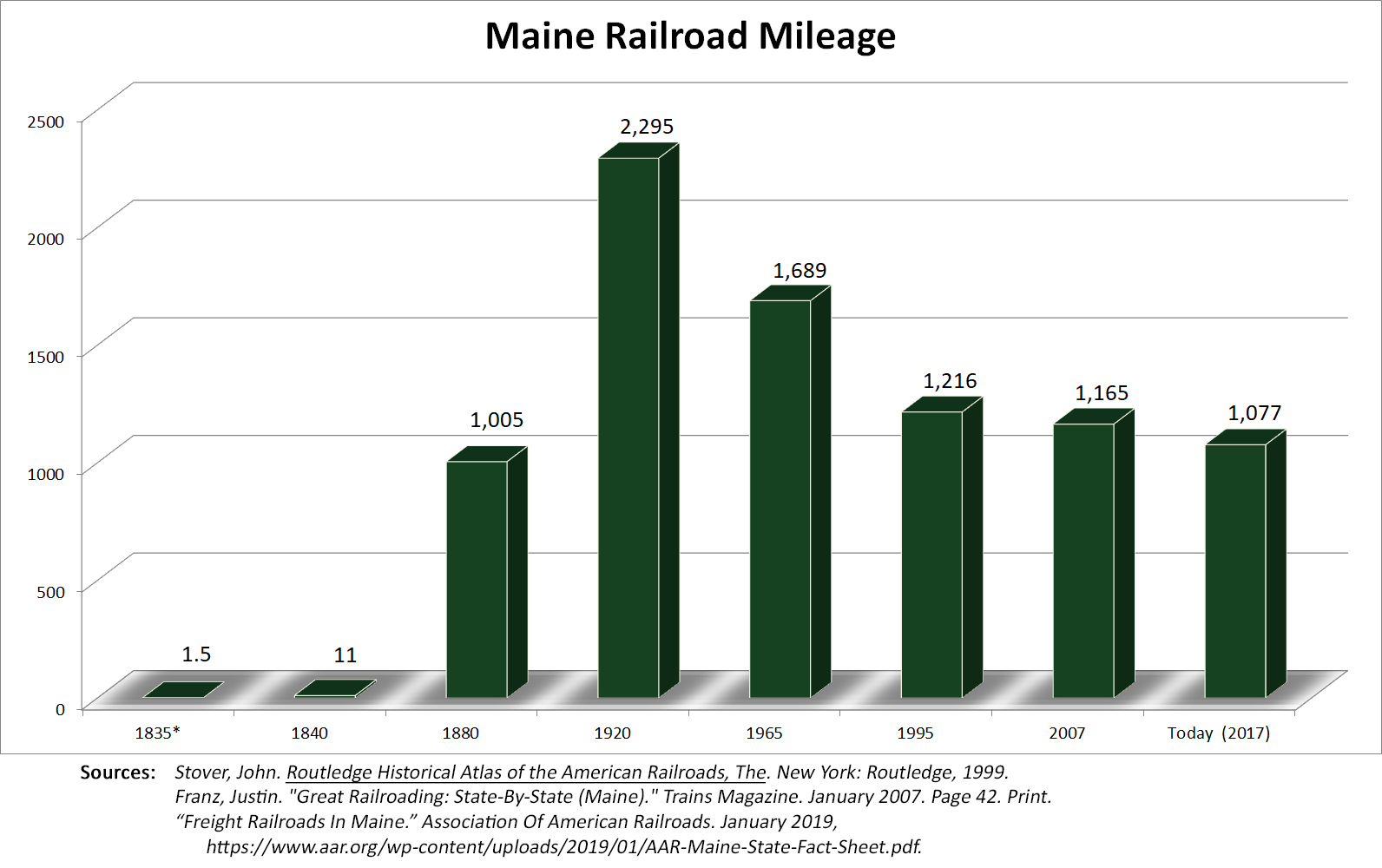 * The first railroad to serve Maine was the Calais Railroad, a local operation intended to move finished lumber from the Saint Croix River (near Milltown, New Brunswick) to Calais, Maine.  It was incorporated in 1832 and, according to "Poor's Manual of Railroads, Volume 12" (1879),  opened about 1.5 miles in 1835 as a horse powered operation.   In 1849 its name was changed as the Calais & Baring after reaching nearby Baring that year.  The first steam locomotive arrived in 1852 and eventually became a part of the Maine Central's network.

Overall, the state has lost about 50% of its total mileage since the peak of rail operations across the country in the 1920s. This decline is about average as many states have witnessed similar losses to their rail infrastructure. 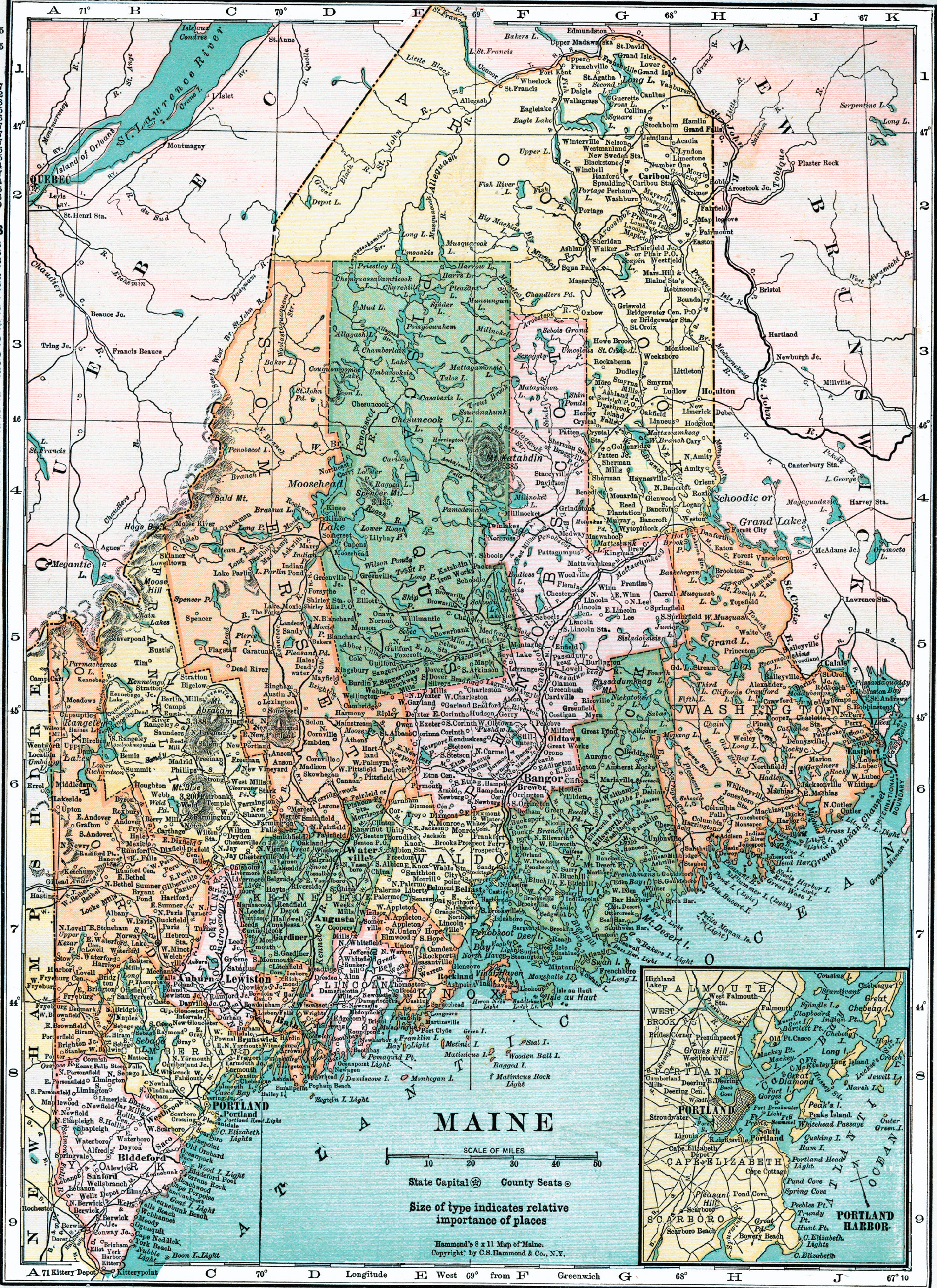 A Maine railroad map from 1920 featuring the state's peak infrastructure prior to later abandonments. A keen eye will note some of the state's famous "2 footers" like the Wiscasset, Waterville & Farmington Railway. Author's collection.

Today, passenger trains are operated by Amtrak and includes only the Downeaster although this train continues to gain support and ridership and is becoming increasingly popular. Currently the train serves three stops in Maine; Portland, Saco, and Wells.

Historically, Maine was never known for famous trains passing through its countryside. However, the Maine Central did have the Flying Yankee and the Boston & Maine's State of Maine, which were more regional in nature. 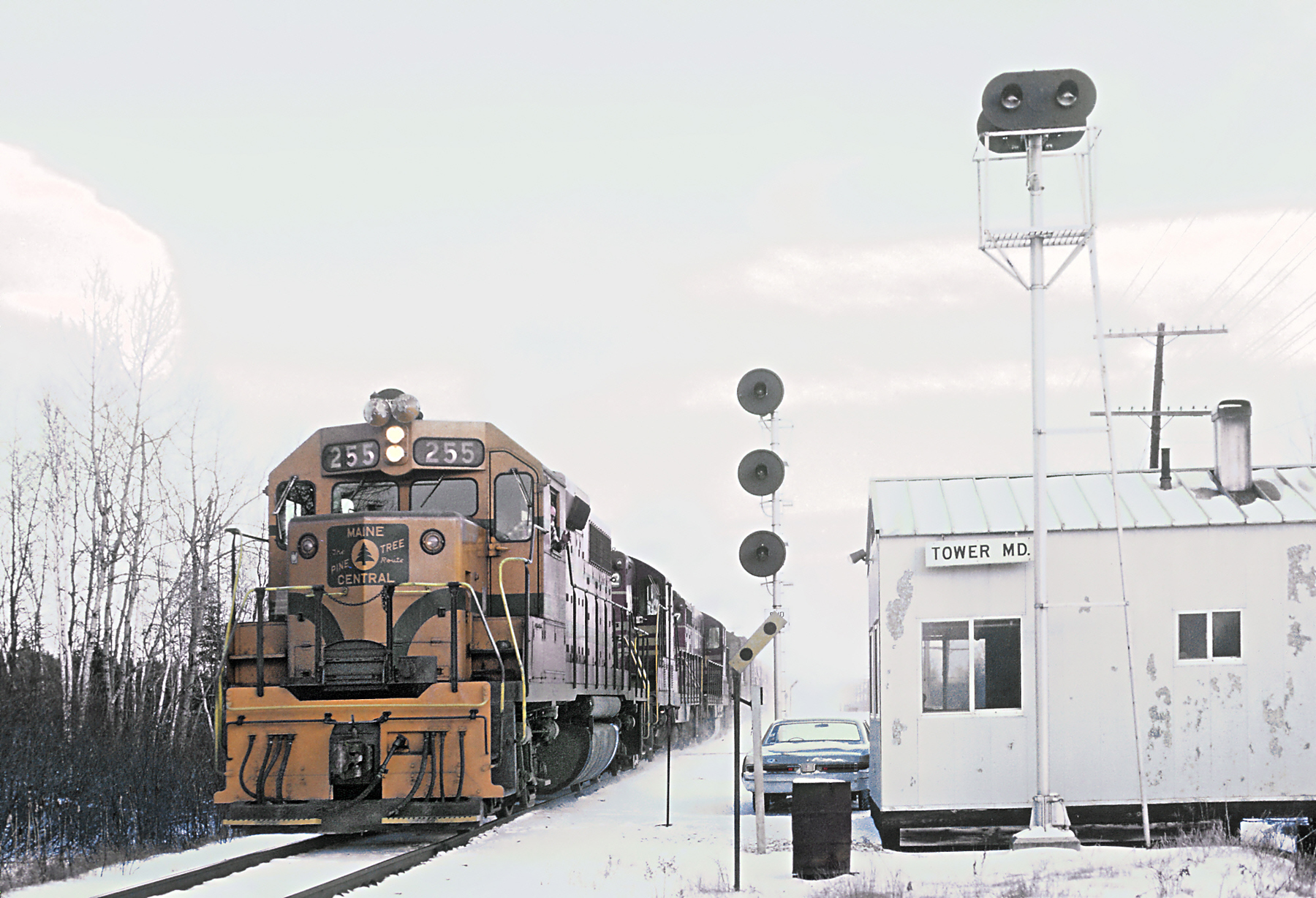 Passenger and freight trains aside Maine also offers several railroad museums and excursion trains like the popular Maine Narrow Gauge Railroad Company, which currently operates one live steamer and plans to restore another to operation.

All in all, Maine railroads offer a unique experience with rugged, mountainous operations in interior northern areas of the state and coastal operations to the south. So, if you are planning a visit to the Pine Tree State to see its railroads you certainly shouldn't be disappointed!