Michigan has been known for a number of things over its 170+ year history with railroads, from iron ore and timber products to automotive parts and merchandise.

For decades,  and until the 1970s, the state also witnessed significant carfloat operations due to its location along the lakes (notably at Ludington).

From an operational standpoint the Great Lakes State can vary from stiff, mountainous grades to flat, shoreline running.

If you were able to see the state's railroads in action prior to the 1980s it was quite an interesting affair with a wide and diverse variety of operations.

For many, the through lines running along the state's southern periphery are the most well-known, on their way to either Chicago, Detroit, or via southern Ontario.

In any event, the state is also home to the inventor of the historic Shay locomotive, Ephraim Shay, which built his first prototype in 1877. 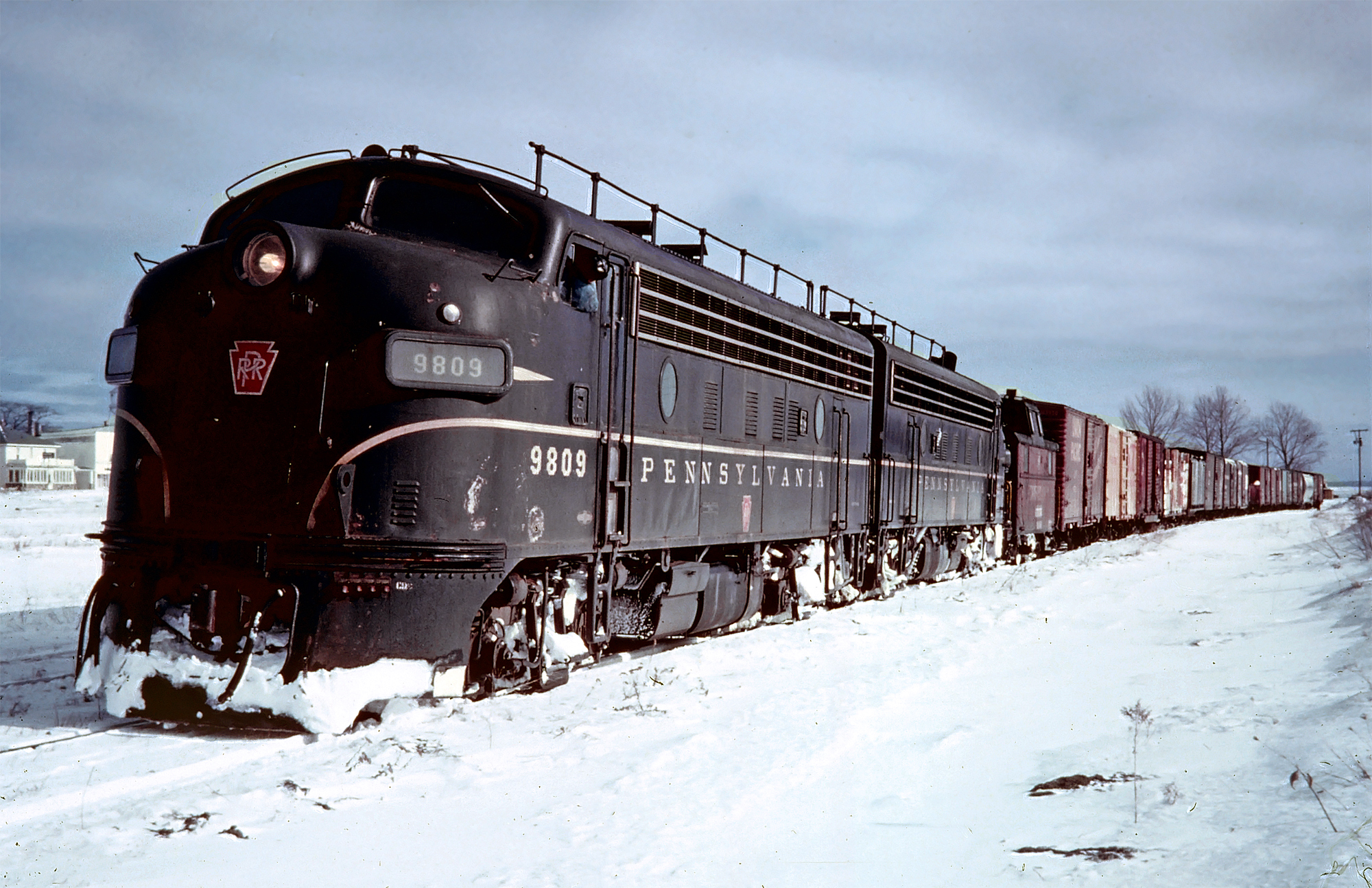 A pair of handsome Pennsylvania F7's, led by #9808, appear to be carrying out switching chores on the former Grand Rapids & Indiana at Mackinaw City, Michigan in February, 1964. Today, the right-of-way is a trail. P.D. Luster, Jr. photo. American-Rails.com collection.

Michigan railroads date back to 1836 when the little Erie & Kalamazoo Railroad finished its line connecting Adrian, Michigan and Port Lawrence, Ohio (what is today Toledo), a distance of nearly 40 miles (the line officially opened on November 2nd).

The history of the railroad dated as far back as 1832 although it was not officially chartered until April 22, 1833. While the E&K began as a horse-powered operation it switched to steam power by 1837, a year after begin services.

The railroad eventually became part of the large Lake Shore & Michigan Southern Railway, a massive system for its time, formed through smaller lines like the E&K in 1869. 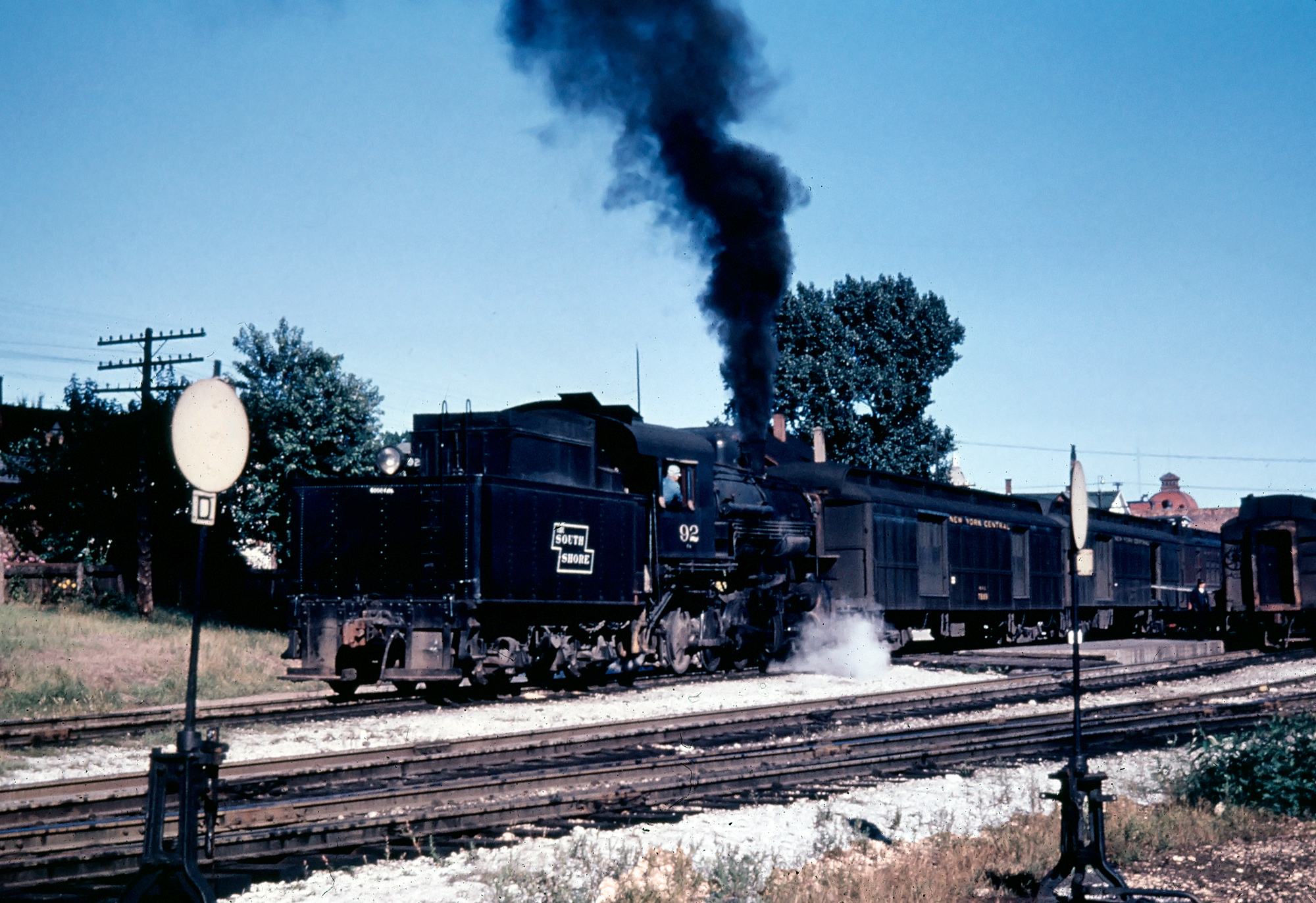 Duluth, South Shore & Atlantic 2-8-0 #92 carries out switching in front of the station at Marquette, Michigan in the summer of 1951. A.C. Kalmbach photo. American-Rails.com collection.

It would stretch from Buffalo, through northern Ohio, southern Michigan, northern Indiana and also reached Chicago.

In 1914 it became an important part of the New York Central System. In the succeeding years Michigan would be home to a number of well remembered railroads which included the Michigan Central, Grand Trunk Western and many others.

During the state's height it was a railfan's paradise; you could catch New York Central streamliners heading to and from Detroit, head west to Lake Michigan or north to Lake Superior and enjoy unique car ferry operations, or even head up to the U.P. and catch ore trains along the Milwaukee Road and Chicago & North Western.

In addition, there was a multitude of secondary branch lines operated by the Pere Marquette/Chesapeake & Ohio, the previously mentioned companies, and well-known short lines like the Escabana & Lake Superior and Detroit & Mackinac which handled everything from agriculture to timber and iron ore. 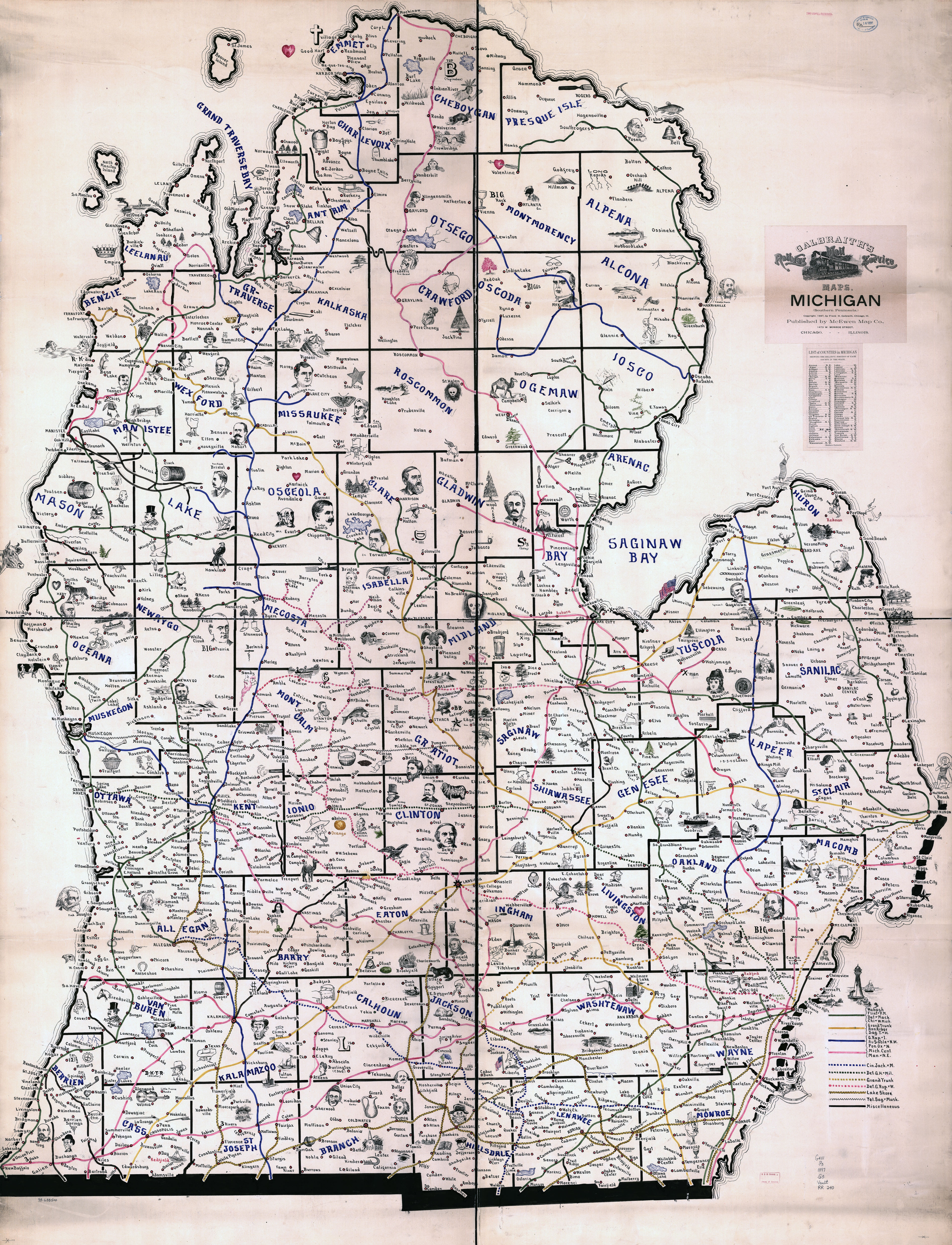 A Michigan railroad map from 1897 showing many of the state's lines in service by that time.

Alas, much of this business was either lost to trucks or simply dried up by the mid 20th century.  In addition, airlines pulled away much of the passenger business.

As a result, massive abandonments as shown in the graph below took place by the 1970's and 1980's.

The state map featured above shows most of the rail lines in service across Michigan by the turn of the 20th century.  Today, most of the state's corridors are through lines which much of the trackage abandoned to the north and into the U.P. 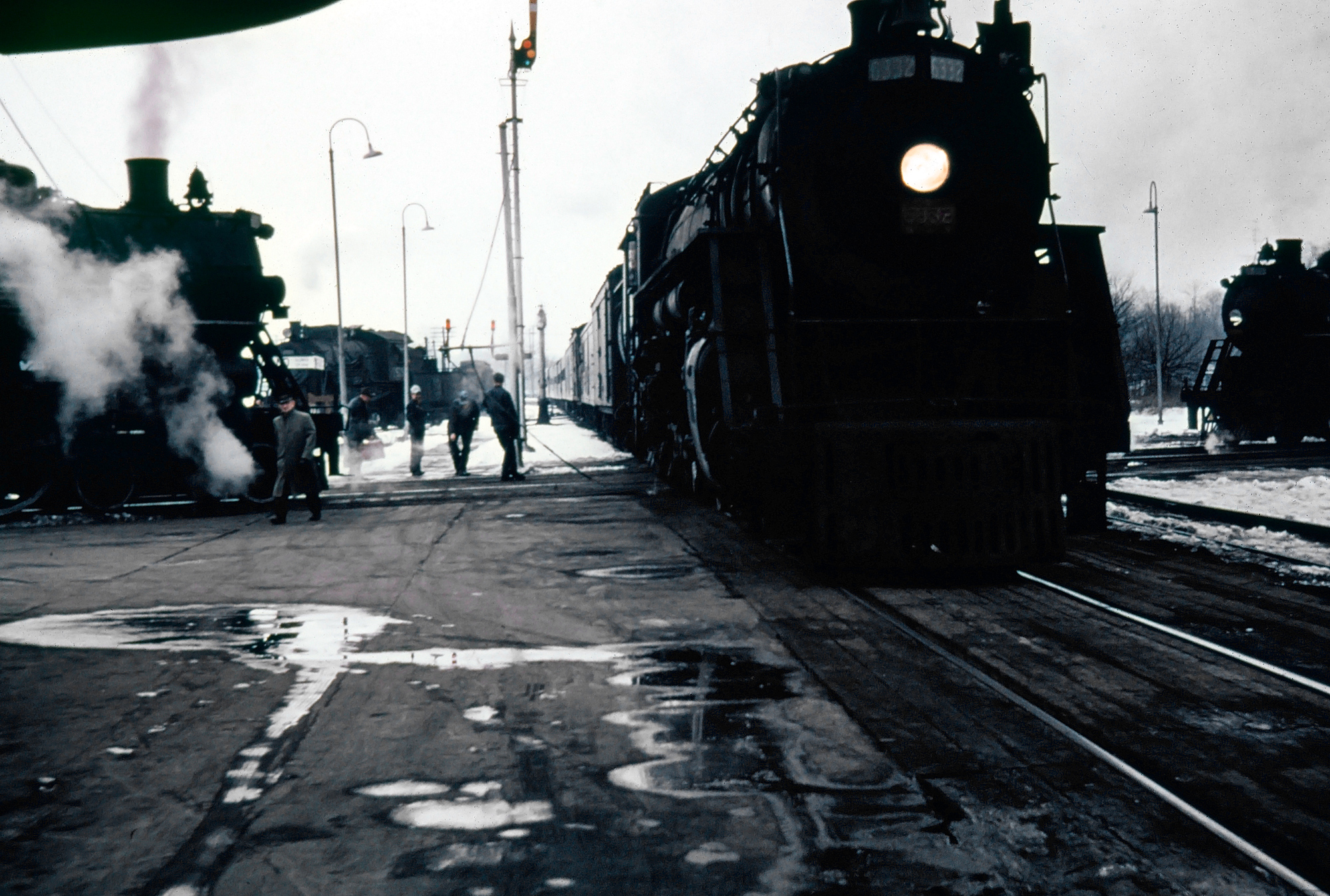 A busy scene along the Grand Trunk Western at Durand, Michigan during a cold winter's day in the 1950s. Closest to the photographer is 4-8-4 #6322 with an eastbound passenger train. A.C. Kalmbach photo. American-Rails.com collection.


Today, all of these railroads operate just over 3,600 miles of track in the Great Lakes State, which is a just a fraction of Michigan's all-time of 8,734.

The state has lost a staggering 59% of its rail infrastructure since the 1920s and more than 5,000 miles overall.

Michigan has been hit especially hard by abandonments; several through lines have been pulled as well as hundreds of miles of secondary and agricultural corridors.

To date, more than 5,300 miles have been removed.  The abandonments have largely been secondary corridors.  However, there are notable losses such as:


This number is even well above the average of most states, which have seen a decline typically between 45% to 50%. Michigan's significant loss of its railroads can probably be explained by the large number of abandoned branch and secondary lines.

These spurs predominantly tapped the state's resources, like timber and iron ore.  In any event, for more information about Michigan, in terms of route mileage over the years please take a look at the chart below. 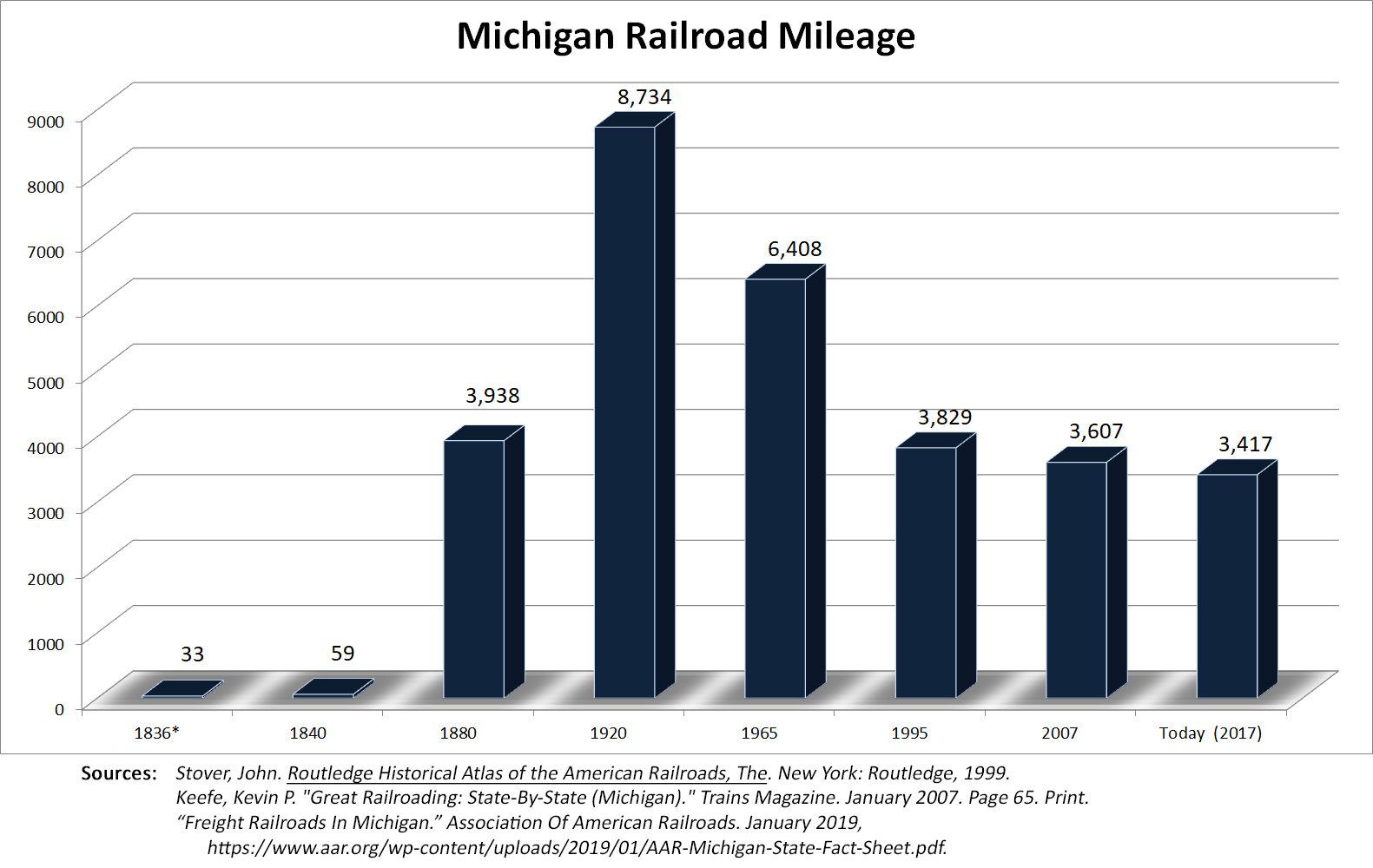 * Michigan's first railroad put into service was the Erie & Kalamazoo, chartered on April 22, 1833 to connect Port Lawrence (now known as Toledo, Ohio) with the Kalamazoo River via Adrian, Michigan.  It opened 33 miles on November 2, 1836 as horse-powered operation featuring strap-iron rails. It was acquired by the Michigan Southern Railroad in 1849, a future component of the modern New York Central System.

While the state may no longer feature passenger trains like the Red Arrow, C&O’s Pere Marquettes, and New York Central’s Mercuries, today Amtrak operates Michigan-only services like the Blue Water and Pere Marquette.

Amtrak also owns its only stretch of trackage outside of the Northeast Corridor in Michigan which is the 97-mile, 110 mph Wolverine Corridor that connects Detroit and Pontiac with Chicago. To learn more about Amtrak's current services in Michigan please click here to visit their website. 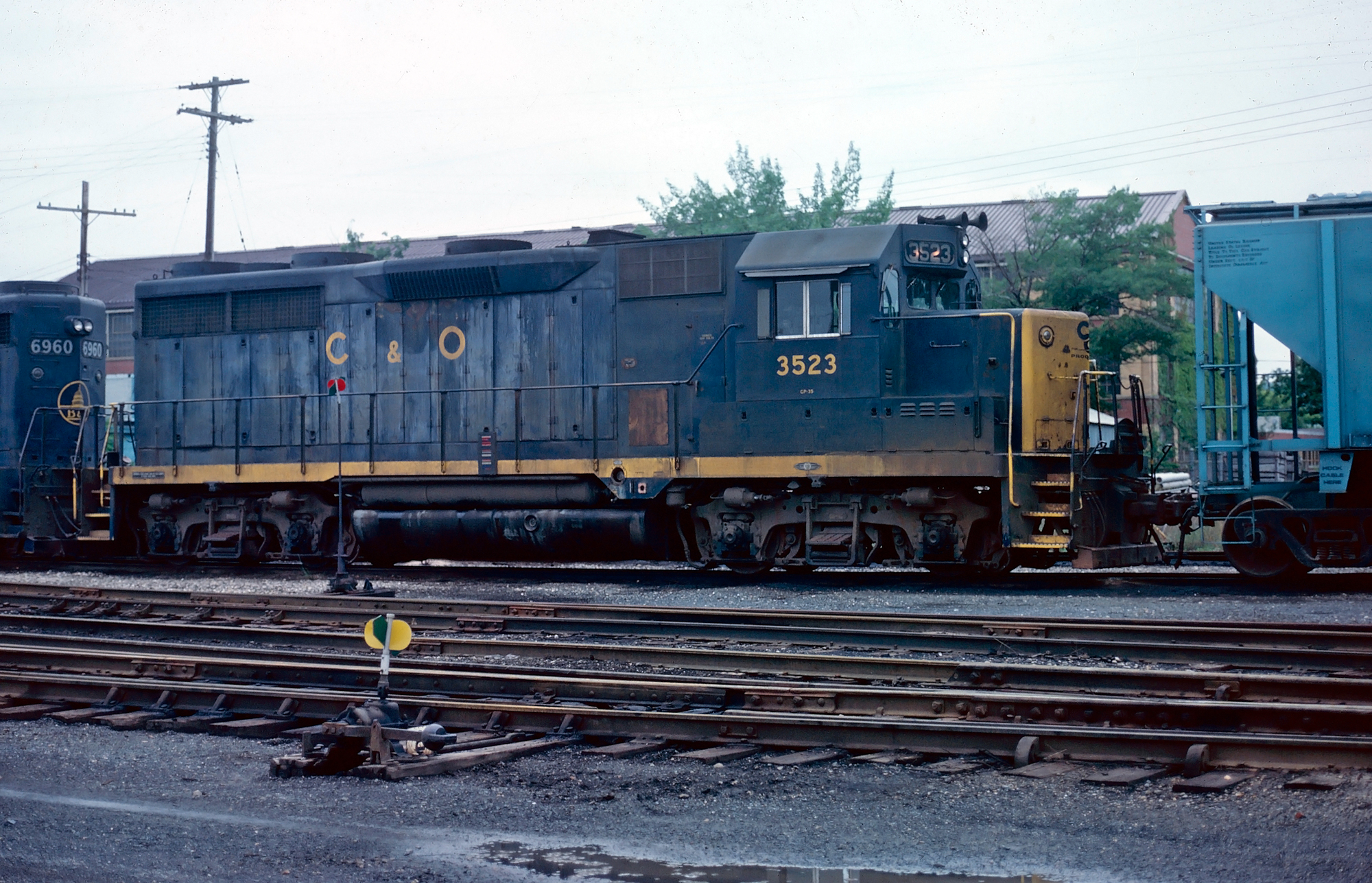 In terms of the state's history it is home to several railroad museums and excursion trains (for instance, Michigan is also home to Pere Marquette #1225, the operational 2-8-4 Berkshire steam locomotive owned by the Steam Railroading Institute and was featured in the Polar Express).

So, whatever your interests might be, Michigan railroads offer a unique experience of Class I, main line operations as well as several local “down by the depot” short lines.

And, if these tire you out after a while be sure and ride one of the state’s several dinner and excursion trains!