The Meridian & Bigbee Railroad (reporting marks, MNBR) is a historic shortline that was built to serve the town of Meridian located in east-central Mississippi.

The company's origins can be traced back to the very early 20th century and it did not complete its original main line until the mid-1930s.

Additionally, until the early 1950s the system was known by a different name. The M&B has, for most its existence, relied on wood-based products although with so many interchanges with Class I lines has also allowed it to move a much wider variety of freight than it would have otherwise been able to haul.

Since the 1950s the railroad has seen just two owners with the Genesee & Wyoming picking up the property in the mid-2000s.

Today, the company has a very diverse traffic base and has more than doubled its traditional length thanks to purchasing two lines from CSX Transportation which has allowed to reach the city of Montgomery. 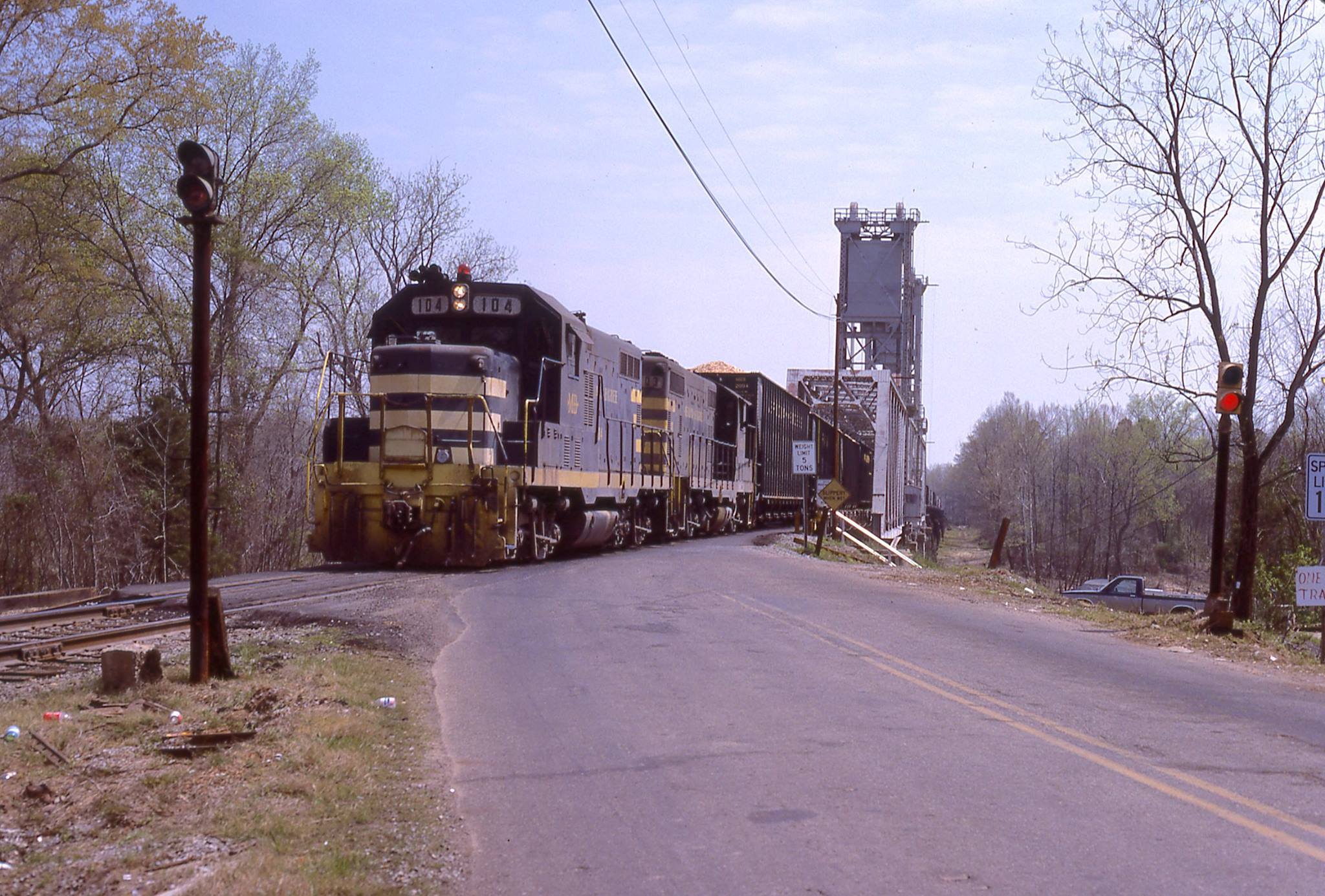 Meridian & Bigbee GP10 #104 and GP7 #103 lead their freight westbound across the Naheola Bridge, a joint railroad/highway span crossing the Tombigbee River, at Pennington, Alabama in the 1980's. It remains active for railroad use but a separate bridge was built just to the south for State Route 114, completed in the early 2000's. Warren Calloway photo.

After several different owners this line eventually came under the control of the Illinois Central reaching Vicksburg and continuing westward into Louisiana.

Interestingly enough, even by the early 20th century there was still no railroad connecting Meridian due east into Alabama except for the Alabama Great Southern Railroad line (a later Southern subsidiary) that was extended northeast to Tuscaloosa and eventually reached Chattanooga, Tennessee.

Realizing this, Meridian board of trade president S.A. Neville began studying the possibility of chartering a new railroad to be constructed directly east over the Tombigbee River. 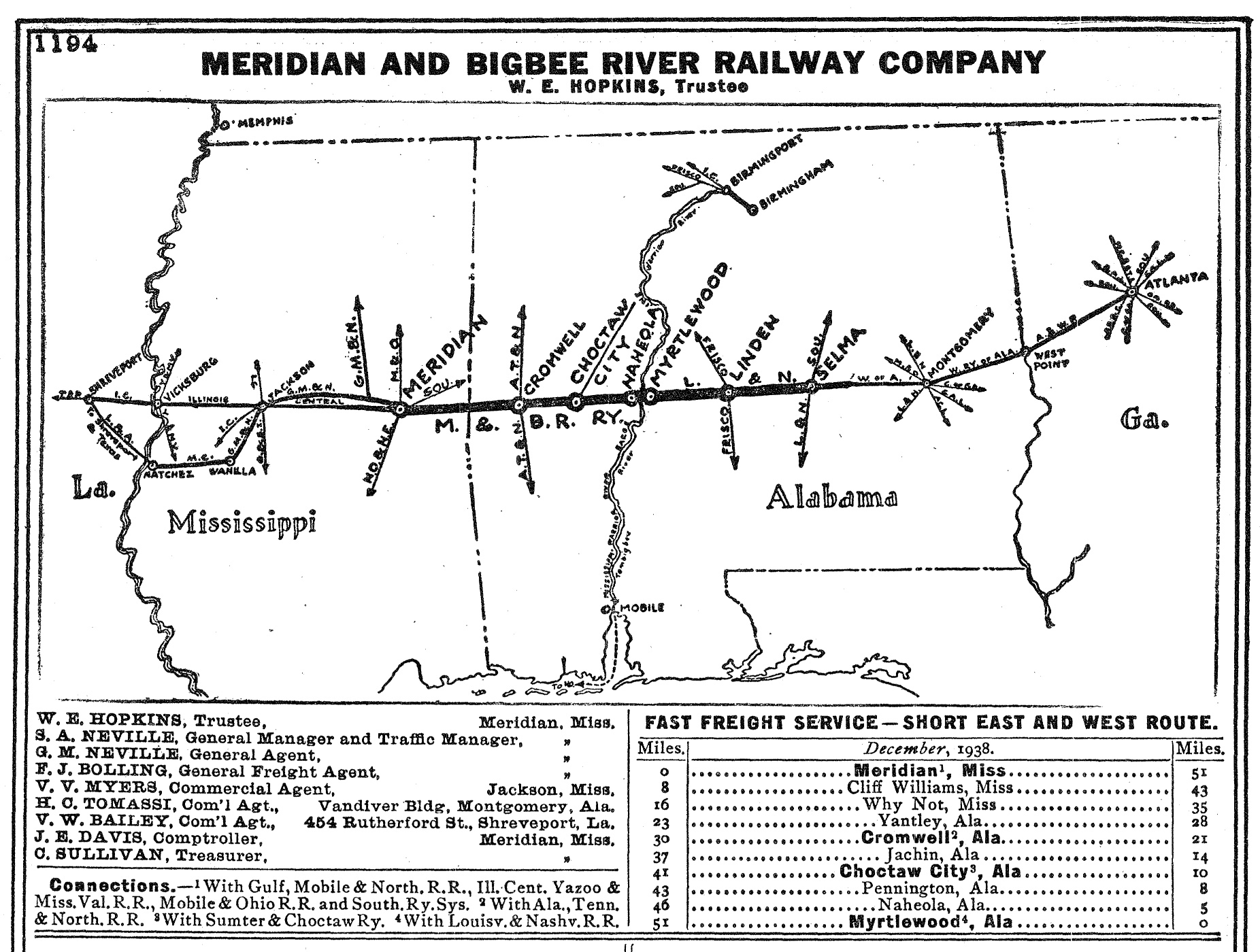 This culminated with the organization of the Meridian & Deep Water Railway Company founded on April 5, 1911 and grading began later that year.

Unfortunately, it was determined that the road could not be built due to the right-of-way being too near the city's primary drinking water supply.

In the meantime Mr. Neville worked on promoting other new rail lines radiating to the west such as the Jackson & Eastern Railway, which became a subsidiary of the Gulf, Mobile & Northern (which itself wound up as part of the north-to-south Gulf, Mobile & Ohio).

Not long after the J&E was chartered Neville again attempted to open a new western extension chartering the Meridian & Bigbee River Railway on January 23, 1917. This time he had more success although it took nearly a decade, until late December of 1926 for construction to begin.

Within two years the railroad was opened between Meridian and Cromwell, Alabama a distance of 29.87 miles (listed as exactly 30 miles on the company timetable).

Funding issues delayed any further expansion for several more years, part of which was due to the Great Depression of the late 1920s.

Finally, on October 15, 1935 the M&BR was opened to Myrtlewood and a connection with the Louisville & Nashville giving the railroad a total system of 51 miles.

In all, it had a total of five interchange partners which, aside from the L&N, included the Southern, GM&O, Illinois Central, and short line Alabama, Tennessee & Northern a St. Louis-San Francisco Railway subsidiary (at Cromwell).

Finally, after 17 years of opening its latest extension the company was renamed as the Meridian and Bigbee Railroad in July of 1952.

During the steam era the road relied on mostly smaller wheel arrangements such as 2-6-0 Moguls, 4-6-0 Ten-Wheelers, 2-8-0 Consolidations, and 4-6-2 Pacifics.

Virtually all of these locomotives were acquired secondhand, most of which were purchased from neighbor IC.

Just after the company was reorganized it purchased its first new diesel in August, GP7 #1 which was followed by GP9 #102 in April of 1957.

Most of its diesels, though, were also picked up used from rebuilt GP7s and GP9s to Santa Fe-built CF7s and a large roster of GP38s.

In the 1960s the M&B came under the ownership of the James River Corporation which had built a large paper mill on the eastern end of the railroad at Naheola, Alabama.

During this era primary traffic included paper, of course, as well as pulp and chemicals and various types of bridge traffic via its interchange partners.

Until 2005 James River maintained its ownership of the M&B at which point the road was sold to the Genesee & Wyoming family of shortlines.

Just prior to this the railroad acquired the former L&N line between Myrtlewood to Selma, Alabama and later the ex-Western Railway of Alabama/West Point Route section from there to Montgomery.

In all, these additions added more than 90 miles of additional trackage and the company now boasts a system of 145 miles.