Historically, railroads in Maine have thrived on its natural resources, notably wood products and agricultural (potatoes).

At one time the Pine Tree State was home to both standard and 2-foot, narrow-gauge railroads.  These latter operations primarily moved timber but also transported general freight and, in some cases, passengers.

One such railroad has partially been rebuilt, the Wiscasset, Waterville & Farmington, which today hosts trips during the warmer months of the year (the museum continues to rebuild a section of the old right-of-way as money and time permits).

Another is the Maine Narrow-Gauge Railroad & Museum whose mission is to preserve the state's narrow-gauge history.  There are also standard-gauge attractions, such as the Downeast Scenic Railroad based in Ellsworth.

If you would rather visit a museum, there are several to choose from like the Oakfield Railroad Museum, Cole Land Transportation Museum, and Seashore Trolley Museum. 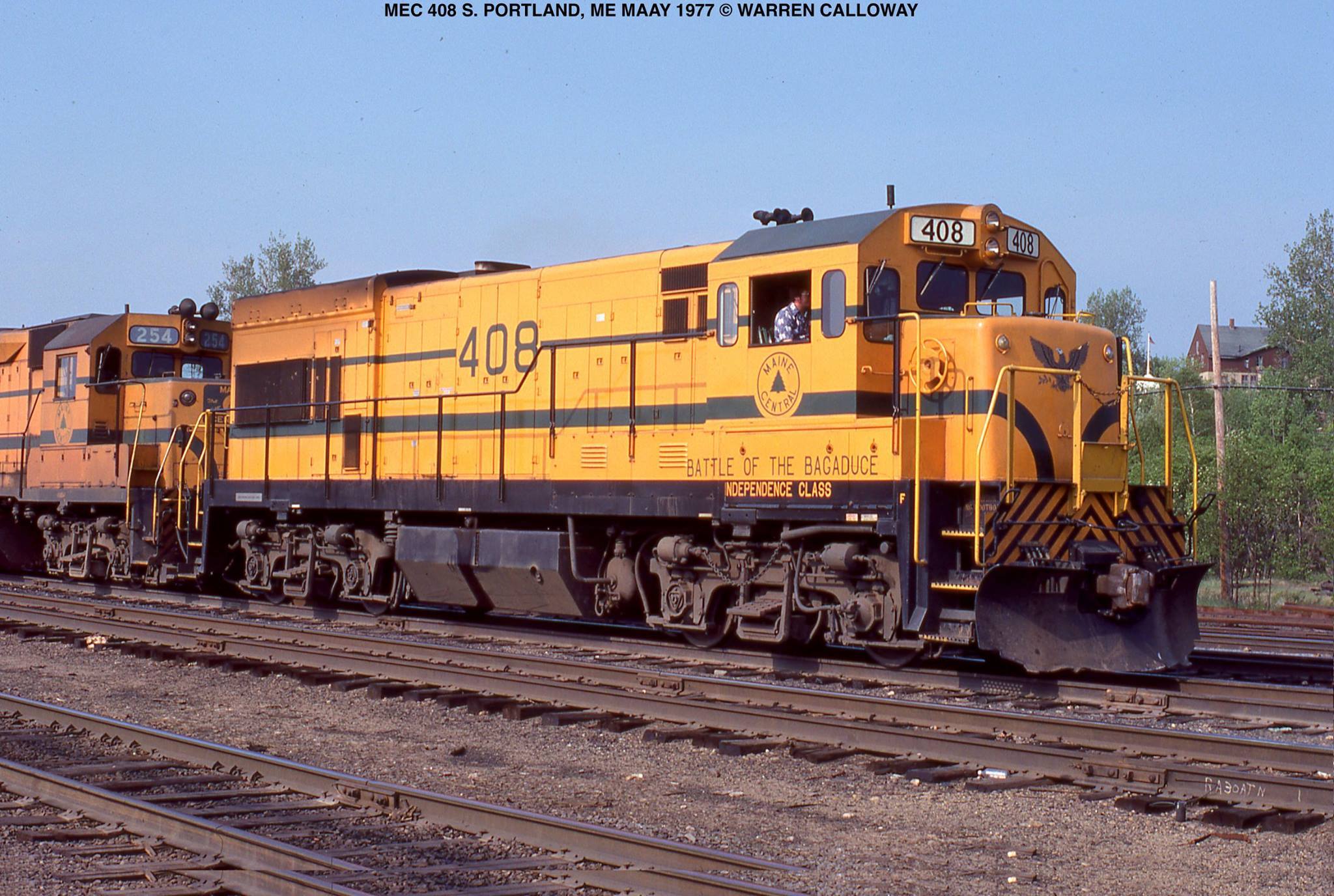 A Brief History Of Maine's Railroads

Maine's very first railroad was the Calais Railroad, incorporated on February 17, 1832.  Its purpose was to move finished lumber from a mill situated along the Saint Croix River (near Milltown, New Brunswick) to Calais, Maine.

It opened in 1835 and later became part of the St. Croix & Penobscot Railroad, which wound up within the much larger Maine Central's (MEC) network.

Following the Calais Railroad was the Bangor & Piscataquis Railroad & Canal Company; incorporated on February 18, 1833 it opened an 11-mile route from Bangor to Oldtown in November, 1836.

It later became the Bangor, Old Town & Milford Railroad when tracks reached further north to Milford during the 1850's.

In 1869 it was acquired by the European & North American Railway, which was folded into the Maine Central in 1882 (initially via lease).

The MEC was one of Maine's most prominent railroads, serving much of is lower territory (in addition to a long branch reaching Vermont).

The state's other notable was the Bangor & Aroostook; situated further to the north its slogan perfectly described its situation, "Serving Northern Maine."

It provided vital transportation services to potato farmers and timber companies, linking such points as Van Buren, St. Francis, and Caribou to Bangor and Searsport along the Penobscot River.

A look at Maine's rail history would not be complete without mentioning its 2-foot operations.

The use of this odd gauge is credited to George E. Mansfield of Boston who, according to Dr. George Hilton's book, "American Narrow Gauge Railroads," was inspired by the Festiniog Railway in Wales during a visit there in the early 1870's.

It carried a gauge of a 1 foot, 11 1/2 inches.  Mansfield would later go on to construct the Billerica & Bedford Railroad which opened between North Bellerica and Bedford, Massachusetts on September 1, 1877.

The 2-foot concept caught on in Maine which led to the following railroads:

According to John Stover's book "The Routledge Historical Atlas Of The American Railroads," mileage in Maine peaked at around 2,300 miles during the 1920's.

Thanks to its history with two-footers, Maine scenic train rides offer the best (and most) narrow-gauge excursions anywhere east of the Mississippi River.

You can even catch a trolley ride in restored trolley cars at the Seashore Trolley Museum. Many of the state's tourist lines offer holiday specials and other similar events throughout the year so be sure and check out their websites if interested.

The attraction's seasons runs from May through late October.  They also feature other, non-railroad artifacts within their collection.

Their official mission statement is to "conserve, display and interpret artifacts, authentic period structures and technologies utilized in Maine during the historical period of the Mid-19th through the Mid-20th Centuries."

There are also others either on display or under restoration.  These include: 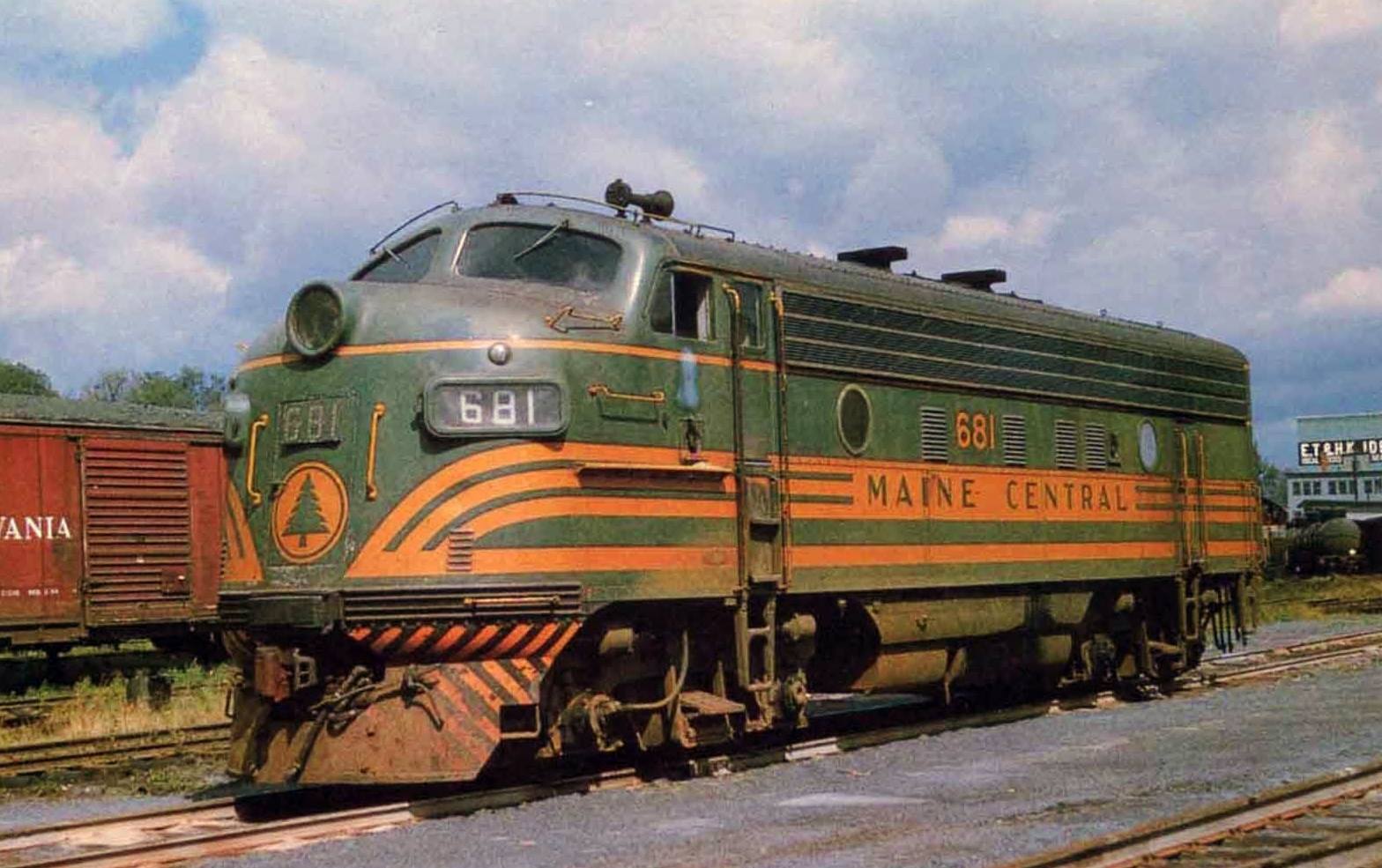 This organization, created in 2008, operates what remains of the venerable Belfast & Moosehead Lake, a 33-mile short line that opened between Belfast and Burnham on September 24, 1870 (to learn more about the history of this historic operation please click here).

Their excursions operate from the small, restored Brooks union depot (opened in the 1890's, it served trains of the Maine Central and Belfast & Moosehead Lake).

They also offer special rides and events during this time.  The group's goal is to preserve this classic railroad for future generations with an official mission statement:

"...to protect, preserve, and celebrate historic structures and artifacts in Brooks as well as the surrounding communities for the benefit of the citizens and local economy. The preservation and restoration of structures in a community contributes to the economic vitality."

This museum, based in Bangor, preserves a wide-range of transportation related equipment from automobiles and rail cars to farm tractors and motorcycles.

They are open from May through November each year.  The organization was founded in 1989 by Galen Cole.

Their notable railroad pieces include:

Aside from these pieces they feature a Stanley Steamer, Ford Fairlane, Ford Galaxie, a Buick, a Volkswagen, horse-drawn wagons, prairie schooner, motorcycles, mopeds, and much more.

If you are interested in either trains or motorized equipment, in general, a visit to this museum is definitely a must!

It is owned by the Downeast Rail Heritage Trust, a 501(c)3 non-profit organization formed in 2005.  The attraction officially launched in July, 2010, offering scenic train rides via a 10-mile round-trip along Bar Harbor.

The group's mission "...is to celebrate and preserve the railroad history of Downeast Maine for the education enlightenment and enjoyment of future generations."

In many ways, this organization is the state's best known, attracting many visitors each year.

The group operates a number of special events and trains throughout the year such as The Polar Express during the Christmas season.

Finally, they maintain two small diesels which can occasionally be found in service; both were products of the Plymouth Locomotive Works and include a 9-ton and 4-ton switcher. 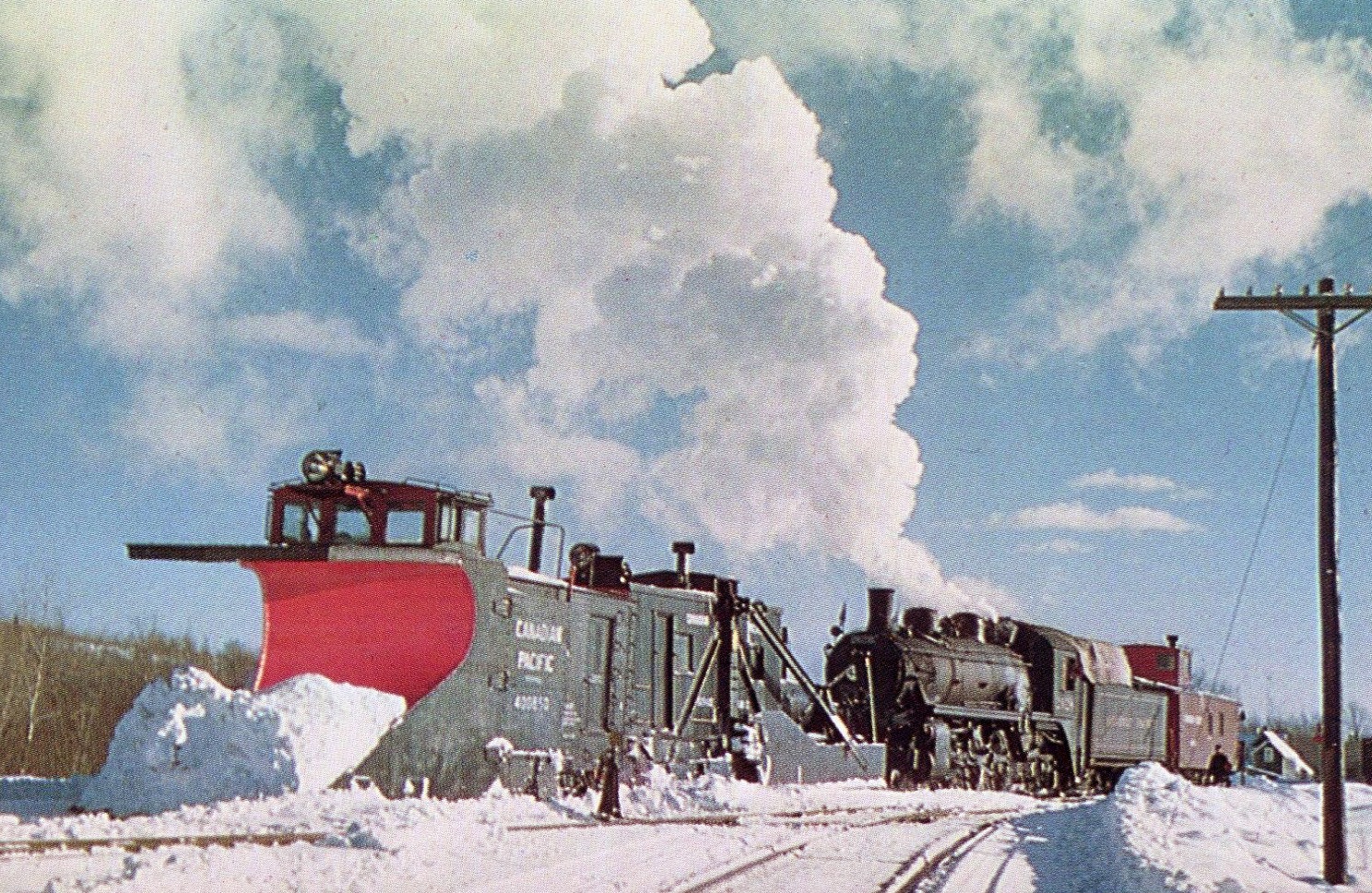 This museum is located in Oakfield, within the town's restored Bangor & Aroostook wooden depot (opened in 1912) where the tracks are still active (maintained by Class II "regional" freight carrier, Central Maine & Québec Railway).

As the passenger business declined the BAR (not to be confuse with the "B&A," short for the Boston & Albany) focused evermore on its core freight business; by the early 1960s it had dropped passenger operations entirely with the Potatoland making its last run on September 4, 1961.

Unfortunately, with the cyclical nature of agriculture and increased competition from other modes of transportation, the railroad found itself in bankruptcy by 2003.

The depot has been listed on the National Register of Historic Places since June 25, 1987.  Along with displays they also feature a caboose on the premises.  The museum is open on the weekends from late May through Labor Day.

This museum is located in Phillips where they have a collection of rolling stock on display.

They also offer excursion rides from late spring through early fall each year.  The organization gained their name from the historic Sandy River & Rangeley Lakes, the largest 2-foot railroad ever operated in the United States.

At its peak the SR&RL maintained about 101 miles and was acquired by the Maine Central on August 31, 1911.

The Seashore Trolley Museum's main objective is to preserve the region's interurban history.

As the world's largest and oldest such museum (launched in 1939) the organization has hundreds of preserved trolley cars, some of which are in operation and used to ferry visitors on its 1.5-mile restored segment of track.

The former included the Portland-Lewiston Interurban Railroad (started as the Portland, Gray & Lewiston in 1907 it linked Portland and Lewiston in 1914) and the Aroostook Valley Railroad (a project of Senator Arthur R. Gould, it was organized in 1910 and opened 33 miles between Presque Isle, New Sweden, and Caribou). 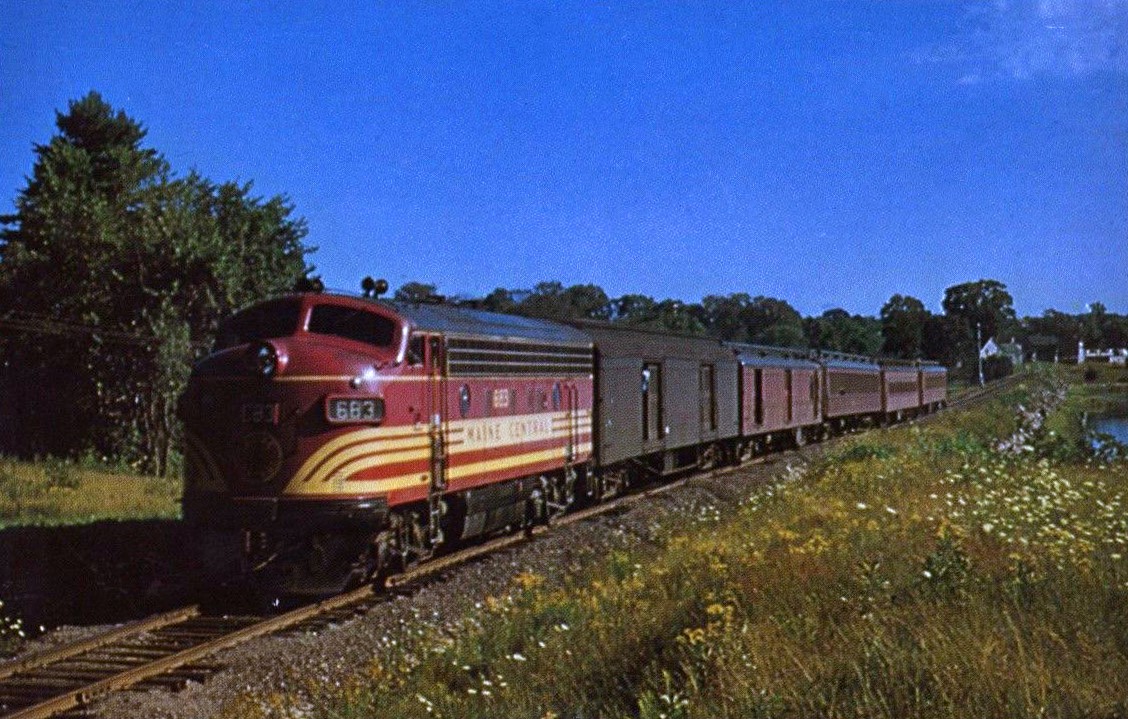 Yet another 2-foot, narrow-gauge the Wiscasset, Waterville & Farmington Railway is a relatively new operation offering scenic train rides over a very old right-of-way.

The original Wiscasset, Waterville & Farmington Railway, charted on April 15, 1854 as the Kennebec & Wiscasset, stopped operating in the early 1930's.

At its peak the system was second-only to the Sandy River & Rangeley Lakes in size, linking Wiscasset with Waterville and Albion.  At its peak it maintained a nearly 60-mile network.

Beginning in 1989 a group of preservationists began working to bring back a segment of the railroad for excursion purposes and today maintain over 2.5 miles of track.

The WW&F uses an 0-4-0RT steam locomotive to pull its trains during the summer months (the original locomotive was built by the Portland Company in 1891).

They also operate specials throughout the year, including during the holiday season.