Missouri Railroads In "The Show Me State"

Much like Illinois, Missouri is stuffed full of action and excitement with six of the seven North American Class I systems operating within the state, all of which serve either St. Louis and/or Kansas City.

The Show Me State also has a rich history with the prominent, historic stations that serve Kansas City and St. Louis hosting between twelve to nineteen Class I systems during the “Golden Age” of rail travel, more than any other.

Missouri can also claim a history of being home to more headquarters of Class I railroads than any other state with Kansas City Southern still calling its namesake city home. And, the Show Me State remains right at or near the top of rail tonnage moved today.

Prior to today's mega-merger Class Is, Missouri was also once home to numerous classic railroads as eastern lines looked to interchange freight with western carriers at the important gateway of St. Louis. 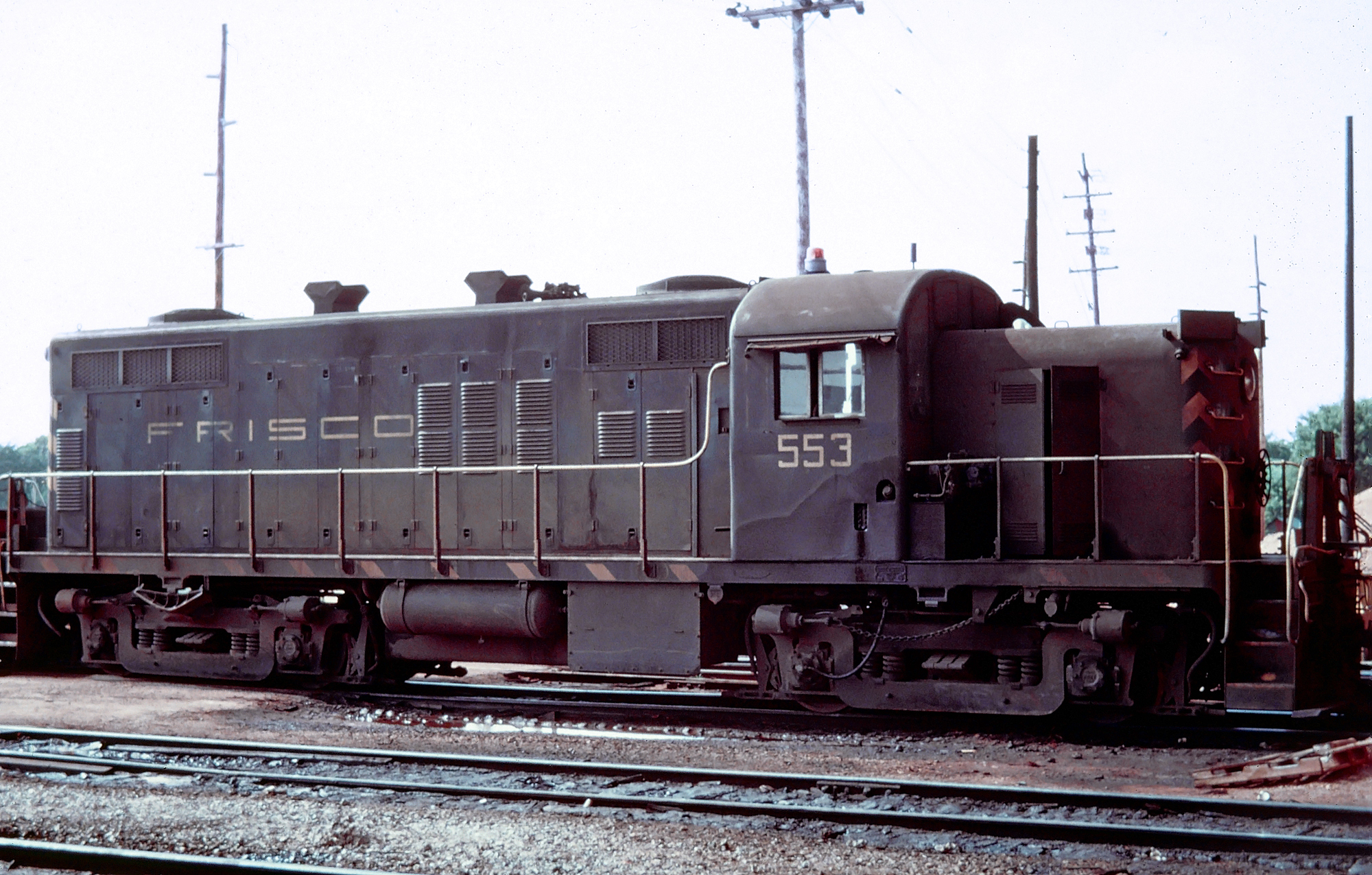 Missouri railroads date back to 1849 when the Pacific Railroad (predecessor to the Missouri Pacific) was chartered to connect St. Louis with points to the west.

The railroad was conceived by the leaders of St. Louis who had hoped to see the railroad stretched to the Pacific Ocean, hence its name.

Missouri location and fertile lands made it a magnate for railroad development; not only did it provide ideal agriculture conditions but also contained two important cities; St. Louis and Kansas City.

This led to numerous rail lines scattered all across the state, heading both east-west and north-south.  Like other granger states, Missouri was hit hard by abandonments during the 1960-1990 time period, particularly following deregulation and many bankruptcies.

All granger states lost considerable secondary branch lines during this time and Missouri was no different.  However, the state was also affected by through route abandonments as well including:

The railroad formerly began construction on July 4, 1851 and began operations on a short stretch of track a year later in 1852.

The company had difficulty obtaining strong financial backing and the onset of the Civil War in 1861 further delayed construction.

Not until 1865 after the war was over did the Pacific Railroad finally reach Kansas City to the west, the first to so do. 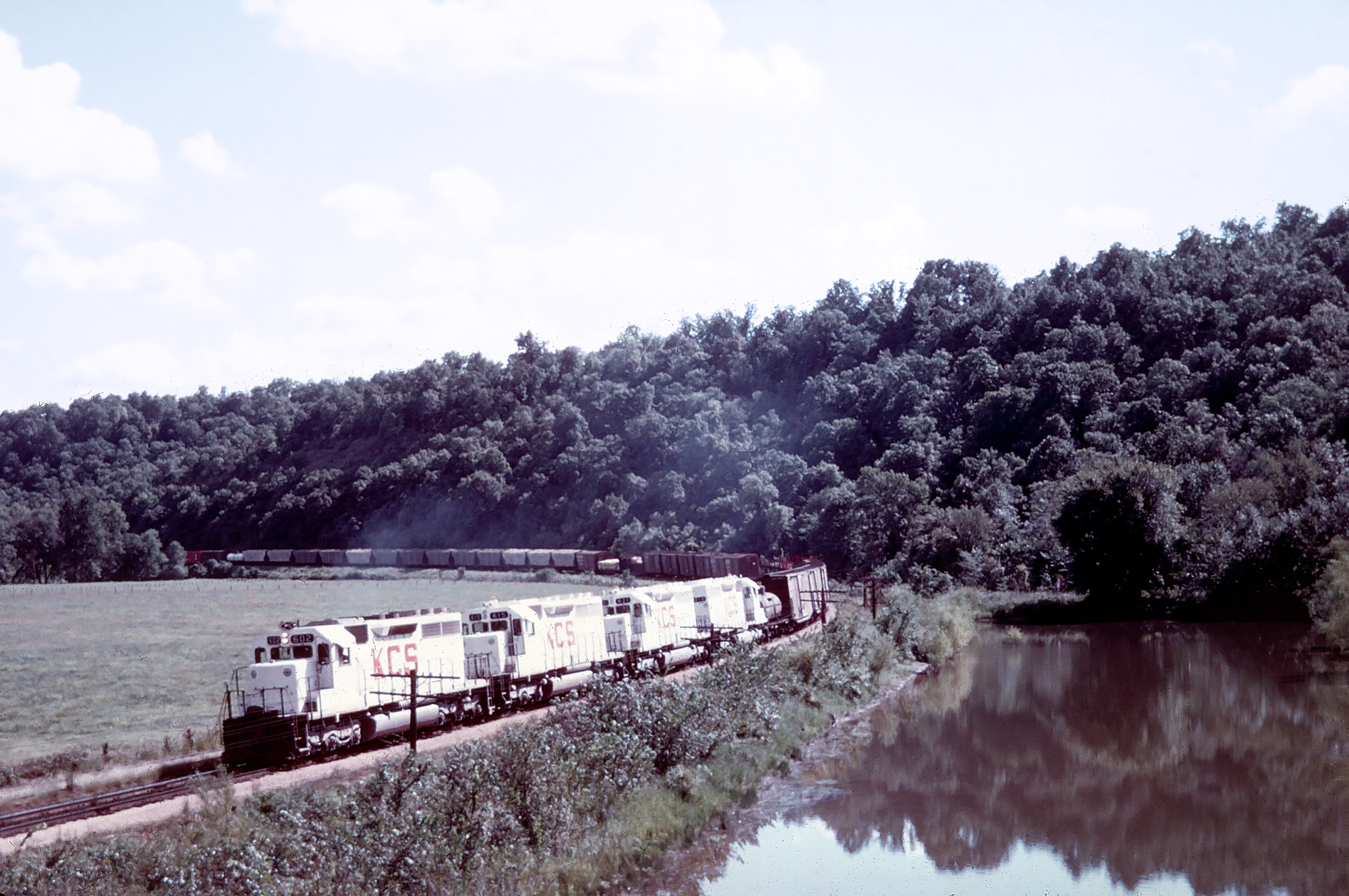 A quartet of new Kansas City Southern SD40's, led by #602, round a sweeping curve near Noel, Missouri in the summer of 1967. American-Rails.com collection.

The company operated independently for another seven years before it was reorganized in 1872 as the Missouri Pacific Railway after new investors infused new capital into the operation.

The MP, of course, would go on to become one of the West's largest systems before becoming part of Union Pacific in the early 1980s.

As aforementioned with the two major cities of Kansas City and St. Louis located in the state they were prime locations for eastern and western systems to meet and interchange traffic. In the succeeding years the state would come to know several famous now-fallen flag systems.

This page primarily provides employment information for those looking for a career in the industry although it also offers brief backgrounds on the state's railroads.

Today, Missouri features a rail network consisting of around 4,100 miles of track. During the railroad industry's golden years of the 1920s, however, the state boasted an infrastructure of over 8,100 miles.

As such, Missouri has witnessed its rails decline by roughly 50%, a number all too common among most other states. In any event, for a more in-depth look at Missouri, in terms of route mileage throughout the years please refer to the chart below. 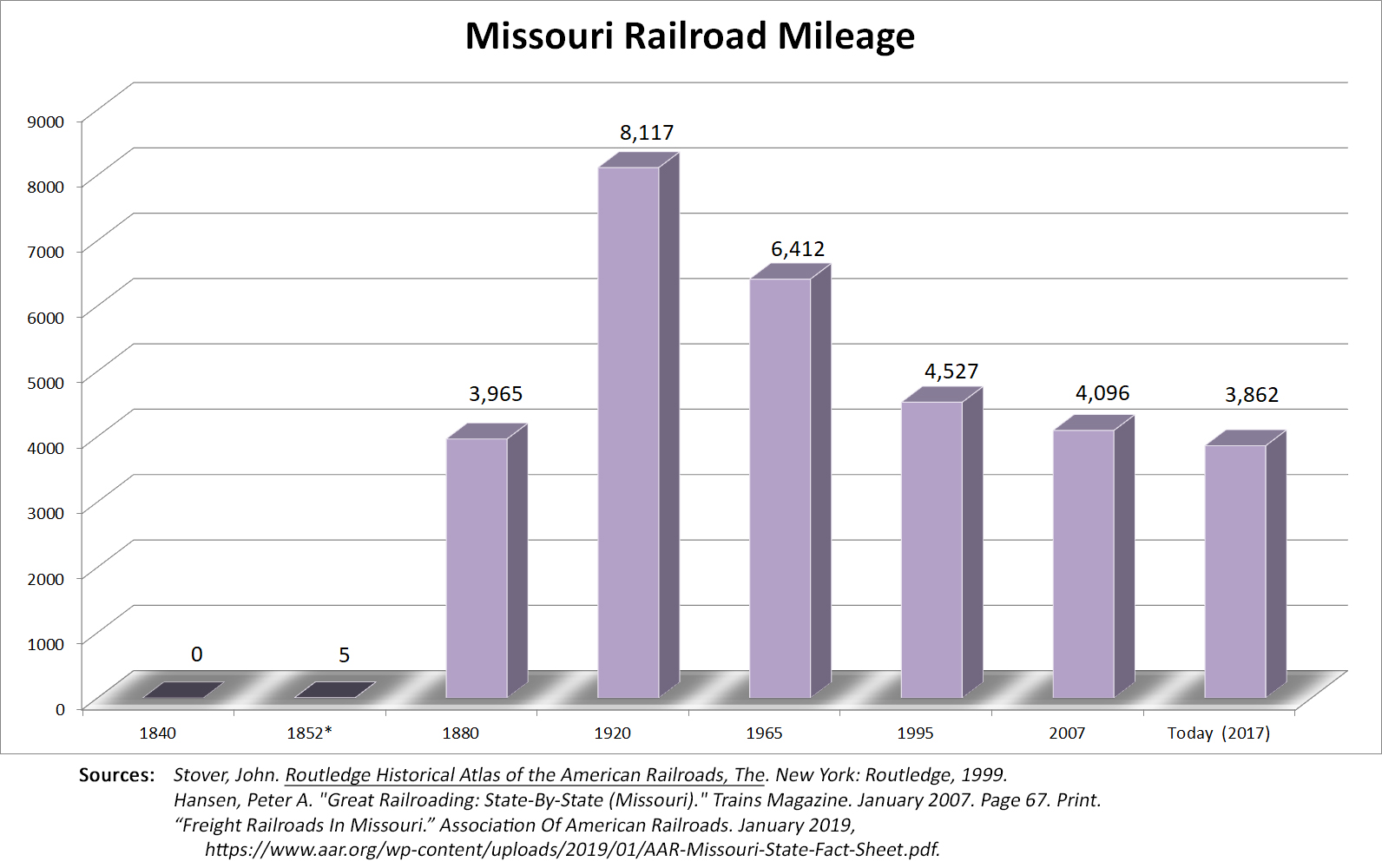 * Missouri's first railroad was the Pacific Railroad (PR) chartered in 1849 with intentions of connecting St. Louis with a transcontinental route to the Pacific coast.  Such grand aspirations never occurred although the system did open its first 5 miles between St. Louis and Cheltenham in 1852.  The railroad's corporate history is far too complicated to discuss in detail here but it was eventually acquired by the Missouri Pacific.

However, Amtrak continues to operate some of these names like the City of New Orleans along with others such as the Southwest Chief, Texas Eagle, Ann Rutledge (it also operates local and regional services). 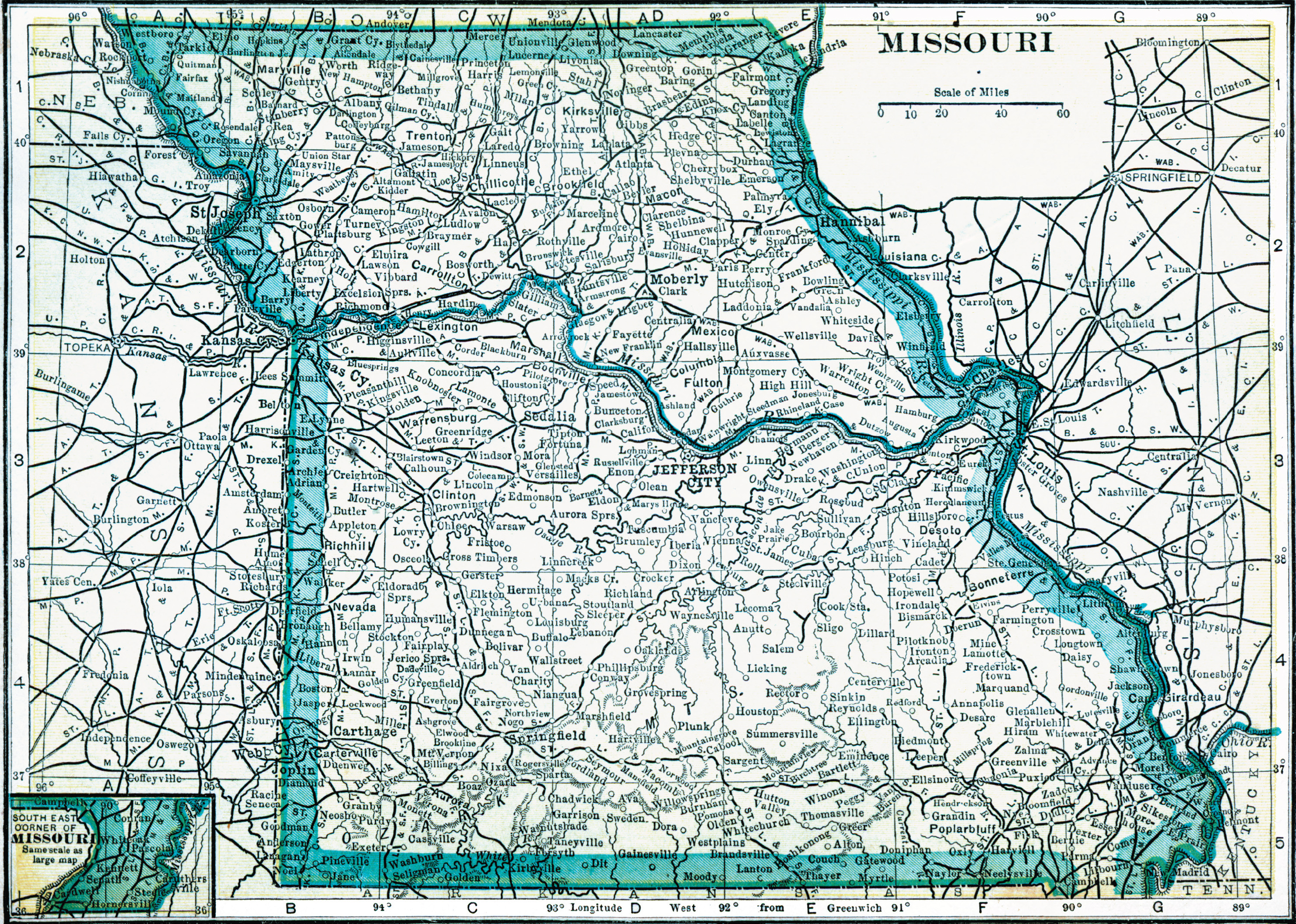 A Missouri Railroad map, circa 1909. At this time the state had all but reached its peak mileage. Author's collection.

If you would like to learn more about some of the famous passenger trains ("streamliners") that operated in Missouri please click here. Also, here is Amtrak's website if you would like to know what type of services the national carrier offers to and from Missouri. 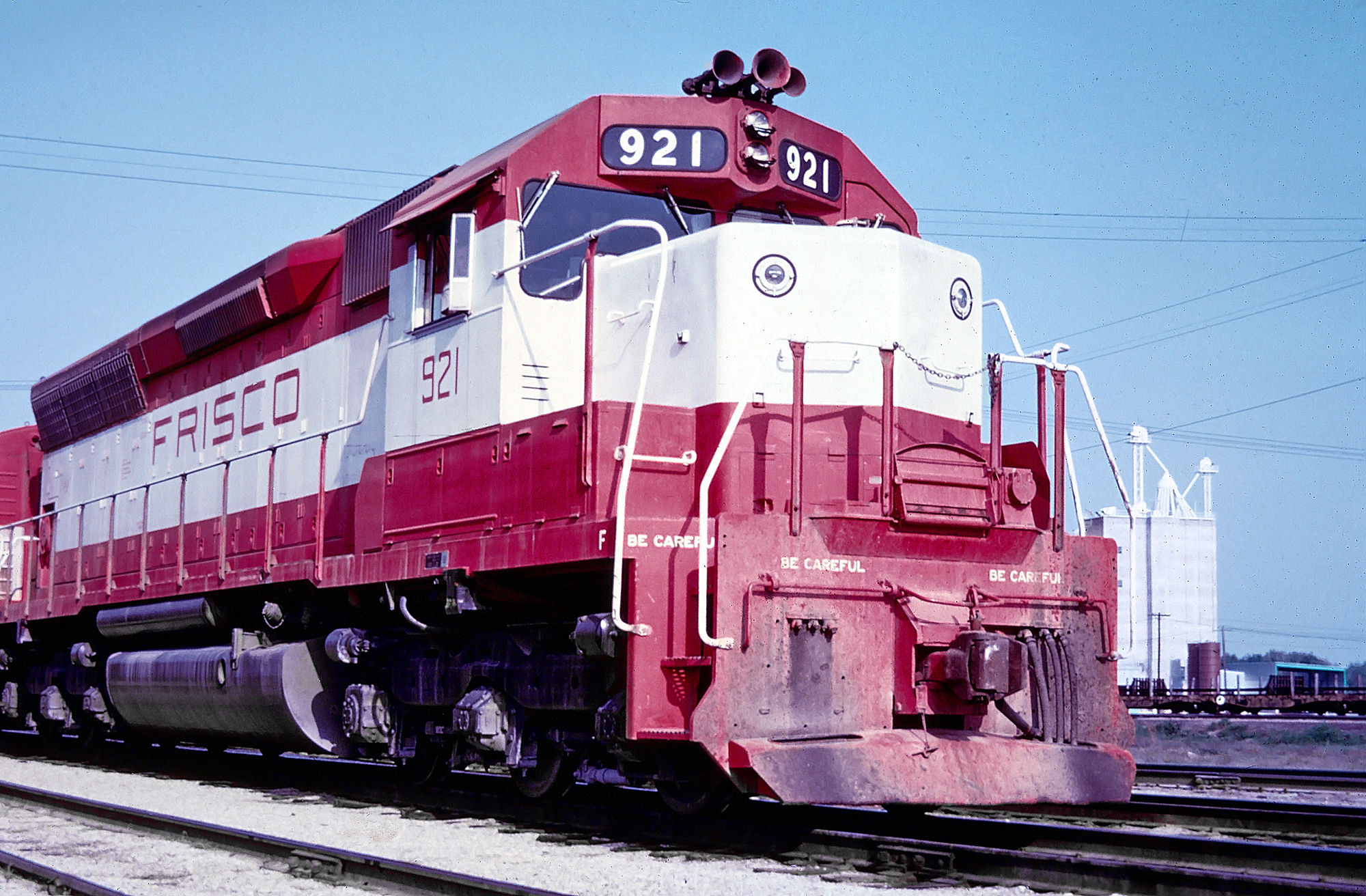 You may also be interested in visiting one of Missouri’s several railroad museums or tourist railroads. Some of these include the:

And to top things off be sure and stop by the historic union stations in Kansas City and St. Louis!  They don’t call it the Show Me State for nothing and Missouri railroads have plenty to offer from sightseeing while visiting museums to excursion trains and main line railroading.

So, have fun and with so many things to choose from, remember to pace yourself!