The Mohawk & Hudson would probably have been long forgotten within the history books had it not been for its important distinction as New York's first chartered railroad, created in the spring of 1826.

However, it took the M&H a few years until financing was in order to begin building its route. The company maintained its original name for about 15 years until it was renamed in the 1840s to better reflect the cities that it served, Albany and Schenectady.

Interestingly, the development of the M&H was to compete against the famed Erie Canal, which ran across the entire length of the state between Buffalo and New York City.

Aside from the Mohawk & Hudson's historical operational significance it also hosted one of the first steam locomotives ever put to use in the United States, the DeWitt Clinton. Today, much of the original M&H right-of-way is still in use by Class I CSX Transportation.

The Mohawk and Hudson Railroad was first incorporated on April 17, 1826 although as early as December 28, 1825 the local public was given word of the soon-to-be-built system thanks to a local newspaper article by George Featherstonhaugh.

Upon its creation the M&H was the second such system ever incorporated behind only the private Granite Railway of Massachusetts, formed a month earlier in March to move stone from a small granite quarry.

The railroad received its name for the two tributaries that it hoped to connect; the Hudson River at Albany and the Mohawk River at Schenectady.

Due to funding issues, however, it took more than four years until construction actually began. During this time a number of lines would be chartered and operated before the M&H including the B&O and South Carolina Canal & Rail Road based in the port city of Charleston.

A Mohawk & Hudson Railroad map (highlighted in blue), circa 1850, at which time it was known as the Albany & Schenectady. This is an excerpt from Sherman & Smith's "Railroad, Steamboat & Stage Route Map" of New England, New York, and Canada.

Finally, building of the line commenced in August, 1830 and due to the shortness of the route it was completed in just a year opening on August 9, 1831.

The M&H operated northwesterly from Albany to Schenectady using the Pine Bush topography that is located between both cities for its 16-mile right-of-way.

Soon after the line opened the company received its first steam locomotive, the DeWitt Clinton later that fall (the M&H also operated with real horse-power to complement its early steamers).

It was an 0-4-0 design and somewhat resembled the Stourbridge Lion operated on the nearby Delaware & Hudson Canal Company with a horizontal boiler, same wheel arrangement, and trailing carriage (early tender). 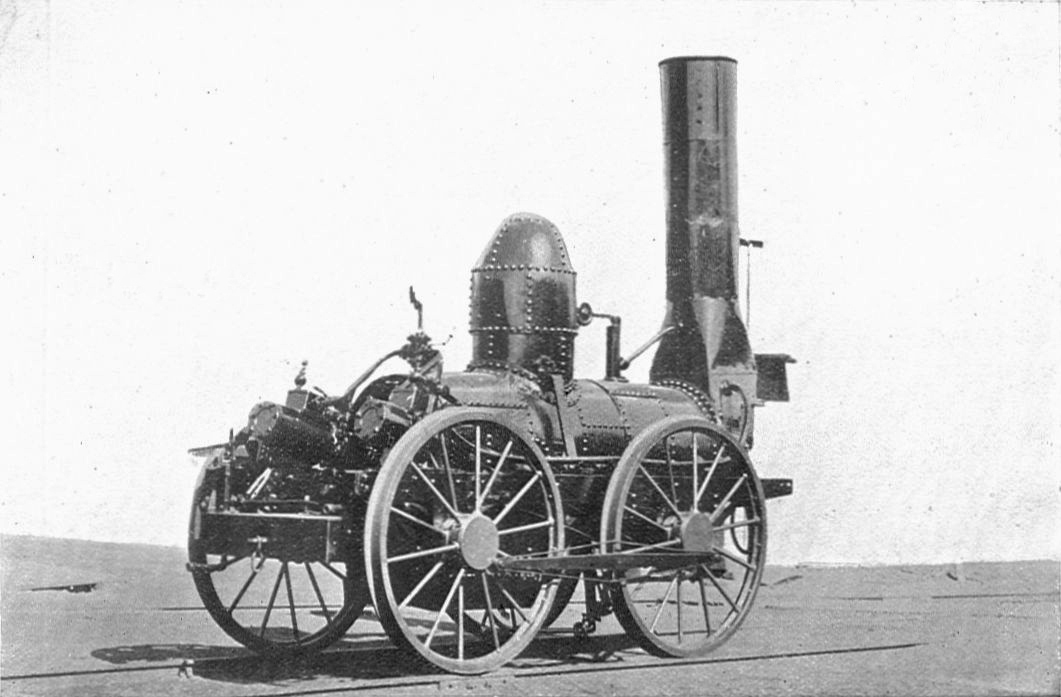 A photo depicting the "DeWitt Clinton" replica as the locomotive would have originally appeared, a small 0-4-0 design. Date unknown.

The Clinton was one of the first locomotives built in the United States, partially constructed at the West Point Foundry based in based in Cold Spring, New York (near NYC).

The foundry had also churned out the SCC&RR's Best Friend of Charleston and also rebuilt a number of early English-built steam locomotives upon arriving from Britain such as the Stourbridge Lion.

In service, the Clinton (named after one of New York's early governors who helped build the Erie Canal and had passed away only a few years earlier in 1828) could operate at speeds up to 30 mph.

Travelers, who rode in cars built from horse carriages (and sat either inside or rumble seats placed on the roof) quickly realized that travel by train was much faster, just 40 minutes, rather than trying to ride by boat along the waterway.

Between only Albany and Schenectady the Erie Canal utilized more than a dozen locks adding a tremendous amount of time, which required several hours to navigate. 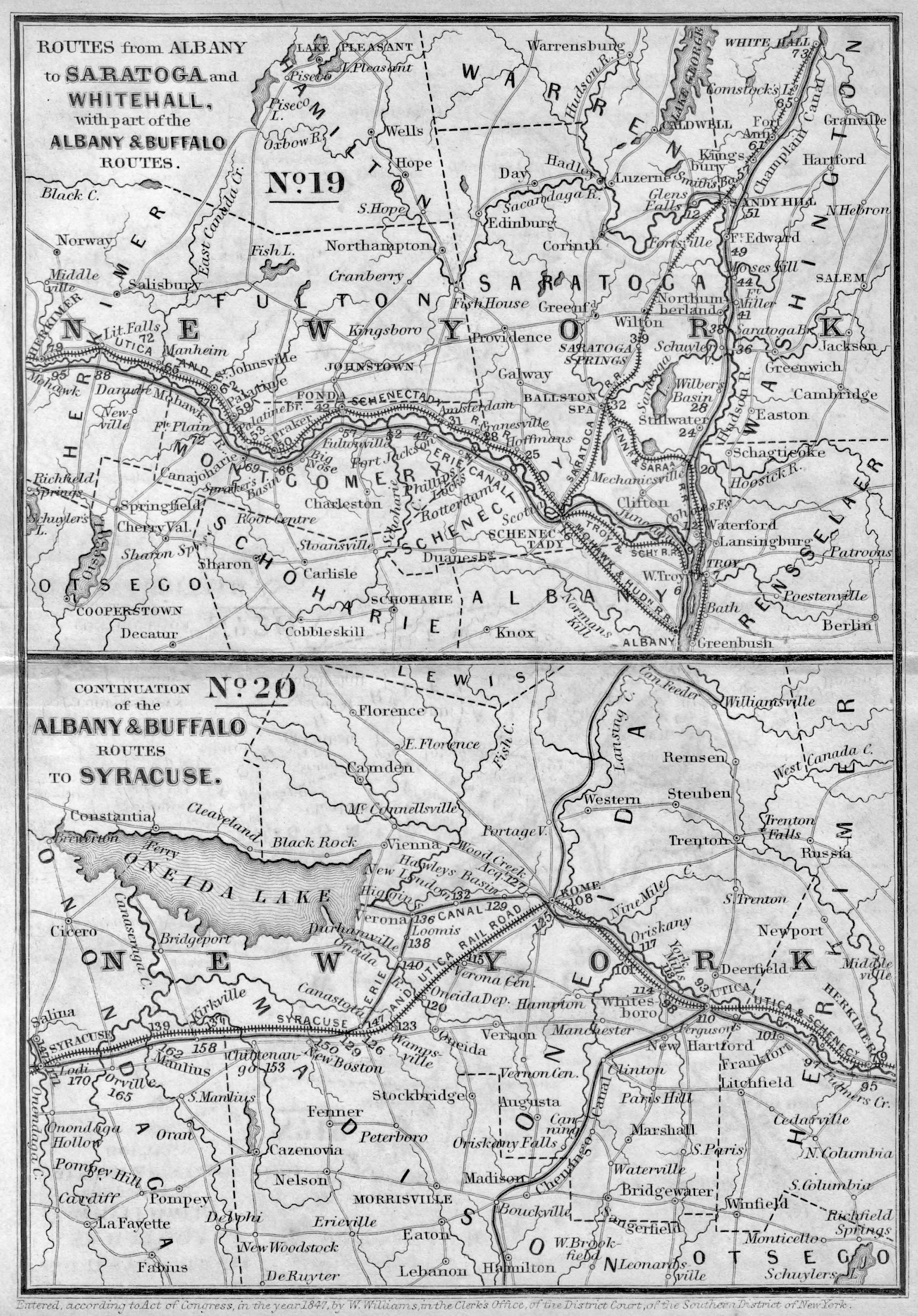 The DeWitt Clinton operated on the M&H for only a few years before being scrapped in 1833. On April 19, 1847 the railroad changed its name as the Albany & Schenectady to better reflect the cities that it served.

On March 17, 1853 the company disappeared forever into the New York Central Railroad, an early predecessor of the later New York Central System (the M&H route would become part of the NYC's "Water Level Route" between New York and Buffalo). 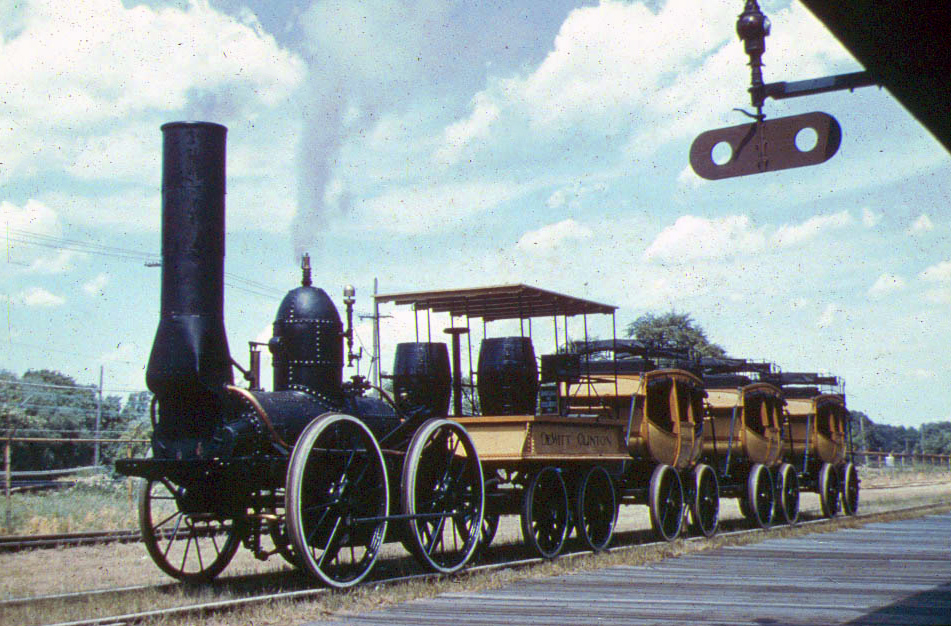 This color photo from the 1939's World's Fair show's the replica Dewitt Clinton locomotive used on the Mohawk & Hudson.

Essentially, the creation of this system put the Erie Canal out of business as a major freight artery.

Interestingly, much of the original M&H main line survived through the years since it offered such a direct connection between the two cities despite having its right-of-way adjusted or improved during that time.

Perhaps most surprising is that the line survived through the creation of the Consolidated Rail Corporation (Conrail) in the spring of 1976.

In an effort to again become profitable the company abandoned thousands of miles of former Penn Central, Lehigh Valley, Erie Lackawanna, and other trackage it deemed redundant but spared the M&H route.

During Conrail's 1999 split between Norfolk Southern and CSX Transportation the latter received the M&H line becoming part of its Hudson Subdivision. It is the oldest section of CSX's system still in operation, even predating the B&O.