The MP15DC, MP15AC, and MP15T were all variants of EMD's final switcher locomotive it manufactured between the mid-1970s and late 1980s.

The MP15 series (originally, the Electro-Motive Division simply called the locomotive an MP15 before the arrival of AC traction motors) replaced the SW1500 model.

Overall it sold relatively well with the three primary differences between the models being that they came equipped with either an alternator (which produced AC power but converted back to direct current), DC traction motors, or turbocharging (which featured an alternator using the same setup as the MP15AC).

The model again saw a slight change to its carbody with a bit more bulk and less beveling.

Today, given their relatively young age, you can still find many MP15 models operating on both large and small railroads.

Additionally, because of their age, none are currently preserved with museums or tourist railroads. However, as the years pass expect this change as there will certainly be at least a few examples preserved. 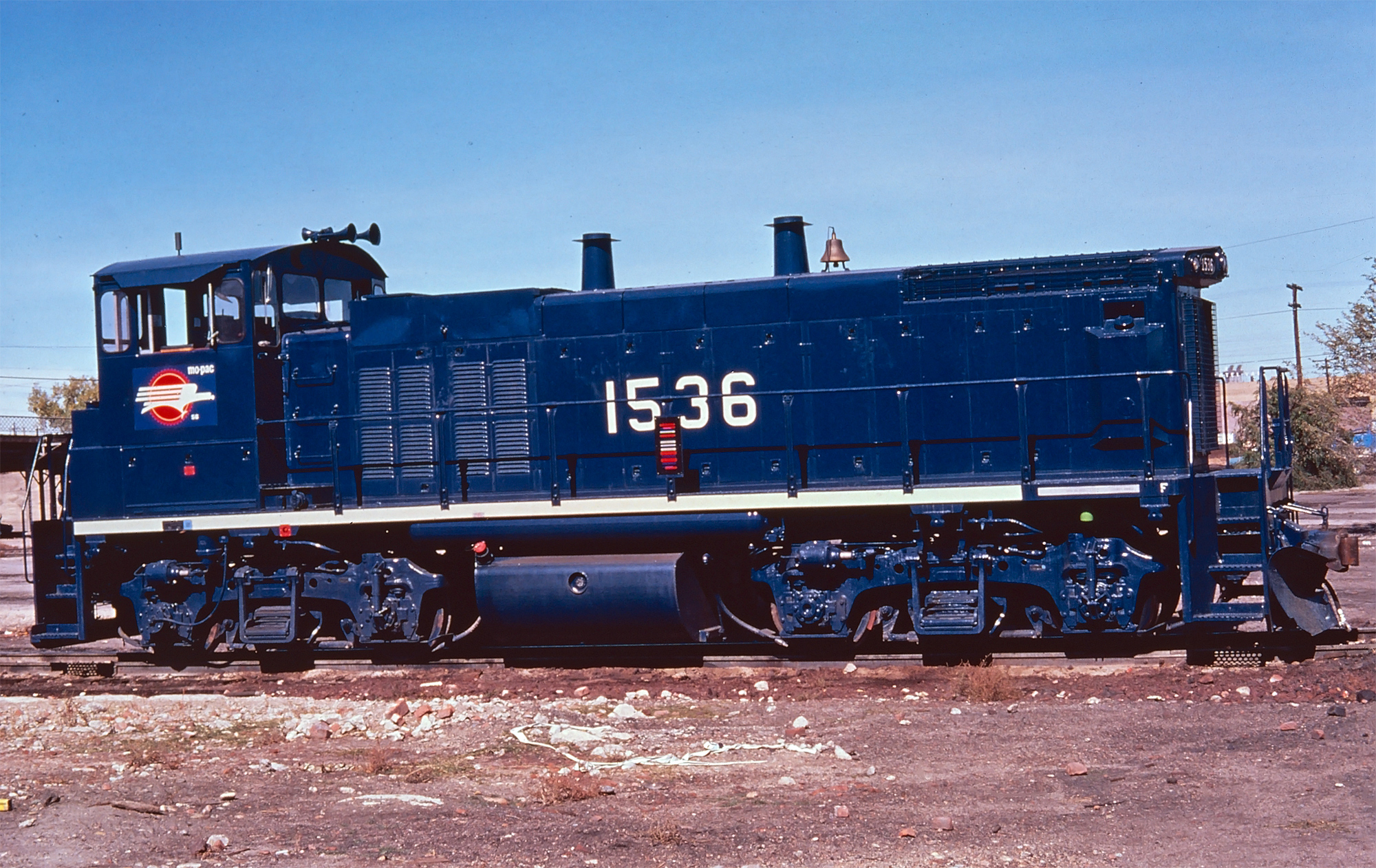 A recently delivered Missouri Pacific MP15DC, #1536, in the fall of 1974. American-Rails.com collection.

Throughout the history of Electro-Motive's switcher line the builder saw successful sales, more than could be said for its road-switchers after the 1980s.

From the earliest SC and NW models to the final series presented here, the manufacturer produced thousands of switchers, many of which remain on Class I rosters for light-duty service.

The MP15DC was the first in the MP15 series of switchers the builder produced (it debuted in early 1974) and interestingly, was meant to not only for yard, industrial, and light branch duties but also as a general road switcher (note the image above of a MP15DC leading a CSX freight).

The MP15 series was meant to replace the successful SW1500 line but retained the 1,500 horsepower rating.

The MP15DC was a bit longer than the earlier SW series at 48-feet and also featured a bulkier and boxier carbody and cab, even more-so than the updated carbodies of the SW1500 and SW1000.

Still, it retained EMD's classic short frame (48 feet, 8 inches) with a slight tapering of the hood near the cab. The EMD MP15DC was built through 1980 and ultimately sold some 351 units, and turned out to be the best selling model of the series.

Of note, EMD actually considered the MP15DC a true road switcher rather than a switcher. While it carried the look of the latter, internally it was indeed a small road switcher that also offered 62,000 pounds of starting tractive effort and 48,800 pounds continuous (using General Motors' D77 traction motors).

The MP15DC was cataloged with a multiple unit (MU) option (allowing more than one unit on the head-end to be controlled from the lead cab) as well as the ability to operate with dynamic brakes (another feature which EMD would install if requested).

Finally, the locomotive also utilized Blomberg trucks as had been featured on the SW1504 variant for Ferrocarriles Nacionales de México, doing away with AAR and Flexicoil trucks used on the SW1500 and earlier models. 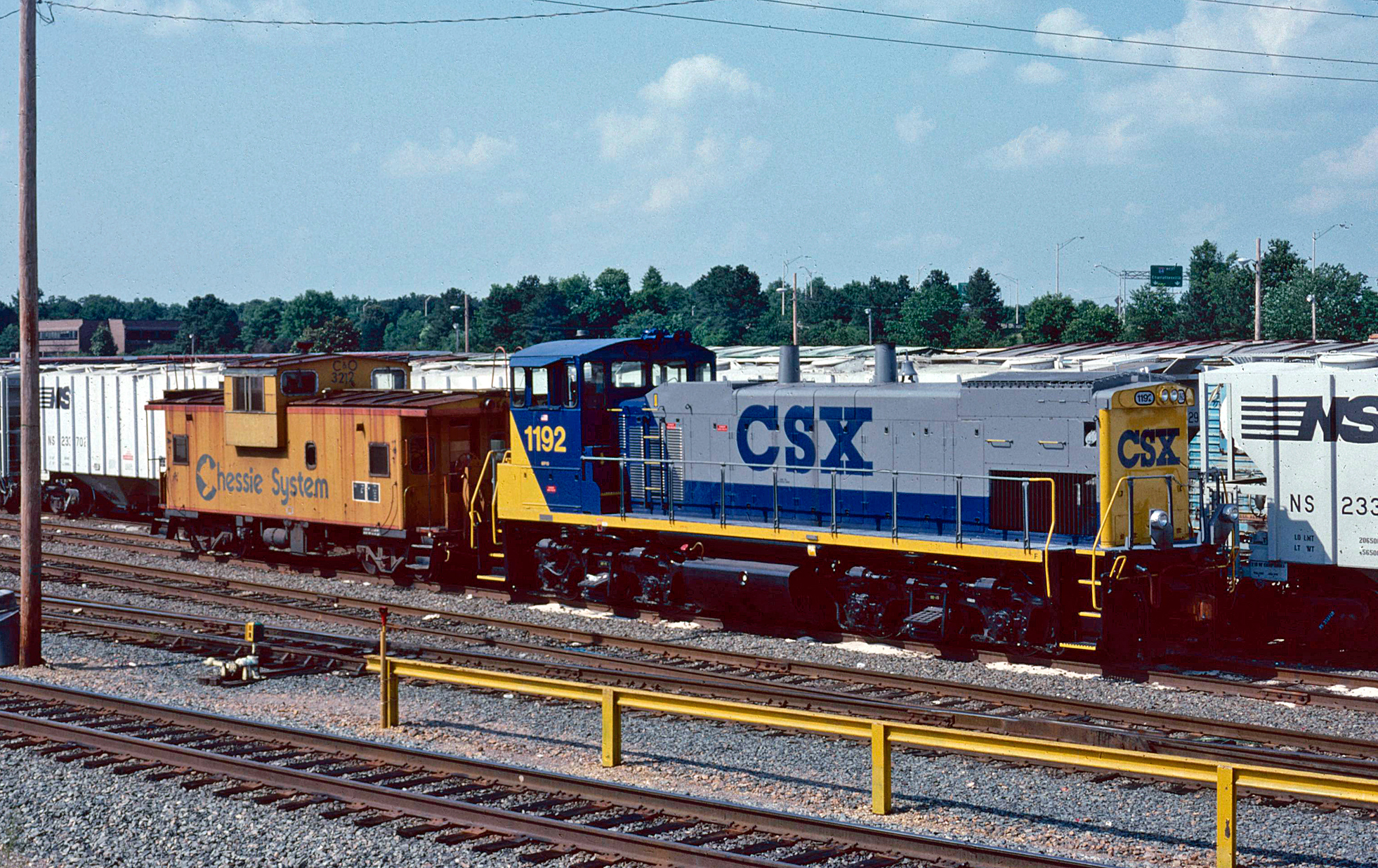 The EMD MP15AC began production in August, 1975 just a year after the MP15DC was released and was meant to be a slight upgrade from the earlier model as its alternating current power was more efficient and allowed it to produce better tractive efforts.

It accomplished its use of "AC" power by using an alternator, which then converted the power back to DC, through the use of a silicon rectifier.

If one keeps a sharp eye the differences between the AC and DC models are noticeable such as the MP15AC's longer carbody (by a little over a foot) and air-intakes along the lower side of the nose.

The EMD MP15AC sold relatively well through the late summer of 1984 with 246 units sold to several different railroads.

The EMD MP15T was essentially a variant of the MP15AC in that it featured a turbocharged prime mover, which was meant to be more fuel efficient (it was also slightly longer than the MP15AC) using only an eight-cylinder version of EMD's 645E prime mover (the other two models featured 12-cylinder 645s).

The model was built between October, 1984 and late fall 1987. Few MP15Ts were ever built, as all but one were manufactured for the Seaboard System, which purchased 42 units.