Mississippi Railroads In "The Magnolia State"

Mississippi defines Southern rail operations at their finest; flat and swampy terrain mixed in with lots of water, coastal operations and port services.

Perhaps no other railroad showcased the Magnolia State like the Illinois Central/Yazoo & Mississippi Valley and Gulf, Mobile & Ohio (Mobile & Ohio), both of which had a significant presence in the state.

Other notables to maintain a presence here included the Southern, Louisville & Nashville, and even the St. Louis-San Francisco ("Frisco").

Today the state is still an important originator of traffic (particularly with chemicals and petroleum given its location along the Gulf Coast) with most movements handled by five of North America's seven Class I railroads, along with one Class II, and a multitude of smaller short lines.

In recent years there have been efforts to revive the former Illinois Central main line between Memphis (Tennessee) and Canton (north of Jackson).

Originally known as the Grenada Railway, the 180-mile corridor was put back in service under Iowa Pacific's Ed Ellis (but owned by the state of Mississippi).

Unfortunately, Ellis's empire collapsed in the late 2010's and in August, 2018 International Rail Partners was named as new operators, forming the Grenada Railroad. 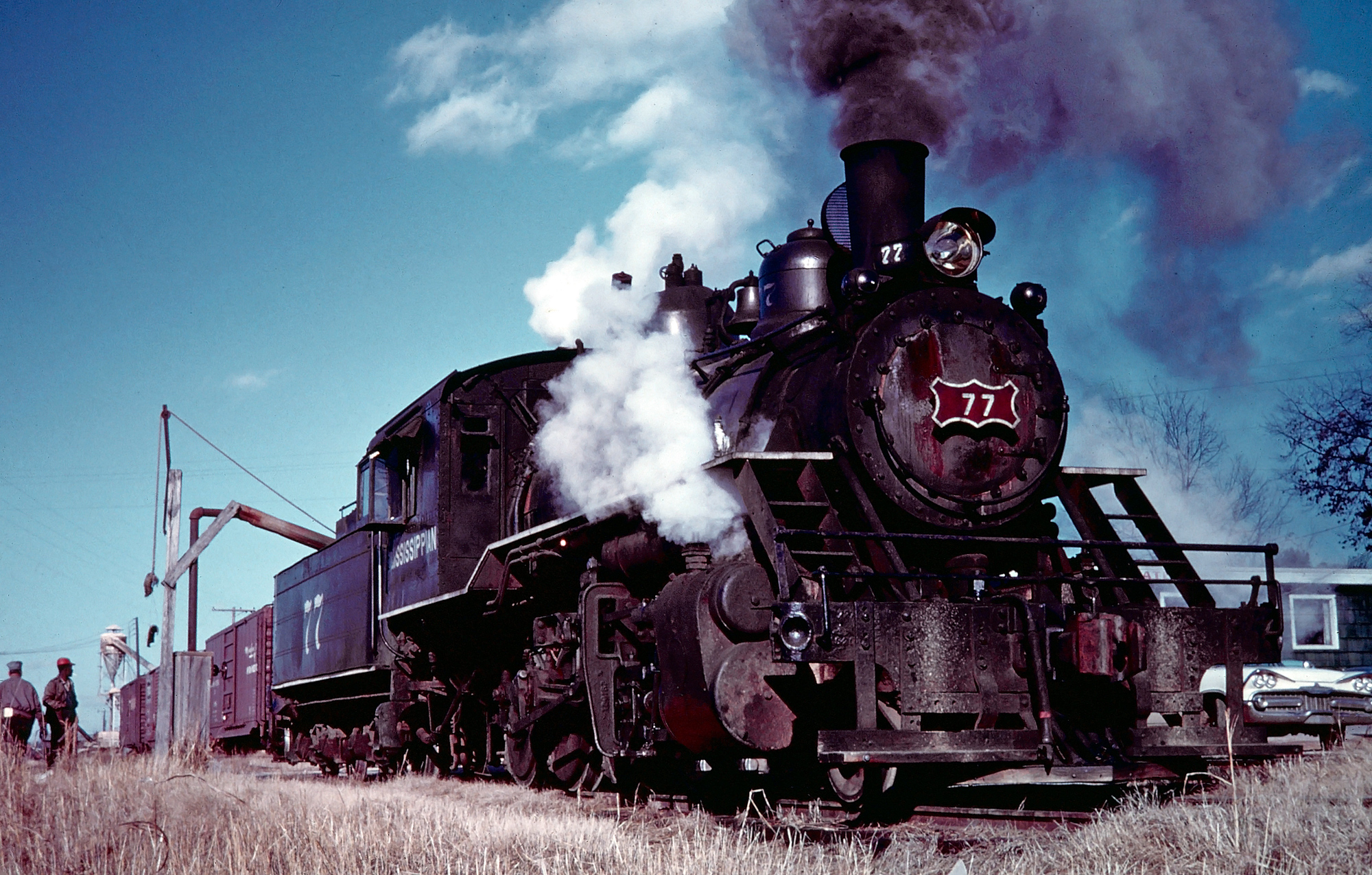 Mississippian Railway 2-8-0 #77 at Fulton, Mississippi, circa 1965. This little short line, dating back to 1923, is still in service today, operating 24 miles from Amory to Fulton, via Smithville. The road gave up steam a few years after this photo was taken but #77 (built as Jonesboro, Lake City & Eastern #41 in 1920 by Baldwin) still survives at the Alberta Prairie Railway (currently out of service). It began life in the timber industry and then later served a bentonite plant in Smithville that opened in 1944. Today it switches an industrial park near Fulton and continues to connect at Amory with BNSF Railway. Fred Byerly photo. American-Rails.com collection.

Mississippi's rail history date back to 1835 when the West Feliciana Railroad began operations hauling the southern staple product of cotton.

By 1842 the railroad had completed its main line between between Bayou Sara, Louisiana and Woodville, Mississippi a distance of 25 miles.

Like other states in the Deep South, Mississippi contained rich, fertile soil ideal for cultivation.  As a result, a multitude of crops continue to be grown here.

This brought the railroad soon after its arrival in the United States as Mississippi boasted its first in 1831 to handle the cotton crop.

Most of this trackage was secondary branch lines although sections of the Gulf, Mobile & Ohio's main line have been removed south of New Albany.

The Illinois Central, which blanketed the state largely through its subsidiary the Yazoo & Mississippi Valley, has been removed in places although its main line to New Orleans remains quite active.

If you are an avid historian you may also be interested in researching the state's logging railroads, which did operate in various areas of Louisiana.

The idea for the West Feliciana, however, dated as far back as 1828 with the railroad being officially chartered in 1831. The line operated independently until it became part of the Yazoo & Mississippi Valley Railroad, which was later controlled by the Illinois Central.

Interestingly, the little railroad lasted 136 years until being mostly abandoned IC in 1978. In terms of where the West Feliciana lay in the IC's system it was located right along the Louisiana/Mississippi border on the southwestern edge of the railroad.

Following the opening of the West Feliciana Railroad, the Magnolia State would find itself home to not only the Illinois Central and Gulf, Mobile & Ohio but also several other now-classic railroads. 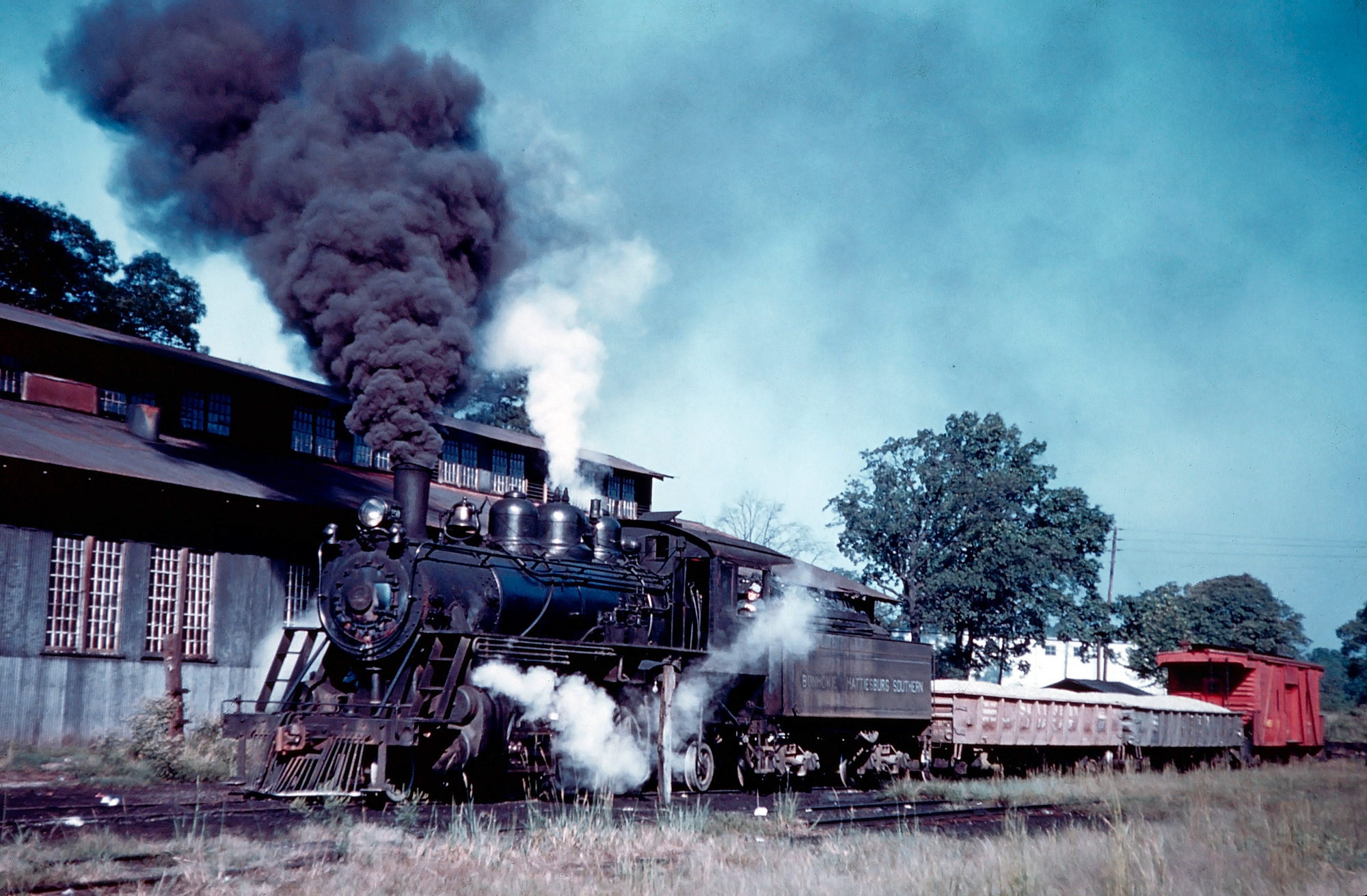 Bonhomie & Hattiesburg Southern 2-6-2 #250 is seen here at work in Hattiesburg, Mississippi, circa 1959. This little short line continued to operate steam until October, 1961. Today, the Prairie is on display at the Edaville Railroad in Massachusetts. Fred Byerly photo. American-Rails.com collection.

Interestingly, today Mississippi is home to nearly as many Class I railroads as during any time in the state's history which include CSX, Norfolk Southern, Canadian National, BNSF Railway and Kansas City Southern Railway.


Altogether, these railroads operate roughly 2,500 miles of track in Mississippi although at one time the state was home to nearly 4,400 miles.

With a loss of about 46% of its rail infrastructure since the "Golden Years" of the 1920s this loss is about average in comparison to the declines other states have witnessed. 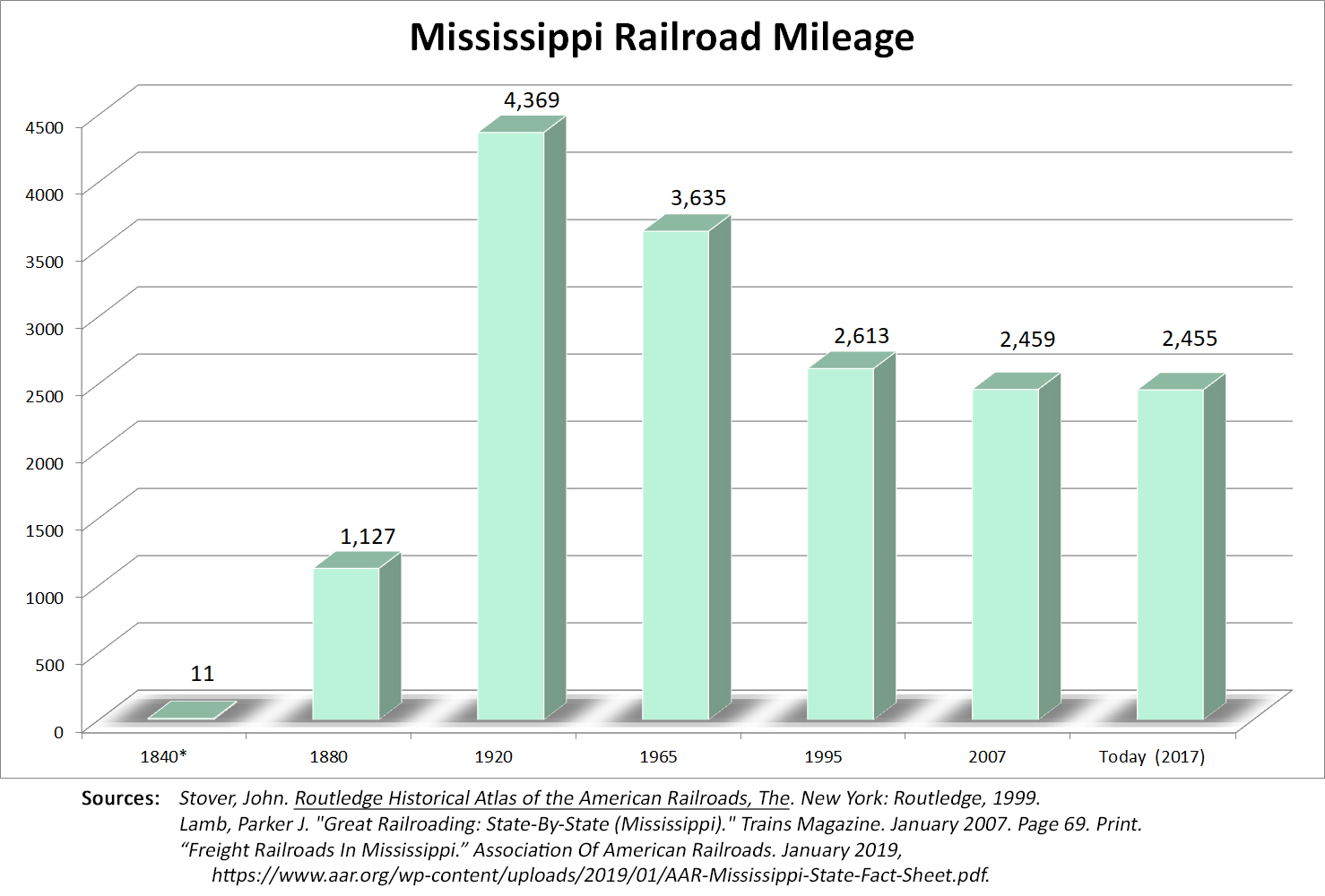 *  Mississippi's first railroad was the West Feliciana Railroad, incorporated in 1831 to handle cotton for the region's local plantations.  It continued to grow during the next few years until reaching Bayou Sara, Louisiana in 1842.

It remained independent for the next four decades until joining the Louisville, New Orleans & Texas in 1889, which was acquired by the Yazoo & Mississippi Valley in 1892 (an Illinois Central subsidiary).

For information about Mississippi railroads in terms of route mileage over the decades please have a look at the chart above. 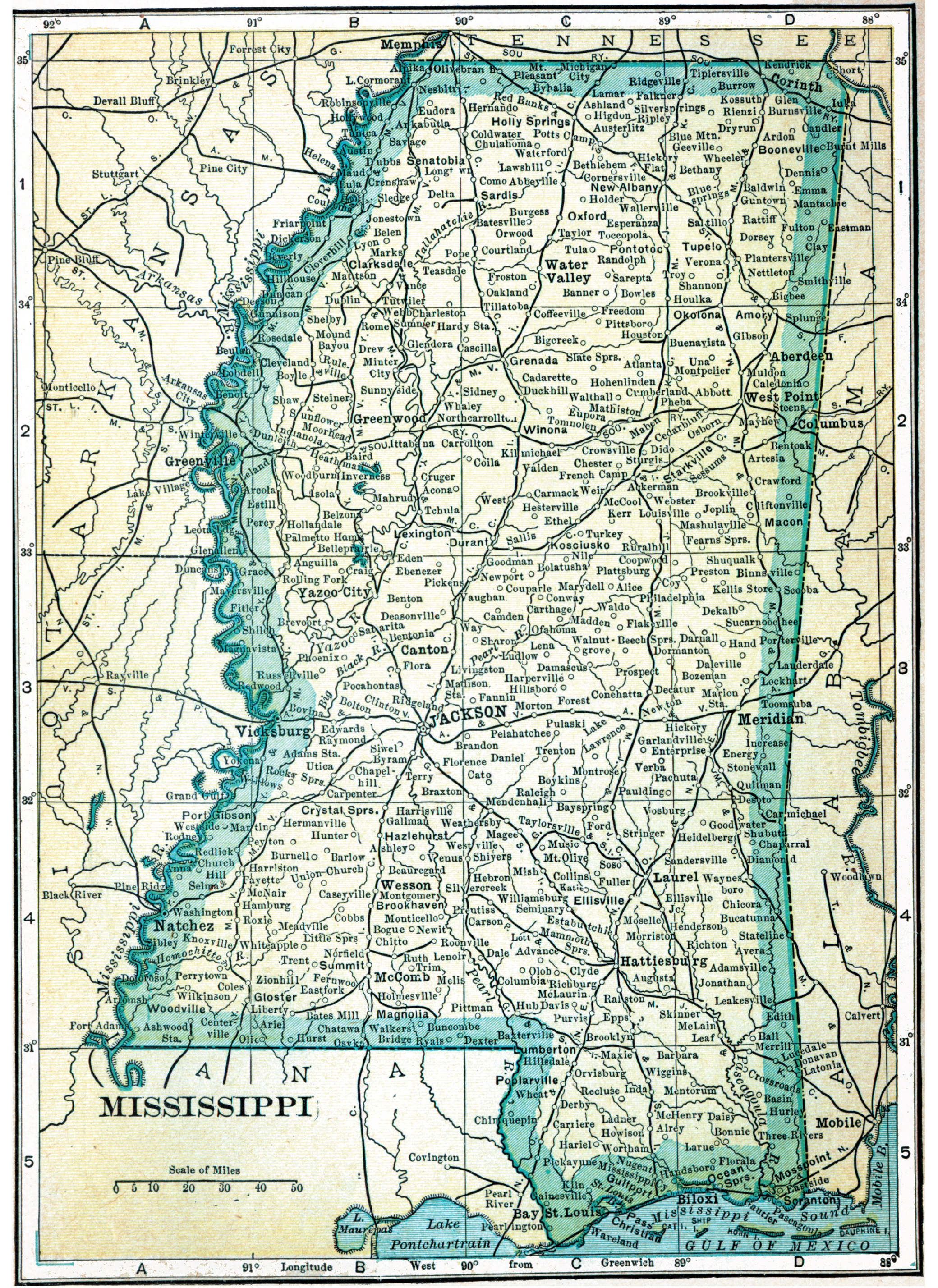 While Mississippi no longer features celebrated passenger trains of the South like the Abraham Lincoln, Crescent, City of New Orleans and Pan American Amtrak continues to operate the Crescent and City of New Orleans over Norfolk Southern and Canadian National trackage in the Magnolia State.

The Sunset Limited used to stretch as far as western Florida and included four stops in Mississippi but has yet to resume service that far east since the Hurricane Katrina catastrophe in 2005.

In any event, if you tire of live freight trains or just aren't interested in that sort of thing Mississippi also includes the following museums:

Unfortunately, at the current time there are no excursion trains or tourist railroads currently operating in Mississippi.

While Mississippi may not offer the excitement of challenging mountainous grades they do feature a colorful mix of most of North America's Class I systems, Amtrak operations and local short line service which should make for an enjoyable trip to the Magnolia State.