Massachusetts is regarded as the birthplace of American railroading when the Granite Railway entered service during the mid-1820's.

Despite ranking 44th in total land area (10,554 square miles) the Bay State was once home to several railroads, thanks its location within the heavily industrialized Northeast.

At its peak there more than than 2,100 miles in service according to the book "The Routledge Historical Atlas Of The American Railroads," by John Stover.

Much of this was the property of the:

Today, fewer than half this mileage is still in service although a number of historical organizations have sprang up to preserve the state's rail heritage.

If you are interested in witnessing the splendid New England countryside by train (including open-air cars), especially during the fall, such opportunities are available in Massachusetts. 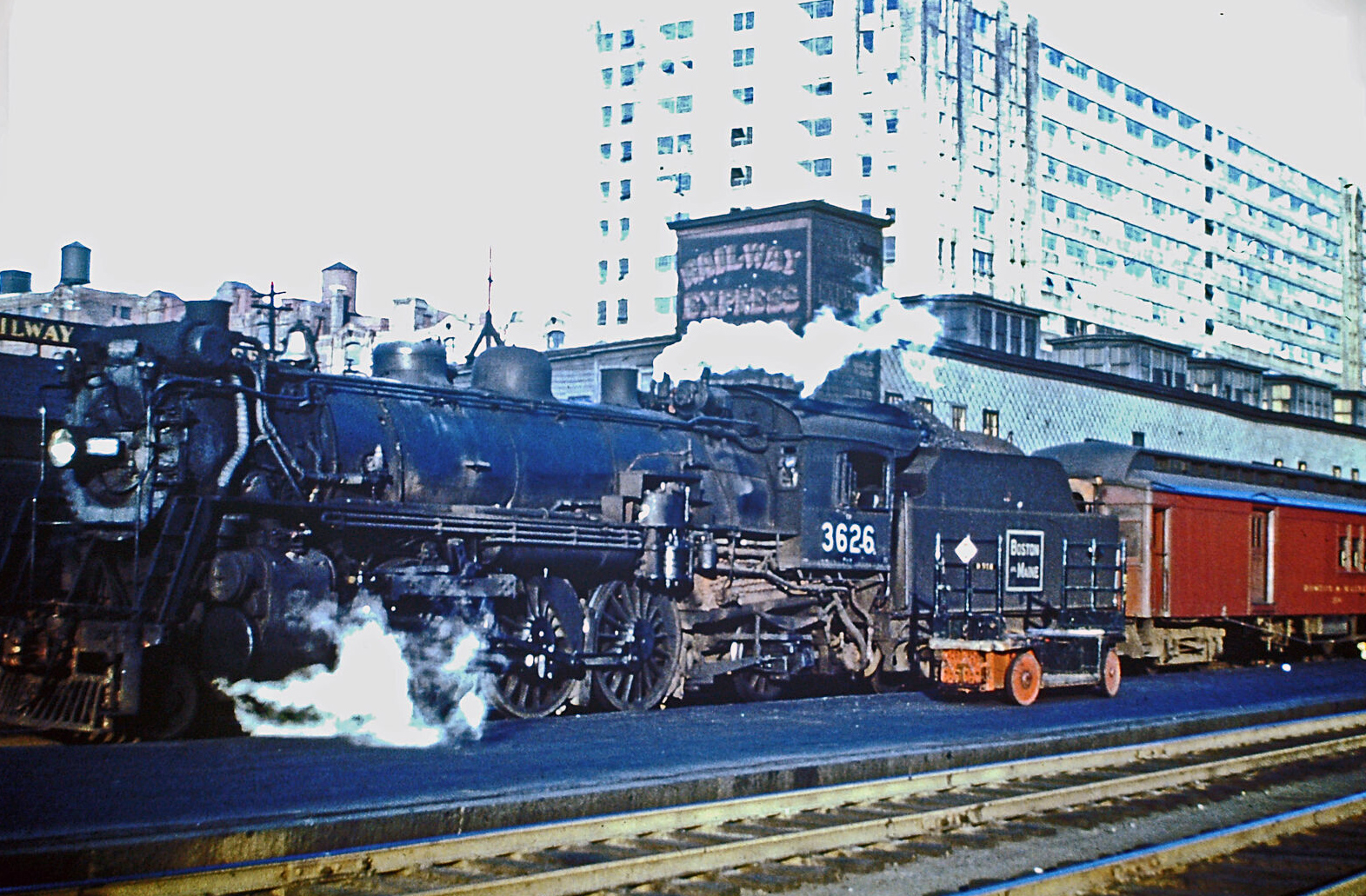 Boston & Maine 4-6-2 #3626 (P-2b), originally manufactured by American Locomotive in 1910 and considerably overhauled in later years (such as the introduction of an Elesco feedwater heater in 1939), is seen here with a passenger train at Boston's North Station in March, 1950.

A Brief History Of Massachusetts Railroads

There were many "firsts" in railroading during the 1820's, ranging from the first chartered common-carrier (Baltimore & Ohio) to the first regularly schedule passenger train pulled by a steam locomotive (the Best Friend of Charleston, owned by South Carolina Canal and Rail Road).

Technically, the first railroad ever chartered in America was the New Jersey Railroad Company of 1815 by Colonel John Stevens. However, construction was never launched until 1832.

As such, the distinction of the first railroad chartered, built, and operated was the Granite Railway Company established on March 4, 1826.

It was created to more easily transport granite between Quincy and the Neponset River at Milton.  The rock was used in the Bunker Hill Monument's construction, an endeavor finally dedicated several years later on June 17, 1843.

In a curious twist of fate, moving granite became so profitable the railroad remained open for many years.  The Granite Railway's creation was thanks to Colonel Thomas Handasyd Perkins, along with the state's cooperation.

The railroad was just 3 miles in length and, interestingly, no thought was given to utilizing steam locomotives at the time.  Instead, horses were used to pull cartloads of granite.

According to the January, 2007 issue of Trains Magazine's which featured a nearly cover-to-cover subject on all 50 states entitled, "Great Railroading: State-By-State," the Granite Railway opened for business, officially, on October 7, 1826.

Despite the lack of steam power the system did use the preferred method of strap iron rails; wooden planks with thin straps of iron placed atop them.

The gauge was set to around 6 feet, wide by today's standards (4 feet, 8 1/2 inches) although during that era nearly everything about railroading was an experiment.

The company remained independent until it was acquired by the Old Colony & Newport Railway, after which time the horses were dropped in favor of locomotives.

Over time, the Old Colony Railroad updated the right-of-way with traditional iron "T"-rails and wooden ties and set the gauge to 4 feet, 8 1/2 inches.

In 1893 the Old Colony was acquired by the growing New Haven Railroad, which shortly thereafter abandoned the Granite Railway.

While all four Massachusetts scenic train rides are worth checking out, two truly stand out; the Berkshire Scenic Railway Museum and Cape Cod Central Railroad.

The Berkshire Scenic uses a short stretch of track in the southwestern corner of the state offering guests three types of excursions between May and October.

While the museum does not host steam locomotives their special trips throughout the year including wine tasting, holiday trains, and hosting the Polar Express during the Christmas season using restored heavyweight passenger cars.

As for the Cape Cod Central, they operate quite elegant excursion trains way out along the eastern tip of the state near Hyannis, running along the Atlantic shore line.

Also, if you are interested in Massachusetts train rides that pertain to specific events, such as "The Polar Express," Halloween, Thomas the Tank Engine excursions, or fall foliage events please visit the main tourist trains section of this website.

One of New England's most popular excursions is the Berkshire Scenic Railway Museum, located in Lenox (where the depot here, completed in 1903, has been lovingly restored).

This all-volunteer organization has been in service since 1984 and until 2011 used the tracks of freight carrier Housatonic Railroad between Lee (Interestingly, the depot in Lee, completed in 1893, is restored but not utilized by the Berkshire Scenic.) and Great Barrington.

- The Housatonic's history can be traced back to 1840 but was largely owned and operated by the classic New York, New Haven & Hartford since 1898.

The current Housatonic Railroad was chartered in 1983 by John Hanlon, Jr. to lease 34 miles from Connecticut from New Milford north to Canaan, Connecticut.  It later expanded into Massachusetts in the early 1990s. -

However, in 2011 the short line no longer wanted excursions operating over its rails.  Five years passed before an agreement was worked out with North Adams to have trains hosted from that town.

Trips began in 2016 and, today, run as far as nearby Adams.  The museum's operating season lasts from May through October while they also host special events at various times throughout the year. 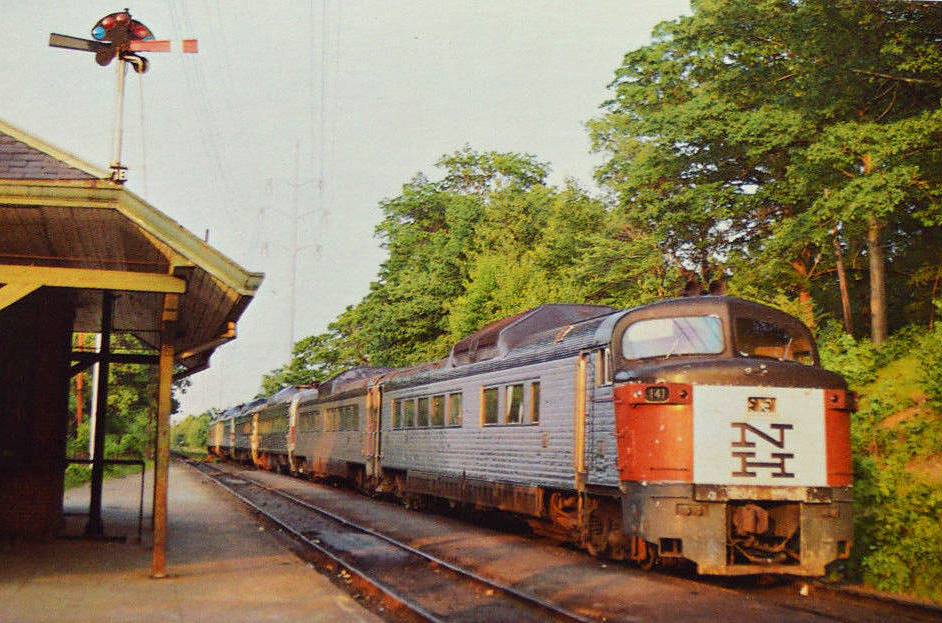 This museum is located inside the beautifully restored wooden depot that opened in 1887 by the New York, New Haven & Hartford.

By the 1950's the railroad, which then offered the only direct service between Boston and New York, was struggling to avoid bankruptcy.

It relied predominantly on passenger and commuter traffic, business which became increasingly less profitable as the 20th century progressed due to increased competition and rising costs.

At its peak the New Haven maintained a network serving Connecticut, Massachusetts, Rhode Island, and parts of New York.

The railroad's situation continued to decline throughout the 1960's and it eventually wound up in the ill-fated Penn Central Transportation Company.

In 1960 the Chatham depot became today's Chatham Railroad Museum.  Inside they feature a large collection of historic displays as well as a restored wooden caboose in front of the building.  The museum is open from mid-June through mid-September.

The Cape Cod Central Railroad is a very popular tourist attraction due not only to the great scenery but also its many different dinner trains and specials.

However, this was not always the case. After Conrail took over operations from Penn Central in 1976, much of the rail property along Cape Cod was purchased by the State of Massachusetts with freight service maintained by short line Bay Colony Railroad since 1982.

That same year the Cape Cod & Hyannis Railroad launched a tourist attraction to give visitors a chance to view the spectacular coastal scenery by rail. However, it fell through 1988. 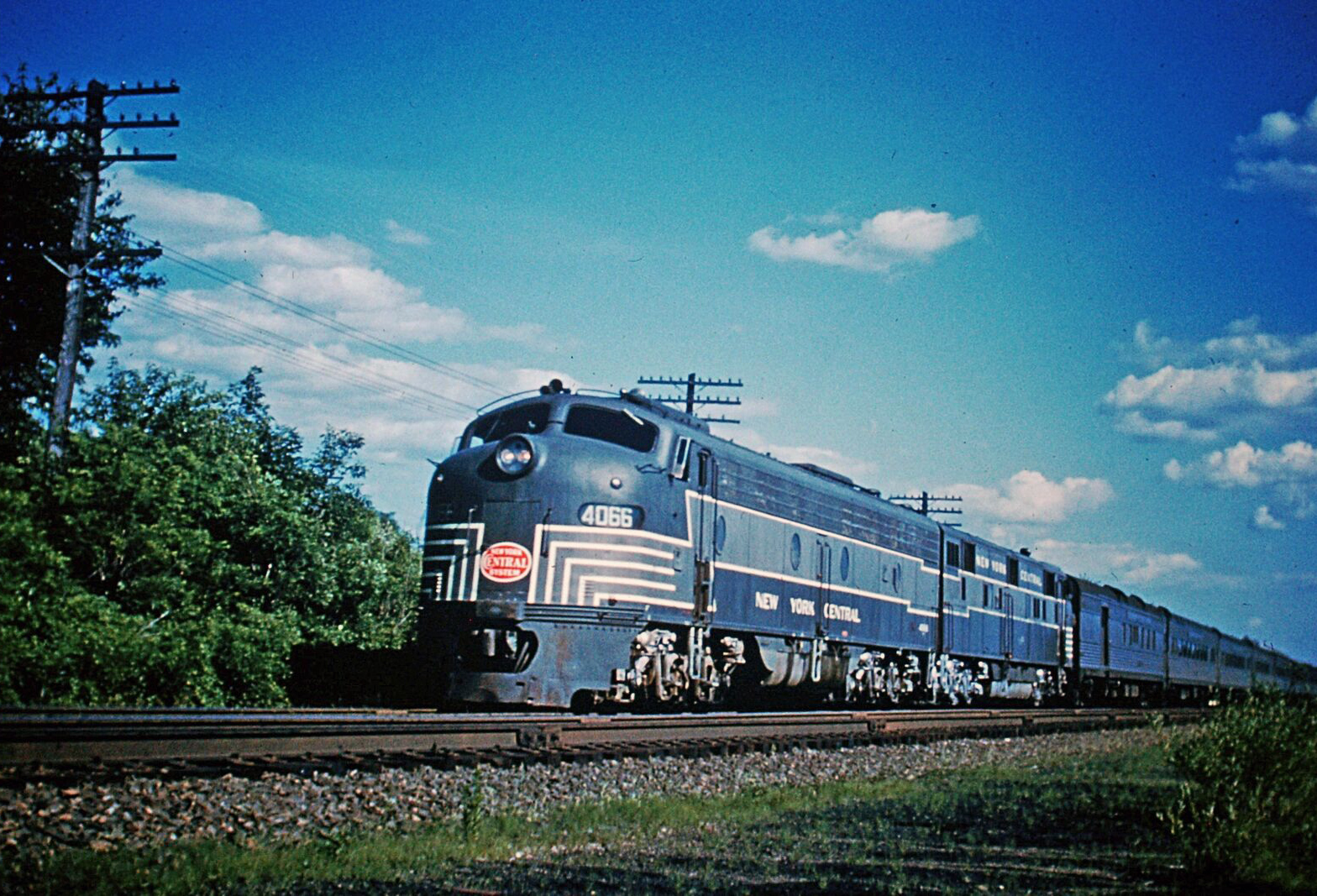 New York Central's train #28, the eastbound "New England States," hustles through Springfield, Massachusetts at around 8 AM on July 18, 1956.

The popular, steam-powered Edaville Railroad, based in Carver, Massachusetts, is part of an entire park system.  Its railroads run on 30-inch and 2-foot gauge track, offering scenic train rides around the grounds.

Highlights during the year include "A Day Out With Thomas" the tank engine, Curious George, Clifford, and other seasonal specials.

This particular attraction is the only location in Massachusetts that maintains historic steam locomotives.

Although not all units are operational their fleet includes:

The park is traditionally open from April through year's end.  To learn more about their schedule and all attractions please visit their website.

This park, which first opened in 1978 (currently maintained by the National Park Service) is located in Lowell, with a primary purpose of highlighting the town's textile and manufacturing history.

At one time, both industries were prolific throughout New England and provide several railroads (all mentioned above) with considerable business.

After World War II, however, this once lucrative industry slowly disappeared.  Today, several of the historic mills and other buildings are restored.  These include the:


Additionally, be sure to check out the trolley rides offered on the premises. 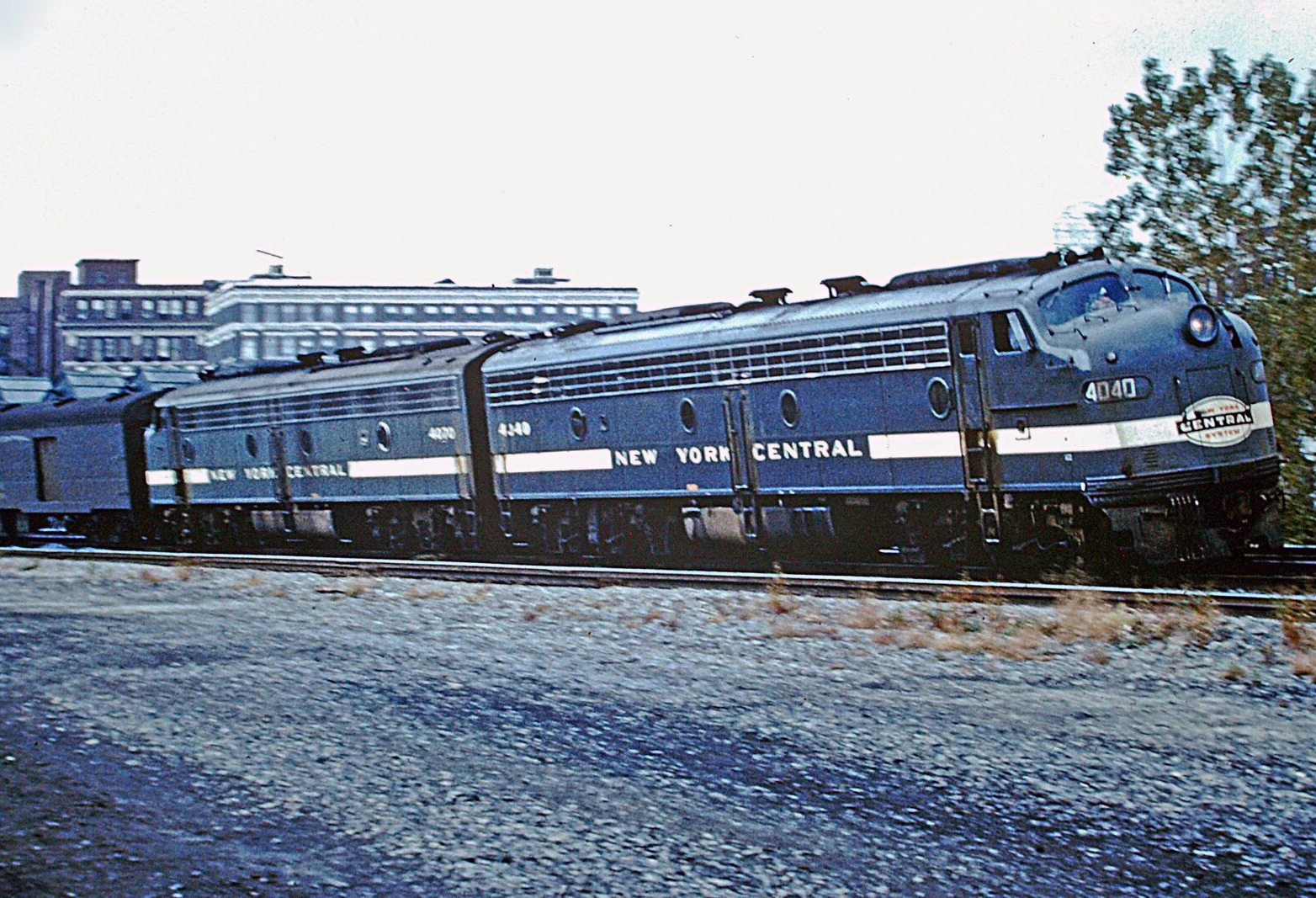 It is the early Penn Central era as a pair of former New York Central E8A's appear to be coming off the New York, New Haven & Hartford and onto the Boston Albany at Framingham, Massachusetts on June 8, 1969.

The SF&CS was a small, rural electrified streetcar system that served Buckland, Shelburne and Colrain; it opened in 1896 and remained in use until 1927.

According to Dr. George Hilton and John Due's authoritative piece, "The Electric Interurban Railways In America," the state of Massachusetts enjoyed the densest coverage, per capita, of electrified interurbans and streetcars in the country.

At its peak it contained some 3,056 miles (1917), earning it the distinction as the only state to have more electrified railroads than traditional, steam-powered lines.

Much of this trackage was concentrated around Boston and, unfortunately, suffered tremendously under the early automobile and onset of the Great Depression.

While some Boston trackage survived much of this network was abandoned by the early 1930's.

This interesting museum, located in Beverly, has a large collection of photos, books, and artifacts that are transportation related in general ranging from aircraft to streetcars and trains.  They are normally open during Wednesdays of every week.