All of Montana's logging railroads were based in the state's western mountains were forests were thick with most centered around Glacier National Park in the northwestern region.

A few can be traced to the turn of the 20th century while most, according to Kramer Adams' book, "Logging Railroads Of The West," sprang up around World War I.

Alas, operations were short-lived as within 20 nears most were gone with only a few surviving beyond the end of World II.

For outside connections these railroads often relied on the big three transcontinental railroads serving Montana; Great Northern, Northern Pacific, and the Milwaukee Road.

The Montana contained thick stands of Douglas Fir, Western Larch, Ponderosa Pine, Western Red Cedar, Engelmann Spruce, and a variety of other evergreens which generally grew up to 7,000 feet above sea-level.

However, the state's logging industry did not really flourish until the arrival of railroads well after the completion of the original Transcontinental Railroad in May of 1869 by Union Pacific and Central Pacific in Utah.

The state's first system was the Utah & Northern Railway, which reached Butte via Utah in 1881.

Soon after the Northern Pacific arrived in Montana and had opened the first route to the Pacific Northwest by 1883, followed by the Great Northern in 1893, and Milwaukee Road (Chicago, Milwaukee, St. Paul & Pacific) in 1909. 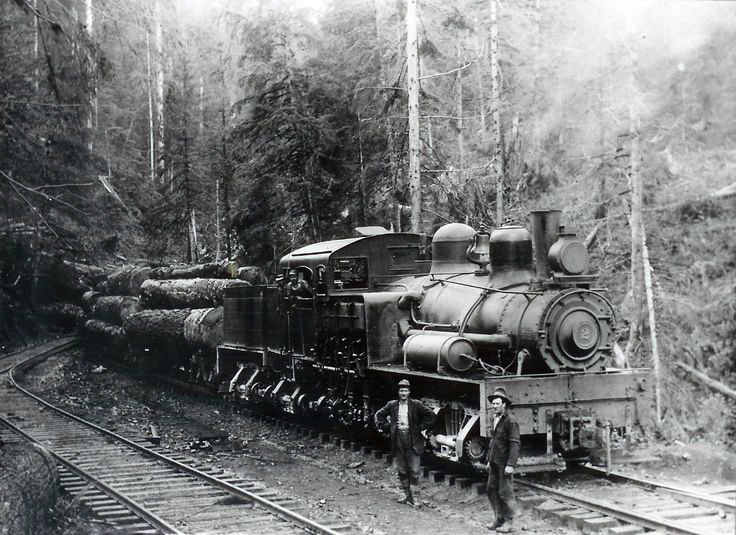 The completion of the Northwest's three major railroads was a great boon to the region's timber industry, which blossomed at the turn of the 20th century and aided in part by the development of geared locomotives such as the Shay, Climax, and Heisler.

These designs could move heavy loads up steep grades on shoddy or hastily built track and rights-of-way, making them ideal for logging operations.

The logging railroads listed here are thanks in large part to Mr. Adams' authoritative book, which painstakingly detailed them on a state-by-state basis across the West.

A.O. Westburg Lumber Company:  A small company with just 3 miles of track to serve its mill at Columbia Falls along with 1 standard locomotive.  It began around 1915 and rail service ceased in 1932.

American Timber Company:  This logger was based near Dayton and owned 10 miles of track during peak years of service with 1 geared locomotive.  It remained in use from 1938-1940, possibly a successor to an earlier operation.

Anaconda Copper Mining Company:  More well-known for its private (electrified) railroad that handled copper ore and concentrates near Bonner it also once shipped timber products as well owning 35 miles of track and 8 geared locomotives from 1904-1949.

Burlington Lumber Company:  A relatively small logging operation based near Libby it laid down 6 miles of track  and is only known to have initiated service circa 1912.

Brooks-Scanlon Lumber Company:  This operation began as the P.L. Howe Lumber Mills near Eureka in 1919 with 12 miles of track and 1 locomotive.

P.L. Howe later became the Brooks-Scanlon Lumber Company in 1922 with 9 miles and 2 geared locomotives in use.  Railroad operations ceased in 1926.

Casey Mining & Equipment Company:   Little is known about this company's logging railroad.  It was located near Helena and owned 8 miles of track.  Service is believed to have been suspended in 1951.

Columbia Lumber Company:   This timber company had a mill near Columbia Falls and its small railroad operated just 1 mile of track, commencing service circa 1917. 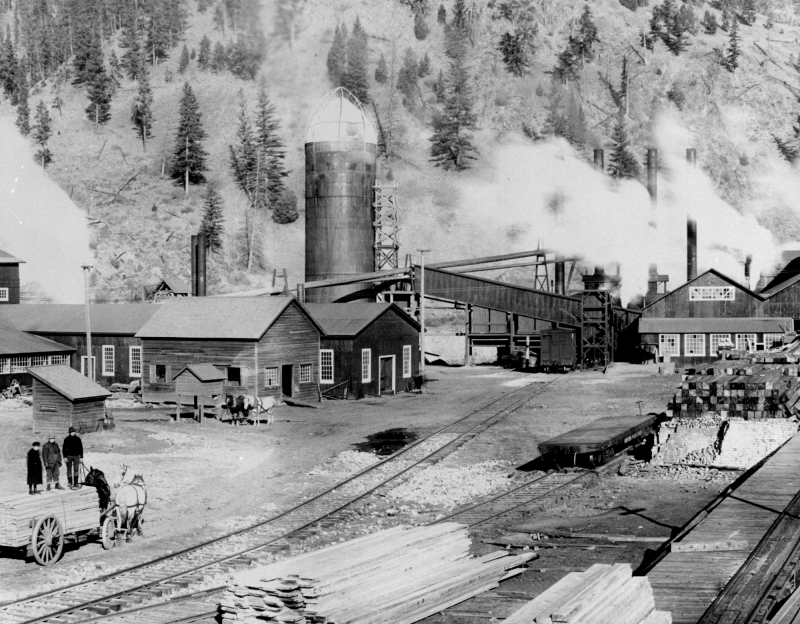 Donian Company:  Based near the Arlee area this company owned 10 miles of railroad with 2 geared locomotives.  It was in service from 1920-1928.

E. O. Everson Lumber Company:   This company had a mill near Victor with 5 miles of track in service.  It is known to have operated from 1940-1947.

Empire Lumber Company:   This logger was located at Kalispell and is only known to have operated 3 miles of track between 1926-1930.

Enterprise Lumber Company:   This company was also based near Kalispell and is only known to have operated 2 miles of track circa 1913.

Harper Logging Company:   This logger was located at Victor with 12 miles in service and a single geared locomotive remaining in use from 1927 until 1938.

Hans Larson Lumber Company:   This company was based at Dayton operating 6 miles of track and 1 locomotive circa 1934.

Hutchinson Brothers Lumber Company:   With a mill based at Whitefish this private operation had a small 2-mile railroad with 1 standard locomotive and was in service from 1909-1928.

Isaacs Lumber & Lath Company:   Another logger based near Kalispell.  Its history is largely unknown other than the company operating between 1928-1929.

Jessup Milling Company:  Located near Jessup this company had 2 miles of track and is known to have operated from 1911-1917.

Livingston & Cottrell Lumber Company:   This company had a small operation near Plains with 14 miles of track in service.  Its only known years of service were from 1938 until 1939.

Mann Lumber Company:   This timber operation was based at DeBorgia utilizing 11 miles of track along with 1 geared and 1 standard locomotive.  It is known to have been in service from 1908-1925.

Montana Logging Company:   This operation was based in the St. Regis area with 15 miles of track and 2 geared locomotives.  It remained in use from 1918-1943.

J. Neils Lumber Company:   This operation originally began as the Dawson Lumber Company in 1910.  At that time it utilized 8 miles of track and 1 geared locomotive.

In 1911 it was renamed as the Libby Lumber Company, a division of the Chevlin-Hixon Company, and had laid down 23 miles with 4 geared locomotives.

In 1918 the operation again changed hands as the J. Neils Lumber Company with 25 miles and the same roster of locomotives.  Rail service survived until 1956.

Polleys Lumber Company:   This company was located near Ronan with 11 miles of track and 2 geared locomotives.  The railroad remained in service from 1911-1934.

Pyfer's Sawmill:   There is little known about this operation but it was based at Whitehall and utilized a 15-mile railroad.  It is believed that service was suspended circa 1951.

Sage Lumber Company:   This company was located at Twin Bridges and owned just a 1-mile railroad, operating between 1950-1959.

Sandpoint Lumber & Pole Company:   There is only scant information about this timber operation which was located at Troy and owned 1 geared locomotive.  The railroad is known to have operated from 1922 until around 1927.

Sommers Lumber Company:   As its name suggests this company was locate at Sommers and owned a rather substantial private railroad of 47 miles during peak years of service.

Its roster included 1 geared and 1 standard locomotive.  Rail service took place from 1914-1942.  In addition, the company owned a subsidiary, the John O'Brien Lumber Company also based near Sommers with 12 miles of  track operating from 1901 until circa 1910.

Tuscor Lumber Company:  Not much is known about this operation but it was located at Trout Creek and owned 1 geared locomotive.  Service is believed to have started in 1917 and lasted until only 1918.

Rail service commenced in 1910 and at its peak had 18 miles in service with 3 geared locomotives.  In 1924 it became the Warland Lumber Company with the same roster and 20 miles in service.  Rail operations ceased in 1927.

W.N. Womack Lumber Company:  There is not much known about this operation but it owned a 4-mile railroad to serve a mill at West Yellowstone.  Rail service is known to have taken place between only 1938-1940. 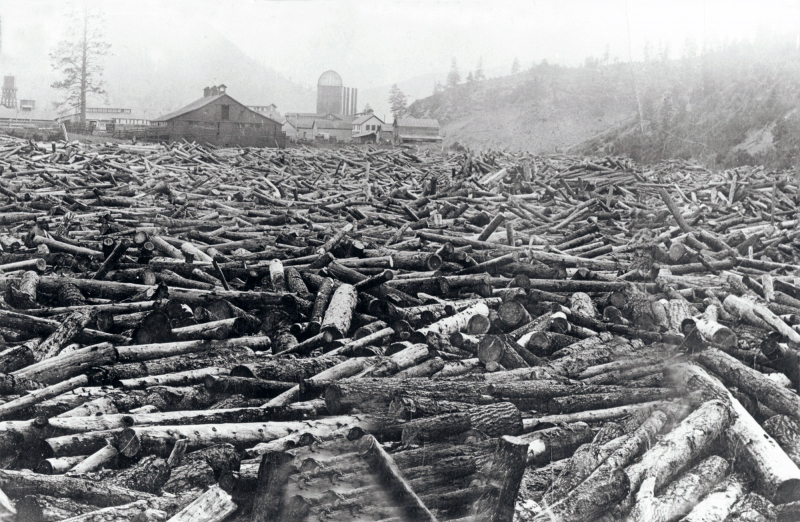 White Sulphur Springs & Yellowstone Park Railway: This was the only railroad to handle timber products within Montana to survive beyond 1960.

It began service in 1910 and eventually came to operate a 27-mile system connecting White Sulphur Springs with Ringling where it connected with the Milwaukee Road's transcontinental main line.

The Milwaukee eventually acquired ownership of the property which had two locomotives, 2-6-2 #18 and 4-4-0 #99.  Into the diesel era Milwaukee power was used to service the branch.

As the large railroad wound down its operations in the west it abandoned the WSS&YR in 1975 but it was reactivated a year later and came under control of the King Wilson & Rockland Oil Company, which offered excursions on the line.

Finally, all operations ceased in June of 1980, just a few months following Milwaukee's closure of its main line.