The B&O's Mount Royal Station was built to coincide with the railroad's Baltimore Belt Railroad electrification project in Baltimore.

This project made operations more efficient in the city and decreased pollution by removing all steam locomotives from city limits.

Mount Royal was built on the north end of the Howard Street Tunnel project and the structure remained an important terminal to the B&O for nearly seven decades, being one of two primary passenger stations the railroad used in the city.

However, trains have stopped calling at this beautiful building more than 50 years ago now, although thankfully it remains one of Baltimore's noted historic structures.

Today, Mount Royal Stations is home of the Maryland Institute College of Art (MICA) which as taken great lengths to not only preserve the building but also retain as much of its original railroad appearance as possible. 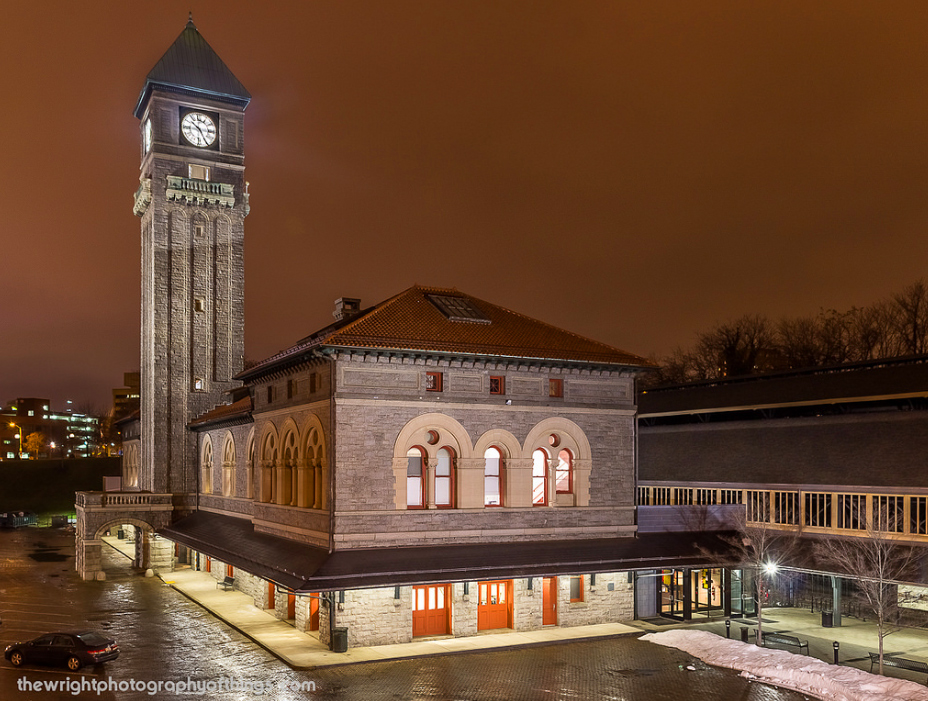 A present-day view of Mount Royal Station as the building appeared on the evening of February 8, 2016. Today it is home to the Maryland Institute College of Art. Jon Wright photo.

The history of Mount Royal Station is intertwined with another important project the B&O was constructing at the same time, its electrified Baltimore Belt Railroad.

The completion of this new line not only alleviated a bottleneck the company had to endure for years by using car ferries but also enabled the B&O to comply with a city ordinance of no steam locomotives operating within city limits.

By the late 19th century many large cities had banned the use of steam locomotives due not only to the poor quality but also because of the safety issue in the event of a boiler explosion or wreck.

The new electrified route, capped off by the massive 1.5-mile tunnel underneath the city, opened on May 1, 1895 the first such route in the country. 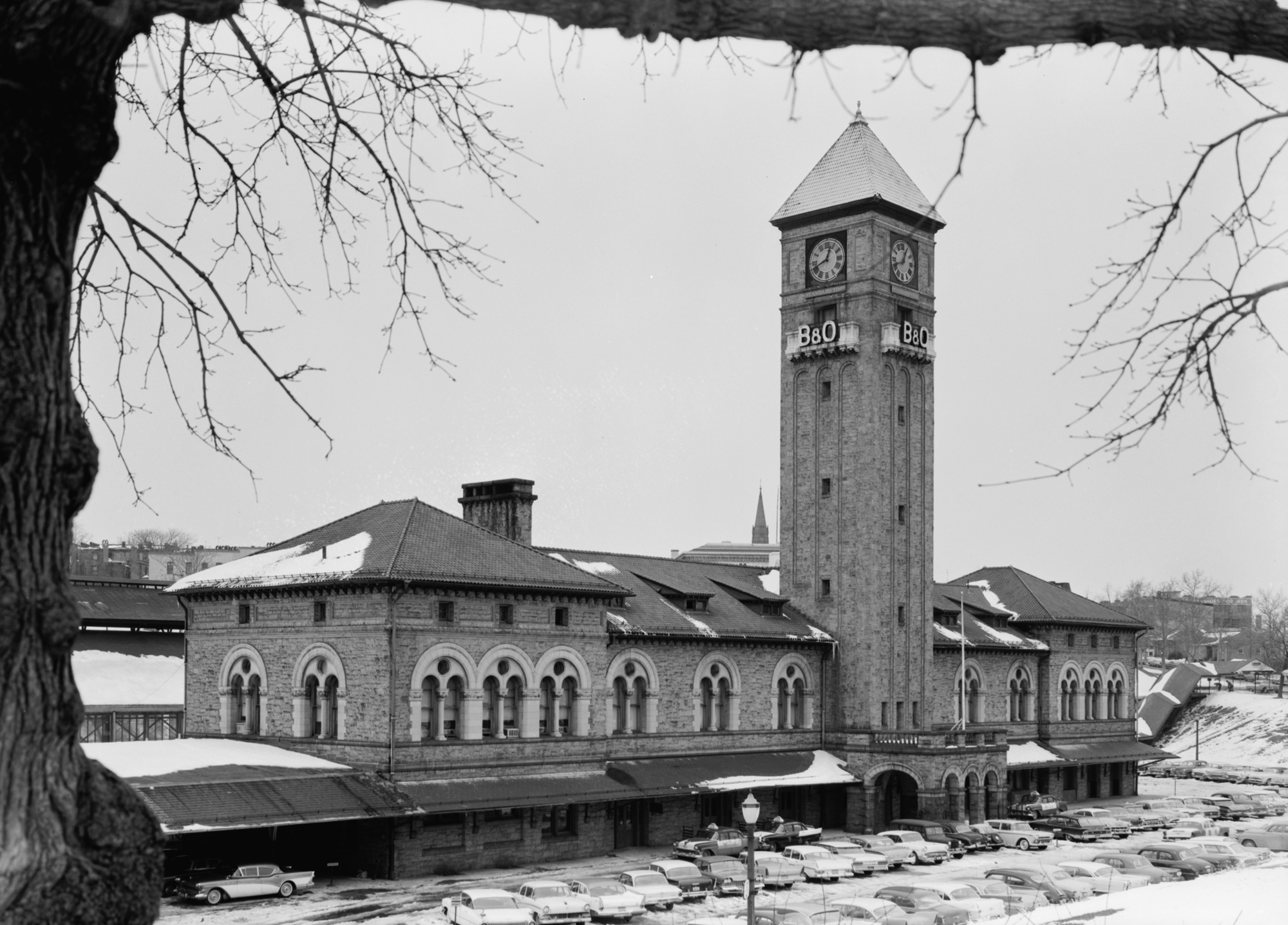 While this project was ongoing the railroad also had plans to open a new station to serve the electrified line.

The B&O already had another station in use at the time, Camden Station near its massive Camden Yards classification facility (now home of the Baltimore Orioles ballpark).

The point of the new station, located to the north of downtown along its Baltimore-New York main line was to serve this route as the railroad attempted to compete in the market with the likes of the Pennsylvania Railroad.

To do so the B&O operated its famed Royal Blue passenger train launching the train just after its electrified Baltimore Belt Railroad opened, on June 27, 1895. 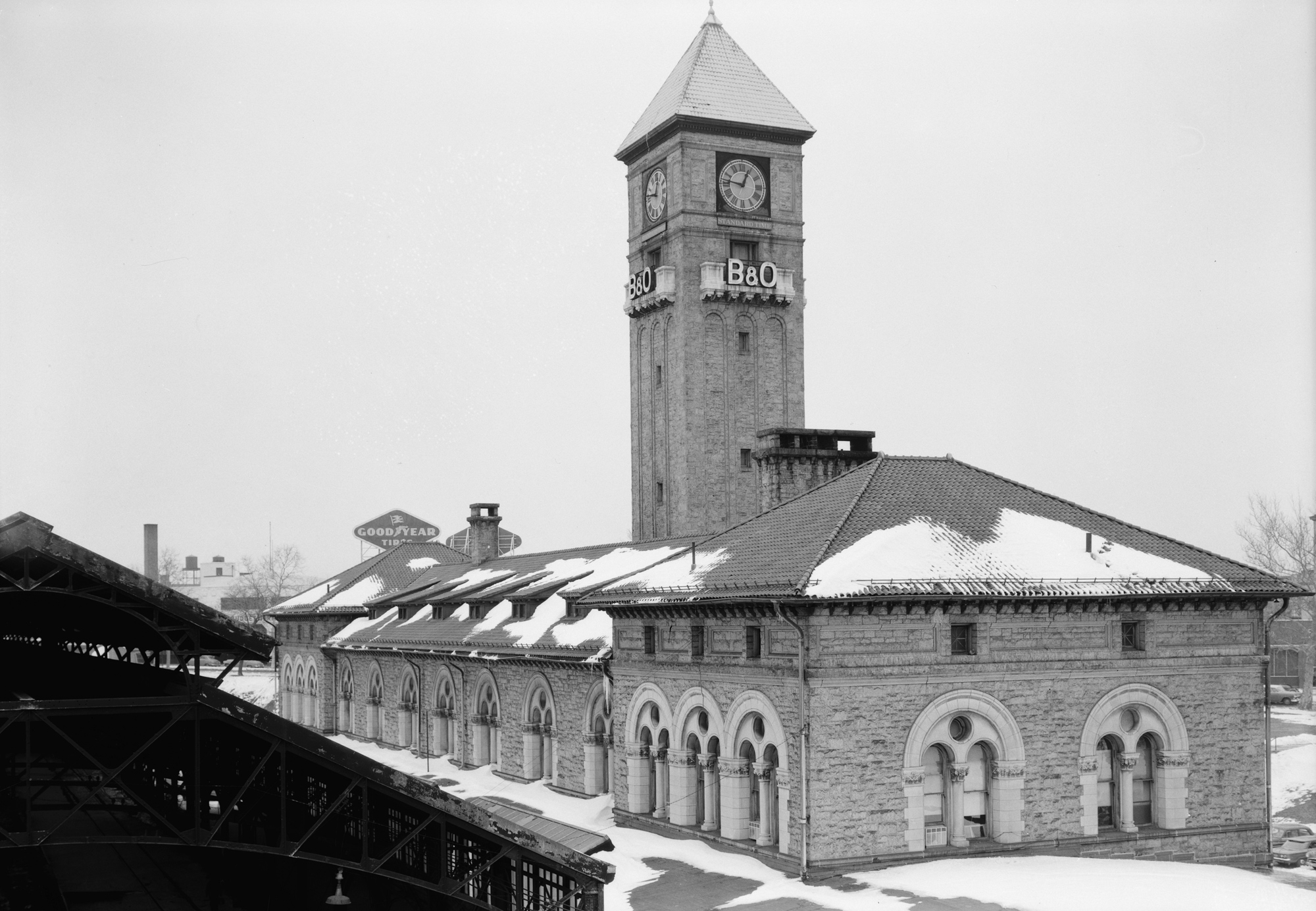 However, the train, and its passengers, would have a splendid station to arrive and depart from for another year.

Famed architect E. Francis Baldwin, of whom the B&O commissioned many times to design and build a number of stations for them, both large and small, was tapped to oversee the construction of Mount Royal Station.

Completed in 1896, Mount Royal was a beautiful structure that featured a clock tower, marble interior, and long train shed that has trains enter under it as soon as they exit the Howard Street Tunnel.

It was the first terminal to ever host electrified trains when it opened that year. The structure's clock tower stood 150 feet from the ground and the entire building used a mix of local granite as well as Indiana limestone.

Baldwin designed the terminal using Romanesque and Renaissance architecture, capping off the station with a striking red-tile roof. 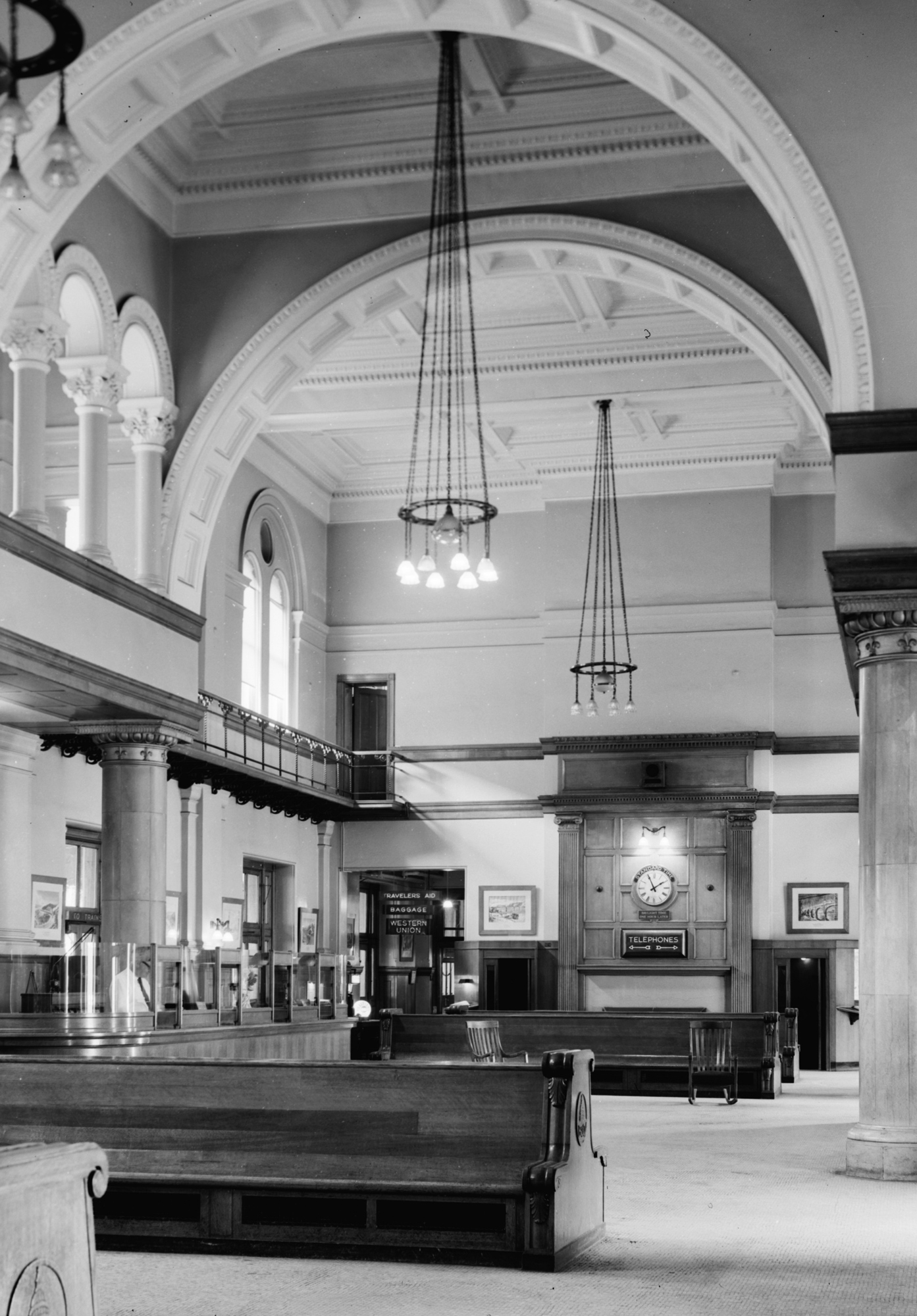 A view of Mt. Royal Station's main waiting room as it appeared during September of 1958. Lanny Miyamoto photo.

With a splendid entrance into Baltimore now available to passengers, the B&O did its best to stay competitive in the New York-Baltimore/D.C. market with the Pennsy.

Unfortunately, because the railroad did not have direct access into downtown Manhattan its ability to effectively compete with the PRR yielded a B&O a handicap it could never, truly overcome.

Despite this the company did its best to provide exemplary service aboard the Royal Blue, which it did achieve, so much so that the railroad had a large contingent of passengers that rode the train simply for this reason (despite the fact that they had to take a ferry from Jersey City Terminal into Manhattan). 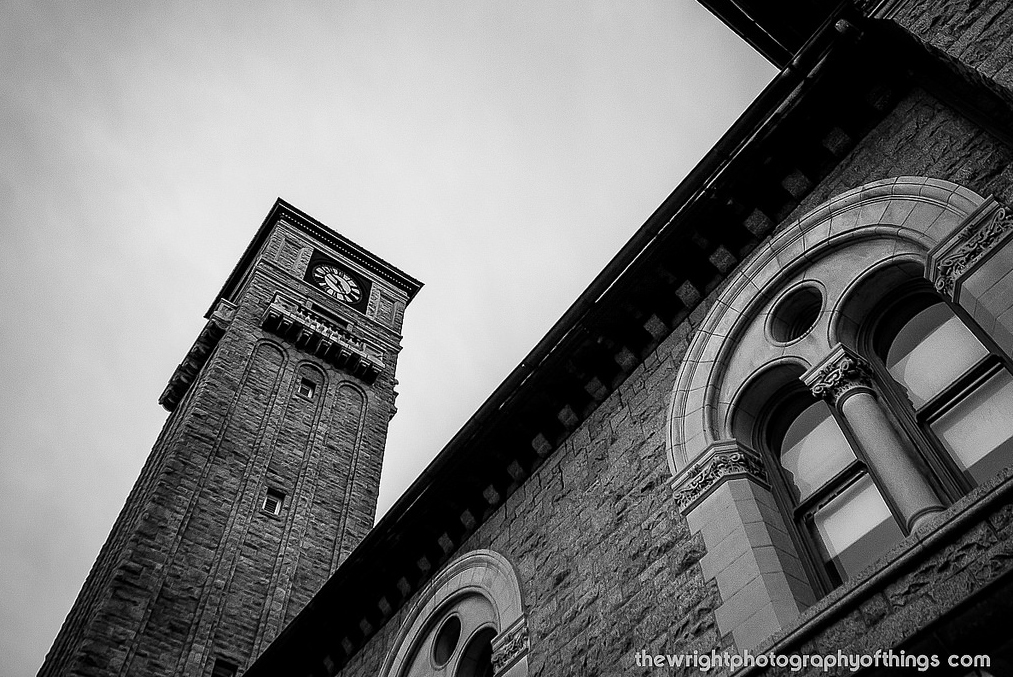 As the general public began to leave the train for the highway after World War II, and already unable to truly compete in the market with the Pennsylvania, the B&O gave up on its Royal Bluestreamliner on April 26, 1958, a day that came with much sadness for many loyal riders.

Mount Royal Station, however, continued to remain use for a few more years but closed permanently by the B&O on June 30, 1961. In 1964 the station was sold to the Maryland Institute College of Art (MICA).

In 1974 the structure was given the rare distinction as a National Historic Landmark and between 2005 and 2007 received a multi-million dollar restoration that returned it to its original appearance when it opened in 1896. 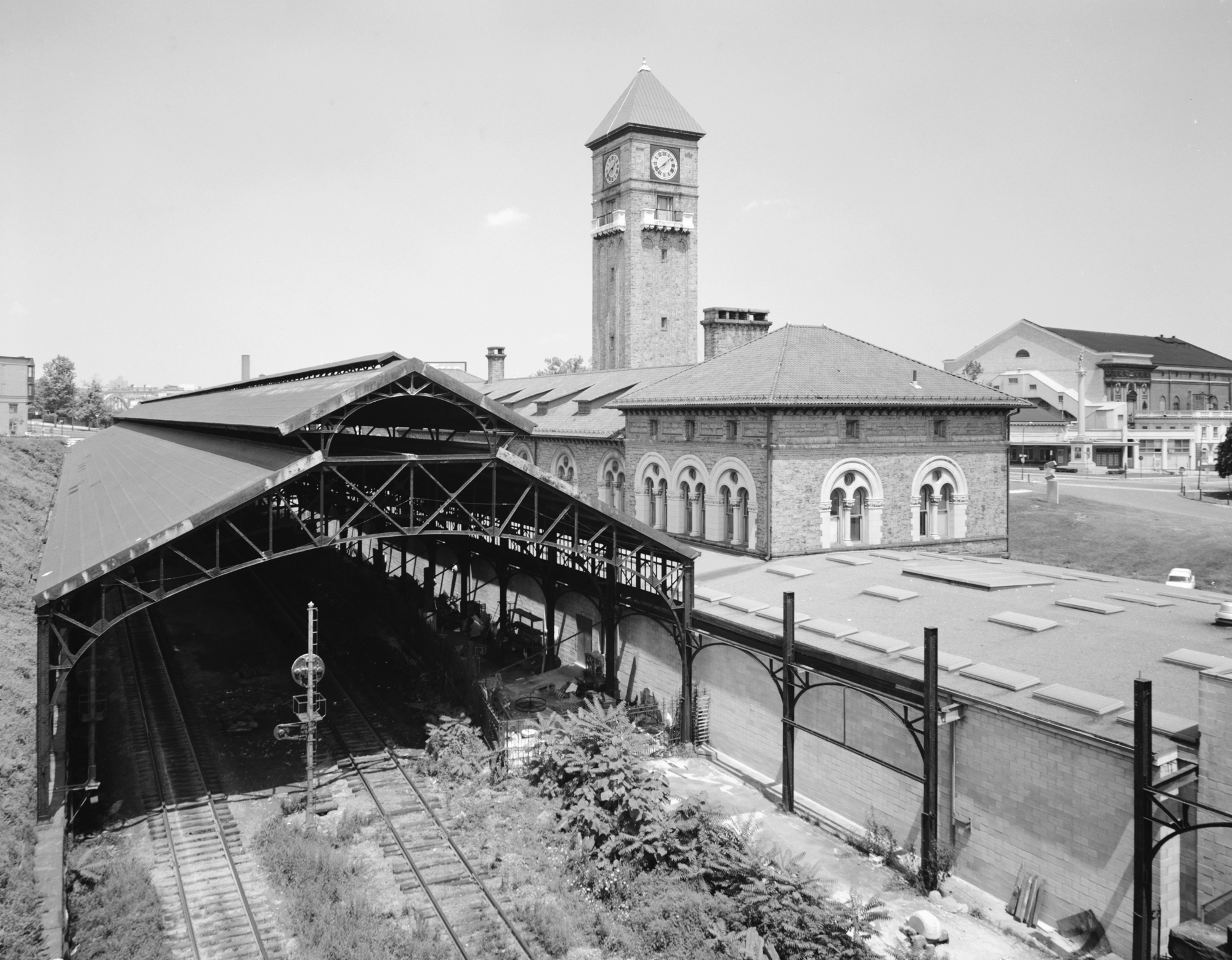 Today, while the building's famous shed hasn't seen passengers beneath it for decades CSX Transportation freight trains regularly pass through it on a daily basis making for a unique setup that you are unlikely to see perhaps anywhere else in the country.

For more information and history about the Baltimore & Ohio itself please click here.  This page provides an in-depth look at the venerable B&O from its many different passenger trains to various types of steam locomotives the road used over the years.

Additionally, you can read about notable locations along the system such as Sand Patch, M&K Junction, Thomas Viaduct, and others.